There have been significant advancements in surgical techniques in thoracoscopic lung segmentectomy, and the procedure has become more popular (1,2). In some cases, even the smaller subsegmentectomies are considered to acquire curability with less lung volume resected (3). We present the surgical procedure for combined multiple subsegmental anatomical lung resection according to the simulation of surgical margin and bronchovascular branching using three-dimensional (3D) computed tomography (CT) reconstruction (Figure 1). 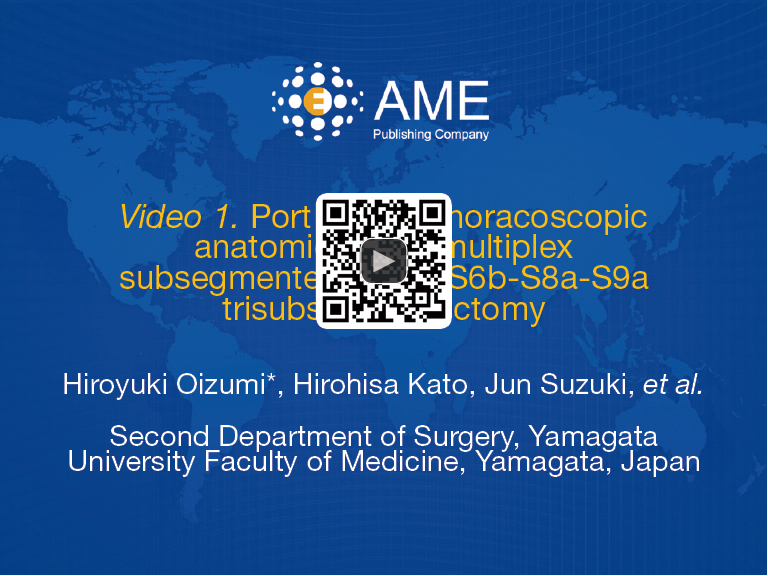 At first, resection of S6 total, S8a, and S9a was planned for this patient. However, the volume of S6a and S6c was estimated to be substantial; therefore, we finally decided to preserve them and perform the resection of S6a, S8a, and S9a according to the preoperative simulation of the surgical margin using 3D CT lung modeling. The bronchovascular branching pattern was also identified under precise assessment of 1-mm sliced axial images and 3D reconstruction of multidetector CT data.

Three flexible 5-mm and one 20-mm soft ports were inserted, and a 30° 5-mm rigid scope was used. We first dissected the A8a in the interlobar space. Then, we incised the lung parenchyma along the V6 and isolated the A6b and B6b. After dividing the subsegmental arteries, B6b and B8a were looped using a monofilament polypropylene thread. Slip knots were made using the threads outside the thorax, and bilateral lung ventilation was performed. During the lung ventilation, two ends of the threads were pulled, and the knots slipped to reach the bronchi without a knot pusher. Thus, the subsegmental air of the S6b and S8a was trapped, whereas the remaining lung collapsed; then, the inflation-deflation lines between the subsegments gradually become apparent during the dissection of hilar components such as venous branches running into the segments. Then, we further incised the lung parenchyma along the inflation-deflation line between the S6a and S6b and between the S8a and S8b; then, the peripheral lung was divided using staplers. After division of both intersubsegmental planes, the A9a becomes apparent, which was ligated and divided; then, the neighboring B9a was looped, and the slip knot was created using the same method. Whole-lung ventilation was again performed, and the B9a was ligated so as to keep the S9b subsegment inflated. We finally divided the lung parenchyma along the newly developed inflation-deflation line of S9b. We sutured the cut surface of S8b as there was a substantial amount of air leakage. Fibrin glue was sprayed at the remnant cut surface of S9b, S6c, and S6a. The operative time was 144 min. The blood loss was 13 mL. Air leakage was not observed, and the chest tube was removed at postoperative day (POD) 1. The final diagnosis was a lepidic adenocarcinoma. He lives well without recurrence 4 years after the operation.

Reports of early staged non-small cell lung cancers have been increasing due to the recent spread of high-resolution CT. For a small-sized pulmonary nodule containing nonsolid components, sublobar resection such as segmentectomy or wedge resection has become generally acceptable if sufficient surgical margins are secured. However, several tumors are located in between multiple segments, and when it happens, resection of multiple segments may be planned as a curative resection despite the tumor being not as large as the size of the segments.

We reported the thoracoscopic anatomical subsegmentectomy procedures for smaller pulmonary nodules as a measure to solve the problem of procedural difficulty in removing tumors that are located in the deeper parenchyma (3). The important technical process of anatomical subsegmentectomy is the precise identification of subsegmental bronchovascular structures and the securing of the sufficient surgical margin in the operation for malignant lesions. We developed the use of 3D reconstruction of multidetector row CT of the affected segments (2); however, it can only grasp the overview of the resected and unresected segments. To perform the correct anatomical subsegmentectomy procedure, precise investigation of axial image of 1-mm sliced volume data of CT is necessary to identify the detailed bronchovascular branching pattern. To obtain an adequate 3D reconstruction to distinguish the vascular components, the surgeon should instruct the radiology technicians to make an effort to obtain a difference between arterial and venous contrast enhancement of more than 80 HU. It is also important to keep the surgical margin reflecting the area of the subsegment and decide which subsegment to be removed and which subsegment to be preserved. Use of these detailed multidetector CT data facilitates the precise understanding of anatomy pre- and intraoperatively (1,2).

To keep and assess the sufficient surgical margin, it is also beneficial to maintain the resected segment inflated (5). For multiple combined subsegmentectomy, we isolate, encircle, and ligate the bronchus using the previously reported slip-knot method (6). In this patient in whom S6b-S8a-S9a subsegmentectomy was planned, we managed the B6b and B8a from the interlobar fissure, created the inflation-deflation line, divided the intersubsegmental plane, and finally managed the deeper located B9b and divided it using the same manner. This step-by-step maneuver of the bronchovascular structure is the point of the procedure.

Although some methods of visualizing the intersegmental plane (i.e., injection of dye into the target segmental bronchus using a needle or infrared visualization with intravenous injection of indocyanine green) have been reported, some processes may need special equipment or bronchoscopy skill of the anesthetist. The merit of creating an inflation-deflation line is that the demarcation line does not disappear once it becomes visible. Moreover, the method of inflating the affected segment is beneficial as it can maintain the real anatomical surgical margin, thereby achieving more accurate evaluation of resection margins. The jet ventilation method is developed for this purpose in thoracoscopic surgery or small thoracotomy (5). However, this method also needs an extra equipment and maneuver of a bronchoscope.

We use the slip-knot method to create the inflation-deflation line (6,7). It enabled the creation of an inflation-deflation line even in anatomical subsegmental resection of which the bronchial diameter is small, thereby enabling the combined subsegmental resection as presented in this article. This method only needs minimum dissection around the small-caliber bronchus, thus not only enabling the creation of a demarcation line but also omitting the use of a stapler for the division of the thinner fragile subsegmental bronchus.

This video was granted the Award of Best Demonstration in the 2017 Master of Thoracic Surgery—Video-assisted Thoracoscopic Surgery Video Contest.