Surgery vs. SBRT in retrospective analyses: confounding by operability is the elephant in the room

Anatomic lobar resection is the standard of care for medically operable patients with early-stage non-small cell lung cancer (NSCLC), while stereotactic body radiotherapy (SBRT) is preferred among patients deemed medically inoperable and those who wish to avoid surgery (1). The role of SBRT in the medically operable setting has emerged as an area of active research and debate in the thoracic oncology community in recent years. Several randomized trials comparing SBRT and surgery have been launched but subsequently closed early due to poor accrual. The only available randomized comparison to date comes from a pooled analysis of two such trials, STARS and ROSEL, which provocatively demonstrated improved 3-year OS with SBRT over surgery (95% vs. 79%), as well as comparable local, regional, and distant control between interventions (2). However, this analysis had a number of limitations including small numbers (N=58), the pooling of trial data, and low rates of minimally-invasive surgical techniques such as video-assisted thoracoscopic lobectomy (VATS). Nevertheless, while adequately powered randomized trials are awaited, the STARS-ROSEL analysis has generated further equipoise (3,4) [and some notable ire (5)] in discussions of SBRT for operable NSCLC patients.

Cornwell et al. (6) recently reported a single-center retrospective analysis comparing outcomes with SBRT vs. VATS lobectomy in a relatively homogenous veteran population. The study included 183 patients (94% male) with stage I NSCLC (127 VATS, 56 SBRT). Due to significant differences in baseline factors between treatment groups, including age, comorbidities, and FEV1, the key analysis focused on a smaller propensity score-matched cohort of 74 patients (37 per group). Within this propensity score-matched population, the authors observed significantly better outcomes with VATS lobectomy over SBRT, with 3-year overall and recurrence free survivals of 86% vs. 53% and 83% vs. 39%, respectively. Several strengths of the analysis are noteworthy, including a relatively modern cohort [2009–2014], high-quality surgery with VATS resection in all patients, reasonable SBRT marginal dose and fractionation schedules, and data on various cofactors including FEV1, smoking, hypertension, and comorbidity scores. Moreover, the investigators used multiple statistical techniques to account for imbalances in several known variables.

Despite the considerations above, the analysis by Cornwell et al., unfortunately, suffers from the substantial confounding common to similar retrospective comparisons of surgery and SBRT for early-stage NSCLC, namely that of medical operability (7). Medical operability and inoperability are determined on the basis of several clinical factors including pulmonary function, cardiovascular disease, performance status, age, and comorbidities, each of which can substantially influence outcomes even in the absence of cancer. Notwithstanding the propensity score matching to balance multiple cofactors, the SBRT cohort in the analysis for Cornwell et al. still included a remarkable 70% of patients deemed medically inoperable compared to 0%, by definition, in the VATS lobectomy cohort. The importance of this residual imbalance and resultant confounding cannot be overstated, as medically operable and inoperable patients exhibit widely different OS outcomes even when all patients receive the same treatment (8,9). To that end, the separation of the Kaplan-Meier survival curves and 3-year OS rates in this retrospective analysis of VATS lobectomy vs. SBRT (3-year OS 86% vs. 53%) appears similar to those observed in a study where all patients received SBRT and were stratified by medical operability and inoperability (3-year OS 77% vs. 43%) (Figure 1). Moreover, a meta-analysis found that differences in OS and disease-free survival between surgery and SBRT became non-significant when statistical models were adjusted for medical operability (10). Overall, the 70% medical inoperability rate in the SBRT cohort reported by Cornwell et al. reflects not only imbalances in unknown variables, common to all retrospective studies, but also a substantial uncontrolled imbalance in a known variable that independently drives survival outcomes. 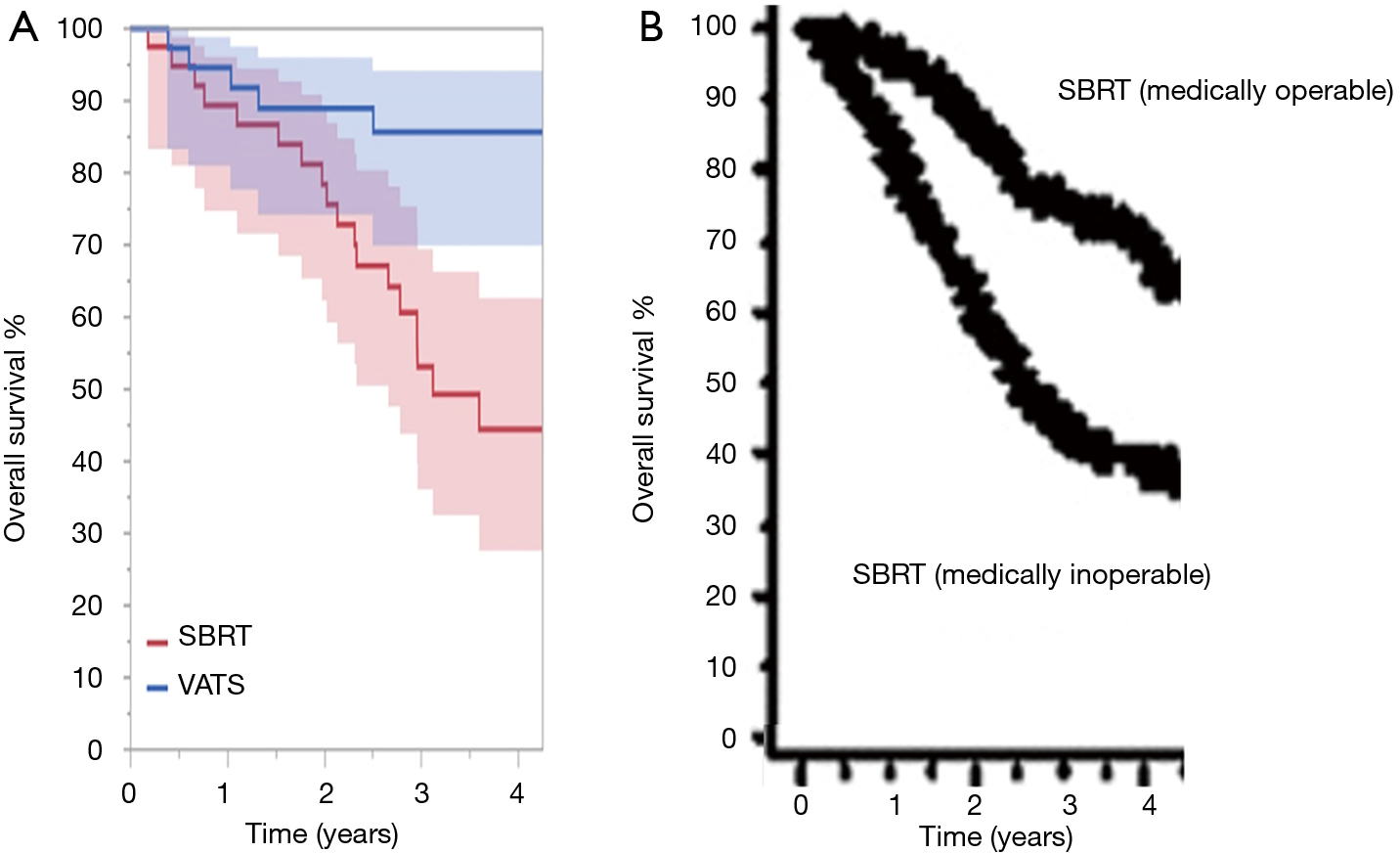 Figure 1 Overall survival for stage I NSCLC patients in retrospective comparisons of (A) VATS lobectomy vs. SBRT in a study by Cornwell et al. and (B) SBRT in all patients, stratified by medically operable vs. inoperable status in a study by Onishi et al. Adapted from Cornwell LD et al., J Thorac Cardiovasc Surg 2018;155:395-402, and Onishi H et al., J Thorac Oncol 2007;2:S94-10, presented with permission from the publisher.

Beyond confounding by operability, it is also notable that the surgical outcomes were somewhat better than expected in the retrospective analysis by Cornwell et al., whereas the SBRT outcomes were similar to somewhat worse than comparable analyses. For example, a large recent analysis from the ACOSOG-sponsored National Cancer Database (NCDB) including over 1,500 patients undergoing VATS lobectomy for clinical stage I NSCLC observed 30-day mortality and 3-year OS rates of 1.7% and approximately 77%, respectively (11), compared to 0% and 86% in this study. In contrast, a recent systematic review of SBRT outcomes found a 3-year OS of 60% across studies (12), compared to 53% observed by Cornwell et al., and one of the largest series to date of 676 SBRT patients reported a 3-year freedom from recurrence rate of approximately 73% (13), compared to 54% by Cornwell et al. One potential reason for the diminished SBRT outcomes observed by Cornwell et al. compared to some other series may be related to underlying differences in a veteran, predominately male population treated with SBRT. Technical considerations regarding SBRT delivery in this study include delivery of treatment on consecutive days, which has been associated with increased toxicity (14) and decreased tumor control (15) in some series, and the potential for adequate prescription dose to the tumor margin but inadequate maximal tumor dose to the isocenter (16) (unreported in the study). From a data analysis standpoint, the more frequent surveillance imaging in the SBRT compared to the VATS cohort also makes earlier detection of progression events a source of bias in time-to-event analyses.

Due to confounding by indication in early-stage NSCLC (i.e., surgery for operable patients, SBRT for inoperable patients), randomized trials will likely represent the only suitable means of comparing these modalities. While data from ongoing trials are awaited, existing data from prospective trials of SBRT in medically operable patients are informative. Three-year OS rates from two such trials, RTOG 0618 and JCOG 0403, are depicted in Table 1 alongside corresponding rates from contemporary high-quality surgical trials, ACOSOG Z4032 and ACOSOG Z0030, and from the STARS-ROSEL analysis. Importantly, these rates appear comparable between SBRT and surgery and provide sufficient justification for enrollment on ongoing randomized trials (e.g., NCT02468024, NCT01753414, NCT02984761, NCT02629458).

Overall, the study by Cornwell et al. provides descriptive data regarding the observational outcomes of two distinct veteran populations: medically operable patients undergoing VATS lobectomy and primarily medically inoperable patients undergoing SBRT. Despite various statistical approaches to match patients by other cofactors, the persistent issue of operability prevents extrapolation of the comparative SBRT outcomes to medically operable populations. Confounding by indication—in this case operability—is recognized as a critical form of bias that cannot be fully resolved by statistical adjustment (20). In our opinion, this assertion is less of a critique of the otherwise thoughtful analysis by Cornwell et al. and numerous similar efforts (21) as it is a fundamental reality of observational research in this setting. Greater awareness and acknowledgement of the confounding by operability inherent to retrospective analyses of early-stage NSCLC may facilitate more informed shared decision-making between providers and patients.