Pulmonary lobectomy is a common surgical intervention with consensus support as a standard procedure for curable treatment of primary non-small cell lung cancer (NSCLC) (1). However, resection of lung parenchyma impairs some reserves of lung function, possibly leading to inability to tolerate exercise because alveolar units cannot be reproduced to fully compensate for lost lung volume. Vital capacity (VC) and forced expiratory volume in 1 second (FEV1) are representative indexes of lung function, and are routinely measured before surgery to select suitable candidates for pulmonary lobectomy. Therefore, surgeons are required to predict loss of lung volume quantified by these measures, and also subsequent recovery caused by morphological expansion of the remaining lung.

The aim of this study was to compare pre- and postoperative values of VC and FEV1 in the late postoperative phase (>1 year after surgery) in a comparatively larger sample size of patients who underwent pulmonary lobectomy. In addition, patient characteristics, including comorbidities that potentially affect lung function after lobectomy, were also investigated.

The present study included patients who underwent pulmonary lobectomy through thoracotomy with antero-axillar incision primarily for NSCLC or other pulmonary diseases at Kurume University Hospital (Kurume, Japan) or Oita Prefecture Saiseikai Hita Hospital (Hita, Japan) between March 2000 and June 2014. Patients older than 80 years of age, with poor physical activity (Eastern Cooperative Oncology Group performance status equal to or worse than 2), and those who received perioperative chemo- or radiotherapy, except postoperative oral uracil and tegafur, were excluded because of the potential for inadequate performance in spirometry test due to physical dysfunction (6). In addition, patients who were lost to follow-up were excluded; ultimately, 112 patients were enrolled in the present analysis. Histological subtypes of NSCLC were assigned according to the classification of the World Health Organization (7). The study was approved by the Institutional Research Ethics Committee of Kurume University (No. 17065) and Oita Prefecture Saiseikai Hita Hospital (No. 26-11), and all patients provided informed written consent to participate.

In which n and b are the numbers of obstructed segments and total segments, respectively (5). In addition, decreasing rate, which was defined as the decrease in the proportion of observed postoperative lung volume compared with preoperative lung volume, was similarly calculated as follows:

Patient characteristics potentially effecting a decrease in pulmonary function were also analyzed and included sex, smoking habits, resected lobe, tumor histological subtype, interval between pre- and postoperative measurement, and comorbidities. In the present study, the presence of chronic obstructive pulmonary disease (COPD) as a comorbidity was defined according to the Global Initiative for Obstructive Lung Disease (GOLD) criteria (11).

Statistical comparisons between the resected lobe and clinicopathological features were evaluated using Wilcoxon rank sum tests, paired t-tests, and Fisher’s exact tests. The paired t-test was performed to compare preoperative and postoperative lung volume, as well as predicted and observed decreasing rates of VC and FEV1. Simple regression and stepwise multiple regression models were used in univariate and multivariate analyses to examine the influence of each characteristic in the observed decreasing rate in VC and FEV1; P<0.05 was considered to be statistically significant. Statistical analyses were all performed using JMP Pro version 11 (SAS Institute Inc., Cary, NC, USA).

Table 1 summarizes the characteristics of the 112 patients enrolled in the present study according to the lobe that was resected. Subjects included 64 males and 48 females, with a mean age of 65.1 and 68.9 years at pre- and postoperative measurement of lung function, respectively. There were 61 (54.5%) non-smokers and 51 (45.5%) patients who had ever smoked, with a mean Brinkman Index of 469, which is defined as (number of cigarettes per day) × (number of years for which a person smoked) (12). Comorbidities included COPD in 33 (29.5%) patients, hypertension in 34 (30.4%), cardiovascular disease in 28 (25.0%), diabetes mellitus in 13 (11.6%), and bronchial asthma in 9 (8.0%). There were no statistical differences in clinicopathological features of patients with regard to the resected lobe. 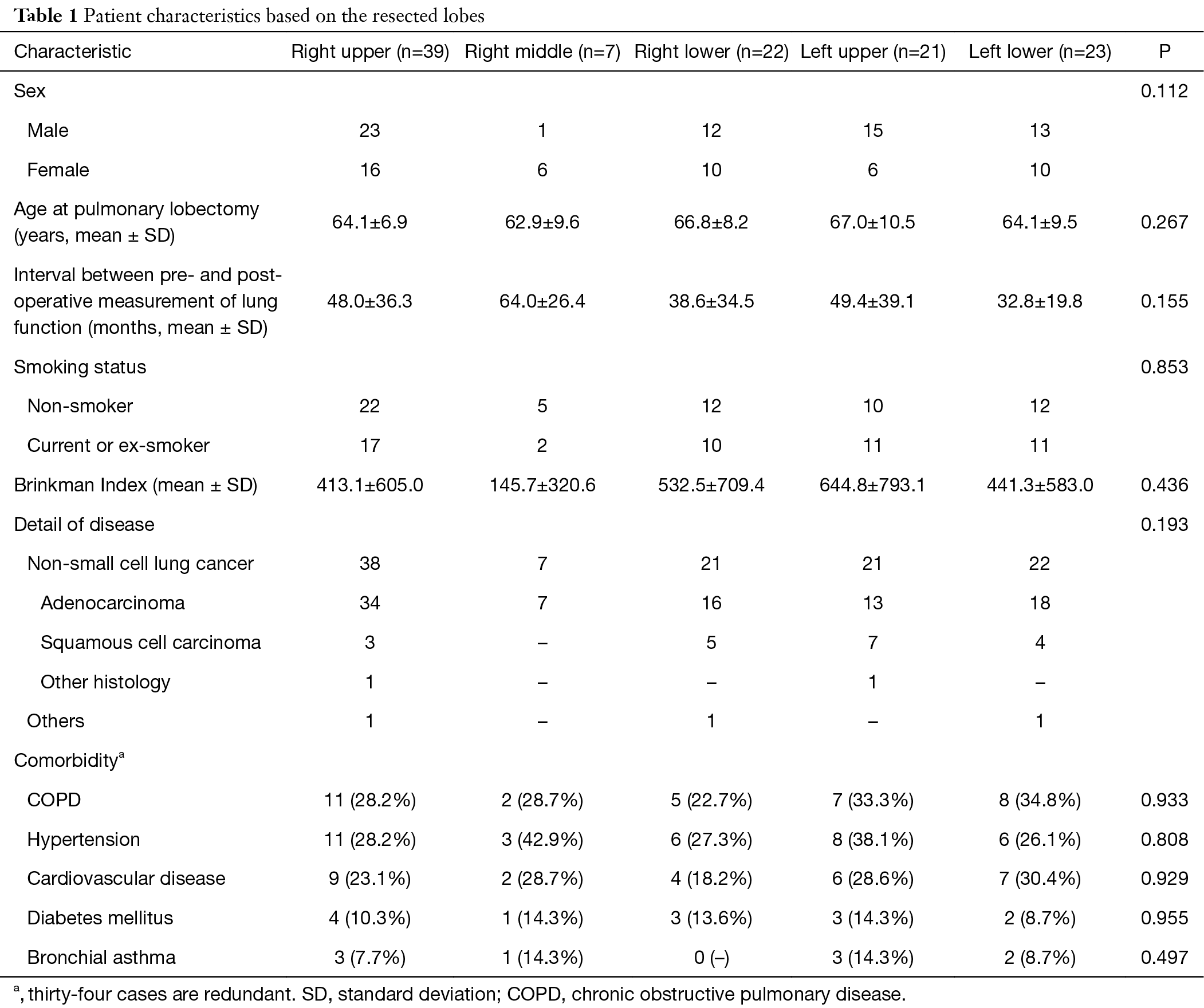 Table 1 Patient characteristics based on the resected lobes
Full table

Comparison between pre- and postoperative lung function after pulmonary lobectomy

Discrepancy between predicted and observed lung function after pulmonary lobectomy

The actual decreasing rate of VC in the late postoperative phase was overestimated in patients who underwent RU, RL, LU, and LL (P=0.044, P<0.001, P=0.028, and P=0.003, respectively) (Table 3). In contrast, a substantial decreasing rate in FEV1 was overestimated only in patients who underwent RL and LL, differences that were statistically significant (P<0.001 and P=0.006, respectively) (Table 3).

Selected patient characteristics were assessed to determine whether any influenced the decreasing volume of VC and FEV1 (Table 4). In the analysis of VC, none of the variables affected the decreasing volume in univariate analysis, which precluded their inclusion in further multivariate analyses. In FEV1, the interval between pre- and postoperative measurement of lung function, and the presence of COPD, were determined to be significant factors affecting lung volume loss (P=0.022 and P=0.017, respectively). In the multivariate analysis, only the presence of COPD was identified as an independent factor influencing lung volume loss (P=0.028). 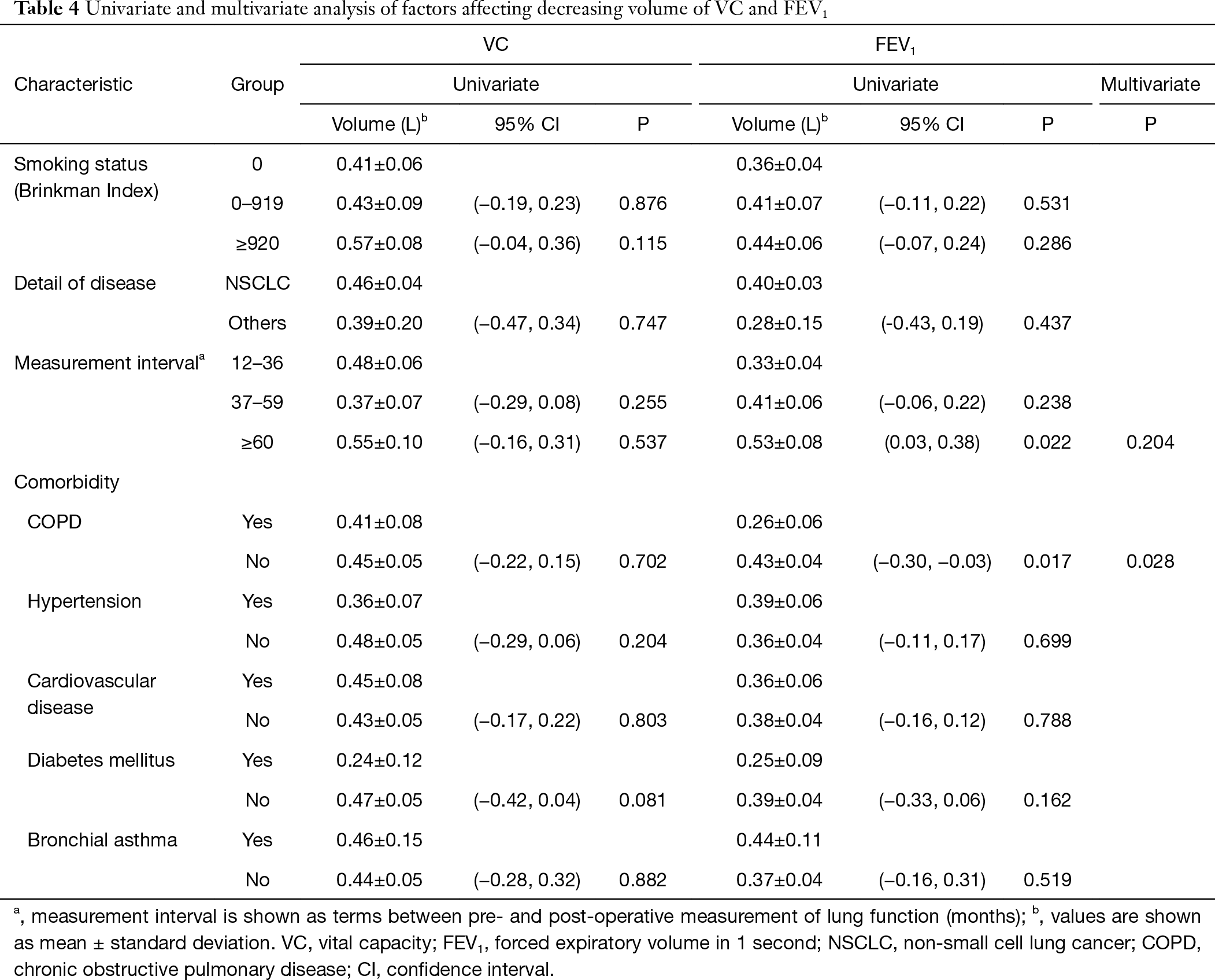 In the present study, we demonstrated that VC and FEV1 clearly decreased after pulmonary lobectomy in the late postoperative phase (>1 year after surgery). However, postoperative lung function in terms VC was better preserved than predicted in patients who underwent RU, RL, LU, and LL. In addition, patients who underwent RL and LL exhibited significantly better preservation of FEV1 than predicted compared with those who underwent other procedures. The presence of COPD was identified as an independent predictor of better preservation of FEV1; specific profiles possibly affecting VC, however, were not determined. These results are useful, and can be efficaciously used in the management of therapeutic strategies for NSCLC, particularly in decisions regarding surgical procedures.

Predicted postoperative FEV1 evaluated using spirometry is one of the measurements commonly applied to the prediction of postoperative mortality and morbidity after lung resection; therefore, it is widely used to select suitable candidates for pulmonary lobectomy (10,13). Several approaches have similarly been adopted in recent years to predict residual lung function after pulmonary lobectomy, such as bronchial arteriography, pulmonary arteriography, pulmonary blood flow scintigraphy, and computed tomography-based lung volumetry (13-16). In contrast to these modalities, spirometry testing can be performed easily because of its long-standing and widespread availability (9). To further advance the understanding of processes that occur in the remaining lung after pulmonary lobectomy, additional studies investigating the correlation between results measured using spirometry testing and other modalities are required.

Patients who underwent RL and LL exhibited significantly better preservation of both VC and FEV1 than predicted >1 year after pulmonary lobectomy. Similarly, Ueda et al. reported that patients who underwent lower lobectomy exhibited significantly better lung function recovery than those who underwent upper lobectomy at 6–12 months after surgery, even though lower lobectomy required a volumetrically larger resection than upper lobectomy based on computed tomography-based functional lung volumetry and spirometry tests (20). They speculated that this result could be attributed to a compensatory response after lower lobectomy, which appeared to be more robust rather than that after upper lobectomy. Nevertheless, explanation for these results may be supported by some studies reporting that the compensatory inflation of the remaining lung after lobectomy was accompanied by increased pulmonary ventilation and perfusion of the remaining lung (21). Another study, involving adult dogs that included microscopic and radiologic evaluation, also demonstrated that compensatory expansion of the remaining lung is not simply a consequence of hyperinflation of the pre-existing alveolar septal tissue, but is accompanied by some increase in the vital lung tissue (3,22). Although further studies are needed to identify detailed mechanisms of this outcome, it is highly likely that lung function recovery of FEV1 in patients who undergo RL or LL could be expected to be better preserved than that in those who undergo other procedures.

Univariate and multivariate analysis indicated that comorbid COPD was an independent favorable factor for the preservation of FEV1 in the late postoperative phase. Similarly, Baldi et al. reported that patients with mild to severe COPD exhibited better preservation of lung function in the late phase after pulmonary lobectomy than healthy patients (23). To investigate the basis of this result, we performed an additional analysis and demonstrated that the observed/predicted ratios of FEV1 were higher in COPD patients compared with non-COPD patients. This finding is consistent with previous studies reporting minimal loss―or even improvement―of pulmonary function after lobar resection in COPD patients. On the other hand, other authors have speculated that a ventilation-perfusion relationship may be associated with this outcome (24,25) and, therefore, patients with comorbid COPD can expect better preservation of FEV1 after pulmonary lobectomy in the late postoperative phase.

There were several limitations in this study. First, although we defined the lung function after lobectomy in the late postoperative phase as those >1 year following surgery, the interval between pre- and postoperative measurement of lung function varied among patients. This was caused by operational inconsistencies in our clinical follow-up, in which spirometry tests after surgery are not routinely performed. Further studies, including measurements of lung function in a synchronized, rigorously defined, period in the late phase following pulmonary lobectomy, are necessary to confirm our results because statistical biases may have originated from factors such as aging and the natural progression of underlying COPD. Second, this study did not analyze consecutive patients who underwent pulmonary lobectomy because some were lost to follow-up. To avoid a statistical bias due to patient selection, a prospective case series is necessary in future studies.

Our results demonstrated that lung function after pulmonary lobectomy inevitably decreased compared with the preoperative measurements, even after the recovery of lung function reached a peak after surgery. Furthermore, better preservation of respiratory function in the late postoperative phase can be expected in patients scheduled for RL and LL, as well as those with comorbid COPD.

Ethical Statement: The study was approved by the Institutional Research Ethics Committee of Kurume University (No. 17065) and Oita Prefecture Saiseikai Hita Hospital (No. 26-11), and all patients provided informed written consent to participate.