Acute respiratory distress syndrome (ARDS) is one of the leading causes of mortality in the intensive care unit (ICU) (1,2), with a mortality reaching 46% in its most severe forms (1). In an attempt to decrease this high mortality, over the past decade, clinicians have increasingly been using extracorporeal membrane oxygenation (ECMO). This has largely been stimulated by improvements in ECMO technology (3), and by results of the CESAR trial (4) and the positive reports of the use of ECMO in patients with influenza A (H1N1) (5,6).

However, ECMO is an expensive technology and is associated with a large number of life-threatening complications (7), long term physical and psychological sequelae, and a significant impact on patients’ quality-of-life (8). For these reasons, being able to identify which patients are more likely to benefit from this therapy—and perhaps more importantly, those likely not to benefit—is essential in the decision-making process. A number of scoring systems have been published to help clinicians make the decision of who and when to apply ECMO (9-12) (Table 1). In this paper, we briefly review a recently published paper by Hilder et al. (13), and assess its utility in the context of other published scoring systems (Table 1). 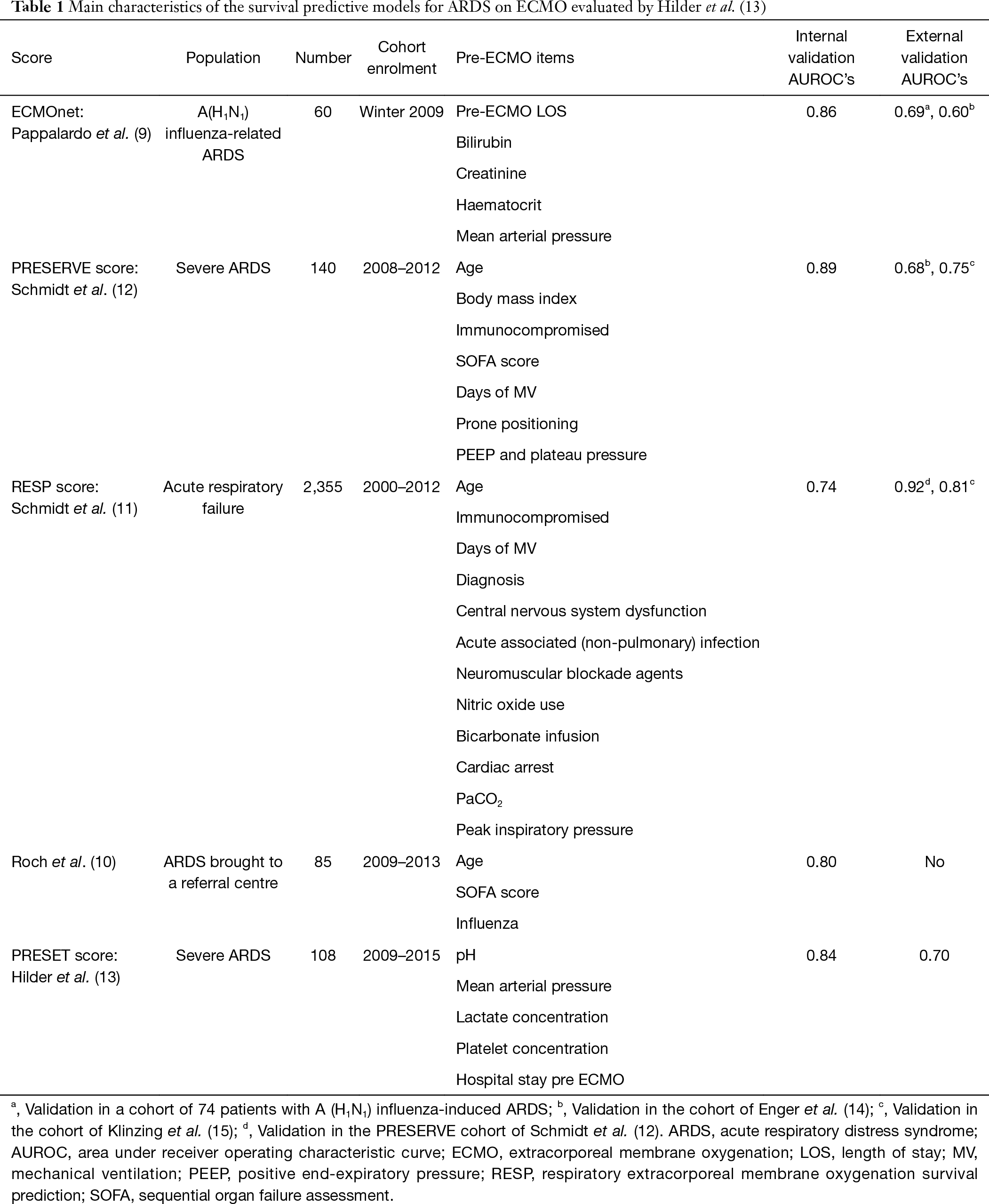 Heterogeneity of ARDS etiologies and inconsistent statistical methodology, motivated Hilder et al. (13) to assess the performance of several previously published predictive survival models (9-12) using a German cohort of severe ARDS patients. This “derivation cohort” was also used to create a new, survival predictive model which they called the PRESET-Score (PREdiction of Survival on ECMO Therapy-Score). In addition, this PRESET score was validated in two independent cohorts.

The PRESET-Score is based on a cohort of 108 patients with severe ARDS patients who were treated with veno-venous ECMO (vv-ECMO). The authors performed a univariate analysis using demographic, diagnostic, clinical, haemodynamic and respiratory variables, and associated organ dysfunction prior to ECMO initiation. From the univariate analysis they identified five significant variables which were independently associated with in-hospital mortality: lactate concentration, hospital length of stay before ECMO, mean arterial pressure, platelet count, and arterial pH. These significant variables were converted into categorical variables using the relative contribution of each beta parameter to build the PRESET-Score [see Table 4 of original paper (13)]. They then identified three risk classes with increasing mortality: I, II and III (26%, 68%, and 93%, respectively). The area under the curve (AUC) of the PRESET-Score was 0.823 (95% CI: 0.74–0.90; P<0.001) in this derivation cohort.

The performance of the PRESET-Score was reassessed using an “internal” validation cohort which prospectively included 82 severe ARDS patients from the same hospital, and in an external cohort of 59 ARDS patients from the Marien hospital in Osnabrück, Germany. The performance, assessed by AUC, of the PRESET-Score in these cohorts was 0.84 (95% CI: 0.76–0.93; P<0.001) and 0.70 (95% CI: 0.56–0.83; P<0.008), respectively. It is important to note however that the performance of the PRESET-Score in the external cohort was similar to the scores obtained using the ECMOnet score (9) (0.70) and of the RESP-score (11) (0.65) in the derivation cohort.

Although the performance of the PRESET-Score seems promising, it is worth noting that these findings result from the unusual characteristics of the study cohorts, the type of variables collected, and the poor outcome of these patients. First, 38% of the patients were immunocompromised and 20% had a cardiac arrest prior to initiation of ECMO in the derivation cohort, compared to 5, and 9%, respectively, in the RESP-score cohort (11). These significant differences reflect a higher severity in global critical illness in the PRESET cohort where mean Sequential Organ Failure Assessment score and Simplified Acute Physiology Score II were 14 and 63, respectively.

Second, the authors did not report direct assessment of pulmonary mechanics (e.g., driving pressure or static compliance) before ECMO. High pre-ECMO PaCO2, or high plateau pressure have been noted as major risk factors of mortality in other survival predictive models (11,12). Consistent with other models, profound refractory hypoxemia, which is one of the first indications for vv-ECMO, did not impact short-term survival. Hilder et al. also reported inconsistent pre-ECMO management of neuromuscular blockers or prone positioning use, which precluded assessing their impact on predicted survival.

Third, only 17% of patients with ARDS had H1N1 influenza. The small proportion of patients with this ARDS etiology in the PRESET derivation cohort, commonly associated with a better outcome (5), should be taken into account when its performance is compared with other scores, like the one from the ECMOnet study (9).

Lastly, although no differences in patients’ characteristics were reported between the derivation and the internal cohort, major differences were noted between the derivation and the external cohort. Notably, the very high mortality (62%) of the derivation cohort compared with other international cohorts on vv-ECMO (11,12) is intriguing, whereas the mortality of the external validation cohort was closer, but still higher, than other studies in the field (11,12,16). Such increased mortality with ECMO-treated ARDS patients has already been reported (17). Karagiannidis et al. elegantly reported that in a high-income country like Germany, the use of vv-ECMO has been rapidly increasing since 2007, leading to an in-hospital mortality of 58% in 2014 (17). Hilder et al. argued that one reason that they had a low survival (38%) in their cohort was that they used very liberal criteria for instituting ECMO, and thus included patients with a high probability of death, or those who would have been denied ECMO if Extracorporeal Life Support Organization (ELSO) criteria had been followed. Consequently, the parameters included in the PRESET-Score were more related to shock and multiorgan failure rather than to the pulmonary characteristics and ARDS severity. Thus, four out of the five PRESET-Score variables (i.e., pH, lactate, mean arterial pressure and platelet count) were related to extrapulmonary organ dysfunction. As for the platelet count, the authors acknowledged the potential influence of the high proportion of immunocompromised patients, who are known to have a poorer outcome on ECMO (18). Interestingly, in a recent study focusing on ECMO-treated ARDS patients in immunocompromised patients, multivariate analysis retained lower platelet count as an independent pre-ECMO predictor of 6-month mortality as well (18).

The last variable included in the score was hospital length of stay before cannulation, where a greater ICU length of stay or a longer duration of mechanical ventilation before ECMO, were significantly associated with increased mortality in other survival predictive models (11,12,14,19).

Hilder et al. specifically reported that no respiratory variable was associated with outcome. This may be due to two factors. First, they did not include respiratory system compliance or driving pressure as variables in their model. Arguably these would be the best variables to include to address the severity of the underlying lung injury. Second, as discussed above, it is likely that the extreme severity of the population included in their study may have masked the impact of the ARDS characteristics and intrinsic lung parenchyma impairment. As such, we would argue that the PRESET-Score is more applicable to a cohort of patients whose severity of illness and outcome is largely determined by non-pulmonary factors. Indeed, one might argue that the PRESET-Score is an extrapulmonary predictive survival model that could probably be applied to any critically ill patient, even out of the context of ECMO.

All ECMO survival models published so far have major limitations such as small and restricted derivation cohorts (9,10), lack of pre-ECMO ventilation variables (13), or lack of external validation (10). To make major advances in this field we believe that it will be necessary to build these models using much larger data sets—at least an order of magnitude larger than have been used in previous models, which will likely require a multi-center collaboration.

By using an appropriate statistical methodology and selecting five simple extrapulmonary variables, the PRESET-Score offers a good complementary tool to other prediction scores. Expanding interest in creating new predictive survival models in the context of ECMO should not suggest that they can be used as substitutes for clinical judgement. They should be viewed as decision aids to help the thoughtful clinician make the often-difficult decision of whether to initiate ECMO in a very sick patient.

Conflicts of Interest: Dr. Schmidt has received honoraria for lectures from Maquet Gettinge and Dräger. Dr. Slutsky has been a paid consultant to Baxter, Maquet Gettinge, and Novalung/Xernios. Dr. Montero has no conflicts of interest to declare.