Editorial based on: “Risk of dementia in adults with congenital heart disease: population-based cohort study”

The cardiovascular system is one of the first to develop in the human fetus. Due to its complexity, cardiogenesis is a process susceptible to mistakes. Congenital heart disease (CHD), therefore, is a common human birth defect with a prevalence of 5 to 12 per 1,000 live births (1). Over the last decades, treatment of CHD has improved tremendously and nowadays, almost all infants with CHD reach adulthood. The adult population with CHD constitutes the fastest growing segment of the CHD population, already outnumbering children with CHD (2). Since CHD has become a lifelong condition, focus of attention has gradually shifted from preventing mortality towards optimizing treatment outcome and long-term consequences of CHD (3).

Although the study is a large and well-performed population-based cohort study, it has important limitations. The study population consists of adults ≥30 years of age who were born between 1890 and 1982. This birth period represents an era with limited treatment opportunities for CHD. In the Netherlands, for example, the first open heart surgery using a cardiopulmonary bypass was performed in 1957. The age criterion and birth period have several consequences. First, it may have induced selection bias as only the most-healthy subjects that reached 30 years of age were included. Second, the majority of the study population had mild to moderate CHD (atrial septal defects, ventricular septal defects, and patent ductus arteriosus). Considering these limitations, it is difficult to extrapolate the results directly to individuals diagnosed with CHD today. However, the study highlights the need for future research addressing long-term consequences of CHD and potential etiological factors for dementia in CHD.

The association between dementia and CHD is a relatively new field of interest. While the association has been mentioned before (1), Bagge and colleagues were one of the first to actually study it in a large cohort (4). Therefore, any theory on etiology remains speculative. We put forth two different concepts. First, individuals with CHD might be more prone to suffer from other well-known cardiovascular risk factors for dementia, such as heart failure, hypertension, coronary artery disease and stroke (5,6). Bagge and colleagues, however, did not find a specific association between vascular dementia and CHD (4). Second, brain injury might lead to a diminished brain reserve in individuals with CHD. Brain reserve is the ability of the brain to tolerate age- and disease-related pathology without developing obvious symptoms or signs of the disease (7,8). Several studies have reported that many elderly people with extensive dementia-related brain lesions do not clinically manifest cognitive impairment, suggesting that structural and functional compensations are able to buffer the effects of neuropathology (7,8). In individuals with CHD, this capacity might be diminished due to structural as well as acquired brain injury. The fact that Bagge et al. found that adults with CHD more often suffered from early onset dementia and that the increased risk of dementia was also present in adults without acquired cardiovascular disease support this theory (4).

Brain injury is common in individuals with CHD. Prior to surgery up to 52% show signs of brain injury on MRI (9). Postoperatively this increases up to 78% (10). The etiology of brain injury in individuals with CHD is multifactorial. One major contributor to brain injury might be a disruption of genetic pathways. Development of the heart and brain occur simultaneously in the human fetus and several genetic pathways are shared, such as sonic hedgehog, notch, jagged, NKx2.5, fibroblast growth factor beta, and retinoic acid (11-13). A disruption in one of these pathways could affect organogenesis of both organs. Recently, several de novo mutations in different genes have been identified in infants with non-syndromal CHD (14). Furthermore, Homsy et al. identified de novo genetic mutations in infants with CHD and neurodevelopmental impairments. A key finding was that infants with CHD and neurodevelopmental impairments have mutations particularly in genes that are expressed in both heart and brain, suggesting a common genetic origin for CHD as well as brain anomalies (15).

Another major contributor to brain injury in CHD may be hemodynamic alterations. Due to intracardiac or extracardiac mixing of oxygenated blood, or due to outflow tract obstructions, cerebral oxygen and nutrient supply could be impaired in individuals with CHD (9). These hemodynamic alterations have been reported both prenatally and postnatally. Prenatally, fetuses with CHD often have abnormal Doppler flow patterns. The pulsatility index of the middle cerebral artery and the cerebroplacental ratio are often lower, while the pulsatility index of the umbilical artery is often higher in comparison with healthy fetuses (9,16). This phenomenon, also called brain sparing, is a (patho)physiological response to acute or chronic hypoxia and has been associated with adverse outcome (17). Postnatally, neonates with CHD often have low cerebral oxygen saturation values prior to surgery, during surgery, and following corrective surgical procedures (9,18,19). Low cerebral oxygen saturation has also been associated with worse neurodevelopmental outcome (20).

Both a disruption of genetic pathways and hemodynamic alterations that affect cerebral oxygen and nutrient supply might lead to a delay in cerebral development. In fact, signs of impaired brain maturation are present in fetuses as well as neonates with CHD. In up to 39% of the cases, fetuses with CHD have mild ventriculomegaly or increased extra-axial cerebrospinal fluid spaces (9). In addition, they often have smaller head circumferences, smaller brain volumes, lower total brain weights and a sulcation delay of up to 4 weeks (9). Furthermore, cerebral metabolism is altered in fetuses with CHD, including an increased myo-inositol/choline ratio, decreased n-acetylaspartate/choline ratio, and decreased choline/creatinine ratio (9). All are signs of delayed cerebral maturation. Postnatally, most of these signs of impaired cerebral maturation persist. Neonates with CHD also have smaller head circumferences, smaller total brain weights and volumes, and an altered cerebral metabolism (9). Total maturation scores are lower than reported normative data and correspond to a delay in maturation of up to four weeks (9).

Impaired cerebral maturation might in turn lead to an increased vulnerability of brain tissue for hypoxic-ischemic events during both the prenatal period and early postnatal life. The young developing brain acquires characteristic patterns of injury that reflect the vulnerability of specific cell populations and timing of injury (21). In preterm infants, white matter injury (WMI) is one of the most commonly observed lesions, whereas term infants more often have injury to grey matter or neuronal structures (21,22). The proposed mechanism for WMI in preterm infants is a cellular maturation arrest of progenitors of oligodendrocytes that predominate in white matter during the third trimester. Early-lineage oligodendrocytes have less defense mechanisms (i.e., anti-oxidant capacity) to insults such as hypoxic-ischemic events in comparison with more mature oligodendrocytes and other cell lines (astrocytes, microglia and axons) (22). The most common type of brain injury in infants with CHD is WMI. This may be due to a combination of a delayed brain maturation leading to a vulnerable white matter and repeated episodes of hypoxia and/or ischemia during early life. In Figure 1, we present our theory on the etiology of dementia in individuals with CHD. 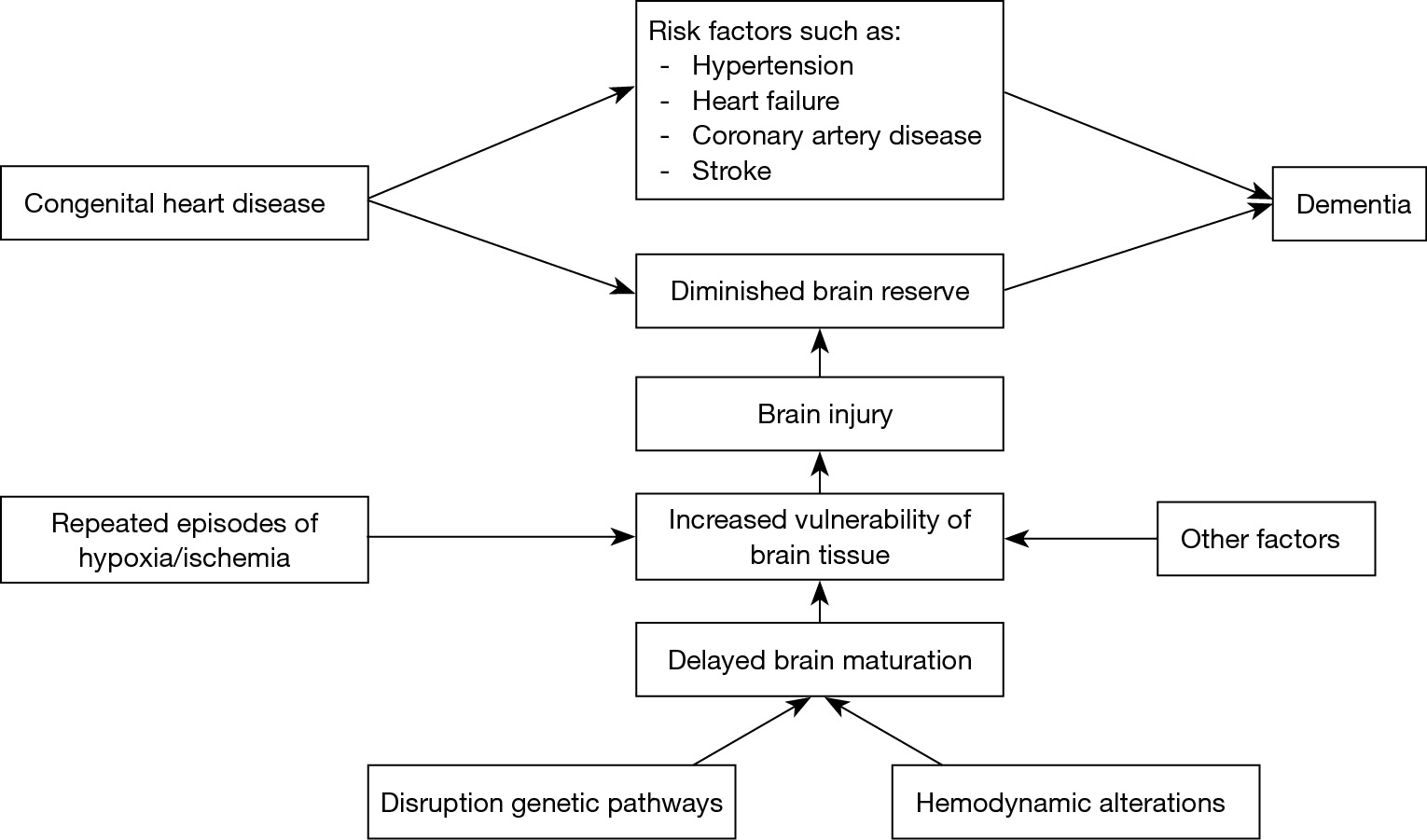 Figure 1 Theory on the etiology of dementia in adults with congenital heart disease.

In summary, with increasing survival rates, long-term consequences of CHD are becoming more and more relevant. Bagge and colleagues show that one of these long-term consequences of CHD may be an increased risk of dementia. We speculate that this is caused either by an increased prevalence of well-known cardiovascular risk factors for dementia, or that it is due to a diminished brain reserve. A disruption of genetic pathways and/or hemodynamic alterations may cause an impaired brain maturation leading to an increased vulnerability of brain tissue for hypoxic-ischemic events. Repeated episodes of hypoxia and/or ischemia during the prenatal period and early postnatal life, in turn, cause brain injury that leads to a diminished brain reserve and subsequently a higher risk of dementia. The study by Bagge and colleagues highlights the need for future studies addressing long-term consequences of CHD, including the etiology of dementia in individuals with CHD. These studies should also include prenatal and early postnatal life as the increased risk of dementia might originate during these periods.