Secondary sternal tumors (SSTs) are uncommon and, except for breast cancer SSTs, limited data on surgical management of metastatic sternal malignancies have been published. Sternal resection with concomitant reconstruction of the anterior chest wall defect was recommended for primary sternal tumors as curative, and proposed for SSTs as mainly palliative intent option (1,2). Five-year overall survival (OS) of 0% to 73% in patients undergoing sternal resections for SSTs has been reported (1). The purpose of this study was to examine the perioperative outcomes and postoperative OS in patients undergoing extensive full-thickness sternal and/or anterior chest wall resections for SSTs.

The records of 10 consecutive patients, who between January 2000 and December 2016 underwent resection of SSTs involving the sternum and/or anterior ribs at single institution, were reviewed. The study was granted the approval of the trust’s Institutional Review Board (registration number 126_18 Bc). Individual patient consent for this retrospective observational study was not required.

Surgery was indicated in patients with solitary metastasis in whom the resection was likely to increase survival (curative intent). Patients with advanced primary tumor disease and/or skin ulceration from concomitant sternal metastasis or local tumor invasion were considered candidates for palliative intent resection. Resectability of the sternal tumor, based on its location and extent was assessed pre-operatively by computed tomography (CT) (Figure 1), and in recent patients by 18-fluorodeoxyglucose positron-emission tomography (18-FDG PET). Cardiorespiratory fitness was routinely assessed in all surgical candidates. 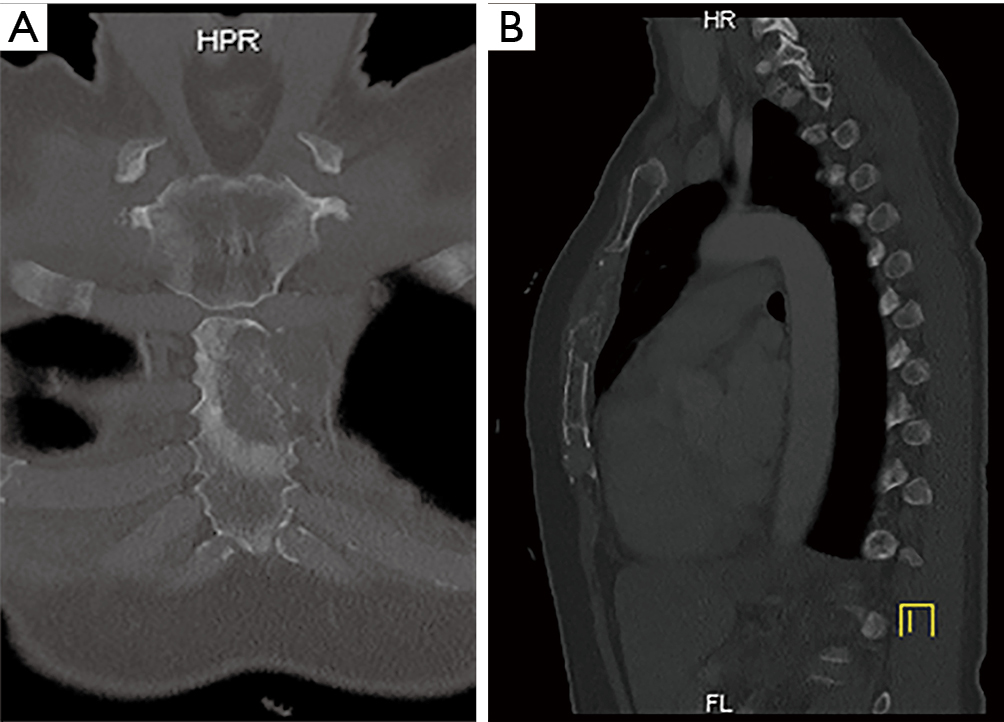 There were no established patient selection criteria for sternal resections. Before the surgery was offered, all patients were presented at the multidisciplinary tumor conference, where the treatment options were discussed.

All sternal resections and reconstructions were performed electively, as a single stage procedure, by the team consisting of thoracic and plastic surgeons. The resection followed by chest wall reinforcement with prosthetic material was performed by the thoracic surgeon; the coverage of sternal/chest wall defect with the chest wall musculature/pedicled musculocutaneous flap was performed by the plastic surgeon. For defect coverage with the flap involving abdominal musculature, assistance from general surgeon was required.

Depending on skin and subcutaneous tissue involvement, a vertical midline incision, comprising the site of transcutaneous biopsy, or elliptical wide skin resection was the initial step of the sternal resection. Complete sternectomy was performed for large tumors involving both parts of the sternum or manubriosternal junction. Sternal body sparing manubrial resection was made with or without the resection of the clavicular heads, depending on tumour location. All resections were performed en bloc, involving the affected neighboring soft tissue, medial parts of anterior ribs, lung or pericardium. A target bone resection margin was >2 cm. Intraoperative frozen section of the resected specimen was performed to assess the resection margin.

Due to the small sample size, only descriptive statistics were performed. OS was calculated from the date of sternal resection as a starting point to the date of death or the most recent follow-up as the end point. It was estimated by the Kaplan-Maier method using SPSS version 18 software (SPSS Inc., Chicago, IL, USA).

Median perioperative interval, between the resection of the primary tumour and sternal resection, was 50.5 months (range, 17–103 months). 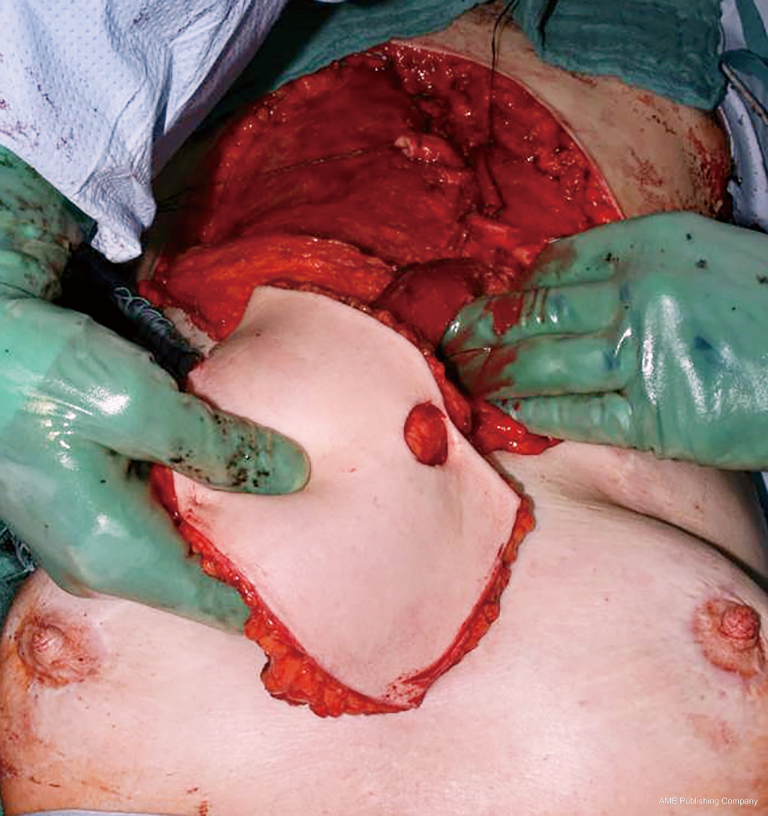 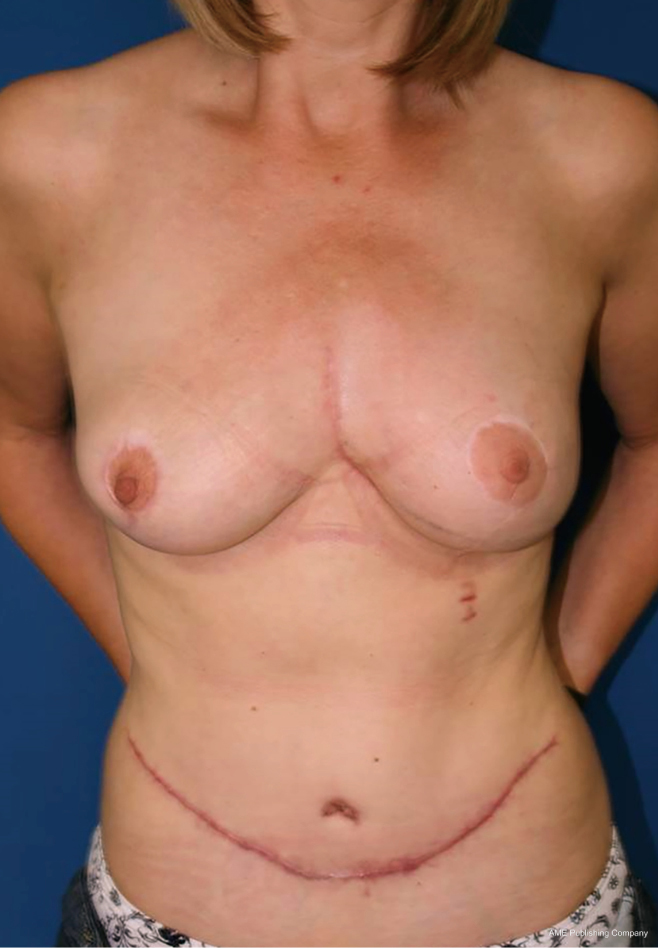 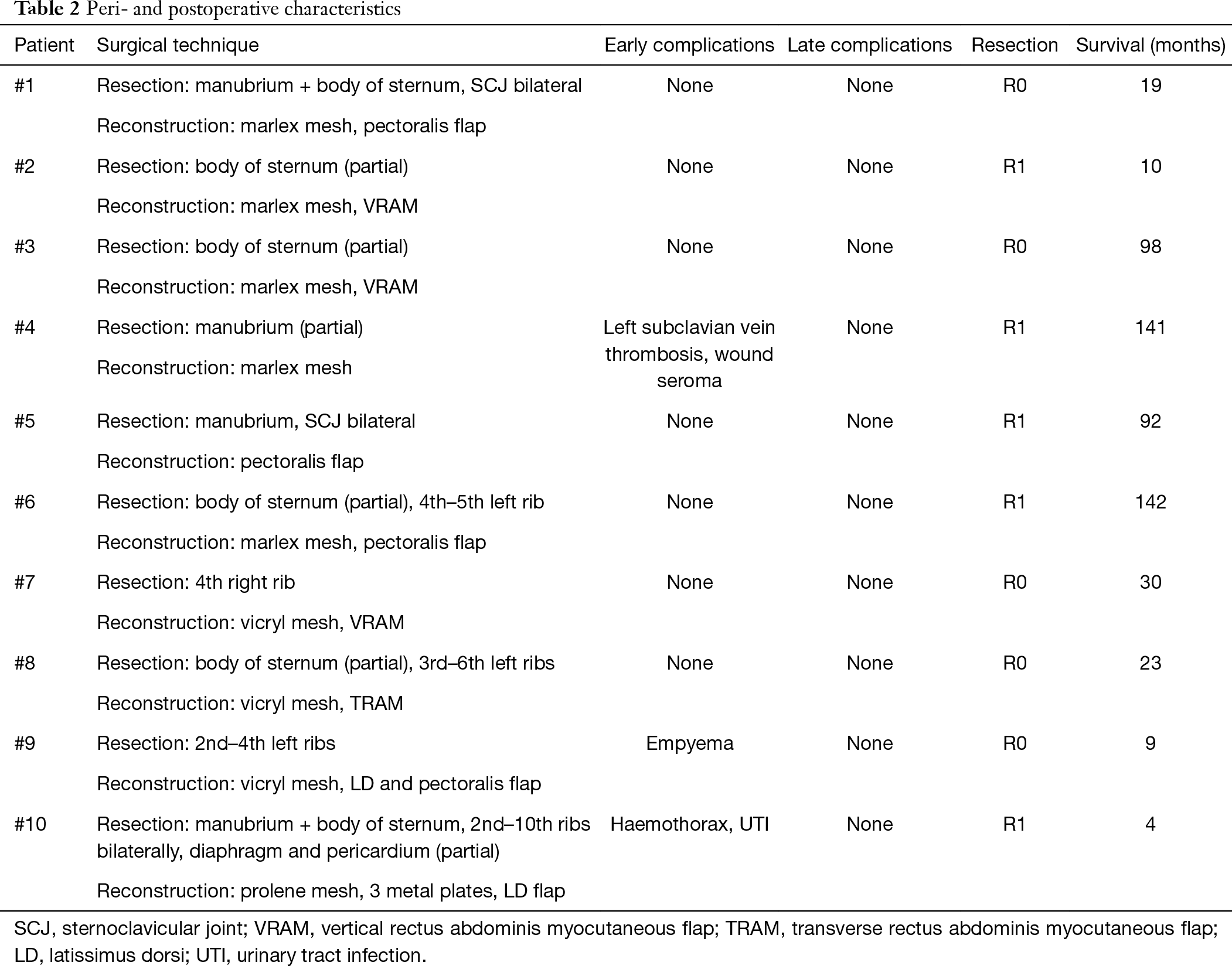 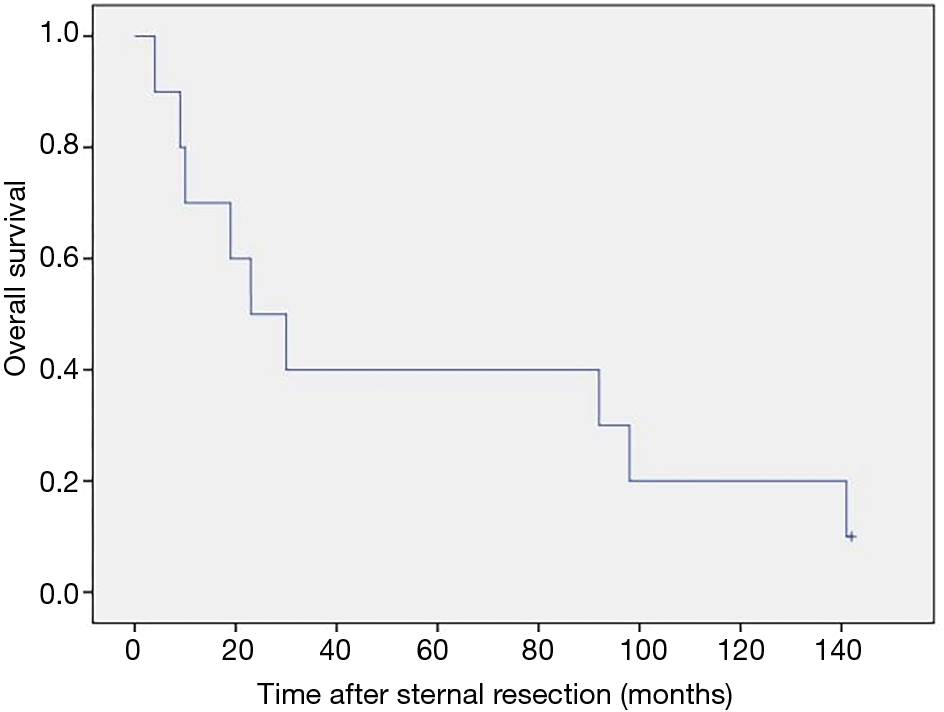 SSTs are uncommon and usually originate from the breast, thyroid or renal cancer (3). They constitute 15% of malignant sternal tumors and mostly affect the sternal body (4). Due to the low incidence and therefore, limited published data there is, in contrast to primary sternal tumors, no consensus on the management of SSTs, in particular of the non-breast cancer origin. In the setting of disseminated stage IV disease with sternal involvement, the conservative chemotherapy, radiation or hormonal therapy, depending on the tumor origin, has been recommended. For isolated SSTs also the surgical option including the resection of the whole sternum or its affected part with concomitant reconstruction can be taken into consideration as a part of the multimodality approach (5-7).

The main benefits of the surgery for SSTs are pain reduction or relief, maintenance of pulmonary function and better infection control within the overlying skin and soft tissues, particularly after previous radiation (8). As the sternum provides essential support to the thoracic spine, the role of sternal resection and stabilisation of the anterior chest in preventing pathological fractures and acute spinal deformity with consequent neurological injury is also of importance. Prophylactic resection to prevent secondary sternal fracture has not been recommended (6). In our group 7 resections were undertaken with curative intent and 3 to palliate the ulcerated skin and soft tissue overlying the sternum.

We found that sternal resections for SSTs can be performed with low perioperative morbidity and associated with acceptable survival. Two (20%) our patients required major thoracic surgical interventions during the perioperative period. One thoracotomy for evacuation of haemothorax on the 17th postoperative day and one for decortication for pleural empyema on the 22th postoperative day were performed. One patient was successfully managed with the antibiotics for UTI; in 1 patient the ultrasound guided needle aspiration of the submuscular seroma was performed. The OS rate of 40% after 3 and 5 years in our group is consistent with those observed by other authors (1,5,8).

A high rate of incomplete resections in our presented cohort has to be noted. In contrast to the primary sternal tumors, where the resection margins have been clearly defined (9,10), there is lacking data on the resection extent (wide vs. marginal) for SSTs, except for locally recurrent breast cancer (11,12). We recommend that the curative sternal resections should be performed to achieve a tumor-free margin. In our group we did not observe the dependence between OS and the completeness of the tumor resection. Paradoxically, patients with R1 resection had more favorable survival compared to those with complete resection. This could result from patient selection or could be a sequel of the stage IV disease. Due to the small size of our series and its heterogeneity we are unable to conclude that the resection margin is of no relevance in patients with SSTs. Similar observations have been reported by other authors (1).

The single-centre retrospective design, small number of highly selected patients and the heterogeneity of the presented group are the main limitations of our study.

In conclusion, our results support the evidence that secondary sternal malignancies can be safely managed by sternal/anterior chest wall resection and reconstruction with low perioperative mortality and morbidity. To assess the influence of the resection margin status on OS after sternal resection larger cohorts need to be studied. In selected patients with isolated SSTs the surgery should be offered as a quality of life maintaining treatment of choice, associated with acceptable survival.

Ethical Statement: The study was granted the approval of the trust’s Institutional Review Board (registration number 126_18 Bc). Individual patient consent for this retrospective observational study was not required.