Using an image-based navigational system is recommended in transbronchial lung biopsy (TBLB) for the diagnosis of peripheral lung lesion (1). Electromagnetic navigational bronchoscopy (ENB) is one of the latest image-based navigational systems that can be used for TBLB. It enables real-time tracking of the catheter (EWCTM: Extended Working Channel) and thus provide accurate guidance to the peripheral nodule. The EWC™ is introduced into the patient’s body bronchoscopically. In the electromagnetic field generated by the device (Locatable BordTM, Medtronics, MN, USA) set on the back of the patient, the position of the sensor in the EWC™ is calculated in real time and merged with the previously created 3D image of the patient. Since the first clinical trial was conducted in 2004 in the United States, the effectiveness of ENB has been described in many reports (2-7).

In our institute, we introduced the superDimensionTM (ver.7.0, Medtronic Inc., MN, USA) system in February 2016 and have since performed ENB-guided TBLB. This is the first report of a case series on ENB conducted in Japan. Herein, we detail our experience with this navigational system, including its diagnostic yields and associated complications.

From February 2016 to May 2017, 35 consecutive patients underwent TBLB using superDimensionTM in our department. The diagnostic yields, duration of the procedure, and complication rates were examined.

All the study patients underwent bronchoscopies performed by the first author of the manuscript.

All ENB procedures were performed under conscious sedation. All patients, except for 5, were subcutaneously injected with morphine chloride at a dose of 1 to 10 mg 15 minutes prior to the procedure. Thereafter, topical pharyngeal anesthesia using 2% lidocaine spray was given.

After a few minutes break for safety, the patient was administered 2 mg of midazolam (the total dose of midazolam varied from 4 to 10 mg).

After both bronchial trees were observed, the sensor and the EWCTM was introduced via the working channel of the bronchoscope, and the time from the introduction of the bronchoscope until the target was reached was recorded. Rapid on-site cytological evaluation (ROSE) was then performed in all but two cases, for which a cytologist was not available during the procedure. Stamp cytology of the TBLB specimen and brush cytology were performed. Three procedures were performed with fluoroscopy guidance, whereas TBLB was performed without fluoroscopy for the 32 cases in which the tip of the sensor appeared to reach the target on the ENB screen.

Of the 35 cases, 3 were excluded for insufficient follow-up. Among 32 cases we reached final diagnosis by surgical resection, transbronchial biopsy/cytology, or disappearance of the lesion on interval observation. Two cases were diagnosed by the disappearance of the lesion after 3 months follow up. In both cases cytology demonstrated inflammatory cells, which were included in the diagnosed group by ENB. A total of 25 patients were diagnosed via ENB, yielding a diagnostic rate of 71.4% (25/35). Among these 25 cases, 18 were diagnosed as primary lung cancer, 3 as metastatic lung cancer, and 4 as inflammatory disease (Figure 1). The diagnostic yield, tumor size, duration of the procedure (i.e., time from introduction of the sensor and until the target was reached) are summarized in Table 1. 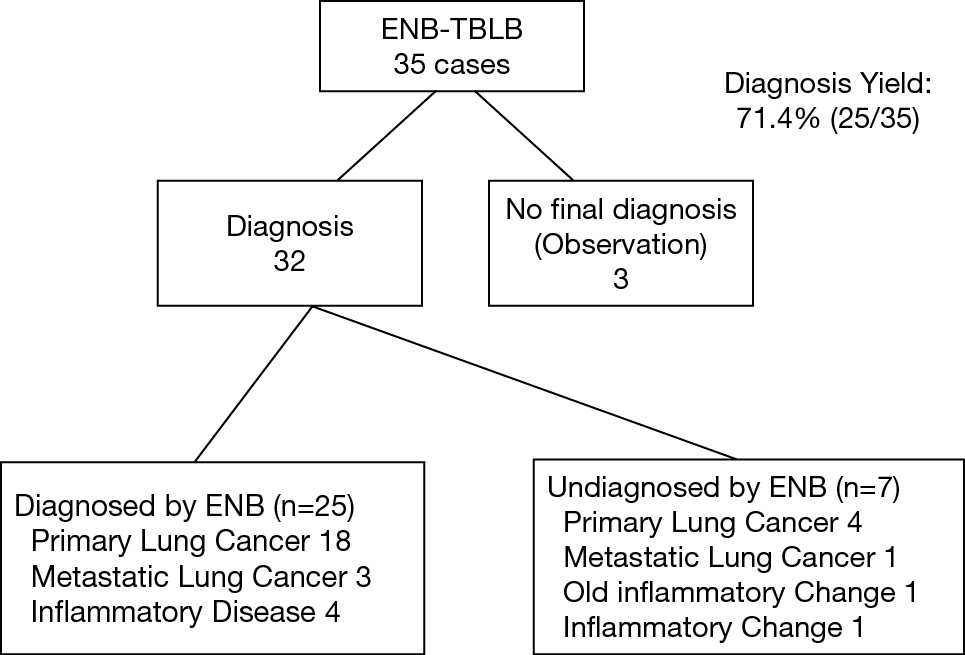 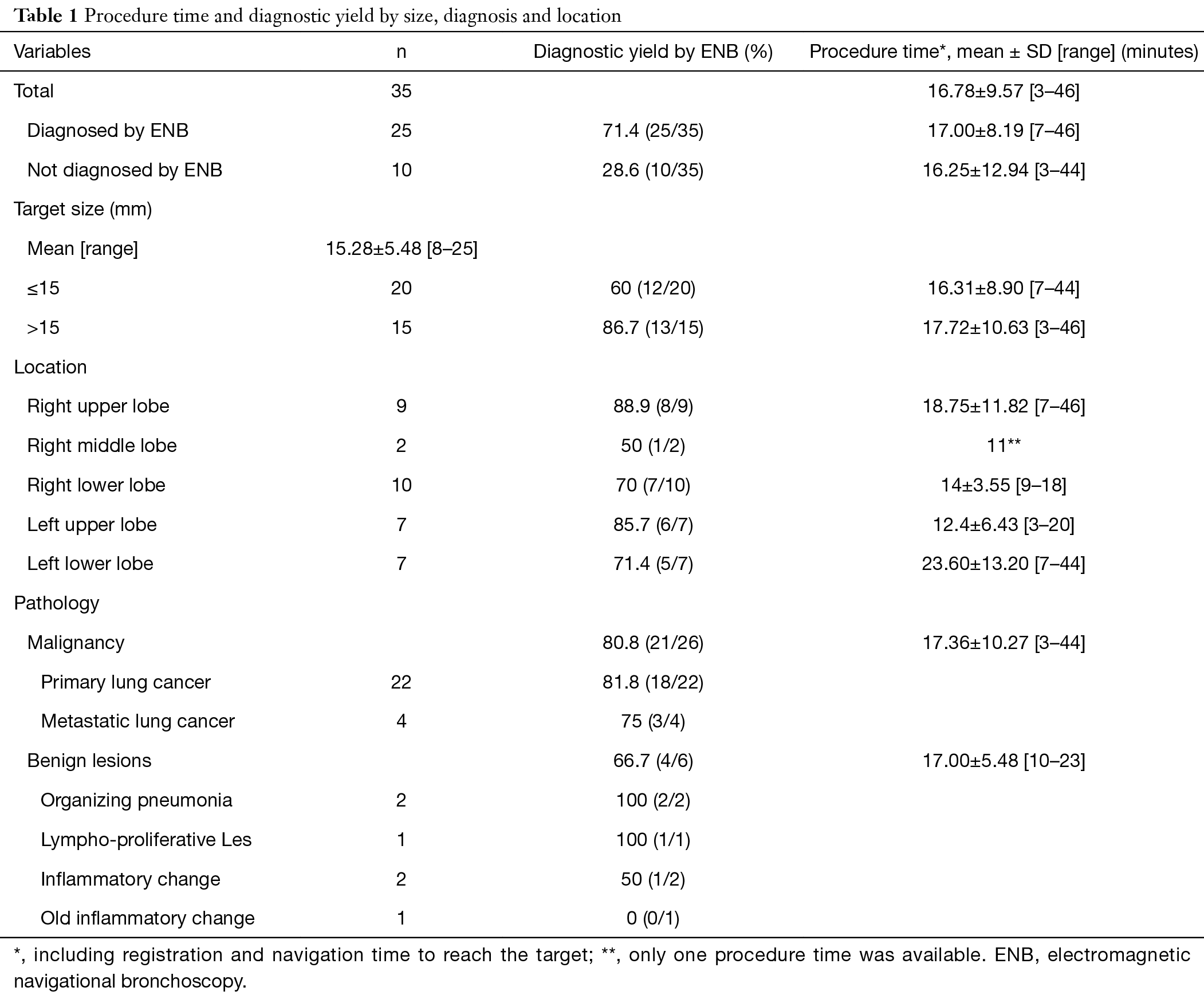 The average procedure time was 16.78±9.57 minutes (range, 3–46 minutes). The target tumor size and its correlation with the diagnosed and the undiagnosed group is shown in Figure 2. The average tumor size in the diagnosed group was 16.44±5.44 mm (range, 8–25 mm), while that of the undiagnosed group was 12.40±5.21 mm (range, 8–24 mm) (P=0.02). There was no significant difference in the locations of the target tumor. As regards the learning curve, the diagnostic yield and procedure time did not correlate with the experience (Figure 3). All the procedures were performed by the first author of this manuscript. 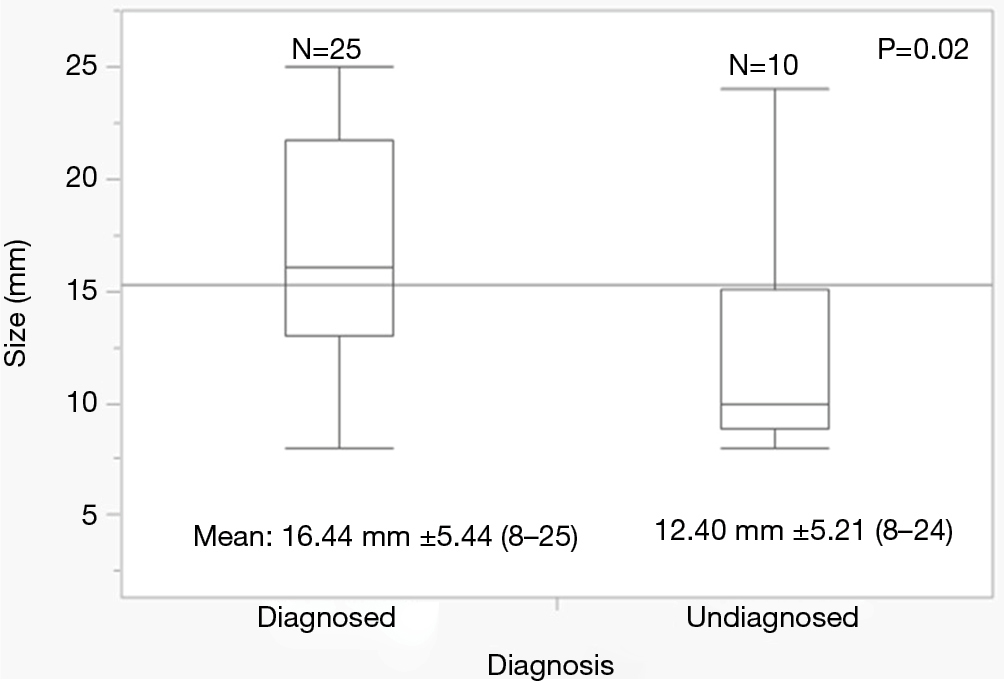 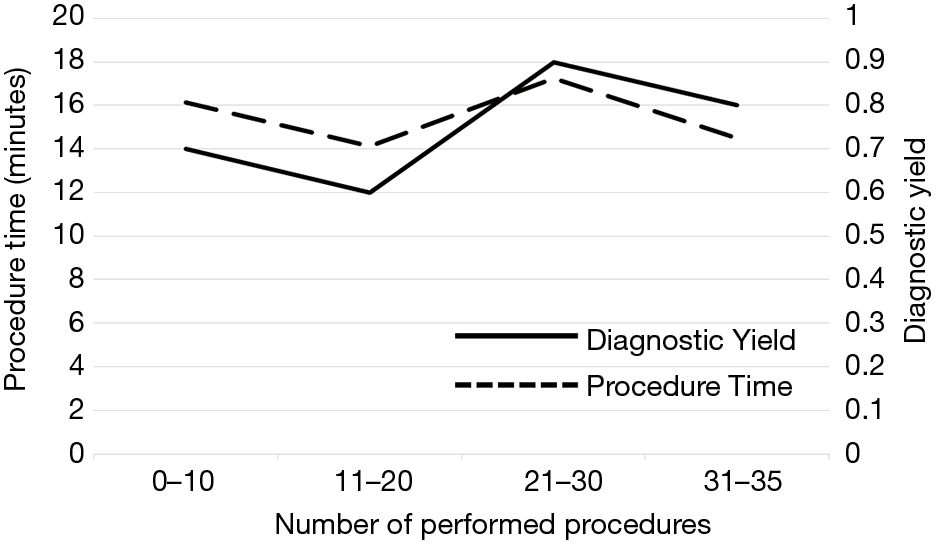 Figure 3 Learning curve: procedure time and experience of the physician.

More than a decade have passed since Asano et al. reported the effectiveness of virtual bronchoscopic navigation for transbronchial lung biopsy (8), and the importance of image-guided bronchoscopy is still increasing in relation to the increased incidence of ground-glass opacity lesions that cannot be confirmed via fluoroscopy.

The remarkable development of CT scan and imaging technology in the last decades has allowed for the rapid introduction of virtual reality technology to the medical field. Several imaging equipment that can automatically generate optimal bronchial paths to target lesions calculated from CT volume data have been released, such as the LungPointTM, Bf NaviTM, and DirectPathTM. In TBLB via radial endotracheal ultrasound (EBUS) or ultra-thin bronchoscope, a combination of these navigation systems has been reported to play a major role in improving the diagnostic yield (6,9).

The ENB system is an advanced navigational system. The advantage of ENB is that it allows the physician to confirm the precise position of the tip of the EWCTM in real-time. The EWCTM is designed to deliver the biopsy tools close to the target. There have been multiple reports showing the effectiveness of ENB, with diagnostic yields ranging from 59–77.3% (6,7). Gex et al. conducted a meta-analysis of 1,033 cases and found a diagnostic yield of as high as 64.9% (10). In this meta-analysis, the target size and location (with the lower lobe considered a challenging location) were correlated with the diagnostic outcomes. Similarly, the tumor size affected the diagnostic yield in our case series, but no significant difference in diagnostic yield in terms of the target location was found (Figure 2, Table 1). However, our experience suggest that respiratory fluctuations are larger in the lower lobe under conscious sedation, which may be disadvantageous compared to the other lung lobes in terms of accuracy which is claimed to be within 6 mm. The average target size reported to date ranged from 21 to 39.8 mm. In the current study, the average size was 15.28 mm. Although our study covered smaller lesions, the overall diagnostic yield was 71.4%, which was similar to that in previous reports. Radial EBUS is known to improve the diagnostic yield of biopsy for peripheral small lung cancer, and its combination with virtual bronchoscope is also recommended. Eberhardt concluded that the combination of radial EBUS and ENB might improve the diagnostic yield to as high as 88% (4). The combination of ENB with other diagnostic modalities, including radial EBUS or fluoroscopy, should be considered to achieve a higher diagnostic yield.

In this case series, all the procedures were performed under conscious sedation. In the first 5 patients, topical airway anesthesia plus intravenous midazolam were used. However, a large-sized flexible bronchoscope, such as the 1T260 (Olympus, Tokyo, Japan), which has an outer diameter of 5.9 mm, is mandatory for the TBLB, and EWCTM often tends to give strong stimulus to the patient airway, thus requiring deeper sedation or anti-cough measures. For the remaining 30 cases, 1 to 10 mg morphine hydrochloride was administered subcutaneously 15 minutes prior to the procedure. Although fentanyl is recommended because of its rapid onset of effect, we prefer morphine because the ward nurses are more familiar with morphine, and its antitussive effect has been well acknowledged. For the elderly patients older than 75 years, 1 to 3 mg, morphine gives sufficient antitussive and analgesic effect, while 3 to 5 mg is recommended for those younger than 75 years. Bowling et al. reported that there was no difference in the diagnostic yield between conscious sedation and general anesthesia (11), whereas in the meta-analysis by Gex et al., they concluded that adequate sedation under general anesthesia contributed to better diagnostic yield (P=0.02) (10). Although our case series is relatively small, we believe that ENB under conscious sedation with appropriate administration of opioid achieves an acceptable diagnostic yield. Regarding complications caused by the procedures, we encountered one case of hemopneumothorax and one pneumothorax that required chest drainage. The hemopneumothorax developed in the patient who underwent TBLB under fluoroscopic guidance. In both cases, the targets were located adjacent to the interlobar pleura; thus, pneumothorax was presumed to be inevitable even with the fluoroscopic guidance. In our case series, 32 ENBs were performed without fluoroscopic guidance. Among three cases, we experienced that in one case fluoroscopic guidance was quite useful to reach the target while in the other two it was employed to avoid pneumothorax, thus we could not conclude that the fluoroscopic guidance were useful or effective to improve the diagnostic yields in our case series. Previous studies on ENB without fluoroscopic guidance reported a diagnostic yield of 59% to 87.5%, and the incidence of pneumothorax ranged from 1.7% to 5.8% (3,4,12), indicating that our results were acceptable.

We reported the diagnostic yield and complications in the 35 consecutive cases of TBLB via ENB performed in a single Japanese institute. ENB is one of the key techniques that enable efficient and effective TBLB for peripheral small lung lesions.

Ethical Statement: This is a non-interventional, retrospective observational study based on the clinical records and was conducted in compliance with the Helsinki Declaration (1996). The institutional review board of Kyoto University Hospital approved the data collection and analysis (approval number: R1576).