Interatrial block (IAB) is a conduction delay between the activation of the atria, manifested as a P-wave duration ≥120 ms on the surface electrocardiograph (ECG) (1). IAB has been associated with the development of atrial fibrillation (AF) in diverse cardiac populations (2,3). IAB is thought to be a consequence of fibrosis of the Bachmann region, the largest interatrial conduction pathway. Prior studies have demonstrated an association between diffuse coronary artery disease and IAB (4). While the pathophysiologic mechanisms of IAB have not yet been entirely elucidated, it has been hypothesized that Bachmann region fibrosis due to atrial ischemia or necrosis may play a role. We analyzed a population of patients with coronary artery disease undergoing angiography who also received carotid ultrasonography as part of a study protocol to determine non-invasive predictors of AF as well as variables associated with IAB.

A total of 355 outpatients referred for clinically indicated coronary angiography were recruited from the cardiac catheterization laboratory at the Kingston Health Sciences Center (KHSC) as a part of an ongoing study of peripheral arterial and coronary artery disease and retrospectively analyzed (5). Inclusion criteria were defined as: (I) patients aged ≥18 years able to provide consent; (II) non-emergent outpatients referred for a clinically indicated angiogram for one of: nonspecific chest pain evaluation; stable or unstable angina pectoris; positive stress test; preoperative assessment; old or recent myocardial infarction (MI) (>2 days); (III) a follow-up ECG conducted at KHSC within 12 months of the index angiogram. Exclusion criteria included any contraindication to angiography or ultrasound, AF on initial ECG, lack of measurable P-waves in the inferior leads, and any device pacing the atrium. All patients underwent carotid ultrasound on the same day as their coronary angiography as part of the study protocol and had a baseline ECG completed within 1 month of the date of their angiogram and ultrasound. Ethics approval was obtained from the Queen’s University Health Sciences Research Ethics Board (file # 6019790).

Carotid ultrasound and angiogram results were interpreted by separate investigators who were blinded to the results of the other study and the ECG analysis. Angiography was performed by an experienced interventional cardiologist at KHSC using the standard Judkins technique on a General Electric System 2100. Angiograms were quantified using a previously established scoring system (5). Significant coronary artery stenosis was defined as luminal diameter reduction of ≥70% within any segment of the main branches of the artery examined or ≥50% stenosis for the left main coronary artery.

Carotid ultrasound was performed immediately post-angiography during the recovery period with an average time to completion of 30 minutes according to a published protocol. Carotid intima-media thickness (CIMT) and plaque measurements were quantified by two independent investigators using the GE Healthcare EchoPAC software. Exact methods for the carotid quantification including intima-media thickness, plaque height and plaque area have been previously described by our group, in the literature (6).

A standard 12-lead ECG (filter 150 Hz, 25 mm/s, 10 mm/mV) was obtained in all patients and images were amplified ×8 and analyzed using ICONICO semi-automatic calipers. Each ECG was blindly reviewed by two independent reviewers (S Haseeb, H van Rooy), different from the reviewers of the angiogram and carotid ultrasound. P-wave duration was measured according to the most recent consensus guidelines on IAB (1). The P-wave onset was defined as the point of initial upward or downward deflection from the isoelectric line and the offset was defined as the return of the waveform to the initial baseline. Partial IAB was defined as a prolongation of the P-wave duration ≥120 milliseconds in the inferior leads (II, III and aVF) and advanced IAB was defined as a prolongation of the P-wave duration ≥120 milliseconds with a biphasic (+/−) morphology in the inferior leads (7). This method has been previously described and validated with high interobserver and intraobserver correlation coefficients (8). P-wave voltage was measured from the peak of the P-wave to the isoelectric line of the TP interval in lead I.

Data were collected in Excel and imported into IBM SPSS (version 24.0 for Windows) for statistical analysis. Patient characteristics were compared for patients with IAB (either partial or advanced) versus those without IAB. Data were initially described using means and standard deviations for continuous data, and frequencies and percentages for categorical data. This was followed by a univariate analysis to assess the association of the collected data with the outcome using one-way ANOVA and independent sample t-test for the normally distributed continuous data, Mann-Whitney for continuous data that was not normally distributed and chi-square tests (Pearson or Fisher’s Exact as appropriate) for the categorical data.

Cox proportional hazard analysis was conducted to determine the difference in mean AF free survival between patients with IAB versus those without.

Logistic regression analysis was performed to select independent predictors of AF and IAB using all variables included in Table 1 as potential candidates, including demographics, comorbidities, medications, angiographic and ultrasonographic variables. Variables that were co-linear with other variables were removed from the model and the models were progressively refined until the strongest significant predictors remained. 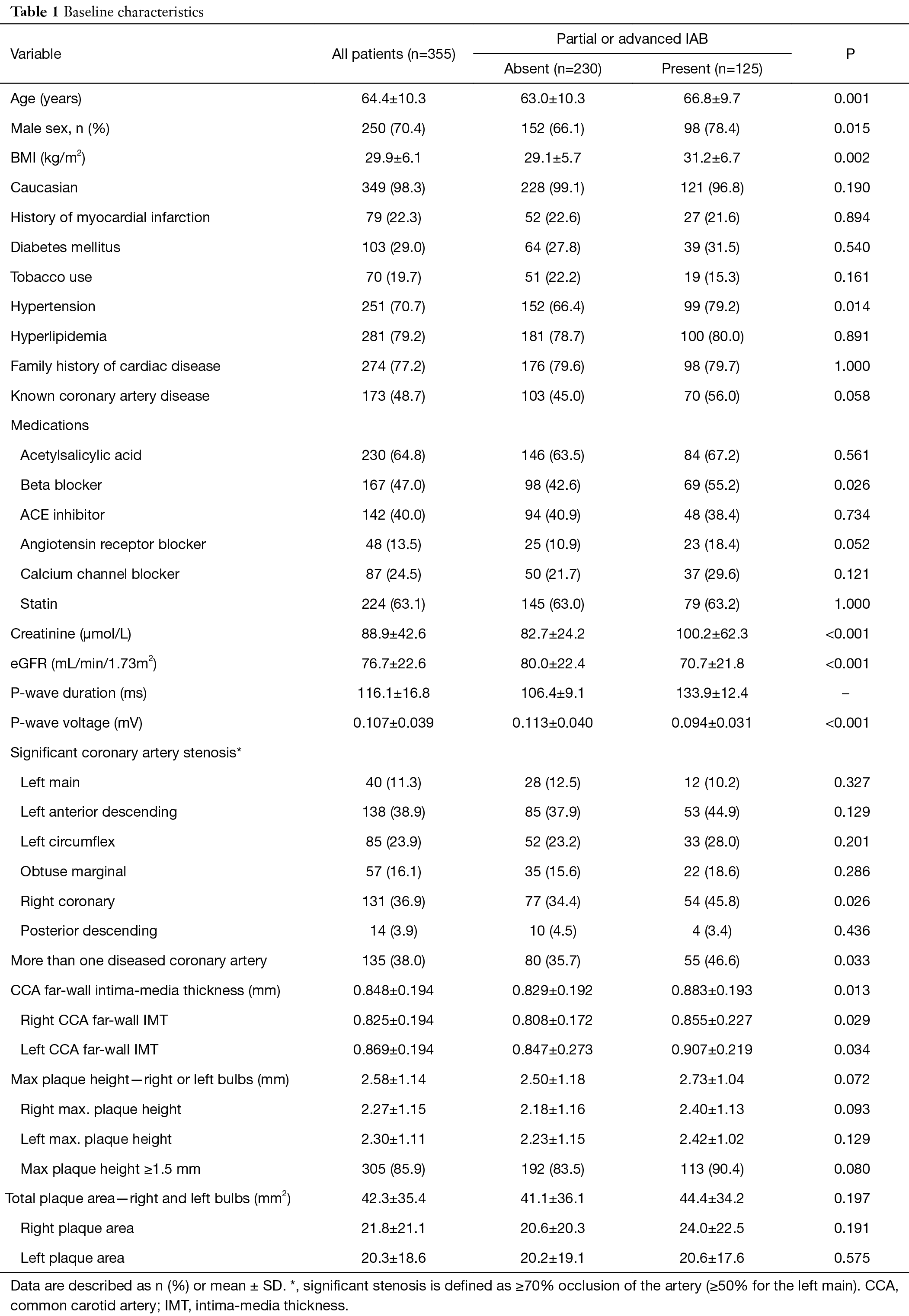 Data are described as n (%) or mean ± SD. *, significant stenosis is defined as ≥70% occlusion of the artery (≥50% for the left main). CCA, common carotid artery; IMT, intima-media thickness. 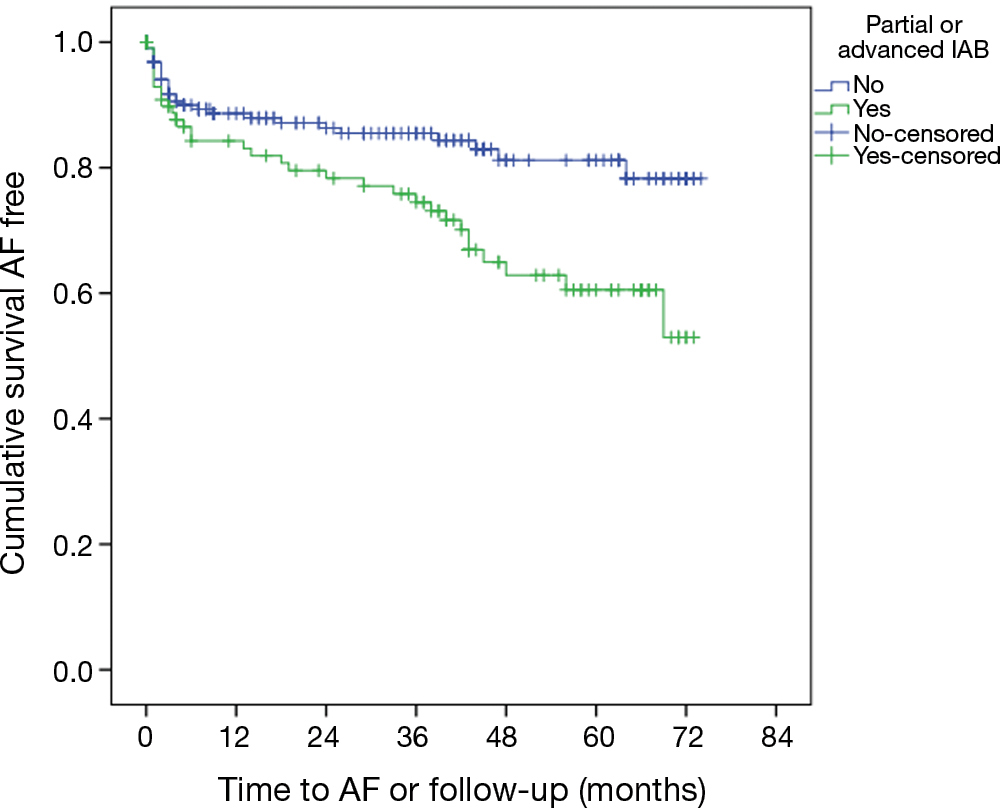 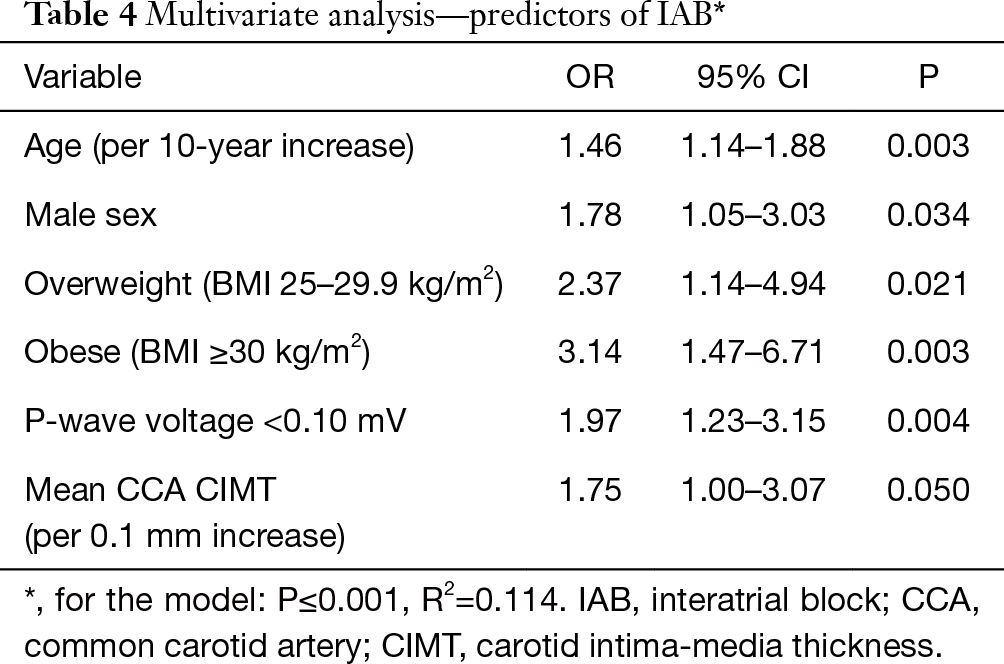 The primary finding of this study is that IAB is a predictor of new-onset AF in a population of patients with carotid and coronary artery disease. In addition, several associations with IAB have been identified, including increased CIMT and multivessel coronary artery disease. IAB is important due to its wide presence in the older population and has been previously associated with AF. The prevalence of IAB increases with age, and in the general population is over 40% in septuagenarians and over 50% in octogenarians (9). IAB has been associated with development or recurrence of AF in many different cardiac populations (10). The mechanism connecting IAB to AF is thought be a result of fibrosis of the Bachmann region, leading to the hypothesis that advanced atherosclerotic processes could be involved in the pathogenesis of IAB (11,12). A registry of patients with IAB is currently ongoing to better characterize the association of IAB and AF (13).

The ability of fibrosis to delay or block cardiac conduction has been well documented (14). Evidence for the Bachmann region being the major atrial structure involved has been demonstrated through experimental ligation of the Bachmann bundle in canine models. This experimental ligation produced the classic prolonged biphasic P-wave of advanced IAB (15). In addition, electrophysiological study of patients with IAB has demonstrated that the timing of activation over the left atrial roof is consistent with blockade of the Bachmann region (16). Recent studies have demonstrated a link between ischemia, fibrosis and delay of conduction in the Bachmann region. A study by Álvarez-García et al. prospectively evaluated the effects of selective atrial coronary artery occlusion in humans (17). Patients who had accidental occlusion of the atrial branches during coronary angioplasty were found to have a three-time greater incidence of new-onset IAB. Other studies have demonstrated a link between coronary artery disease and IAB (18), or have shown structural remodeling of the Bachmann region in patients with IAB (19).

A recent study by our group has shown an association between multi-vessel coronary artery disease and IAB in a population of patients presenting with NSTEMI (69.8% with IAB had multi-vessel disease vs. 48.1% without IAB had multivessel disease; P=0.026) (4). These findings indicate a potential link between diffuse coronary atherosclerosis and IAB. The current study sought to expand the link between diffuse atherosclerosis and IAB to include atherosclerosis found outside of the coronary artery tree. Interestingly, patients with IAB had a significantly higher BMI, an increased age, and were more likely to be male on multivariate analysis; factors that have traditionally been known as risk factors for atherosclerotic disease. Patients who were identified as having IAB in this study had significantly increased markers of carotid disease as well as a higher prevalence of multi-vessel coronary artery disease. However due to substantial collinearity, carotid and coronary artery markers were not able to be included in the same multivariate model. An interesting observation from this study is that IAB, which is in part due to a fibrotic process, is associated with CIMT and not plaque. However, this finding is consistent with the thought that CIMT and plaque are different phenotypes. An increased CIMT is mostly due to increased medial hypertrophy that is associated with cardiac risk factors such as hypertension leading to sclerosis or stiffness of the arterial wall (20,21). While such vessel wall damage can proceed to plaque deposition, plaque itself is thought to be an intimal process. This may explain why IAB is more closely associated with a potentially fibrotic process of the arterial wall (sclerosis) as opposed to atherosis. In patients with advanced atherosclerotic processes diastolic dysfunction is another possible mechanism of both increased CIMT and AF development. The findings of this study indicate that carotid bulb plaque height in combination with IAB are possible early and non-invasive predictors of AF occurrence in the studied population.

This study was performed at a single center with a large Caucasian population. The retrospective nature of the study implies a potential for inherent bias. While patients with prior documented episodes of AF were excluded from the study, it is possible that patients with prior undocumented episodes were erroneously included. In addition, because AF was captured only from follow-up appointments (ECG and Holters) it is possible that silent AF episodes may have gone unreported. The absence of systematic ECG/Holter follow-up decreases the sensitivity of this study to identify incident AF.

Ethical Statement: The study was approved by the Queen’s University Health Sciences Research Ethics Board (file # 6019790) and written informed consent was obtained from all patients.