Mechanical ventilation (MV) in critically ill patients is associated with increased mortality (1) and medical cost (2). Both issues exacerbate as MV is prolonged, especially due to ventilator-associated pneumonia and ventilator-induced diaphragm dysfunction (3). Thus, predicting the success of weaning from MV is an important and universal issue in critically ill patients.

Diaphragmatic dysfunction leads to a higher rate of weaning failure and prolonged MV time (4). Negative inspiratory force (NIF) is widely used clinically for the noninvasive and rapid assessment of the strength of the entire inspiratory muscle, including the diaphragm (5). However, NIF is easily influenced by subjective factors such as the patient’s perception and cooperation. At present, peripheral muscle strength is mostly evaluated using the Medical Research Council (MRC) scale (6-8).

In 1985, the assessment of diaphragmatic function was often based on twitch transdiaphragmatic pressure (TwPdi) obtained by phrenic nerve stimulation. Similowski et al. (9) proposed utilizing cervical magnetic stimulation to obtain the TwPdi and evaluate diaphragmatic contractility without pain or adverse effects. In 2001, Mills et al. (10) showed that twitch tracheal tube pressure during magnetic stimulation of the phrenic nerves could be used as an indicator of diaphragm strength in the intensive care unit (ICU).

Our previous study (11) showed that twitch tracheal airway pressure (TwPtr) and TwPdi correlated well, but TwPtr can better assess diaphragm function. Especially with the self-designed T-type solenoid unidirectional connection, diaphragm function could be evaluated non-invasively. We hypothesized that TwPtr was a better predictor for weaning compared to NIF and MRC score.

The present prospective study evaluated TwPtr relative to NIF or MRC score, for predicting success of weaning from MV.

All the patients, or their guardians, were aware of the purpose of this study and provided signed informed consent. The Scientific Research Project Review Ethics Committee of Guangzhou Medical University First Affiliated Hospital approved this prospective study (Ethics Batch Number 2017 No. 35).

Patients with any of the following were excluded from this study: thoracic drainage; abdominal hypertension; abdominal infection; pregnancy; in a severe delirium state; with uncontrolled epilepsy; or could not cooperate with the examination. In addition, patients with the following features that contraindicated magnetic stimulation were excluded: heart Pacemaker; implantable cardiac defibrillator; cervical spine injury; or cervical implant device (3).

Patients were considered for weaning under the following conditions: the cause of respiratory failure was relieved or controlled; patient was conscious without sedation or analgesic maintenance; hemoglobin ≥8 mg/L; ventilator pressure support ≤8 cmH2O; positive end-expiratory pressure (PEEP) ≤5 cmH2O; P/F ratio ≥200 mmHg; pH ≥7.25; and fraction of inspired oxygen (FiO2) ≤40%. Weaning failure was defined as the need to re-intubate for invasive ventilation within 48 hours after extubation. Weaning success was defined as no need to re-intubate within 48 hours after extubation.

The UK MRC 6-level scale (6-8) was used to score peripheral muscle strength, from 0 to 5, with 5 being the strongest. A total score <48 points satisfies the criteria for an initial diagnosis of ICU-acquired weakness (13).

NIF ≤−20 cmH2O is widely accepted as a prognosticator of weaning success. Most types of ventilators are equipped to measure this feature. With the SBT program in the pressure support mode (pressure support ventilation ≤8 cmH2O, PEEP =4–5 cmH2O), patients with smooth breathing and stable vital signs were placed in the half-seat position (a 45° angle between the spine and horizontal). With inspiratory strength maximized and the fastest inhalation, NIF was recorded. Measurements were taken for 5 minutes, and 3 records were acquired. The maximum value was taken.

Weaning progressed as in the Figure 1 flowchart. Weaning success was classified as simple, difficult, or prolonged, defined as follows (14). Patients who accomplished simple weaning proceeded from initiation of weaning to successful extubation on the first attempt without difficulty. Difficult weaning was considered the failure of initial weaning, with ≤3 SBTs required or ≤7 days from the first SBT to achieve successful weaning. Prolonged weaning was defined as failure at ≤3 weaning attempts or requiring >7 days of weaning after the first SBT. For purposes of comparison, the patients who experienced difficult or prolonged weaning were considered the non-simple weaning group. 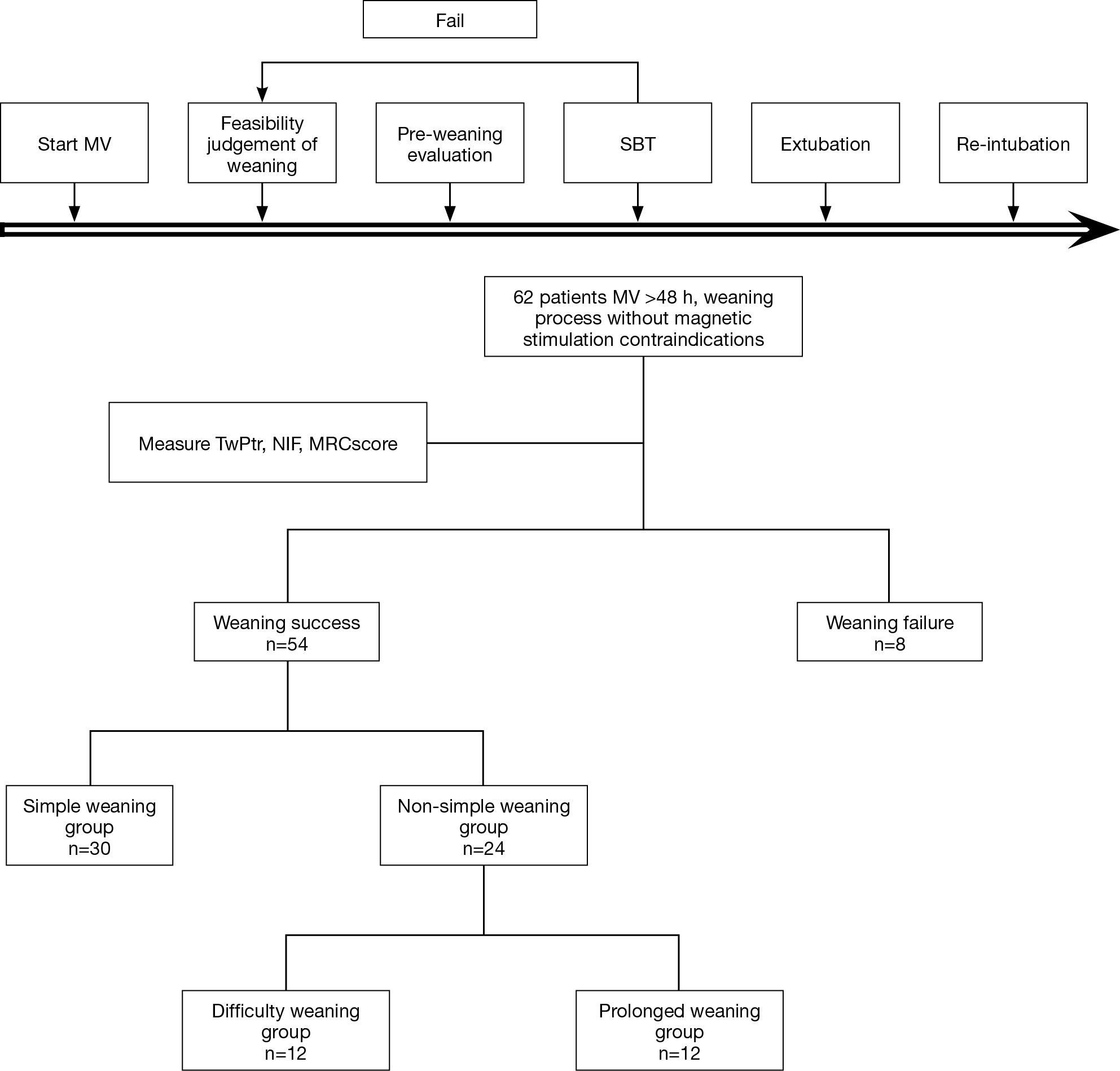 The measurement of TwPtr was performed with a 2-way non-rebreathing automatic trigger device system (Figure 2), with the ventilator connected to the pipeline. Before the magnetic stimulation, the patients were fasted and were observed for gastric juice retention. Parallel suction was utilized to maintain airway patency. Patients were positioned half-sitting (with spine at 45° from horizontal) and the waist belt was loosened to release abdominal pressure. 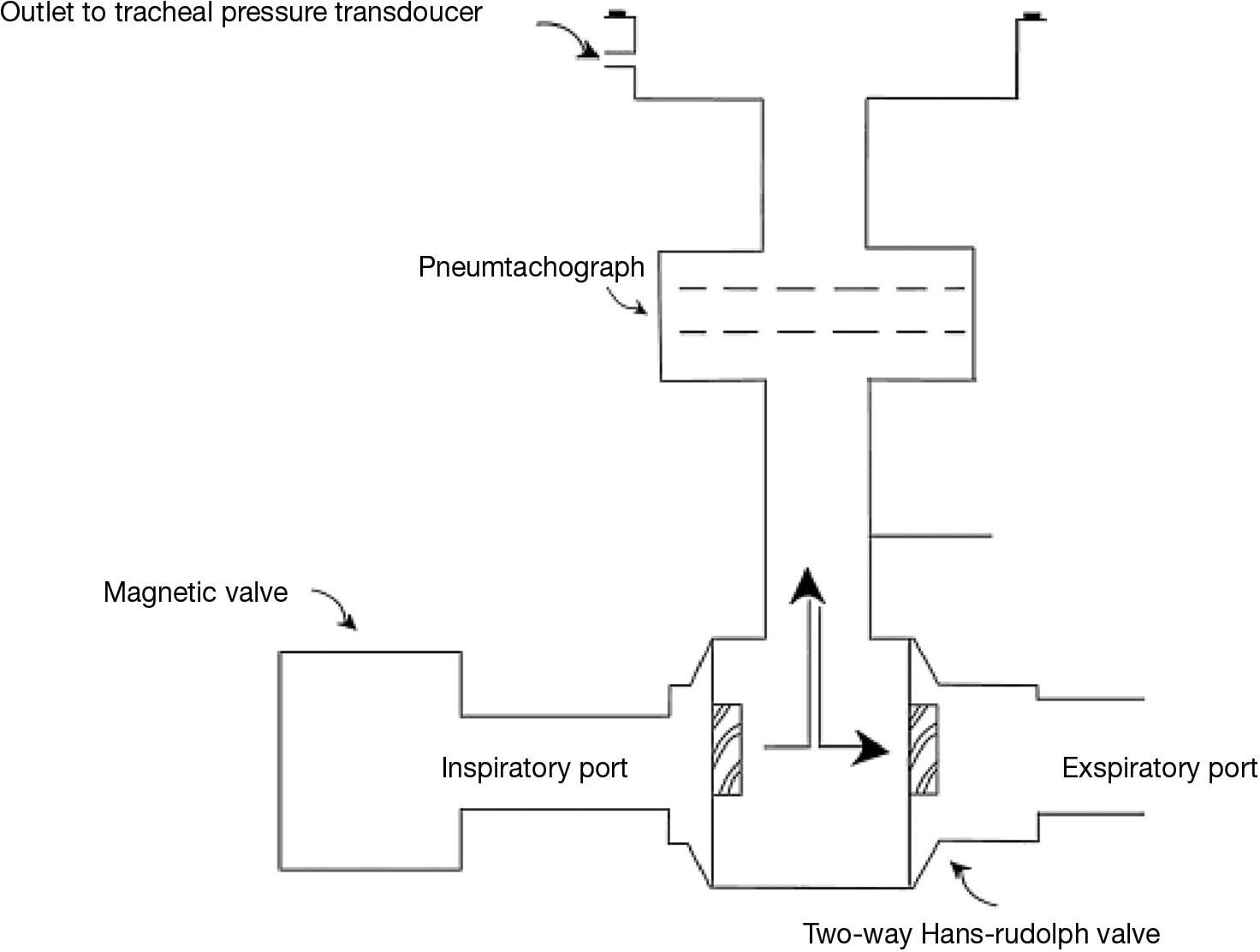 The TwPtr measurements are shown in Figure 3. At the end of the inspiratory phase, the magnetic valve at the inspiratory terminal was closed (Figure 3, point a). Inspired air was blown out of the system from the unidirectional valve. At this moment, a negative inspiratory pressure was created, which was detected by the pressure sensor (−0.005 cmH2O). A trigger given by the magnetic stimulator synchronization was released to stimulate the phrenic nerve of the body surface projection (Figure 3, point b). The diaphragm constricted, which caused the pressure in the system to change (Figure 3, point c). TwPtr was calculated as the difference in the pressures at points c and b. 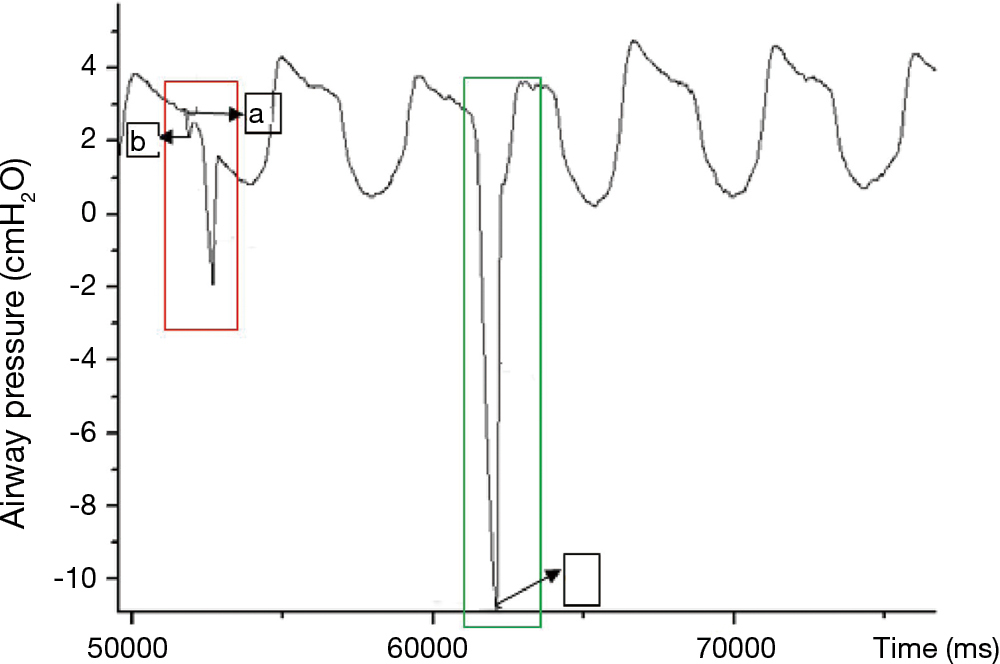 Figure 3 Schematic diagram of the measurement of TwPtr. At the end of the inspiratory phase, the magnetic valve at the inspiratory terminal was closed (a). Inspired air was blown out of system from the unidirectional valve. At this moment, a negative inspiratory pressure was produced, which was detected by the pressure sensor (−0.005 cmH2O) (b). A trigger given by the magnetic stimulator was released to stimulate the phrenic nerve, Causes the diaphragm to contract, lead to the pressure in the system to change (c). TwPtr was calculated as the differences in pressure at c and b. TwPtr, twitch tracheal airway pressure.

Before magnetic stimulation, a blank control was used to determine the starting point of the magnetic stimulus and the value of the intrapulmonary airway pressure by the patients themselves (shown as a red frame box in Figure 3).

Data was identified as with or without normal distribution. All normally distributed data were expressed as mean ± standard deviation (SD). The Mann-Whitney test was used for ranked variables. If normal distribution and variance homogeneity were satisfied, variance analysis was used. If the normal distribution and variance homogeneity were not satisfied, the Kruskal-Wallis H test was used. A multifactor logistic regression model was used to analyze and correct the effects of confounding factors on weaning, and the area under the receiver operating characteristic (ROC) curve (AUC) was calculated. The difference between AUCs was calculated using the methodology of Hanley and McNeil (15). P<0.05 was defined as statistically significant. The SPSS 19.0 software package was used for statistical analyses.

Sixty-two patients (45 men and 17 women, aged 61.3±15.9 years old) were included in the present study (Table 1). The overall mean APACHE II score was 19. All the patients were able to complete the entire experiment and no discomfort or other side effects were observed. 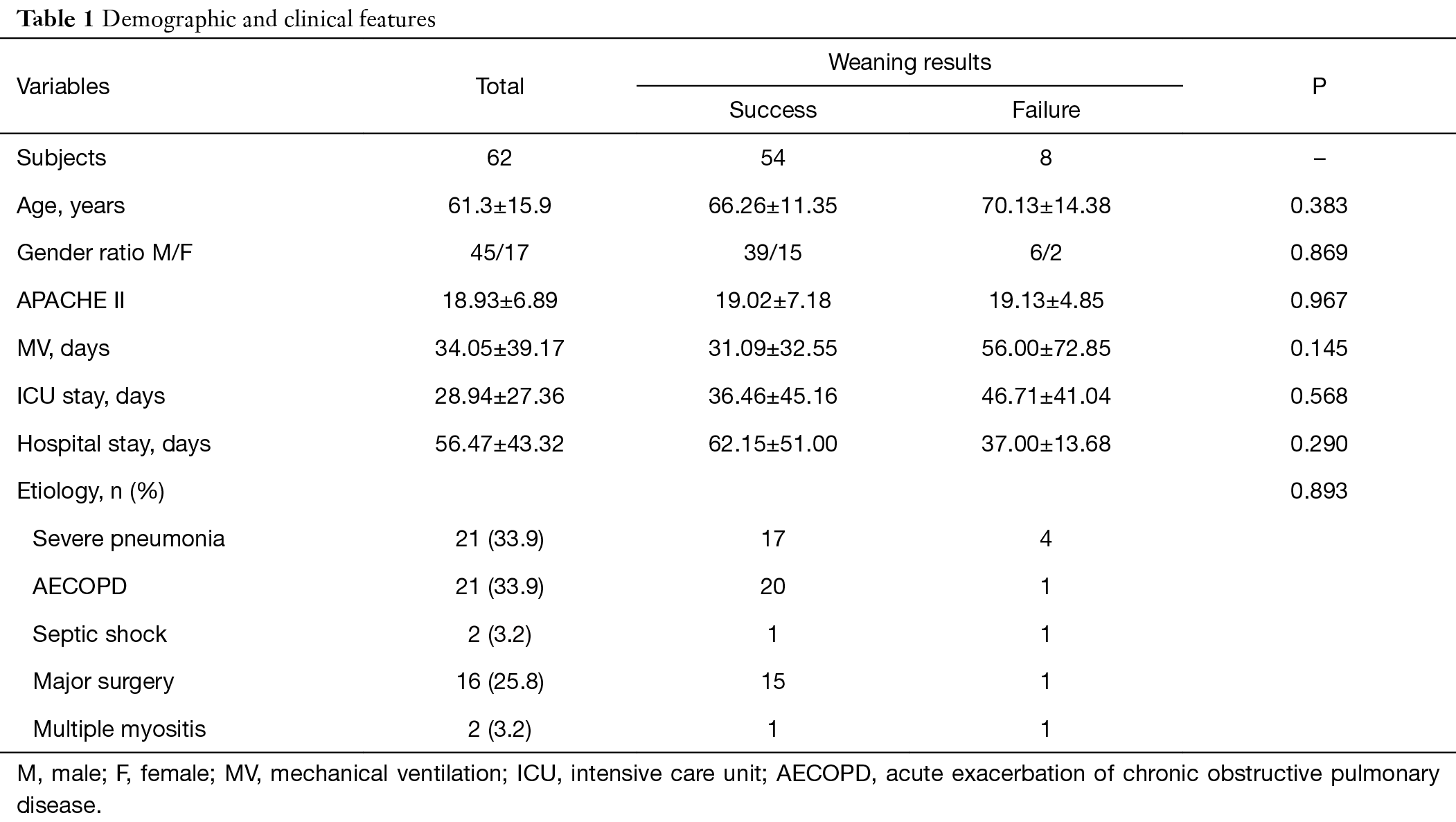 There were no significant differences at baseline between the successful weaning and failed weaning groups with regard to the following: age; gender; MV time; ICU stay; hospital stay, and MV etiology (Table 1).

The optimal thresholds obtained via ROC curve analysis for weaning success were: TwPtr, −8.75 cmH2O; NIF, −20 cmH2O; and MRC score, 48 (Table 2). The ROC analysis indicated differences in the sensitivity, specificity, and AUC of these parameters. By the AUCs, the MRC score was significantly less able to determine the success rate of weaning than TwPtr combined with NIF. 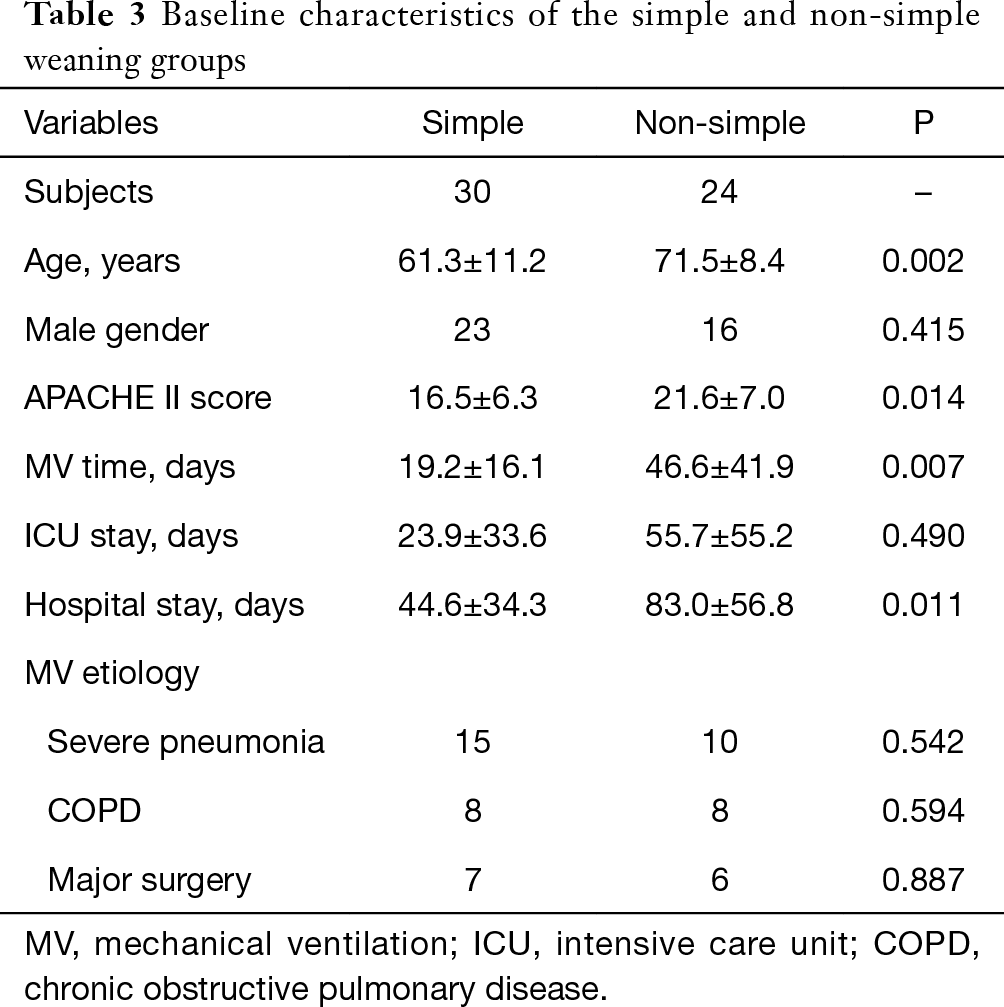 As life expectancies in China have increased, the average age of patients admitted to the ICU has become higher. Our study showed that the mean age of patients who experienced non-simple weaning was significantly higher than that of patients who accomplished simple weaning. This is in accordance with a recent prospective 1-day prevalence study performed at 55 ICUs in Mainland China (16), in which the study population comprised 302 adult patients receiving invasive MV. The study determined that being older than 74 years (odds ratio 2.78; 95% CI: 1.05–7.40) was a high-risk factor for weaning failure. These findings suggest that weaning should be considered with great caution in elderly patients.

Diaphragm dysfunction is associated with higher ICU and hospital mortality, and is a major determining factor in weaning failure (17). Using an automatic trigger system to monitor TwPtr is helpful for evaluating diaphragm function; readings of TwPtr are highly reproducible and effective (18). Our present study also showed that TwPtr was useful for differentiating patients who could accomplish simple weaning from those in the non-simple weaning group. Similarly, Dres et al. (19) showed that in ICU patients, low twitch pressure was independently associated with weaning failure, the MRC score was not, and the mortality rate of patients who required extended weaning was higher than that of the simple weaning group. It has also been shown that the TwPtr of patients in the ICU who survive (−7.3 cmH2O) was significantly lower than that of non-survivors (−9.7) (16). Esteban et al. (1) showed that the rate of mortality was positively associated with MV time, even in patients who experienced successful evacuation.

NIF is putatively not as accurate as TwPdi in predicting weaning outcome, because NIF requires subjective coordination and is also affected by lung volume status (20). In the present study, we set the NIF to −20 cmH2O as the threshold for extubation, with a lower specificity (71.4%) and a higher sensitivity (78.2%), which is similar to previous studies (21). NIF measurements are volitional tests that require patient’s cooperation and are affected by lung capacity status (22). These measurements may be difficult in the ICU, where respiratory muscle strength may be underestimated because of the effects of sedation. Therefore, an NIF of less than −20 cmH2O may be considered to include a certain amount of respiratory muscle reserve, while an NIF greater than −20 cmH2O should be combined with other parameters to predict weaning outcome.

Limb weakness is also prevalent in the ICU (morbidity 34%) in patients with long-term disease (23,24). The MRC score mainly reflects peripheral muscle strength. An MRC score <48 points satisfies the criteria for an initial diagnosis of ICU-acquired weakness (13).

Although the diaphragm and peripheral muscles are of the same skeletal muscle and have the same cell access, the damages that result from MV or bed rest are very different. Indeed, the MRC score found in our study had low specificity (57.1%) and sensitivity (67.3%), which suggests that it was not an indicator of extubation success.

The utilization of non-invasive ventilation is a component of modern weaning strategies that has less weaning failure and an improved outcome. This is especially true for patients who are likely to experience difficult weaning. The present study included a high number of patients with infections, in which weaning was considered only after stabilization and improvement of the underlying disease.

The present study is limited in that using phrenic nerve stimulation to measure diaphragm function may be contraindicated, and there is no gold standard for determining diaphragm dysfunction. We also cannot absolutely rule out that incomplete (or overstimulation) of phrenic nerve fibers may have contributed to low (or high) twitch pressure in some cases, since no references regarding range are available. We did not conduct a follow-up study of mortality. A multi-center study is needed.

In summary, for patients on MV in the ICU entering the SBT stage, TwPtr had higher sensitivity and specificity than did the NIF or MRC score for differentiating patients who underwent simple and non-simple weaning. TwPtr combined with NIF or other combinations could be used to predict weaning success better than MRC score alone. A further comprehensive assessment will require a larger sample size and evaluations of muscle endurance and other indicators.

Funding: This research was supported by National Natural Science Foundation of China (81490534).