Chronic obstructive lung disease (COPD) is an irreversibly progressive disease with gradual decline of quality of life due to impaired physical performance. The World Health Organization expects the burden of COPD to increase in the next few years due to aging of the world population and to become the 4th leading cause of death in 2030 (1). The main causes for COPD are smoking and air pollution. Smoking cessation and oxygen therapy in hypoxemic patients are the only known conservative means to prolong life in affected patients. Inhaled medications and pulmonary rehabilitation can increase quality of life and reduce the rate of exacerbations. Hypercapnic patients may benefit from non-invasive ventilation (2).

Lung volume reduction (LVR)—both surgical or bronchoscopic—showed a benefit in quality of life and survival in multiple randomized trials in selected patients with severe airflow obstruction and hyperinflation (3-8). Usually, static hyperinflation is assessed with body plethysmography based on residual volume (RV) and RV/total lung capacity (TLC) ratio (9). RV of more than 175% predicted and a RV/TLC ratio of more than 0.58 were main inclusion criteria in major studies (3-6,10-17). Both parameters are key features to qualify for a LVR (18,19), since the diaphragm has been demonstrated to gain strength after “deflation” of the lung (20).

To the best of our knowledge, this is the first report on a successful surgical LVR in an emphysema patient without the conventional evidence of hyperinflation measured by body plethysmography.

A 68-year-old patient was referred for evaluation of a LVR therapy. He was on inhaled bronchodilators [long-acting beta 2-agonist (LABA), long-acting muscarinic antagonist (LAMA)] and topical glucocorticoids, had participated in several pulmonary rehabilitation programs and was on long term oxygen therapy. Despite of all the therapies he still suffered from severe dyspnea on minimal exertion (e.g., after climbing more than one fleet of stairs), while he denied chronic cough and acute exacerbations. Due to his severely impaired exercise tolerance, he already mentioned early signs of social retreat and depression. At physical examination, the patient had a marked barrel-like configuration of his thorax with slightly elevated shoulders suggesting clinical evidence of hyperinflation and pursed lip breathing during. Spirometry revealed severe airflow obstruction with an FEV1 of 42% predicted, and TLC and RV measured by body plethysmography were 122% predicted and 145% predicted, respectively (Table 1). Based on TLC, RV and the ratio of RV/TLC of 0.45, there was no evidence of severe absolute or relative hyperinflation. The chest radiograph revealed signs of mild hyperinflation, an increased transparency of upper lobes and reticular changes in the lower lobes (Figure 1). Chest computed tomography (CT) showed a pronounced heterogeneity of the lung density. In particular, the right upper and middle lobes, and, to a lesser extent, also the left upper lobe, revealed partially bullous emphysematous destruction of the lung architecture, while the lower lobes were of much higher density suggesting some compression and early fibrotic changes in some areas (Figure 2). CT volumetry revealed a total lung volume of 8.01 L, which was very similar to the TLC of 7.95 L measured by body plethysmography (Figure 2, Table 1). According to CT-volumetry, the volume of both upper lobes was 5.63 L, the volume of the middle and lower lobes, 3.38 L. The estimated emphysema volume based on lung zones with very low density below −950 HU was 3.38 L. 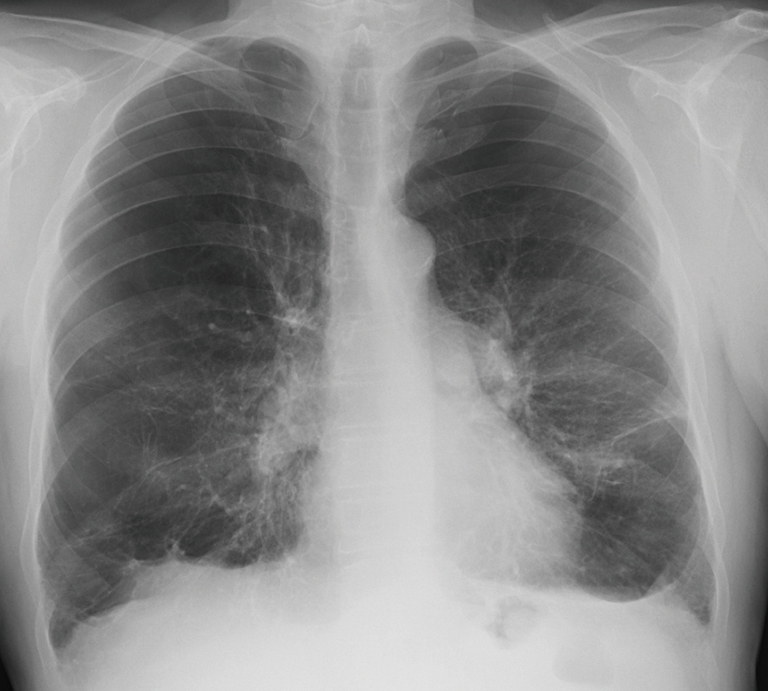 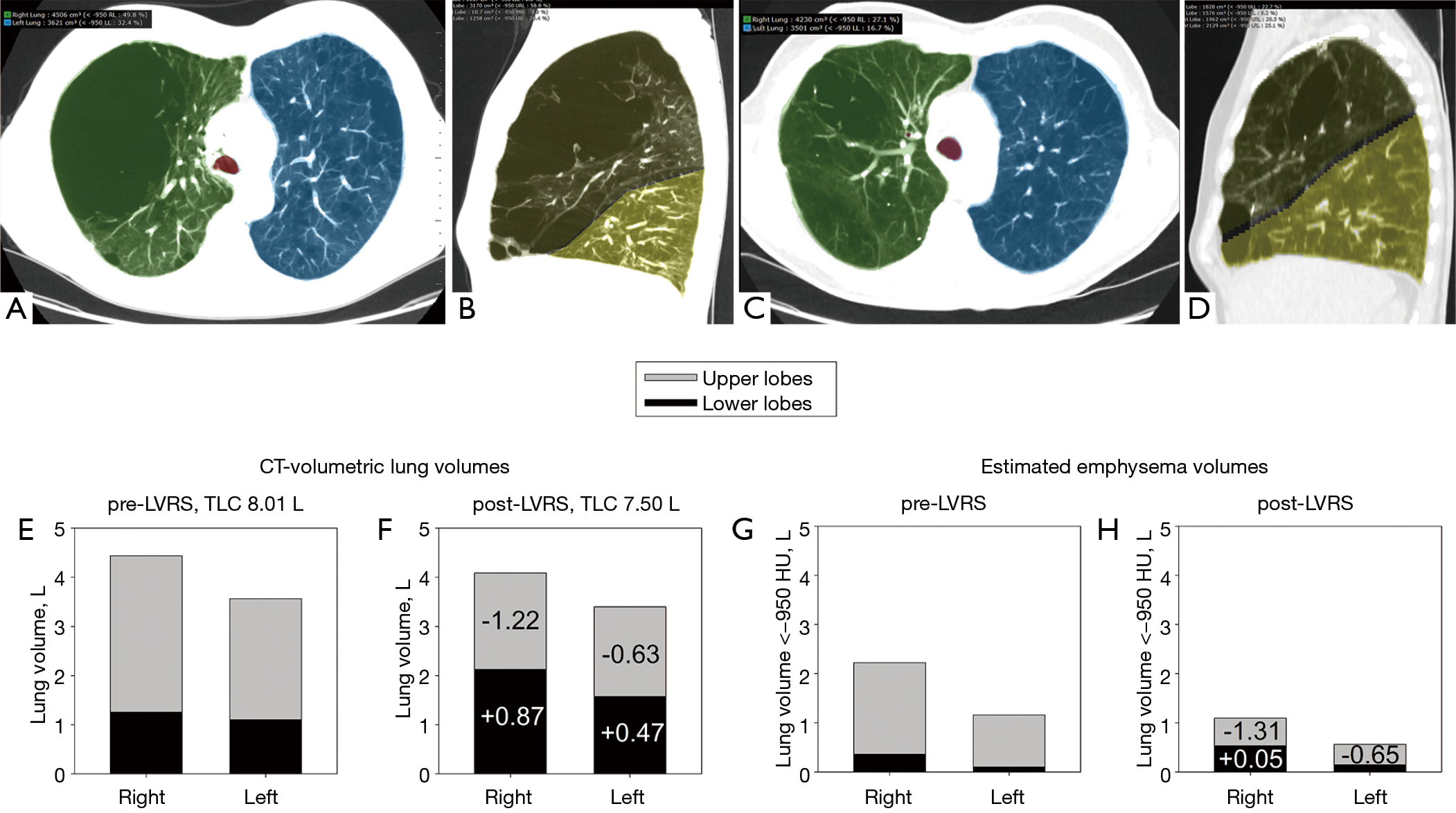 Figure 2 Quantitative CT analysis. (A-D) show representative transverse and sagittal CT sections before (A,B) and 5 months after LVR (C,D). Bullous emphysematous changes are appreciated in the upper lobes while the lower lobes have an increased density and linear opacities. These alterations are pronounced before LVR and reduced after the intervention. (E-H) show the CT-volumetrically determined volumes of the upper and lower lobes before and after LVR (E,F) and the lung volume with very low density (−950 HU) considered to represent emphysema (G,H). LVR decreased upper lobe and increased lower lobe volumes by the amount indicated in the columns (values in liters). The decrease in the left and right lung volume (F, −1.85 liters) is nearly identical to the decrease in tissue of very low density (H, −1.96 liters) suggesting that virtually all resected volume was of very low density (emphysema). LVRS, lung volume reduction surgery.

After interdisciplinary discussion with thoracic surgeons the decision was made to offer surgical LVR because of the obvious CT-radiological signs of regional hyperinflation and bullous lung destruction in combination with basal fibrosis. The patient was informed about the missing conventional inclusion criteria. Nevertheless, he fully agreed to undergo the procedure despite possible disadvantages or complications.

Thoracoscopic LVR of the most destructed areas of the right upper and middle lobes and of the left upper lobe was performed. There were no perioperative complications. Drainage time was 3 days. Only a few days after the operation the patient already perceived an improvement of dyspnea, and he could be dismissed from hospital on the 4th postoperative day. Five months later, the patient was in markedly improved physical and psychological condition. His pulmonary function showed a marked increase in FEV1 by 107% (+1.27 L), no significant change in TLC (by body plethysmography), a decrease in RV by 1.13 L, and the 6-minute walking distance (6-MWD) improved by 150 meters (Table 1). Successful LVR was confirmed by quantitative CT analysis (Figure 2) suggesting a major reduction in upper lobe volume corresponding to areas destructed by emphysema, and a simultaneous increase in lower lobe volume. Lung function and 6-MWD gradually declined over the next 2 years, and the patient developed progressive combined pulmonary fibrosis and emphysema (CPFE) with pulmonary artery hypertension [mean pulmonary artery pressure (mPAP) 59 mmHg].

In severe pulmonary emphysema hyperinflation is assessed routinely by body plethysmography. Increased RV and RV/TLC are established predictors of successful LVR, independent of whether by surgery or by bronchoscopy (18). According to the described case, there might be a selected number of patients who benefit from LVR even though RV and RV/TLC, which are global measures of hyperinflation, are only moderately increased. In some of these highly selected patients pronounced regional hyperinflation evidenced by CT in combination with less affected areas or even areas with reduced lung compliance such as in pulmonary fibrosis may suggest the potential for a benefit from targeted LVR. An appealing explanation of the lack of plethysmographic evidence of significant hyperinflation in the described case is that total lung volume measured globally by plethysmography was only slightly elevated. Evidently, the pronounced hyperinflation of upper lobes and apical lower lobes was offset by volume loss in the lower lobes due compression and retraction by fibrosis. CT before LVR showed slight reticular opacities of both basal lung fields. Consistently, airflow obstruction and hyperinflation have been demonstrated to be counteracted by pulmonary fibrosis in cases of CPFE (21).

According to the CT-volumetric and densitometric analysis, the LVR reduced the total lung volume only mildly (by 0.5 L) but it confirmed removal of 1.85 L of upper lobe volume and reduction of emphysematous tissue by 1.96 L (Figure 2). This suggests that the surgeon was able to remove nearly exclusively emphysematous target areas. At the same time, the lower lobe volume increased significantly by 1.34 L (Figure 2) with virtually no increase in the very low density volume. This is consistent with no change in the amount of emphysema in the lower lobes that were rather dense due to early fibrosis. Therefore, LVR seemed to have reduced compression of the lower lobes that were subsequently expanded to a greater extent which may have contributed to improvement of airflow obstruction as suggested by an increase in FEV1 and FEV1/FVC.

There is increasing evidence of the clinical importance of dynamic hyperinflation in patients with COPD (22). Dynamic hyperinflation might also explain the exercise limitation in the current patient before LVR. Expiratory collapse of the airways in areas of the lung with emphysematous destruction together with a reduced airway calibre due to progressive compression of the lower lobes due to increasing hyperinflation of the upper lobes during physical exertion might have exacerbated airflow obstruction. However, we could not verify this hypothesis in our patient because CT-volumetry during exercise is not feasible and repeated inspiratory capacity measurements that are performed to evaluate global dynamic hyperinflation would not have detected the relative volume changes in the upper and lower lobes.

Our observations demonstrate that in selected (rare) cases, LVR may provide a clinical and functional improvement in patients with emphysema even when established predictors of successful LVR such as elevations in TLC, RV and RV/TLC are not pronounced. Quantitative CT analysis may identify regional hyperinflation due to emphysema in combination with reduced volume of lung regions with fibrotic changes such as in patients with CPFE that result in mutually opposing changes of lung volume. LVR of carefully targeted emphysematous areas of the lung may provide clinical and functional improvement in these particular conditions.