Esophageal small cell carcinoma (ESCC) has been reported in the literature to be an aggressive and highly metastatic disease with poor prognosis (1). ESCC is a rare esophageal carcinoma, representing only 0.8% to 3.1% worldwide. However, esophagus cancer is much more frequent in many developing countries including China, so ESCC cases are not rare in our country (2,3). Due to the low incidence of ESCC, there is a paucity of data on the natural history of this entity as well as the prognostic factors. Histologically, ESCC is characterized by neuroendocrine-like architectural patterns, which is similar to small cell lung cancer (4). The diagnosis of ESCC is mainly depended on immunohistochemical (IHC) staining for several common neuroendocrine factors, including neuron specific enolase (NSE), chromogranin A (CgA) and synaptophysin (Syn). Other factors, such as thyroid transcriptional factor-1 (TTF-1), a kind of nuclear transcriptional factor highly expressed in epithelial cells of lung and thyroid, are also described to be highly positive in ESCC and considered to be practicable markers for diagnosis of ESCC (5). However, there is a paucity of information pertaining to these diagnostic factors associated with survival of patients with ESCC. Therefore, we retrospectively described the clinical manifestations and IHC features of patients with ESCC, and identified biomarkers that predict clinical outcome in patients with ESCC. We also sought to clarify the effect of different marker combinations on survival outcome.

Seventy three patients with ESCC confirmed pathologically between July 2000 and April 2012 were evaluated. ESCC was diagnosed using histological criteria prepared by the World Health Organization (6). The main diagnostic points included morphology and possible immunohistochemistry stain of diagnostic markers, such as NSE, Syn, CgA, TTF-1, leu7 and CD56. For those equivocally diagnosed cases, after excluding other subtypes of esophagus tumor, small dense-core granules should be detected by electron microscopy. The disease was staged according to the staging classification (7th edition) of the AJCC for esophageal cancer (7). All the patients had sufficient tissue to generate IHC staining. All clinical information and histopathologic features were collected from electric medical records retrospectively. The study protocol was approved by the Ethic Committee of Zhejiang Cancer hospital, Hangzhou, China (No. IRB-2018-139), and was performed in accordance with ethical principles of the Helsinki Declaration.

Paraffin-embedded tissue sections (4 µm) were prepared from tissue that was collected during bronchoscopy or surgery prior to chemo- or radio-therapy. Sections were incubated with antibodies directed against the following markers: NSE (NSE-1G4, cat# 18-01963, Zymed, Inc., San Francisco, CA, USA), Syn (snp88, BioGenex, Fremont, CA, USA), CgA (LK2H10, BioGenex, Fremont, CA, USA), and TTF-1 (8G7G3/1, Zymed Inc., San Francisco, CA, USA). Immunohistochemistry staining was carried out as previously described (4). In brief, sections were deparaffinized by a series of xylene and ethanol, followed by a wash with H2O. Sections were blocked for 30 min in H2O2 (3%) at ambient temperature, and underwent antigen retrieval by boiling for 4 min at max power, and for 12 min at 50% power. Subsequently, sections were cooled down for 30 min, rinsed in phosphate buffer saline (PBS), and incubated with normal goat serum (NGS, 10%) for 30 min at ambient temperature, followed by overnight incubation at 4 °C with antibodies directed against NSE, CgA, TTF-1, or Syn. Sections were washed with PBS and incubated for 30 min at 4 °C with a goat anti-mouse secondary antibody. Next, sections underwent signal amplification for 30 min, followed by 30 min of chromogen development. Sections were counterstained with hematoxylin and were mounted using covers lips. As controls, sections were incubated with PBS and primary antibodies were omitted (8).

Positive staining for NSE, Syn, and CgA was found in cytoplasmic regions, whereas TTF-1 staining was primarily observed in the nuclei. Semi-quantitative analysis was achieved by scoring at a magnification of 100×. The expression intensity was scored as follows and compared to % of positive tumor cells: +(<10%), ++(10–50%), +++(>50%), –(no staining observed). Scoring was performed by two independent investigators, who were blinded to the identity of the specimens (9).

Overall survival (OS) was calculated as the time from diagnosis to the date of death from all causes or the last follow-up. The association of these proteins expression with patients’ clinicopathologic features was assessed by the chi-square test. Survival curves were constructed by the Kaplan-Meier method and were compared by the log-rank test. The influence of prognostic factors was investigated by Cox proportional hazards regression model. A 2-tailed P value of less than 0.05 was considered as significant difference. Statistical analyses were using SPSS, version 13.0 for Windows software.

The demographic and clinicopathologic aspects of 73 patients were listed in Table 1. The median age at the time of diagnosis was 57 (range, 36 to 77) years. Fifty five patients (75.3%) were male and 18 (24.7%) were female. Nineteen patients (26%) were stage IV, and metastasis sites included liver in 10 patients, lung in 6 patients, distant lymph nodes in 12 patients, and bone in 7 patients. Curative surgery was performed in 45 patients (61.6%), and other treatment included 8 radiotherapy (11%), 21 adjuvant chemotherapy (28.8%), and 27 palliative chemotherapy (37%). A regimen of etoposide and cisplatin (EP) was most frequently used in the study, and other chemotherapy regimens included irinotecan plus cisplatin (IP), paclitaxel or docetaxel plus cisplatin or carboplatin (DP). 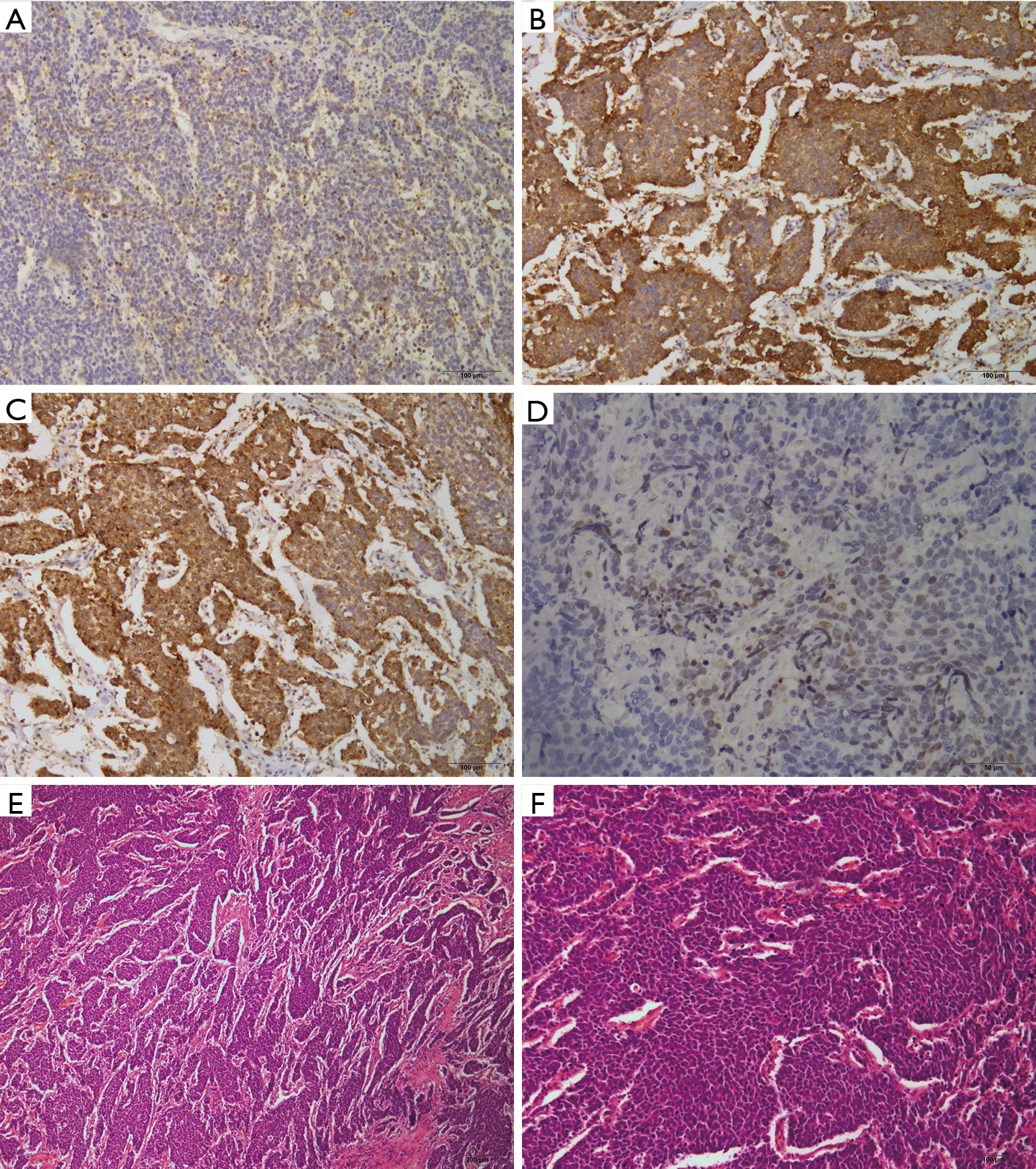 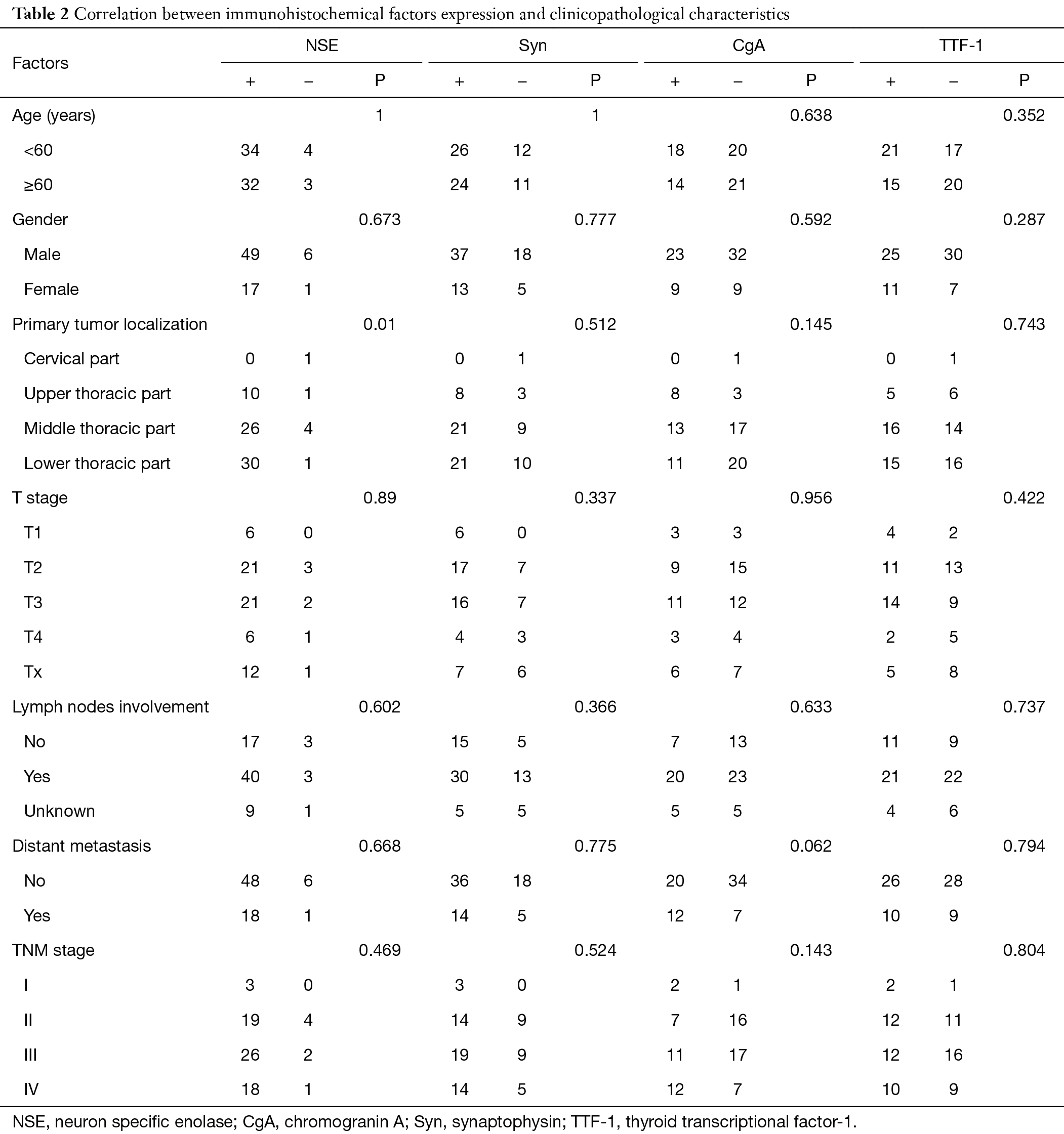 Relationship between clinicopathologic variables and survival

Clinicopathologic variables including age, gender, primary tumor location, lymph nodes involvement, distant metastasis, disease stage, surgery or chemotherapy were not prognostic for survival. In contrast, tumor T stage was found to be a prognostic factor for OS. Patients with tumors infiltrating serous layer had poorer survival comparing with those whose primary tumor is within serous layer (P<0.001). Although not statistically significant, expression of any of four factors was tended to positively affect survival (Table 1, Figure 2A-D) Therefore, further analysis was proceeded to explore the prognostic value of different marker combinations. The results showed the median OS of patients without expression of four factors was significant worse than those with at least one factor of positive expression (6.1 vs. 15.3 months, P=0.002) (Figure 2E). Any factor significant in univariate analysis was subjected to multivariate analysis using the Cox regression model. The results showed that high T stage was not an independent prognostic factor [hazard ratio (HR) for OS, 1.091; 95% confidence interval (CI), 0.889–1.337; P=0.405], but lack of four markers expression remained significantly associated with worse OS [HR, 0.265; 95% CI, 0.1–0.703; P=0.008). 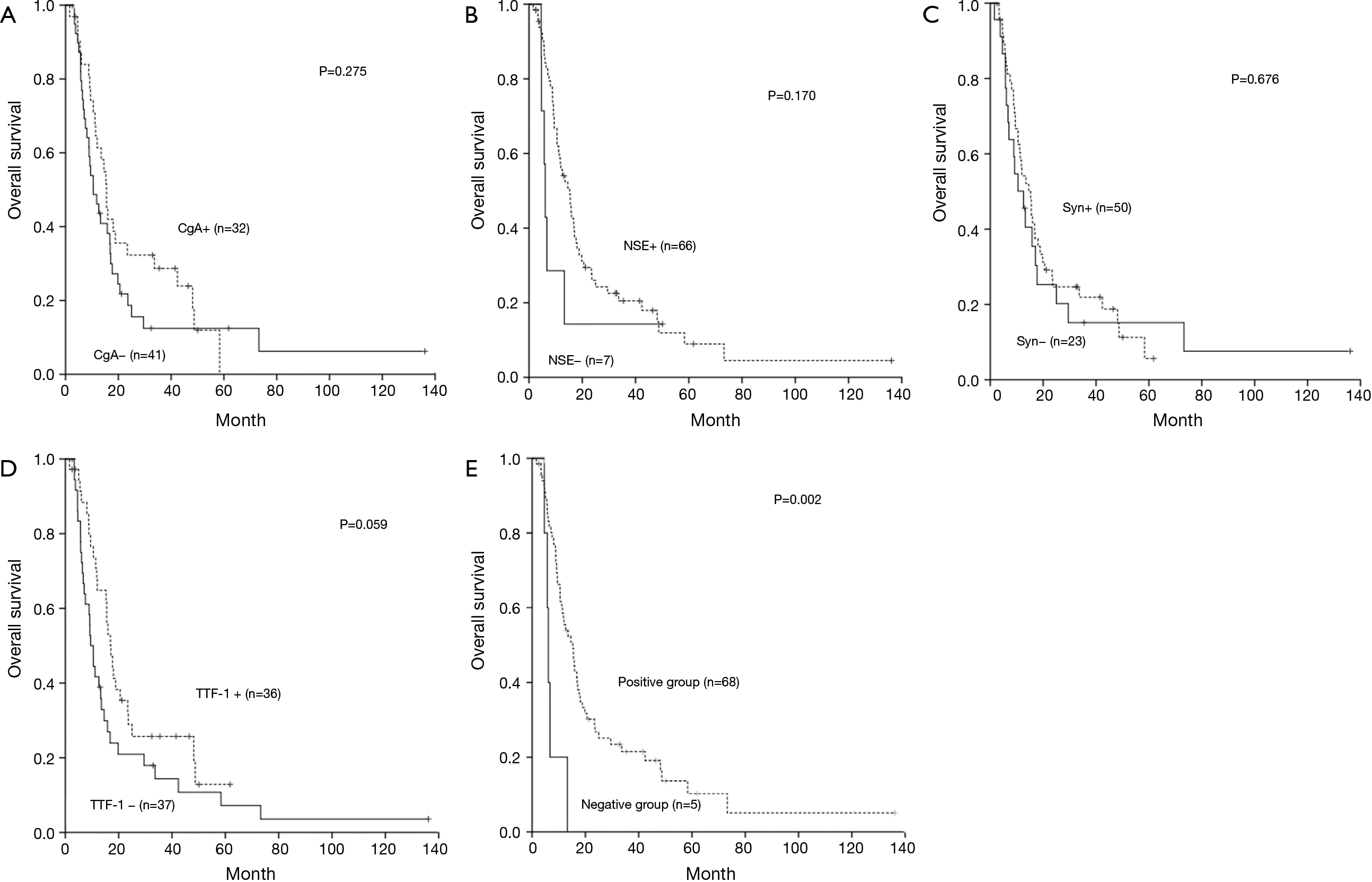 Primary ESCC, a high malignancy with early metastasis and unfavourable prognosis, is a rare disease (10). The incidence of ESCC is approximately 0.4–7.6% of all esophageal carcinoma worldwide (11). According to previous reports from Chinese population, the proportion of ESCC was only about 0.5% of esophageal malignancies. The median survival and 2-year survival rate was 18.3 months and 28.6%, respectively (4). In the present study with 73 patients, the median survival was only 13.5 months and 2-year survival rate was 24.8% although more than 60% of patients have received multiple therapy, including systemic chemotherapy and local treatment (most likely radiotherapy or surgery). Consistent with other survival reports with survival range of 7 to 19 months, the results indicted again that the ESCC was a rare and highly malignant disease (12-15).

ESCC is a kind of malignancy having high histological and clinicopathologic heterogeneity. Initially, ESCC was thought to originating from the argyrophilic Kulchitsky cells in esophageal epithelial layer (16). These cells could synthesize and store amines and have the ability to decarboxylate some amino acids, which produce amine precursor uptake and decarboxylation (APUD) cells (17,18). These findings support the theory that ESCC shares similar histology to other neuroendocrine tumors (NETs), such as small cell cancer (SCC) of lung. In addition, one other thing to note is the existence of primary ESCC with coexistent adenocarcinoma and/or squamous cell carcinoma (19). Useful neuroendocrine markers (Syn, NSE and CgA) and TTF-1 may be of use in the diagnosis of well-differentiated NETs (20). In conjunction with clinical findings and cytomorphology, immunohistochemistry has become an indispensable tool in clinical practice (21).

The previous reported percentage of ESCC samples with positive immunoreactivity was Syn 95.2–100%, TTF-1 21.4–71.4%, NSE 61.9–100%, CgA 53.3–67% (4,5,12,22,23). The positive expression of four proteins in the present study was Syn 68.5%, TTF-1 49.3%, NSE 90.4% and CgA 43.8%. One possible explanation for the difference of expression rates was heterogeneity in histology of esophageal malignancy and tumor differentiation. A recent report demonstrated that 38.4% of ESCC was mixed with adenocarcinoma, squamous cell carcinoma or large cell neuroendocrine cell carcinoma. Moreover, the level of IHC markers expression may vary in different histological typing. For instance, expression of Syn was more frequently observed in patients with adenocarcinoma than those with squamous cell carcinoma (12,24). TTF-1 is commonly expressed in poorly differentiated NECs regardless of the site of origin (25,26). The expression of CgA decreased with increasing malignancy, being lowest in high-grade neuroendocrine carcinoma (NEC) (27). The second possible reason was that the technique of immunohistochemistry was not precise enough for detection of small amount of protein. And different authors propose different cut-off points for percentage of stained endocrine cells. Thirdly, the subjectivity bias of results judgement was inevitable. Therefore, in results analysis section of the study, patients with different positive expression levels were all categorized into positive group, which can reduce bias to some extent. In future studies, further investigation of gene status combined with protein expression might be a helpful supplement.

Several previous studies showed that neuroendocrine markers usually have distinct features such as deep invasiveness, early dissemination, massive tumor or hormonal non-functionality (28-30). Unlike these studies, we could not find any relation between markers expression and gender, age, regional lymph node involvement, or TNM stage.

The prognostic significance of specific markers in ESCC had not been extensively studied and remained unsettled. Most previous analysis of ESCC was incorporated in the general NEC. These studies showed that in advanced gastrointestinal NEC (GI-NEC, encompass small-cell NEC and large-cell NEC), Ki67 proliferative index was a prognostic marker, that patients with Ki67<55% or 60% had better survival than patients with Ki67≥55% or 60% (31,32). Our study included a large sample size and analyzed protein expression of specific markers using IHC and their prognostic value in patients with ESCC. The results failed to testify the prognostic value of Ki67, but showed that negative TTF-1, NSE, Syn or CgA staining was related with a poor survival. In a study enrolled 125 Chinese patients with ESCC showed patients with higher CgA protein expression had a superior long survival than those without CgA expression (P=0.037) (33). Studies about other types of tumor concluded that the percentage of tumor cells with the ability to produce neuroendocrine markers was a significant independent prognostic factor associated with favorable outcomes (24,34,35). Dariusz M.’s study showed that the 12- and 24-month survival rate of patients with Syn expression was 64% in non-small-cell lung cancer, while for patients without expression it was 46% and 16%, respectively. The 12- and 24-month survival rate of patients with CgA expression was 80%, while for CgA-negative patients it was 47% and 19%, respectively (24). Tan D’s study showed patients with expression of TTF-1 had a median survival of greater than 57.3 months, while the survival time was only 39.4 months for patients with TTF-1-negative tumors (P=0.006) (35). In gastric signet ring cell carcinoma, there was also a significant correlation between CgA positivity and favourable prognosis (36). In the present study, a trend toward better survival outcome was observed in patients with any of these factors expression. When compared with patients with at least one factor expression, patients without expression of four factors had statistically significant worse survival (6.1 vs. 15.3 months, P=0.002). Therefore, we have reason to believe that the combination test of Syn, TTF-1, NSE and CgA have prognostic value, which helps us to select population benefit less from current therapy. For patients without these proteins expression, novel chemotherapy regimens or targeted drugs are in urgent need of research.

Ethical Statement: The study protocol was approved by the Ethic Committee of Zhejiang Cancer hospital, Hangzhou, China (No. IRB-2018-139), and was performed in accordance with ethical principles of the Helsinki Declaration.