Oesophageal cancer is one of the least studied and deadliest cancers throughout the world because of its extremely aggressive nature and poor survival rate (1). The incidence of oesophageal cancer is also high in China. Additionally, patients with oesophageal cancer are prone to early lymph node metastasis and distant metastasis, and local invasion is also commonly observed (2,3). Even after systematic treatment, the 5-year survival rate for this disease is still low (4). The Comprehensive Registry of Esophageal Cancer in Japan [2010] showed that the 5-year survival rates of patients treated using endoscopic mucosal resection, concurrent chemoradiotherapy, or oesophagectomy were 85.5%, 27.3%, and 55.5%, respectively (5).

In the treatment of oesophageal cancer, surgical treatment has always been the first choice for radical treatment (6). At present, routine preoperative evaluation of patients with oesophageal cancer includes the enhancement CT, which defines the lesion range, lesion extent and degree of external invasion (4,7). However, for the evaluation of the overall length of the lesion and its relative spatial location, the use of CT is limited.

Enhanced CT of the stomach is mainly used to assess the relationship between the gastric lymph nodes and the left gastric artery (8). The main examinations used to assess the location of the lesion are gastroscopy and upper gastrointestinal radiography. Of these methods, gastroscopy assesses lesion location mainly by measuring the distance from the central incisor to judge the segmentation of the lesion (9). However, this method is affected by individual factors, such as height and upper body length.

Patients presented to the Department of Thoracic Surgery at the First Hospital of Jilin University from January 2014 to August 2015 were selected.

A total of 72 patients were recruited, including 62 males and 10 females. The First Hospital of Jilin University approved the study protocol, and all the patients provided written informed consent for the procedure (number of ethnic approval: 2014122).

Enhanced chest CT and enhanced stomach CT were enhanced using the Discovery TM 64 CT. The patients were positioned with their head forward in a supine position with their hands held up to their head. The scan ranged from the thoracic inlet to the umbilicus and used DICOM format image data.

We collected patients’ information according to the inclusion and exclusion criteria. Data collection included enhanced chest CT and enhanced stomach CT DICOM files. Databases were built by Excel. We then imported files into Mimics’ 3D reconstruction software and browsed the original DICOM format two-dimensional images layer-by-layer. Using application software with tools, CT values and other specific parameters were measured from the two-dimensional images of the lesion location. The CT values for normal oesophageal tissues and diseased oesophageal tissues were measured and entered into the form.

We subsequently created a blank layer and applied the surface editing software to edit and dye the location of the lesion according to the measured CT value. Then, the edited image file was created layer-by-layer to completed layer dyeing of the lesion. We then created a new blank layer and applied the surface editing software again to complete the labelling and dyeing of the adjacent tissue around the lesion. The layers of the tumour and adjacent tissues were reconstructed by surface reconstruction, and the reconstruction results could be displayed individually or in combination with display and multi-angle observation to assess the size, location and adjacent relationship of the tumour (Figures 1-6). 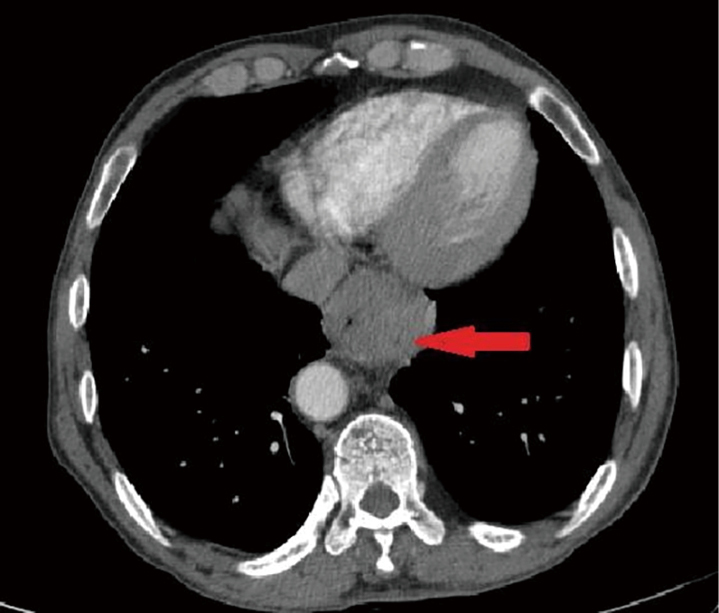 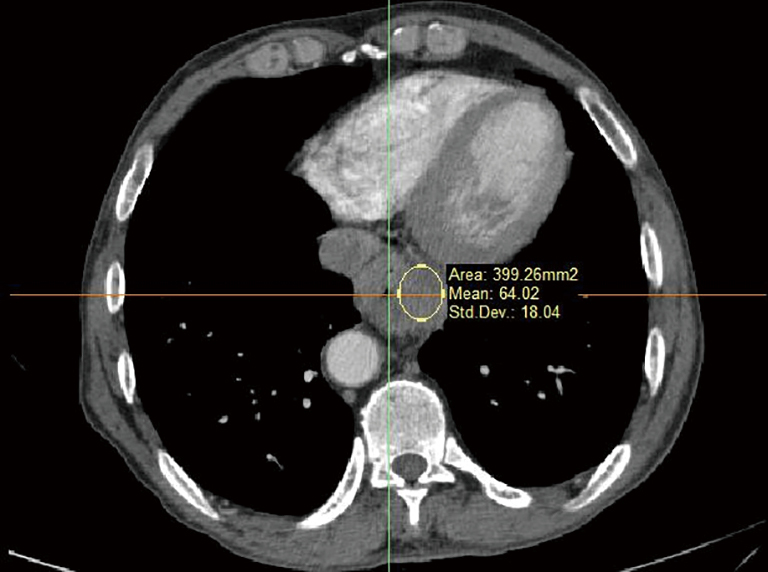 Figure 2 Measurement of the CT value of the lesion location.

Figure 3 CT dyeing according to value. 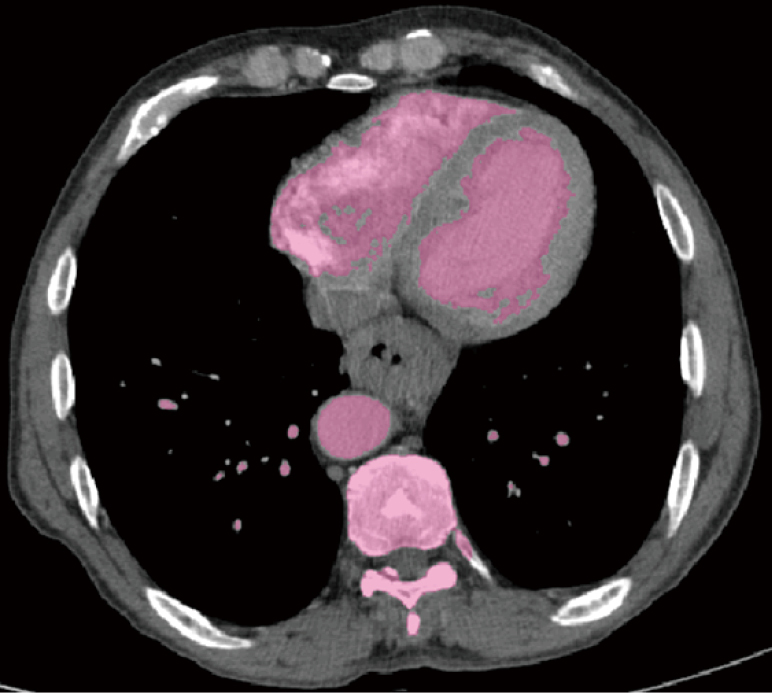 Figure 5 The reconstructed lesion (blue), vessels (yellow) and bronchi (purple) and the length, location, and adjacent relationships to the tumour, with measurement of the lesion length by the tool. 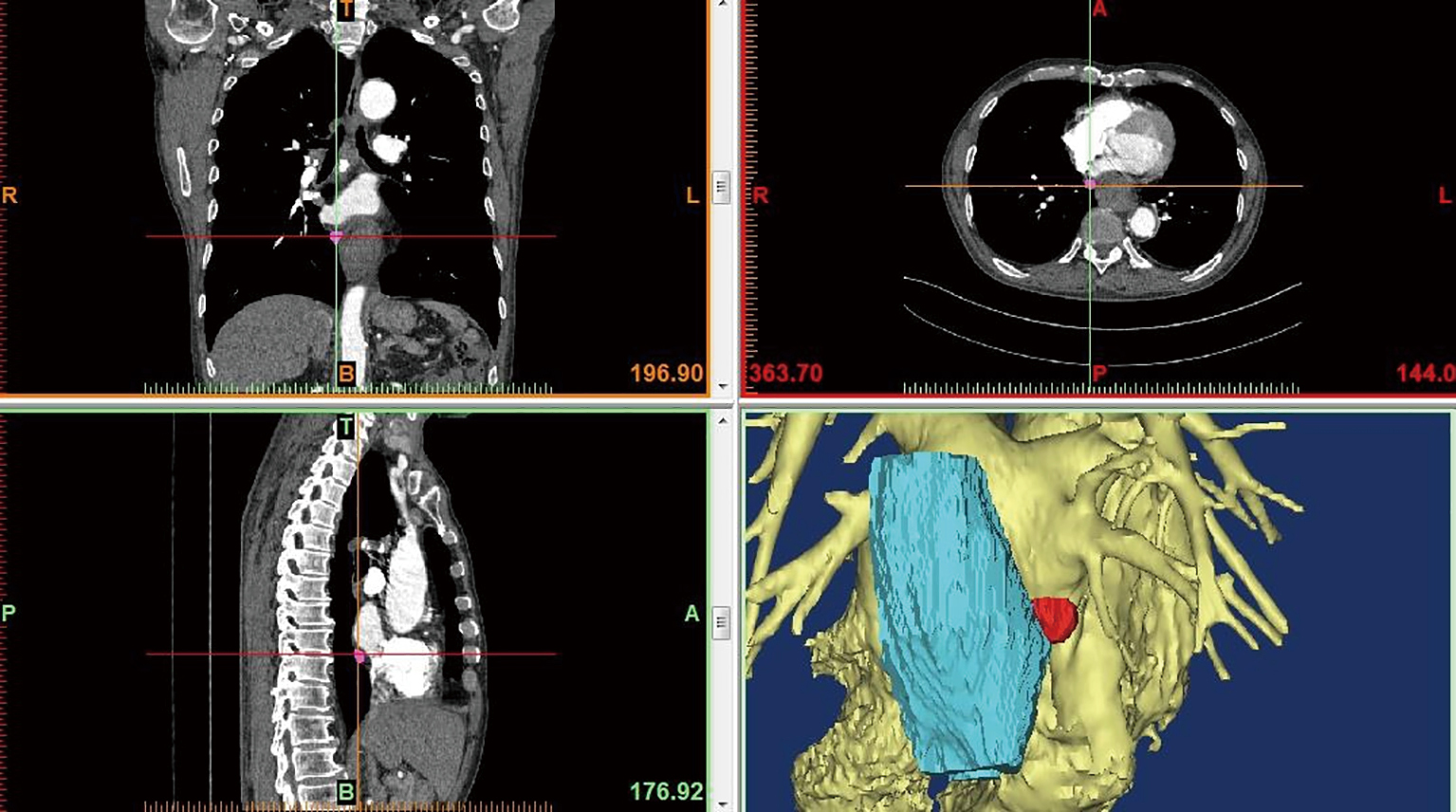 IBM SPSS 19.0 was used to analyse all the data. All the data were averaged over three measurements. The t-test was used to compare the means of the two groups, and variance analysis was used among the groups, where P<0.05 indicated a significant difference.

The age of the patients ranged from 45 to 85 years, and the average age was 61.3 (8.6) years. Gastroscopy was performed on all the patients. The gastroscope was able to pass through the oesophagus successfully in 48 cases but was unsuccessful in 24 cases. The location of the lesion ranged from 30 to 42 cm among the 48 cases. Detailed information is shown in Table 1 by sex groups.

In the reconstructed data of positive lymph nodes, the length, diameter, volume, CT value and reconstruction of the lymph nodes in the negative group were significantly different compared with the positive group. Details are shown in Table 4.

This new method is superior to traditional gastrointestinal radiography and gastroscopy for observing the location of the diseased section of the oesophagus and for determining the surgical approach. In addition, the length and extent of the lesion are also important for the choice of treatment modality (15). The length and extent of the lesion are usually determined by gastroscopy. In this study, as a result of pathological changes, there were 24 cases that could not undergo gastroscopy, accounting for 33.3% of all the patients. For this portion of patients, only by using 2D images of the lesion could the cumulative level of the lesion’s specific length and range be estimated, and this method is not only low in accuracy but also has uncertainty for planning surgical treatment (16). The application of 3D reconstruction helps to evaluate the tissue and vessels prior to surgery, which improves the accuracy of assessment of the extent of disease. Furthermore, it is known that the malignancy of the tumours is associated not only with their length and volume but also with the degree of peripheral lymph node invasion and value of CT. In addition, 3D reconstruction of the oesophagus has a large advantage for the evaluation of the effects of chemotherapy and radiotherapy. Through 3D reconstruction, we can clearly observe changes in tumours and in the size of peripheral lymph nodes. Thus, the method used in this study is optimized for the standard of T-stage tumours. Thus the method in this study optimize for evaluating the lesion’s T stage before operation.

It is important for rational diagnosis and treatment strategies to define the range of oesophageal carcinoma using 3D reconstruction.

As far as we know, this study is the first report on the application of 3D oesophageal reconstruction in China. In addition, the image technology used in this study is superior to that used in previous research. However, there are still some limitations that should be mentioned. First, the sample size of this study may have been small, but it is still sufficient to describe the advantages of 3D oesophageal reconstruction compared with traditional methods. Second, all the patients were from a single centre—the First Hospital of Jilin University. Finally, a detailed point-to-point validation of fusion images was not performed.

Ethical Statement: The study was approved by The First Hospital of Jilin University (No. 2014122) and written informed consent was obtained from all patients.