Lung cancer remains the leading cause of cancer mortality worldwide. The incidence of recurrence or distant metastasis after complete resection of primary tumors is reported to be 37%, even in patients with stage I non-small cell lung carcinoma (NSCLC) (1).

Recently, the treatment for lung cancer has diversified dramatically and the indication of such treatment is determined according to pathological and cytogenetic features, the EGFR gene status, fusion genes consisting of echinoderm microtubule-associated protein-like 4 and anaplastic lymphoma kinase, and the appearance of the immune checkpoint inhibitor. The newly introduced treatment with epidermal growth factor receptor-tyrosine kinase inhibitors (EGFR-TKIs) among patients with EGFR-mutated NSCLC is associated with response rates of 56–74%. Despite its high response rate, however, most patients experience tumor progression within 1 to 2 years after the treatment (1).

When tumor recurrence or progression occurs, the biological and genetic changes of the tumor should be reassessed, because biological features and histological characteristics of the primary tumor are occasionally different from those of the recurrent site. Regarding the mechanisms of acquired drug resistance to EGFR-TKIs in EGFR-mutated NSCLC, some investigators have suggested an association with a secondary mutation in EGFR T790M or other mechanisms that do not involve signaling through EGFRs, such as MET or HER2 amplification (2,3). Histological transformation from adenocarcinoma to small cell lung carcinoma (SCLC) (2,3) or squamous cell carcinoma (SCC) (4) has also been reported as a mechanism of acquired resistance. However, there are few reports on SCC transformation from adenocarcinoma in NSCLC.

We herein report a case of a resected lung adenocarcinoma that showed SCC transformation of a recurrent lesion of the pleura after administration of EGFR-TKIs.

A 62-year-old man with neither a smoking history was referred to our hospital, because an abnormal nodule in the right upper lung field was detected on radiography during a medical check-up. Computed tomography (CT) demonstrated not only a spiculated mass in the right upper lobe of the lung, 33 mm × 17 mm in size (Figure 1A). Positron emission tomography revealed accumulation in the tumor; the maximum standardized uptake value was 7.0. As these findings were highly suggestive of malignancy, the patient underwent thoracoscopic right upper lobectomy followed by mediastinal lymph node dissection. 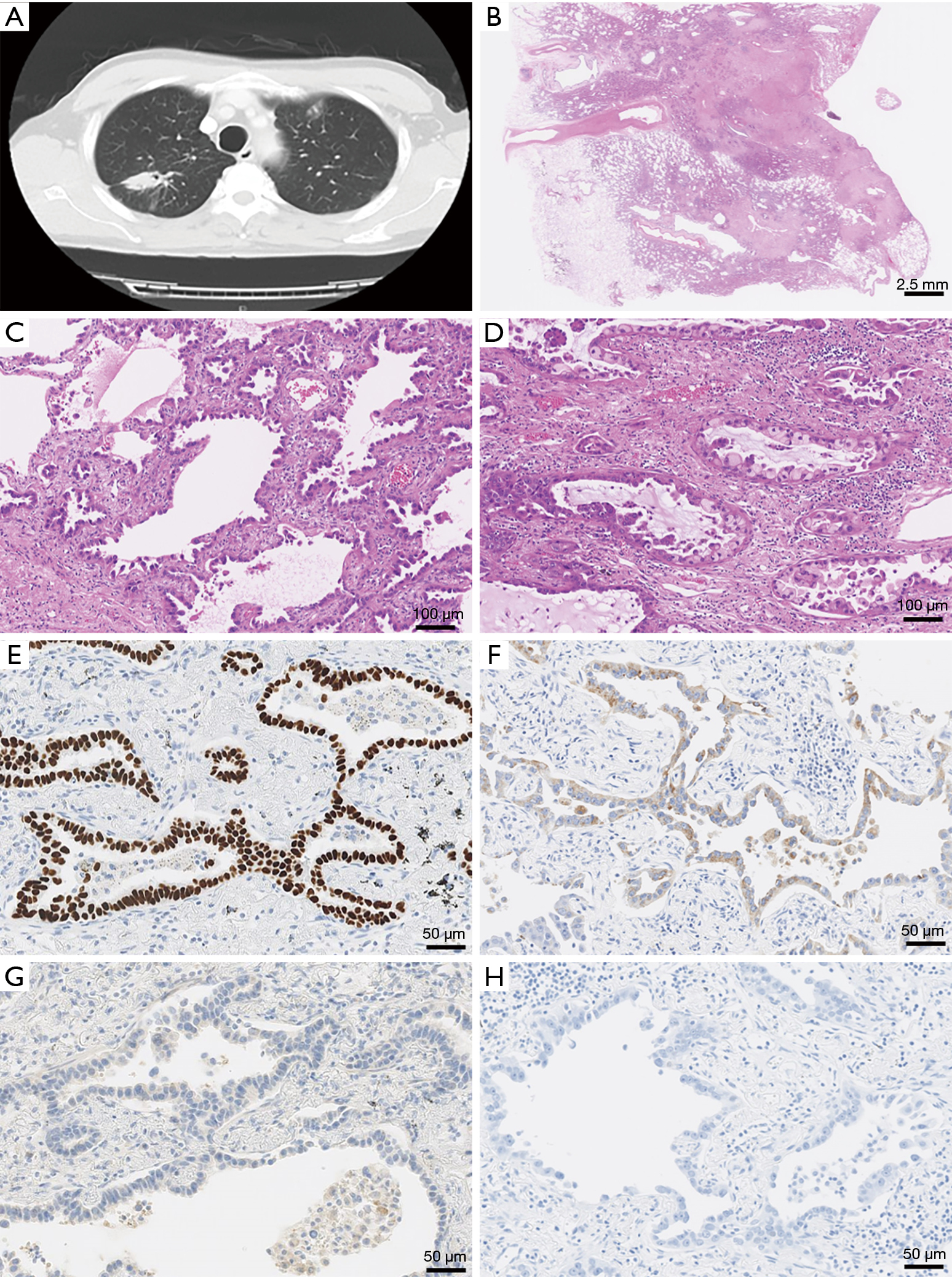 Figure 1 Characteristics of primary lung carcinoma. (A) Chest computed tomography scan demonstrates a spiculated mass, measuring 33 mm × 17 mm in size in the right upper lobe; (B) a scanning magnification of it shows a proliferation of atypical epithelial cells with desmoplastic stroma [haematoxylin and eosin (HE) stain, magnification is ×1]; (C,D) histologic analysis shows a proliferation of atypical epithelial cells arranged in a papillary, lepidic or acinar growth structures (HE stains, ×100); (E,F) immunohistochemically, the specimen is positive for TTF-1 (E) and napsin A (F) (×200); (G,H) immunobiological staining of p40 (G) and CK5/6 (H) are negative (×200).

Microscopically, the upper lobe-resected specimen showed proliferation of atypical epithelial cells arranged in a papillary predominant growth structure and locally in an acinar growth fashion with desmoplastic stroma (Figure 1B,C,D). Immunohistochemically, the tumor cells were positive for thyroid transcription factor-1 (TTF-1) and napsin A, whereas they were negative for p40 and CK5/6 (Figure 1E,F,G,H). Although we are examined all specimen, are not recognized atypical polygonal cells or keratinizing cells, representing squamous differentiation. These features suggested an invasive adenocarcinoma. The postoperative course was uneventful, and the patient started receiving tegafur/uracil after surgical resection. On gross examination, upper lobe resected specimen, the cut surface revealed an underlying well-defined lobulated gray white solid firm mass, measuring 35 mm × 30 mm, with central scarring and anthracotic pigmentation. The background of the lung had no remarkable change, i.e., not emphysematous.

Six months after surgery, CEA levels increased to 10 ng/mL (normal <3 ng/mL). CT revealed the pleural tumor destroying the right fifth rib (Figure 2) and osteolytic changes in the 12th thoracic spine. In light of these findings, the patient was diagnosed with postoperative recurrence. As an activating EGFR mutation (exon 21 L858R point mutation) was detected in surgical specimens of the primary tumor, gefitinib treatment was initiated (Figure 3A). Follow-up CT revealed tumor regression 1 month after treatment; however, tumor relapse was observed 3 months after tumor regression. The pathological findings of the re-biopsied specimen obtained from the pleural tumor showed proliferation of atypical polygonal epithelial cells with a few dyskeratotic cells and a desmoplastic stroma (Figure 2). Immunohistochemically, the atypical cells were positive for p40 and CK5/6, and negative for TTF-1 and Napsin A (Figure 2). These features were suggestive of a poorly differentiated SCC. The activating EGFR mutation was detected in the recurrent tumor, similar to that in the primary lesion (Figure 3B). Although chemotherapy with cisplatin plus pemetrexed was administered as second-line chemotherapy, the patient died due to carcinoma progression 6 months after second-line chemotherapy. 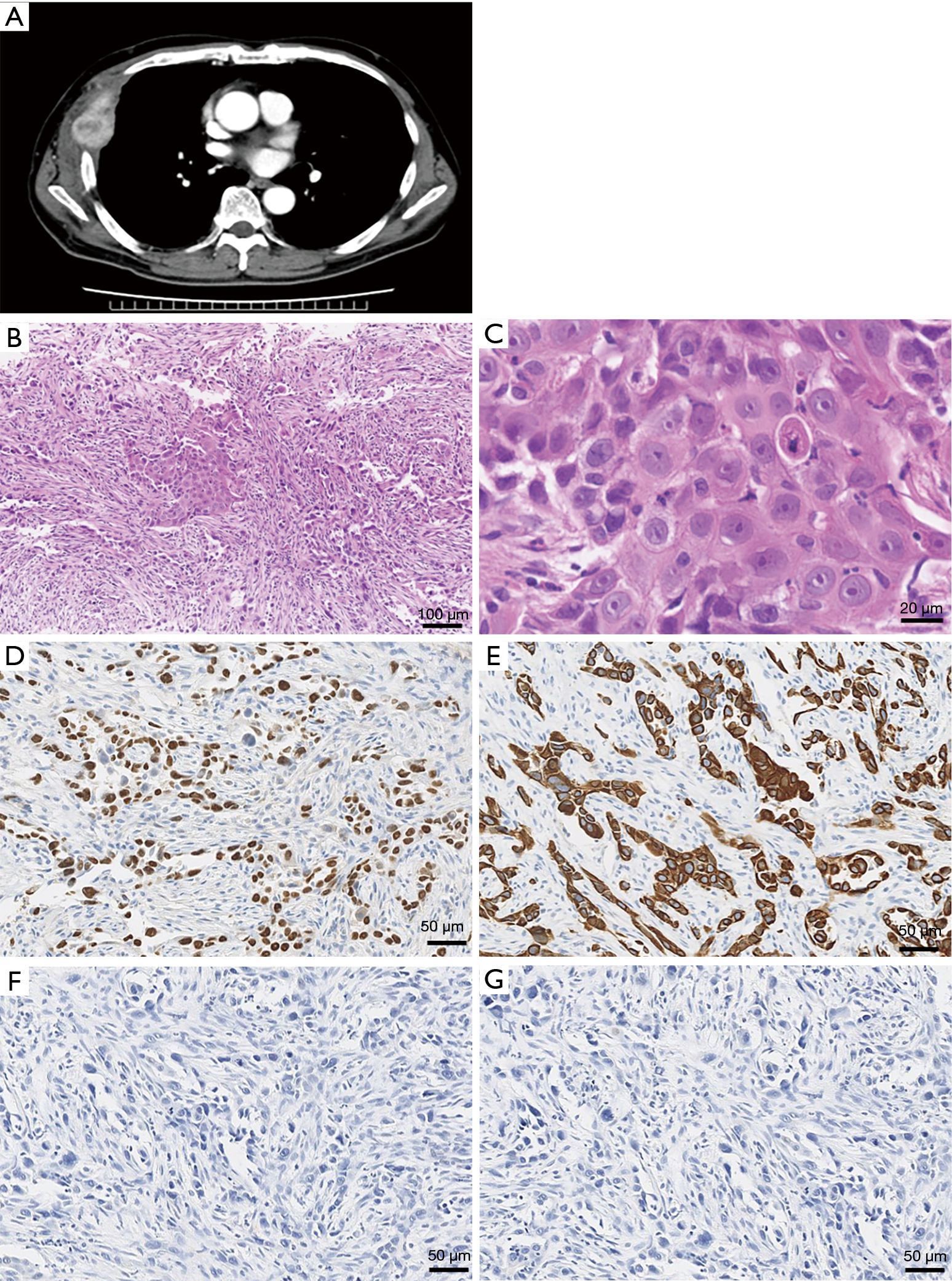 To date, two genotypic mechanisms of acquired drug resistance have been confirmed in patients who acquire resistance to EGFR-TKIs. A secondary mutation in EGFR (T790M) abrogates the inhibitory activity of TKIs and amplification of the MET receptor tyrosine kinase, which activates downstream intracellular signaling independent of EGFRs (5). Recently, some investigators reported other mechanisms, including PIK3CA mutations and SCLC transformation (2,3). Although histological transformation is an important factor indicating the individual treatment for patients with lung cancer, SCC transformation from adenocarcinoma is extremely rare.

The histological transformation from adenocarcinoma to SCC after treatment with EGFR-TKIs has been reported in five cases of EGFR-mutant stage IV lung carcinoma (4,6). In all cases, there was the same type of EGFR mutation in both the first and second biopsy specimens and this finding indicated that the transdifferentiation was occurred from adenocarcinoma to SCC. Although these findings were similar to those of our case, the pathological evaluation in the previous reports was performed by the limited biopsy specimens of the primary tumor such as transbronchial lung biopsy, not surgically resected. Therefore, it seems practically difficult to confirm the possibility of the true histological transformation because of a small number of cancer cells in the primary and/or recurrent tumor or the presence of adenosquamous cell carcinoma or the combined case of adenocarcinoma with SCC. To the best of our knowledge, this is the first case demonstrating SCC transformation from adenocarcinoma of the lung after administration of EGFR-TKIs by evaluating the whole resected primary lesion. Little is known about the exact mechanisms that lead to this transformation, however potential explanations for this observation include that (I) malignant cells acquire a different phenotype under the pressure of EGFR inhibition (metaplastic transformation); (II) both types of cells coexist in the original tumor mass, but only adenocarcinoma cells are sensitive to EGFR inhibition, giving selective advantage to the squamous cell component; or (III) development of a second primary cancer (7). Although three hypotheses have been proposed to explain it, our pathological findings can deny the second hypotheses we should regard a pleural tumor with same EGFR profile of lung cancer cell occurred as a metastatic lesion.

In conclusion, we reported SCC transformation at a recurrence site of the pleura from adenocarcinoma of the lung after treatment with EGFR-TKIs in a patient who underwent complete resection of the lung. It is clinically important to manage acquired resistance to EGFR-TKI therapy in EGFR-mutated NSCLC. Although a recent study demonstrated that acquaintance of T790M was confirmed by liquid biopsy (8), we recommend re-biopsy of growing tumors or recurrence sites for evaluating the information of tumor characteristics and acquired resistance to the EGFR-TKI therapy, as this may be useful in improving treatment selection.