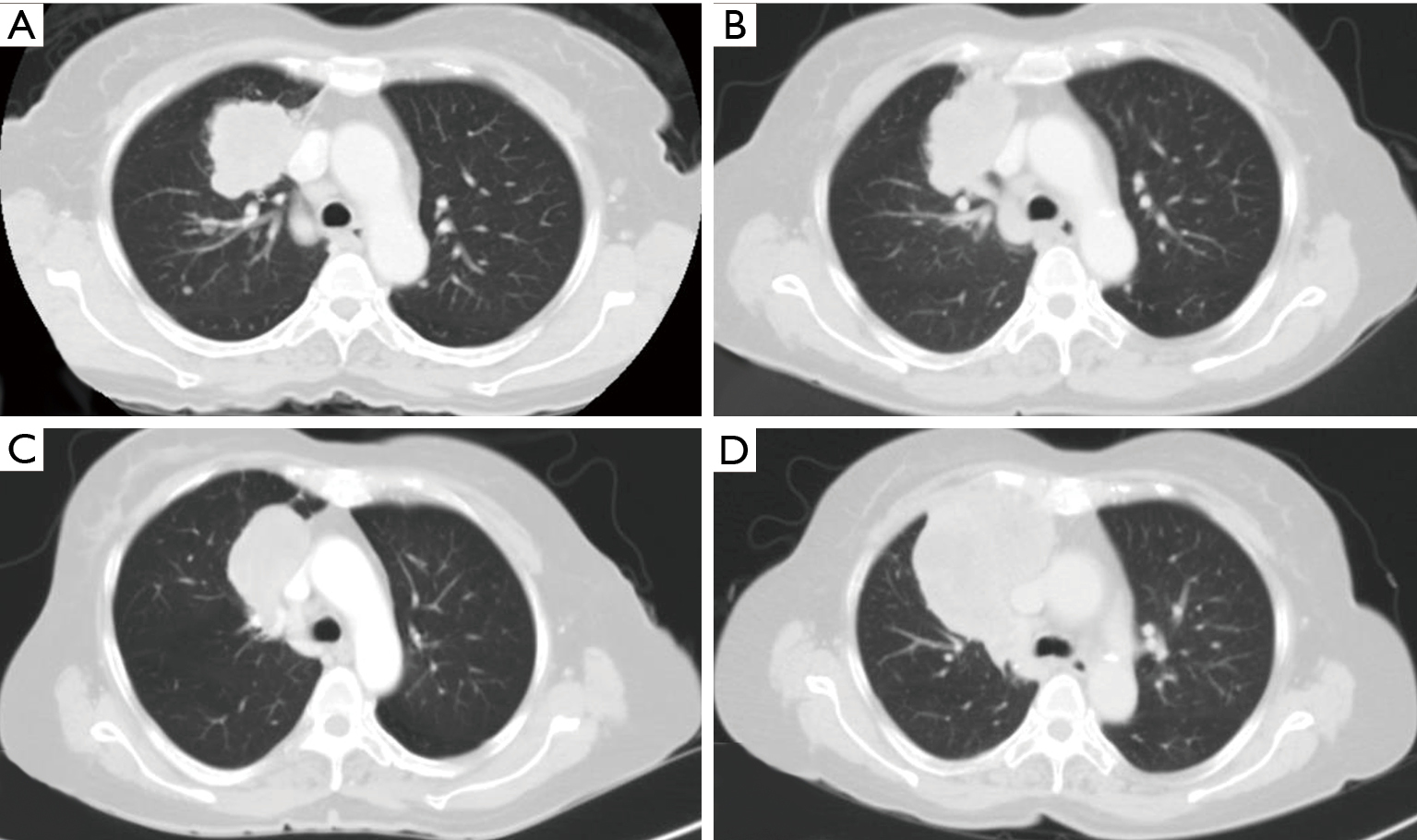 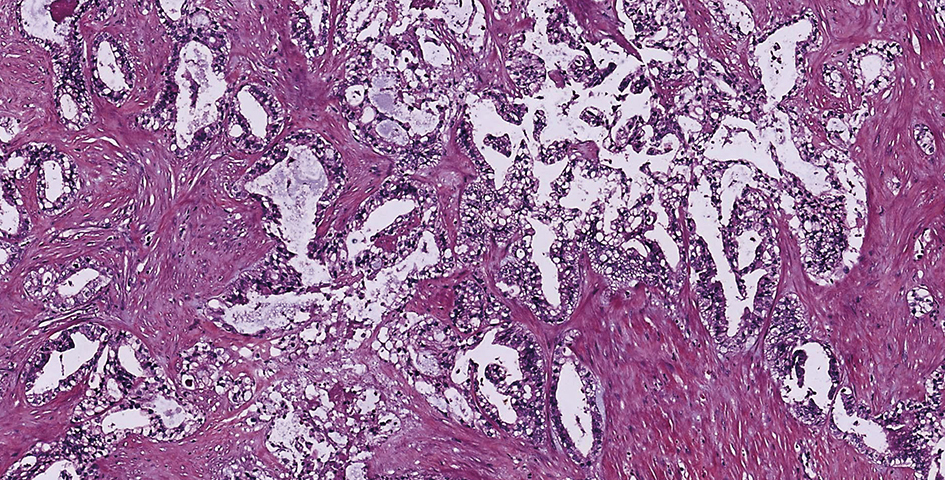 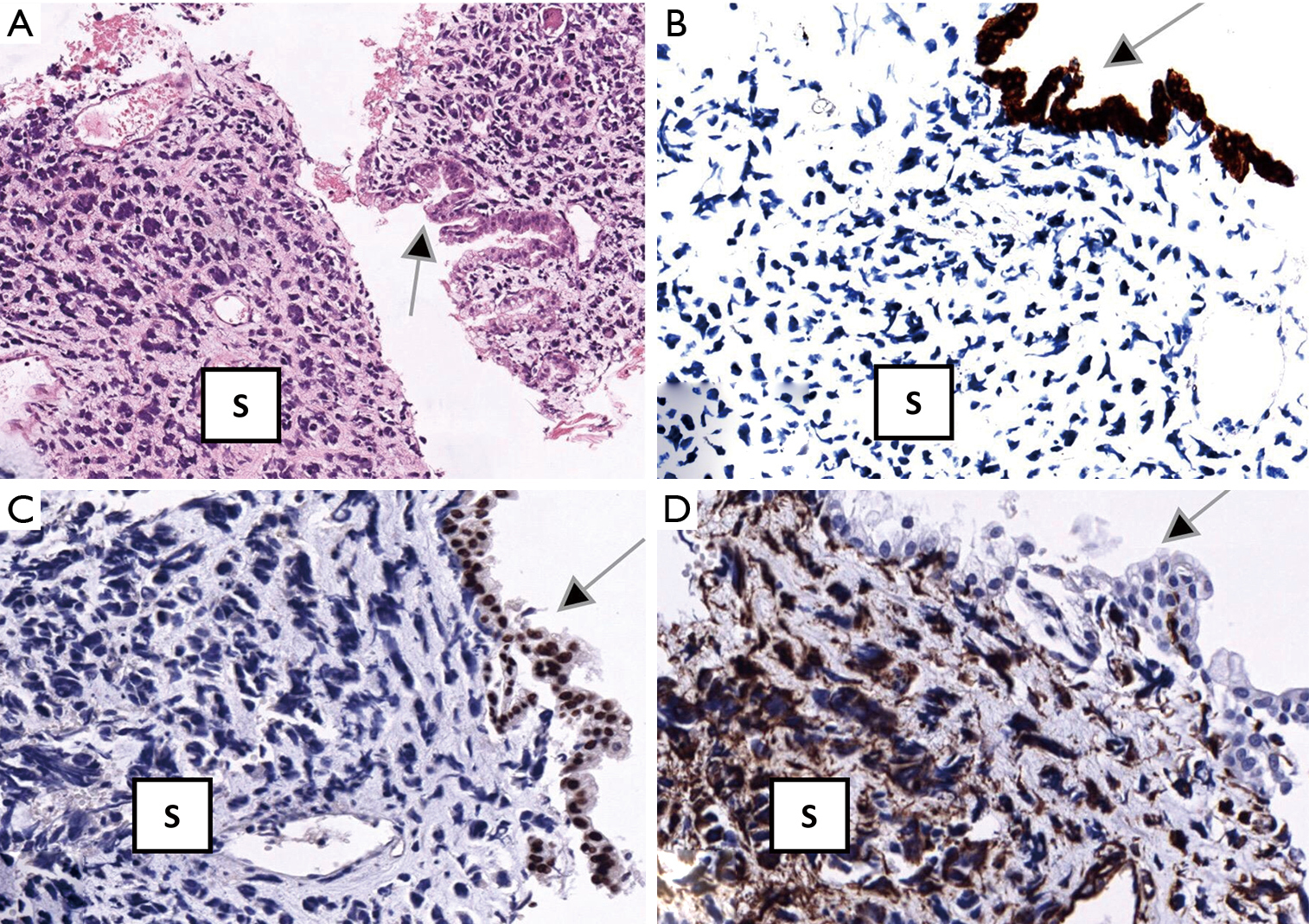 She succumbed to rapid PD in August 2017 before the initiation of systemic chemotherapy.

To our knowledge, this is the first reported case of EMT causing acquired resistance to the second-generation EGFR-TKI, afatinib in a patient with advanced NSCLC harboring a sensitizing EGFR mutation. EMT has by far only been reported as a likely mechanism of acquired resistance in afatinib-resistant cell lines but not in patients (1).

In EMT, epithelial cells transform to mesenchymal stem cells by losing their cell polarity and cell-to-cell adhesion, gaining invasive and migratory properties, accompanied by upregulation of anti-apoptotic signals and changes in the expression of molecular marker proteins, i.e., down-regulation of E-cadherin and up-regulation of vimentin, fibronectin, and N-cadherin (2). Expression of mesenchymal markers correlates with a poor prognosis and an inferior response to EGFR-TKIs in non-small cell lung cancer (NSCLC) (2). The sarcomatous elements in this patient were immunoreactive to vimentin, a canonical marker consistent with EMT despite N-cadherin and fibronectin not performed.

Acquired resistance due to EMT has rarely been reported in patients treated with gefitinib and erlotinib (3). In 37 EGFR-mutated patients treated with erlotinib or gefitinib, EMT was detected in only three patients on rebiopsies at disease progression (3). Interestingly, EMT has not been described as a resistance mechanism to afatinib in NSCLC patients (4). EMT which may co-exist with other resistance mechanisms causing EGFR-TKI treatment failure may be underdiagnosed due to the infrequent performance of tissue rebiopsies and overreliance on liquid biopsies.

Interestingly, upon PD to afatinib, both circulating tumour DNA (ctDNA) and lung biopsy were negative for the original EGFR mutation. Concordance rates between ctDNA and tumor tissues for common EGFR mutations in the literature have a wide variation ranging from 27.5% to 100% (6) with pooled sensitivities from two meta-analyses reported to be 67.4% and 62%, and specificities of 93.5% and 95.9%, respectively (7,8). Despite epithelial cells being present in the lung specimen, these cells do not exhibit the original EGFR mutation, thus suggesting that these cells have developed acquired resistance, possibly through the loss of the mutant EGFR gene allele which has been reported in cell lines resistant to first-generation TKIs (9).

Therapeutic strategies to reverse EMT in patients with acquired resistance to EGFR-TKI include blocking M2 muscarinic receptor signalling (10), targeting EMT with histone deacetylase inhibitors such as entinostat (11) and MEK-inhibitors such as selumetinib (2), inhibition of microRNAs (12), immunotherapy (13); and inhibiting fibroblast growth factor receptor-1 (14).

This is the first report of EMT causing acquired resistance to afatinib treatment in a patient with a sensitizing EGFR-mutant NSCLC.

Informed Consent: The patient’s son has given informed consent for the case report to be written and published without any identifying information.