Where are we with treatment options after first line in small cell lung cancer?—report of two opposite cases treated with CAPTEM regimen and possible perspectives

With platinum-etoposide doublets, oncologists have long been used to “play it safe” in first line setting of extensive disease small cell lung cancer (ed-SCLC) patients. Instead second line treatment was historically considered a stumbling block, hard to handle both for patients and clinicians, where all the expectations are quickly disappointed. To date chemotherapy is still the only way forward, so it is essential to consider clinical outcomes of first line treatment, to correctly evaluate second line one (1). Even making the proper distinctions between “platinum refractory” (patients with progressive disease during initial chemotherapy or relapse within three months) and “platinum sensitive” (patients who relapse after three months), treatment options are limited (2). In this setting, combination chemotherapy showed similar outcomes, compared to single agent topotecan, which is the preferred option in clinical practice (3,4). The recommendation of European Society of Medical Oncology (ESMO) for second line treatment of ed-SCLC provide for refractory patients to participate in a clinical trial or best supportive care, for patients having resistant or sensitive relapse, single agent topotecan (or alternative anthracycline-based regimens), and for patients with sensitive relapse reintroduction of the first-line regimen (5). Even considering all these variables, the reported objective response rate (ORR) does not exceed 20% (2-5).

It has long been known that somatostatin receptors are expressed also in poorly differentiated neuroendocrine lung tumors (6). Few clinical trials investigated alternative therapeutic options, which considered the neuroendocrine nature of SCLC, probably due to biological aggressiveness of SCLC, which is not suitable for cytostatic treatment alone. A phase II/III study with long acting somatostatin analogues in combination to antineoplastic agents concludes that these agents “could be used as an additive therapy” (7).

Some clinical experiences reported the rationale and the feasibility of treatments with single agent temozolomide and capecitabine in extrathoracic neuroendocrine tumors, including poorly differentiated ones (8-10). Many studies and case series reported encouraging results with combination chemotherapy of temozolomide and capecitabine (CAPTEM) in second line treatment of prevalently well-differentiated neuroendocrine tumors (11-14). In well-differentiated neuroendocrine neoplasms, using a methylator such as temozolomide, under continuous exposure to an antimetabolite such as capecitabine, could be synergic. High expression of O6-methylguanine DNA methyltransferase (MGMT), a DNA repair enzyme, is associated with cancer cell resistance to alkylating agents such as temozolomide; the initial single capecitabine administration seems to cause the depletion of the MGMT gene, which makes the tumor chemosensitive to temozolomide (15). MGMT inactivation due to promoter methylation could have a positive predictive role for treatment with methylating agents such as temozolomide and eventually correlate with a better prognosis (16-18). Correlation between MGMT protein expression, assessed by immunohistochemistry staining, and MGMT promoter methylation, is not uniquely established (19,20). It has been reported that MGMT protein deficiency is common in pancreatic neuroendocrine tumors, while not in carcinoid tumors, and can predict response to temozolomide-based therapy (21). A phase II study of temozolomide in patients with relapsed SCLC, reported a certain activity, particularly for brain metastases. In the same study, the assessment of MGMT methylation status by polymerase chain reaction (PCR) and MGMT expression by immunohistochemistry showed a positive trend of major ORR in patients with methylated tumors, even if not statistically significant, while no correlation with MGMT expression (22). Here we report the cases of two male patients with diagnosis of ed-SCLC treated with CAPTEM regimen after first line chemotherapy, because of the lack of valid therapeutic options in this setting.

Capecitabine and temozolomide association is not approved by Agenzia Italiana del Farmaco (AIFA) for “in label” administration in SCLC patients in Italian hospitals (“Elenco dei medicinali erogabili a totale carico del Servizio sanitario nazionale”, Gazzetta Ufficiale Repubblica Italiana N.1, 2 Gennaio 2009), thus treatment was administered as an “off-label” option, after approval by an institutional review board. This report was performed according to the Declaration of Helsinki and the procedures followed were in accordance with the ethical standards of local responsible bioethical committee on human experimentation. Written informed consent was obtained from the patients to the proposed treatment and for publication of this case report with the accompanying images.

Patients were both heavy smokers with history of chronic obstructive lung disease and without any other significant comorbidities. The schedule consist in oral capecitabine at dose of 750 mg/m2 twice a day, on days 1–14 and oral temozolomide at dose of 125 mg/m2 on days 10–14, with cycles of 4 weeks. MGMT immunohistochemistry assay was performed on formalin-fixed, paraffin-embedded sections, which were deparaffinised in xylene and rehydrated in decreasing concentrations of ethanol. After blocking of endogenous peroxidase with 3% H2O2, the sections were pretreated in an oven with EnVision Flex TRS buffer and immunostained on a DAKO Cytomation autostainer (DAKO, Glostrup, Denmark), using monoclonal mouse anti-human antibody against MGMT (clone MT3.1, MAB16200 EMD MilliporeTM, Billerica, Massachusetts, USA). Immunoreactivity was visualized with DAB+ (DAKO K3468) as chromogen. The immunohistochemical reactions were semiquantitatively evaluated according to the number of tumor cells stained. Responses to treatment were evaluated with computed tomography scan (CT-scan), according to RECIST criteria (Version 1.1) (23).

First patient (patient 1) in April 2016 underwent a CT-scan after onset of worsening coughing and dyspnoea; the exam showed a pulmonary neoplasm in upper left lobe with lymph node metastases (mediastinic and left hilar), bone metastases to the column and intra-pancreatic metastases. The bronchoscopic biopsy confirmed diagnosis of small cell neuroendocrine carcinoma of the lung, with weak/almost absent (0–10%) MGMT immunoreactivity (Figure 1). He came to our attention at age of 69, with Eastern Cooperative Oncology Group Performance Status (ECOG-PS) of 2. From June 6, 2016 to November 11, 2016 seven cycles of Carboplatin (area under curve, AUC 5) plus Etoposide (100 mg/m2) on days 1–3 every three weeks, were administered, with clinical benefit, partial response after 4 cycles and stable disease after 7 cycles. From December 14, 2016 to February 7, 2017 he received 3 doses of intramuscular lanreotide autogel 120 mg (Ipstyl®, Ipsen Pharma Biotech S.A.S, Signes, France) and subcutaneous denosumab 120 mg (Xgeva®, Amgen Technology, Dublin, Ireland), but the CT-scan showed progressive disease to lymph nodes, lung and to central nervous system (CNS). From March 11, 2017 to July 26, 2017 six cycles of CAPTEM regimen was administered, without significant toxicities, continuing treatment with lanreotide autogel and denosumab. In May 2017 the CT-scan showed partial response to lymph nodes and complete response to the CNS (Figure 2); unfortunately after 6 cycles the CT-scan showed progressive disease to the lungs. The patient died in October 2017, after one cycle of third line chemotherapy with topotecan (2 mg/m2), due to respiratory failure. 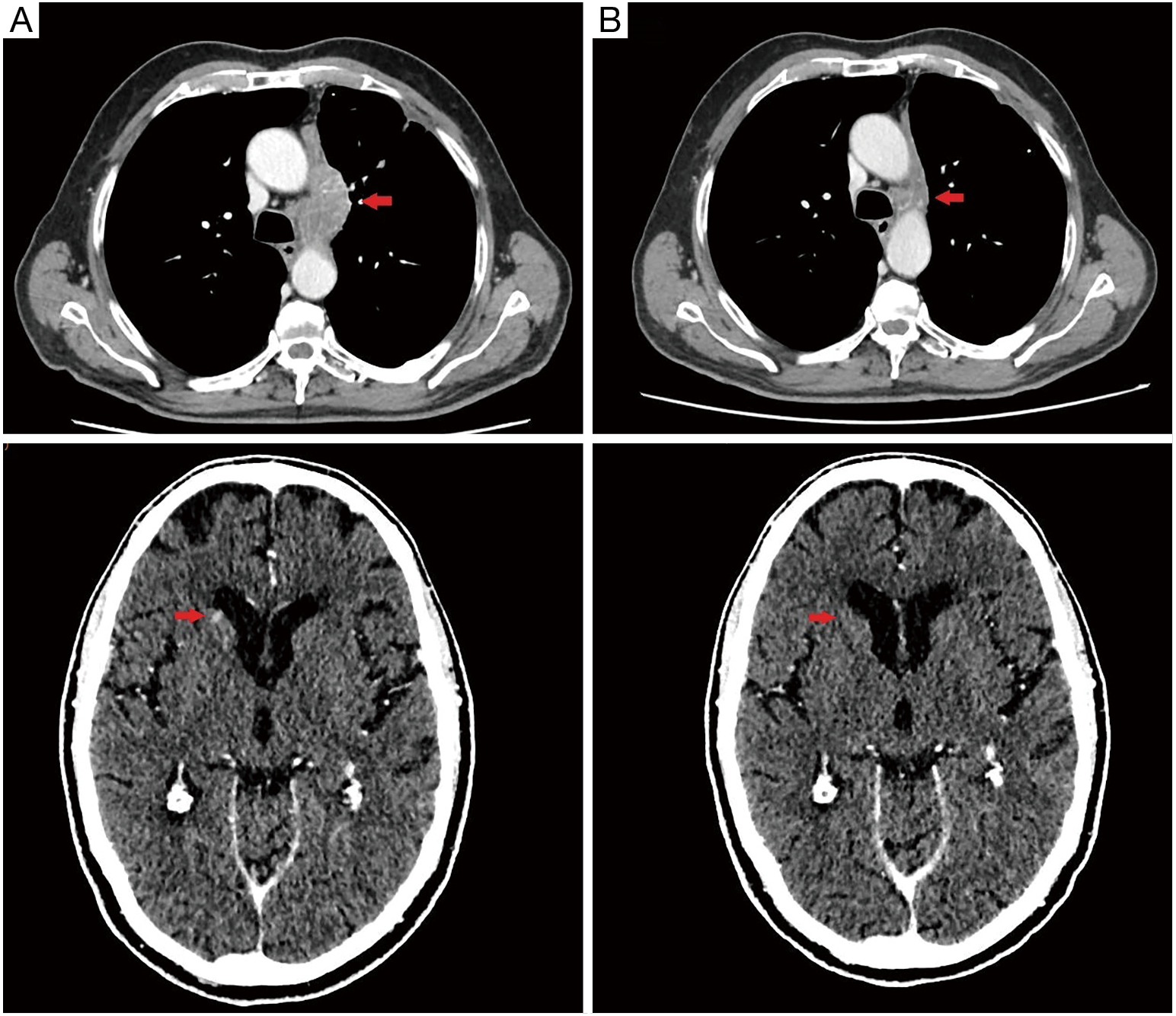 Figure 2 CT-scan before (A) and after (B) first three cycles of CAPTEM in patient 1. The red arrows indicate the lymph nodal and the brain metastases.

Second patient (patient 2) after the finding of a supraclavicular lymph node swelling, underwent excisional biopsy in March 2016, which showed histopathological features of small cell neuroendocrine carcinoma of the lung, with strong (≥90%) MGMT immunoreactivity (Figure 1). In June 2016 the CT-scan showed a nodule to lower lobe of the right lung, lymph node metastases (mediastinic, right supraclavicular and right hilar) and bone metastases to the column and the hip. The patient underwent a positron emission tomography (PET) 68Ga-DOTATOC-scan, which confirmed pathologic uptake to known disease sites. He came to our attention at age of 64, with ECOG-PS of 0. From July 4, 2016 to November 18, 2016 six cycles of Cisplatin (75 mg/m2) plus Etoposide (100 mg/m2) on days 1–3 every 3 weeks, were administered; in association with intramuscular octreotide long-acting 30 mg (Sandostatina LAR® Novartis Europharm Limited, Camberley, United Kingdom) and zoledronic acid 4 mg. Partial response was observed after 3 cycles, but in December 2016 the CT-scan showed progressive disease to the lung. From December 29, 2016 to May 10, 2017 the patient underwent second line chemotherapy with topotecan (2 mg/m2, weekly) with progressive disease to the lungs after 3 cycles. From April 10, 2014 to July 3, 2017 three cycles of third line treatment with CAPTEM regimen was administered, without significant toxicities, but with progressive disease to the lungs. The patient died in August 2017, due to due to respiratory failure.

This report, although don’t identify new decision-making paradigms, offer an opportunity to reflect on therapeutic strategies for second line treatment of ed-SCLC patients. CAPTEM treatment was well tolerated in both patients, but clinical outcomes were diametrically opposed, just like MGMT protein expression in their tumor specimens, suggesting its possible predictive role in patients’ selection. With this mind, patients with weak reaction (<50% of tumor cells stained) could be good candidates for CAPTEM regimen treatment, contrary to whom with strong reaction (≥50% of tumor cells stained). Regarding MGMT assessment, immunohistochemistry staining may represent an appropriate technique, not only because it can be easily done even on archival paraffin-embedded tissue. The relationship between MGMT promoter hypermethylation and protein expression was investigated, without unique conclusions (24,25); furthermore promoter methylation is not the only factor involved in regulation of MGMT function (25-27). Enthusiasm generated by response of the first patient, must reckon with the progression free survival (PFS); even if 6 months could be considered a good outcome in second line treatment of ed-SCLC patients, the subsequent rapid progression was certainly frustrating.

It has long been known that the immune infiltrate might play a role in the evolution of disease in ed-SCLC patients, with particular regard to prognosis. Some studies showed that high level tumor-associated CD45+ (28), CD8+, macrophages (29), CD4+ (30) correlates with increased overall survival (OS) and that high levels of regulatory T cells (Tregs) correlates with decreased OS (31). In the same time we know that SCLC is characterized by one of the highest tumor mutation burden (TMB) among human cancers (32). Therefore we are allowed to think that there is a suppressed immune response against SCLC, which could be pharmacologically awaked (33).

While anti CTLA4 agents (Cytotoxic T-Lymphocyte Antigen 4), such as ipilimumab, did not showed additional benefit when added to a backbone of chemotherapy (34), more expectation have been invested on anti PD1/PD-L1 agents (programmed death-ligand 1), even considering that their development in SCLC, is proving harder than what observed with non-small cell lung cancer (NSCLC). In the SCLC expansion cohort of the phase Ib study of Pembrolizumab Keynote 028, just 31.7% of tested patients have an immunohistochemistry reactivity for PD-L1 ≥1%, with only 24 patients treated (35). Maintenance strategies are also under investigation with mixed results; a phase 2 study of maintenance pembrolizumab after induction chemotherapy did not show improvement in median PFS, even suggesting a benefit in immune-related median PFS and median OS. Notably in this population just 2.8% of tested patients were PD-L1 positive with ≥1% reactivity (36). Combination regimens of immune checkpoint inhibitors seems to be the most promising treatment options in second line/maintenance setting of ed-SCLC patients (37). A recent early report of the SCLC randomized expansion cohort from CheckMate 032 Trial, which evaluate multiple regimens of nivolumab plus ipilimumab in solid tumors, reported promising result. Two subsequent cohort (randomized and non-randomized) of patients received nivolumab monotherapy or induction combination of nivolumab plus ipilimumab, followed by nivolumab alone, in advanced line setting of therapy. ORR with the combination regimen in the non-randomized cohort were more than 20% both for platinum sensitive and refractory patients, with a median OS of 7.8 months (38).

As metronomic chemotherapy functions include activation of immunity (39), combination regimens of low doses capecitabine/temozolomide with immune checkpoint inhibitors, could represent a future perspective for developing clinical trials in second line setting of extensive stage SCLC patients. An exploratory validation of TMB and expression of MGMT as predictive biomarkers could be included in these prospective studies.

Conflicts of Interest: Dr. Alessio Cortellini received honoraria as speaker at a scientific event from Boehringer-Ingelheim; the other authors have no conflicts of interest to declare.