Since the increasing use of multi-slice spiral computed tomography (CT), synchronous multiple primary lung cancers (SMPLC) have become an increasingly recognized phenomenon, with an incidence rate ranging from 0.2% to 20% (1). However, difficulties in proceeding with diagnosis and treatment efforts in patients with SMPLC can lead clinicians to a clinical dilemma. An aggressive surgical approach can yield sufficient specimens for pathologic diagnosis (2,3). Furthermore, segmentectomy and subsegmentectomy may be selected preferentially in the diagnosis and treatment of peripheral pulmonary nodules. These procedures have the advantage of preserving postoperative pulmonary function (4). The uniportal video-assisted thoracic surgery (VATS) is attempted as a less invasive, but sophisticated, we included it into the management protocol of presumptive SMPLC (5,6). We present our surgical experience using segmentectomy and subsegmentectomy to treat SMPLC via uniportal VATS.

A 53 years old woman was admitted with two lesions having ground-glass opacity (GGO) that were found during an incidental CT screening 3 months prior to presentation. The additional CT screening following admission indicated that the lesions did not significantly change in appearance: a 9-mm GGO nodule at the apical segment (S1a) of the right upper lobe, and a 5-mm one at the anterior segment (S8) of the right lower lobe were each observed (Figure 1A,B). The patient was presumptively diagnosed with SMPLC. Her preoperative staging work-up indicated no signs of lymphadenopathy or distal metastasis. Additionally, forced expiratory volume (FEV) 1 and FEV1/forced vital capacity (percentage predicted) in her preoperative pulmonary function tests were 1.7 L and 0.82, respectively. The patient denied any other medical history. Thus, in light of no surgical contraindication being present, a uniportal VATS for SMPLC procedure was planned following obtainment of written informed consent. 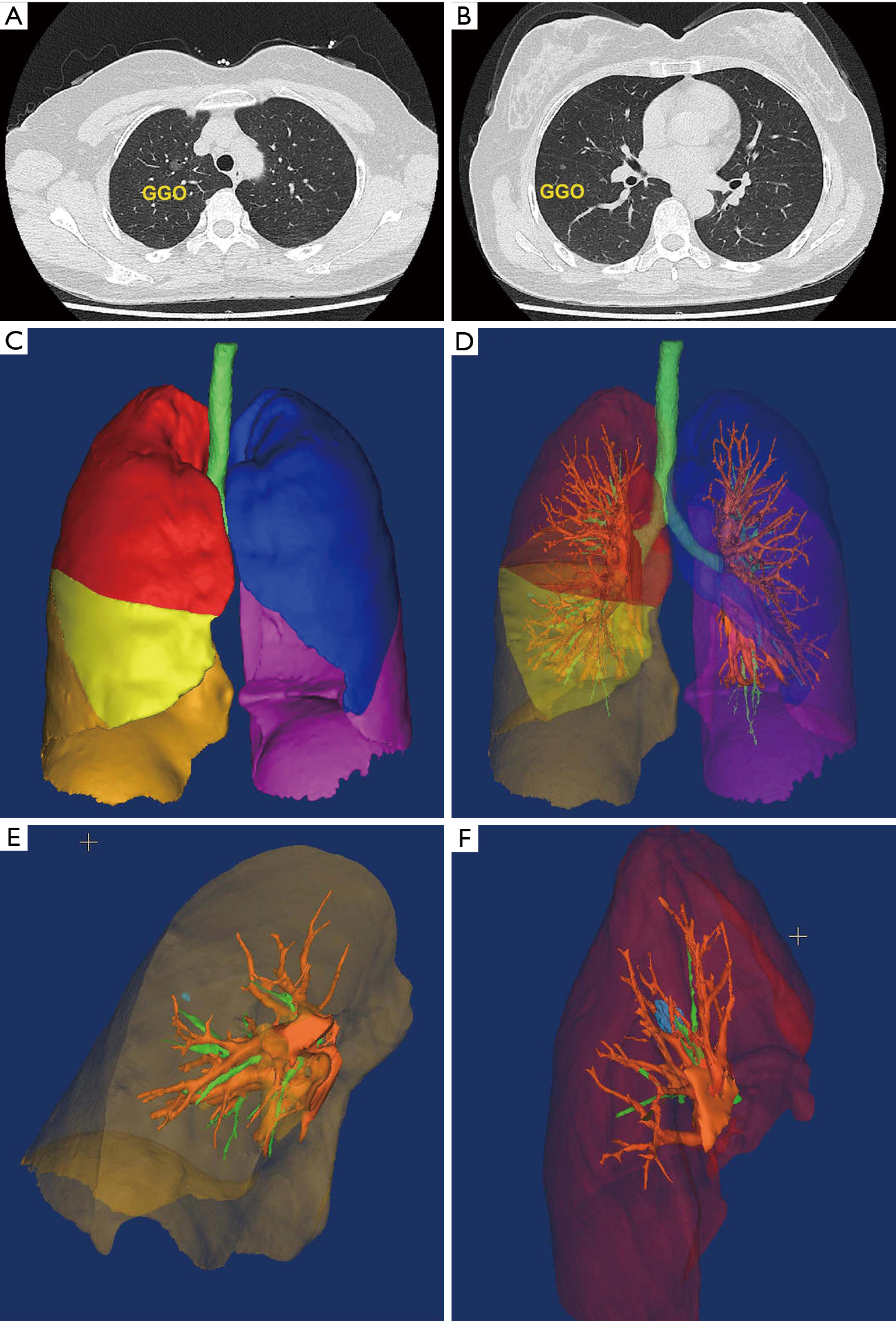 The lesion locations, anatomy of the branches, and the targeted vessels were identified via three-dimensional (3D) pulmonary models using Mimics 20.0 (Materialise, Leuven, Belgium) (Figure 1C,D,E,F). Then, we proceeded with the uniportal VATS S8 segmentectomy and S1a subsegmentectomy. With assistance from 3D navigation, we ensured that the lesions could be resected at least 2 cm away from the tumor during segmentectomy and subsegmentectomy. The anesthesia, positioning, and port placement were as described previously (7). The surgical procedure is described in Figure 2. 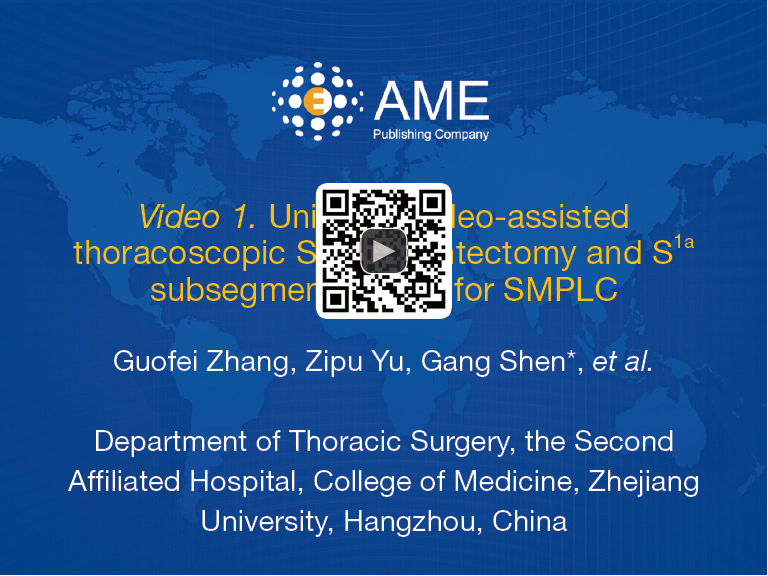 The segmental arteries (A7−10) and bronchi (B7−10) were identified with the help of preoperative 3D CT images. Notably, S8-segmentectomy does not require exposure of the inferior pulmonary vein. After dividing the lobar fissure, A6, A7, A8, and A9+10 became exposed (Figure 3A). Precise identification requires that A8 to be sufficiently exposed in the peripheral direction. Following its revelation, the A8 was ligated and transected. The anterior segmental bronchus (B8) runs behind the A8. After the 13th group lymph nodes were cleared, the B8 became apparent. Then the B8 was carefully encircled with thread to avoid damage to the V8 running behind it, and then transected via a stapler (Covidien Inc., Mansfield, MA, USA) (Figure 3B). After that, the mode of thoracoscopic images was switched to infrared light; we then injected indocyanine green (ICG) (2.5 mg/mL, 2.5 mg dissolved in 1 mL saline) rapidly into a peripheral vein and observed the lung using an infrared thoracoscope. The ICG distributed area was displayed in green on the infrared monitor, but the ICG defect area was displayed in normal color. The intersegmental border was visualized with or without fluorescence (Figure 3C). At this point, we marked the transitional zone on the visceral pleura using electrocautery and divided the lung parenchyma using staplers on the basis of this marking. 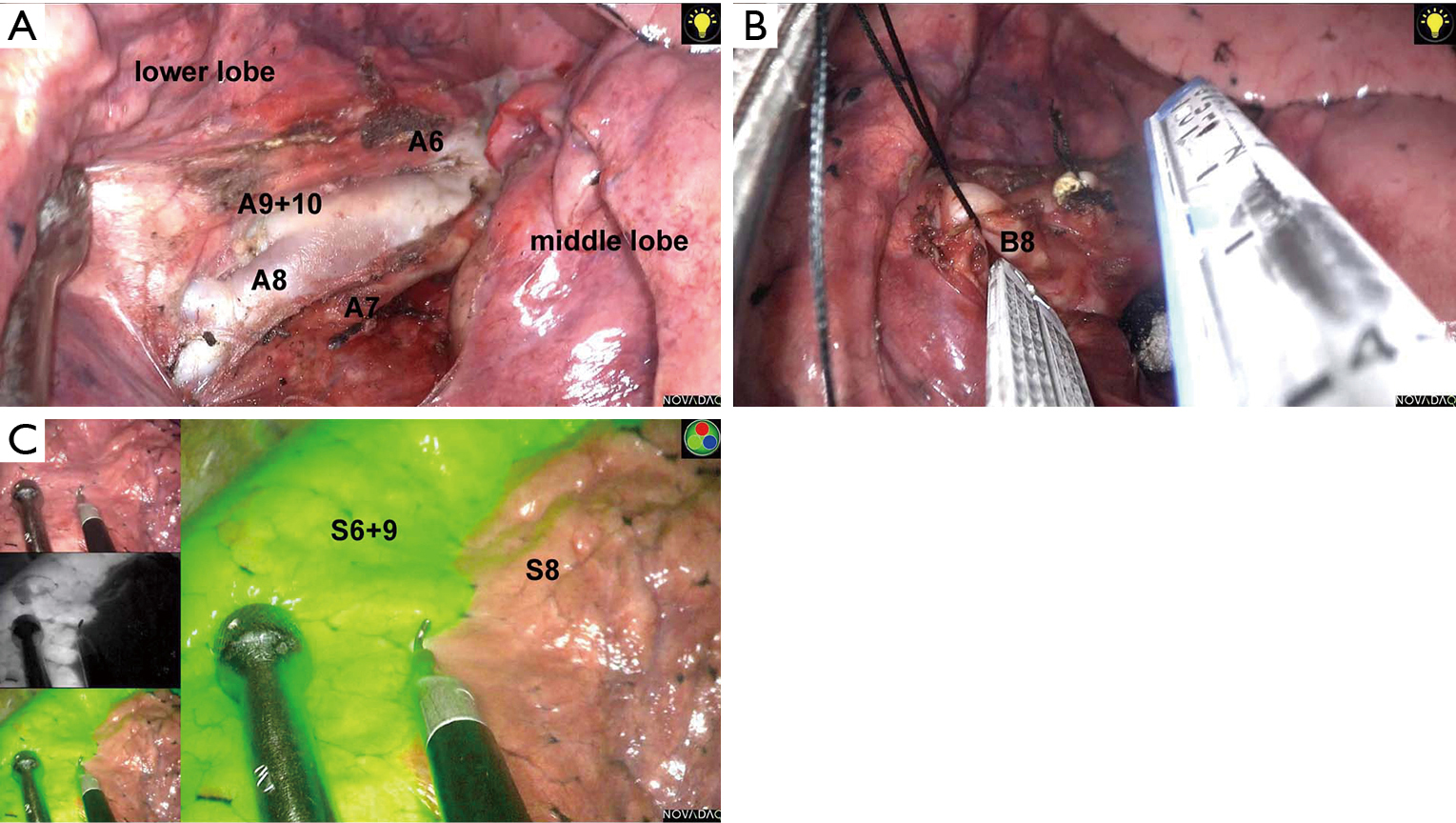 Figure 3 The uniportal VATS right S8 segmentectomy procedures. (A) Exposure of the arteries of the right lower lobe; (B) transection of the B8 by stapler; (C) the reserved segment of the right lung turned green after the injection of ICG. Note that the target segment (S8) remains normally colored. VATS, video-assisted thoracic surgery; ICG, indocyanine green.

As described in the previous section, the segmental arteries (A1−3) and bronchi (B1−3) were identified under 3D CT images. As A2a branches are a recurrent A2 (Rec.A2) from the truncus superior artery, the artery was dissected distally to expose Rec.A2 and A1a (Figure 4A). Then, the A1a was ligated and transected. After that, the apical subsegmental bronchus (B2a) was freed and subsequently transected using a stapler (Figure 4B). The intersegmental border was marked on the visceral pleura using electrocautery under infrared light following an injection of ICG (Figure 4C). The S1a was also divided using the stapler. 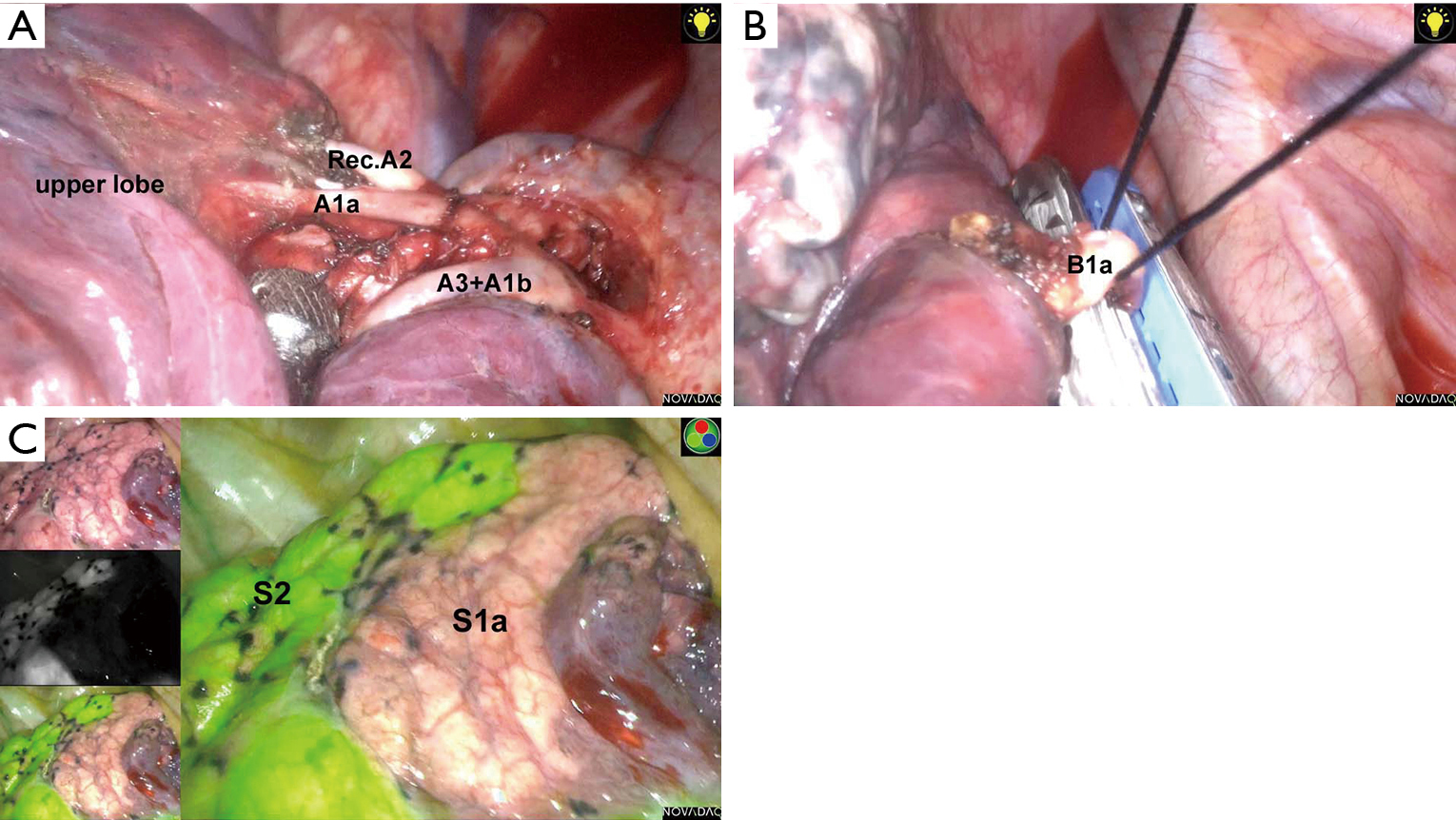 Figure 4 The uniportal VATS right S1a subsegmentectomy procedures. (A) Exposure of the truncus superior artery; (B) transection of the B1a by stapler; (C) the intersegmental border was identified between the target segment (S1a) and reserved segment after the injection of ICG. VATS, video-assisted thoracic surgery; ICG, indocyanine green.

The intraoperative frozen sections confirmed a microinvasive adenocarcinoma in the S8 and adenocarcinoma in situ in the S1a. Mediastinal lymphadenectomy was then performed. After lifting the azygos vein using a hook, but without opening the mediastinal pleura, just like “chunnel”, the paratracheal lymph nodes (the second and fourth groups) were dissected en bloc (Figure 5A). After that, the right subcarinal lymph node (the seventh group) was dissected en bloc (Figure 5B). Finally, a single 24 F chest tube and a 14 G fine tube were placed in the thoracic cavity prior to the closure of the port site as described previously (Figure 6A) (7).

Figure 5 Mediastinal lymph node dissection. (A) The second and fourth group; (B) the seventh group.

Figure 6 The incision and postoperative chest radiography. (A) Incision on the right side. Two chest tubes (24 F and 14 G) were placed; (B) plain radiography of the chest showed lung re-expansion.

The total operative time was 145 min. The amount of perioperative blood loss was 60 cc. As the chest radiograph showed lung re-expansion on the first day after surgery (Figure 6B). The patient was discharged fifth days after the operation with no complication. The pathological examination documented two primary lung cancers of the patient: right upper lobe, adenocarcinoma in situ, TisN0M0; and right lower lobe, microinvasive adenocarcinomas, T1a(mi)N0M0.

With the increasing incidence of SMPLC, difficulties in diagnosis and decision-making for the treatment of affected patients usually raises a clinical dilemma for clinicians (9). The preoperative diagnosis is often difficult, due to hardships in obtaining sufficient specimens for histological examination, whether through bronchoscopy or percutaneous puncture, especially in the case of small peripheral lesions. To simplify the diagnosis and treatment course, the less invasive technique of VATS for the management of SMPLC was selected preferentially to achieve a mini-invasive diagnosis and synchronous treatment (4). Compared with lobectomy, segmentectomy is associated with equivalent oncologic outcomes in stage IA (T1aN0M0) NSCLC (10,11). In the current patient, the two lesions were resected via segmentectomy and subsegmentectomy, respectively. This treatment strategy remains a good alternative when the patient is unable to tolerate a more extensive resection because of compromised pulmonary function.

In our experience, based on the evolution from lobectomy to segmentectomy using the single-port technique, we have often applied segmentectomy or subsegmentectomy, which is a good alternative, mostly for patients with SMPLC. Preoperative simulation on 3D images could simplify the procedures of segmentectomy and subsegmentectomy, and ultimately achieve a completely anatomical segmentectomy. In addition, the ICG method described herein is a fast, simple, and safe procedure that is able to detect the intersegmental plane from the physiology, between the target and reserved segments.

Funding: This work was supported by grants from the Science and Technology Department of Zhejiang Province (2013c03044-7).

Informed Consent: Informed consent was obtained from the patient.