Constrictive pericarditis (CP) is characterized by pericardia constraint due to inflammation and/or fibrosis which leads to impaired diastolic function. Pericardiectomy is the definitive treatment for chronic CP patients by relieving pericardial restraint, and is recommended once patients are diagnosed (1).

However, 1.2% to 6% patients died within 30 days after surgery, and the most common cause of perioperative death was congestive heart failure (2-5). The benefit and risk of pericardiectomy depends not only on pericardial and diastolic involvement, but also on myocardial dysfunction of the heart. Concomitant systolic myocardial dysfunction caused by pathological changes such as myocardial atrophy, fibrosis, and insufficient perfusion may impede cardiac recovery in patients with constrictive pericardium (6-9). Echocardiography is a reliable noninvasive method to assess cardiac function before surgery. A previous report suggested that reduced left ventricular ejection fraction (LVEF) was a predictor for perioperative mortality (10). However, preoperative LVEF of most CP patients is within the normal range (11,12). Compared to patients who survived during the follow-up, patients who died during follow-up did not have a lowered preoperative LVEF (2), suggesting that LVEF itself plays a limited role in identifying early cardiac dysfunction and in predicting adverse outcome in CP patients.

Two-dimensional speckle tracking echocardiography (2DSTE) is an angle-independent and accurate method to better characterize subtle changes in left ventricular (LV) performance and mechanics (13). The purpose of this study was to use 2DSTE measurements to determine whether LV strain could identify impaired cardiac mechanics and relate to early postoperative cardiac adverse outcome in CP patients with preserved LVEF (LVpEF).

Consecutive forty-five patients with CP were admitted and underwent total pericardiectomy after assessed by echocardiography via GE equipment (Vivid7, GE Healthcare, Waukesha, WI, USA) in Peking Union Medical College Hospital from 2015 to 2017. One patient was excluded due to malignancies involving the pericardium. Forty-four patients were identified. Forty-four age- and sex-matched controls were selected from our healthy volunteer database. The study was approved by the Peking Union Medical College Hospital’s Institutional Review Board (ID: S-K494).

Echocardiography was performed using a standard ultrasound system (Vivid7, GE Healthcare, Waukesha, WI, USA). Two-dimensional gray-scale images were acquired in three long-axis views of the apical four-, two-, and three-chambers, and three short-axis views of the left ventricle at the levels of mitral valve, papillary muscle and apex. Global peak longitudinal strain (GLS), global circumferential strain (GCS), and global radial strain (GRS) were measured using the EchoPAC analytics software Version 113 (GE Healthcare, Waukesha, WI, USA). To assess the direct and indirect impact of the constrictive pericardium on cardiac mechanics, the left ventricle was divided into non-septal and septal sections. In particular, the system-generated region of interest in the mitral valve short-axis view was automatically divided into six segments by EchoPAC’s 2D strain analyzing system. Septal circumferential strain (CS) or radial strain (RS) was calculated by averaging segmental strain of the anterior and posterior ventricular septum. Free wall CS or RS was calculated by averaging the four non-septal segments of strain. Similarly, septal longitudinal strain (LS) was calculated by averaging six septal segments (system generated by EchoPAC) and free wall LS was determined by averaging the twelve non-septal segments in the three long-axis views (Figure 1). Epicardial CS and LS were generated from free wall CS and LS respectively. The endocardial boundary determination and strain measurement were performed by a single operator who was blinded to clinical information. To assess reliabilities of strain, 30 subjects (15 patients and 15 controls) were randomly selected and analyzed by two readers who were allowed to select the best cardiac cycle and blinded to previous measurements. 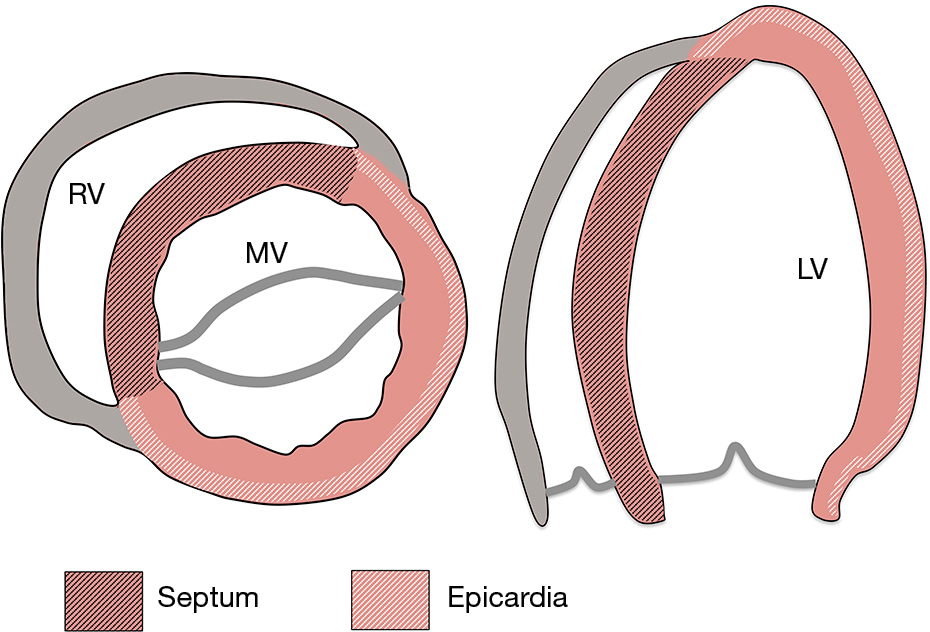 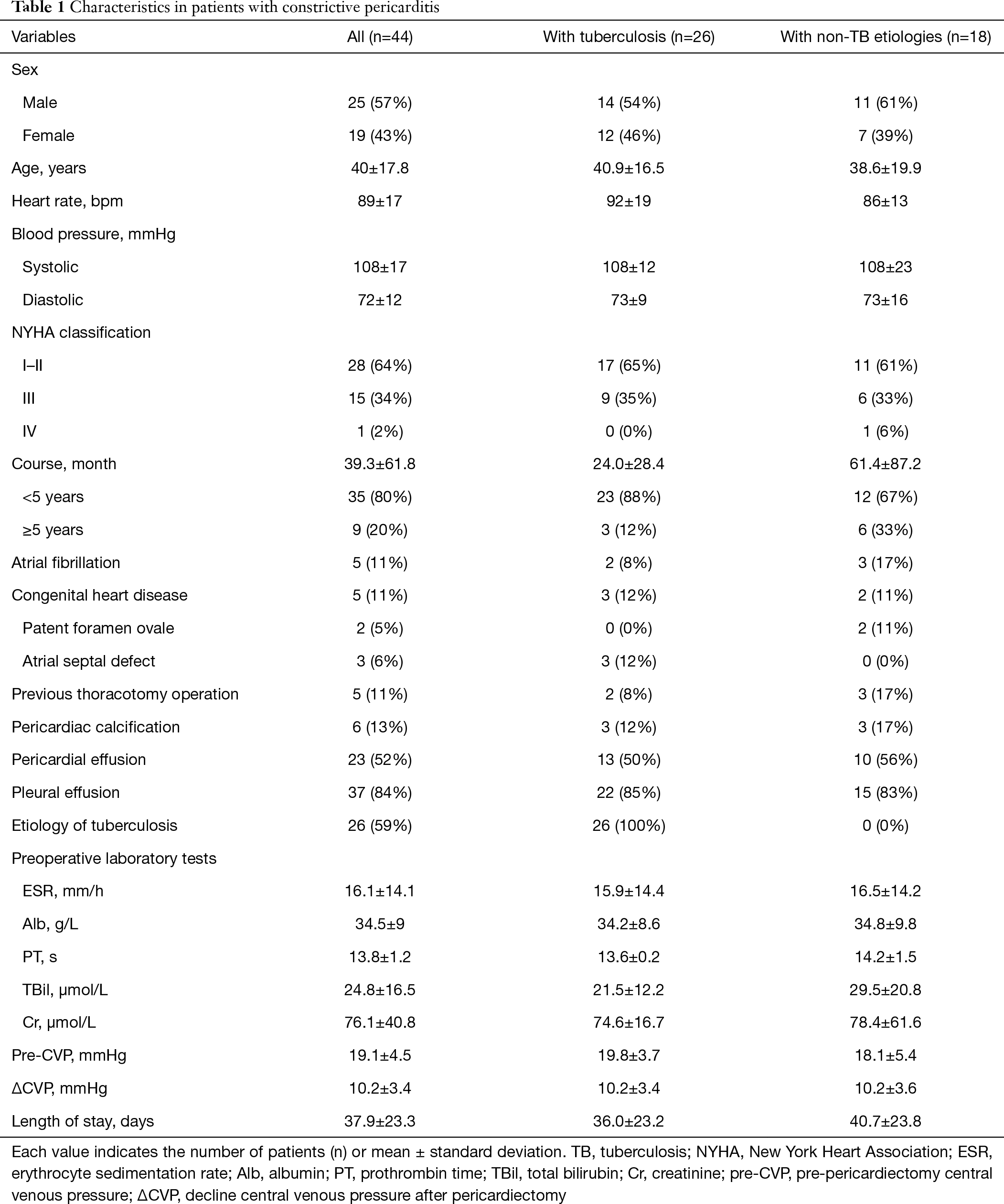 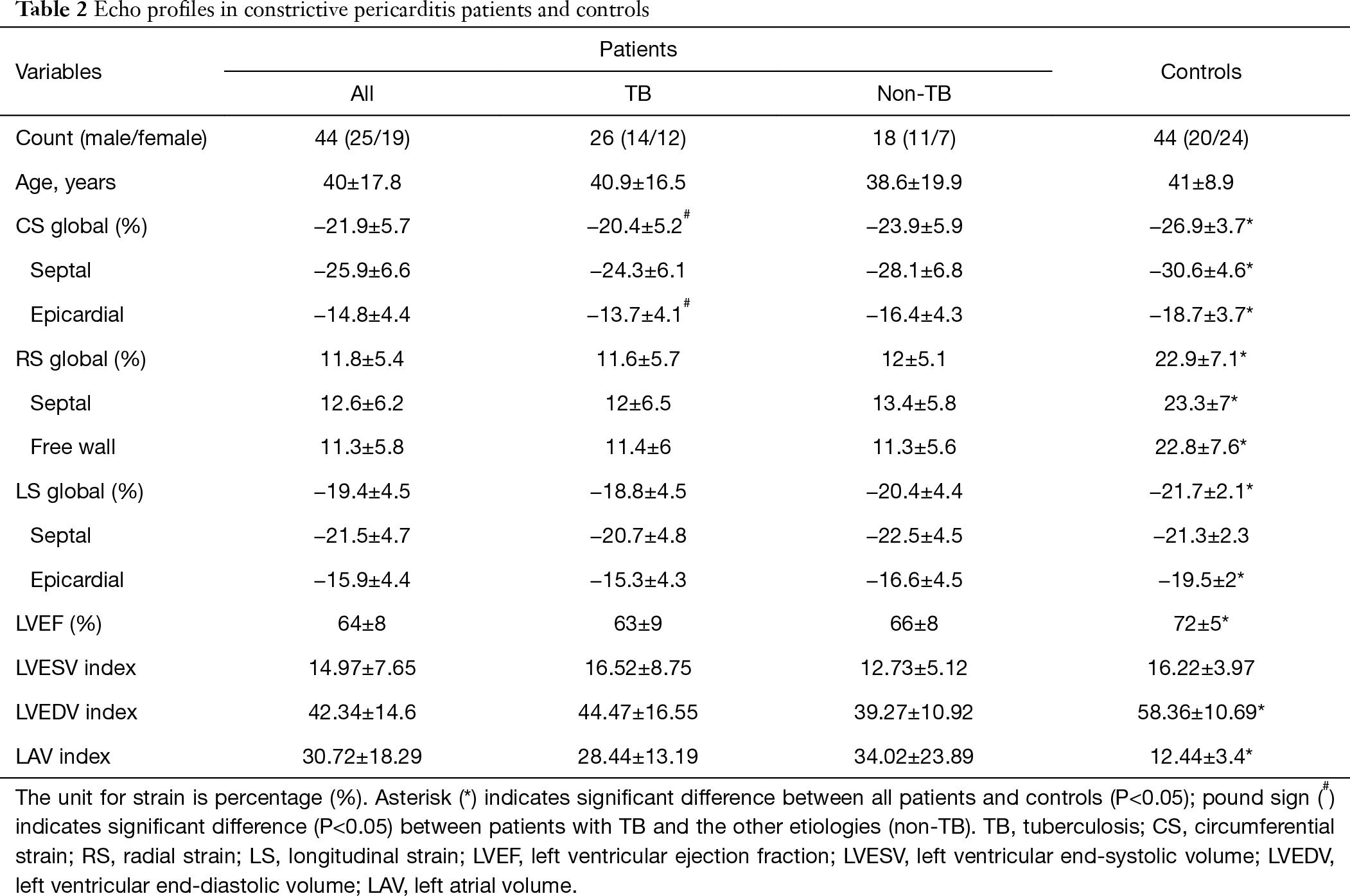 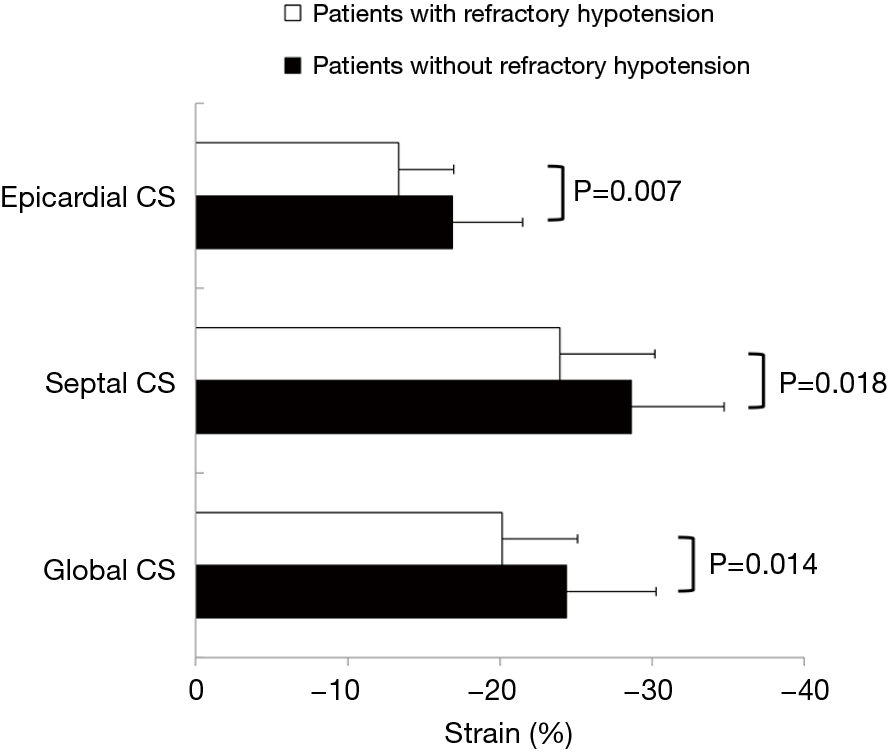 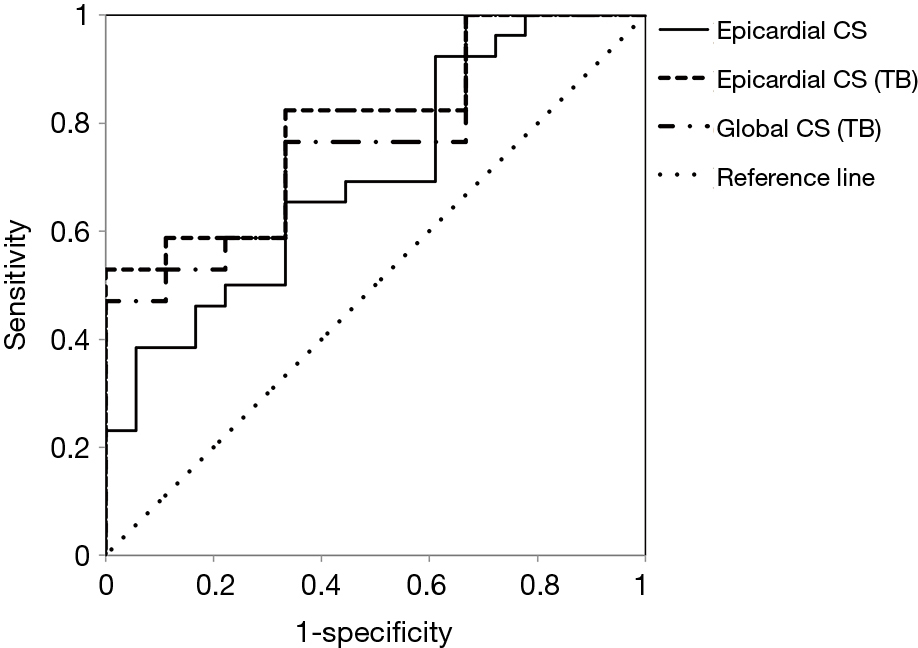 Figure 3 Receiver operating characteristic curves of circumferential strain (CS) to distinguish constrictive pericarditis patients with acute postoperative refractory hypotension from those without. The results showed the area under the curve (AUC) of free wall epicardial CS was 0.70 (P=0.02). Additionally in tuberculous patients, the AUC of epicardial CS was 0.80 (P=0.01), and GCS was 0.77 (P=0.03). CS, circumferential strain; TB, tuberculosis.

In this study, we evaluated relationship between preoperative strain and early prognosis of CP patients following pericardiectomy. We found that CS, RS and LS of CP patients with LVpEF were markedly reduced than healthy controls. Compared to patients with the other etiologies, patients due to TB had lower CS value. We identified strain as an important parameter correlating with postoperative refractory hypotension, specifically lower epicardial CS was an independent risk factor for early postoperative complication.

It was reported that 30-day perioperative mortality was 1.2–6% among CP patients who underwent pericardiectomy (2,3), and it cannot be ignored considering the great beneficial role of surgery that 5-year postoperative survival among those patients was 78–95% (2,3,14). Low cardiac output syndrome was the most common complication during the early postoperative phase, and heart failure accounts for nearly half of all deaths (4,5). In addition to incomplete epicardial resection, pathological changes to the myocardium can lead to post-pericardiectomy complications (15). Pathological changes to the pericardium and myocardium help to elucidate CP disease progression. Gradual pericardial restriction leads to disuse atrophy (6,7) while direct penetration of pathogens or concomitant pathologic processes to both the myocardium and pericardium can cause myocardial fibrosis (8,9). Therefore, the extent of preoperative myocardial involvement may affect the effectiveness of pericardiectomy and contribute to severe postoperative complications and cardiac dysfunction even death. Busch and colleagues (10) found reduced LVEF (between 35% and 55%) was an independent predictor for perioperative mortality, and preserved LVEF (>56%) was protective in CP patients. However, according to our study, early postoperative refractory hypotension occurred in a high proportion of CP patients with LVpEF (59%), which may due to long disease course and TB as the primary etiology (59%) of the patients, because tuberculosis related CP was associated with high mortality and the incidence of severe complications (16). In our study, we found TB patients had lower CS absolute value compared to non-TB patients, indicating more severe myocardial involvement. However, occurrence of refractory hypotension in tuberculous CP patients was not significantly higher than non-TB patients in our study (TB vs. non-TB, 65.4% vs. 50%, P=0.361), which may result from the small sample size.

Parameters are needed to early detect and evaluate myocardial dysfunction of CP patients in clinical decision-making, despite some clinical and laboratory indicators currently being used as predictors of poor overall survival (1). Ha et al. used catheterization to identify hemodynamic parameters to assess the risk of cardiac dysfunction and mortality in CP patients (17). They found more frequent administration of postoperative inotropic support and higher postoperative mortality in patients with both abnormal contractility and abnormal relaxation. But cardiac catheterization was not often used due to its invasiveness and associated costs. Echocardiography is widely applied as a promising technique to provide potential valuable parameters to predict adverse outcome. Kang and colleagues (2) found that small LV end-systolic dimension index was a significant predictor of mortality after pericardiectomy. Additionally, LVEF was reported to be a risk factor of early (30 days) mortality (10). However, our study did not show correlations between conventional echo methods and postoperative refractory hypotension. This suggested variables based on geometric assumptions may not be always applicable to a distorted heart from CP because of the anomalous tethering by inflamed pericardium.

There are multiple reports that 2DSTE imaging is a reliable method to determine ventricular myocardial function (18,19). Decreased global CS and RS in CP patients compared with healthy controls was reported (20-22), while LS value reduced less (21). Shell-like, fibrotic and even calcified pericardium tethering in CP patients may predominantly affect subepicardial function thus impact LV circumferential mechanics rather than radial mechanics (23). Impaired radial and LS is associated with transmural myocardial injury (23). In our study, CP patients had lower levels of CS, RS and LS compared with healthy controls, indicating our patients were relatively severe. Additionally, patients with tuberculous had worse CS in epicardia reflecting outside-in involvement and possible concomitant myocarditis. Considering those patients with LVpEF, our results supported the consensus that 2DSTE imaging could provide more comprehensive information about heart mechanics so that it may be able to detect subclinical myocardial dysfunction at an earlier stage as compared with conventional imaging modalities (24-26).

An improvement in LV CS and LS after surgery suggested the cardiac mechanics (27,28). The relation of LV mechanics using 2DSTE imaging to postoperative clinical status was reported by Li et al. (29), showing that an increase of global CS between post- and pre-pericardiectomy was associated with improved heart function. Under the circumstances that pericardiectomy is the only curative treatment for patients with CP, it highlights the potential value of strain- a parameter to recognize possible reversible deformation of the myocardium and a predictive parameter for early myocardial dysfunction in CP patients. In our study, we found that CP patients with LVpEF had reduced strain value, which was associated with acute postoperative refractory hypotension.

Our results showed that compared to septal strain, epicardial strain declined more. Regional peri-myocardial adhesions and tethering may account for the difference between septal and free wall strain. Kusunose and associates (27) found similar results that strain was depressed in the LV anterolateral wall but preserved in the LV septal wall. Our study reported for the first time that regional strain-lower level of epicardial CS was a risk factor for detecting poor postoperative condition of patients with CP. For the tuberculous patients, epicardial CS could also distinguish patients who suffered acute refractory hypotension from those who didn’t. The relationship between epicardial CS and postoperative diuretic treatment suggested that patients with reduced baseline epicardial CS might benefit from more aggressive fluid management.

According to our study, reduced strain could help us evaluate ventricular myocardial contraction and was associated with acute postoperative refractory hypotension in patients with LVpEF, which may give us a new perspective on early identification of high-risk CP patients. A prospective study with a longer term of follow-up is needed in the future.

Our study had a few known limitations. First, the sample size was small due to the selection criteria. We included not only patients with CP who underwent solitary pericardiectomy but also patients requiring concomitant cardiac procedures (n=5, 2 atrioseptopexy, 1 bipolar radiofrequency ablation, 1 mitral valvuloplasty and 1 aortic valve replacement), which may add extra risk to patients who had isolated CP. However we did not find the differences in postoperative condition between patients undergoing concomitant procedures and solitary pericardiectomy. Also other vendors and software were not included for speckle tracking analysis, which may impact the generalizability. Second, we considered acute postoperative refractory hypotension as outcome in this study. This limits the ability to understand long-term cardiac adverse outcome of these patients. In further studies, a longer term of follow-up and analysis of strain will be required to verify the prognostic value of 2DSTE for CP patients.

This study found LV strain was markedly reduced in CP patients with LVpEF, and showed the value of evaluating myocardial function for disease prognosis. A lower preoperative CS values were associated with higher risk of postoperative refractory hypotension. Our results indicated high-risk of patients with LVpEF could be identified by 2DSTE imaging, and more aggressive fluid management may be needed in these patients.