Lung hernia is defined as the protrusion of lung tissue through a bounding structure (1). There are a few reports of lung herniation occurring after a lung operation, but such cases rarely require emergency surgery (2). We here report the case of a patient who developed lung herniation after wedge resection, and required emergency surgery due to post-operative respiratory difficulty. In this patient, an aerial fistula developed when portions of the lung escaped the thoracic cavity after rib fracture, making air drainage via a thoracic drain ineffective, and causing the sudden development of subcutaneous emphysema, which required emergency surgery.

The patient was a 69-year-old man with chronic obstructive pulmonary disease. We performed wedge resection of the left upper lung lobe for a nodule suspected of being lung cancer. The patient had impaired pulmonary function, with VC 3.41 L, %VC 101.2%, FEV 1.0, 1.06 L and %FEV 1.0%, 34.19% and DLCO 8.24 (mL/min/mmHg), %DLCO 54.2% on spirometry. Fluorodeoxyglucose-positron emission tomography (FDG-PET) imaging showed FDG accumulation in the tumor (SUVmax 14.5); the tumor size was 2.0 cm, with no lymph node metastasis noted. The tumor was present at the periphery of the lung, and we thought that we could not diagnose the tumor by bronchoscopy because of tumor size and location. We therefore considered that a wedge resection was the best option for the patient. We therefore performed wedge resection of the left upper lobe of lung as a limited operation.

The surgery was performed using video-assisted thoracotomy via a skin-incision of approximately 10 cm in the fourth intercostal space, in order to be able to palpate the tumor and to obtain a safe resection margin. A frozen section of the removed lung nodule revealed non-small cell lung cancer. The patient’s postoperative course was good, and his thoracic drain, which showed no air leakage, was removed on the third postoperative day. On the fourth postoperative day, however, the patient developed breathing difficulty, and subcutaneous emphysema developed with a severe cough. Clinically, we considered that a postoperative pulmonary fistula had developed, and therefore inserted a thoracic cavity drain, but the deaeration from the drain was poor. His respiratory condition worsened, and his subcutaneous emphysema was exacerbated. We ultimately diagnosed him with incarceration herniation of the lung, from the thoracotomy wound in the intercostal space, based on computed tomography (CT) (Figure 1A,B). Air leakage from the lung protruding from the thoracic cavity continued, causing air to flow into the subcutaneous space. Consequently, the chest wall was compressed, and the motion of the thorax was restricted. In addition, fracture of a lower rib at the level of the periostal stitches was noted on three-dimensional CT (3DCT) (Figure 1C). We therefore performed emergency surgery. 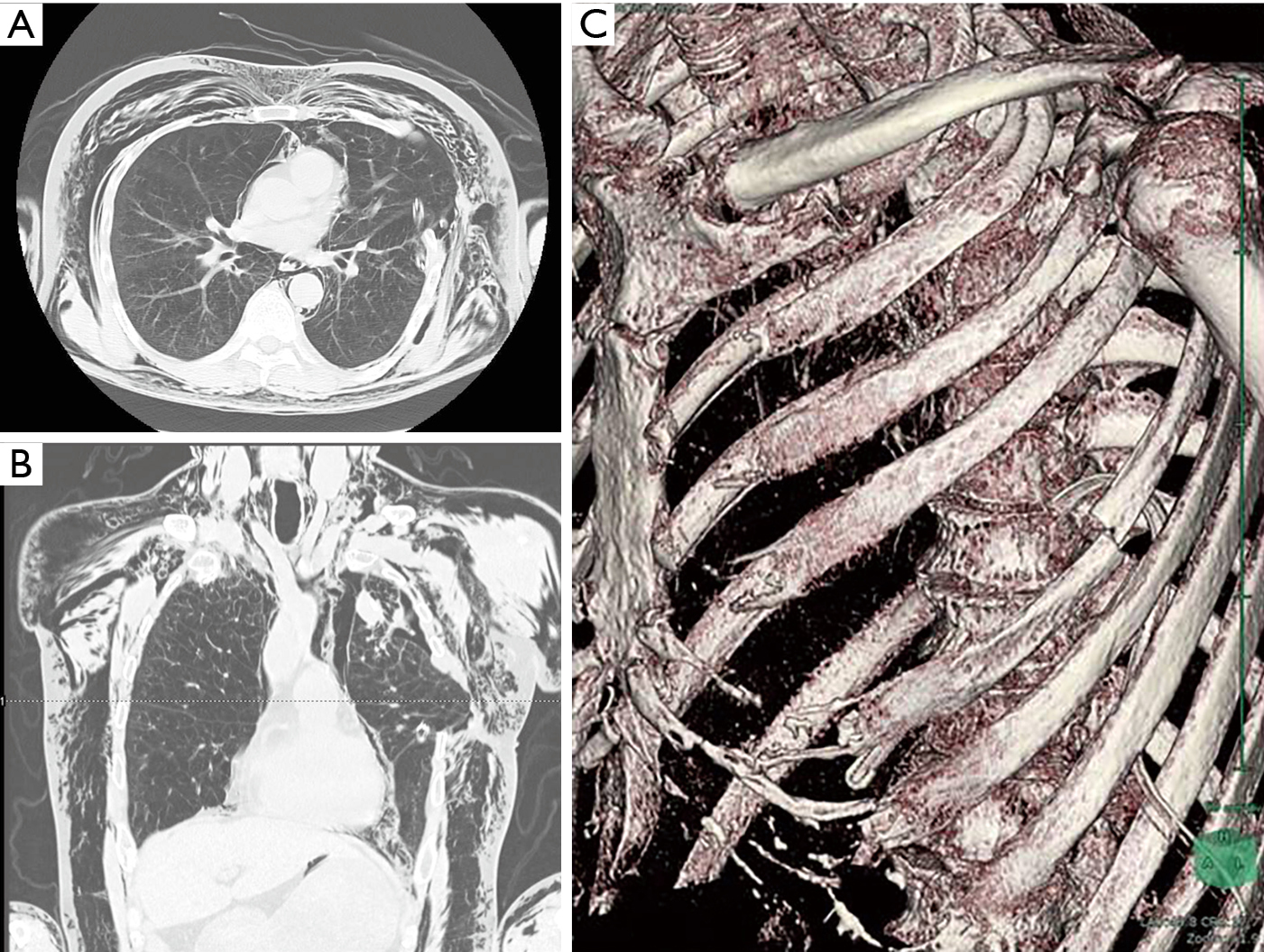 Figure 1 Chest CT findings. (A) Left lung hernia and massive subcutaneous emphysema were detected on computed tomography (CT); (B) left lung hernia was detected on CT, and the structure was depicted more clearly by coronal section CT; (C) the fracture of the fifth rib was clearly visible on 3DCT.

The surgery was carried out via the same skin incision as previously. Intra-operatively, we found that the lung had already returned to the thoracic cavity, and we observed fracture of the fifth rib. The staple line of the lung had not ruptured, but the visceral pleura of the lung was injured, which we repaired by suturing. It is likely that the lung made contact with the stump of the fractured rib, causing pleural injury. The fractured part of the stump was trimmed, mesh was laid down outside the fourth intercostal bony thorax, and the hernia orifice was closed. The postoperative course was good, and the patient left the hospital at 7 days after reoperation.

Whether congenital or acquired, lung hernia is rare. Consequently, there are few guidelines for its effective management, as fewer than 300 cases of lung hernia have been described in the literature to date (1,3). The major causes of acquired hernia are trauma to the chest and thoracotomy incision, but reports of lung herniation after video-assisted thoracic surgery (VATS) operation are rare (4,5). In the present case, lung herniation occurred after a sudden cough. Spontaneous lung hernias usually develop as a consequence of a sudden increase in intrathoracic pressure, such as during intense coughing, or sneezing, under conditions of localized weakness of the thoracic wall, resulting in rib or cartilage fracture (6).

The condition presents with specific clinical findings and can be difficult to diagnose, complicating treatment decisions. In the present case, it is likely that intrathoracic pressure increased due to a cough, which also caused fracture of a rib that was fragile after perioperative thoracotomy. We had confirmed that there was no rib fracture during the first operation. When closing an intercostal space, we usually drill a hole in a lower rib, through which the lower and upper ribs are ligated with thread. We consider that the lower rib had fractured at that point, as the fracture profile matched the hole (Figure 1C).

The lung escaped into the gap, coming into contact with the costal stump, which caused lung injury. Because the damaged lung became incarcerated outside of the thoracic cavity and air began leaking from outside of the thoracic cavity, the patient’s symptoms were not improved by chest drainage alone. We therefore decided to perform emergency surgery.

Surgical decisions are made based on the size of the hernia, the symptoms (pain, dyspnea), the risk of parenchyma incarceration (e.g., difficult hernia reduction or small chest wall defects), and the patient’s comorbid conditions (1,7). In our case, 3DCT was very useful for judging the patient’s clinical condition and diagnosing his condition (6).

In conclusion, we experienced a patient who suffered lung hernia after thoracotomy, due to post-thoracotomy cough-induced rib fracture, and developed massive subcutaneous emphysema. Although this is a rare case, it is necessary to be mindful of this possibility.