Cancerous esophageal stenosis before treatment was significantly correlated to poor prognosis of patients with esophageal cancer: a meta-analysis

The following criteria were used for study inclusion: (I) either randomized controlled trials (RCTs) or observational studies evaluated the impact of cancerous esophageal stenosis before treatment on the survival of esophageal cancer patients; (II) sufficient data could be obtained for 5-year overall survival (OS); (III) the most recent one was chosen if the studies were based on overlapping patients. The exclusion criteria were as follows: (I) paper that was not published in English; (II) case reports, abstracts, conference reports, reviews and experiments; (III) paper without any relevant data that could be extracted for analysis.

Two authors (Han-Yu Deng & Guha Alai) independently extracted data from included studies and compared results. In order to avoid bias, discrepancies were resolved by third author (Jun Luo) adjudication. Data were carefully retrieved from full articles by using a standardized data collection form. The following data were collected from each study: first author, year of publication, number of the patients, age, study design and follow-up as well as the outcome (5-year OS). The Jadad scale (10) was used for the quality assessment of RCTs. The quality assessment and risk-of-bias analysis of observational studies was evaluated by The Newcastle-Ottawa Scale (NOS) as we previously described (11), which consists of three factors: patient selection, comparability of the study groups, and assessment of outcome. A score of 0–9 (allocated as stars) was assigned to each study, and the high-quality study was deﬁned as a study with quality scores≥7 (Table 1). The name of the first author and the year of publication of the article were used for identification. 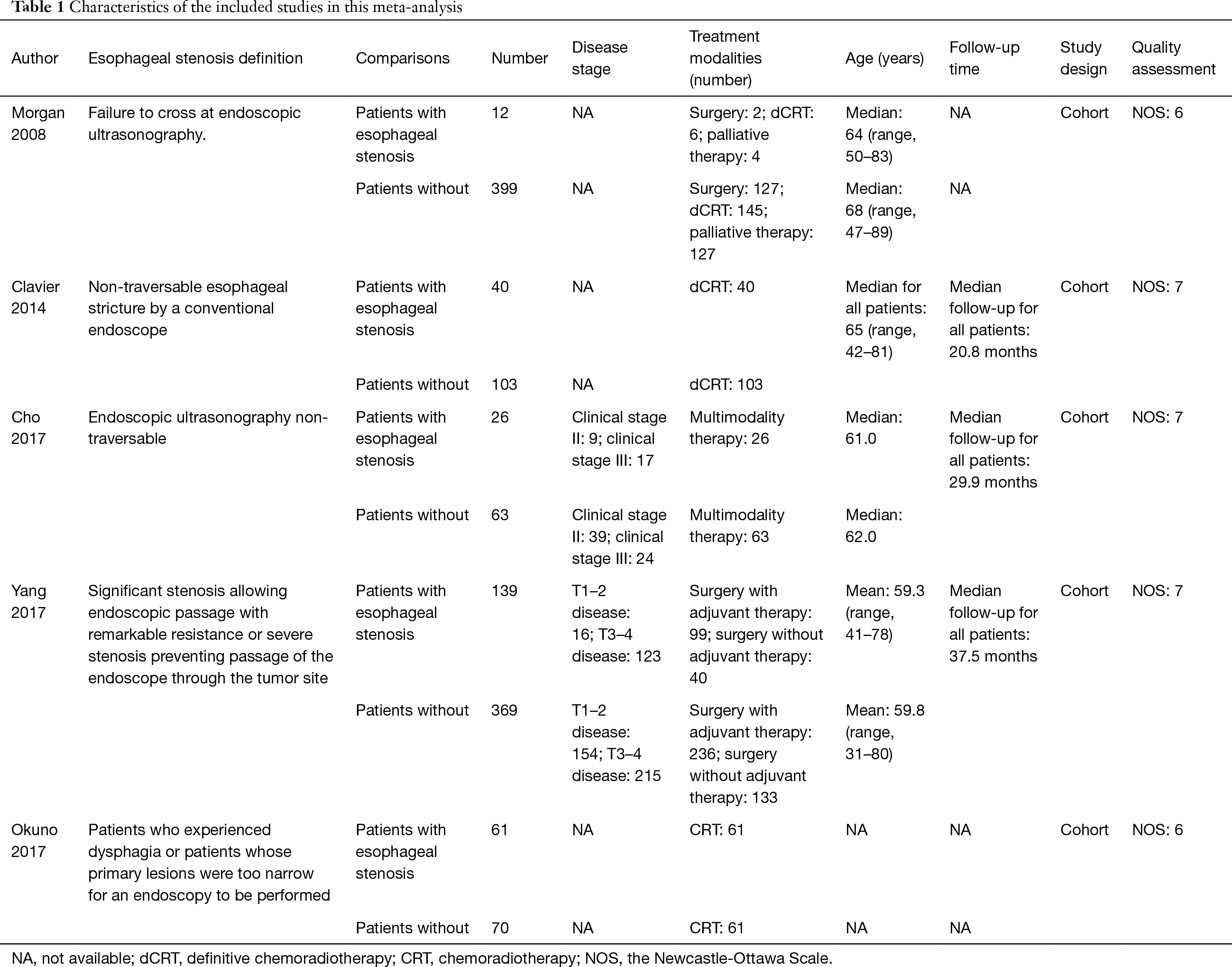 All analyses were performed in accordance to PRISMA guidelines (12) by using the STATA 12.0 package (StataCorp, College Station, TX, USA). Data of 5-year OS rate was extracted directly from text or Kaplan-Meier curve reported in the individual studies and for the comparison, risk ratio (RR) with 95% CI were used. For each study, the between-study heterogeneity was assessed using χ2-based Q statistics and the I2 test. Random effects models would be used if high heterogeneity of the studies (P<0.1 or I2>50%) was observed. Otherwise, fixed effects models were used. Sensitivity analysis was performed by sequential removal of each study. A funnel plot was used to estimate potential publication bias, and asymmetry of the plot was tested by Begg’s test and Egger’s test (13). Statistical significance was set at P<0.05. 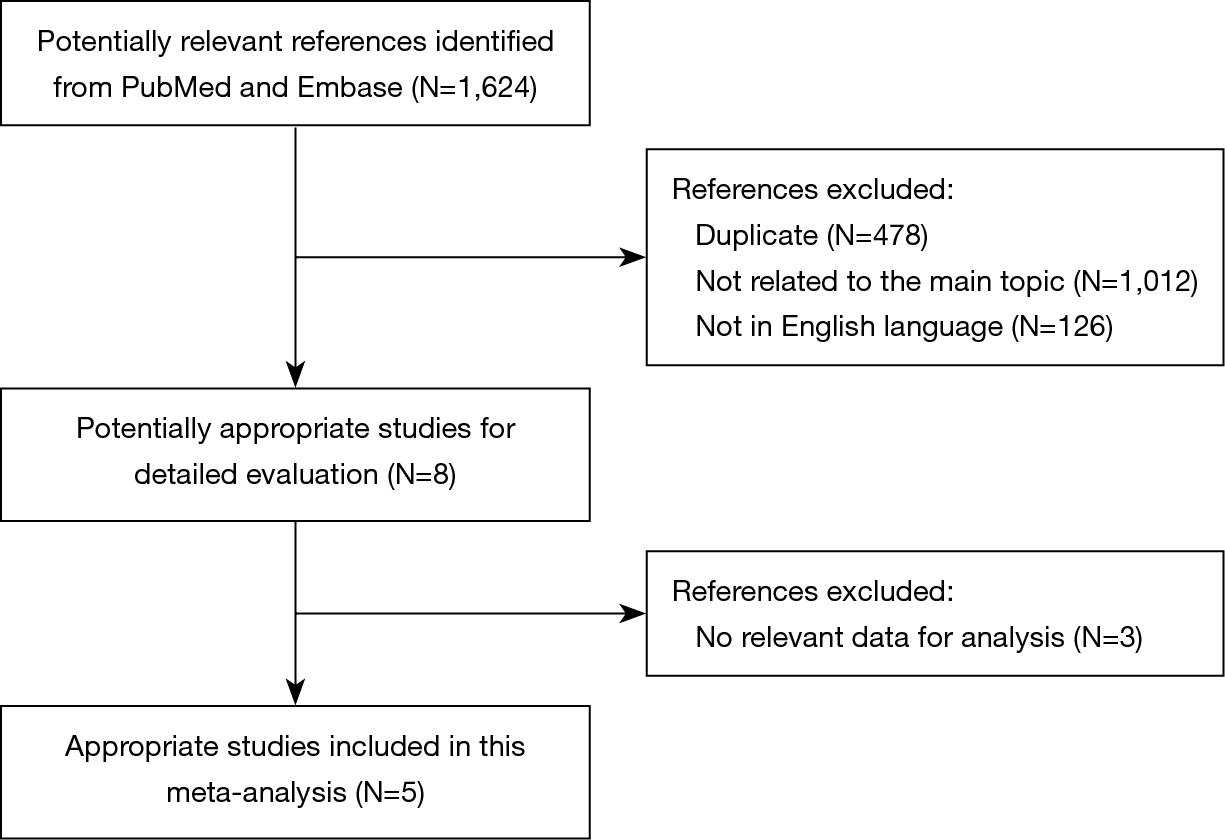 Figure 1 A flow chart showed the progress of studies through the review. 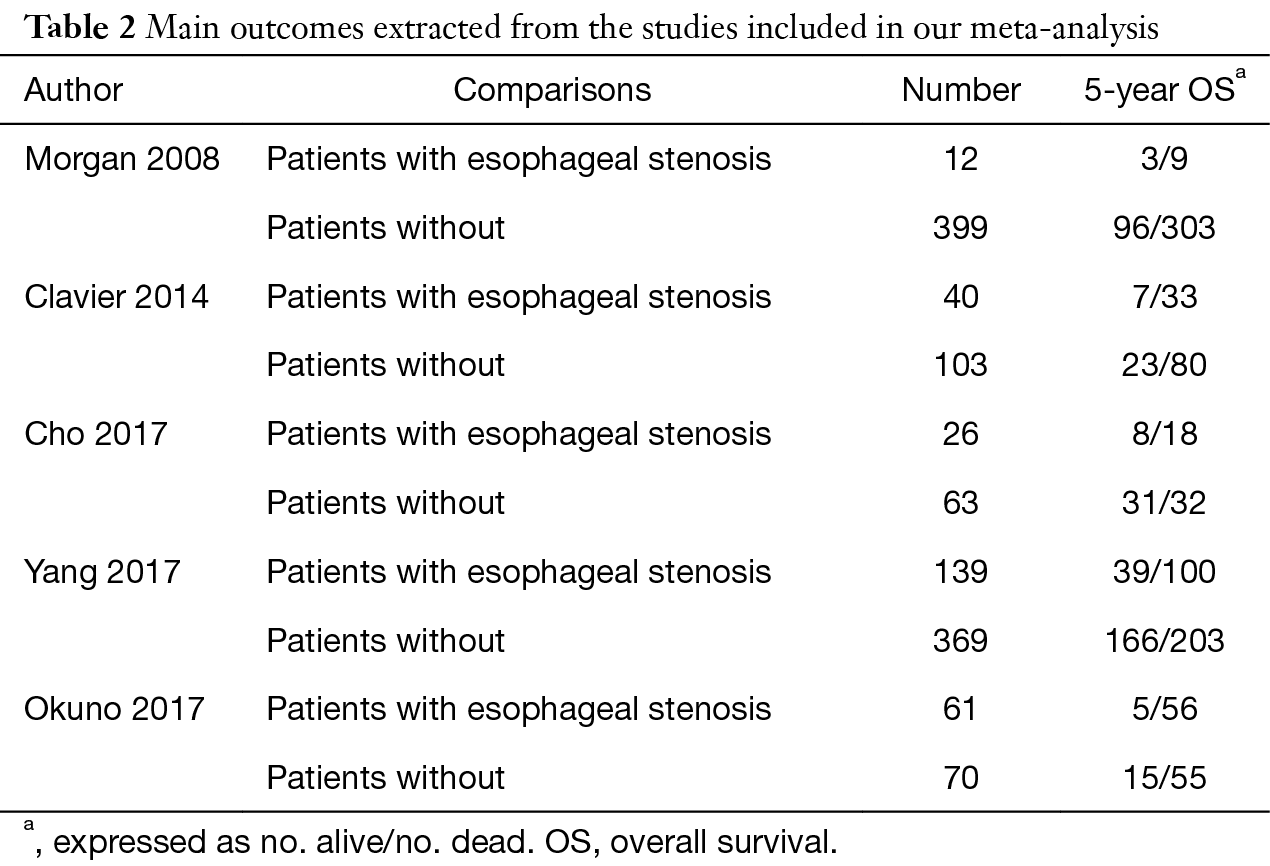 Quality assessment and risk of bias

The quality assessment and risk-of-bias analysis of the included studies were evaluated by NOS for those cohort studies (shown in Table 1). Three studies with NOS score of 7 were ranked as studies with high quality while other two studies had a NOS score of 6, indicating potential risk of bias for comparability. 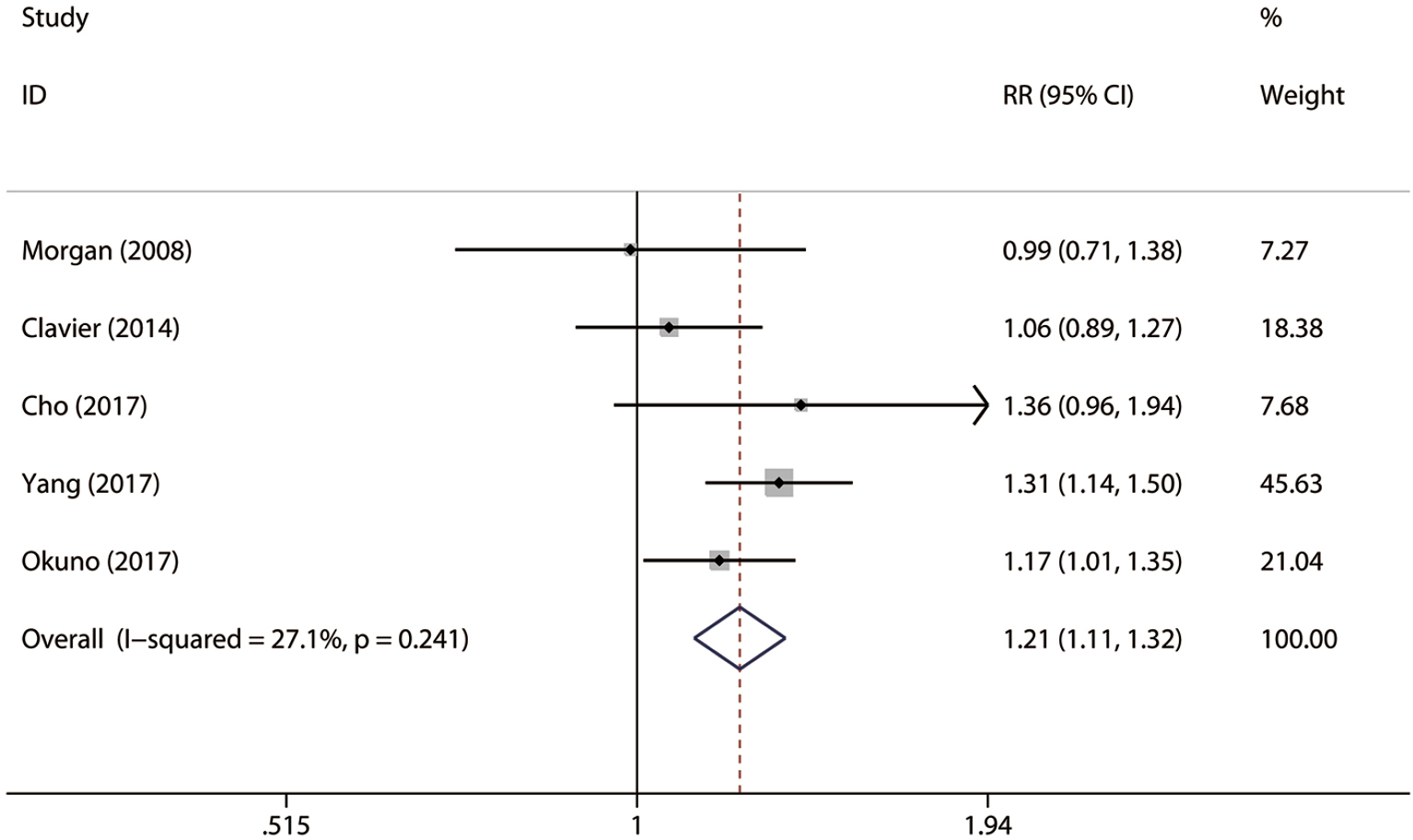 Figure 2 Forest plot of 5-year overall survival rate of patients with esophageal stenosis compared with those without.

We conducted the sensitivity analysis by sequential removal of each study to evaluate the stability of our result, and it showed that sequential removal of each study did not change the survival outcome of primary analysis (Figure 3). Moreover, after removal of the two studies with a relatively low quality, the survival outcome of the primary analysis did not change either. Publication bias was tested and the funnel plot for the analysis of 5-year OS had a symmetrical appearance (Begg’s test: P=0.624; Egger’s test: P=0.682) (Figure 4), which indicated no publication bias. 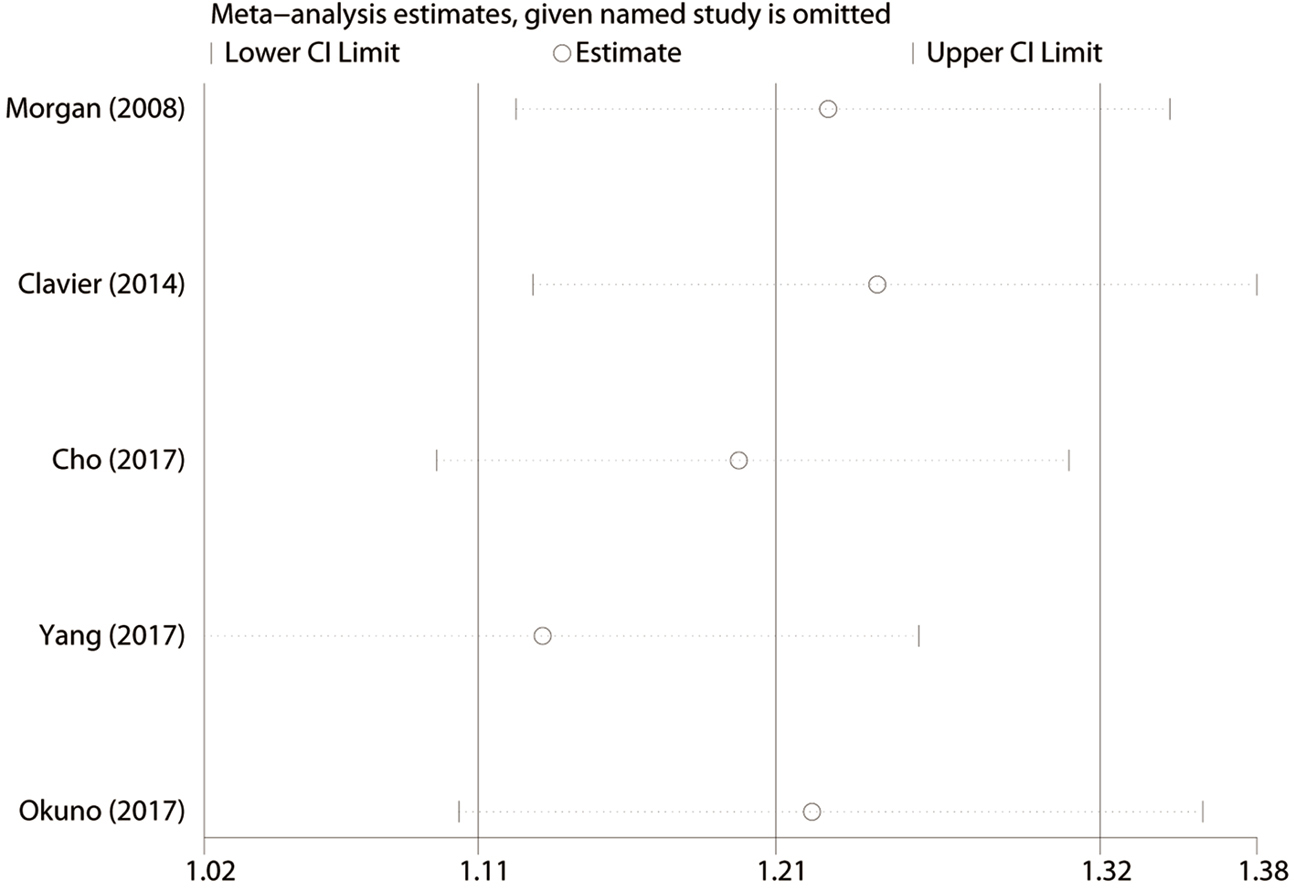 Figure 3 Sensitivity analysis of the results of overall analysis conducted by omitting each study sequentially for 5-year survival rate. 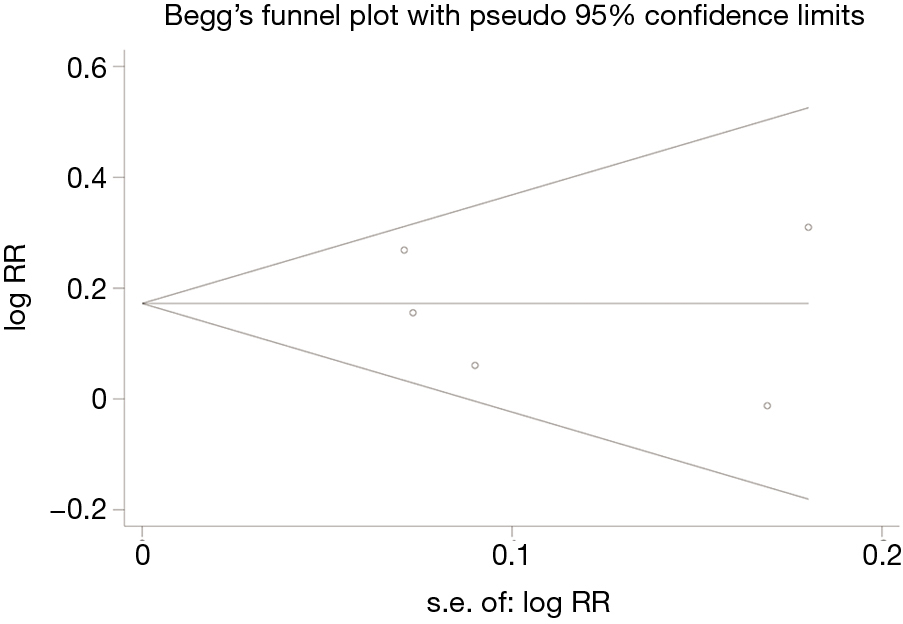 In our meta-analysis, we included five cohort studies with a total of 1,282 patients. Patients were divided into two groups by the status of cancerous esophageal stenosis before treatment. We found that the 5-year OS rate of esophageal cancer patients with stenosis was significantly lower than that of patients without stenosis (22.3% vs. 33.0%, respectively; P<0.001), suggesting that cancerous esophageal stenosis before treatment has a significantly unfavorable impact on the survival of esophageal cancer patients.

Our study has several limitations. First, lacking of well-conducted RCTs, retrospective cohort studies with a relatively short follow-up time might reduce the statistical power. Second, even though this is the first meta-analysis, our study suffered from limited sample size. Third, due to limited number of study, we could only focus on 5-year OS, but data of short-term outcomes and other long-term outcomes such as recurrence free survival could not be obtained from those original studies and thus were omitted for analysis. Fourth, the baseline characteristics (for example, disease stage) between patients with cancerous esophageal stenosis and those without were not well balanced in some studies, which could influence the validity of our results. Moreover, the definition of stenosis by Okuno et al. (8) included both dysphagia and failure to cross the tumor by EUS, which is slightly different from other studies. Finally, even though no obvious heterogeneity was observed in our study, patients included in our meta-analysis received various treatments including surgery, chemoradiotherapy, and palliative therapy, which could cause heterogeneity among studies. Therefore, more well conducted studies are needed to confirm and update our conclusions.

This first meta-analysis on current topic suggests that patients with esophageal stenosis due to esophageal cancer might have poorer prognosis compared to those without stenosis. High-quality studies with appropriate adjustments for confounding are needed to confirm the findings.