Congenital fibromuscular bands have been described in left ventricle or right atrium and have been diagnosed by echocardiography and CT scan. The first report of anomalous band in the left atrium was described in 1897 by Rollestone (1). We hereby present a case of a patient with an incidental finding of left atrial band during a minimally invasive mitral surgery procedure.

A 49-year-old woman was referred to our institution for a severe rheumatic mitral stenosis. She was symptomatic for dyspnea and palpitations with no comorbidities. Preoperative 2D echocardiography showed a severe rheumatic mitral stenosis with retracted and calcified leaflets and annular calcification. The valve area was 0.9 cm2. Left atrium was enlarged with a suspicious image close to the right pulmonary veins protruding in the atrial wall.

Patient was scheduled for a minimally invasive and video-assisted mitral valve replacement using transthoracic clamp and 3D video technology (Aesculap EinsteinVision®). Technical details and set up of our approach have been previously described (2-7). After cardio-pulmonary by-pass (CPB) was established and cardiac arrest achieved, the left atrium was opened and retracted with ad-hoc atrial retractor (8). A 10-mm 30-degree optic with 3D-technology was inserted into the pleural cavity. A 1-cm wide and 3-cm long smooth muscular band was identified in the left atrium. The band connected the atrial septum close to the fossa ovale to the right superior pulmonary veins (Figure 1) and was unrelated to the leaflets or the annulus. The muscular feature of the band was similar to the left atrium tissue without any vascular components. The band was pull back with the atrial retractor in order to allow optimal exposure of the valve. An additional recess was identified close to the origin of the band in the interatrial septum. We can probably interpret it as an embryogenetic remnant of an abnormal left atrial partition. This cavity was not in communication with any other structure (cul-de-sac) (Figure 2). Mitral valve was excised and replaced with a mechanical prosthesis. The band was left in place since it did not obstruct the valve and we tested the correct functioning of the prosthesis. Real time transesophageal echocardiography (TEE) enabled us to rule out any possible alterations in valve function or increased transvalvular gradient. The postoperative recovery was uneventful and the patient was discharged on post-operative day 6. 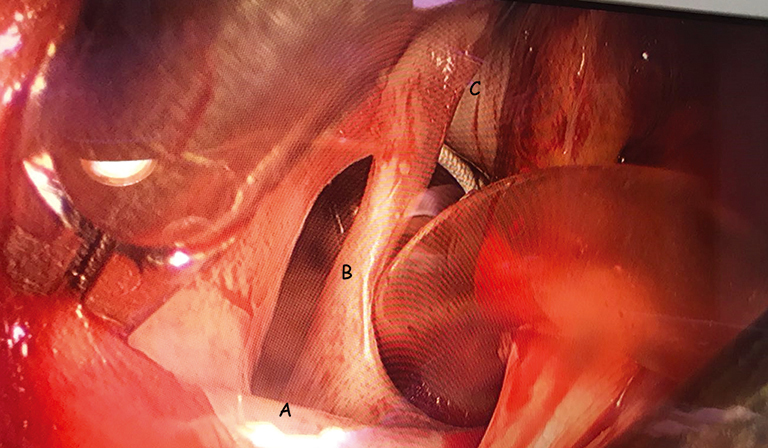 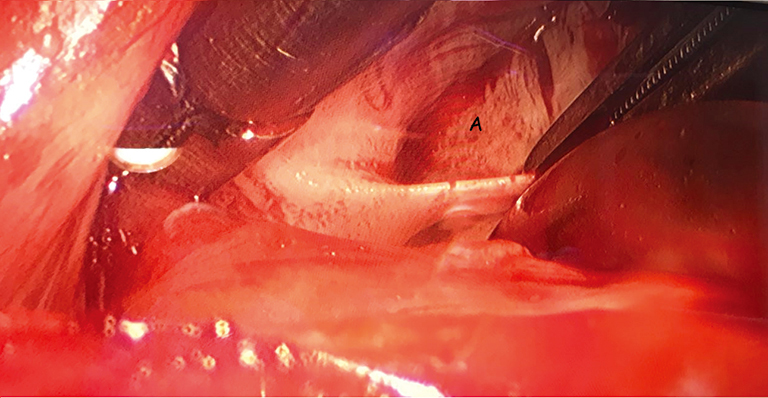 Left atrial anomalous band is a rare congenital benign anomaly, which exists in a small proportion of the general population. Its incidence in the left atrium was found in approximately 2% of autopsy cases (9). Its clinical implications are not yet clearly identified and the diagnosed cases are very sporadic. They were found to be associated with the presence of Chiari’s network, of patent foramen ovale, or premature atrial complex. Histopathological studies showed that the bands were composed of fibrous and muscular tissue, consistent with working cardiac muscle without the presence of Purkinje cells. The presence of these bands has been associated with mitral regurgitation (10) but, generally, it has a marginal impact on mitral physiopathology.

In our case, the band was an incidental finding during the surgical procedure. Even reviewing the echo images we did not identify any abnormality close to the origin of the right superior pulmonary vein that can be interpreted as a congenital fibromuscular band or a recess sac accompanying this abnormality. In our case, there was no patent foramen ovale but an anomalous recess in this area. In our case the excision of the band was not necessary to reach the mitral valve that could be simply displaced with the atrial retractor. Accordingly, the band was not finally excised since as previously specified, it did not determine any alterations in valve function neither an increased transvalvular gradient. Last, we decided to leave the band in situ in order to avoid any possible damage to the interatrial conduction system. On the other hand, the presence of a band might represent a challenge for trans-catheter techniques, for example in the treatment of the mitral disease such as MitraClip or annuloplasty procedures, as the access is achieved through the interatrial septum. Therefore, a complete study of the atrial cavity for a correct “navigation” of the catheters is mandatory. Finally, the presence of such anatomic anomalies might represent a tricky impairment during catheter-based ablation in the setting of atrial fibrillation. In this scenery, a CT scan diagnosis of a band has been described recently (11).