The role of plasma miRNAs in the diagnosis of pulmonary nodules

In recent years, liquid biopsy has emerged as a new detection technique, that can be applied to the diagnosis and monitoring of tumors (6). Moreover, microRNAs (miRNAs) are an important component of this technique. miRNAs are small, single-stranded, endogenous non-coding RNAs (7). More than 6,000 miRNAs have been discovered, and approximately half of them are human-related (8). They can promote or prevent tumor progression and metastasis, such as the function of proto-oncogenes and tumor suppressor genes. In recent years, some studies have shown that the expression of some miRNAs, such as miRNA-21 and miRNA-155 is upregulated in tumors. However, some miRNAs exhibit the opposite pattern, such as miRNA-34 and miRNA-145. This situation implies that it is helpful for us to detect the miRNA content to estimate the nature of the pulmonary nodules. At present, the tumor markers for lung cancer, which are used clinically, are carcinoembryonic antigen (CEA), cytokeratio-19 fragments (Cyfra21-1), neuron-specific enolase (NSE), squamous cell carcinoma antigen (SCCA) and so on. These tumor markers play a certain role in the diagnosis of lung cancer, but their specificity and sensitivity are not enough. Furthermore, these tumor markers are not elevated in many early lung cancer patients. Therefore, it is imperative to find new molecular biomarkers to help diagnose early-stage lung cancer. Additionally, miRNA can steadily exist in human plasma, express specifically in some tumors, and are not degraded easily by RNA enzymes, which make miRNA a potential new molecular biomarker (9).

After the first miRNA (miRNA let-7) was found, more than 300 miRNAs have been identified and considered to be related to human tumors. The role of miRNAs in the diagnosis of lung cancer has been only partly explored previously. Some studies have revealed that miRNAs play an important role in the development, progression, diagnosis, treatment, and prognosis of lung cancer. Following a lot of previous studies which have demonstrated the value of miRNAs for diagnosing pulmonary nodules (10-13), we measured 12 miRNAs (miRNA-17, -146a, -200b, -182, -155, -221, -205, -126, -7, -21, -145, and miRNA-210) in this study. The purpose of this study was to investigate the difference in the expression of miRNAs between benign pulmonary nodules and malignant pulmonary nodules and explored the role of plasma miRNAs in the diagnosis of pulmonary nodules.

The study was approved by the Ethics Committee of Sun Yat-sen University Cancer Center (No. B2017-050) and written informed consent was obtained from all patients. In this retrospective study, we collected people who were diagnosed with a pulmonary nodule by thoracic computed tomography (CT) and were scheduled to receive surgery from July 2016 to July 2017 at Sun Yat-sen University Cancer Center. In this study, patients were enrolled following the eligibility criteria: (I) all of the patients were diagnosed with a pulmonary nodule by CT before the surgery; (II) all of the patients had pathologically confirmed stage 0–II non-small cell lung cancer (NSCLC) or benign lung disease according to the International Association for the Study of Lung Cancer (7th version); and (III) all of the patients had complete clinicopathologic information. The exclusion criteria in this study were as follows: (I) patients received neoadjuvant therapy, including radiotherapy, chemotherapy, or chemoradiotherapy; (II) patients had a second primary tumor; (III) patients were not pathologically confirmed after surgery; and (IV) patients had stage III or IV lung cancer. Finally, 57 patients were included in our study. The flow was shown in Figure 1. 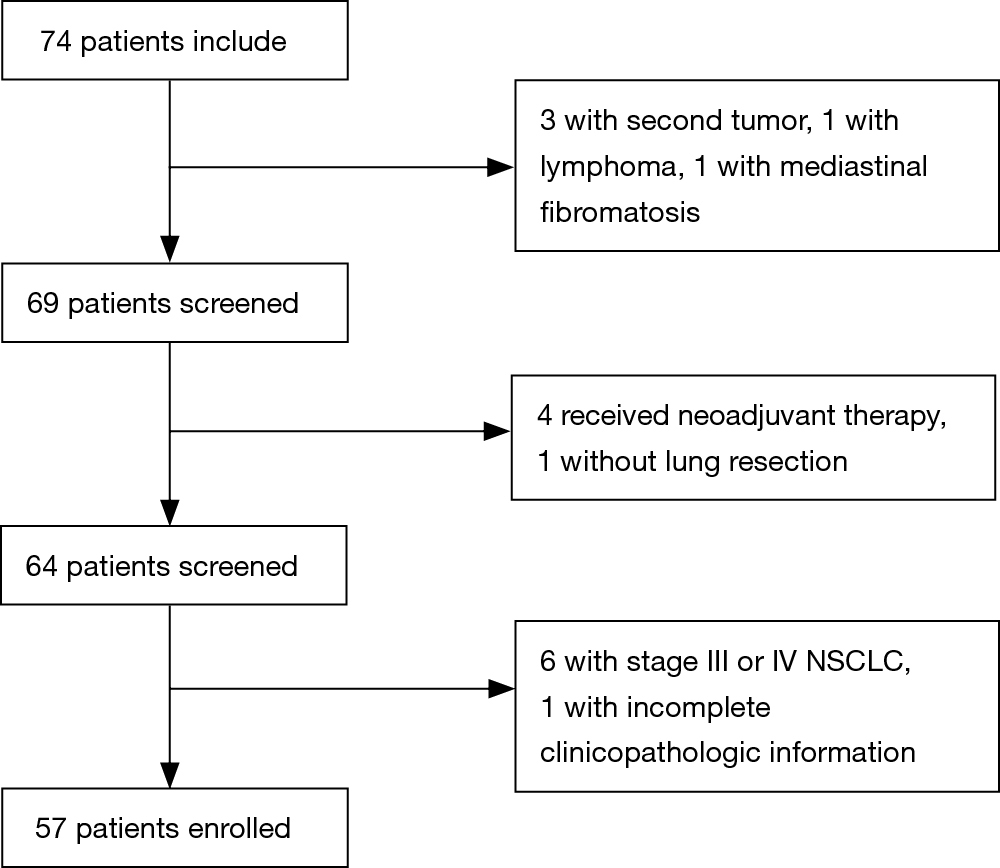 We drew approximately 5 mL of venous blood from all patients before the operation. We spun these samples in a centrifuge and obtained plasma. Then, the plasma was immediately stored at −80 °C. The MiRNeasy Serum/Plasma Kit (Qiagen, Germany) was used to extract the total RNA from the plasma (200 µL). The Omniscript RT Kit (Qiagen, Germany) was used to accomplish reverse transcription (RT) reactions. The levers of miRNAs were detected by real-time quantitative polymerase chain reaction (RT-PCR) using the SYBR Green Mix (Qiagen, Cat No. 208054). The relative miRNA expression was calculated using the 2−△△Ct method. In order to eliminate the bias during sample storage or RNA isolation, the cel-miR-39 was chosen as the inner control.

Difference in the plasma miRNA levels between NSCLC group and benign pulmonary nodules group was evaluated by Mann-Whitney U test and t-test. T-test, analysis of variance, Mann-Whitney U test, and Kruskal-Wallis test were used to evaluate the relationship between the expression levels of the plasma miRNAs and clinicopathologic characteristics. We used the receiver operating characteristic (ROC) curve to assess the efficacy of plasma miRNAs in the diagnosis of NSCLC. We used the Shapiro-Wilk test for the test for normal distribution. When the data was not normally distributed, we used the Wilcoxon rank-sum test to analyze data. T test was used for univariate analysis when the data was normally distributed. However, for multiple sets of measurement data, using analysis of variance. Results were Log10 transformed for analysis because of the magnitude of miRNA levels measured. Statistical analyses were performed using SPSS software version 21 (SPSS Inc., Chicago, IL). P values <0.05 was considered statistically significant. 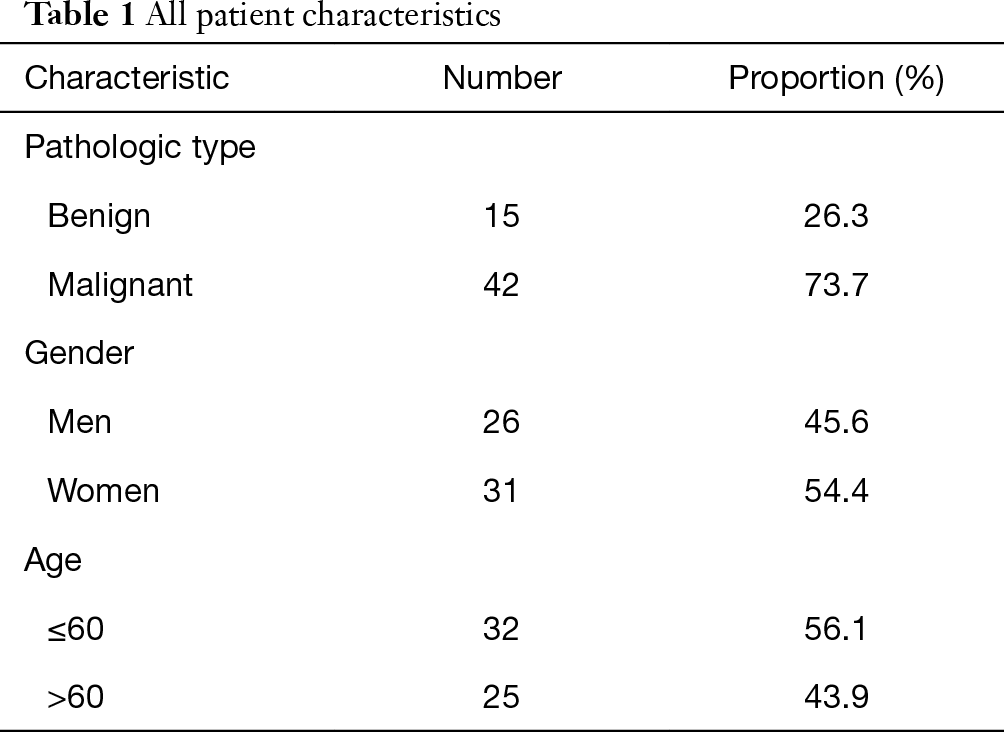 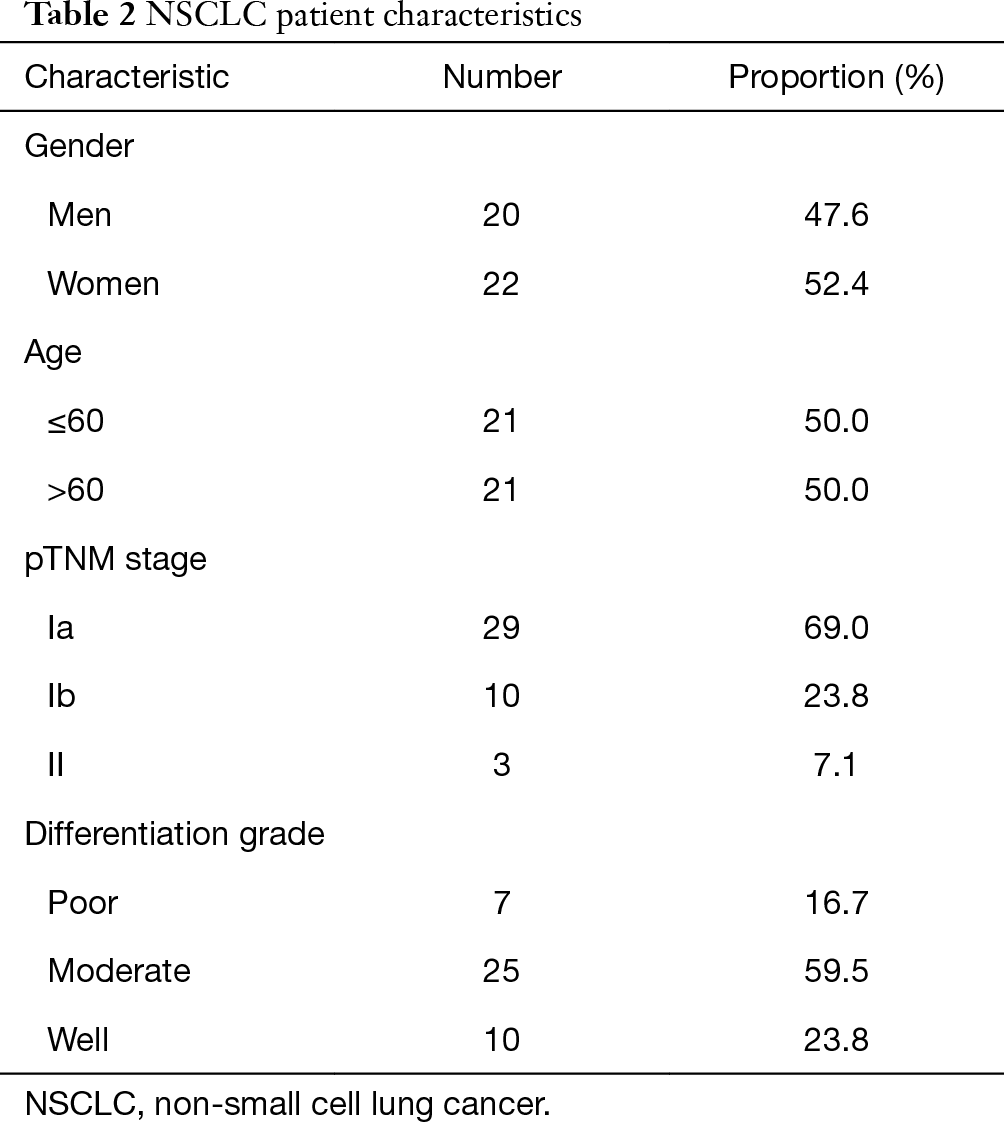 Association of the expression of miRNAs with clinical characteristics

The expression of 12 miRNAs

Fifty-seven patients were divided into two groups according to the characteristics of their pulmonary nodule (benign or malignant). The t-test and Mann-Whitney U test were used to compare the differences in the expression of the miRNAs of the two groups (NSCLC group and benign pulmonary nodules group). The results are listed in Table 4, which indicate that the expression levels of plasma miRNA-17, -146a, -200b, -182, -221, -205, -7, -21, -145, and miRNA-210 in NSCLC patients are significantly higher than those in the benign pulmonary nodules patients (P<0.05). However, for miRNA-155 and miRNA-126, there was not a significant difference between these two groups, the P values are 0.075 and 0.055, respectively.

Table 4 The expression of miRNAs of patients with pulmonary nodules

The role of plasma miRNAs in the diagnosis of pulmonary nodules

Lung cancer is the most common cause of cancer-related death in the world (14). The prognosis of lung cancer is still poor despite the advances in cancer treatments over the past decades. Late diagnosis of NSCLC is one of the most important reasons. Hence, new methods are urgently needed to diagnose early lung cancer. Previous studies indicate that miRNAs may be the potential diagnostic biomarkers of lung cancer (13,15).

We discovered that there were significant differences in the expression of the miRNAs between NSCLC patients and benign pulmonary nodules patients (miRNA-17, -146a, -200b, -182, -221, -205, -7, -21, -145 and miRNA-210 except miRNA-155, miRNA-126). The expressions of miRNA-17 (18), -182 (19,20), -221 (16,17), -21 (21,22), -210 (23) were significantly higher in NSCLC patients compared with that of benign pulmonary nodules, which confirmed the previous research. The expression of miRNA-146a was increased and downregulated in a variety of carcinomas (24), while miRNA-146a expression was increased in NSCLC patients in our study compared with that of nonmalignant disease. Han et al. demonstrated that miRNA-200b expression was upregulated in bladder urothelial carcinoma (25). However, it was downregulated in liver cancer and renal cell carcinoma (26,27). We found that it was upregulated in NSCLC. The research concerning the expression level of miRNA-200b in lung cancer was inadequate and it was upregulated in NSCLC in our study. Xiong et al. reported that miRNA-7 was downregulated in NSCLC (28), while Ye et al. revealed that miRNA-145 was also downregulated in NSCLC (29). These results and our conclusions were inconsistent. More samples are needed to verify this phenomenon in the future. While for miRNA-155 and miRNA-126, there was not a significant difference between NSCLC group and benign pulmonary nodules group, the P values are 0.075 and 0.055, respectively. Their P values are closed to the 0.05, especially miRNA-126 (P=0.055). Maybe due to the small sample size.

We used ROC curves to determine the diagnostic value of 10 miRNAs (miRNA-17, -146a, -200b, -182, -221, -205, -7, -21, -145, -210) for lung nodules. A number of studies have determined that miRNAs may be potential molecular biomarkers for early carcinoma including lung cancer (15,30). Zhang et al. demonstrated that plasma miRNA-145 and miRNA-21 can be used as potential biomarkers for diagnosing lung cancer. The sensitivity and specificity of miRNA-145 were 80.6% and 89.2%, and 77.5% and 85.5% for miRNA-21, respectively (31). Sromek et al. found that the combination of miRNA-9, -16, -205, and -486 can serve as potential NSCLC biomarkers with 80% sensitivity and 95% specificity (32). In the present study, the miRNAs have a relatively high sensitivity (54.8–83.3%) and specificity (60.0–86.7%) for the diagnosis of NSCLC. Currently, growing numbers of lung nodule patients have been discovered because of the increasingly widespread use of low-dose spiral computed tomography (LDSCT) and CT. However, the specificity of LDSCT/CT is limited, and false positive rate is relatively high (33). Additionally, our results reveal that, with the help of LDSCT/CT, miRNAs can provide an auxiliary diagnosis of lung nodules. Based on previous literatures, cancer-associated miRNAs played crucial roles in tumorigenesis and may be as diagnostic and prognostic biomarkers in cancer, including carcinoma of lungs (9,34). As a new latent molecular biomarker, miRNA has its advantages: non-invasion, easy sample management, cost-effectiveness, which make it may influence the future diagnostic method of lung cancer. This study focused on 12 miRNAs and selected 10 miRNAs which contribute to produce the prediction in distinguishing lung carcinoma patients from benign subjects according to the result. This pilot study provided the theory foundation for the development of the research—the role of plasma miRNAs in early diagnosis of lung cancer.

This study has several limitations, our data was collected retrospectively and a single team. This approach may lead to a selection bias. Furthermore, was the small sample size, which may be the reason for no difference between the NSCLC group and benign pulmonary nodules group for the levels of miRNA-155 and miRNA-126. Designing a prospective study with a large sample size in the future, conducting combined diagnosis of miRNAs and constructing a risk score model would be more valuable.

In summary, 10 miRNAs (miRNA-17, -146a, -200b, -182, -221, -205, -7, -21, -145, -210) were found that they had relatively high diagnostic efficacy to discriminate the nature of pulmonary nodules. Understanding miRNAs have the potential to become novel non-invasive biomarkers for the diagnosis of early-stage lung cancer, and as the complementary of LDSCT screening procedure. MiRNAs may contribute to the development of diagnostic techniques for early-stage lung cancer in the future.

Funding: This study was funded by National Key Research and Development Program, China (No. 2016YFC0905400).

Ethical Statement: The study was approved by the Ethics Committee of Sun Yat-sen University Cancer Center (No. B2017-050) and written informed consent was obtained from all patients.