Cardiac myxomas are the commonest primary cardiac tumors, accounting for 50% of cases (1). Arising from the endocardial tissue, most of myxomas are located in the left atrium, with the percentage from 75% to 83% of the total; while the percentage in the right atrium is less, up to 10–18%, and they often appear more frequently in the area near to fossa ovalis (1,2). It is uncommon to see that myxomas derive from the heart valves. Based on the available literature, only a few cases of myxoma originated from mitral valve have been reported so far. A recent review has recorded that only 55 cases of mitral valve myxoma were reported in the Medline and Embase databases from 2006 to 2011 (3). To our knowledge, there are rare cases reported on second ectopic recurrence of mitral valve myxomas after Cardiac myxomas resection. Therefore, we give a report on this unusual presentation of second ectopic recurrence of mitral valve myxomas.

A 62-year-old female patient, who had been operated for left atrium myxoma and right atrium myxoma 30 years ago and 5 years ago respectively, was referred to our institution due to the ectopic recurrence of a heart mitral valve tumor. The patient’s detailed medical document for myxomas resection in previous surgeries proceeded in other medical institute is not available. There was no evidence showing about Carney complex, and her family history of heart disease and tumors was negative. There were no other symptoms in the following fields including cardiology, respiratory or neurology. She did not suffer the systemic hypertension, diabetes mellitus and had a stroke. On physical examination at presentation, the oxygen saturation was tested, with the number of 98% when he was at rest without taking in oxygen. Auscultation of the heart revealed a moderate systolic murmur at the apex position. Her heart was beating regularly at the rate of 95 beats per minutes, and blood pressure is measured at 95/60 mmHg.

Laboratory data were unremarkable and sinus rhythm was showed in electrocardiogram. The electrocardiogram indicated that the patient had no changes suggestive of infarction or myocardial ischemia. Blood sugar and serum lipids profile were all normal. Renal function parameter was normal with serum creatinine was 52 µmol/L. Her alanine transaminase was 32 IU/L, aspartate transaminase was 35 IU/L. The time of activated partial thromboplastin with kaolin (APTT) was 125 s. The complete blood count showed the white blood cell count was 6.4×109/L, neutrophil count was 4.6×109/L and hemoglobin concentration was 155 g/L with a hematocrit 29%. Chest X-ray showed a normal postoperative change. Coronary angiography showed no significant stenosis of the coronary arteries. Transthoracic echocardiogram revealed a mass existing in atria, which was adherent to mitral valve in apical four-chamber view (Figure 1A). The homogeneous mass was mobile, hyperechoic, with irregular margins measuring 13.75×19.45 mm2 (Figure 1B). The mass prolapsed intermittently through the mitral valve into left ventricle. The left ventricular (LV) end-diastolic dimension is 51 mm and the calculated ejection fraction is 63%. There was no obvious dilation in her left atrium (diameter =40 mm) and other heart chambers. It was estimated that the mean value of pressure in pulmonary artery was 20 mmHg.

Figure 1 Transthoracic echocardiogram. (A) A mass existing in atria adherent to mitral valve in apical four-chamber view; (B) a mass measuring 13.75×19.45 mm2 prolapsed intermittently through the mitral valve into left ventricle.

During the surgery, mass was seen to arise from anterior mitral leaflet to the left ventricle side (Figure 2A). It was excised along with the anterior mitral leaflet (Figure 2B). Mitral valve was replaced with a 25 size St. Jude mitral valve prosthesis. Histopathologically, hematoxylin & eosin stained histology of left atrium and left ventricular side shows myxoid matrix with myxoma cells (Figure 3A,B). Masson’s trichrome staining shows multitudes of collagen fibers existing in the myxomas of left atrium side when compared to the left ventricular side (Figure 3C,D). The patient had an uneventful recovery postoperatively and was discharged on the 5th postoperative day. The patient is doing well after 4 weeks follow-up with New York Heart Association functional class I. 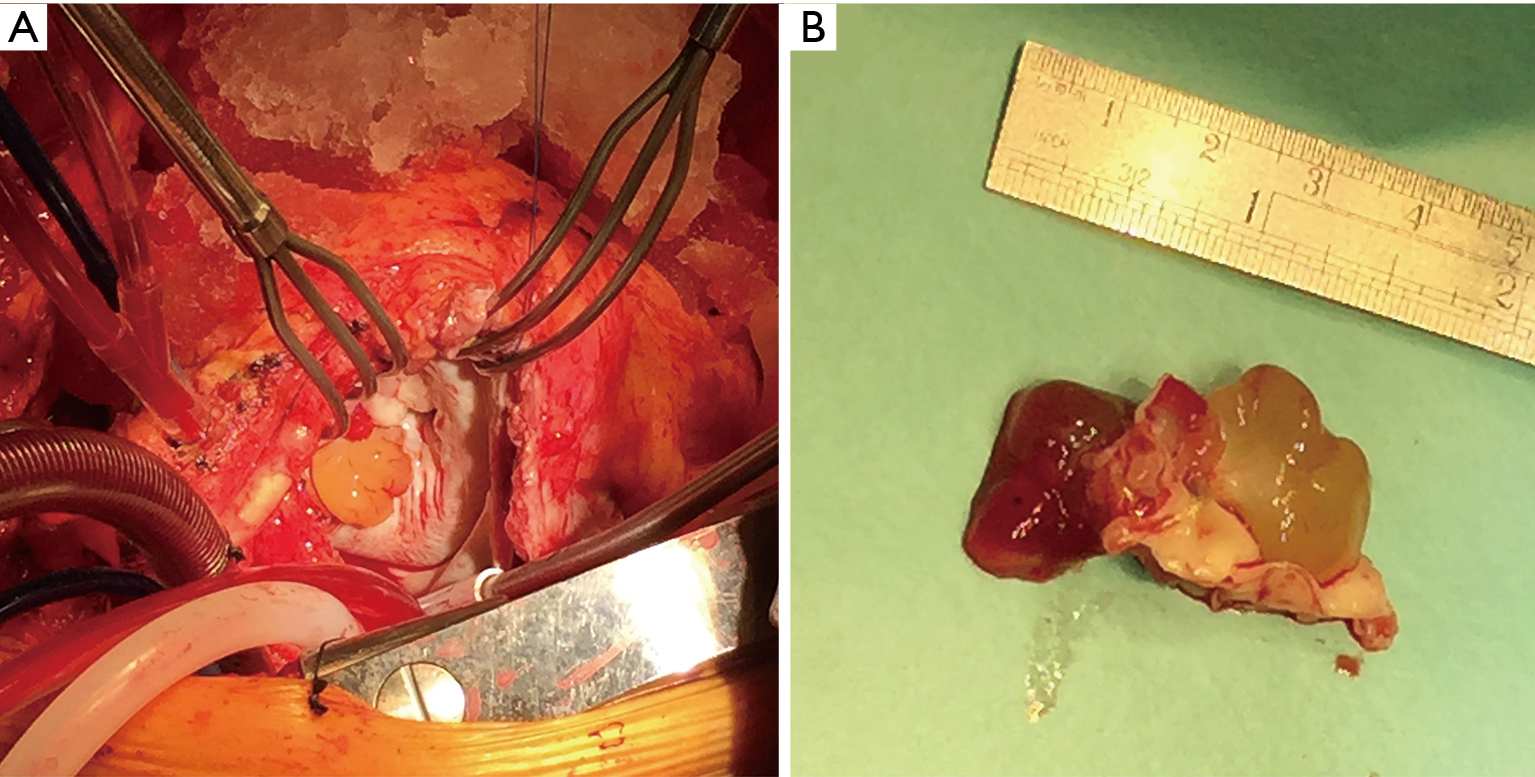 Figure 2 Surgical findings. (A) Intraoperative image showing a mass with LA and LV side from mitral leaflet; (B) mass was excised along with the mitral leaflet. 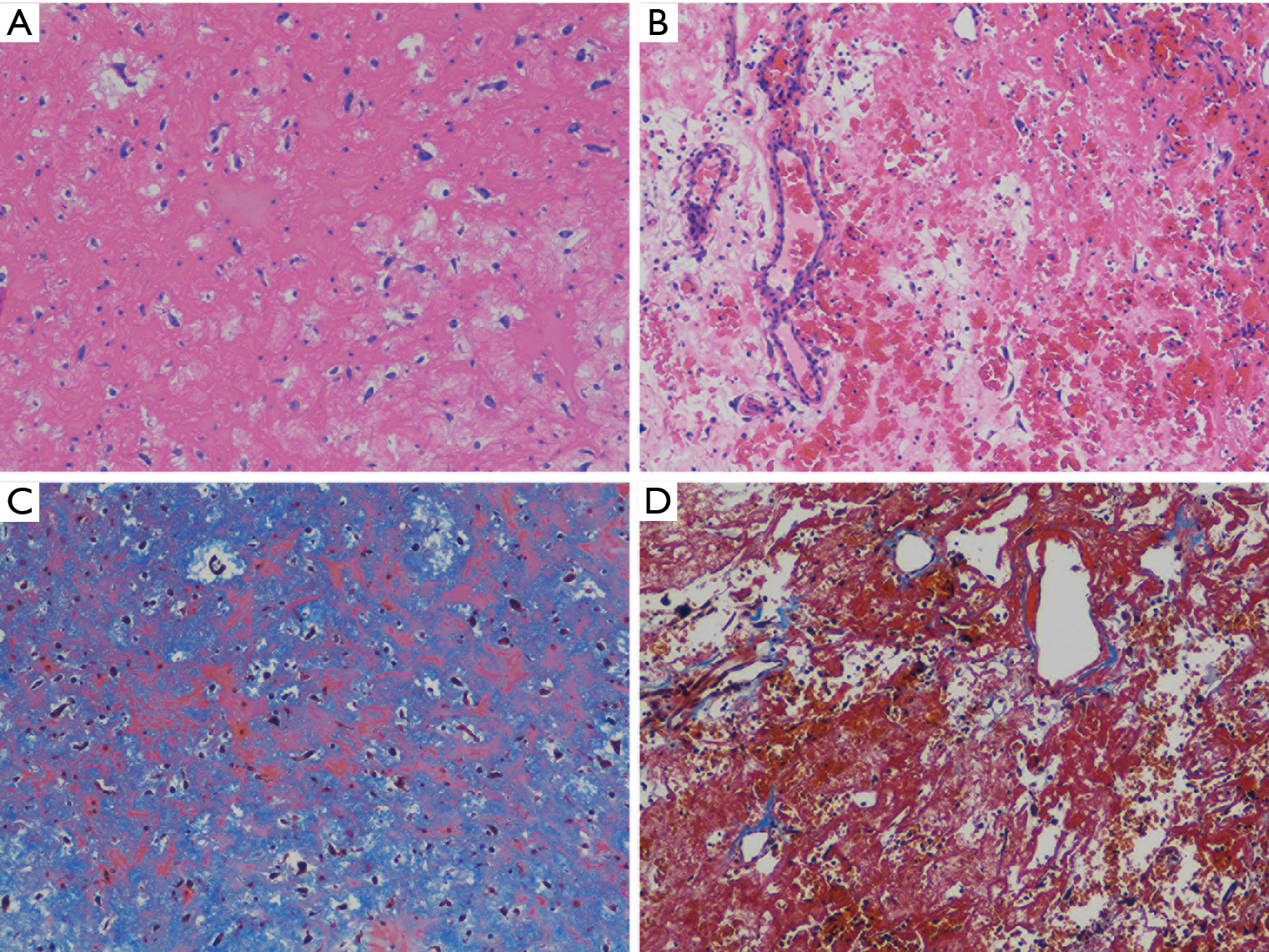 Thrombus, vegetation and primary cardiac tumor are included in the differential diagnosis for a cardiac mass. Myxoma appears commonly or prevalently in primary tumors of the heart, and it usually arises from endocardium and projecting into atrium.

They are most prevalently found in the left atrium and attached to interatrial septum. Originating from the posterior wall of the left atrium mostly, while in the right atrium, ventricles or valves, myxomas are rare. Even if being benign, it may lead to embolic events or cause even sudden death. Among patients with primary heart myxoma, it is not a mandatory requirement for them to receive coronary angiography. For patients who has myocardial ischemia features or aged over 40 at the risk of suffering coronary heart disease are suggested to proceed the coronary angiography examination.

In general, patients with cardiac myxoma present with symptoms of hemodynamic obstruction, embolization, or constitutional changes. Once the diagnosis is confirmed, immediate surgical treatment is indicated in all patients to avoid further tumor embolism and valve obstruction. Cardiac myxomas can be excised successfully with a low rate of mortality and morbidity. Prognosis is excellent after surgical excision. It is reported that recurrence rates for cardiac myxomas range from 4–7% in sporadic cases and fluctuate from 10–21% in familial cases (4). Although with the high rate in recurrence, second recurrences of left atrium or right atrium myxomas are rare (5). Second ectopic recurrence of mitral valve myxomas is even rarer. After recurrences being diagnosed, surgery should be performed immediately and urgently, for the purpose of preventing complications such as obstruction of the mitral orifice or embolic events.

This case is presented because the mitral valve myxomas with two sides mass are rare, especially for the second ectopic recurrence of cardiac myxomas after resection. To our knowledge, this case probably is the ﬁrst one to report a second ectopic recurrence of mitral valve myxomas after myxomas resection. The authors cannot be certain of this etiology. Considering the influence of the mitral myxomas on the orifice area of mitral, hemodynamic disorders such as left ventricular outflow tract obstruction, mitral valve stenosis or mitral valve regurgitation may occur in future. In this particular case, the patient suffered a mitral regurgitation. The surgery procedure has combined surgical resection with mitral valve replacement to prevent obstruction of the mitral orifice or further neurologic sequelae such as embolic events.

We present a rare case of second ectopic recurrence of mitral valve myxomas in an old female who underwent a second time surgical cardiac myxomas resection. She was referred for her third cardiac surgery. We advocate that it may be prudent to excise such tumors.

Conﬂicts of Interest: The authors have no conflicts of interest to declare.