Lung cancer is one of the most life-threatening diseases in the world with high morbidity and mortality (1). Non-small cell lung cancer (NSCLC) accounts for 85% of lung cancers (2). Pulmonary adenocarcinoma mainly locates in the peripheral lung field which may result in pleural invasion. Pleural invasion, which is pathologically confirmed, is an important staging indicator and prognosis factor. Visceral pleural invasion (VPI) is defined as the tumor that extends to the elastic layer of visceral pleura but not beyond the visceral pleural surface (3,4). If the tumor (≤3 cm) is confirmed with VPI, the TNM upstages to T2 (3). Many scholars found VPI could be an independent risk factor of poor prognosis (4-6). One of the most well-concerned pleural signs on CT is pleural indentation (PI) which can be an indicator to the malignant lesion (7). Hsu et al. categorized pleural tags into 3 types and firstly evaluated the association of pleural tags with VPI of NSCLC that did not about the pleural surface (8).

The review board of Tongji Medical College, Huazhong University of Science and Technology approved the protocol of this study (No. S254) and waived the requirement for patient informed consent.

Clinical data were retrospectively reviewed, including pathological records and CT findings of patients with pulmonary adenocarcinoma treated in our institution from September, 2014 to March, 2017. The inclusion criteria were as follows: (I) tumor size was smaller than 3 cm, (II) distance from tumor to chest wall was smaller than 3 cm, (III) without other severe lung diseases such as atelectasis, infection, pleural effusion, etc. The exclusion criteria were (I) ill-defined clinical data including unclear CT findings or incomplete pathological records, (II) the duration between CT imaging and subsequent surgery was more than 2 weeks.

Fifty-two patients, including 31 males and 21 females aged from 40 to 77 years (median age 58 years) formed this review. Of these, 41 patients underwent tumors resection with pathological record of the tumor extent, and 11 patients underwent needle biopsy.

All the resected tumors (pathologically stained by Hematoxylin and Eosin) with their involved pleurae (masstone stain) were evaluated by microscopic specimen in the slice thickness of 0.5 cm. The specific elastic stain was performed if the elastic layer of involved visceral pleura was unclear. Pleural invasion was staged according to the 8th edition of the TNM staging system as following:

All the reconstructed thin-slice images were sent to the Picture Archiving and Communication System (PACS). The images could clearly show the tumor location, density and size in proper window width and level by the reference standards of 1,000 and −400 Hu. Pleural signs were categorized into five types of non-interlobar fissure pleura and four types of interlobar fissure pleura (Figure 1). 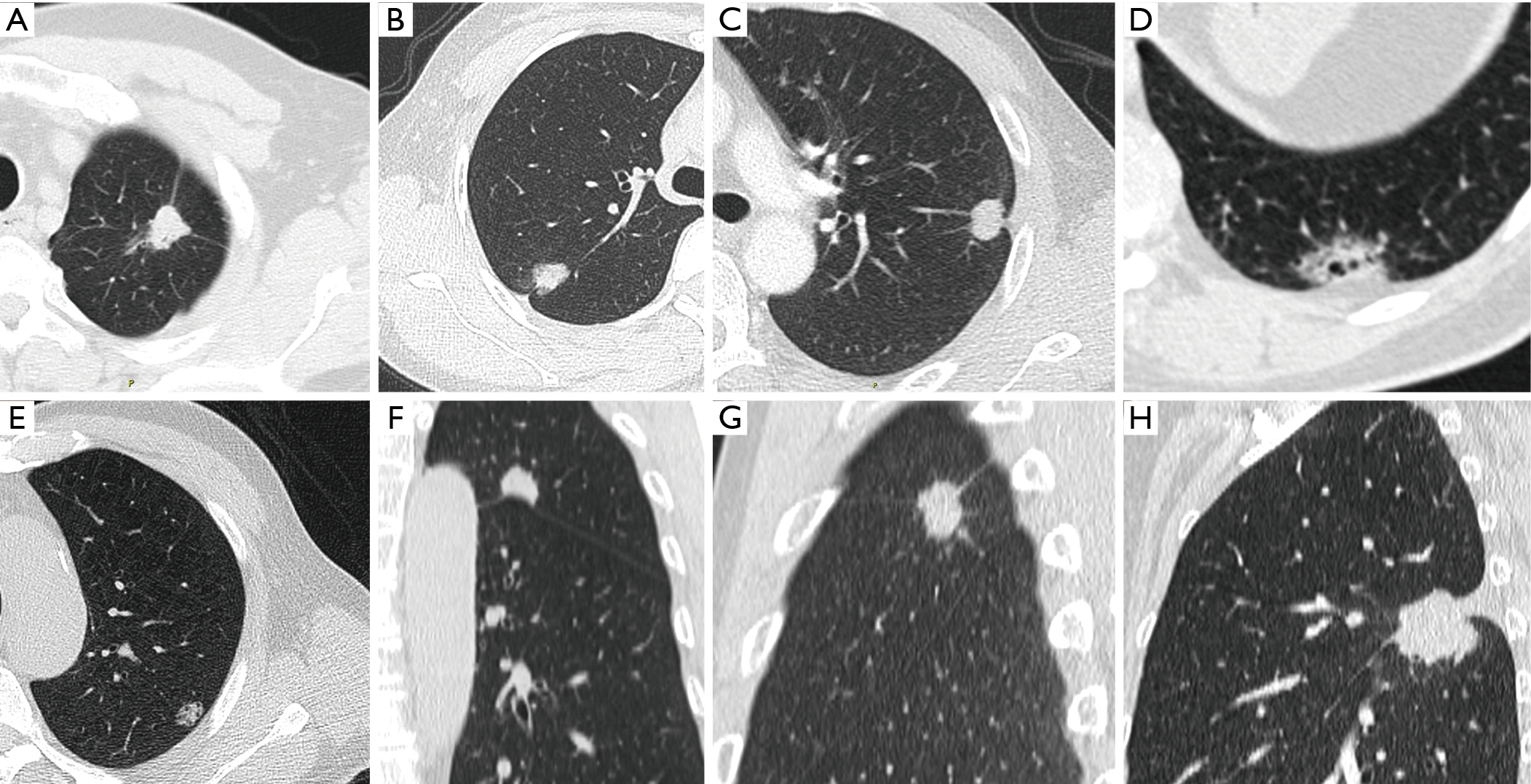 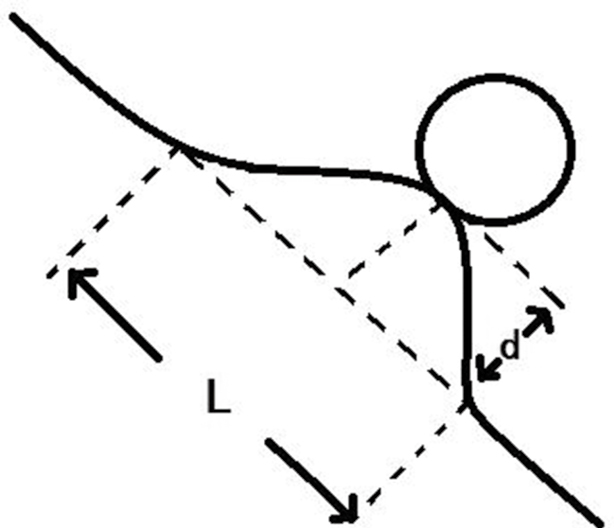 All data were analyzed by using a statistical software (SPSS version 22.0). The descriptive analysis for tumor location, size, density and pleural signs were performed. Levene test was performed to test the data distribution, and then independent-sample t-tests were performed to evaluate the relationship of tumor distance to pleura between type I with II of group B and that of the PIF value between group A with B. Durbin-Watson autocorrelation test was performed, and then linear regression was performed to analyze the relationship of PIF with tumor size and tumor distance to pleura. Chi-square test (Fisher exact test) and descriptive analysis were performed to evaluate the association of pleural signs with VPI. A P value less than 0.05 was indicative of statistical significance. 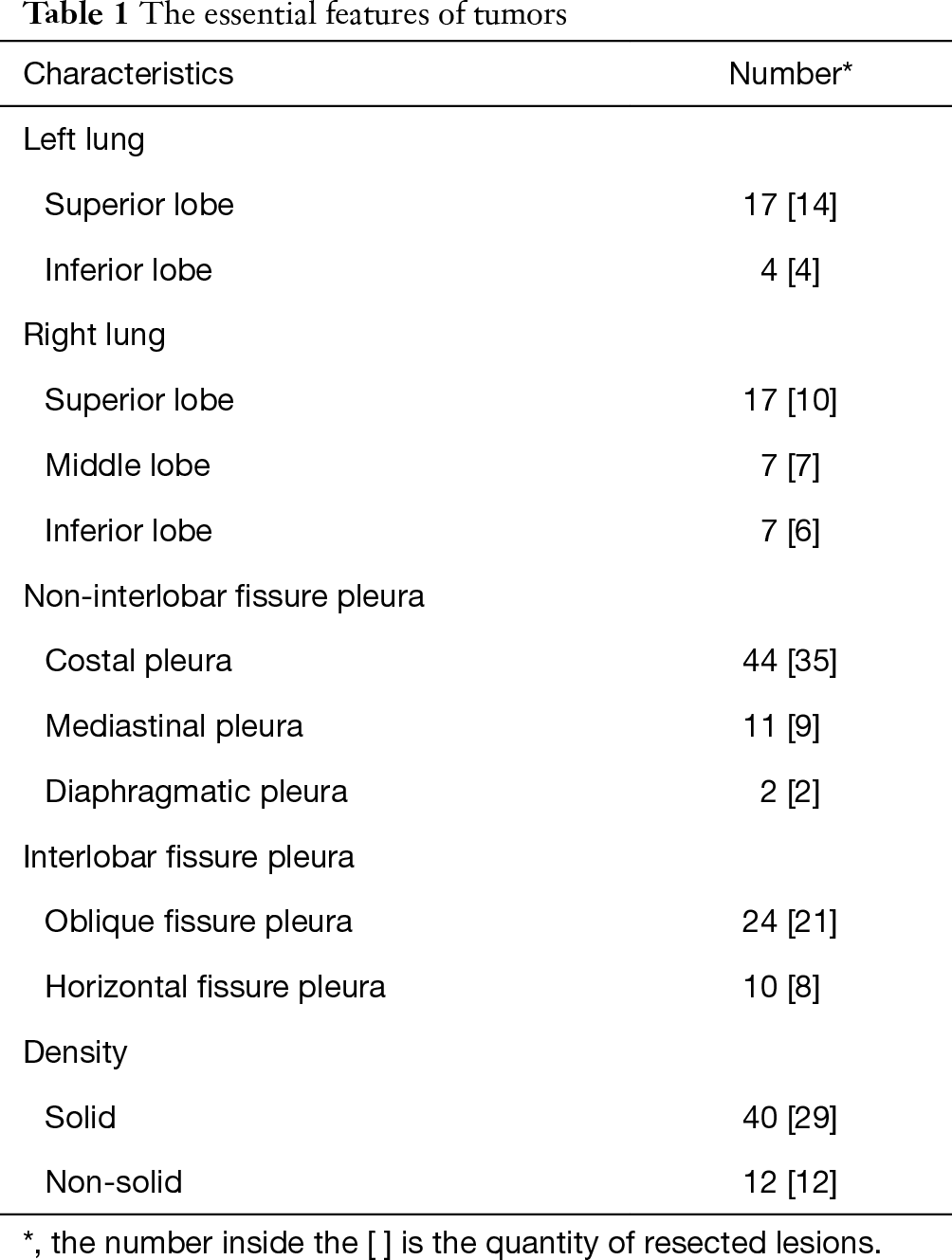 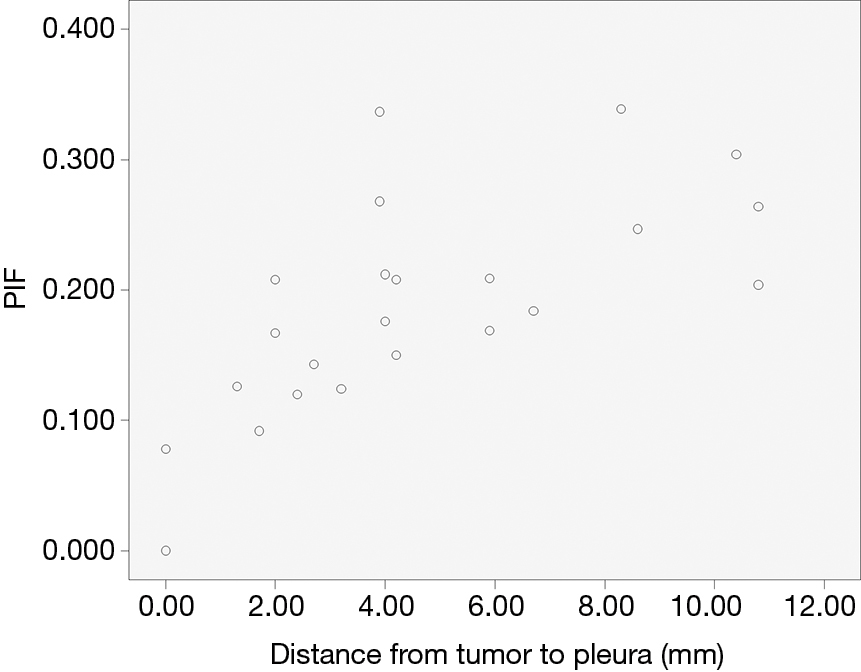 The part of the involved pleurae with tumors resection showed PI in the gross specimen during and after the operation. When the tumors were sectioned perpendicular by the pleura, the involved pleura showed indenting to the tumor with unclear boundary (Figure 4).

The pleural signs were categorized into nine types according to the involved pleural morphological changes. Of these, type I–III of group A and type I–II of group B are different forms of PI, which were also called as pleural retraction sign and pleural tags. PI was firstly discovered by Simon in 1962 and subsequently comprehensively depicted by Rigler in 1965 (7,9,10). Some scholars found that the causes of PI were associated with intratumor fibrosis and tumor distance to chest wall (11), which could be the factors for different forms of PI in group A and B.

A new radiological parameter called PIF was defined to quantitatively evaluate the extent of pleural shift. In our study, the PIF value in group A was bigger than that in group B which was resulted from the structure features of different pleurae. Non-interlobar fissure pleura consisted of visceral pleura, pleural cavity and parietal pleura which was fixed on the chest wall, but interlobar fissure pleura consisted of bilayer visceral pleura which was mostly surrounded by aerated pulmonary tissue. When the tumor pulled the visceral pleura of non-interlobar pleura, the negative pressure of pleural cavity increased so as to restrict the movement of visceral pleura especially in the lateral direction. If tumor pulled visceral pleura of interlobar pleura, the aerated pulmonary tissue wasn’t stable, resulting in the broad pleural shift. The PIF value had no correlation with tumor size but with significant linear correlation with tumor distance to pleura in type I of group B. We could estimate the PIF value according to the tumor distance by the equation of linear regression. The tumor pushed interlobar pleura with pleural shift was sometimes difficult to be differentiated from tumor growth across the fissure.

According to the golden standard of pathological records, pleural invasion is divided into four stages while VPI is defined as Pl1 or Pl2 (3,12). When the lung cancer (≤3 cm) is accompanied by VPI in group A, the TNM upstages to T2 (3). But it is still controversial to stage the tumor with VPI in group B. Some researchers proposed staging to T2 which was in accordance with the Japanese lung cancer society (13,14), while some other researchers proposed staging to T3 according to the prognosis (15). In a word, it is important but difficult to evaluate the presence of VPI preoperatively.

In our study, the involved pleurae of type III were with the highest rate of VPI (87.5%) in group A followed by type IV and II. All the involved pleurae of type I in group A were confirmed without VPI. The pathologies of pleural tags are lymphatic edema for obstruction, cancer cells infiltration along lymph vessels or inflammatory cells infiltration and fibration (8). The pleural tags in type III showed thickener and unclearer which may indicate the presence of tumor cells infiltration and obstruction result in lymphatic edema, and then generates VPI. The involved pleurae of type IV in group A were also confirmed with high rate of VPI, especially with non-intact extrapleural fat layer which may predict the presence of VPI. But it may also confirm with VPI when the tumor presented with intact extrapleural fat layer in previous study (16). The involved pleurae of type I in group B were also with a high risk of VPI (84.2%) which can be an indicator to the presence of VPI. But the value of PIF had no significant correlation with VPI. Two tumors with type III pleural sign in group B were all confirmed with VPI, which may be an indicator to VPI but should be verified by more cases. On the other hand, it is difficult to clinically and pathologically assess the tumor involvement of adjacent lobes which is vital to the tumors’ staging. The anatomic variation of interlobar fissure, which includes incomplete interlobar fissure (17) or fusion of the adjacent lobs (18), makes it even harder. Craig et al. proposed a classification of the pulmonary fissures to guide the clinical process according to the pleural variation (19). Some scholars found that reactive pleurisy rarely involved mediastinal pleura, so that the mediastinal pleural abnormality mainly prompts the presence of malignant lesions (20). In our study, six of seven patients with mediastinal pleural abnormality were confirmed with VPI while two other patients without mediastinal pleural abnormality were confirmed without VPI. The mediastinal pleural abnormality (exclude type V of group A) may increase the accuracy of the diagnosis of VPI.

There still existed some limitations in our study. The retrospective study had some limitation in the contrast of imaging and pathological features. Because of the rigour inclusion criteria and single institution study, the sample size of study was unsatisfactory. However, we have done our best to overcome the shortage by inviting the rich experienced pathologists and radiologists to analyze the pathological records and CT findings. Further prospective large-sample study and logistic multivariate regression analysis are mandatory to find the potential indicators to VPI, even to predict the incidence of VPI.

Pleural signs of pulmonary adenocarcinoma can be categorized into five types of group A and four types of group B. The PIF value is firstly defined and that of type I in group B can be estimated by the equation of linear regression. The rate of VPI in type III,IV of group A and type I of group B are higher while the ratio of VPI in type III of group B is 2/2 which may be the indicators to VPI. Non-intact extrapleural fat layer and mediastinal pleural abnormality may increase the diagnosis accuracy of VPI in the basis of those pleural signs.

Ethical Statement: The review board of Tongji Medical College, Huazhong University of Science and Technology approved the protocol of this study (No. S254) and waived the requirement for patient informed consent.