Bicuspid aortic valve with critical coarctation of the aorta: single- or two-stage operation?

A bicuspid aortic valve (BAV) is the most common congenital heart disease with a reported incidence of about 1% to 2% in the general population (1-5). It may occur as either an isolated cardiac defect or in association with other congenital heart malformations (1,3-10). The most well-known anomaly associated with a BAV is aortopathy (1,3-9,11-13), which include coarctation of the aorta (CoA), aortic dissection, or aortic aneurysm. According to previous literatures, patients with BAV had a higher incidence of CoA than other aortic defects (14-17), leading to increased morbidity and mortality (1,14-18). Therefore, surgery is recommended once the diagnosis is established.

Twenty patients with a concurrent BAV and critical CoA underwent surgical treatment at our center from January 2000 to December 2016. Patients who required only an uncommitted two-stage procedure were excluded, thus all the patients recruited had severe valve dysfunction and critical CoA. The study population was then divided into two groups according to the procedure performed. The single-stage group comprised 8 patients, and the two-stage group comprised 12 patients.

All patients were diagnosed via transthoracic echocardiography (TTE) and computed tomography angiography (CTA) before the operation. A BAV was defined as complete fusion of two aortic valve cusps, and the type of BAV was characterized by the cusps involved in the fusion and conﬁrmed morphologically by the origin of the coronary arteries from which it arose. The types were then described as right and left fusion (RL), right and noncoronary fusion (RN), and left and noncoronary fusion (LN). Severe valve dysfunction was evaluated by TEE and defined as severe regurgitation (++++) or stenosis (aortic valve area <1 cm2). Critical CoA was defined as systolic pressure gradient more than 50 mmHg between arms and legs and was confirmed by both TTE and CTA.

The present study was approved by the ethics committee of Zhongshan Hospital Fudan University (B2016-142R) and all participants gave their informed consent.

The single-stage procedure commonly involved an extra-anatomic bypass from the ascending aorta to the distal aorta of the narrow segment and other surgical repairs for cardiac defects (mainly aortic valve dysfunction) through a median sternotomy (8,12,19,21). In most cases, the extra-anatomic bypass procedure was performed as soon as the cardiopulmonary bypass was initiated by cannulating the ascending aorta. A Dacron graft with a proper diameter (1.2 or 1.4 cm) was used, the size of the graft we chose depends on the diameter of the subclavian artery mainly in avoid of subclavian steal syndrome. The distal end of the graft was anastomosed to the thoracic descending aorta above the diaphragm through a left pleural incision with a running 4-0 polypropylene suture. The left pleural incision was usually made from the aortic arch to the diaphragm and at least one centimeter above the phrenic nerve to avoid nerve injury. After the proximal end was anastomosed to the ascending aorta, the aorta was cross-clamped at the proximal end of the anastomosis and cardioplegia was introduced; other cardiac defects were repaired on direct inspection. In other cases with aortopathy, an extra femoral artery cannula is needed in 3 patients to supply the descending aorta before the ascending aorta was replaced and the extra-anatomic bypass was performed. Postoperative CTA revealed good flow and perfect morphology of the bypass graft compared with a two-staged procedure (Figure 1). 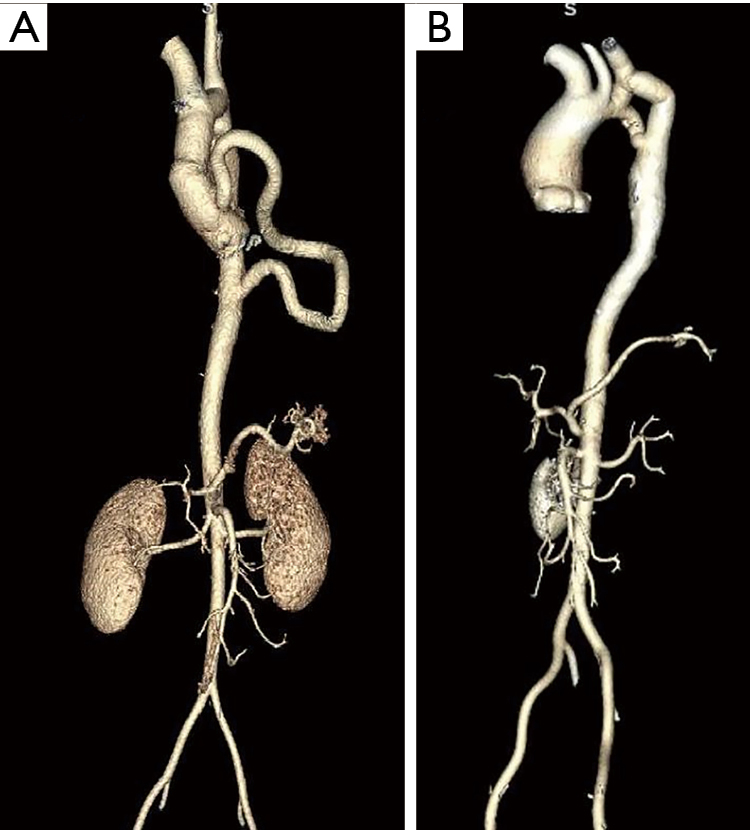 Figure 1 Postoperative (3 months) computed tomography angiography in single- (A) and two-stage (B) procedures.

In contrast, the two-stage procedure was usually performed as follows. A left thoracotomy was performed first to address the critical CoA either with an extra-anatomic bypass or patch enlargement of the coarctation, and then a committed two-stage procedure was performed through a median sternotomy to address any other cardiac defects. In our cases, an extra-anatomic bypass from left subclavian artery to the distal end of the narrow segment was mainly introduced to address the critical CoA, that’s because severe calcification was found in these narrow segments.

Continuous variables are expressed as mean ± standard error of the mean. Student’s t-test was used for comparison of continuous variables between the groups. Categorical variables are presented as number and were compared using Fisher’s exact test. Statistical analyses were performed with Stata 12.1 (Stata Corp., College Station, TX, USA). A P value of <0.05 was considered statistically signiﬁcant.

Of the 20 patients recruited in our study, only one was female. The preoperative characteristics of the two groups are summarized in Table 1. The mean age of all patients was 23.84±4.07 years (range, 16 to 30 years). A BAV with CoA occurred in 9 patients without other cardiac defects, and isolated aortic valve replacement with extra-anatomic bypass of the CoA was adequate treatment for these patients. Among the other 11 patients, the most common anomaly was dilatation of the aorta and aortic root (8/11); other malformations included a double-orifice mitral valve and regurgitation, atrial septal defect, ventricular septal defect, and tetralogy of Fallot. All patients with a BAV had severe aortic regurgitation, and most of them had a high frequency of RL cusp fusion (17/20) compared only 3/20 with RN cusp fusion and 0/20 with LN cusp fusion. Among all patients, the mean preoperative pressure gradient of the arms and legs was 82.95±14.10 mmHg, and TTE suggested a trend toward a low left ventricular ejection fraction and ventricular enlargement (P=0.007). However, no significant differences were observed in the baseline data or preoperative characteristics between the two groups, as shown in Table 1. 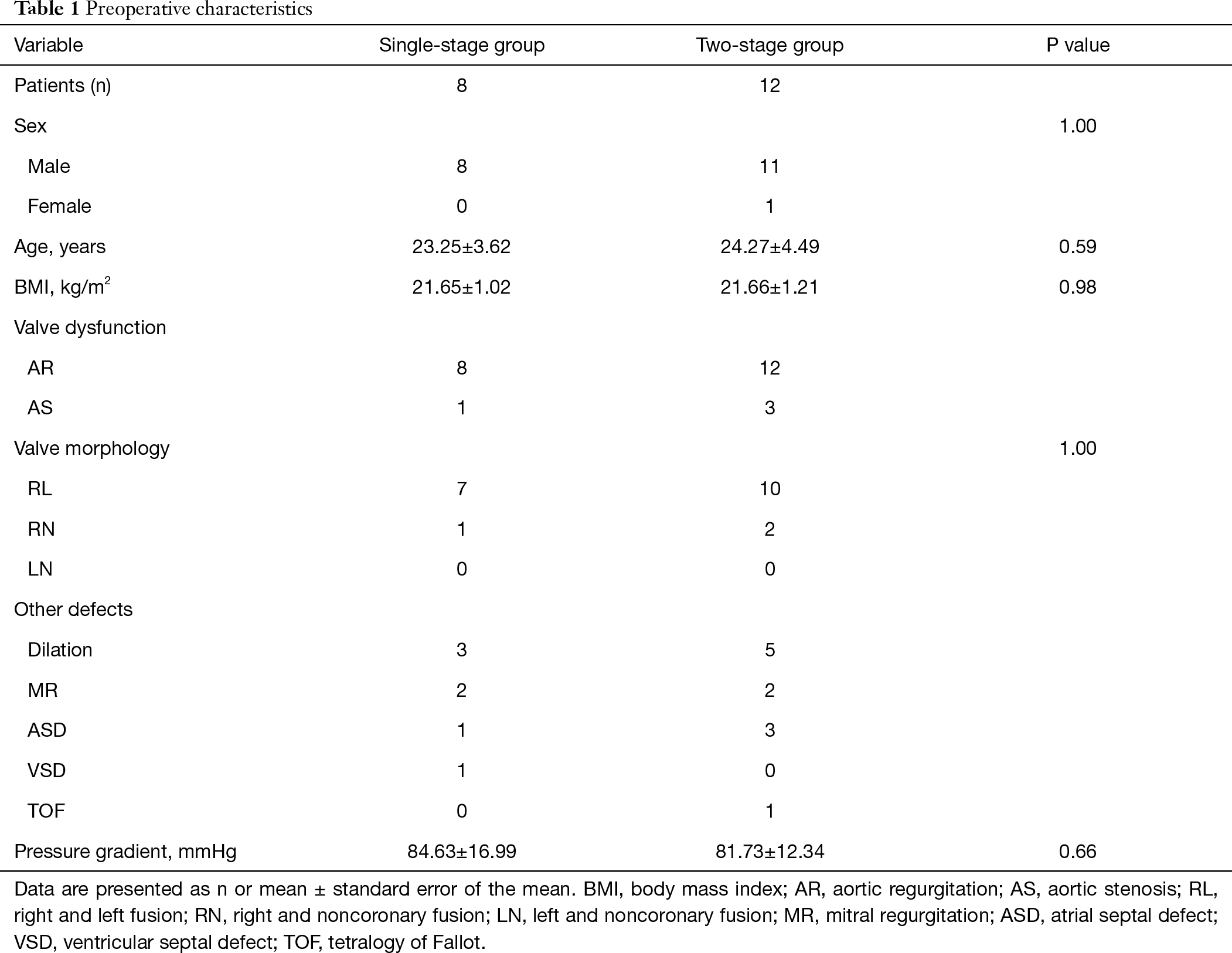 No patients died in this study (overall mortality rate of 0%). All patients in our study underwent mechanical aortic valve implantation and extra-anatomic bypass for CoA with a Dacron graft. Only 9 patients underwent an isolated procedure for a concurrent BAV and CoA, and most of these procedures involved concomitant operations. The mean dimension of the Dacron graft was 12.21±0.63 mm, and the mean postoperative pressure gradient of the arms and legs was 17.63±3.86 mmHg. All patients have a totally resolution of hypertension. No difference was found in the mortality rate, postoperative pressure gradient (P=0.64), use of implants (P=0.81), reoperation for bleeding, phrenic nerve injury, blood transfusion (P=1.00), or thromboembolic events between the two groups (Table 2). The perfusion time and cross-clamp time in the single-stage group seemed much longer (P=0.01 and P=0.04, respectively), but these times mainly depended on the complex cardiac defects involved. Three patients in the single-stage group and only 2 patients in the two-stage group underwent the Bentall or Wheat procedure. Additionally, patients in the single-stage group clearly sustained less surgical trauma and intensive care unit (ICU) stay hours (P<0.01) than those in the two-stage group. 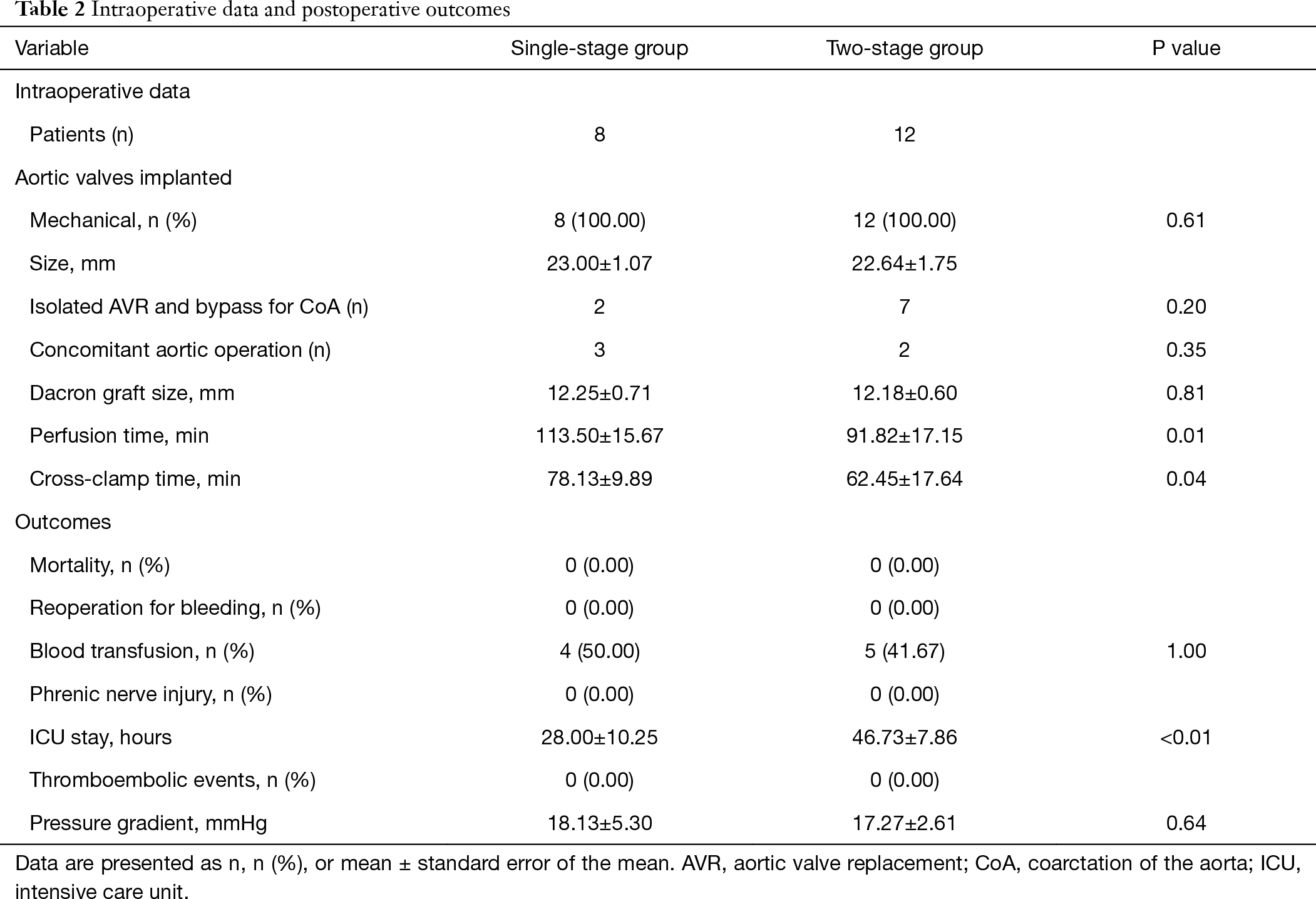 All patients in both groups underwent routine TTE and CTA examinations 3 months after the operation. CTA showed good flow and perfect morphology of the bypass graft in both groups. TTE revealed a good trend toward improvement in the ejection fraction and a decrease in the left ventricular dimensions (P=0.002); no significant difference was observed in the two groups.

A BAV with CoA is a rare but dangerous congenital cardiac malformation in the general population (1,2,5,20). However, a BAV with CoA has a higher incidence than an isolated BAV according to the literature (1,5,14-16), varying from 25% to 85%; these two conditions together with systemic hypertension are established risk factors for aortic dissection (1,17,18). Therefore, surgery is strongly recommended once the diagnosis is established. We retrospectively evaluated 20 patients who underwent different operative techniques in our center to identify the differences between these techniques.

Of these 20 patients, only 1 was female; this is consistent with the fact that a BAV shows a strong male predominance (1-3,20). Most of our patients had a greater frequency of RL cusp fusion (17/20), which is the most common type of fusion in patients with BAV (10,14,23-25) (as high as 74% in a previous report). A recent study of the detailed BAV morphology showed that the pattern of RL fusion is closely linked to left-sided obstructive cardiac lesions, especially CoA (1). Additionally, right-sided obstructive lesions such as tetralogy of Fallot were found in some of our patients. Further studies are needed to establish the relationships between the morphology of cusp fusion and coexisting congenital heart diseases in patients with a BAV.

Conventionally, surgical treatment of a BAV with CoA is often performed in two steps. Priority is often given to treatment of the critical CoA and collateral arteries through a left thoracotomy because of the high hemodynamic load and cardiac emergency risks associated with this condition. The choice of surgical techniques for CoA depends on evaluation of the lesion and surgeon’s experience. Patch repair of discrete coarctation has been seldom used since the great risk of late aneurysm formation. Instead, resection of the CoA segment and end-to-end anastomosis has been chosen in most cases. In our center, we prefer using a bypass graft to avoid the neurological complications such as laryngeal nerve palsy or spinal cord ischemia, since the lesion is often long and complex in patients of BAV with CoA. However, the new single-stage procedure reported for such patients provides us another choice (8,12,19,21). During this operation, routine cardiopulmonary bypass is initiated, and the extra-anatomic bypass from the ascending aorta to the descending aorta is ideally anastomosed first to supply the descending aorta before cardioplegia is delivered. For patients with aortopathy, an extra femoral artery cannula is needed to supply the descending aorta before the extra-anatomic bypass procedure was performed. In the present study, the single-stage procedure induced less surgical trauma and was as safe as the conventional two-stage procedure.

The choice of procedure is usually surgeon-dependent. Surgeons may prefer a two-stage procedure because it may be easier to expose the narrowed segment and descending aorta. However, the single-stage procedure through a median sternotomy can also provide a clear view when the heart and pericardium are retracted through a left pleural incision (5,8,12,19,21). Meanwhile, endovascular therapy (Balloon angioplasty or Stent implantation) is also a good choice for CoA patients. But the indication depends on the complex kinking of the aorta and histological changes of the aortic wall. Currently, endovascular therapy is the treatment of choice in children patients or older patients with multiple comorbidities (22).

All the patients in this study recovered uneventfully without any complication in our short follow-up duration. Resolution of hypertension has been observed in all patients although there is still a slightly residual arm-leg pressure gradient. However, there are some limitations of this study. Firstly, the long-term outcomes of these patients remain unclear. Many cases of CoA involve re-coarctation (23,26), and the long-term survival of the bypass graft remains unknown due to lack of follow-up. Secondly, all cases in this study were young patients and received mechanical valve implantation. However, valve repair should be considered in patients with primarily valvular insufficiency. More patients will be enrolled for valve repair in future study. Also, the surgical strategies are affected by the age of patients. The difference of clinical outcome between pediatric and adult patients also need to clarified in future studies.

Ethical Statement: The present study was approved by the ethics committee of Zhongshan Hospital Fudan University (B2016-142R) and all participants gave their informed consent.