Lung cancer remains the leading cause of cancer mortality in the world (1,2). Prevalence of lung cancer is extremely increasing in developing countries especially in China (2). With the help of chest computed tomography (CT) and some other techniques, more curable-stage lung cancers including a subset of stage III cancers are detected and they are well completely resected (3,4). It is well known that the seventh tumor, node, metastasis (TNM) staging system is widely used for staging and survival predicting based on T and M descriptors and in the nodal map (5). Although this system achieved satisfied accuracy in predicting survival outcomes, additional information, if added, can help increase the prediction performance of the model, especially in postoperative patients. So it is believed that there are some other independent prognostic factors such as patient-related and treatment-related factors which contribute to the individualized prediction of relapse and survival (6).

Nomograms have been widely developed in the majority of cancers for more individualized prognostic information of recurrence and survival outcome based on a combination of variables compared with traditional TNM staging system (7-10). They can also be used for predicting long-term survival outcome after surgery precisely (11). For resected non-small-cell lung cancer (NSCLC), a well-established nomogram can successfully provide an individual prediction of overall survival (OS) (11). For advanced NSCLC, nomogram can also help physicians to predict short-term survival before treatment and make optimal clinical decisions (10).

In this study, several clinical factors such as sex, age, smoke status, histology, and some tumor-related factors are selected and nomograms are developed for predicting the recurrence and survival of postoperative chemotherapy patients with resected IIIA NSCLC, in order to estimate the recurrence and survival of post-chemotherapy patients with resected IIIA NSCLC more precisely.

Patients’ relapse-free survival (RFS) was defined as the date of surgery to the date of relapse and patients’ OS is defined from the date of surgery to the date of death or last contact. Patients were regularly followed every 3 months during the first 3 years postoperatively, and every 6 months during 3 to 5 years postoperatively. Enhanced chest CT scan and abdominal ultrasonography were recommended for every clinic visit. Brain magnetic resonance imaging and bone scanning were recommended every 6 months. If tumor recurrence was suspected, pathologic confirmation was usually obtained. Patients whose tumor recurred in organs that were impossible to obtain biopsies were confirmed by the multidisciplinary tumor board, decisions were made mainly based on the dynamic changes in imaging or liquid biopsy.

Nomograms were developed by R 3.2.2 using “rms” package after analyzing the multivariable cox regression (13,14), and concordance index (C-index) was calculated to quantify the discrimination between outcomes and models (14-16). Values of C-index 0.5 and 1 indicate poor and perfect discriminative ability, respectively (16). Next, calibration curves were performed including 3-year and 5-year of RFS and OS, to identify the difference between predicted model and observed data (17). Finally, we tried to conduct risk stratification according to risk scores calculated by nomograms of RFS and OS. Risk stratifications were presented by Kaplan-Meier survival curves and Log-rank test (11).

Clinicopathological characteristics and survival of the patients

According to the multivariable analyses, all the independent prognostic factors related to RFS and OS were included in building two nomograms, respectively. It was obvious that tumor size made a huge contribution to the prognosis not only in recurrence but also in OS. In nomogram of RFS (Figure 1), N2p showed much more significant influence than N1p. Post radiotherapy and post targeted therapy showed a moderate impact on prognosis. While both tumor size and N2p shared great contribution to prognosis in the nomogram of OS (Figure 2). 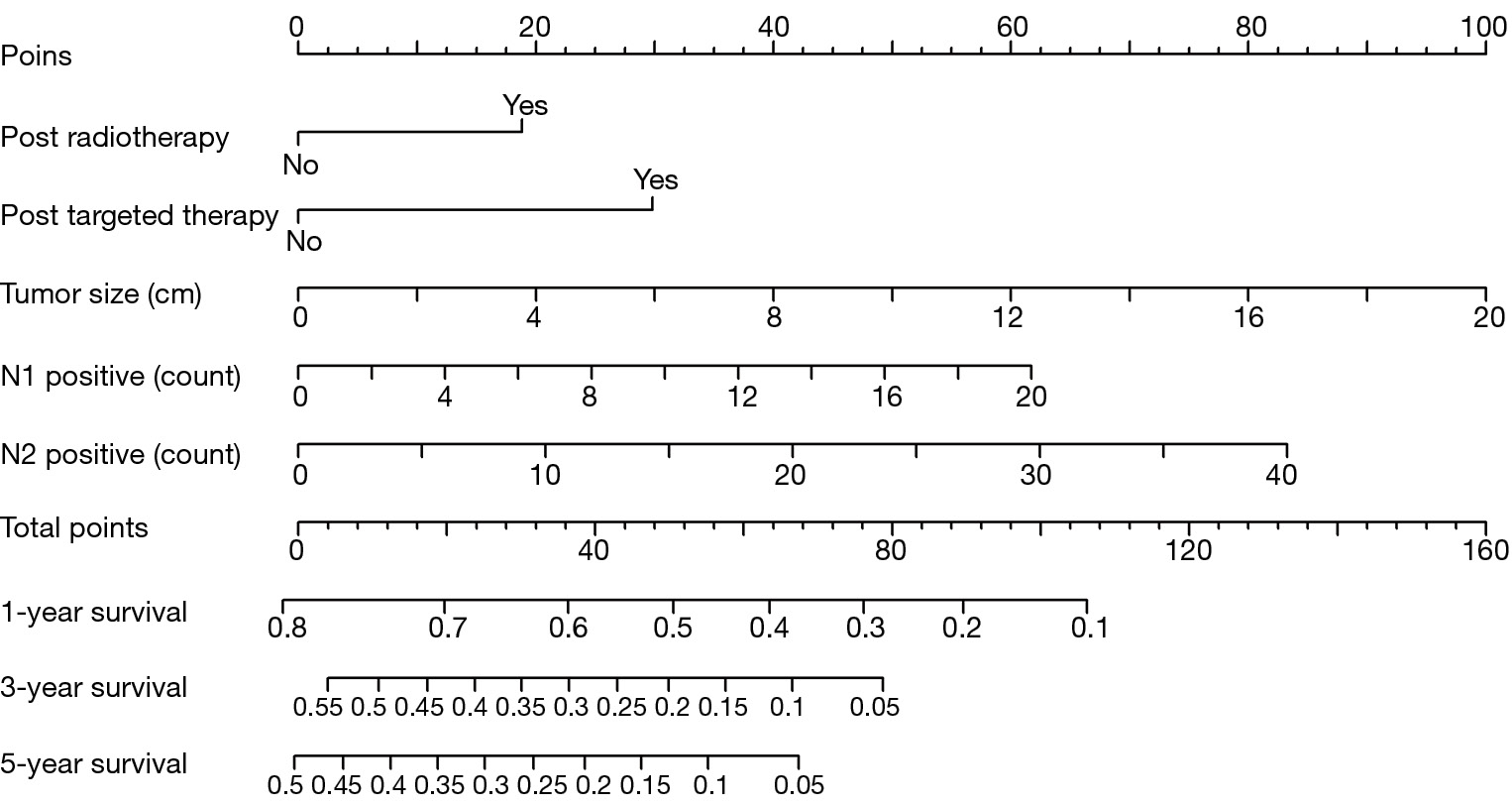 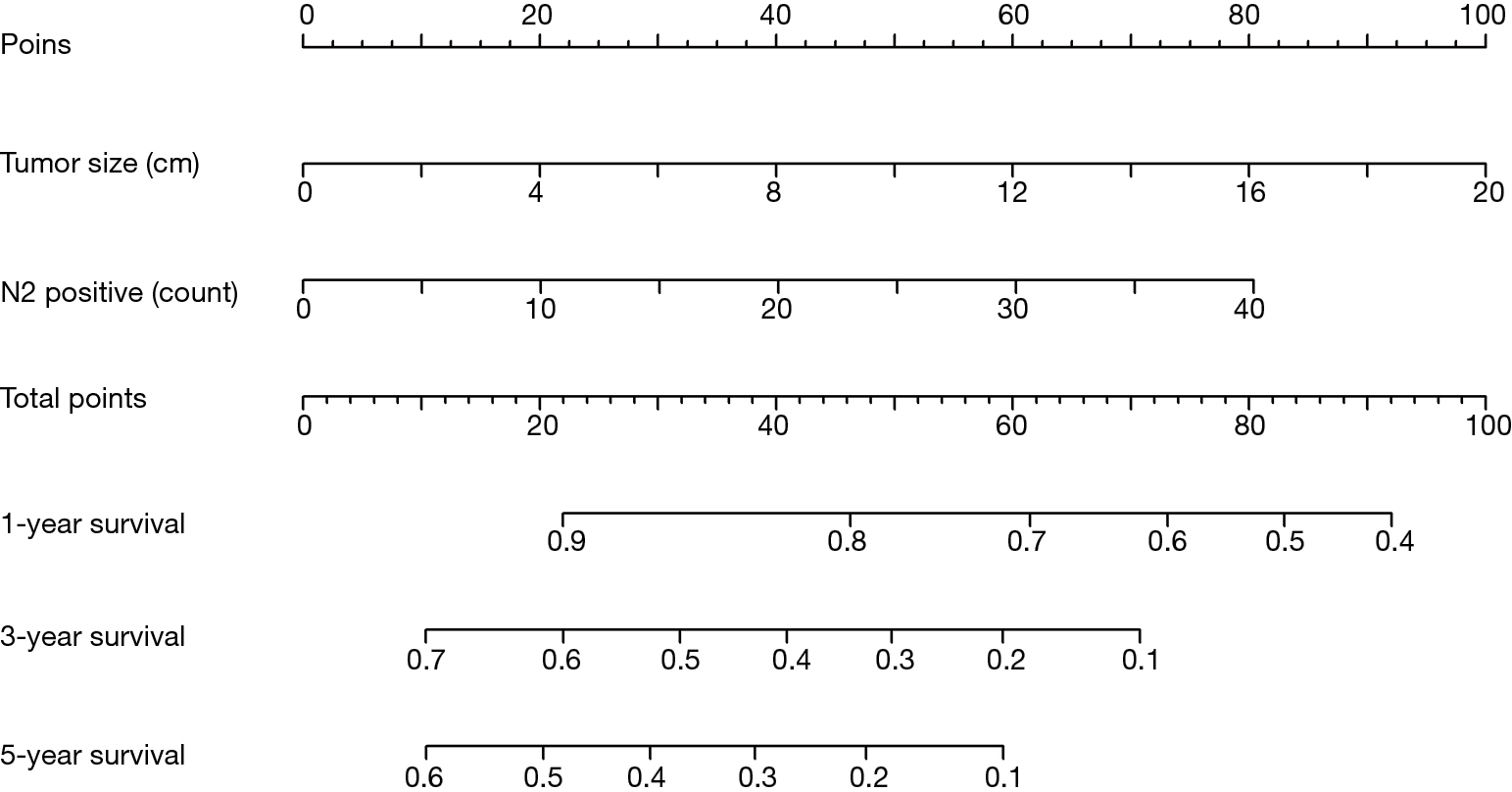 Validation and calibration for nomogram

For example, a 70-year-old male patient, he was pathologically diagnosed as IIIa lung adenocarcinoma after surgery. According to his pathology report, his tumor size was 3.2 cm. There were two positive lymph nodes in N1 group and four in N2 group. He then received post chemotherapy and post targeted therapy. Therefore his RFS score was 60.43 and his OS score was 24. To predict his 5-year relapse free survival probability, we firstly identify the point of 60.43 in the “total points” scale in nomogram of RFS. Then we draw a line perpendicular to this scale down until it meets the “5-year survival” scale. The cross point is approximate 0.09, which means the probability of this patient living free from relapse for 5 years is about 9%.

Risk group stratification based on nomogram

We first calculated the risk score for every patient according to nomogram. Then we sorted all patients from small risk scores to large ones. Finally, we divided these sorted patients into three equal parts, named low risk group, median risk group and high risk group. Kaplan-Meier survival curves of RFS and OS were delineated (Figure 4 and Figure S2). It was obvious that different groups have distinct prognoses. Risk score could effectively predict the outcome. 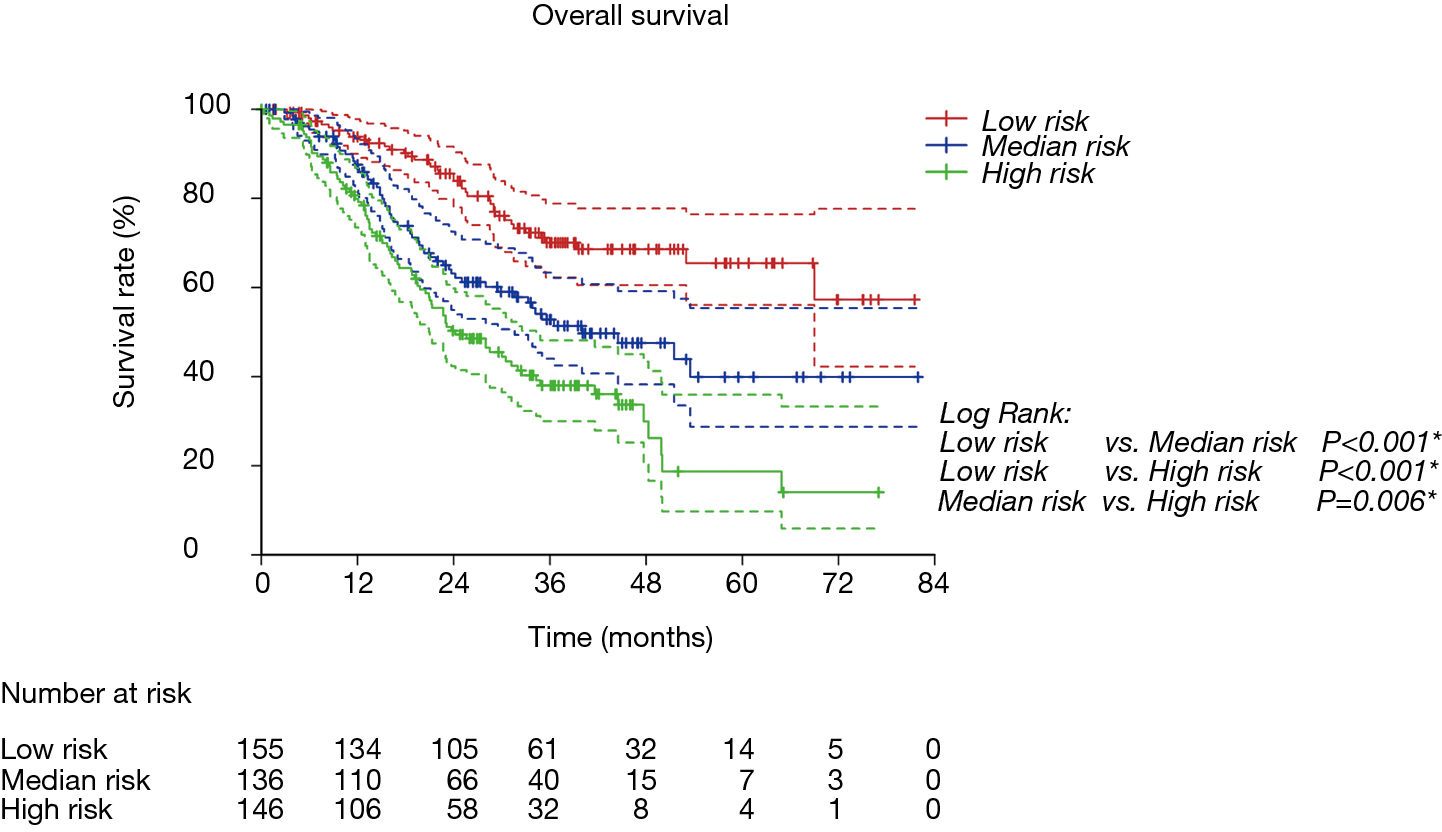 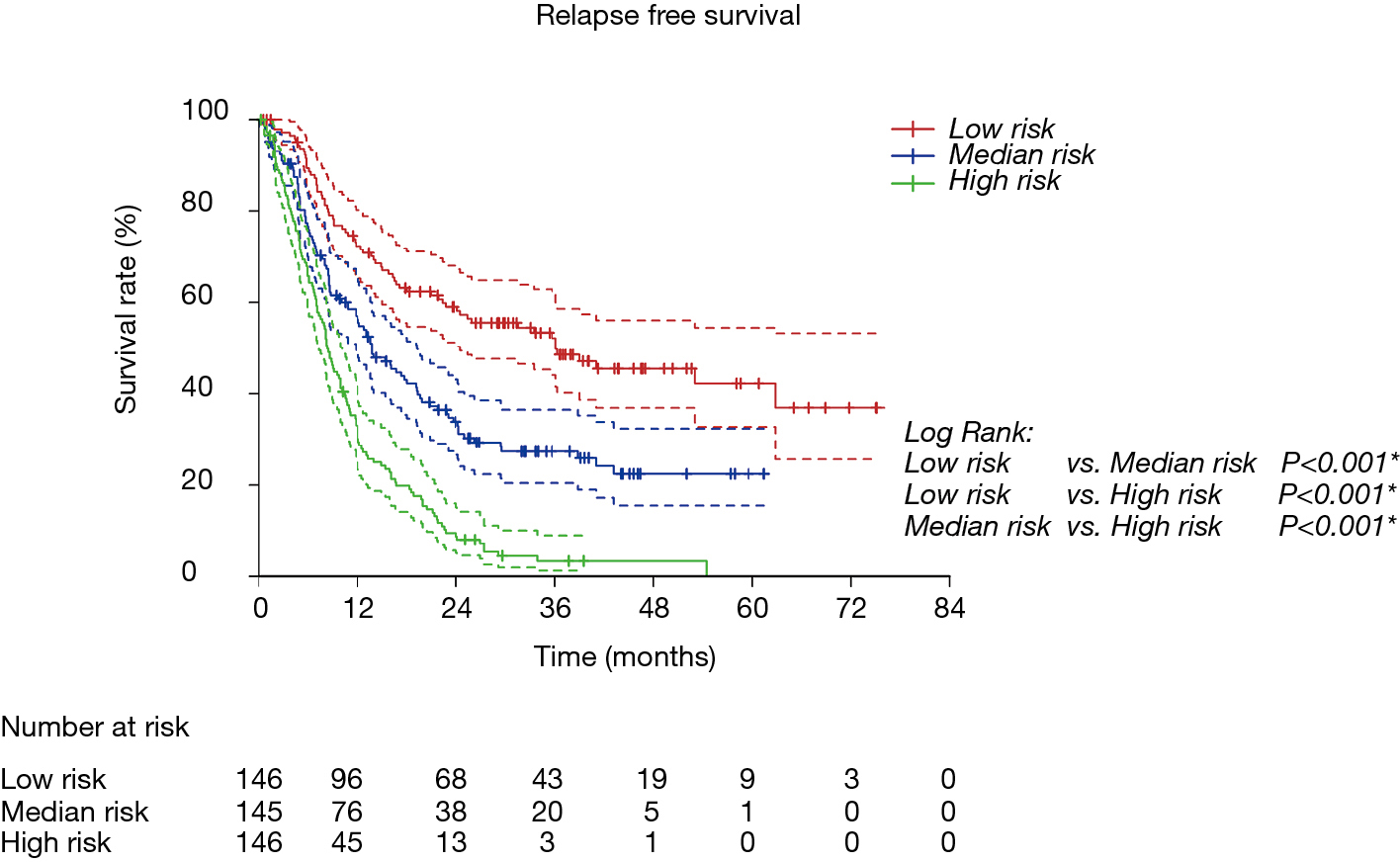 Though TNM classification still remains the predominant and powerful indication to the prognosis of NSCLC (18), there are some other prognostic factors such as performance status, sex, age, as well as histology cell type playing an important role in survival prediction (19). And with respect to stage I to stage IIIA NSCLC after surgical treatment, it still holds several prognostic factors in addition to TNM staging (18,20). In recent years, several predicting models have been created for NSCLC (10,21), even for postoperative NSCLC (11). Nomograms have been successfully applied to early-stage and advanced patients, chemo-naive patients, and TKI-treatment patients. Both PFS and OS can be precisely predicted. The emerging nomograms reflect the insufficient of current treatment based on TNM staging system, and the desire of clinicians for individualized treatment of lung cancer. However, predicting model for resected IIIA patients with post-chemotherapy is still scarce. Therefore we tried to develop the nomograms for predicting the recurrence and survival of post-chemotherapy with resected IIIA NSCLC.

After univariable and multivariable analyses, five independent prognostic factors related to relapse free survival and two independent prognostic factors related to OS were selected. And nomograms for RFS and OS were developed. In the nomogram of RFS, tumor size was the predominant factor associated with recurrence, the greater the tumor size was, the higher the risk score was. The count of the positive lymph nodes in N2 group was more important than that in N1 group. Post targeted therapy and post radiotherapy showed a moderate influence in RFS. Several RCTs such as V-15-3 trial (22), BR 19 trial (23) and RADIANT trial (24), showed that there was no survival benefit from postoperative targeted therapy and there was even detriment for those mutation-unselected patients. In our study, however, we found that post targeted therapy might contribute to early recurrence. Post radiotherapy also seemed detrimental to RFS in our study, which was conflicted with recent studies for advocating postoperative radiotherapy in resected pN2 NSCLC (25,26). The contradiction mainly resulted from different endpoints. We used relapse free survival in our study while those studies focused on OS. Furthermore, N stage for post-radiotherapy in our study was not stratified since most of the patients were N2 disease, which might also contribute to a different conclusion. In the nomogram of OS, neither post radiotherapy nor post targeted therapy contributed to prognosis. Only tumor size and count of the positive lymph nodes in N2 group could independently predict outcomes. Our data demonstrated that only tumor-related factors affected patients’ OS. Adjuvant treatments could affect the recurrence, the impact was limited. Radiotherapy or targeted therapy has been proven efficient in advanced NSCLC. However, in resected stage IIIA patients, in view of the intrinsic heterogeneity of this population, the effectiveness of these treatments is yet to be verified in clinical trials.

Validation of nomograms were performed, and C-index was 0.656 (95% CI: 0.626–0.687) for RFS and 0.651 (95% CI: 0.611–0.691) for OS, respectively. These results indicated a moderate concordance between the predicting and actual RFS and OS. We could also found the moderate concordance in calibration curves of RFS and OS (Figure 3 and Figure S1). Furthermore, we made risk stratification according to risk scores calculated by nomograms. Subgroups were delineated through Kaplan-Meier survival curves, with significant p values in different groups for RFS and OS (Figure 4 and Figure S2). So, the risk groups stratified by different risk scores were able to indicate different recurrence and survival outcomes. This method could make doctors easier to estimate the prognosis of post-chemotherapy patients with resected IIIA NSCLC and decide different and optimal clinical decisions.

It was also notable that what the clinical stage was of these patients in our study before surgery. In our hospital, every patient received preoperative tests including chest CT scan/chest X-ray, brain MRI, abdominal CT or ultrasonography, radionuclide bone scan/PET-CT and bronchoscopy to assess clinical stage. For patients suspicious of mediastinal lymph node metastasis, EBUS-TBNA or other invasive examination was performed. Patients whose tumors were considered initially resectable were selected for surgery according to our treatment strategy (12). These patients were either in cN0–1/pN2 or minimal N2 status by imaging evaluation preoperatively. We routinely performed lobectomy and mediastinal lymph node dissection as a standard operation. Only in patients with negative CT scan findings and positive pathological findings in mediastinal lymph node, their clinical stages and pathological stages were inconsistent.

Still, there were several limitations and deficiencies in our study. First, it was a retrospective analysis of a limited number of patients. Second, some of the potential parameters such as vascular invasion, subgroups of N2, were not analyzed in our study (27). Third, lack of external validation was the major limitation to our nomograms. Fourth, Patients included in our analyses started from 2007. Great changes occurred in treatment pattern in recent years. Treatment strategy which was optimal ten years ago might not remain optimal at present. For example, the current immunotherapy which had significant therapeutic effects was not included in our study. And this inevitably influenced the conclusion of our study. Further great efforts on precise follow-ups, careful statistical analyses were needed to make better improvement of our models.

Ethical Statement: The study was approved by the Institutional Review Board of the Fudan University Shanghai Cancer Center (No. 090977-1) and written informed consent was obtained from all patients.