Asthma is a chronic inflammatory airway disease characterised by variable respiratory symptoms, such as cough, wheeze, dyspnoea, and chest discomfort, in addition to variable expiratory airflow limitation (1). The socioeconomic burden of asthma has become so substantial that it is now considered a major public health issue (2). In the US, around 26 million asthma patients are treated annually, at a cost of $50 billion (3). Consequently, there has been worldwide effort to improve asthma management; however, asthma care quality has been unsatisfactory in several aspects of diagnosis, assessment, and treatment (4-6).

A pulmonary function test (PFT) is one of the best methods for diagnosis and assessment of asthma (1). Global Initiative for Asthma guidelines recommend that a PFT be performed at diagnosis or initiation of treatment, 3–6 months after starting asthma control treatment, and periodically as treatment continues. This process is important to assess asthma control status and evaluate the risk of asthma exacerbation. However, many researchers have reported that the PFT performance rate is considerably lower than would be expected if guidelines were followed, although specific rates vary among studies (4,7,8). Underutilization of PFTs may be caused by several factors, including a lack of equipment at health care facilities, indifference of doctors, and low compliance in some asthma patients. Further studies are required to understand the current status of PFT performance in a real-world context.

In the Republic of Korea, almost the entire population has health insurance through National Health Insurance (NHI), National Medical Aid (NMA), or Korea Veterans Health Service (KVHS) (9). When healthcare centres file claims for medical expenses, insurance reimbursement is approved by the Health Insurance Review and Assessment Service (HIRA), which assesses the quality of the medical practice. HIRA collects patient clinical data through insurance claims for several purposes, including healthcare big data analysis. Using this database, we can assess current PFT performance status in almost every asthma patient who visited a healthcare clinic in the Republic of Korea during the study period.

We analysed a nationwide HIRA quality assessment database to investigate the current status of PFT performance in the Republic of Korea. Quality assessment was performed for medical institutions that treated more than nine asthma patients within a year. We extracted medical information of asthma patients from July 2013 to June 2014. This information included age, gender, medical institution, International Statistical Classification of Diseases and Related Health Problems, 10th revision (ICD-10) codes, PFT performance, and possession of PFT equipment. Patient inclusion criteria were (I) age >15 years; (II) primary or first secondary diagnosis of asthma by ICD-10 code; and (III) either prescription of asthma medication (corticosteroids, leukotriene receptor antagonists, long acting β2-agonists, short acting β2-agonists, anticholinergics, or xanthine derivatives) from an outpatient clinic more than once per year, or evidence in patient’s admission history of asthma medication having been prescribed previously. Patients with an ICD-10 code that forbids PFT performance per guidelines, such as dementia or various forms of paralysis, were excluded.

The PFT performance rate was defined as the ratio of the number of asthma patients who received a PFT to the number of asthma patients enrolled in this study during a one-year period (from July 2013 to June 2014). PFT types included spirometry with/without flow-volume curve, cardiopulmonary exercise test, peak expiratory flow rate test, and the bronchial provocation test.

Possession rates of PFT equipment were assessed by type of medical institution. Performance rates of each type of PFT were also evaluated.

This study was approved by the ethics committee of Seoul St. Mary’s Hospital (KIRB-0E482-001). The requirement for informed consent from the patients was waived due to the retrospective nature of this study and anonymity of the data.

Chi-square or Fisher’s exact tests were used to compare PFT performance rates according to sex, age, and insurance type. The Mantel-Haenszel chi-squared test was used to analyse correlations between PFT rate and type of insurance or age group. A P value <0.05 was considered statistically significant for all analyses. Statistical analyses were conducted using SAS 9.2 software (SAS Institute, Cary, NC, USA). 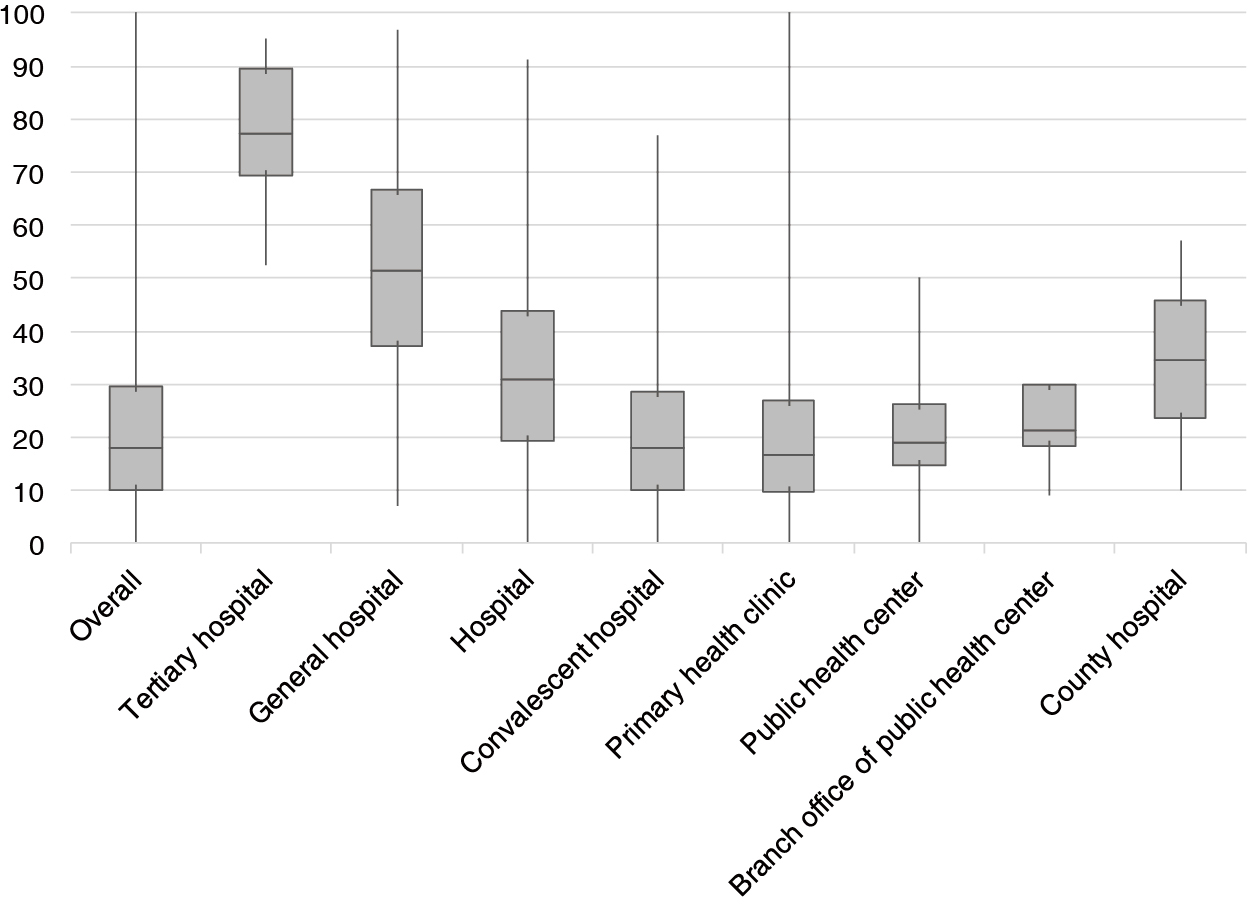 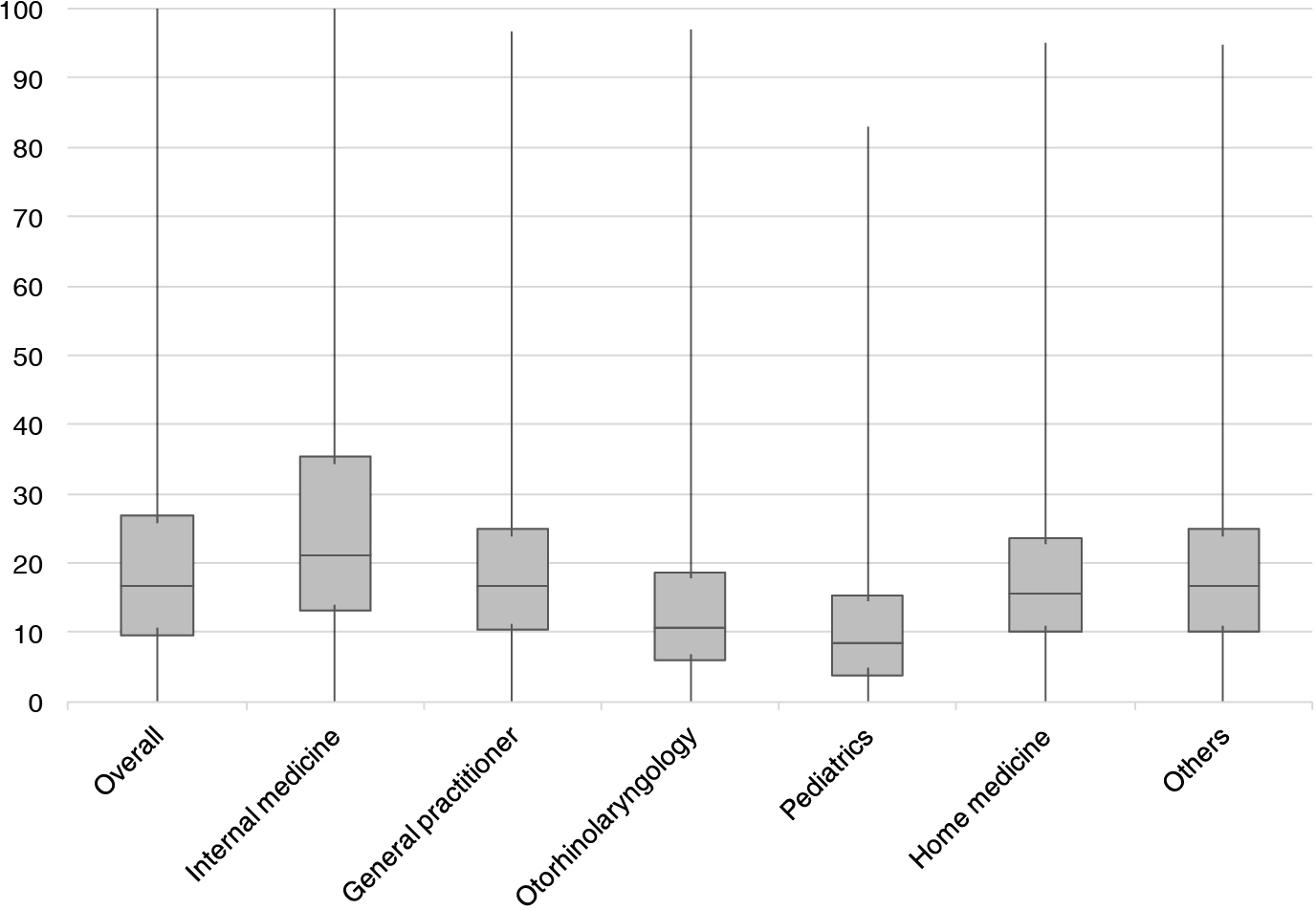 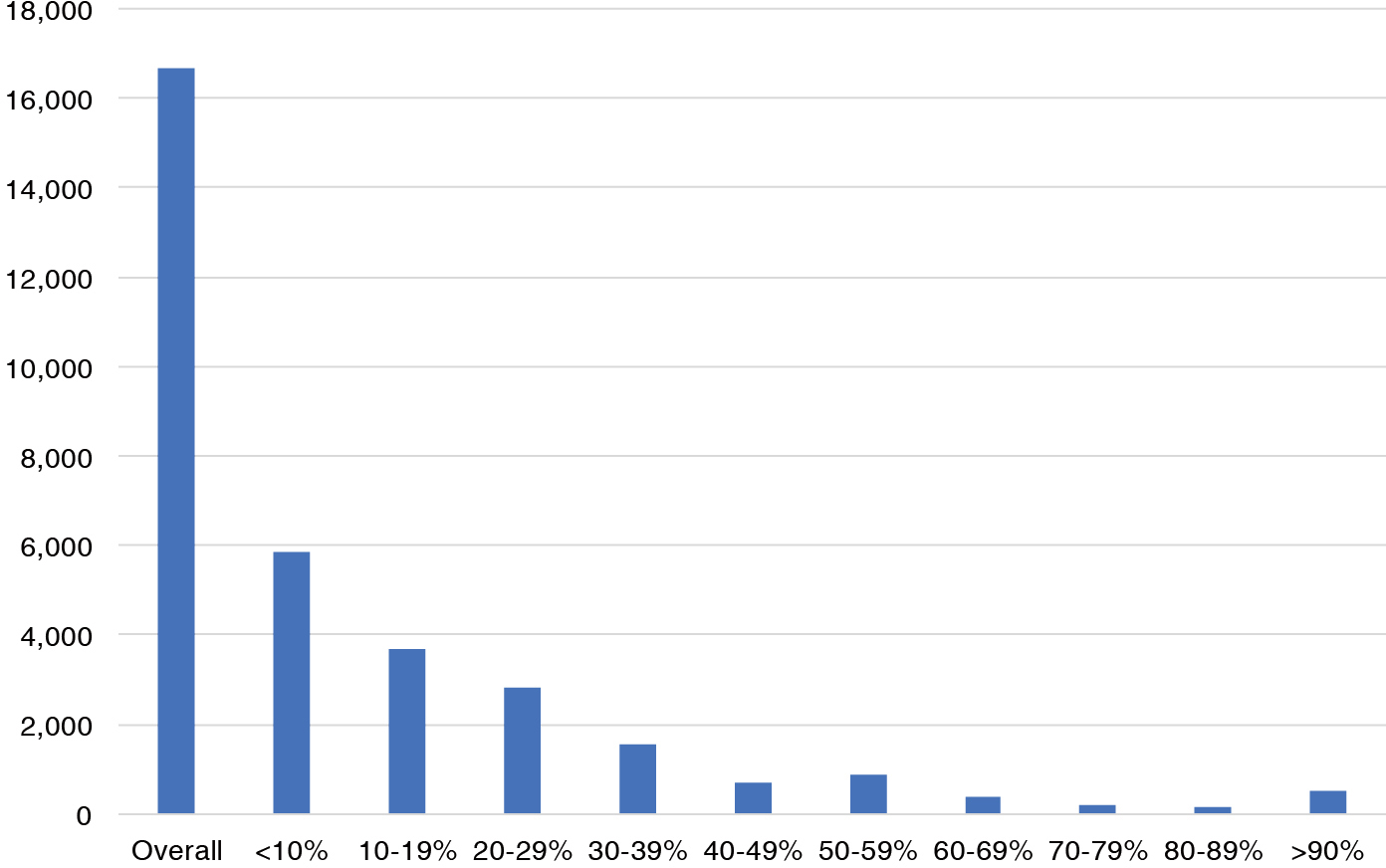 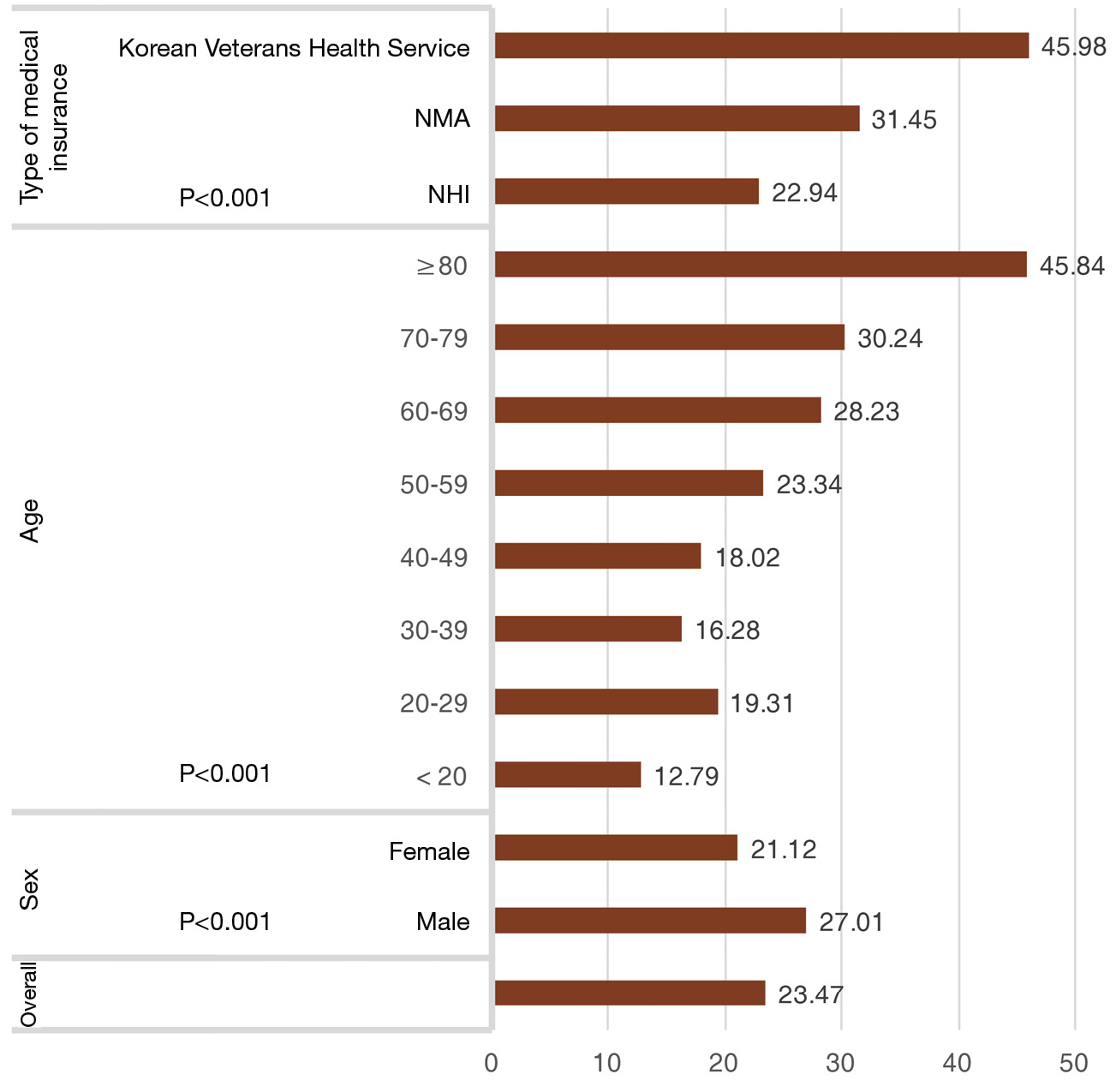 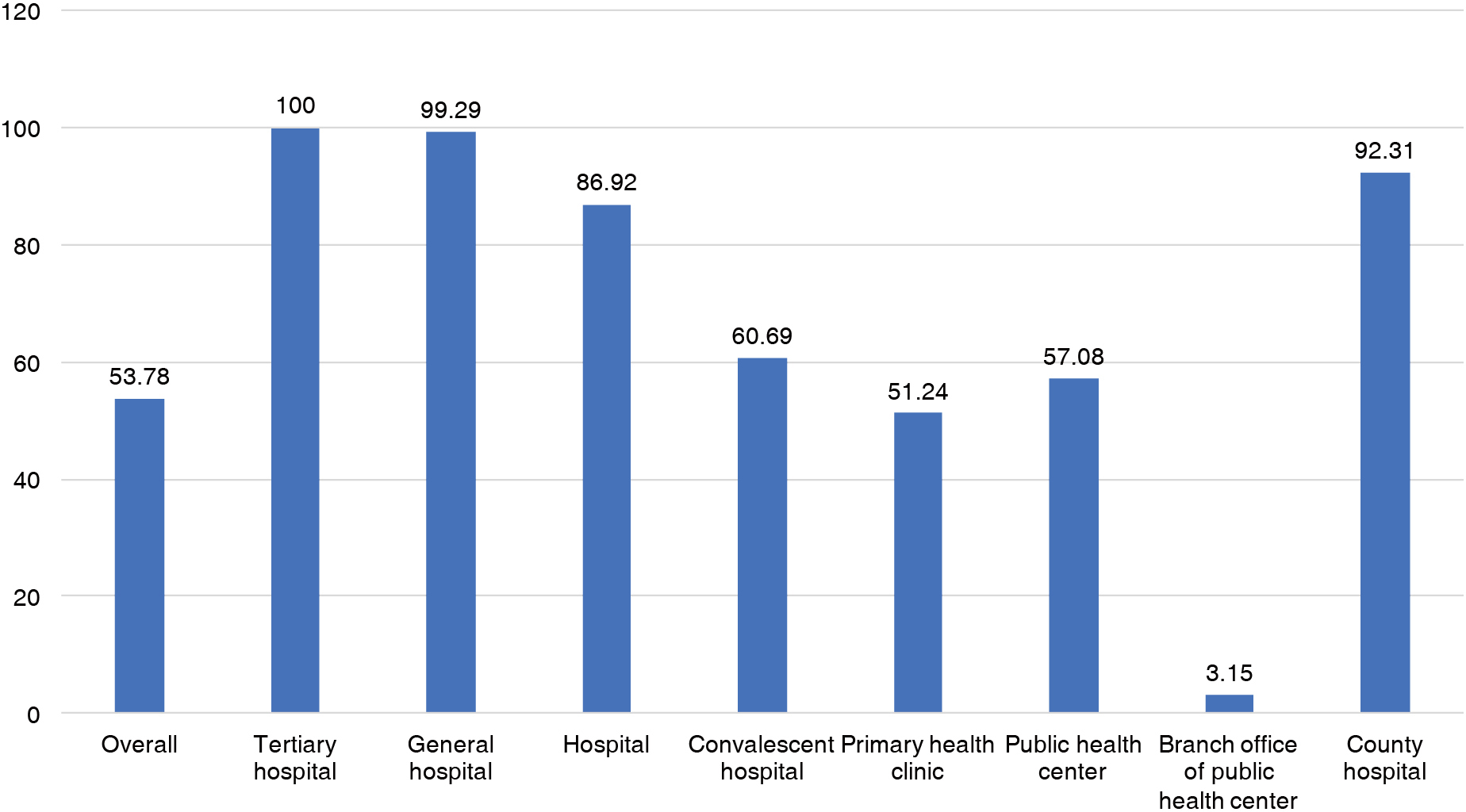 The analysis of performance rate by PFT type showed that the spirometry with flow-volume curve test was performed in the highest number of patients (n=152,639), followed by the bronchial provocation test (airway reversibility) (n=72,486) (Figure 6). Only 8,396 patients received a peak expiratory flowmeter test, and just 367 received a cardiopulmonary exercise test. 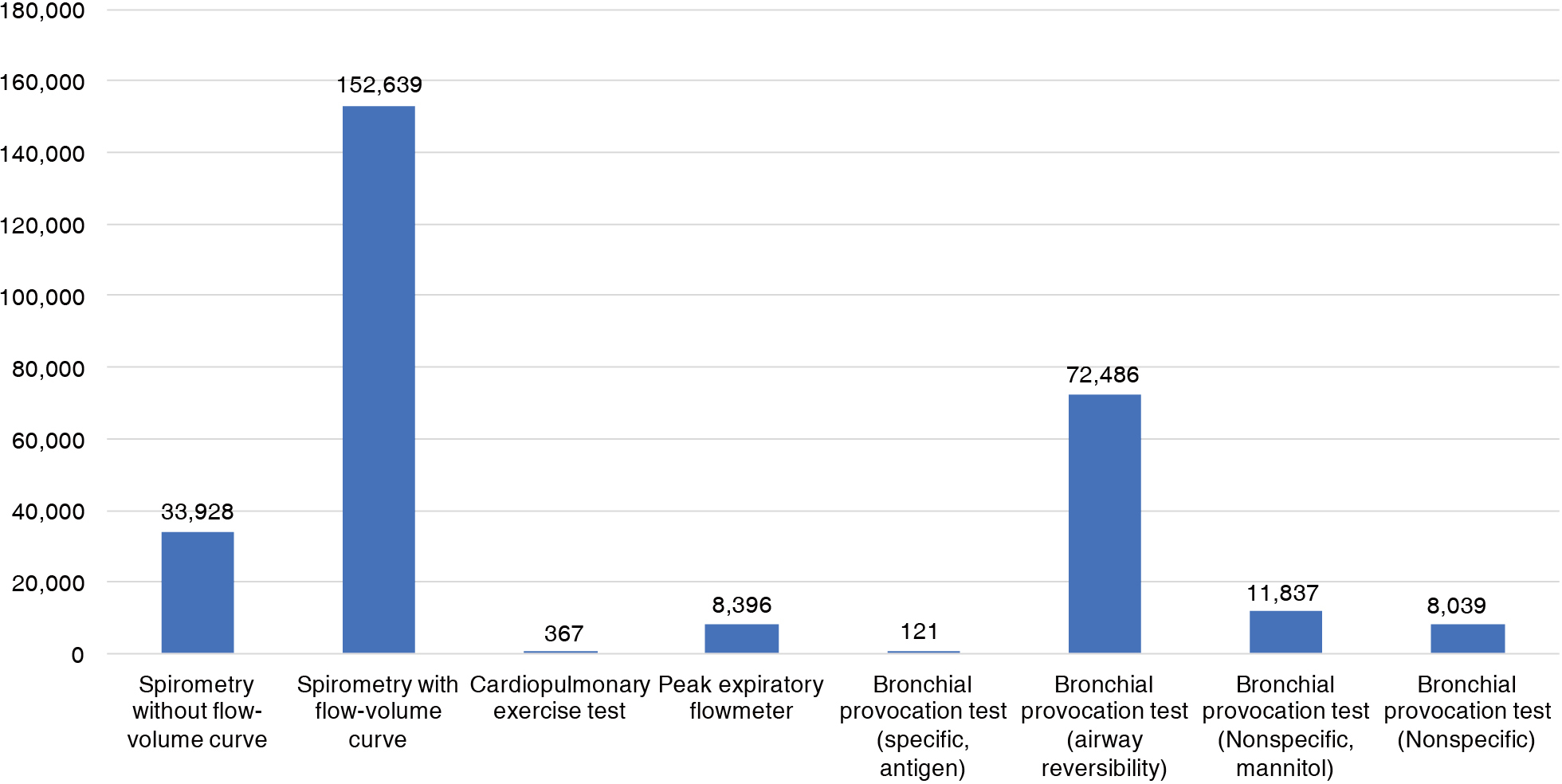 Previous studies have continuously reported underutilization of PFTs. In an analysis of Sweden’s Skaraborg Primary Care Database (SPCD) covering 2000–2005, only 20% of asthma patients in primary care were reported to have received spirometry at diagnosis, and 38% received it at follow-up (10). A Canadian study utilizing the Ontario Asthma Surveillance Information System (OASIS) database covering 1997–2007 found that only 42.7% of 465,866 asthma patients (95% CI, 42.6–42.9%) received a PFT during the peri-diagnostic period (11). Another population-based study from Germany reported that 54.1% (95% CI, 50.2–58.0%) of patients with asthma received a PFT in 2010 (4). Although previous studies have reported lower than expected rates of PFT performance, our results were even lower, which may be due to ignorance of the guidelines at primary health clinics. Also, some doctors, especially non-specialists, may not have been well-trained to utilize PFT equipment. Therefore, further training system is needed.

The importance of primary health care has been emphasized in past decades. It is well known that improvement of primary health care quality leads to a decrease in hospitalizations for ambulatory care sensitive conditions (ACSC), including asthma (12,13). In the German study, asthma patients in primary health care were voluntarily enrolled in a German national asthma disease management program (DMP), which regulates asthma care quality (4). Patients enrolled in the DMP saw significant improvements in asthma care, including attention to smoking cessation, inhalation techniques, asthma management plans, and PFT performance. In Sweden, primary health care centres have been using Asthma and COPD Nurse Practitioners (ACNPs) to improve management of asthma and COPD patients (14). In this practice, specially trained nurses examine lung function and maintain patient follow-up. Patients who were visited by ACNPs had overwhelmingly higher PFT performance rates (98% vs. 5%) and smoking habits documentation (78% vs. 28%) compared to patients visited by general practitioners.

In our study, male and elderly patients tended to receive PFTs more frequently. The discrepancy of PFT performance rate between different sex and age groups may have been affected by several factors. As patient factors, willingness to spend time for additional diagnostic procedures, or self-awareness of disease characteristics may have encouraged older patients to receive PFT after recommendation of doctors (15). Also, clinicians may have been more cautious in elderly patients with symptoms of dyspnea, compared to younger patients. Doctors may have used PFT more in elderly patients to differentiate other conditions such as chronic obstructive pulmonary disease (COPD). Finally, our study design may have affected these differences. We included asthma patients in our study by doctor-reported diagnostic codes. As a result, there are some possibilities that patients with ACO (asthma COPD overlap) may have been included in our patient group. As PFT is indispensable in diagnosis of COPD, this may explain the reason of high PFT performance rate in elderly and male patients (16).

The greatest strength of this study is the large number of patients and institutions involved; it covered nearly every asthma patient in South Korea. This study showed the underutilization of PFTs in real-world terms, especially in primary health care. However, there are some limitations to this study. First, the study was designed as an observational, retrospective study, which may create several biases. Second, this study only includes 1 year of data. Analysis of long-term databases should be done in further studies.

This study was supported by HIRA (Join Project on Quality Assessment Research).

Ethical Statement: This study was approved by the ethics committee of Seoul St. Mary’s Hospital (KIRB-0E482-001). The requirement for informed consent from the patients was waived due to the retrospective nature of this study and anonymity of the data.