Lung cancer, as a leading cause of cancer-related deaths worldwide, has been one of the most health-threatening and death-causing diseases to humans with the morbidity and mortality rate ranking first in China (1-5). Among various therapeutic methods aiming at curing the disease, surgery is still the primary or optimal strategy, especially for intermediate-stage patients with pre-malignant or early lesions which are amenably resectable (6). Postoperative pulmonary complications (PPCs) are deemed to be strongly correlated to short- and long-term survival after lung cancer surgery (5,7,8). Hence, the preoperative state of candidates waiting for lung cancer surgery and predictive risks for PPCs with up-to-date data is urgently needed to be investigated, helping to set realistic expectations for perioperative interventions, therapies and care.

Resent years, some predictive factors of PPCs after lung resection, for example, forced expiratory volume in 1 s (FEV1) or 6-min walk distance (6-MWD), have been deeply investigated, aiming at better assessing the risk of PPCs preoperatively (8-15). peptide level peak expiratory flow (PEF), which is defined as the maximum flow achieved during expiration delivered with maximal force starting from maximal lung inflation, has been investigated as a risk assessment tool aiming at old populations. Recent years several researches have been performed to investigate associations of PEF with long-term cause-specific mortality, for it has cross-sectionally associations with health status as well as physical and cognitive function (16-20). However, few researches were conducted to validate the effectiveness of PEF to predict the occurrence of PPCs after lung cancer lobectomy.

Based on this, we set this prospective study to examine the correlation between PEF and clinical variables in lung cancer patients undergoing lung lobectomy.

This protocol has been approved by the university’s clinical trials and biomedical ethics committee (No. 2016-121). The WHO registering number is ChiCTR-COC-17010720. We declared that the research was adhered the tenets of the Declaration of Helsinki, with written informed consent obtained from the patients.

Records of consecutive patients who diagnosed with non-small cell lung cancer (NSCLC) undergoing lung cancer lobectomy at West China Hospital of Sichuan University, between March 1st, 2017 and December 31th, 2017 were involved. Inclusive criteria were listed as follow: (I) diagnosed as NSCLC; (II) undergoing lung cancer lobectomy; (III) age between 40–85 years; (IV) with agreement of informed consent. Finally, data of 725 patients were finally included and analyzed. All patients were received similar routine perioperative preparation or care, including early mobilization, ambulation and breathing exercise by the specialized nurses. The pathological stage was determined based on the eighth edition of the TNM staging system for lung cancer (21,22). Preoperative pulmonary functions, including forced vital capacity (FVC), FEV1 and PEF, were routinely measured at the lung function laboratory of the hospital before the operation.

Based on the STS/ESTS complication definition (23), categories and criteria of the PPCs experienced by the patients were as follows: (I) atelectasis documented clinically or radiographically; (II) pneumonia defined according to the criteria including: new or progressive and persistent infiltrate, consolidation or cavitation found by chest radiographs and at least one of the following must be met: fever (>38 °C) without other recognized reasons; leukopenia (<4,000 WBC/mm3) or leukocytosis (<12,000 WBC/mm3); for patients >70 years old, change in mental status with: purulent sputum or change in character, respiratory secretions increasing or needing suction; onset or worsening symptoms (dyspnea, tachypnea, e.g.,) or clinical signs (rales, bronchial breath sounds, e.g.,); (III) adult respiratory distress syndrome (ARDS); (IV) mechanical ventilation >48 h; (V) air leak >7 days; (VI) reintubation; (VII) back to ICU or needing tracheotomy; (VIII) empyema; (IX) chylothorax/bronchopleural fistula.

Continuous variables were presented as the means ± standard deviations (SD) and binary variables as proportions (n, %). Fisher’s exact test, Chi square test, and Student’s t-test were used for comparing variables as appropriate. Univariate and multivariate logistic regression analyses were performed, aiming to investigate potential predictive factors of PPCs and evaluate the predictive significance of PEF value for PPCs. Variables with a P<0.20 in the univariate analysis were involved into the multivariate analysis along with the PEF. A receiver operating characteristic (ROC) curve was performed to evaluate the sensitivity and specificity of PEF value for predicting the occurrence of PPCs in lung cancer patients after lung cancer lobectomy. All results were determined significant at a value of P<0.05. Statistical analyses were conducted via SPSS software v.22.0.

Baseline of the patients’ characteristics 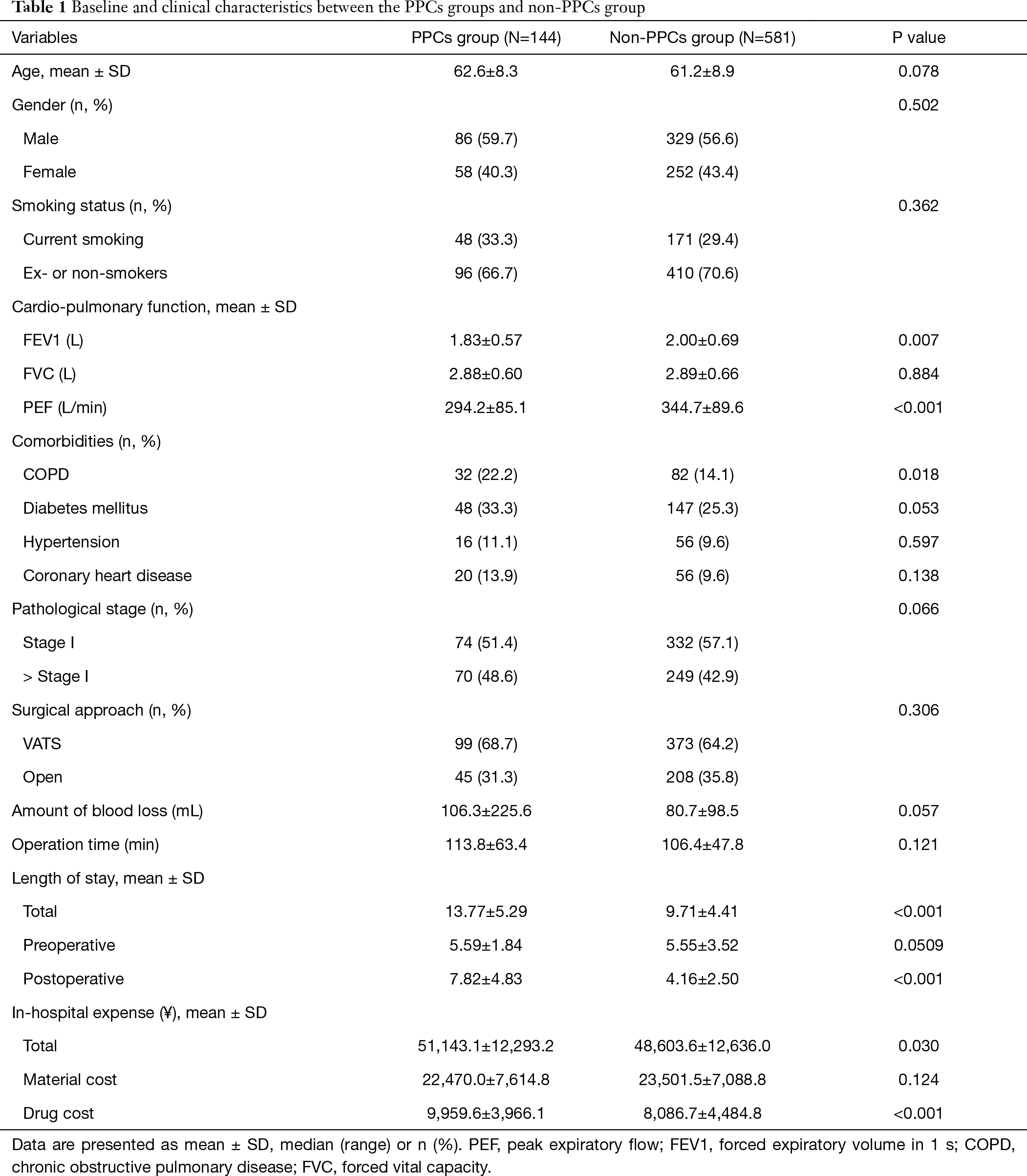 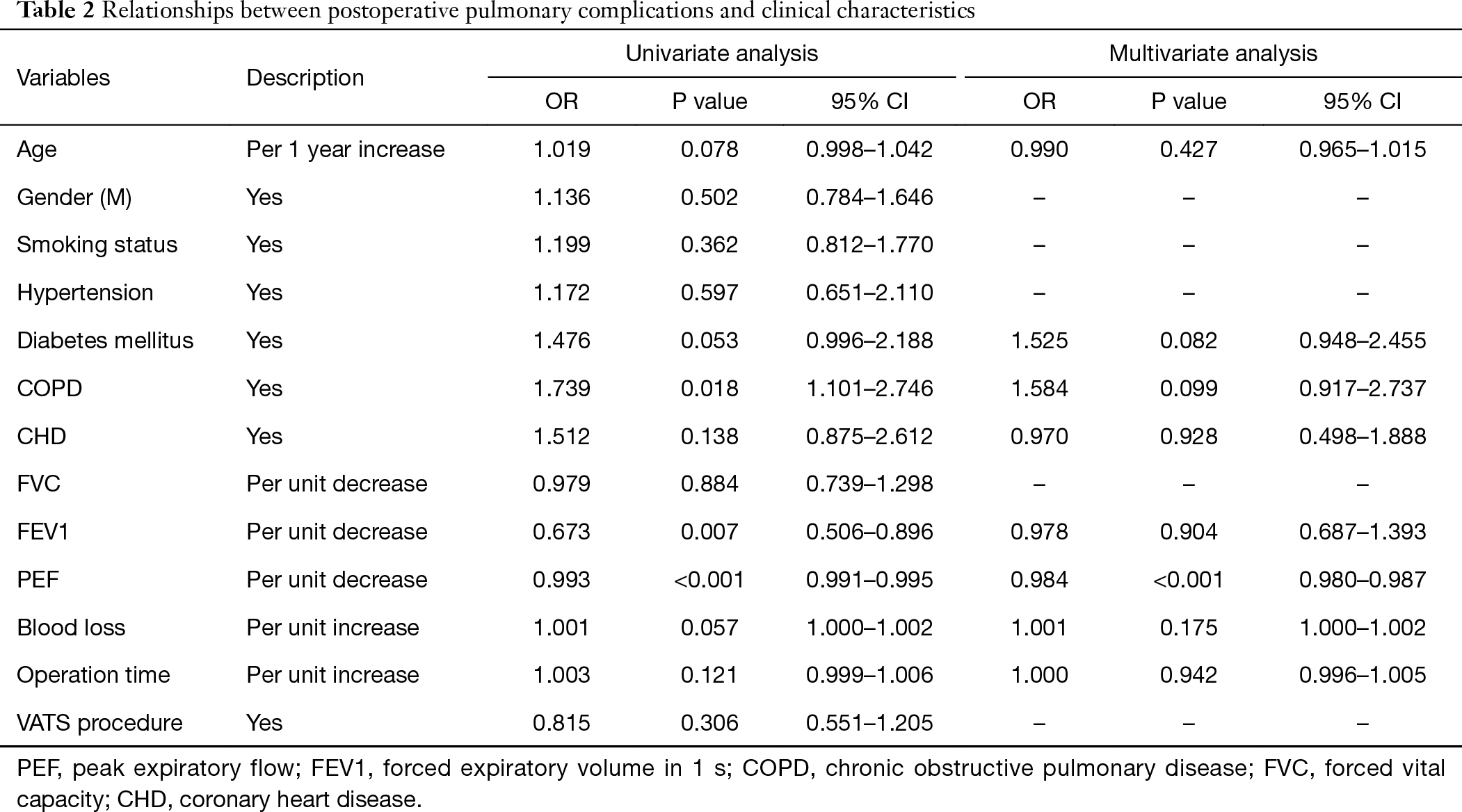 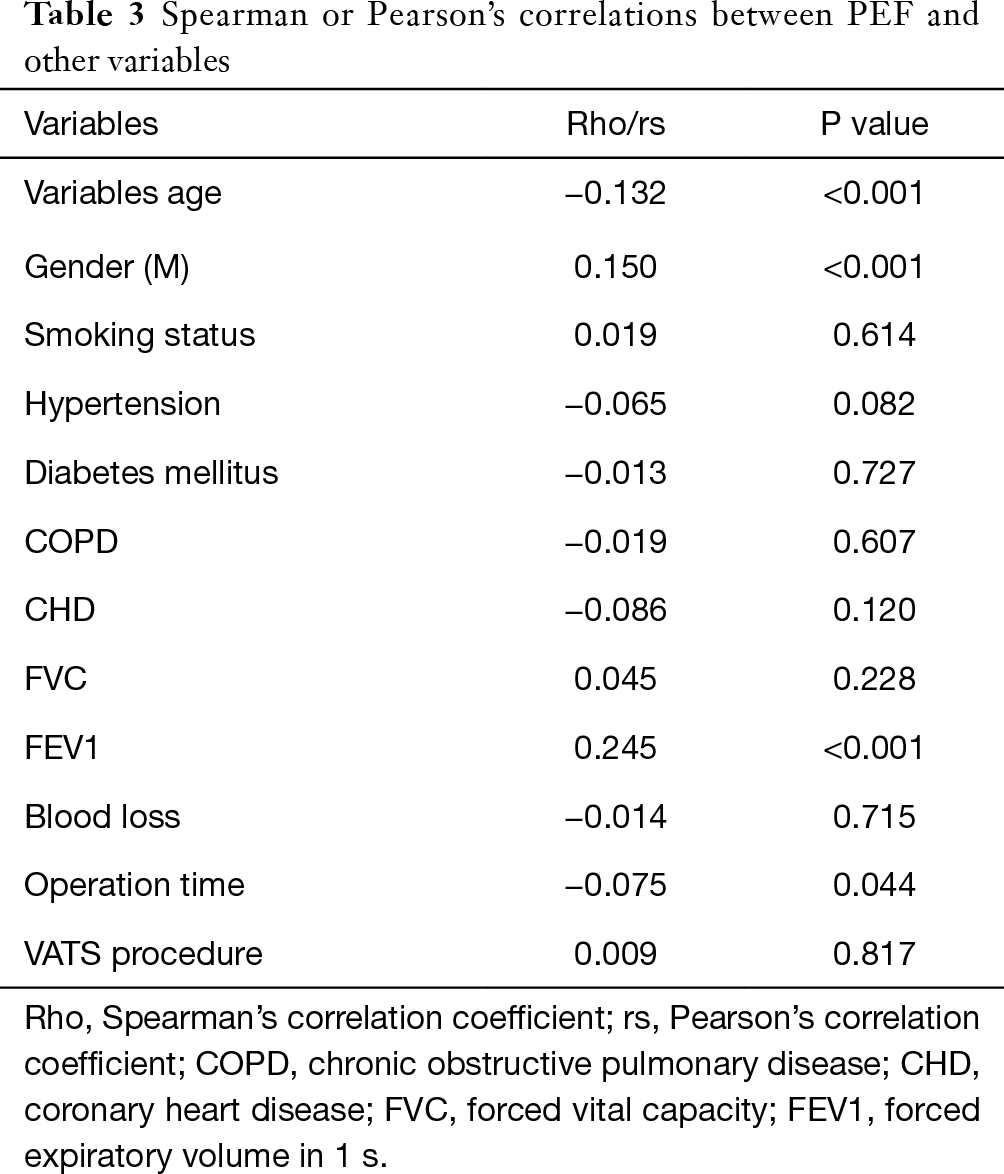 Optimal cutoff of the PEF for predicting PPCs

Figure 1 The distribution of peak expiratory flow (PEF) in patients with and without postoperative complications (PPCs). 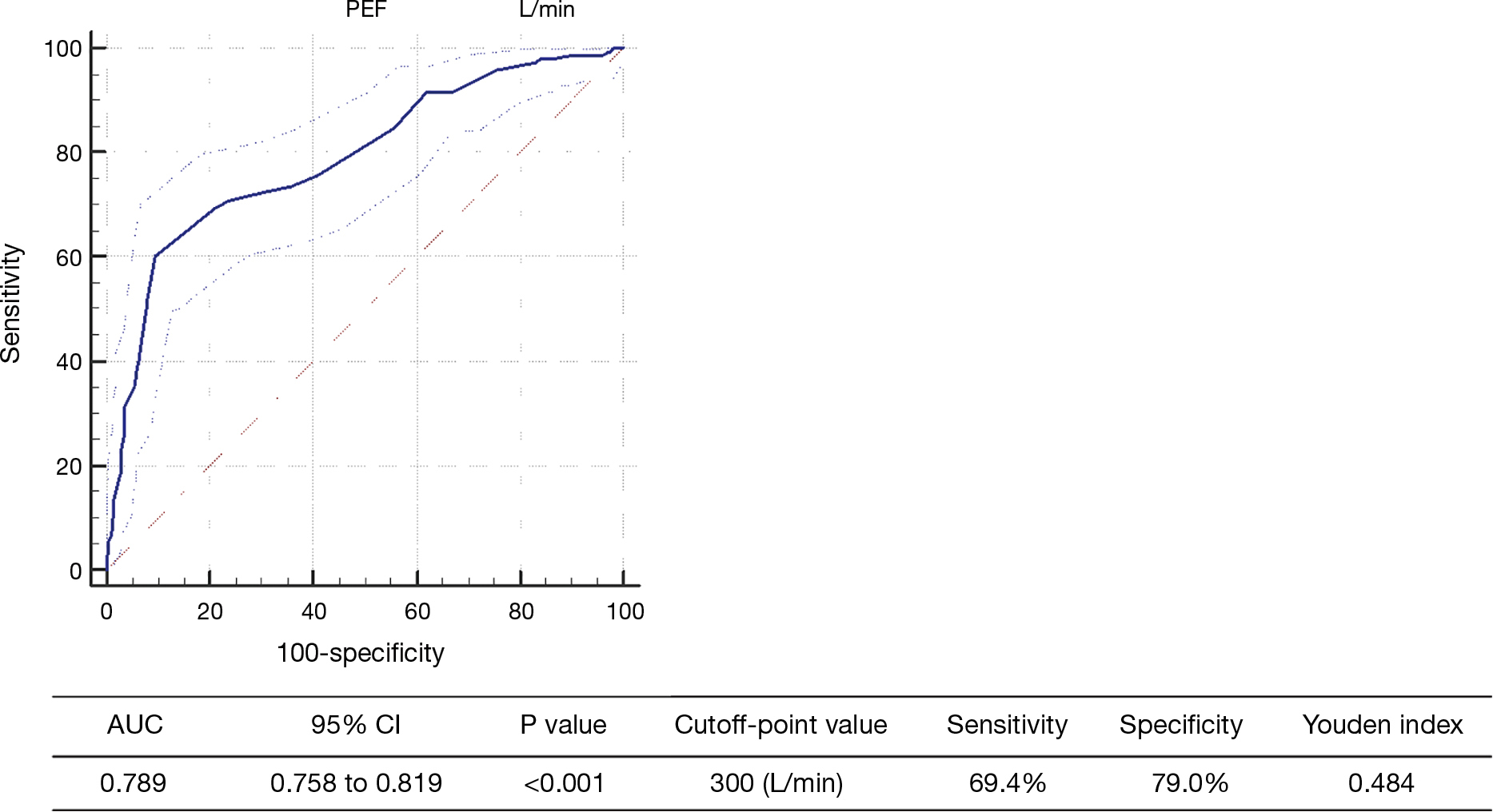 Figure 2 Area under the receiver operating characteristics (ROC) curves for the risk of postoperative pulmonary complications as determined by peak expiratory flow (PEF). 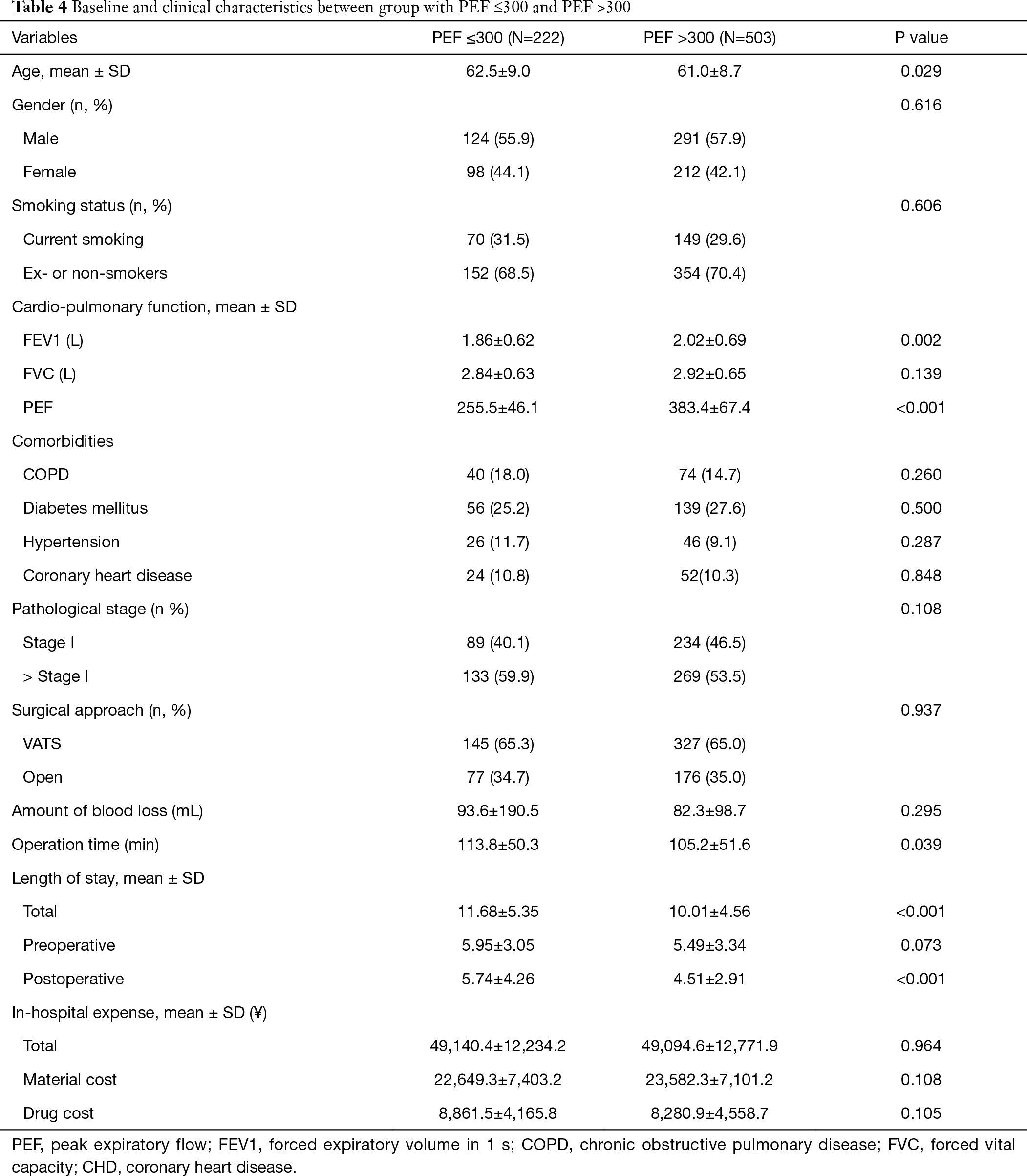 The significant finding of this prospective study was that for lung cancer patients undergoing lobectomy, preoperative PEF value was significantly lower in patients with PPCs after lobectomy than those who without, and PEF ≤300 L/min was a good predictive parameter in discriminating PPCs and PEF.

Numerous studies related to cause-specific mortality have validated that impaired or poor lung function predicts mortality from other specific conditions including lung cancer, rather than from non-neoplastic respiratory disease. Some variables of lung function, for example, FEV1, traditionally has been considered as the critical component of the functional workup of lung cancer candidates waiting for surgery (13-15), as a reduced FEV1 value is considered to be associated with increased respiratory morbidity and mortality rates for surgical lung cancer patients. In the ACCP guidelines [2013] of Physiologic Evaluation of the Patient with Lung Cancer Being Considered for Resectional Surgery, it is also recommended to evaluate preliminary cardiac-pulmonary function (24). Recent years, several studies has been performed to state PEF as a useful measure of physical functioning and health status in elderly population, which is considered to be an independent predictor of increased health-care utilization. Meanwhile, several other studies concerning the relationships between PEF and subsequent cause–specific mortality also reveal associations with cardiovascular events as well as lung-cancer mortality (16-20,25). PEF, as it can be rapidly and easily measured by an in-expensive and hand-held device, may be potentially useful as an indicator of health status for populations with limited access to healthcare, though it has not be validated (18-20). Meanwhile, the PEF reflects airway patency and resistance, respiratory muscle strength and other aspects of lung function, and reduced PEF was evident in a variety of chronic illnesses, and its validity as a health status measure was confirmed by some studies. Hence, we hypothesized that a low PEF suggested poor respiratory muscle strength and lung function, and may be correlated with the occurrence of PPCs after lung cancer lobectomy.

In our study, among the 725 included patients, 19.8% of them were presented PPCs in 30 days after lobectomy with pneumonia, atelectasis and air leak ranking at the top of the categories of PPCs. The occurrence of PPCs inevitably prolonged hospitalization, slowed the postoperative recovery and rehabilitation, increased the risk of morbidity, as well as both medical and labor cost. Based on the results, patients in PPCs group had longer LOS including postoperative (P<0.001), total LOS (P<0.001) and more total in-hospital expense (P=0.030) as well as drug cost (P≤0.001), revealing the adverse effect the PPCs brought to the patients. Meanwhile, FEV1 (P=0.007) and PEF value (P<0.001) were found lower in PPCs group and via multivariate logistic regression analysis and PEF was significant independent predictors for the occurrence of PPCs. Moreover, when we selected 300 L/min as cutoff point based on Onodera’s original cutoff, with the consideration of balancing the sensitivity and specificity, A PEF ≤300 L/min indicated an 8-fold increase in odds (95% CI: 5.692–12.845, P<0.001) of having PPCs after lung cancer surgery, indicating the potential of a low PEF to predict the occurrence of PPCs after lung cancer lobectomy. Furthermore, when the patients were divided into two groups based on whether the PEF value ≤300 L/min, patients with PEF value ≤300 L/min had high PPCs rate as well as pneumonia, atelectasis and mechanical ventilation >48 h than those with PEF >300 L/min. This would significantly explain the strong correlation between a low PEF and PPCs for surgical lung cancer patients.

There are some limitations which can hardly be avoided including its non-randomized nature and single-center design and potential selection bias. All study participants were selected from March 1st, 2017 and December 31th, 2017 by a small group of surgeons in a single regional center. Secondly, we selected patients who underwent lung cancer lobectomy, which meant that those with other surgical type, such as wedge resection, segmental resection or pneumonectomy were not involved, for excluding the confounder caused by surgical types. But on the other side, selection bias was generated, which inevitably limited the generalization of the conclusions. Furthermore, just like other index of lung function (FEV1, e.g.,), age, sex and height gender may be associated with PEF, which makes it necessary for us to perform further study to investigate. Moreover, in the study, we tried to investigate the correlations between some variables and PEF. However, the relative low values of correlation coefficient suggested the relevant correlations were uncertain. Further study is needed to be performed to deeply discuss the issue. Last not the least, for those patients with low PFE value, more researches should be performed for reducing the relatively high risk of PPCs after surgery. We recommend that more attention should be given to some interventions, for example, perioperative pulmonary rehabilitation which may enhance or improve the lung function, and sequentially lead to reduce PPCs rates.

In conclusion, the study we presented identified a significant correlation between a low PEF value and PPCs in surgical lung cancer patients undergoing lobectomy, indicating a low PEF as independent risk factor for the occurrence of PPCs and a PPC-guided (PEF value ≤300 L/min) risk assessment could be meaningful for the perioperative management of lung cancer candidates waiting for surgery.

Ethical Statement: The study was approved by the university’s clinical trials and biomedical ethics committee (No. 2016-121) and written informed consent was obtained from all patients.