Red blood cell distribution width (RDW) is an inexpensive, straightforward, quantitative parameter that is routinely measured by analyzing automated complete blood count (CBC) (1). Several studies have reported that an elevated RDW is associated with clinical outcomes in cardiovascular disease, stroke, septic shock, and pneumonia (2-7), and in coronary artery disease patients, an RDW elevation has been reported to independently predict morbidity and mortality (8-12).

In this regard, we investigated the association between changes in RDW and early adverse clinical outcomes after CABG.

A total of 125 patients underwent CABG at our institution between January 1, 2013 and December 31, 2016. Eight of the 125 patients that underwent aorta, valve or arrhythmia surgery were excluded and the remaining 117 patients that underwent isolated CABG constituted the study cohort. The study was approved by the institutional ethics committee/review board (IRB) of the Gil Medical Center (IRB No. GCIRB2016-369), which waived the requirement for informed consent because of the retrospective nature of the study.

The demographic characteristics, medical records, laboratory studies findings, and clinical outcomes of the 117 study subjects were collected by searching the institutional computerized clinical database. Detailed clinical and laboratory data was collected from time of admission to discharge. EuroSCORE II was calculated using the calculator provided on the official website (http://www.euroscore.org). Complications and mortality were defined are those occurring during hospitalization for surgery, which included all in-hospital postoperative days to discharge, even when over 30 days.

Patients were discharged from the intensive care unit (ICU) when their physiologic status had stabilized without the administration of intravenous drugs to support cardiac function and there was no longer a need for ICU monitoring and treatment. When patients were awake enough to maintain spontaneous breathing and adequate oxygenation was identified by arterial blood gas analysis with minimal ventilator settings, they were weaned off mechanical ventilation.

Participants were allocated to one of two groups depending on the occurrence of an early adverse event, that is to a No-event or an Event group (N=79 and 38, respectively). When let us suppose postoperative RDW is elevated before adverse events, it may rise immediately or a few day later after surgery according to adverse events. Therefore we set the preoperative RDW to baseline and set the difference of postoperative maximum RDW as a variable. Delta RDW values (ΔRDW), defined as Post-Peak RDW minus Pre-RDW, were calculated and group RDW data were compared. Student t-tests were used to compare normally distributed group continuous variables and Mann-Whitney U tests were used to compare non-normally distributed continuous variables. Group categorical variables were compared using the Chi-square test or Fisher’s exact test. Continuous variables are expressed as means ± standard deviations (SDs) or as median values and interquartile ranges when non-normally distributed. Categorical variables are presented as numbers and percentages.

The effect of ΔRDW on primary outcome was identified by constructing a receiver operating characteristic (ROC) curve, and the cut-off point, that is, the value that provided best sensitivity and specificity was determined. The clinical data and primary outcomes of patients with ΔRDW below or above the determined cut-off point were compared.

Potential risk factors of primary adverse outcomes were identified by univariable logistic regression modeling. Significant univariable correlates were entered into a reverse stepwise multivariable logistic regression model to confirm they acted as independent factors. All P values given are 2-sided and P values of <0.05 were considered to indicate significance. SPSS version 19.0 (Korean version; IBM Corporation, USA) was used for the analysis. 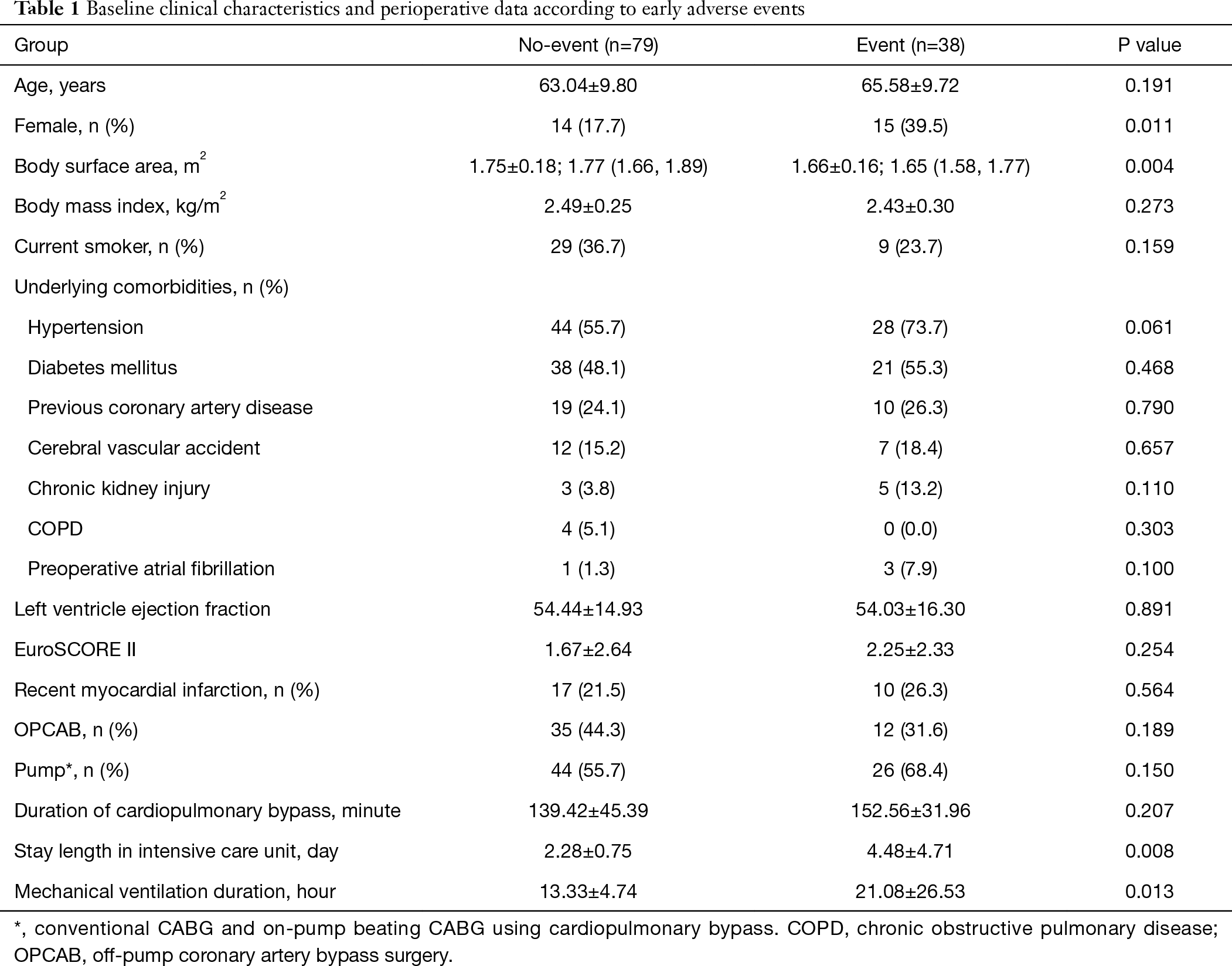 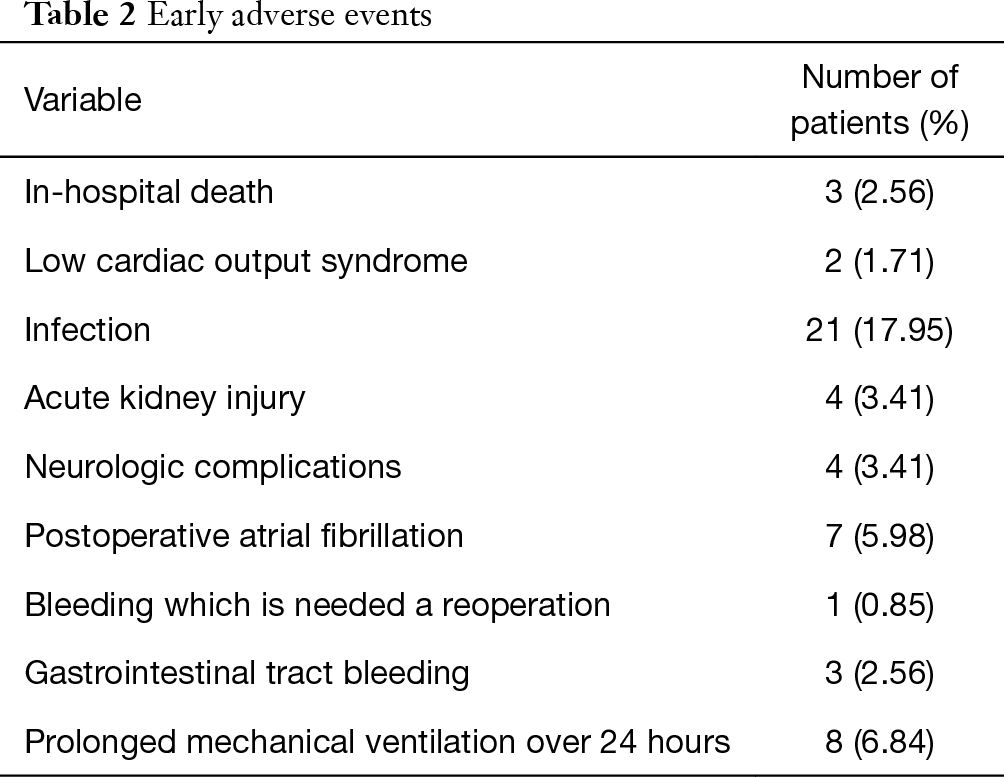 Preoperative and postoperative laboratory data are summarized in Table 3. Mean Pre-RDW and Post-RDW were 13.10±0.95 and 13.42±0.95 (P<0.001), that is, RDW increased significantly after CABG. Mean Post-Peak RDW was 14.47±1.42. In the event group, Post-RDW, Post-Peak RDW, ΔRDW, Post-Peak CRP (cross reactive protein), and ΔCRP were all significantly higher in the Event group. 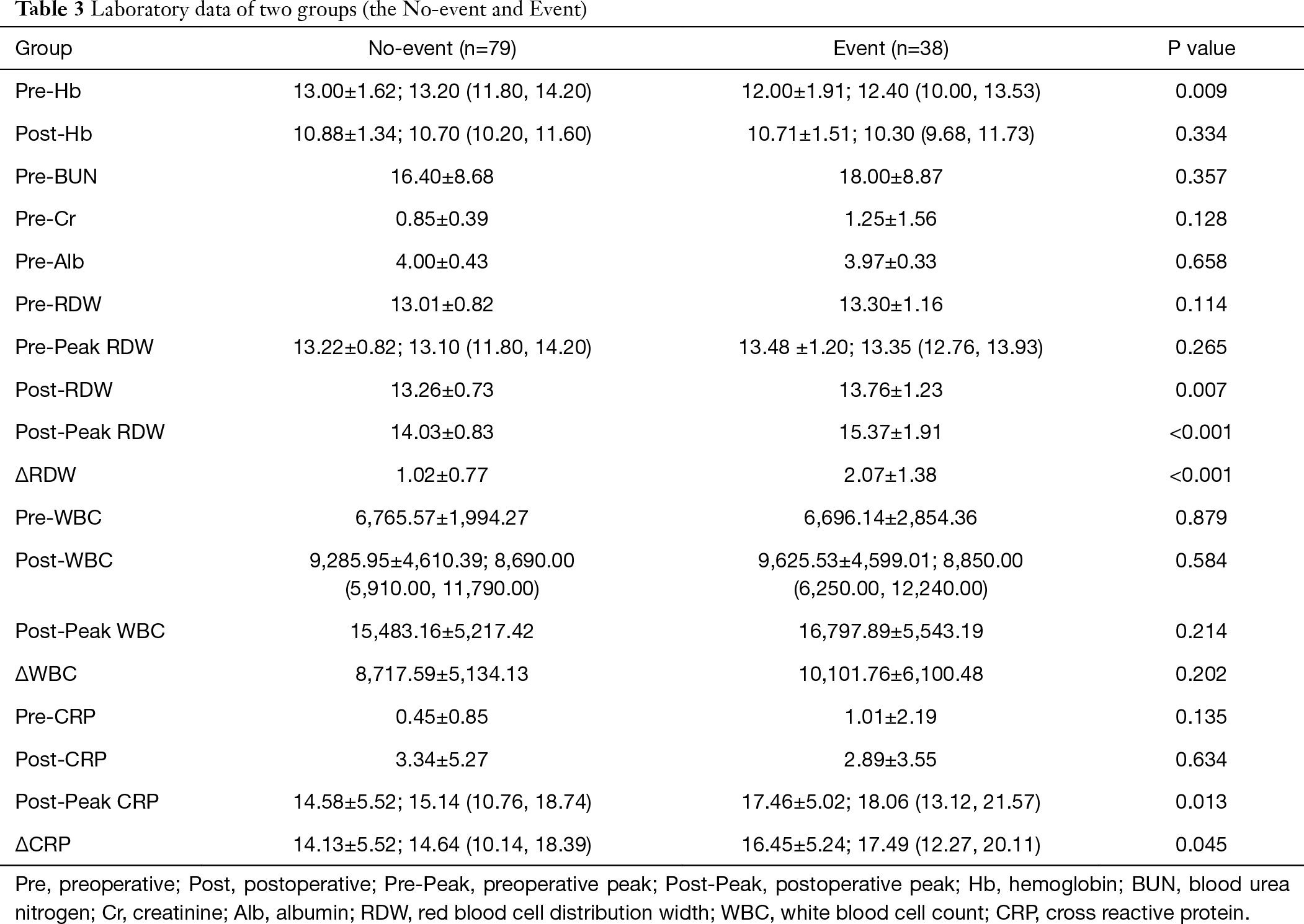 Patients were divided into tertiles based on ΔRDW (defined as Post-Peak RDW − Pre-RDW). ΔRDW tertiles were as follows: <0.8 (n=38), 0.8–1.59 (n=39), ≥1.6 (n=40). No significant difference was observed between ΔRDW tertiles in terms of demographic or perioperative variables (Table 4). However, early adverse events were significantly different (P<0.001). Rates of infection, neurologic complications and GI bleeding significantly increased with ΔRDW tertiles (P=0.005, 0.015, and 0.035, respectively). 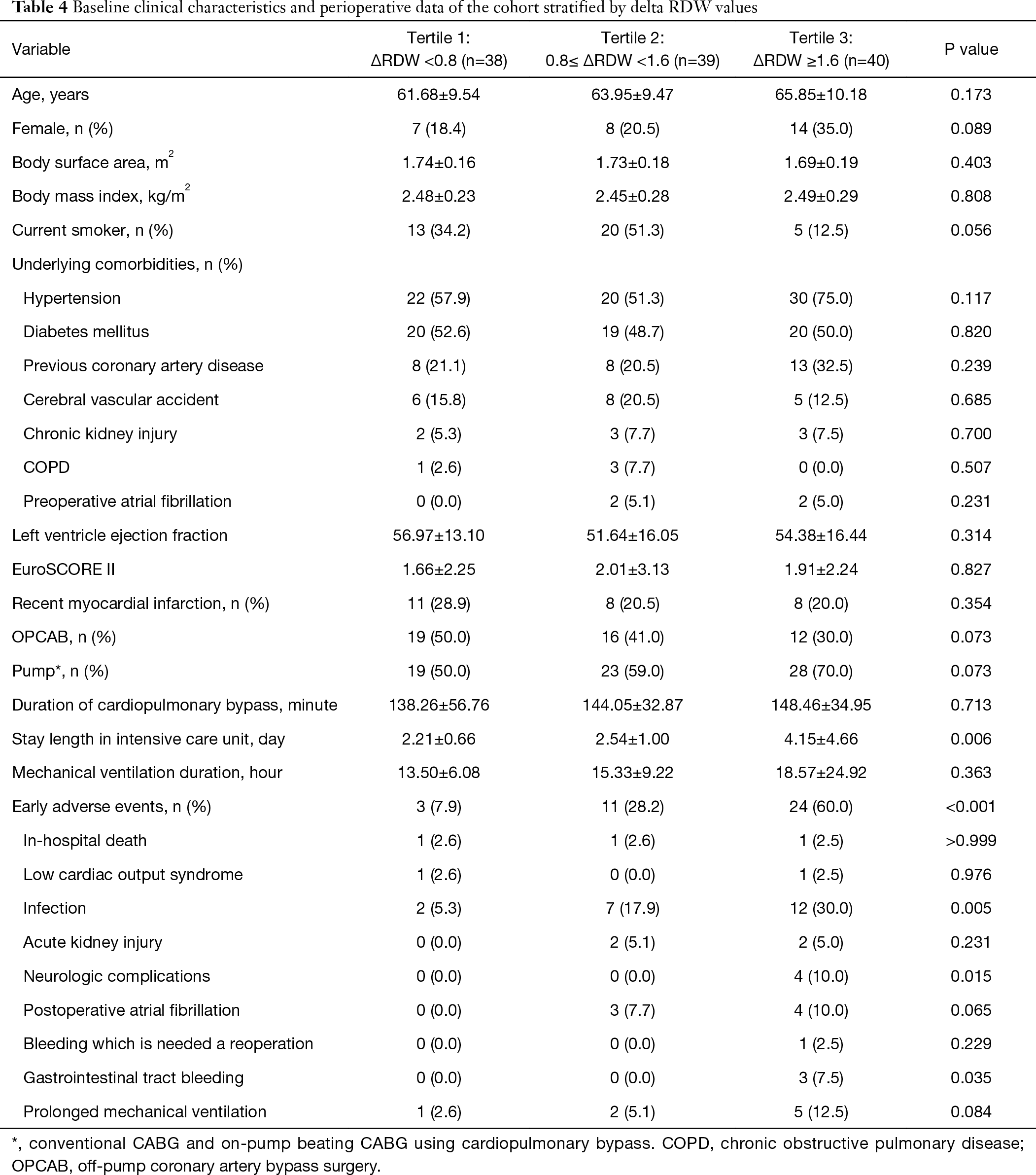 ROC curve analysis was used to determine the optimal ΔRDW cut-off value for predicting early adverse events (Figure 1). The ROC curve showed that a ΔRDW cut-off of 1.45 had a sensitivity of 71.1% and specificity of 78.2% for predicting early adverse events after CABG. Table 5 details the baseline clinical characteristics of patients with ΔRDW values below and above this cut-off point. CPB was found to significantly influence ΔRDW, but CPB duration did not have a significant effect. Early adverse events, particularly, infections and neurologic complications, were significantly more frequent in those with a ΔRDW of ≥1.45 (P<0.001). GI bleeding and prolonged mechanical ventilation were more frequent but not significantly so in those above the cut-off point, and duration of ICU treatment was longer (P=0.009). ROC analysis of ΔCRP revealed a lack of sensitivity and specificity to predict early adverse events (AUC; 0.615, P=0.045, CI: 0.506–0.723). 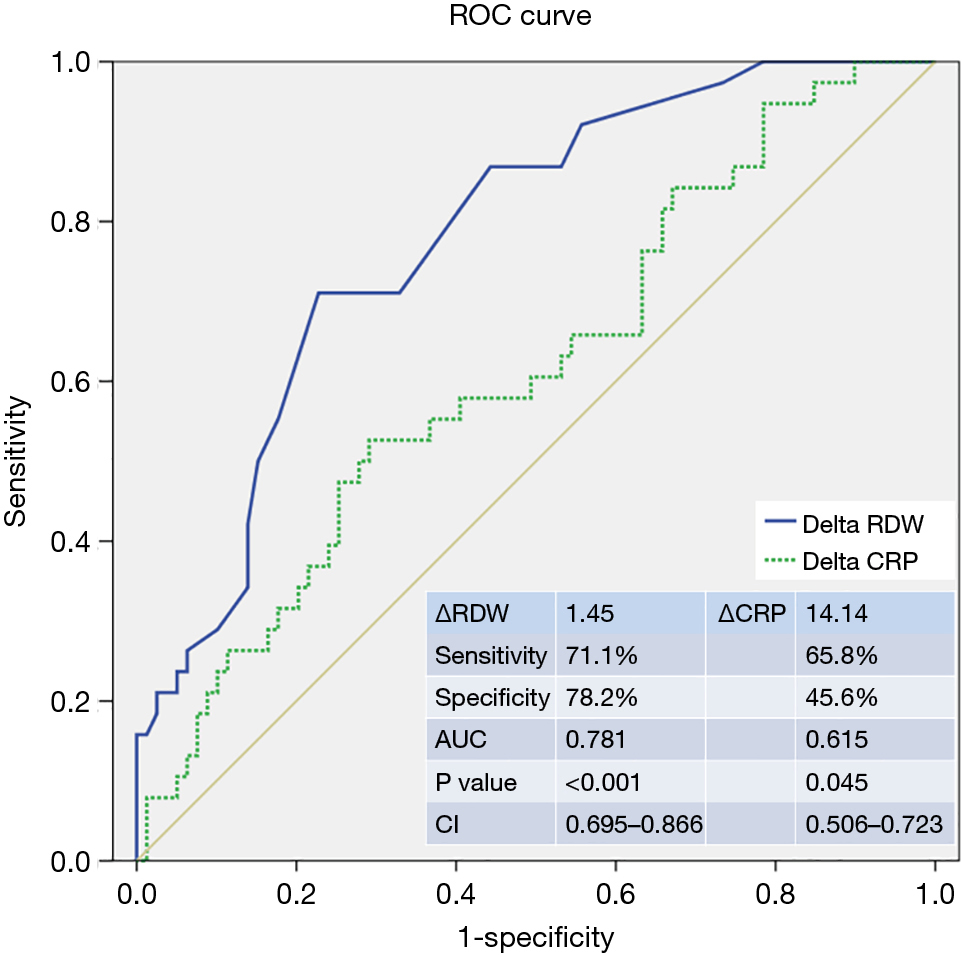 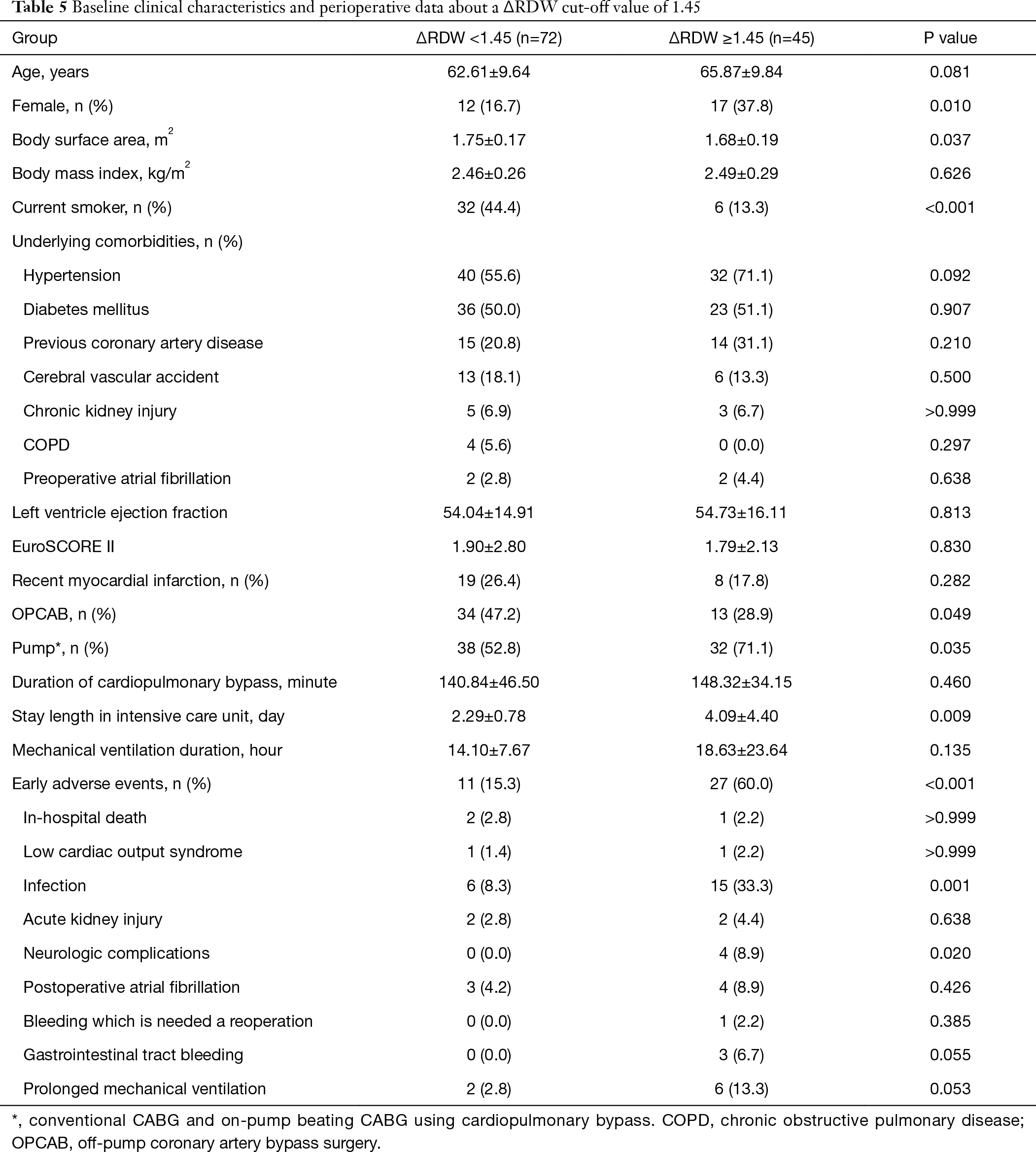 Figure 2A shows RDW trends from before surgery to discharge among the 15 patients with a ΔRDW of ≥1.45. Time to detect an infection of these patients was matched on hospital day 15. RDW values of most patients remained consistently higher than their preoperative RDW values or increased again before infection onset, except in patients 7 and 11. Patient 7 developed a deep sternal wound infection and her RDW was found to be elevated after infection onset. Patient 11 developed phlebitis at a peripheral intravenous infusion site. As a reference, a trend of RDW for 18 patients without events in groups with a ΔRDW of ≥1.45 is descripted in a Figure 2B. Elevated RDW decreased a few days later postoperatively. 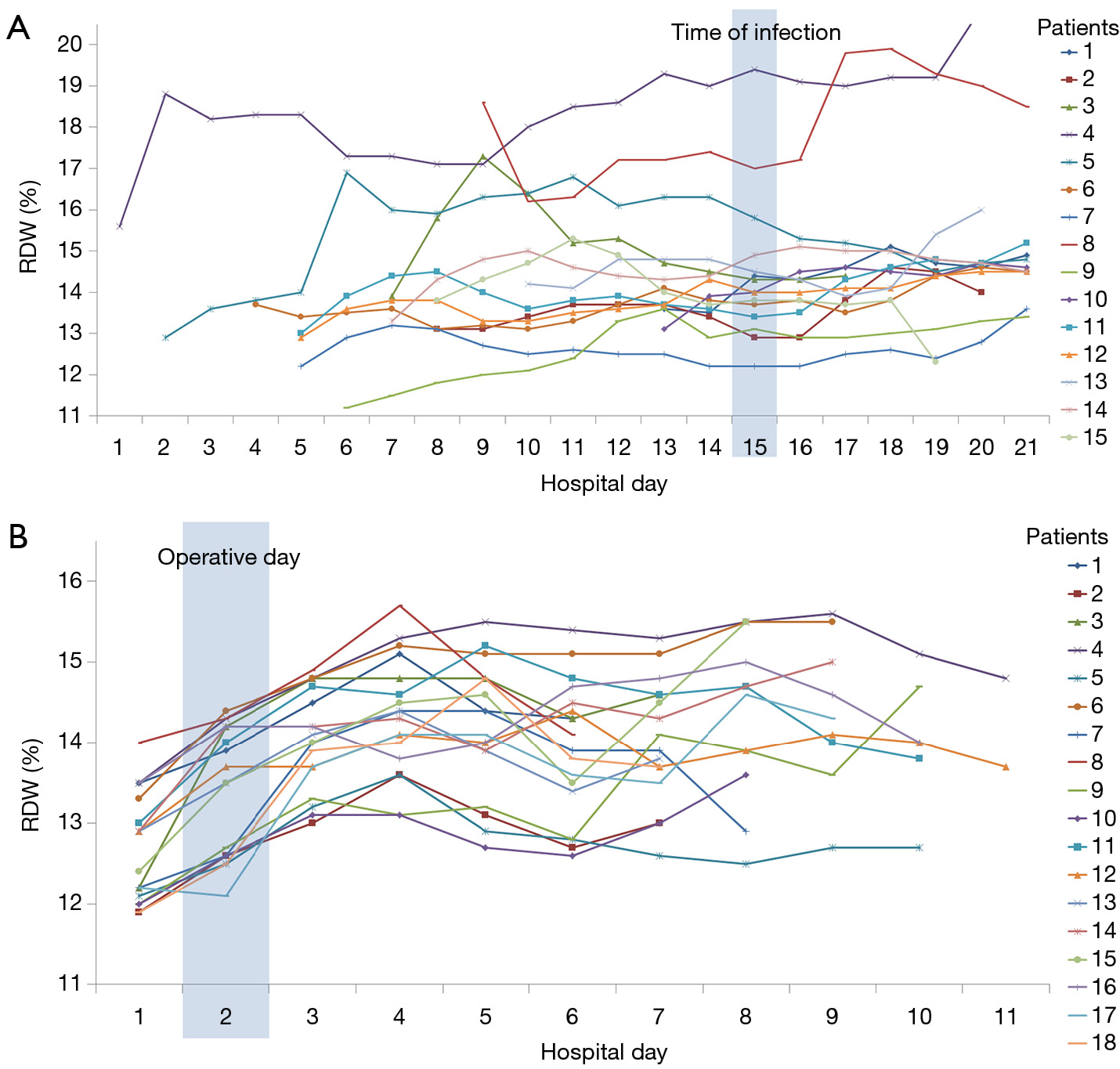 Red blood cell (RBC) volumes are normally between 80 and 100 fL, but these volumes are dependent on medical status (1). Previous studies shown RDW predicts clinical outcomes in cardiovascular disease (1,21,22). In cardiac surgery, preoperative RDW is strongly related to surgical outcomes (17-20,23,24). However, previous studies focused on relationships between preoperative RDW and postoperative outcomes. In the case of cardiac surgery, CPB can induce systemic inflammation, which may cause substantial RDW changes after surgery (15,16). Furthermore, little is known of relations between preoperative RDW and acute inflammation and oxidative stress after cardiac surgery. In the present study, we investigated the nature of relations between postoperative RDW changes and early adverse events after cardiac surgery. To minimize bias associated with different types of cardiac surgery, all patients enrolled in the present study underwent isolated CABG. ΔRDW was defined as the difference between highest postoperative RDW (Post-Peak RDW) and preoperative RDW (Pre-RDW). We found ΔRDW in the Event group was significantly greater than in the No-event group. When all 117 study subjects were classified by ΔRDW tertile, the incidence of early adverse events was observed to increase significantly by tertile, and rates of infection, neurologic complications and GI bleeding were also significantly increase. Our most interesting finding was that ΔRDW values were significantly and positively associated with early adverse events after isolated CABG. Furthermore, preoperative RDW values were not significantly different in the Event and No-event group contrary to previous studies, which suggests postoperative RDW may be a better predictive parameter than preoperative RDW in situations involving acute changes in systemic inflammation, such as, CABG. In a previous study on relations between RDW and clinical outcomes after acute myocardial infarction (13), an increase in RDW during hospital stay was found to be associated with mortality after hospital discharge. These finding indicate when RDW values show a continuous increase after surgery or a reincrease after a decrease after surgery, surgeons should monitor carefully for adverse events. Figure 2 shows perioperative RDW trends, and that in patients who developed an infection RDW remained high after surgery or reincreased before infection was identified. The reasons for this result are unclear, but conceivably, the changes in RDW may represent an integrative measure of multiple pathologic processes after CABG (e.g., cardiac dysfunction, myocardial infraction, oxidative stress, systemic inflammatory reaction, multiorgan dysfunction after surgery). Salvagno explained that impairment of balance between oxidants and antioxidant defenses influents on erythrocyte homeostasis and increases RDW through increased red cell turnover (21). Bujak et al. (1) reviewed several hypotheses for poor prognosis in patients with cardiovascular disease, and suggested systemic inflammation might influence RDW. If the surgically induced inflammatory reactions subside, the RDW should decrease. Early adverse complications, especially infections, may physiologically persist oxidative stress and systemic inflammation. These conditions may influent that erythropoietin overproduction and increasing RDW levels.

In the present study, ΔRDW was found to well predict early complications. Furthermore, we identified a ΔRDW cut-off point of 1.45 by ROC analysis, and observed that rates of early adverse events were higher in patients with a ΔRDW of ≥1.45. WBC and CPR are also markers of inflammation, but unlike ΔRDW, we did not find ΔCRP and ΔWBC were associated with early adverse events. Although ΔCRP was also significantly independent predictor in model 1 to 3, its significant was disappeared in model 4. In a previous study, postoperative CRP was reported to be associated with postoperative major adverse cardiovascular and cerebral events (25), whereas in the present study, ΔRDW was the stronger powerful factor than ΔCRP because ΔCRP failed to retain significance after stepwise multivariate analysis. In a previous comparative study, it was concluded RDW is a stronger predictor of coronary heart disease mortality than hs-CRP (high sensitivity CRP) (26,27). It would appear that inflammation alone cannot explain the different results obtained for inflammatory markers, and thus, our results indicate postoperative RDW increases are the result of a multifactorial phenomenon. Further research is needed to identify factors responsible for RDW increases.

This present study has several potential limitations. First, it is inherently limited by its observational, retrospective design, and thus, we cannot provide sound explanations for the results obtained. Nonetheless, we did find ΔRDW importantly predicted early adverse events. We suggest our findings be confirmed by larger-scale prospective studies, and that biochemical studies be undertaken to identify the pathophysiology responsible for RDW changes.

Second, our results may have been influenced by the relatively small cohort size. We tried to performed subgroup analysis to reduce CPB-induced bias, but could not find the effect of CPB because of small sample sizes. We suggest a larger-scale study be undertaken with a view toward identifying other independent factors of adverse events and clarifying the effect of CPB on postoperative ΔRDW.

Ethical Statement: The study was designed retrospectively. The study was approved by the institutional ethics committee/review board (IRB) of the Gil Medical Center (IRB No. GCIRB2016-369), which waived the requirement for informed consent because of the retrospective nature of the study.