Pleural empyema (PE) is an infectious condition of the pleural cavity (1). The most frequent cause of PE is pneumonia, when a pre-existing parapneumonic effusion gets superinfected by bacteria, often due to perforation of a subpleural pulmonary abscess (2,3). Other common causes are previous thoracic surgery or other invasive thoracic interventions, esophageal diseases, trauma, sub-diaphragmatic infections and sepsis (3,4). PE itself is associated with high morbidity and mortality rates independently from the underlying disease (4). According to the American Thoracic Society (ATS) PE is classified into three phases: the early exudative (phase I), the intermediate fibroproliferative (phase II) and the late organized phase III (1). If therapy is insufficient the earlier phase of PE merges into the next one and the disease gets more complicated (1,3). Therapy is stage dependent and should focus on controlling the infectious focus (i.e., antibiotics), evacuation of fluid and pus collections (needle aspiration, chest tube insertion or surgery), re-expansion of the lung and re-establishment of the physiologic respiratoric chest mobility (degradation of fibrinous septa and removal of fibrotic capsules from the lung’s surface, the diaphragm, mediastinum and chest wall either by fibrinolytic agents or by surgery) (1,5).

In organized phase III empyema conventional open surgery (COS) via thoracotomy has remained the most established, gold standard approach for decortication. So far, only little experience exists on decortication in late phase PE via a minimally-invasive video-assisted thoracoscopic surgery (VATS) approach (5,6). However, those few so far published retrospective case series suggest principal feasibility and safety of VATS for pulmonary decortication (5,6).

We herein report an institutional experience with the VATS approach for lung decortications in organized phase III PE with a particular focus on the learning curve.

At Department of General, Visceral, Transplant and Thoracic Surgery at Giessen University Hospital a VATS-program for more complex thoracic surgical procedures was started in 02/2011. Initially, all complex VATS-procedures (anatomic lung resections, mediastinal tumor resections, decortications in phase III PE) were taken care of by one single experienced senior thoracic surgeon either as the performing surgeon or the teaching assistant.

Only patients with documented ATS-phase III PE with a restrictive pleural scar tissue/fibrous cortex overlying and constraining the visceral pleura were included in this retrospective study. Patients were treated by the institutional standard of care. Patient data were retrospectively analyzed from the prospectively maintained institutional database.

In order to analyze the learning curve of minimally-invasive VATS decortication in organized phase III PE in a cohort as homogenous as possible, patients with bilateral PE and patients primarily conducted to COS for phase III PE were excluded. Conversions from an initial VATS approach to COS were classified as intra-operative complications and the respective patients were excluded from further outcome analysis. Recurrent disease indicating a redo-operation was classified as post-operative complication and the respective re-VATS or re-COS procedures were not included into the outcome analysis. For assessing the learning curve the cohort of patients was divided into two groups based on operation date [VATS-1: from 03/2011 to 06/2012, n=43 (33.9%) and VATS-2: from 06/2012 to 03/2015, n=84 (66.1%)].

The retrospective acquisition of data was formally approved by the local ethics committee of the medical faculty, Justus-Liebig-University of Giessen, Germany (AZ 114/14 and AZ 242/13). As this is a retrospective patient data analysis, all patients were treated by the present local standard of care.

Patients were placed in lateral decubitus position and underwent general anesthesia with a double-lumen endotracheal tube for selective single-lung ventilation. An anterior VATS-approach with a 30 degree camera without rib-spreading was used for minimally-invasive empyema evacuation and lung decortication. The thoracocenteses were positioned according to the expansion of the PE based on the patients’ pre-operative computed tomography scans. Strict focus was put on initially entering the pleural cavity at an area, where the lung was in direct contact to the chest wall preferably without any empyema lying in between. In most cases the first thoracocentesis was placed in the area of the fourth intercostal space, anterior axillary line; initially in a uniportal approach the lung was gradually mobilized by taking down its adhesions to the chest wall. Dissection was performed mainly bluntly using an endo-Kittner or the cautery hook as a dissector. Once the lung was freed anteriorly all the way down to the diaphragm, two additional basal thoracocenteses were placed to continue the operation in a three port technique. The anterobasal thoracocentesis was used as the camera port. The dissection/lung decortication was processed laterodorsally by peeling the lung’s visceral pleura off the fibrous cortex encapsulating the empyema. Thereby care was taken to keep the empyema sac, separating the lung from and surrounding the fluid empyema components, intact. This step was usually facilitated by partial or complete ventilation of the lung via the double-lumen endotracheal tube. After complete mobilization of the lung, empyemectomy was performed by dissecting the corresponding parts of the empyema capsule off the diaphragm, the chest wall and the (mainly posterior) mediastinum. However, the fibrotic capsule no seldom ruptured during this maneuver—or even earlier—and the leaking liquid empyema components were controlled with a sucker.

At the end of the procedure 1–3 chest tubes were placed and negative pressure was usually applied for at least 2 days and/or until chest X-ray confirmed complete (re-) expansion of the lung. Chest tubes were removed consecutively as soon as air leakage had stopped and/or fluid collection was below 300 mL per day.

P values <0.05 were considered to indicate statistical significance. Data are given in mean ± SEM as well as in median (range).

Between 02/2011 and 03/2015 one-hundred-thirty-eight patients were conducted to surgery for late organized phase III PE. Within those, 3 patients had bilateral disease and 8 patients were primarily treated by COS. The remaining 127 (94.1%) patients conducted to minimally-invasive surgical (VATS-approach) empyema evacuation and lung decortication were included into this study.

In 5 patients the initially intended VATS approach was converted to COS and the respective patients were excluded from further outcome analysis. In 8 patients 10 redo-interventions for recurrent disease were performed after initial VATS decortications and those 10 respective redo-procedures were classified as post-operative complications and not included into this primary outcome analysis.

Although patient characteristics within both the VATS-1 and VATS-2 group were widely balanced, male gender was over-represented among patients from VATS-2 and patients from VATS-2 pre-operatively were more multi-morbid reflected by a significantly higher ASA- (American society of anesthesiologists’ classification of physical health) score. By tendency more (P=0.0534) patients from VATS-2 (n=37) were treated by pre-operative drainage therapy, indicating a prolonged medical treatment prior to and a delay of surgery (Table 1). However, no differences were observed in the length of pre-operative hospital stay between both groups (Table 2). 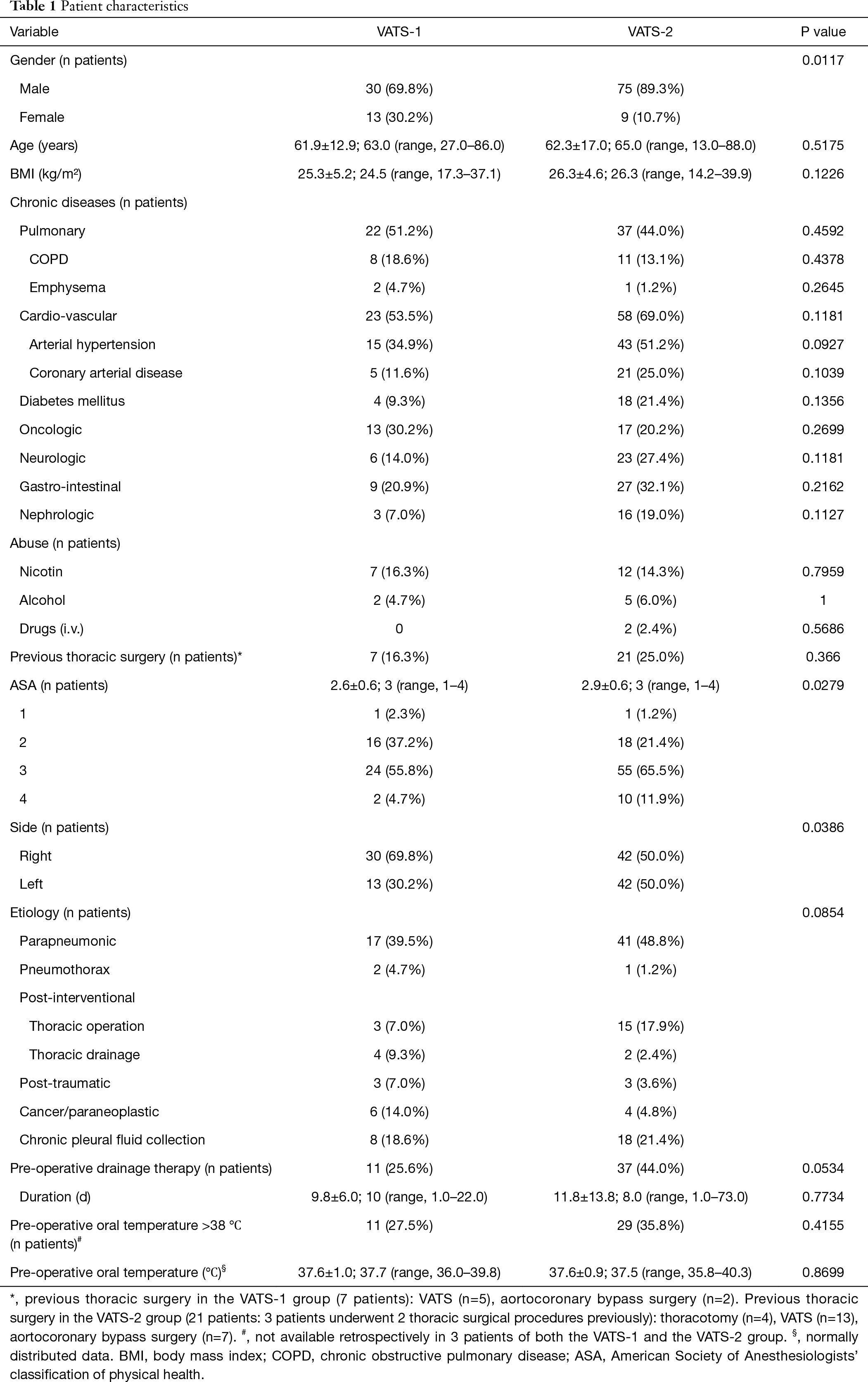 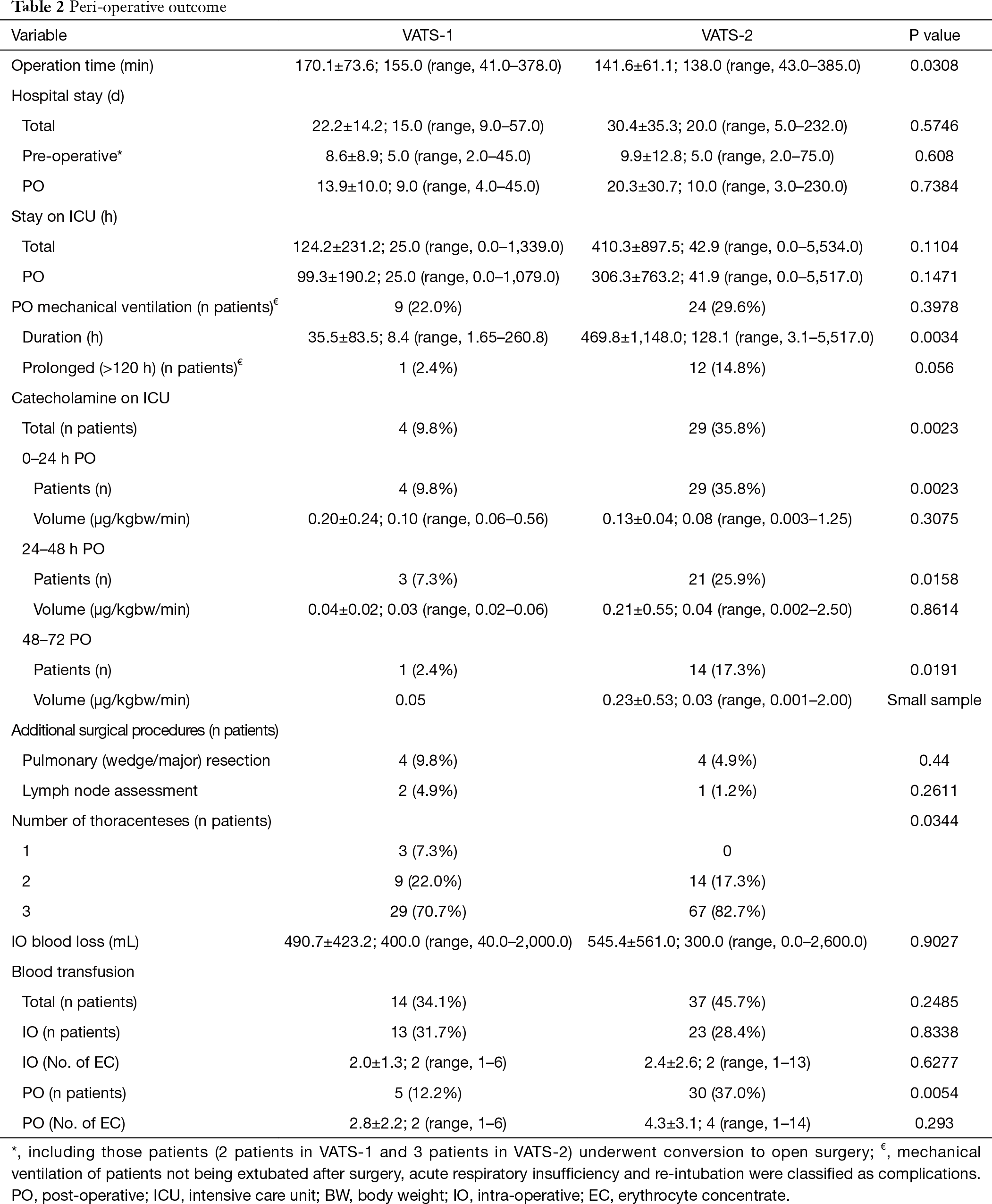 Operating times were significantly longer (P=0.0308) among the first third of patients (VATS-1) compared to the following two thirds (VATS-2). Nevertheless, no differences were seen in the rate of intra-operative complications or conversions to open surgery as well as the intra-operative blood loss (Tables 2,3). 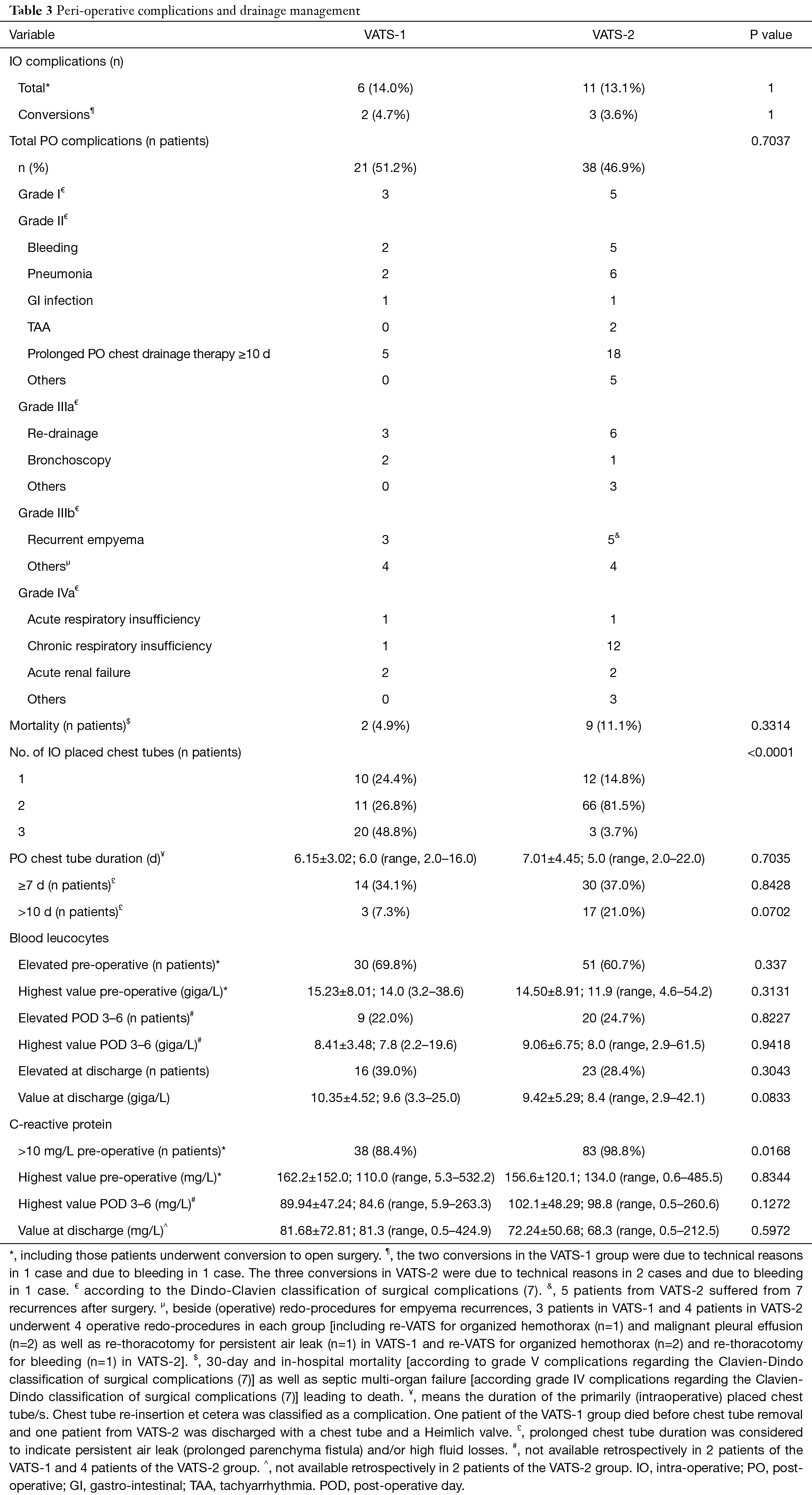 Complete decortication, i.e., removal of all fibrotic tissue constricting the lung is of utmost importance for the success of surgical therapy in phase III PE. Any remaining cortex on the lung’s surface preventing its complete re-expansion and thus leaving an empty space within the pleural cavity leads to recurrent pleural effusion which is of high risk for getting re-infected; mainly when the—most often—underlying pneumonia is usually not fully recovered at time of surgery.

Lung decortication is a challenging and time-consuming procedure. Meticulous dissection is mandatory in order to peel the sticking fibrotic cortex off the visceral pleura without causing too many lesions consequently leading to prolonged air leaks. The most established surgical approach for lung decortication in late phase PE is COS and the minimally-invasive VATS approach has been evaluated quite delayed (when compared to other complex thoracic procedures like anatomic lung resections) for this particular procedure.

The feasibility of evacuation and decortication in phase III PE via a VATS approach initially was suggested in various retrospective analysis: their validity was limited by rather small and mostly inhomogeneous cohorts mixing up both phase II and III PE patients (5,8). However, those series suggested that the benefits [with regard to post-operative pain, post-operative complication rate, LOS, pulmonary function, quality of life (9-13)] of a VATS over a COS approach known in oncologic thoracic surgery come to effect also in empyema surgery (5,14-17). Thus, in its recent expert consensus statement the European Association for Cardio-Thoracic Surgery (EACTS) has recommended a primary VATS-approach for the surgical management even for organized phase III PE (5).

Overall, reported post-operative morbidity, mortality and re-intervention rates (up to 25.1%, 7.6% and 23.8%, respectively) of VATS decortications in phase III PE are rather high (5) and a limited experience in thoracic surgery is reported to be one risk factor for intra-operative conversion to COS as well as for treatment failure after surgery (5,8). Thus, the surgeons’ experience and technical skills seem to be a major factor influencing the outcome in VATS empyema surgery. For VATS pulmonary lobectomies a number of 30 to 50 procedures was quoted as the required learning curve numbers of an averaged talented trainee and 20 cases per year were recommended to preserve the technical skills constantly (18-21). Compared to lobectomies for early (I) stage non-small cell lung cancer (NSCLC), thoracic surgery in chronic inflammatory/infectious conditions is technically even more challenging due to severe adhesions and fibrotic changes, neovascularization and lymph node reactions (22-25). Visualization and anatomic orientation are impaired, which bears the risk for significant bleeding by injuring hilar structures during mobilization of the lung. This study aimed to determine a realistic learning curve volume for VATS decortications in phase III PE by evaluating operative time, peri-operative complication and morbidity rates. Hypothesizing the learning curve to be at least the same or even higher than known in minimally-invasive anatomic lung resections (18-21), outcomes of the first, assumed “learning curve” third of patients (n=43) were compared to those of the second two thirds of patients (n=84). Severity of disease was similar between both groups although in VATS-2 patients both higher pre-operative CRP-values and pre-operative body temperature indicated severer inflammatory reactions and a longer pre-operative drainage therapy indicated a potentially delayed decision for surgery (Tables 1,3) (14,26,27). However, operative times as the most relevant outcome parameter for the learning curve was significantly longer among VATS-1 compared to VATS-2 patients. Post-operative LOS at ICU, chest tube duration and post-operative overall LOS were chosen as secondary outcome parameters in this study. Interestingly, despite shorter operative times in VATS-2 and a similar LOS at ICU among both groups, both the rates of prolonged post-operative mechanical ventilation and of prolonged vasoconstrictive therapy were higher in VATS-2. This may be explained by the impaired physical status and a higher peri-operative risk of the respective patients reflected by significantly higher pre-operative ASA-scores in VATS-2 (28). The constantly rising ASA-score over the study period might indicate that with growing surgical experience even severer cases and sicker patients were operated on.

The LOS at ICU as well as the duration of chest tube insertion are both parameters significantly influencing the overall post-operative LOS (29). A prolonged air leak and/or a prolonged high volume output are frequent post-operative complications inducing a delayed (>10 days) chest tube removal (29-31). The rate of prolonged chest tube duration was slightly higher in VATS-2 (P=0.0702), which might, however, be based on the fact that fewer tubes were inserted in patients of this subgroup; thus, delayed removal eventually could have been prevented by a more extensive (3 vs. 2 tubes) initial drainage of the pleural cavity at the end of operation, thereby facilitating an immediate complete re-expansion of the lung. The higher rate of patients who underwent mechanically over-pressure ventilation post-operatively may explain the higher rate of prolonged air leaks in VATS-2.

In conclusion, a VATS approach for empyema evacuation and lung decortication in phase III PE has shown to be feasible and safe with an acceptable rate of peri-operative morbidity in this study. A significant reduction of operative times between the two subgroups suggests a learning curve volume of approximately 40 cases as being sufficient in order to develop relevant procedure specific surgical skills and experience.

Ethical Statement: The retrospective acquisition of data was formally approved by the local ethics committee of the medical faculty, Justus-Liebig-University of Giessen, Germany (AZ 114/14 and AZ 242/13).