Lung cancer is one of the most common malignant tumors, and its incidence has been increasing worldwide, including in China (1-4), posing a serious threat to public health. According to the 2013 data from the National Central Cancer Registry of China, lung cancer is the leading cause of cancer deaths among men and women, in cities as well as in rural areas (5). The World Health Organization (WHO) predicts that by 2035, there will be more than 1.25 million lung cancer deaths per year in China, which will become the country with the highest incidence of lung cancer (6).

As the incidence and mortality increase, studies have shown that the underlying pathology of lung cancer has also changed. Globally, the incidence of lung adenocarcinoma (ADC) has exceeded that of squamous cell carcinoma (SQ), the proportion of lung SQ cases in men has dropped significantly, and the proportion of lung ADC cases in women continues to rise (1,2,7-9). These findings are consistent with studies conducted in China (10-16). The epidemiological characteristics of lung cancer changes according to time, geographical location, and population subsets. This study examined the data of 3,733 patients with lung cancer undergoing surgery at the Peking University Cancer Hospital between 2000 and 2013, analyzing incidence trends, age of onset of cancer, and differences in the distribution according to sex and pathology of patients with lung cancer. The aim was to elucidate the clinical-epidemiological characteristics of lung cancer and the changes in its distribution according to histological types in China. This study provides a scientific basis for the prevention and treatment of lung cancer.

The data for this study were obtained from Peking University Cancer Hospital (Another name of this hospital is Beijing Cancer Hospital), which is an academic tertiary cancer hospital in northern China. The hospital is one of five institutes of National Key Discipline (oncology) in China and is also the Key laboratory of Carcinogenesis and Translational Research (Ministry of Education of China/Beijing Municipality). Cancers treated include lung cancer, breast cancer, stomach cancer, colorectal cancer, esophageal cancer, liver cancer, thyroid cancer, cervical cancer, and other tumors frequently occurring in China. Over 80% of patients come from regions of north China, including Beijing, Hebei Province, Inner Mongolia Autonomous Region, Liaoning Province and Shanxi Province. Therefore, the characteristics of the patients admitted to Peking University Cancer Hospital are representative of those of patients in northern China. A total of 3,733 patients with lung cancer patients undergoing surgery were treated between January 2000 and December 2013, and in all patients a pathological diagnosis was made.

The data of patients with lung cancer treated between January 2000 and December 2013 were obtained from the Hospital Information Management System of Peking University Cancer Hospital. The inclusion criteria were (I) newly diagnosed and surgery performed at Peking University Cancer Hospital; (II) clear pathological diagnosis by surgery or puncture, bronchoscopy, thoracoscopy, sputum cytology. The exclusion criteria were as follows: (I) incomplete clinical or pathological data; (II) multiple hospitalizations and repeated information; (III) the primary tumor was not lung cancer and the participant had a secondary lung cancer; (IV) computed tomography (CT) scan of the chest suggested the possibility of lung cancer, but it was difficult to exclude other lung diseases, such as pneumonia, tuberculosis, and lung abscess. The cases of lung cancer in this study were categorized into 6 groups, according to the 2004 WHO histological classification of lung cancer (17), as follows: SQ, ADC, large cell carcinoma (LCC), adenosquamous carcinoma, small cell carcinoma (SCC) and others, which included carcinoid tumor, carcinomas of salivary gland type, and precancerous lesions.

EXCEL2007 software was used to construct a database and the data were filtered, sorted, and summarized. SPSS statistics software 19.0 (SPSS, Inc., an IBM Company, Chicago, IL, USA) was used for statistical description and statistical analysis, including the descriptive analysis of the data between 2000 and 2013, the comparative analysis of variables derived from the 2000–2006 data and the 2007–2013 data. The count data analysis, trend analysis, and correlation analysis were performed using the chi-square test or chi-square test for trend, the Cox-Stuart trend test, and the Spearman correlation, respectively, and comparison between measurement data used t-test. A value of P<0.05 indicated that the difference was statistically significant. 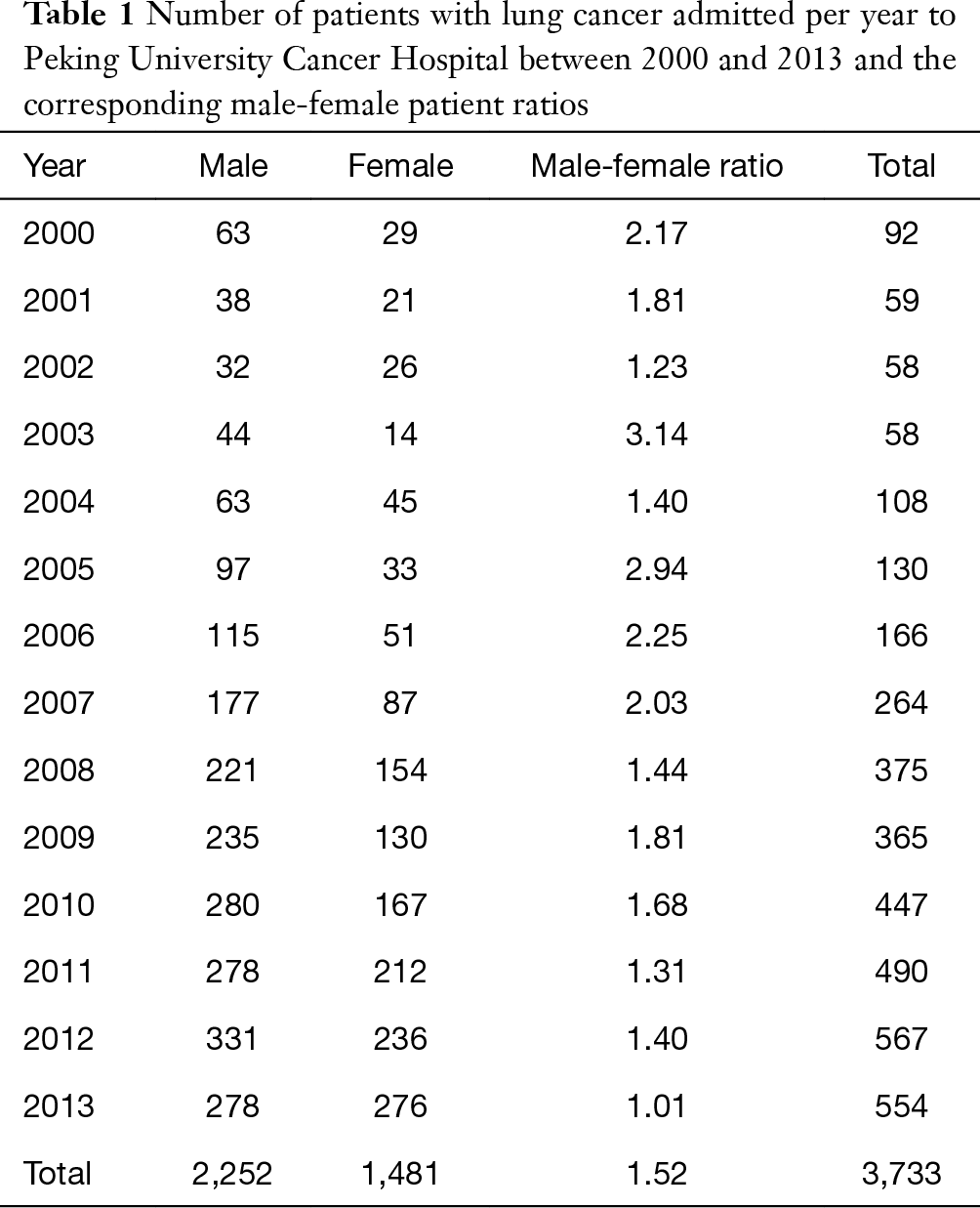 Figure1 Trends in the number of cases in 3,733 lung cancer patients undergoing surgery. 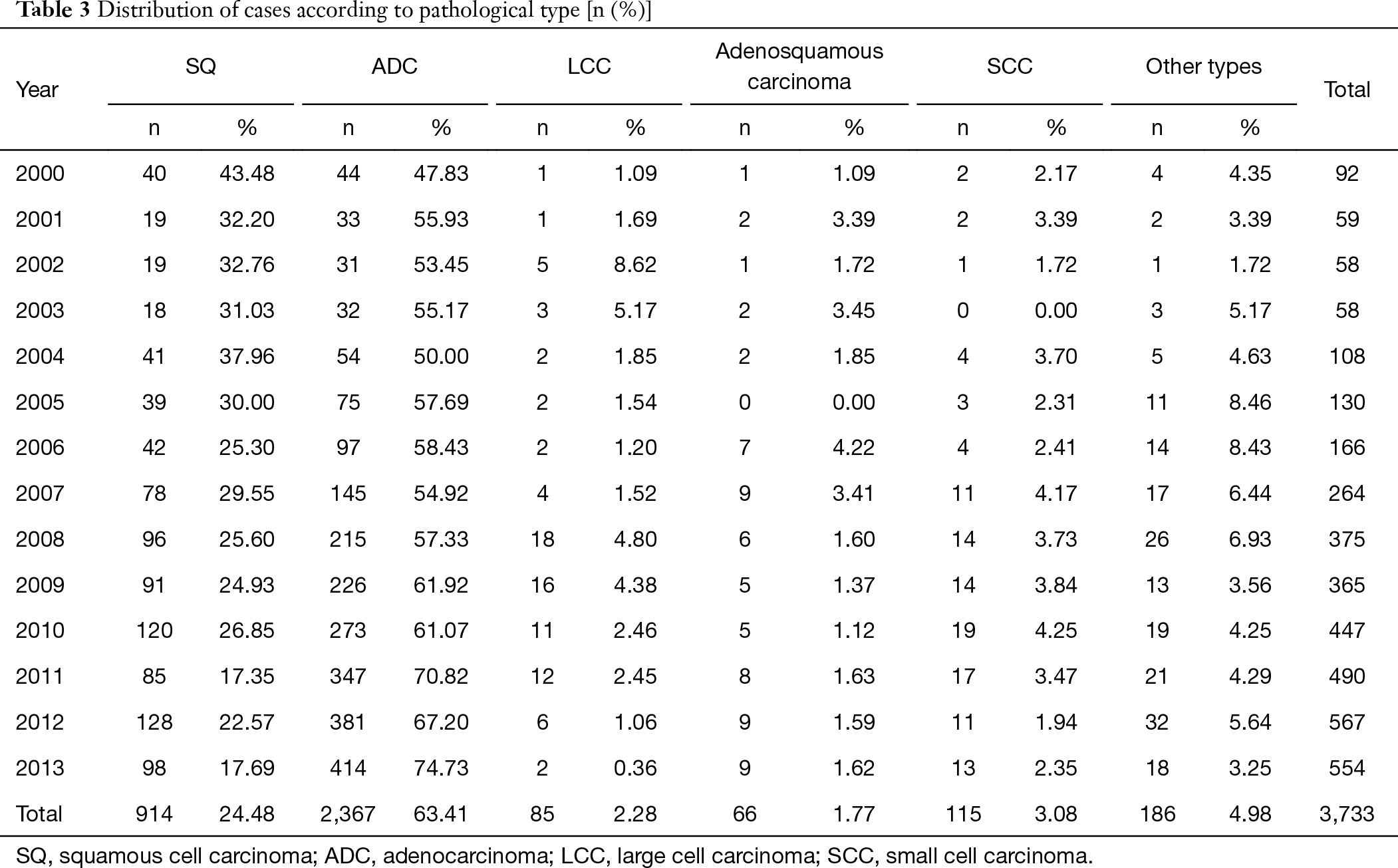 Distribution of the pathological types according to sex 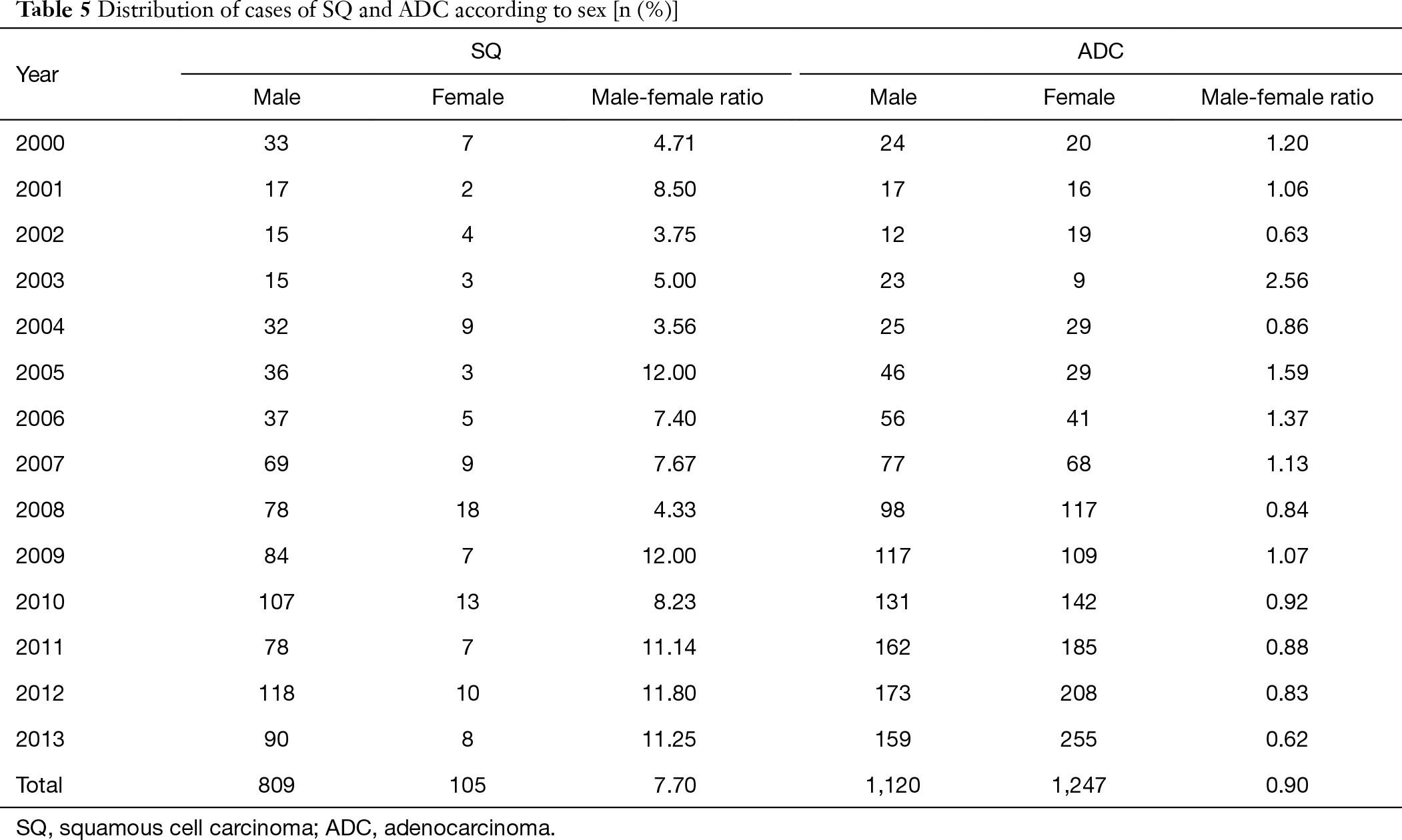 Age distribution of the pathological types

Changes were observed in the age distribution of the different pathological types of cancer (χ2=94.332, P<0.001), SQ and ADC most frequently occurred in the 60–74 years age group, while SCC occurred more frequently in the 45–59 years age group. Details of the pathological type of cancer according to age are presented in Table 7. Comparison between the 2000–2006 and 2007–2013 periods revealed that there were no changes in the average age of onset of ADC, SQ, and SCC among both male and female patients (Table 8).

Table 8 Comparison of the age of onset of SQ, ADC, and SCC between male and female patients
Full table

Lung cancer is a disease that severely threatens human health and social development. The GLOBOCAN2012 Cancer Report (3,18) released by the International Agency for Research on Cancer (IARC) shows that in 2012, approximately 1.8247 million new cases of lung cancer were predicted globally with 1.5899 million deaths. Lung cancer accounted for 12.95% of all new cases of malignant tumors and 19.38% of all deaths due to malignant tumors, and both were ranked highest. The number of new cases of lung cancer and the mortality rates among female lung cancer patients were significantly lower than those among men. In China, lung cancer has the highest incidence and mortality rate among all cancers, specifically, it has the highest incidence and mortality rate among men and the second highest incidence (after breast cancer) and the highest mortality rate among females (5). The survey showed that the incidence of lung cancer in Chinese cancer registration areas showed an increasing trend between 1989 and 2008 and that while the incidence increasing among both sexes, greater increases were observed among women. The male-female ratio among patients with lung cancer decreased from 2.47 in 1989 to 2.28 in 2008 (4). In this study, the clinical data of 3,733 newly diagnosed patients with lung cancer undergoing surgery between 2000 and 2013 in a representative tertiary cancer hospital of north China (Peking University Cancer Hospital) were analyzed in order to determine trends in lung cancer over the past 10 years and provide a scientific basis for the prevention and treatment of lung cancer in China.

The analysis showed that between 2000 and 2013 there was a rapid increase in the number of patients with lung cancer undergoing surgical treatment in this hospital, which reflected the rapid increase in the incidence of lung cancer reported among the Chinese population (4,5,10-12). Furthermore, there was also an association between the rapid rise of the influence of research hospitals in the field of cancer diagnosis and treatment in China. The male-female ratio of all patients was 1.52:1, although this ratio decreased from 2.17:1 in 2000 to 1.01:1 in 2013, with an increase in the incidence of lung cancer among women. Regarding the age distribution of lung cancer, this was more frequently reported among in the middle-aged and elderly population, with the highest number of cases observed among subjects aged 60–74 years. However, compared to the period 2000–2006, the proportion of patients with lung cancer aged between 45–59 years considerably increased and the proportion of patients aged between 60–74 years significantly decreased between 2007 and 2013.

This study showed that the increase in the proportion of patients admitted for ADC was mainly due to the increase in the number of female patients, who were mostly diagnosed with ADC. In recent years, there has been an increased focus on the rising incidence of lung cancer among women. In some developed countries, the incidence of lung cancer in women has exceeded that of men, and ADC has been reported to be the main pathological type of lung cancer among women (2,7). Studies have shown that environmental pollution, cooking fumes, passive smoking, a family history of cancer, and increases in economic income, as well as social and psychological stress, are strongly associated with the development of ADC in women (2,3,5,6,24,25). These findings indicate that changes in social and environmental factors were an important reason for the increase in ADC among women, which deserved more attention.

In summary, the increase in the number of patients with lung cancer admitted for surgical treatment reflected the increasing incidence of lung cancer in China. The most frequent histological types of lung cancer were ADC, SQ, and SCC. However, over the years, the distribution of pathological types changed significantly. The proportion of patients admitted with SQ showed a downward trend while that of patients admitted with ADC showed an upward trend. In particular, the proportion of female patients with ADC increased. However, this single institute study may not fully represent the lung cancer status of the whole region in China.

But anyway, it is anticipated that the detection rates of early lung cancer will be higher with the implementation of routine medical examination and improvements in modern diagnostic and treatment technology for lung cancer, particularly, the use of low-dose spiral CT in screening programs (10,26,27). Therefore, increasing numbers of patients with lung cancer will be able to undergo surgery. It is important to promote health education, disseminate knowledge of prevention and treatment of lung cancer, and raise public awareness of regular physical examination, to improve the early diagnosis of lung cancer.

Ethical Statement: The study had been examined and certified by Ethics Committee of Beijing Cancer Hospital (2017-031).