A 45-year-old female was admitted to our hospital due to dyspnoea and underwent ventilator care for necrotising pneumonia on the day of admission. However, the pneumonia progressed to acute respiratory distress syndrome, for which she underwent veno-venous extra-corporeal membrane oxygenation on day 1 until day 8 post-admission. On day 12, both chest computed tomography (CT) and a tracheostomy were performed. The chest CT findings were consistent with necrotising pneumonia with para-pneumonic effusion; the innominate artery was normal (Figure 1A). The patient was weaned from the ventilator on day 3 after the tracheostomy and transferred to the general ward on day 31 after admission. A second chest CT performed 13 days after the tracheostomy revealed a slightly improved lung lesion and no abnormal findings around the innominate artery (Figure 1B). At the same time, aspergillosis infection was histologically confirmed in the lung and airway. A third, follow-up CT performed on day 42 post-admission showed extrinsic compression of the trachea, which had not been seen on the chest CT because it was performed without the use of contrast material (Figure 1C). 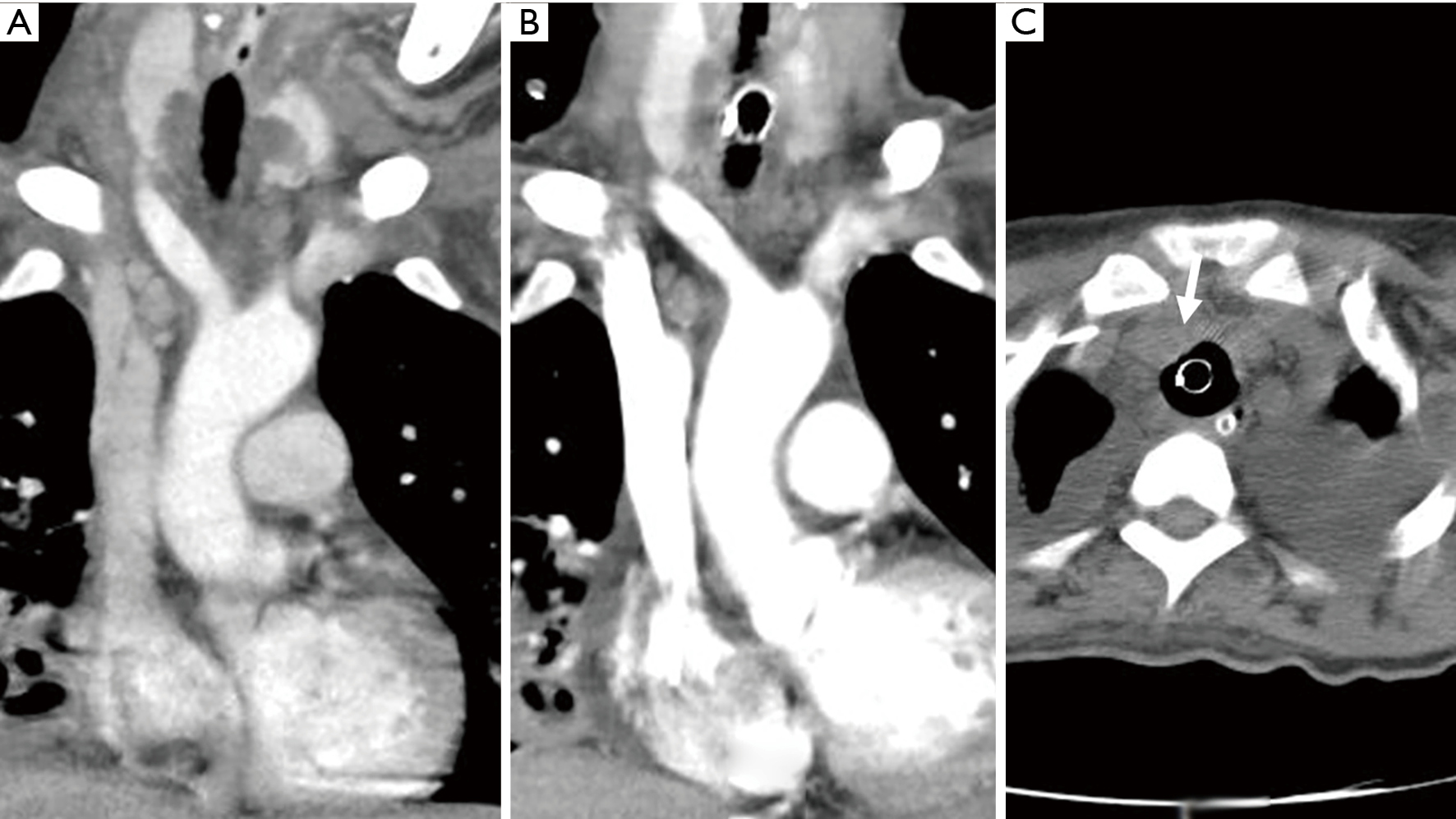 Figure 1 Chest computed tomography (CT) shows a normal innominate artery before tracheostomy (A) and on day 13 after tracheostomy (B), and extrinsic compression of the trachea (white arrow) on day 42 after admission (C).

On day 14 post-tracheostomy, sudden massive bleeding occurred at the tracheotomy site accompanied by oxygen desaturation, bradycardia and hypotension. Oral endotracheal intubation was immediately performed, followed by local compression with a Foley catheter balloon through the tracheostomy site. After the immediate bleeding had been controlled, emergency angiography revealed a ruptured pseudo-aneurysm of the innominate artery (Figure 2A). The ruptured vessel wall was sealed and reconstructed by inserting overlapping Wallgraft stents (Carotid Wallstent™ and Monorail™; Boston Scientific Corporation, Natick, MA, USA) in the innominate artery. On the second angiography there was no leakage of contrast medium (Figure 2B). After removal of the Foley catheter balloon, there was no further bleeding at the tracheostomy site and the patient was sent to the intensive care unit with stable vital signs. There, she underwent a bronchoscopy, which showed the pseudo-aneurysm, the formation of a hematoma around the aneurysm and no active bleeding focus (Figure 3A). A chest CT taken to assess the results of the intervention continued to show a 2.2-cm pseudo-aneurysm and a stent endoleak was suspected (Figure 3B). Urgent surgery for aneurysmal resection was recommended but the patient’s family refused. Massive bleeding recurred 1 day after stenting and, despite all attempts at resuscitation, the patient died. 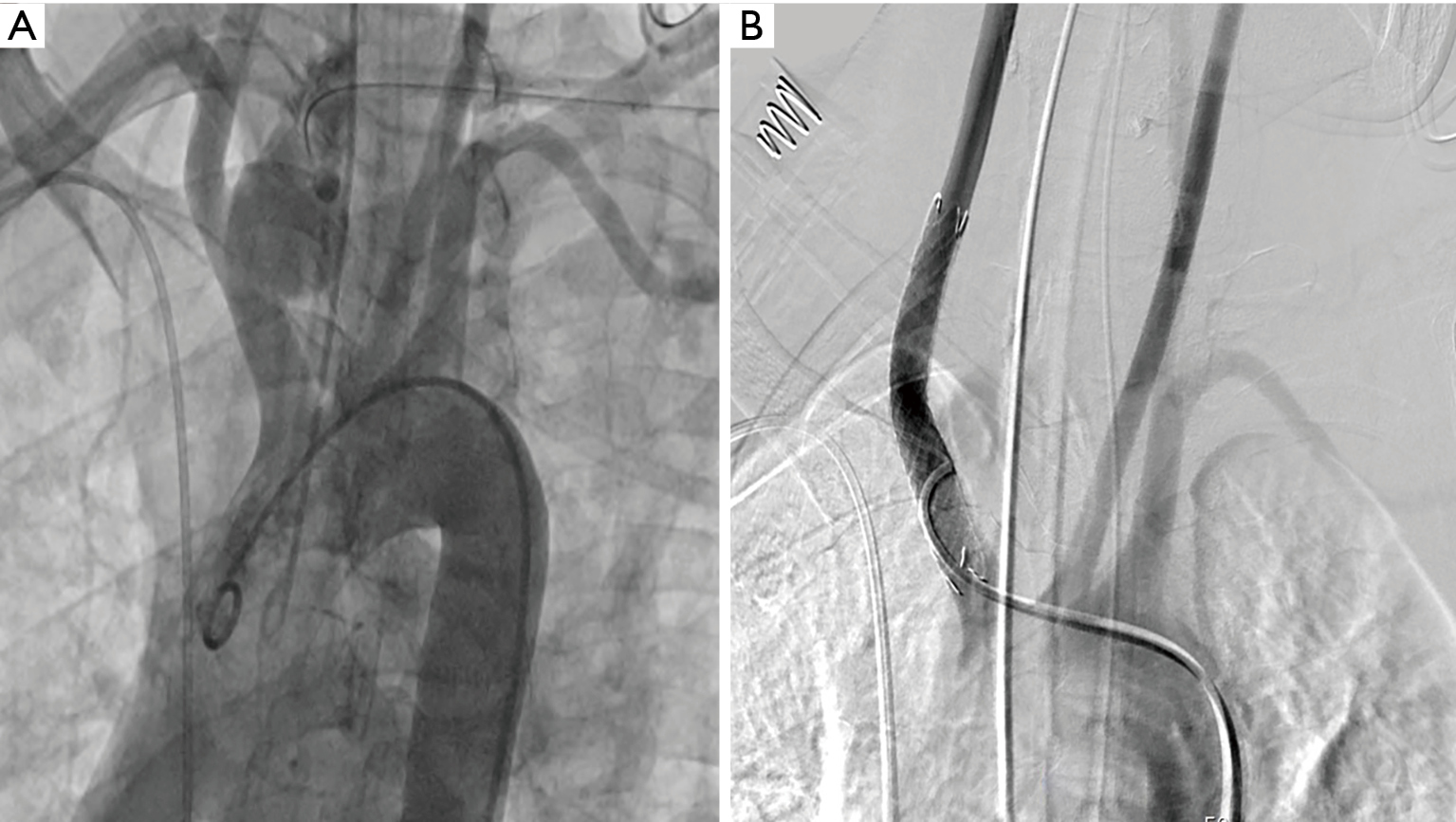 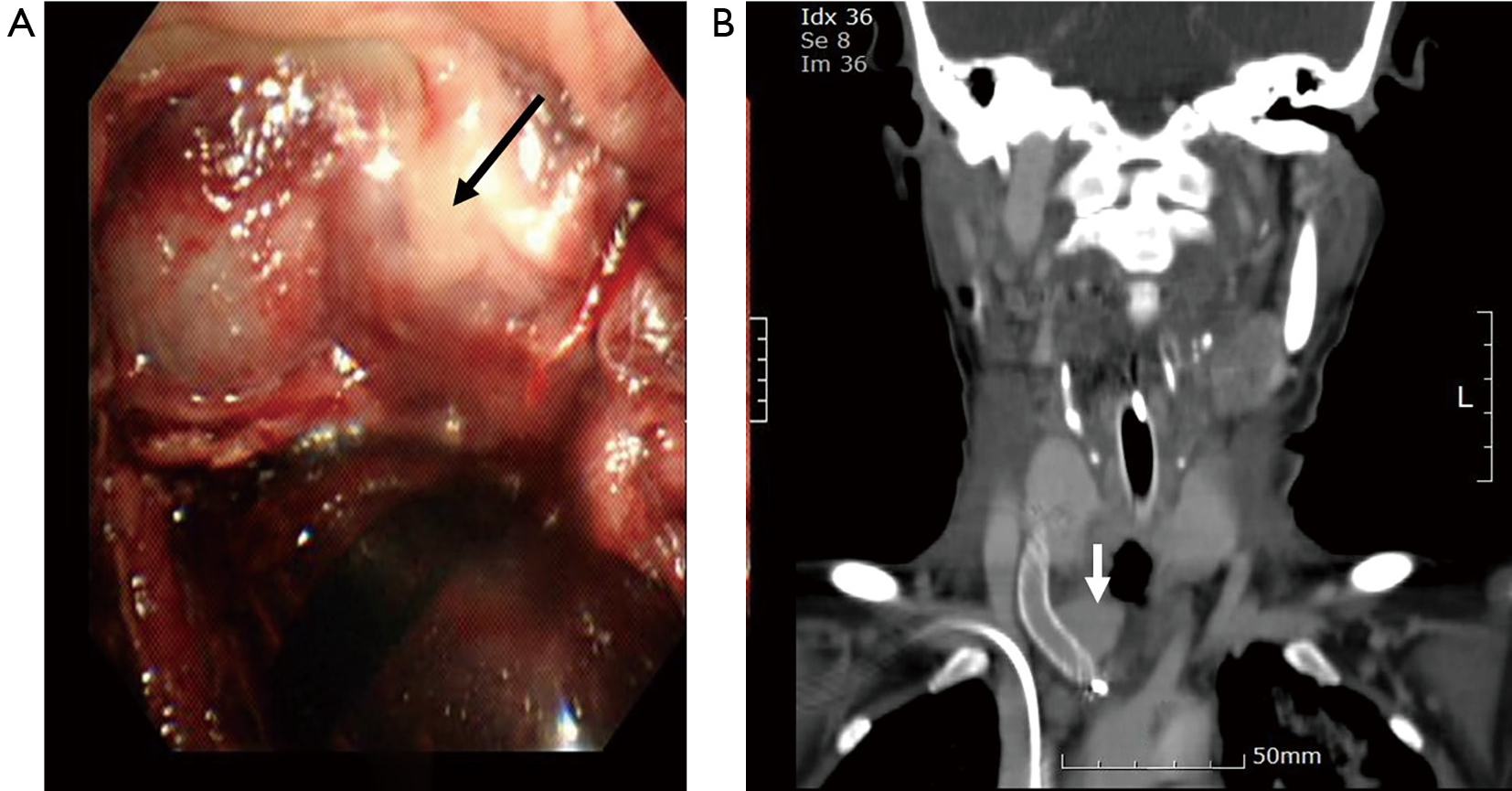 Regardless of the clinical courses of a TIF, the principles of treatment are similar. The first step is to resolve lethal bleeding with compression and the second step is to maintain ventilation. After these life-saving measures, definitive treatment is necessary to resolve the problem. In the past, surgery was considered the only treatment, but the mortality rate was >75% (1). Recently, endovascular stenting has been used as the primary treatment, although experience is still limited (3-5). In most of those cases, bleeding control was possible and the overall survival rate following treatment was at least 85%. However, considering that most of the reported cases did not involve a TIF with massive bleeding, endovascular stenting may not be superior to surgical treatment for such cases and should be considered as an alternative to surgery. In particular, an analysis of the reported complications revealed that the rate of endoleak associated with the procedure was 25%, all patients required additional stenting or surgery and 30% died during endoleak-related bleeding control efforts (6,7). Thus, although bleeding was successfully controlled by endovascular stent, delayed rebleeding occurred in >30% of these patients, and 50% of those with rebleeding died during bleeding control procedures (7).

Our patient suffered an endoleak after insertion of the stent graft and she died due to rebleeding. Based on a review of the reported literature and this case, we propose that, while stent graft insertion for patients with massive bleeding TIF enables rapid control of bleeding and stabilisation of vital signs, evidence that this approach is the optimal treatment for TIF is lacking. Thus, for now, endovascular stenting should be used as a bridge to successful surgical treatment.

This work was supported by a 2-Year Research Grant of Pusan National University.

Informed Consent: Written informed consent was obtained from the patient’s family for publication.