Acute aortic dissection (AAD) is a serious life-threatening cardiovascular disease (1,2) that frequently results in multiple organ failure, including acute lung injury (ALI) (3,4). The increased risk of ALI in patients with AAD is likely due to a high prevalence of postoperative hypoxemia, as multiple studies have shown that a decreased baseline PaO2/FIO2 ratio is an independent risk factor for postoperative hypoxemia (5-7). Preoperative hypoxemia can not only lead to poor clinical outcomes, but also may postpone surgery to prevent the occurrence of postoperative severe lung injury or acute respiratory disease syndrome (ARDS). Thus, a better understanding of the pathophysiology on the preoperative ALI in patients with AAD can improve clinical prophylaxis and/or treatments. To the best of our knowledge, however, there is no prospective study having assessed the incidence of preoperative ALI and its independent determinants before Stanford type-A AAD surgery in adult patients. In this single-center cross-sectional clinical trial, we observed the incidence of preoperative ALI in adult patients undergoing Stanford type-A AAD surgery and hypothesized that preoperative ALI could be related to clinical and experimental variables.

A single-center cross-sectional clinical trial was used to determine the incidence and factors associated with preoperative ALI in adult patients undergoing Stanford type-A AAD surgery. The study was a prospective single-center registration study and conducted in accordance with a previously described protocol (8), and it has been registered at ClinicalTrials.gov (Identifier: NCT01894334). The study was conducted in accordance with the Declaration of Helsinki, and written informed consent was obtained from all patients and/or immediate relatives.

The patients with Stanford type-A AAD (1,9) were eligible if they were between 18–75 years of age, and were suitable for emergency surgery. In the recruitment period between January 2013 and July 2014, patients undergoing Stanford type-A AAD surgery at Beijing Anzhen Hospital were enrolled in this study. All of the patients had normal hepatic and renal function. Exclusion criteria included patients with coronary heart disease, severe heart failure, severe cardiac tamponade and severe nervous system abnormalities. Patients prescribed non-steroidal anti-inflammatory drugs or corticosteroids before or after admission were also excluded [available in the inclusion and exclusion criterion in a previously described protocol (8)].

As previously described in the protocol (8), after routine anesthesia and intubation, ALI was identified according to oxygenation index (OI) calculated by PaO2/FiO2 ratio (12), and all the patients were divided into two groups: non-ALI (OI >300 mmHg) and ALI (OI <300 mmHg).

After intubation, the patient’ lungs were mechanically ventilated 10 minutes with a FiO2 100% oxygen, a 5-cmH2O positive end-expiratory pressure (PEEP) and the end-tidal carbon dioxide pressure was maintained at between 35 and 45 mmHg by adjusting tidal volume of 6 to 8 mL/kg and respiratory rate of 10 to 15 beats/min. Then, OI was calculated by arterial blood gas analysis.

All of the evaluations were performed and interpreted by an independent expert investigator who was blinded to the initial ALI adjudication. This study protocol was also blinded to patients, serum measurement inspectors, and data statisticians. The data were collected by investigators using collection plans noted in a previously described protocol (8).

All the data analysis was performed with Empower Stats software (www.empowerstats.com, X&Y Solutions, Inc. Boston, MA, USA) and R software (http://www.R-project.org). Quantitative variables are presented as mean ± standard deviation or median (interquartile range, IQR) and categorical variables as frequencies or percentages. The normally distributed continuous variables were compared by the two-tailed Student t test. Wilcoxon rank sum tests were used for intergroup comparison when parametric data were not normally distributed. The categorical data were compared using Pearson Chi-squared test or Fisher’s exact, as appropriate. Correlations were assessed using Pearson correlation or Spearman’s rank correlation. Variables associated with pre-ALI, which had a P value <0.10, were selected for univariate analysis. Univariate and multiple logistic regression analyses were used to determine the independent factors of preoperative ALI, and estimate the odds ratios and their corresponding 95% CI. Smoothing spline plots of independent factors related to preoperative ALI were created and the threshold effect analysis of independent factors on ALI was performed. P<0.05 was considered to be statistically significant. Receiver operating characteristic (ROC) curves were used to determine the power of multivariable logistic regression model for pre-ALI, and the area under the ROC curve (AUROC) was calculated to assess the discriminative ability of the identified factors for pre-ALI. 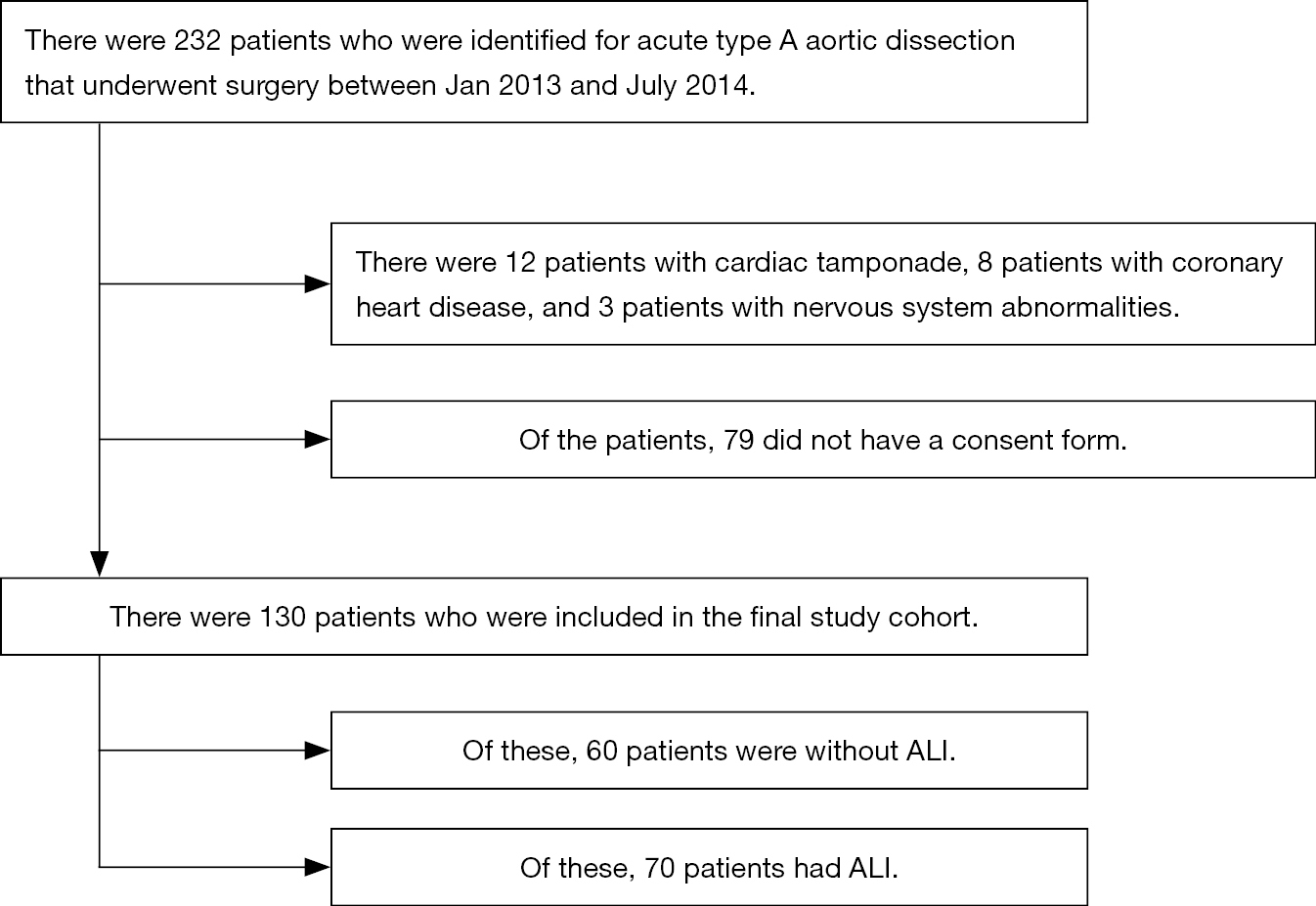 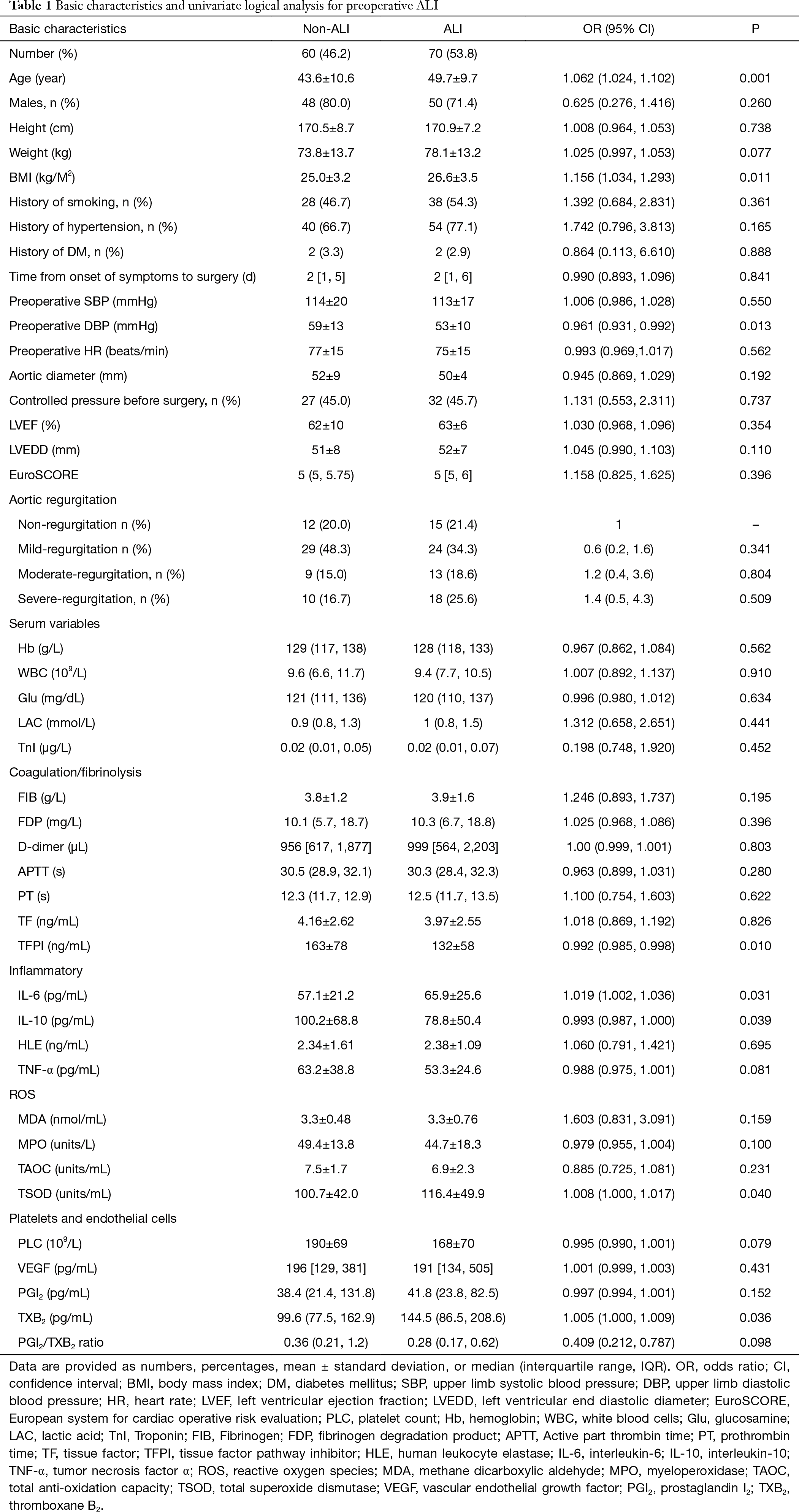 In univariate analysis, 10 preoperative variables, including age, BMI, DBP, platelet count (PLC), TFPI, IL-6, IL-10, TNF-α, TSOD, and PGI2/TXB2 ratio, were associated with preoperative ALI (Table 1). Then, these variables (plus smoking history and aortic regurgitation) were put into the multiple logistic regression analysis, and age, BMI, DBP, IL-6, and PGI2/TXB2 ratio were again shown to be significantly associated with preoperative ALI with or without adjusting for factors (Table 2). Pre-ALI was also consistently related to the tertiles of BMI, age, IL-6, and pre-DBP dose-dependently in the multivariate regression model (Table 2). Receiver-operator characteristic (ROC) curve for the multivariable predictive model of preoperative ALI in patients with AAD was present in Figures S2. 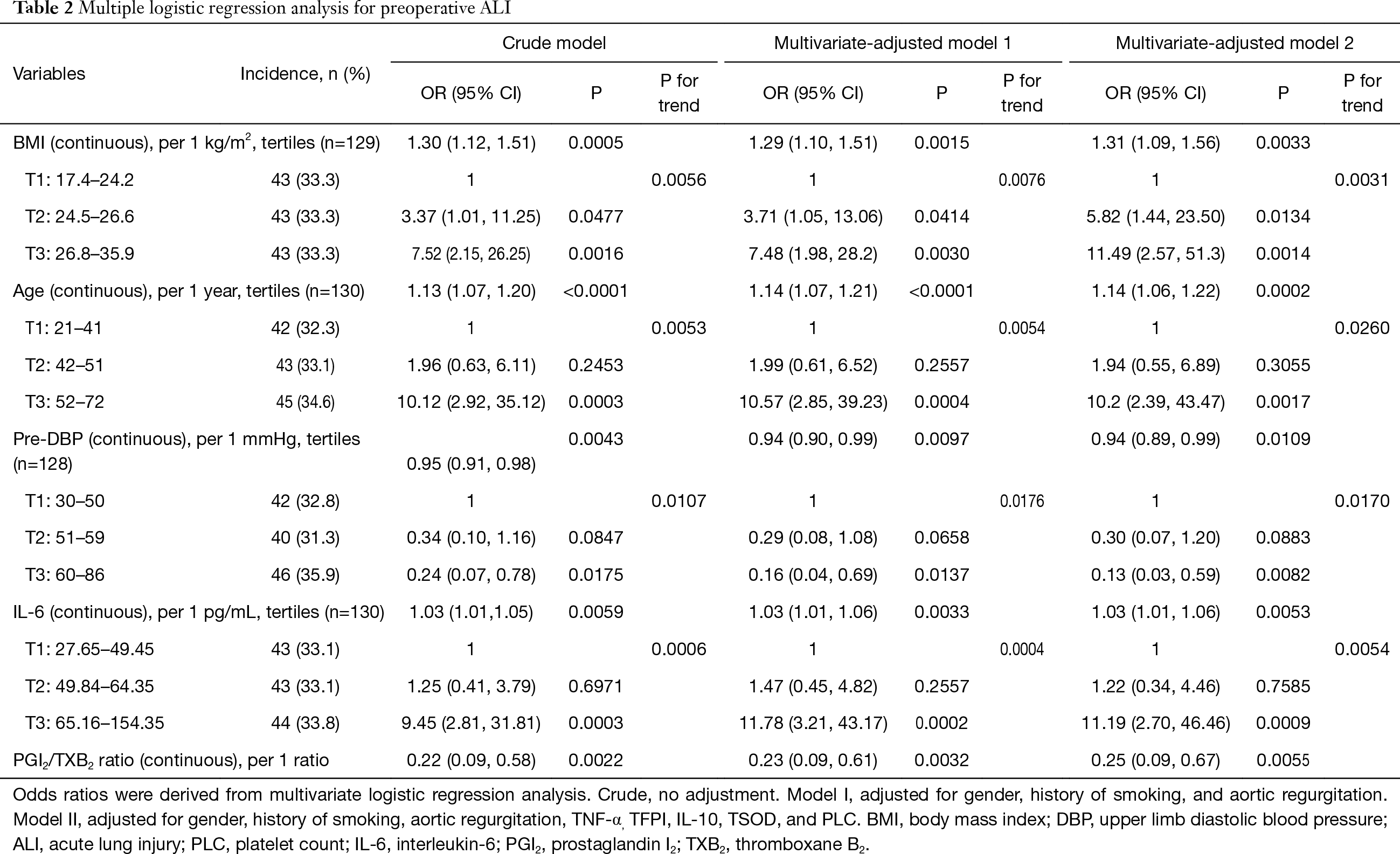 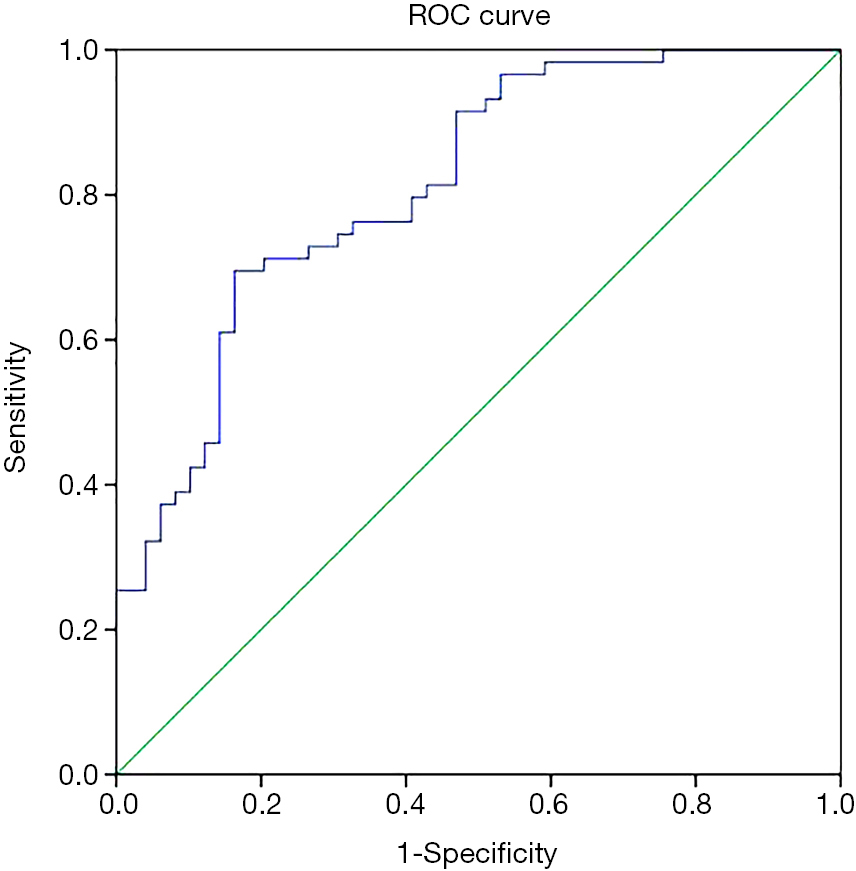 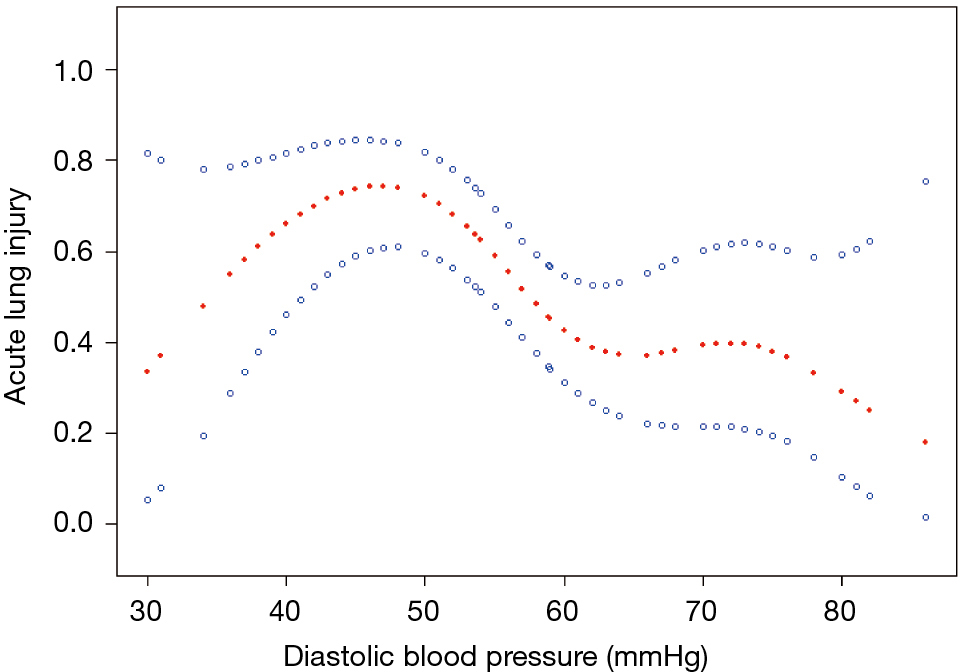 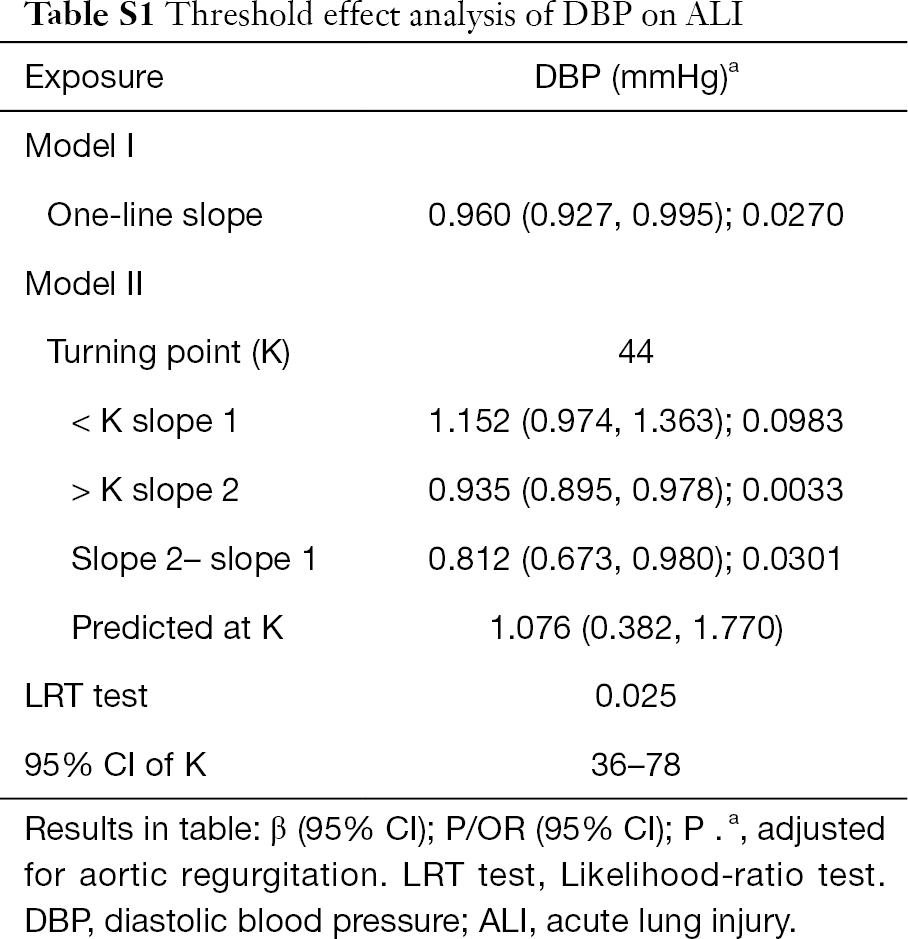 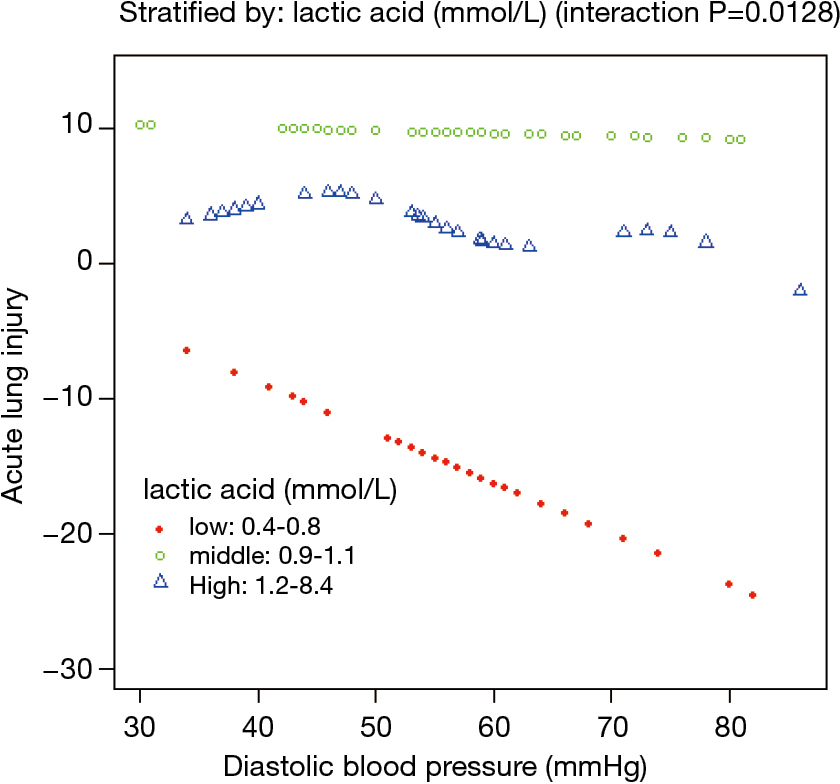 In sensitivity analysis, main results were not changed using a computer simulation method. Model discrimination was estimated by the ROC curve, and calibration was assessed by bootstrapping with 1,000 replications of individuals sampled with the replacement. Total subjects were divided into two parts, with 75% of cases as modeling data and 25% of cases as validation data, and the AUC (95% CI) for validation data was 0.783 (0.607–0.958, P<0.001) (Table S2). To verify the relationship between blood pressure and ALI, we replaced DBP with lower limb DBP. There was a significant difference in the value of lower limb DBP (58±16 vs. 52±12, P=0.041), but not in the value of lower limb SBP (100±25 vs. 96±25, P=0.395) between the non-ALI and ALI groups. Lower limb DBPs were then put into univariate and multiple logistic regression models (Table S3). Our main results were consistent with the results of DBP.

Table S2 Model calibration by bootstrapping with 1,000 replications of individuals sampled with the replacement
Full table

In this prospective single-center clinical trial including a sample of 130 adult patients undergoing Stanford type-A AAD surgery, the incidence of preoperative ALI was up to 53.8%, indicating that about half of AAD patients experience preoperative ALI. This finding is consistent with the incidence of preoperative ALI in patients in previous reports (13,14). A retrospective study from Japan showed that oxygenation impairment occurred in 51% of the patients with distal type AAD within 24 h from the onset (13), while a retrospective study from China revealed that 78.49% of the patients undergoing Stanford type-A AAD surgery had the preoperative hypoxemia (14).

This study showed that older patients had a higher risk of morbidity due to preoperative ALI after the onset of AAD. Aging increased the risk of thrombotic and inflammatory disorders and intrinsic platelet activation, aggregation, and secretion (15), which were negatively correlated with PLC (r=−0.261, P=0.003). Obese patients may have alterations in pulmonary mechanics to develop ARDS (16,17), and an overproduction of proinflammatory adipokines (18), which was independently associated with morbidity of preoperative ALI. Our data add to the previous publications by showing that age and BMI were related to preoperative ALI in adult patients with AAD.

The AAD mechanism comes from many sources (1,19,20), and recent research has shown that inflammation plays an important role in aortic dissection (21-23). Thus, pulmonary microcirculation is a natural reservoir of leukocytes (24), and is prone to be injury (25). In our study, as we mentioned previously, serum IL-6 was significantly higher in the ALI group, which was an independent factor associated with preoperative ALI in patients with AAD. These data clinically demonstrated that systemic activation of the inflammatory system after AAD plays a key role in the development of ALI.

Platelets also play a crucial role in the pathogenesis of ALI (26), which is activated by AAD to release pro-inflammatory mediators, such as TXA2 (27). As previously reported (3,28,29), Platelets count is reduced in unruptured abdominal aortic aneurysms, and low platelet counts on admission can also predict the increased risk of in-hospital mortality in patients with type A AAD. TXB2 is a stable metabolite of TXA2 (30). In this study, PLC was negatively correlated with TXB2 (r=−0.218, P=0.018). Our results indicated that after the onset of AAD, the production of TXB2 by aggregated platelets was increased in the ALI group, while the balance of the PGI2/TXB2 ratio was interrupted (31). Therefore, the imbalance of the PGI2/TXB2 ratio was an independent factor associated with ALI.

Interaction analysis revealed that LAC level played an interactive role in the association between DBP and ALI. When serum LAC level was less than 0.8 mmol/L, a higher DBP would occur and a lower incidence of ALI was noted. Hyperlactatemia is probably a result of both the higher production and lower clearance of LAC due to the pathologic process (32,33). The origin of hyperlactatemia before AAD surgery is multifactorial, and ischemia and reperfusion are important contributors. A lower LAC level indicates a balance of tissue oxygen supply and consumption, in which elevated DBP can improve pulmonary oxygenation by enhancing tissue perfusion and decreasing ischemia and systemic inflammatory response. However, hyperlactatemia indicates a severe unbalance of tissue oxygen supply and consumption, in which elevated amount of DBP cannot compensate such severe unbalance. Our findings suggested that aggressive management to increase DBP and to maintain nearly normal plasma LAC level would be related to decreased risk of ALI before AAD surgery.

In patients with AAD, non-pulmonary factors, including congestive heart failure, can contribute to poor oxygenation. In our study, we excluded patients with left ventricular systolic dysfunction and we also controlled for aortic regurgitation to rule out the contribution of non-pulmonary factors in our results, but our findings persisted. Vasodilators, such as sodium nitroprusside, also reduced PaO2 by increasing ventilation-perfusion mismatching and shunt fraction. However, sodium nitroprusside was used to control systolic blood pressure in 45% of the patients in this study, but both groups were similar in terms of the use of sodium nitroprusside (45% vs. 45.7%). Thus, the use of vasodilators was not an independent factor of oxygenation impairment in this study.

First, this study was only conducted at one medical center, and the number of cases was comparatively small for a relatively short period of patient recruitment. Therefore, a large cohort study is still needed to determine the risk factors of preoperative ALI in the adult patients undergoing Stanford type-A AAD surgery. Second, there was the lack of specificity marker response to lung function, such as the analysis of exhaled breath condensate or specimen of the lung. Third, we were not able to obtain highly detailed information to evaluate the presence of systemic dysfunction in individual cases that required emergency surgery. Forth, while lung function may be deteriorated or improved after mechanical ventilation, OI was calculated based on the respiratory parameters of intubated patients and the score might not be in agreement with the real process. Lastly, OI was used to be equating to a positive outcome, whilst this undoubtedly accounts for the high incidence of ‘ALI’ in the study cohort. However, in ALI group, the OI value of all patients was less than 300 mmHg by having a PEEP ≥5 cmH2O, which defined as acute lung injury according to “The Berlin Definition” (12).

All of the authors would like to thank Dr. Fu-Shan Xue, Professor in Department of Anesthesiology, Beijing Friendship Hospital, Capital Medical University, Beijing, China, for his assistance during the investigation and his editorial contributions. All authors thank Prof. Jing Liu, Department of Epidemiology, Beijing Anzhen Hospital, Capital Medical University, Beijing Institute of Heart Lung and Blood Vessel Diseases, Beijing, China, for her kind assistance during the conduct of the statistical analysis and editorial contributions. We also thank LetPub (www.letpub.com) for its linguistic assistance during the preparation of this manuscript.