Chronic obstructive pulmonary disease (COPD) is common, preventable and is characterized by persistent respiratory symptoms and airflow limitation caused by airway and/or alveolar abnormalities usually due to significant exposure to noxious particles or gases (1). COPD is presently the fourth leading cause of death worldwide, and it may become the third leading cause by 2020 (2). Therefore, prevention and treatment of COPD are important public health challenges. Treatment with inhaled corticosteroids (ICSs) in COPD can reduce the frequency of exacerbations (3). However, the long-term safety of ICS use in patients with COPD is still unknown and requires further, well-designed studies (4). Results from withdrawal studies have provided equivocal results of outcomes (including lung function, symptoms, and exacerbations). Some studies have shown an increase in exacerbations and/or symptoms after ICS withdrawal, while others have not. The aims of this study were to determine the effects of ICS withdrawal through a systematic review of randomized controlled trials (RCTs) and a comparison of their findings with those of “real-life” studies, which were practical and non-interventional studies, and to explore the reasons for different results among RCTs.

Data extraction and assessment of risk of bias

Two authors independently evaluated the studies based on titles and abstracts and then reviewed the full text of papers considered to be potentially includable to confirm inclusion/exclusion. Data from each included trial were extracted independently by two authors. Outcomes extracted included: changes in the forced expiratory volume in the first second (FEV1), exacerbations, quality of life, and changes in symptoms and exercise capacity. Authors used the risk of bias table to assess the methodological quality of trials, which included the method of random sequence generation, allocation sequence concealment, blinding for performance, incomplete outcome data, selective outcome reporting, and other sources of bias according to the Cochrane Handbook of Systematic Reviews (5). Discrepancies and disagreements were resolved among the authors by discussion.

Figure 1 shows a flowchart describing our study selection process. The electronic search identified 4,823 publications of which 4,559 were excluded based on their titles and abstracts, and 255 were excluded because they did not compare patients withdrawn and not withdrawn from ICS or they were not RCTs. Finally, five RCTs were located (6-10). Moreover, we located two “real-life” studies that examined the effects of ICS withdrawal in patients with COPD (11,12). Figure 2 shows a graph and summary of the risk of bias assessment. Table 1 shows the characteristics of the five RCT trials and the two “real-life” studies. Outcomes differed among trials, as did outcome definitions (for the exacerbation definitions used in each study, see Table 2). Outcome data were either not reported or not reported clearly in at least one trial. In addition, there were differences in patient characteristics and duration of ICS use among trials. Therefore, we could not perform a meta-analysis for these trials. 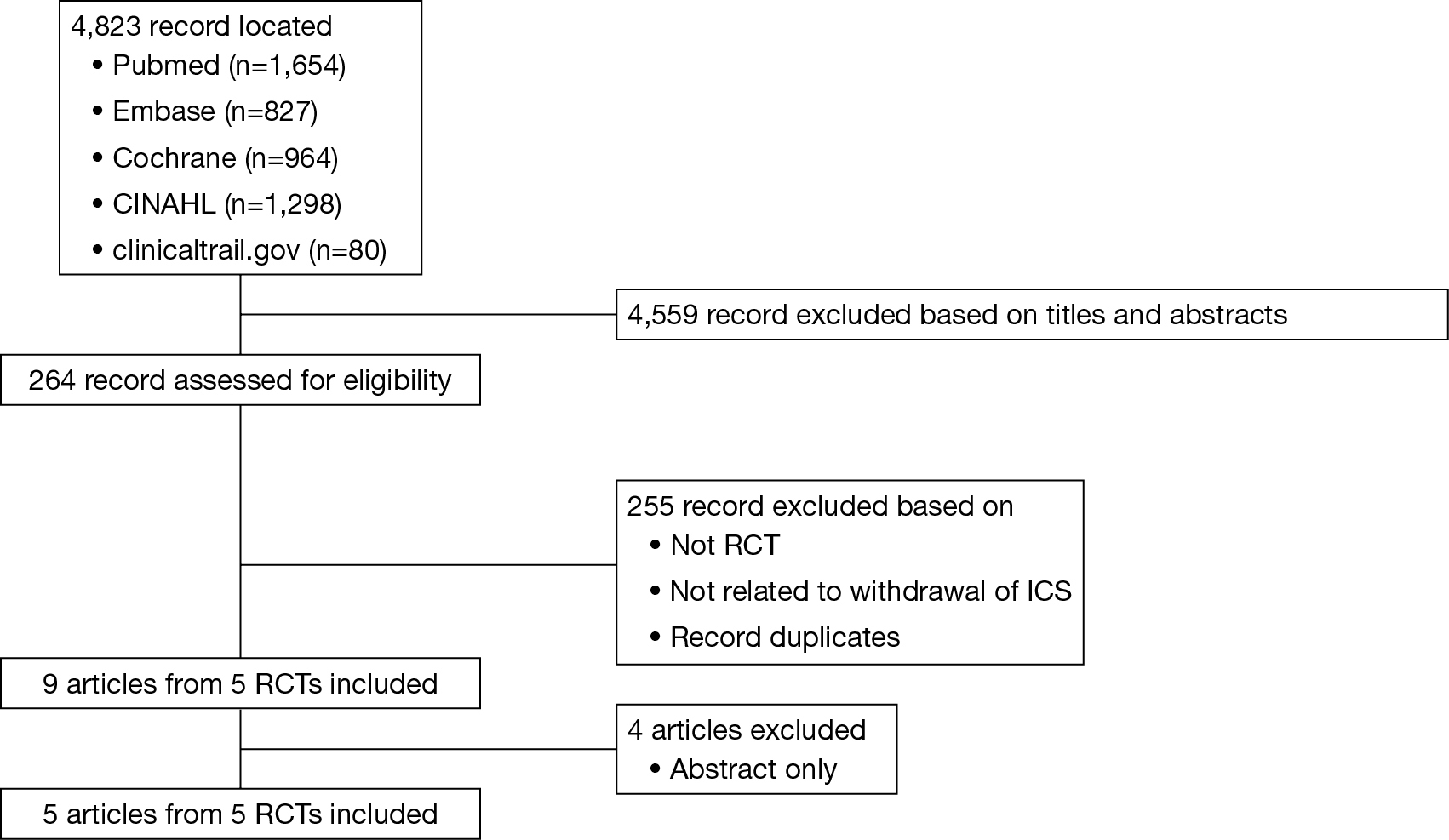 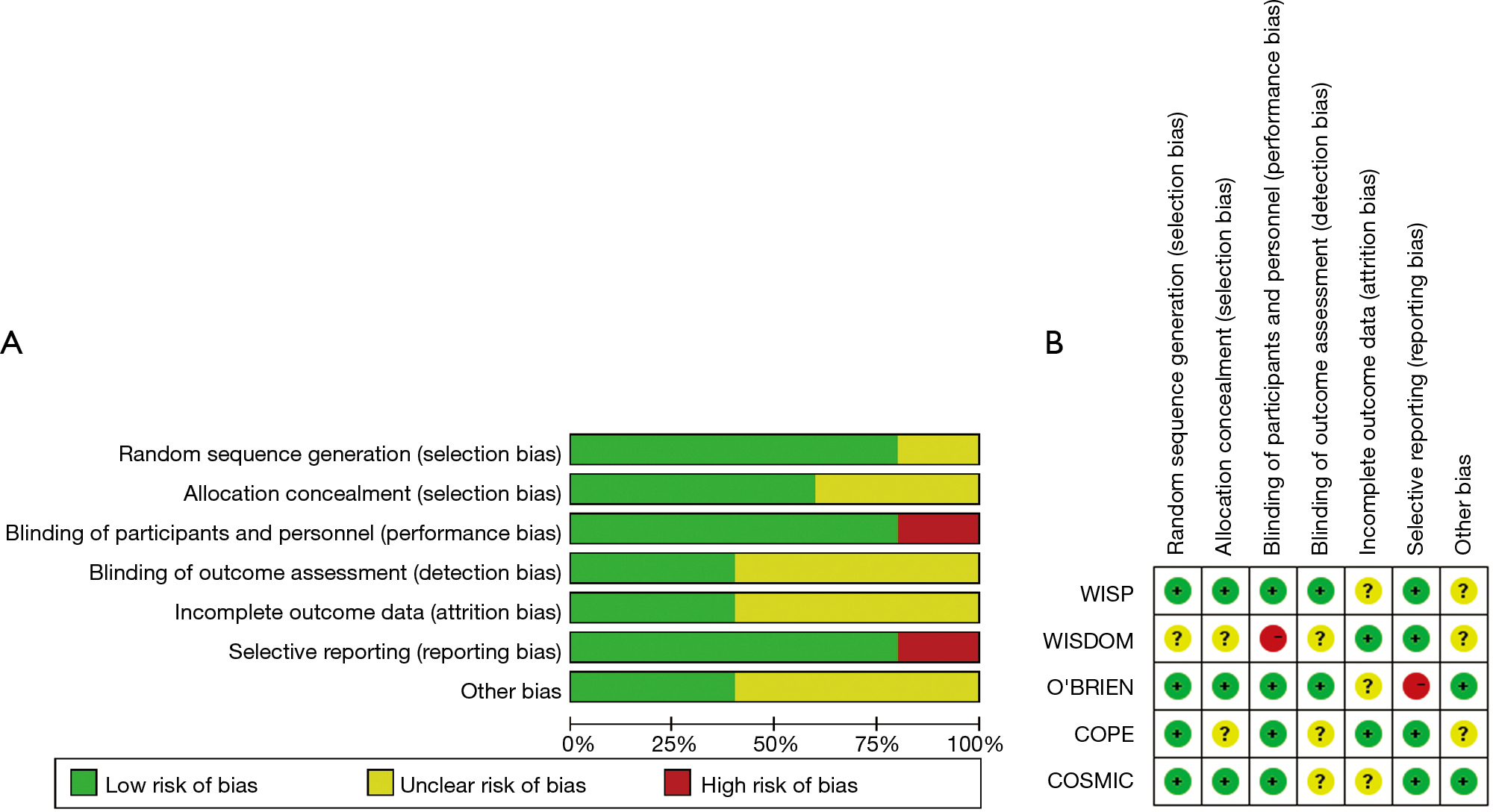 Figure 2 Risk of bias assessment for the randomized controlled studies. 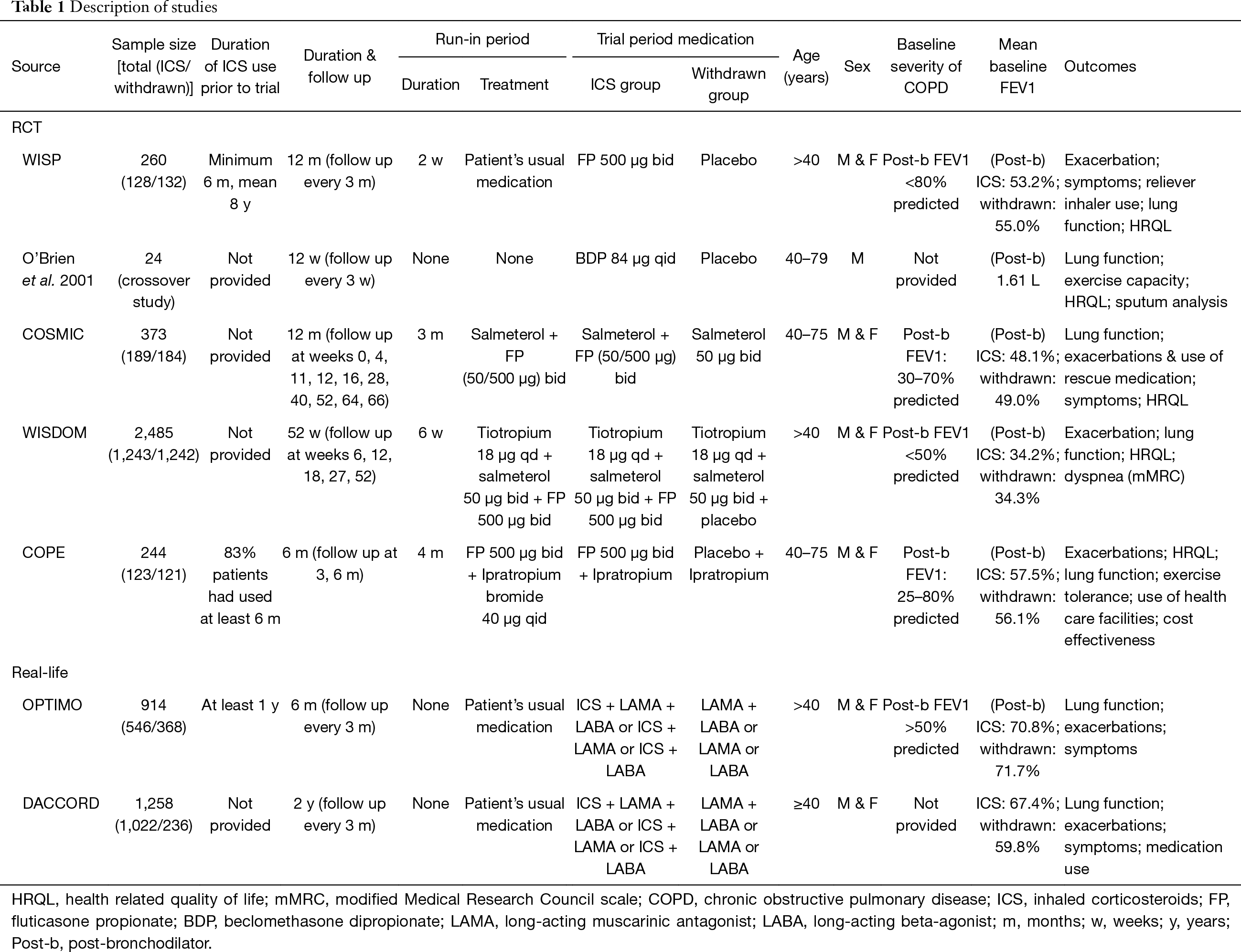 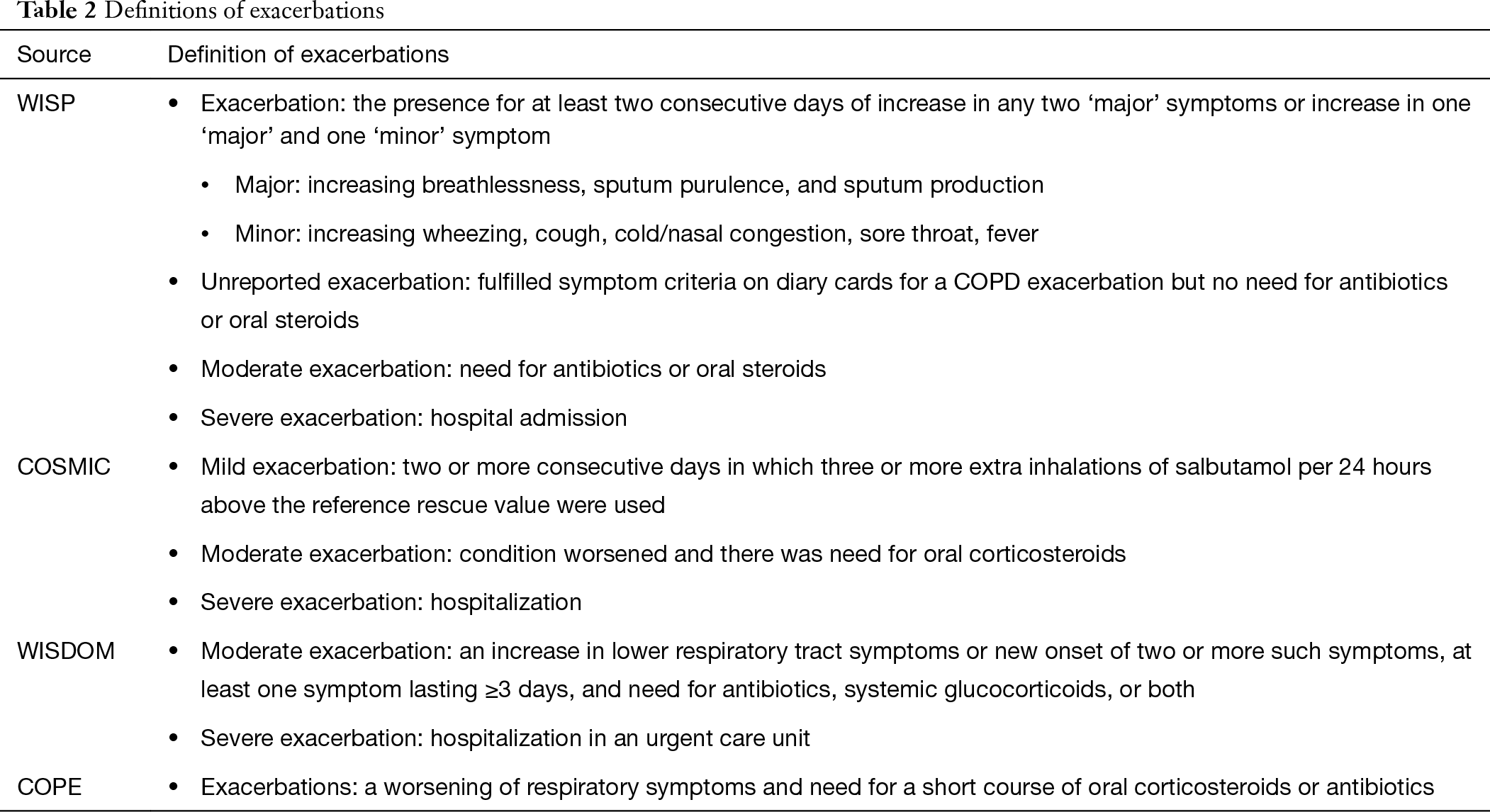 Exacerbation was reported as an outcome in four out of five RCTs. Only one study (9) showed that the risk of exacerbation in patients with COPD did not increase after ICS withdrawal, while three studies (6,7,10) indicated that there was difference in exacerbations after ICS withdrawal. WISP (7) showed that patients who receiving placebo experienced an exacerbation on average 19 days earlier than those who received ICS treatment [median =44 (CI, 29–59) vs. 63 (CI, 53–74) days, P=0.05], and those patients were more likely to return to using their usual ICS following exacerbation, [placebo: 48% vs. fluticasone: 26%, OR: 2.35 (CI, 1.38–4.05)]. COSMIC showed that withdrawal of fluticasone propionate (FP) in patients with COPD using salmeterol/fluticasone (SFC) resulted in an increase in mild exacerbations (mean annual incidence rate:1.3 vs. 0.6, P=0.020). COPE (10) indicated that discontinuation of FP in patients with COPD could lead to a more rapid onset and higher risk of exacerbations. The mean difference in time to first exacerbation was 34.6 days (95% CI, 15.4–53.8), 75.2 days in the FP group and 42.7 days in the placebo group, which favored FP use. Twenty-one-point-five percent of patients in the placebo group experienced rapid recurrent exacerbation, as opposed to only 4.9% in the FP group (RR: 4.4; 95% CI, 1.9–10.3). WISDOM (9) suggested that the risk of moderate or severe exacerbations did not differ between those who discontinued and those who continued ICS use among patients using tiotropium plus salmeterol.

Change in ventilation function from baseline was observed in all five trials. FEV1 was the main parameter measured in the trials. Decrease in lung function from baseline was found in the withdrawal group in four trials, but only three trials found a statistically significant difference. In COSMIC (6), patients withdrawn from ICS use had a sustained deterioration in FEV1(mean change from baseline 24.4% vs. 20.1%, P<0.001).When ICS withdrawal was complete, and at week 52 in WISDOM (9), the reduction from baseline in FEV1 was found greater in the withdrawal group than in the ICS continuation group (38 mL greater when withdrawal was complete, P<0.001; 43 mL greater at week 52, P=0.001). O’Brien (8) demonstrated that there was a significant decrease in FEV1 using the placebo inhaler in elderly patients with severe irreversible airway obstruction (P<0.05).An almost statistically significant difference in FEV1 after bronchodilator use was observed in favor of the ICS group in COPE (P=0.056) (10). No significant difference in FEV1 was found between the placebo and ICS groups in WISP (7).

All five trials compared differences in health-related quality of life among patients with COPD using the St. George’s Respiratory Questionnaire (SGRQ), or the Chronic Respiratory Disease Questionnaire (CRQ), or the Clinical COPD Questionnaire (CCQ), or the EuroQol5D. Two trials (7,8) did not find significant changes between the placebo and ICS treatment groups, while a small but statistically significant difference in favor of the ICS group was observed in another two trials (9,10). COSMIC (6) found no significant differences in SGRQ scores between the treatment groups (P=0.47), but a higher CCQ score was observed in the salmeterol group than in the SFC group after overall adjustment (P=0.041).

Symptoms were reported as an outcome in three of the five trials. COSMIC (6) found an increase in the symptom scores for dyspnea and the percentage of disturbed nights after ICS withdrawal (P<0.001). However, the cough and sputum scores between the treatment groups had no significantly different over the whole period. Patients randomized to the placebo group in WISP (7) trial showed a significant increase in wheezing. Reporting of sputum and other symptoms were similar in both groups.

Only two (8,10) of the five trials reported exercise tolerance by using the 6-Minute Walking Test, and it was not affected by treatment withdrawal.

No differences were observed between the two groups based on FEV1, exacerbation rate, and the COPD Assessment Test in the “Real-Life study on the appropriateness of treatment in moderate COPD patients (OPTIMO)” (11). The findings of the German study DACCORD (English translation: Outpatient Care with Long-Acting Bronchodilators: COPD Registry in Germany) were consistent with those of OPTIMO; the rate of exacerbations in the two groups was similar (12).

Pharmacologic therapy for COPD is used to reduce the frequency and severity of exacerbations, relieve symptoms, and improve exercise tolerance and health status. To date, there is no conclusive clinical trial evidence that any existing medication (including ICSs) for COPD modify long-term decline in lung function (13-15). There is high quality evidence from RCTs indicating that ICS use could lead to higher prevalence of pneumonia, hoarse voice, and oral candidiasis (16). In addition, in both observational studies and meta-analyses of RCTs, increased risk of tuberculosis has been observed (17,18). Many patients with COPD use ICS treatment without a clear indication, so the impact of ICS withdrawal on COPD progression is of great interest in clinical work. There still is debate on whether patients with COPD need to use ICSs and on the optimal course of treatment.

In our systematic review, we investigated five RCT trials. The study populations mainly comprised of patients with moderate to severe COPD. Although the results somewhat differed among trials, most tended to suggest that withdrawal of ICS in patients with COPD could lead to an increased risk of exacerbations, decrease in lung function from baseline, and may cause symptom deterioration and affect patient health-related quality of life.

COPD exacerbations are defined as an acute worsening of respiratory symptoms that require additional therapy. Exacerbation was the primary outcome in almost all included trials. We consider that there were several possible reasons for the differences in exacerbation outcomes.

Therefore, for patients with COPD with mild-moderate severity and low risk of exacerbation, withdrawal of ICS maybe safe with regard to exacerbations, lung function, and even symptoms, which would avoid ICS adverse reactions, such as the occurrence of pneumonia, hoarse voice, oral candidiasis, or tuberculosis. However, patients with moderate-severe COPD could benefit from maintenance of ICS therapy. Triple inhaled therapy of ICS + LAMA + LABA can improve lung function, symptoms, and health status, and reduce exacerbations, compared to therapy with ICS + LABA or LAMA (1).

Besides, asthma may be one of the risk factors for the development of chronic airflow limitation and COPD. In a report from a longitudinal cohort of the Tucson Epidemiological Study of Airway Obstructive Disease, after adjusting for smoking, patients with asthma were found to have a 12-fold higher risk of developing COPD compared to those without asthma (23). Another longitudinal study of patients with asthma showed that about 20% developed irreversible airflow obstruction (24). In the European community Respiratory Health Survey, airway hyper-responsiveness was second only to smoking as the main leading risk factor for COPD, accounting for 15% of the risk (25). These patients might meet the diagnostic criteria for Asthma-COPD Overlap Syndrome (ACOS). ACOS is identified in clinical practice by the features that it shares with both asthma and COPD. Patients with ACOS should be treated with ICS at a low or moderate dose depending on the level of symptom severity, and LABA and/or LAMA should be added (26). Hence, some patients with COPD, especially patients with severe COPD may benefit from ICS use.

A real-life study is a practical clinical trial and is nonrandomized, open, non-interventional, and placebo-free. The location of a real-life study and the conditions of intervention are those of the actual clinical practice environment. The choice of subjects is generally not special, and the intervention could be changed at the doctor’s discretion. A real-life study cannot only reduce the limitations of traditional research, but also reflect the clinical efficacy of therapeutic drugs in the real world and provide an objective comparison basis for clinical drug selection. This shows that real-life studies emphasize real treatment, while an important flaw of RCTs is that their external validity is relatively low and their clinical promotion space is relatively small. Our research focused on the effect of ICS withdrawal on COPD, and therefore we searched for real-life studies, which more closely reflect clinical practice conditions.

To verify the safety of ICS for patients with COPD and whether to withdraw ICS treatment, specifically designed trials, such as subgroup studies, are required. Subgroup analysis can more accurately elucidate the effects of treatment plans within specific populations, and contribute to the development of individualized therapies to maximize treatment outcomes and minimize side effects. COPD is a heterogeneous disease in severity of airflow obstruction, symptoms, exacerbation risk, and comorbidities. The results of the RCTs, “real-life” studies, and of the other studies discussed suggested that therapy options should depend on patient characteristics. Subgroup analysis maybe an effective method to determine the safety and efficacy of a treatment regimen.

Through five RCTs and two “real-life” studies, we found that the effect of ICS withdrawal on patients with COPD may differ according to the definition of outcome and setting and management of patients within the trials, disease severity, use of background long-acting bronchodilator medication, and whether COPD is combined with airway hyper-responsiveness, among other factors.