Knowledge and practice of Chinese physicians toward carbapenem-resistant enterobacteriaceae: a nationwide cross-sectional survey in top 100 hospitals

Antimicrobial resistance has markedly increased worldwide concern over the past decades, while the current emergence of carbapenem-resistant enterobacteriaceae (CRE) constitutes a great public health threat (1,2). In United States, CRE infections have been confirmed in nearly all states and are associated with 25% attributable mortality (3,4). A single CRE infection can cost ranging from $22,484 to $66,031 for hospitals, $10,440 to $31,621 for third-party payers, and $37,778 to $83,512 for society (4). Because of limited antibiotic options to treat such infections, CRE is listed as a critical priority pathogen by the World Health Organization (WHO) to guide research, discovery, and development of new antibiotics (5).

In China, carbapenem-resistance of Klebsiella pneumoniae clinical strains has increased from 2.4% to 13.4% over the past decade (6), while different carbapenem resistance rate and relative prevalence of various carbapenemase genes among clinical Escherichia coli strains have been reported from different provinces of China (7,8). However, Chinese tertiary hospitals, located in different cities, not only provide high-level medical and health services, but are also responsible for medical higher education and scientific research, where the physicians’ knowledge and practice are different per definitions with respect to case mix, intensity of care provided, and other personal experience. Since the emergence of hypervirulent carbapenem-resistant K. pneumoniae isolates has been frequently documented in recent years (9-11), the concern is growing regarding urgent public health threat due to these gram-negative organisms.

As physicians are the major player in clinical treatment and hospital infection control, less attention has been focused on their general knowledge and practice toward this rapidly evolving gram-negative resistance issue. Therefore, a national cross-sectional survey was conducted in Chinese top 100 hospitals, representing the healthcare facility elite, to understand the current knowledge and practice of Chinese physicians toward CRE.

The questionnaire was self-designed after consulting a large number of published studies and was revised after experts’ evaluation. The questionnaire comprised three sections: (I) socio demographic information; (II) CRE knowledge, and (III) practice options toward CRE. The nine knowledge questions focused on the indications for CRE treatment and awareness of infection control. The four practice questions focused on the CRE treatment, high-risk factors and infection control strategy (Supplementary file).

The collected questionnaires were reviewed manually, and the missing responses were corrected or verified by re-contacting the respondents. All data were double checked and input into a database. For knowledge questions, each correct answer was given 1 score, whereas 0 score was given to wrong answers. The total scores were classified into three levels as follows: (I) high level: 7–9 scores; (II) moderate level: 4–6 scores; (III) low level: 0–4 scores.

A total of 529 physicians from 53/100 (53%) hospitals accepted and completed the questionnaires, and all responses were available for the study. The characteristics of the physicians are displayed in Table 1. The cities in which the designed hospitals were located were categorized by New Tier City Institute as first-tier cities, new first-tier cities, or second-tier cities (The detailed rank available at: https://www.cbnweek.com/articles/normal/20927). Males and females were equally represented, and the mean age of the physicians was 38.3 (SD 6.6). The proportion of physicians in Department of ICU, Department of Respiratory Medicine, Department of Hematology, and Department of Infectious Diseases was 41.0%, 26.8%, 21.2% and 11.0%, respectively. Of the 529 physicians, 195 (36.9%) had a PhD/MD degree, whereas 264 (49.9%) had a master’s degree. 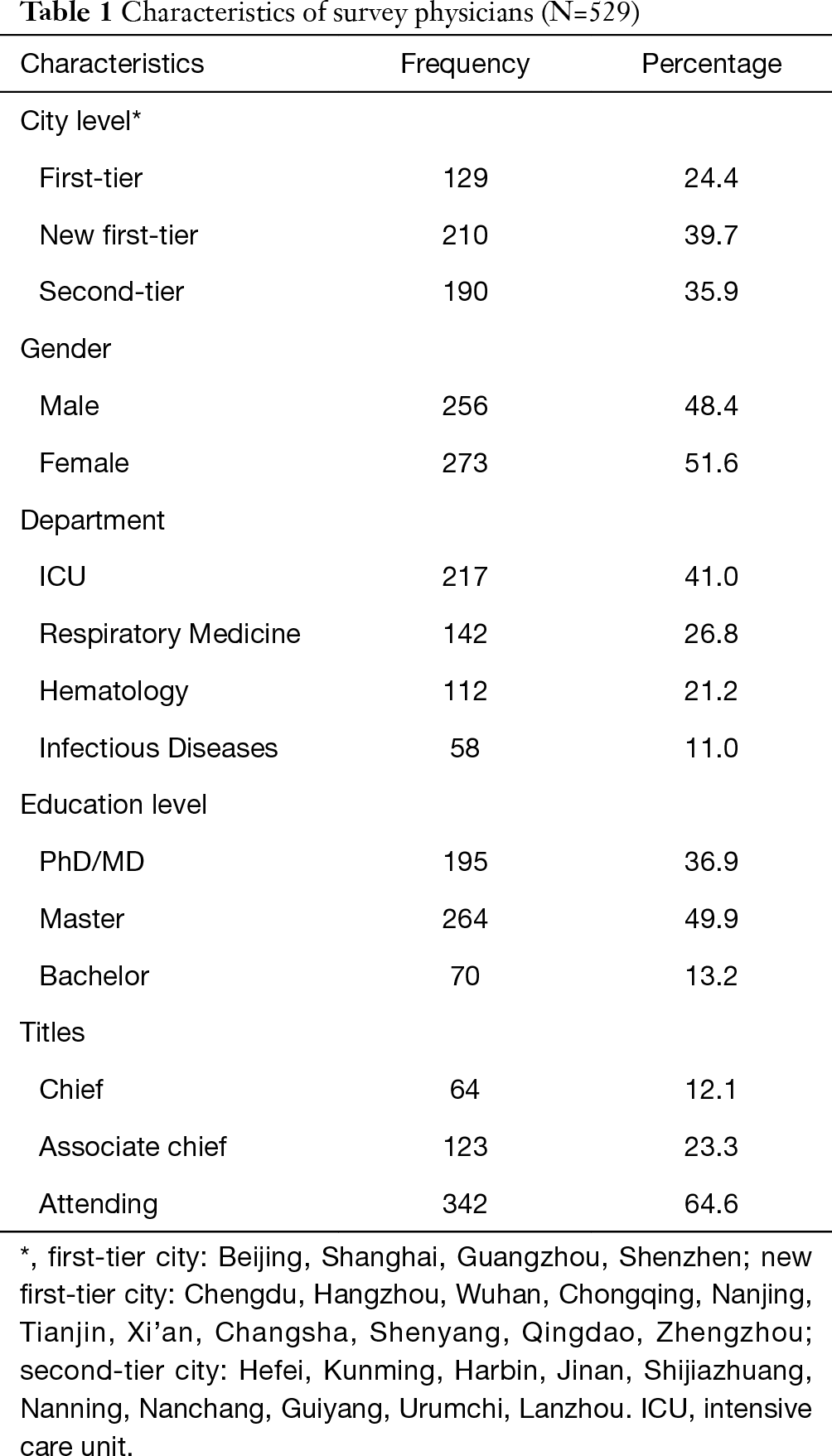 The respondents answered a total of nine questions regarding CRE knowledge, and distribution of responses to each knowledge question is shown in Table 2. The percentage of correct answers to each question ranged from 25.7% to 89%, and the scores ranged from 1 to 9, with a median of 6 (interquartile range, 5–7). The physicians demonstrated insufficient knowledge about the right use of antibiotics to CRE (question Nos. 4, 5, and 7). The level of knowledge of respondents was as follows: high, 28.92%; moderate, 62.94; and low, 8.12%.

Factors associated with the knowledge level 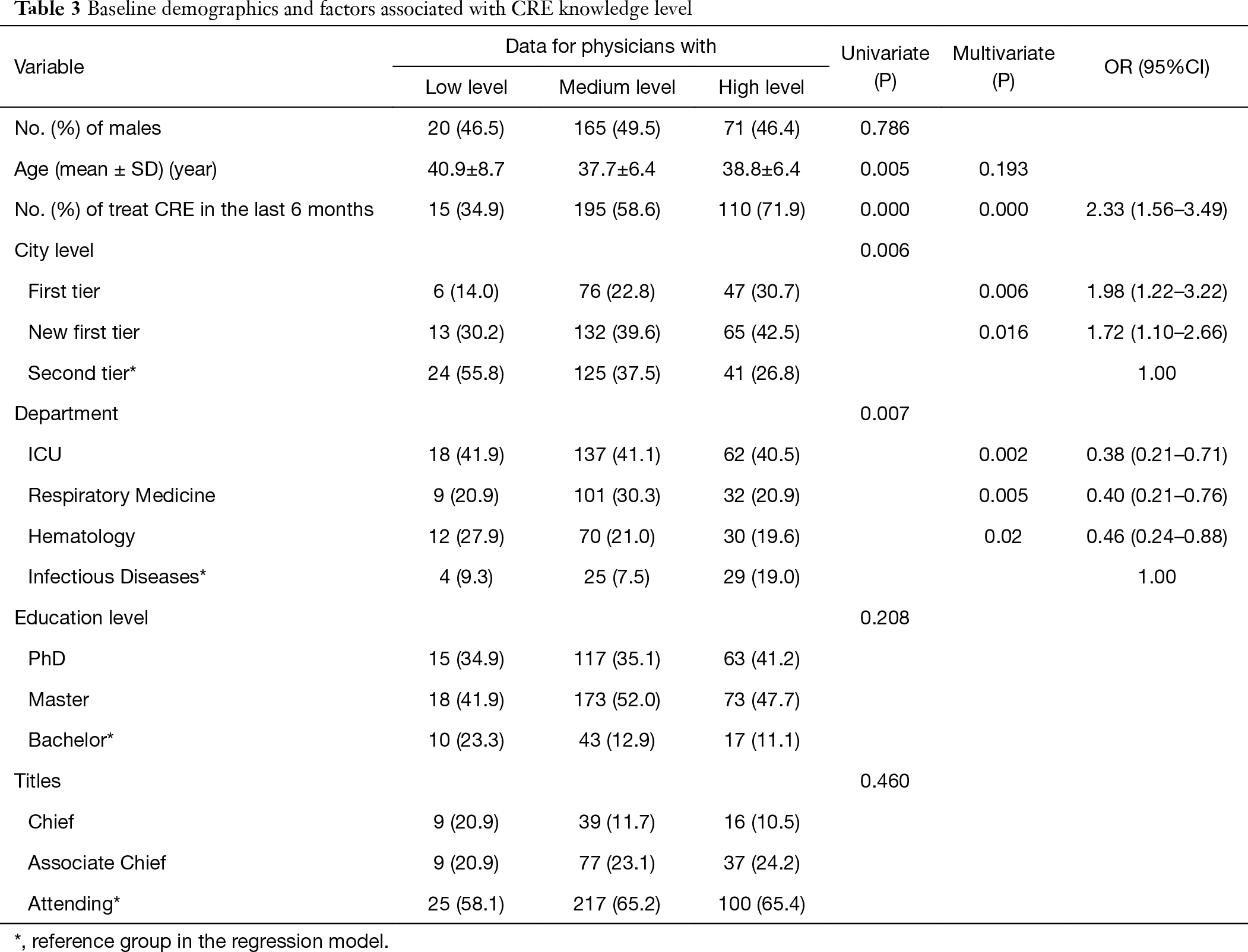 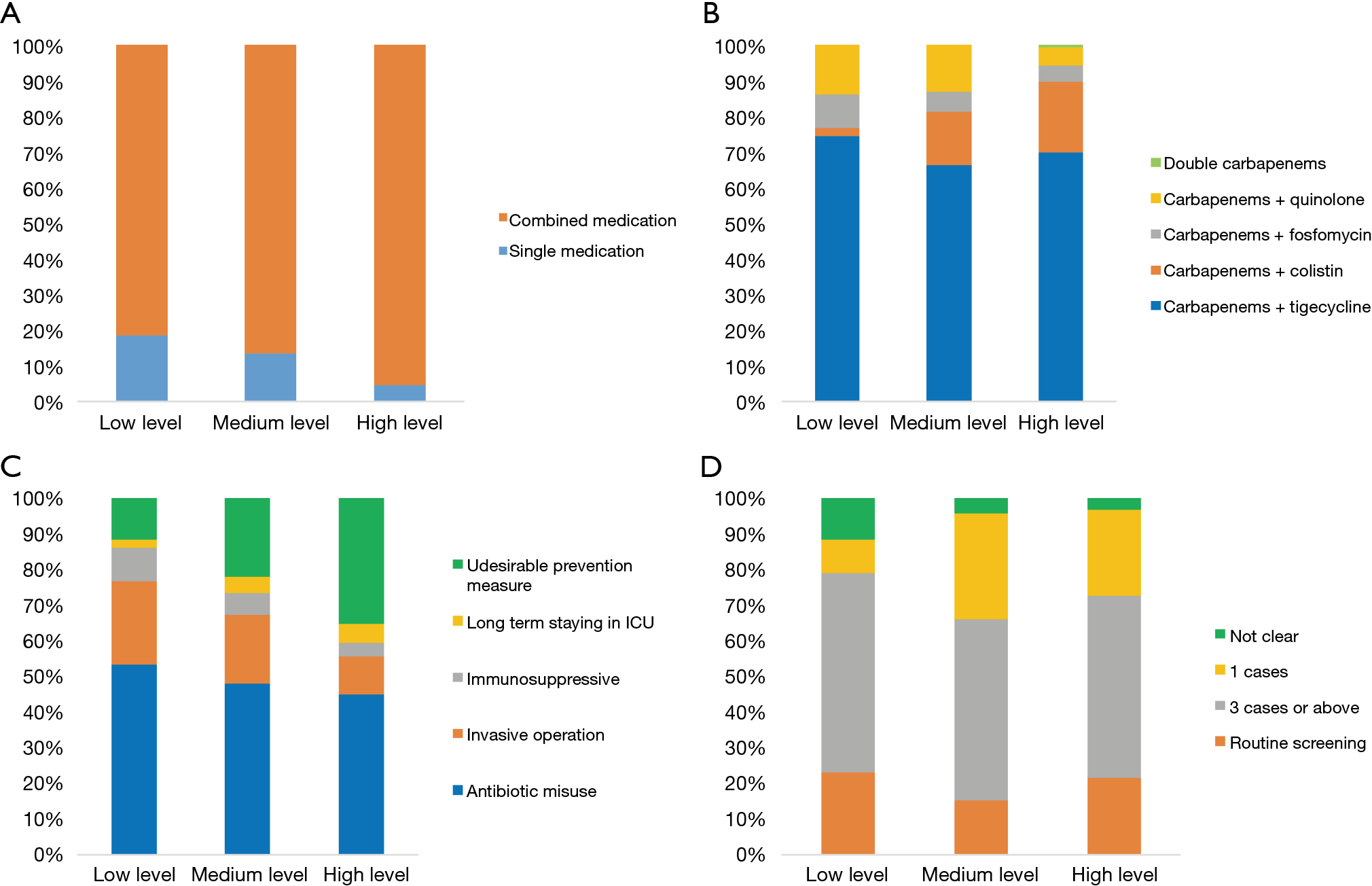 A large proportion of hospital-acquired infections caused by multidrug-resistant organisms (MDROs) have been frequently documented in recent years, increasing mortality, readmissions, and economic burden (4,12,13). Although MDROs have received national media and legislative concerns, this was the first nationwide survey about the knowledge and practice toward CRE among Chinese physicians. Unlike studies addressing knowledge on antibiotic use (14-16), the present study focused mainly on the current physician’ knowledge and practice when facing CRE infection.

In fact, the number of cities in China has exceeded 600 and they are categorized by New Tier City Institute, an unofficial academic research institute, as first- to fifth-tier cities. First-tier cities have higher commercial resources aggregation, transportation convenience, and future development than other tier cities, resulting in more top hospitals located and elite physicians gathered. The results showed that the total scores for knowledge ranged from 1 to 9 (median =6; interquartile range, 5–7), indicating that the current knowledge of Chinese physicians toward CRE is common. Similar, the study by Thibodeau (17) on 434 medicine clinicians in 3 teaching hospitals found that 51.1% of clinicians correctly scored 50% or greater on the knowledge questions. Our multivariate analysis showed that some investigated demographic characteristics, such as city level, work department, and personal experience, had an impact on CRE-related knowledge. Especially, the physicians who worked in first-tier cities, served in the Department of Infectious Diseases, or have treated CRE infection in the last 6 months, had a higher knowledge level for they have more opportunities for academic exchange and personnel training. Therefore, the need for increased awareness of CRE-related knowledge by Chinese physicians is obvious.

As this survey was conducted in 2017 summer, CRE was endemic in Chinese hospitals, and nearly 60.5% of physicians dealt with CRE infection in the last 6 months. Still several misunderstandings exist on the major of physicians. For instance, the organisms of CRE are resistant to nearly all antibiotics, including third-generation cephalosporin. However, 59% of surveyed physicians still considered that cefoperazone was suitable for the treatment of CRE infection, which might lead to the abuse of antibiotics for clinical treatment. Besides, higher dose of meropenem rather than imipenem can be selected to treat CRE infection by Chinese expert consensus, but 74.3% of surveyed physicians have no sense of carbapenems treatment to CRE and made wrong answer. This misunderstanding regarding the use of carbapenem in treatment was worse than previously thought. Therefore, more systematic and targeted education for physicians is highly needed to address such misunderstandings.

In addition, this study also compared the clinical and infection control practices of physicians with different levels of CRE knowledge. Although infection control practices effectively decrease the spread of resistance during outbreaks (18), awareness among clinicians is imperative in preventing further spread of this epidemic. However, variation in practice regarding CRE among physicians may illustrate how knowledge regarding CRE threats and controls differ within the hospitals. Take Figure 1D as an instance, WHO has recommend that surveillance screening for CRE should be performed as soon as possible after hospital admission or risk exposure while China has not issued guidelines or consensus on the timing of screening for CRE. Therefore, major of the surveyed physicians considered that screening for CRE should be performed in healthcare associated outbreak according to Chinese guideline. As reported by Fedorowsky (19), lower CRE incidence rates were associated with higher organizational culture scores, so it’s necessary to conducted more organizational culture or training for Chinese physicians to improve their compliance with practice or knowledge level.

The present study had some limitations. First, only 53 of top 100 large-size tertiary comprehensive hospitals were involved, and not all physicians in designated departments participated in this survey, which might affect these results. Second, the questionnaire was not designed for a 5-point Likert scale, but adaptations were made for specific components unique to CRE. However, many gaps in knowledge and a great deal of variability in opinions in Chinese physicians with regard to CRE infection were found, highlighting the urgent need for more targeted education and interventions.

Knowledge and practice of physicians toward CRE questionnaire

2.1 Which of the bacteria is not defined as CRE?

2.2 Which site with CRE infection has higher mortality?

2.3 Is that right to choose the empirical treatment for CRE infection?

2.4 Which antibiotic is not for the treatment of CRE infection?

2.5 When the MIC breakpoint ≥, carbapenem was not for the treatment of CRE infection?

2.6 Which therapy with carbapenem will you choose to treat the CRE infection?

A. Increase the dose

2.7 Which dose regimen will you prefer to treat CRE infection?

2.8 Which is the preferred measure to control the emergence of CRE?

A. Avoiding overuse of prophylactic antibiotics

B. Rational selection of antibiotic types and dosages*

C. Limit the use of carbapenem antibiotics

2.9 Which measure is not the best choice to control the CRE transmission?

*Correct response to each question

3.1 Which treatment will you prefer for CRE infection?

3.2 Which antibiotic will you prefer to treat CRE infection?

3.3 Which is the major risk factor for CRE infection/colonization?

D. Long-term stay in the ICU

3.4 When do you recommend impatient for CRE screening?

The authors would like to thank all participants and chiefs of the Departments of Infection Control who accepted to participate in this study.

Ethical Statement: Ethical approval for this study was obtained from the Institution of Review Board of Fudan University.