In accordance with the 2015 WHO lung NEN classification (1) bpNENs are sub-divided into well or poorly differentiated forms. Well-differentiated forms, referred to as tumors [neuroendocrine tumors, (NETs)], include low- and intermediate-grade malignancies, i.e., typical (TC) and atypical carcinoid (AC), respectively (2). The poorly differentiated group include large cell neuroendocrine carcinomas (LCNEC) and small cell lung cancer (SCLC) and are referred to as carcinomas [neuroendocrine carcinomas, (NECs)]. The Ki-67 labelling index (Li) is not used to classify bpNENs in accordance with the WHO lung NEN classification, however it can distinguish high-grade bpNENs from low-intermediate grade bp NETs, especially in small biopsies with crushed and/or necrotic tumor cells. Ki-67 remains a helpful parameter, when correlated with mitotic index and necrosis, in therapy choice (1,3).

Some paraneoplastic syndromes are occasionally associated with bpNETs, most commonly the carcinoid syndrome (2–5% of cases) (2,5-7).

There is no global consensus on surveillance after complete and radical resection of the primary tumor. Various guidelines recommend different follow-up strategies, in terms of tools and timing (2,5,10).

Due to the rarity of these tumors, identification of independent prognostic factors is lacking and there is no robust evidence regarding behavioral characterization, adjuvant treatment and management of metastatic bpNETs.

Data sharing is therefore extremely important and ideally that every single case should be discussed by a multi-specialist team.

This retrospective analysis aims increase the understanding of metastatic bpNETs, focusing on the pattern of relapse and outcomes of metachronous and synchronous populations.

Clinical records of patients with a diagnosis of NET, evaluated at the European Institute of Oncology (IEO) between 1997 and 2014, were retrospectively reviewed.

The IEO is a referral centre for NET patients and clinical cases of NET patients are usually discussed by a multidisciplinary NET-dedicated team at weekly meetings. Data for this retrospective analysis were extracted from several sources, including the Thoracic Surgery Division database, the Nuclear Medicine Division database, the Tumor Registry database (data collection on all those consulting at the IEO from 1999 to 2007), outpatient activity Software 2013–2014 (outpatient medical record system), and a database of patients prospectively discussed within the NET tumor board between January 2015 to September 2015).

Cancer staging was reported in accordance with the 7th edition of the Union for International Cancer Control/American Joint Committee on Cancer (UICC/AJCC) TNM staging system (11).

“Metachronous” meant that the first diagnosis of the distant metastases was at least 6 months after the date of the primary tumor removal.

Often, due to the poor quality of biological material the pathologist is not always able to differentiate between TC or AC and so NET is used as a common definition or “NOS” (not otherwise specified) bpNET.

We included NOS patients in the analysis as “carcinoid” or “NET” was described in the pathology report.

Primary tumor complete surgery was an anatomic lung resection with adequate lymph node evaluation (at least 6 nodes examined). Three of these nodes had to be mediastinal, including the subcarinal, and 3 from N1 nodes/stations (11,12).

Follow-up and clinical management was at the discretion of each treating physician.

To test the prognostic value of different factors, univariate and multivariate survival analyses were performed.

Abstract communications from the most important conferences on NETs were considerate (ASCO, ESMO, ENETS) from 2013 to the present.

All procedures performed in studies involving human participants were in accordance with the ethical standards of the institutional and/or national research committee and with the principles of the 1964 Declaration of Helsinki and its later amendments or comparable ethical standards. The study was approved by IEO Ethical Committee (No. R 341/15-IEO 354).

Differences between synchronous and metachronous bpNETs in the distribution of categorical variables were tested by the Chi-Square test and the Chi-Square test for trend, as appropriate. Overall survival (OS) was defined as the time interval from date of diagnosis of metastatic bpNET to death from any cause or to last date of follow-up. OS was calculated with the Kaplan-Meier method and compared across different subgroups by means of the Log-rank test. All variables from the univariate analysis were tested in a multivariate Cox regression model, and retained only if they improved the model fit significantly (P≤0.10). Hazard ratios (HR) and 95% confidence intervals (CI) were reported. All analyses were carried out with the Statistical Analysis System (SAS) software (SAS Institute, Cary, NC, USA) and the R (http://cran.r-project.org/) software. All the reported P values were two sided.

Characteristics of the whole study population 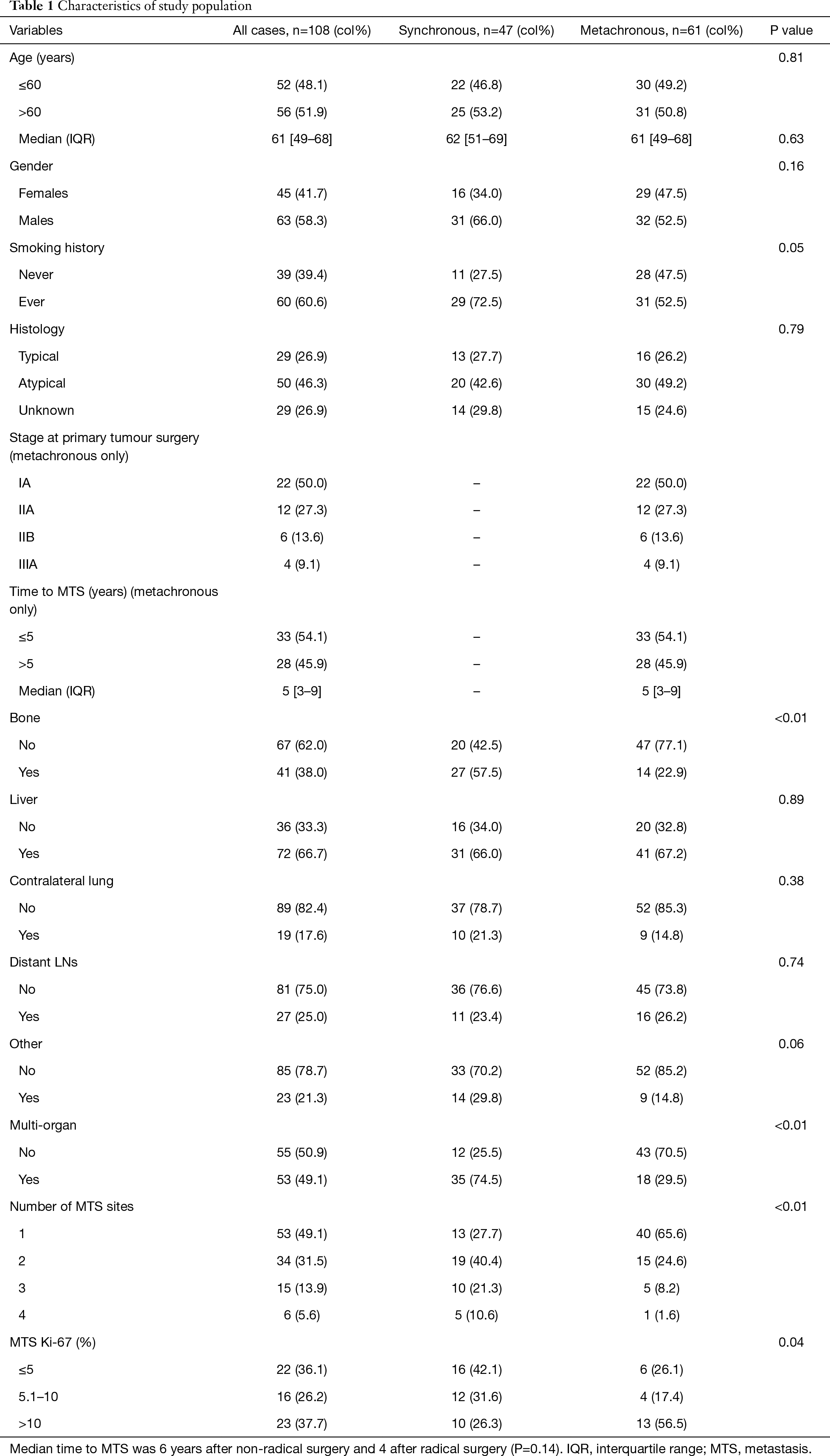 Median follow-up was 59 [11–215] months, defined as median time between the date of diagnosis of metastatic bpNET to death from any cause or to last date of follow-up.

Gender differences in patients with metachronous metastatic bpNETs were not significant (female/male: 29/32), as well as ever- and never-smokers (52.5% and 47.5%, respectively).

A tumor-node-metastasis (TNM) staging was evaluable in 44 cases (72%) of metachronous disease. 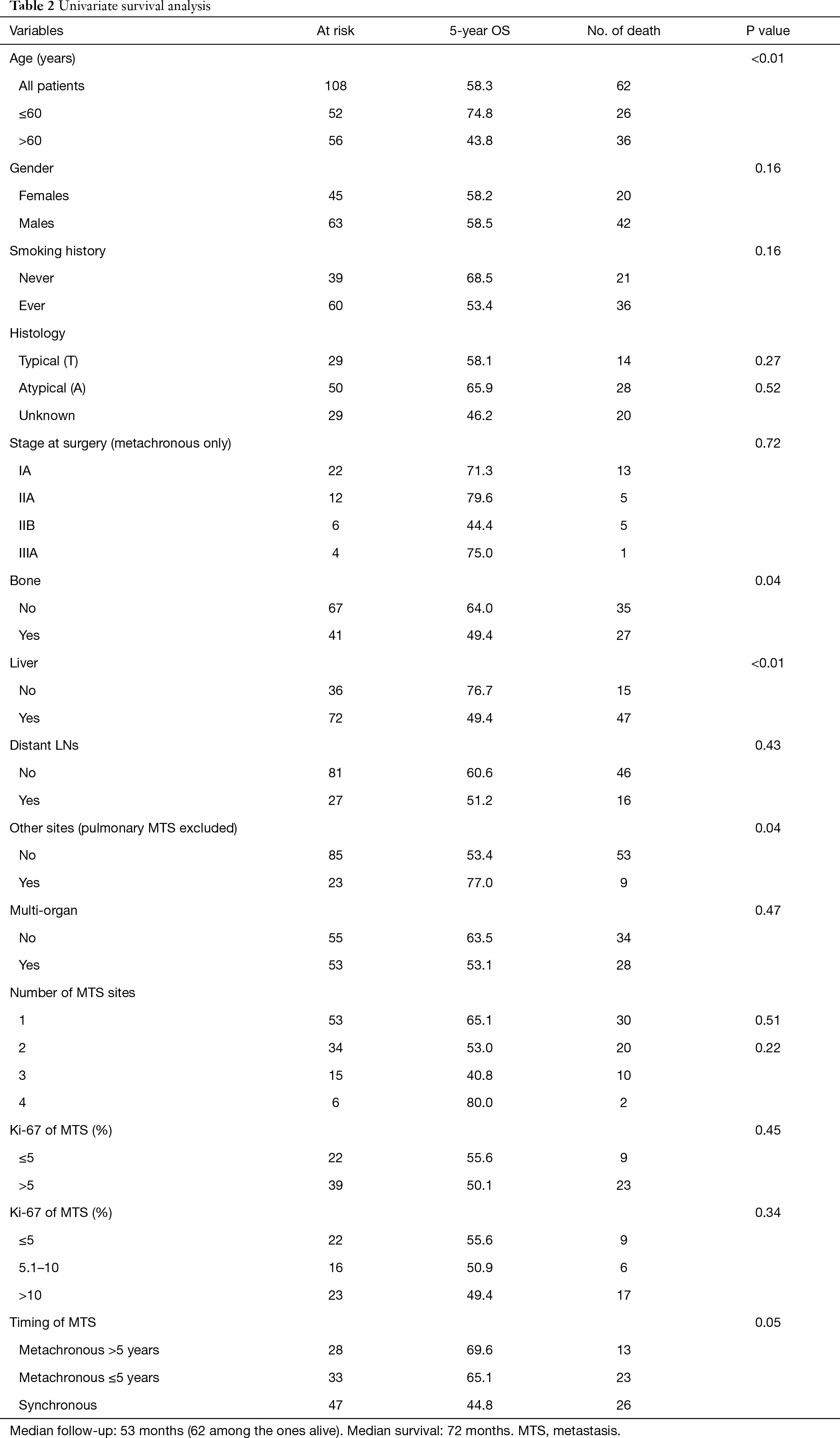 Time to recurrence distribution, shown in Figure 1, indicated two relapse peaks after primary resection, the former between 25 and 36 months and the latter beyond 72 months. 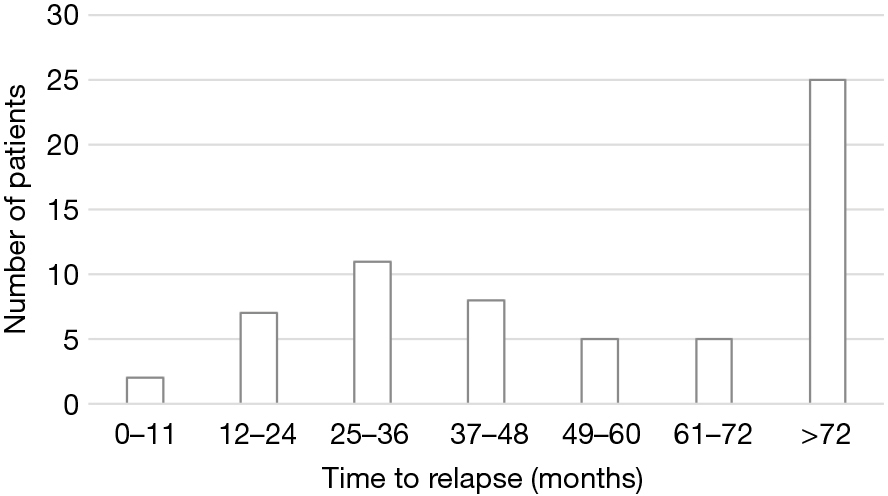 The most common methods of first recurrence detection were CT scan (19 cases), liver US in 5 patients, SRS in 3, CgA levels, 18FDG-PET/CT and magnetic resonance imaging (MRI) in 2, 68Ga-DOTA-peptide PET/CT and chest X-ray in 1.

Survival analysis for the whole population 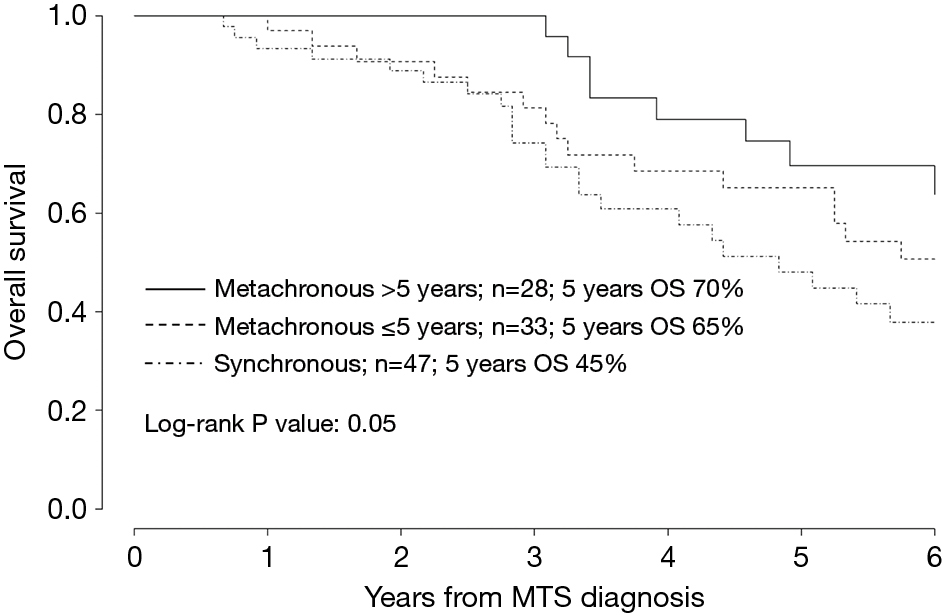 Figure 2 Overall survival according to time to metastasis. 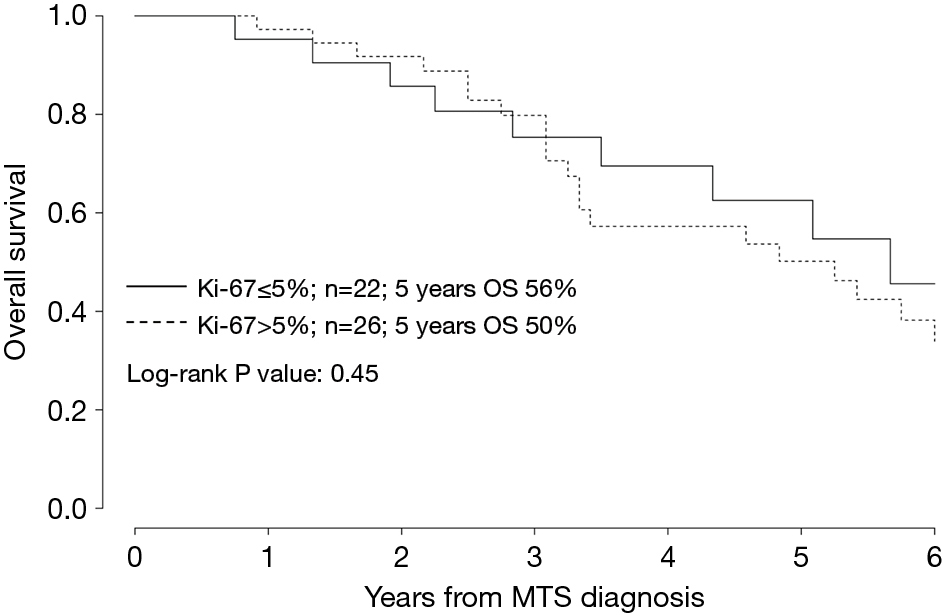 Moreover, there was a significant positive correlation between TTR and survival (Figure 2).

As shown in Table 4 the most common first-line therapy performed was SSA in 43 (40%) patients (in 13 cases associated with other therapies), followed by peptide receptor radionuclide therapy (PRRT) in 20 (19%), surgery in 20 (19%) and platinum-etoposide ChT in 13 (12%). Liver resection was performed in 5 cases (all metachronous) and lung (primary +/− metastasis) surgical resection in 12 cases. Somatostatin analogues were administered as a first-line in 90% of TC and in 38% of AC. The subgroup analysis of patients with ChT and surgery as first-line therapy showed that diagnosis of metastatic disease was before 2010 in 74% and 70% cases respectively.

This report represents one of the largest series of patients with bpNET with distant metastases managed in a single institution, with a long-term follow-up (median follow-up was 59 months), similar to previously published reports (7,13-16).

The results of this analysis are limited due to the long time interval for data collection (1997 to 2014), variety of therapeutical and follow-up management and lack of retrospective centralized pathological review.

Comparison between synchronous and metachronous metastatic bpNETs indicated a prevalence of males and ever smokers in the synchronous population, similar median age at diagnosis of metastases and similar distribution between TC, AC and NOS.

Among metachronous bpNET patients, the most frequent primary surgical approach was lobectomy, as reported in other studies (15,16,21,25), and complete resection was described in only 43% of cases. Surgical procedures were performed in several Centres nationally, only a minority of the cases, all complete), at IEO.

Notably description of completeness of surgical resection is missing in several studies on bpNETs (26-28).

There is no consensus on adjuvant therapy for bpNETs. More in general it is not recommended, even though some guidelines suggest that either ChT (more often platinum-etoposide) and/or RT should be discussed in intermediate grade (atypical, high Ki-67) and intermediate stage (pN+) on an individual patient basis (2,29).

The 5 years median TTR observed in our study was longer compared with that reported in other studies (20,21,30,31).

Surprisingly there was a shorter TTR after complete primary tumor resection compared with incomplete (4 and 6 years, respectively). Several reasons may explain this including different biology of the disease and different follow-up. Therefore, we think that nodal metastases should be confirmed as one of the most important prognostic factors (9,13,31-33).

The shorter m-TTR observed in patients with AC compared with TC (3 and 4.5 years, respectively) and recurrence time distribution (around 50% of recurrences happened after 5 years) was in line with other reports (6,21,23,33,34).

Unfortunately a detailed description of the follow-up procedures was reported in only 36% of patients, because of the long period of the cases included and lack of completeness of medical records.

Our personal recommendation for surveillance is Chest-Abdomen CT every 6 months for the first 3 years. Thereafter patients should be followed annually for up to 15 years. Biochemical markers, such as CgA, should be determined every 6 months (in cases with elevated values at baseline).

Median OS for the whole population is similar to the 6.6 years of mOS reported in a recent large series of metastatic bpNETs (7).

Age, bone metastasis, liver metastasis and Ki-67 as a continuous variable significantly correlated with prognosis at multivariate analysis. Moreover, there was a significant positive correlation between TTR and survival.

This could have conditioned some results, such as the surprising statistical correlation between pTNM staging, complete surgery and histotype and clinical outcome.

In Table 4 we describe the most frequent first and subsequent lines of therapy.

Although we have these data, we avoided a retrospective and misleading analysis of treatment efficacy because of long period of time covering the selected cases and the variation in therapeutical approaches.

In our study SSA was the most frequent first-line therapy (40% patients). Although there is no absolute evidence of efficacy of SSA as anti-tumor therapy in bpNET, they are usually proposed after extrapolating data from the GEP tract evidence.

Studies of therapies in the advanced or metastatic lung carcinoid setting have been limited to retrospective analyses and some small prospective studies (6,38-40). Recent articles reviewed the current standard of care and recent advances in therapy for bpNETs (41-44).

In conclusion, this is one of the largest single-centre series of metastatic bpNETs. Although many questions still remain open: difference between typical and atypical behavior, role of functional imaging in diagnostic workup, tools and timing of follow-up after a complete resection of the primary tumor and identification of independent prognostic factors (i.e., KI-67), the results of our retrospective analysis represent a basis for designing prospective clinical trials, in adjuvant and metastatic settings, for homogeneous bpNETs populations.

Ethical Statement: All procedures performed in studies involving human participants were in accordance with the ethical standards of the institutional and/or national research committee and with the principles of the 1964 Declaration of Helsinki and its later amendments or comparable ethical standards. The study was approved by IEO Ethical Committee (No. R 341/15-IEO 354).