Mixed aortic valve disease (MAVD) is associated with a high rate of disease progression with 42% and 30% freedom from the composite end points of aortic valve replacement (AVR), NYHA III/IV symptoms, and death at 3 and 5 years respectively (1,2). Indeed, the natural history outcomes of mixed moderate aortic valve (AV) disease were similar to isolated severe AV disease in terms of progression to AVR, NYHA III/IV symptoms, and cardiac death. This moderate MAVD therefore has a poorer prognosis than isolated moderate aortic stenosis (AS) or aortic insufficiency (AI) (1). Zilbersac et al. demonstrated a similarly high event rate with event free survival (AVR and cardiac death) as low as 19% at 6 years for MAVD where both lesions were moderate or greater (3).

Approximately 50% of asymptomatic patients with severe MAVD will require AVR within 1 year (4). As suggested by Parker et al., this is not surprising due to the dual volume and pressure strain on the heart (5). Although we are gaining a better understanding of the aggressive course of MAVD, there are currently no evidence-based recommendations to guide timing of surgical AVR in this population (3,6). In general, surgical intervention is often guided by established recommendations for the predominate lesion (3,6,7). Egbe et al. showed that in MAVD with moderate or severe AS and AI, a greater degree of pre-operative left ventricular hypertrophy (LVH) is associated with more post-operative left ventricular (LV) dysfunction and cardiac adverse events (8,9). This study seeks to further define the long term clinical and echocardiographic outcomes for AVR in MAVD versus more isolated AV lesions.

This study was approved by the University of Wisconsin-Madison Institutional Review Board (No. 2015-1050). A waiver of the need to obtain consent from patients was approved. We conducted a retrospective review of 1,011 consecutive patients who underwent AVR between January 2000 to March 2016. We excluded patients who underwent concomitant operations except for coronary artery bypass grafting (CABG) and/or limited ascending aortic replacement. We excluded aortic surgeries involving the root, or aortic arch, as well as procedures involving hypothermic circulatory arrest.

A logistical regression of covariates was used to produce a propensity score for patients with predominantly moderate or severe AS where associated insufficiency was either mild or less (group 1), or moderate and severe (group 2). Similarly, propensity score calculation was performed for the predominant AI population for groups 3 and 4. Then 1:1 greedy matching algorithm was performed where the matched variables included age, sex, preoperative creatinine, left ventricular ejection fraction (LVEF), hypertension, cerebrovascular disease, peripheral vascular disease, lung disease, liver disease, diabetes, hyperlipidemia, history of endocarditis, and cancer within 5 years of surgery. A Cox proportional hazards model using univariate as well as stepwise forward and reverse multivariable analysis was performed to determine the predictors of mortality. Statistics were performed using Statistical Package for the Social Sciences software (SPSS Inc., Chicago, IL, USA). 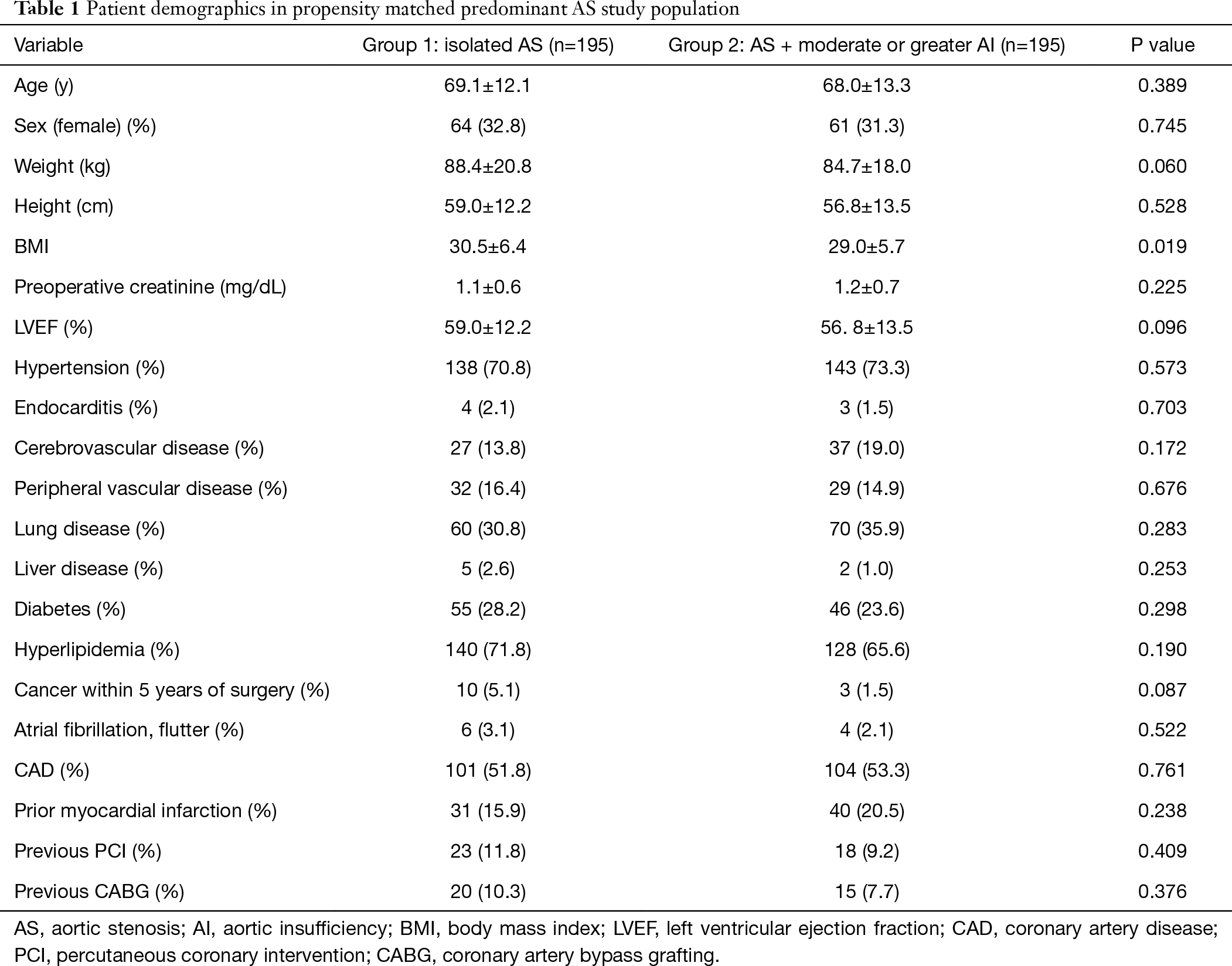 Conversely, compared with group 4, the predominant AI group 3 population was younger (56.4±15.6 vs. 61.7±16.3 yrs, P=0.037), and a higher incidence of endocarditis history (32.2% vs. 3.8%, P<0.001). Following propensity matching, there were 53 patients in each group with similar demographics and comorbidities (Table 3). There were no differences in concomitant operations performed for the 2 groups (Table 4). Group 4 had a greater duration of CPB (149.3±52.0 vs. 191.9±81.7, P=0.002) and aortic cross-clamp time (101.9±34.3 vs. 129.1±53.2 min, P=0.006). There were no differences in postoperative complications including reoperation for bleeding, neurological events, pneumonia, prolonged ventilation, gastrointestinal complication, acute renal failure, permanent pacemaker implant, postoperative atrial fibrillation, or postoperative hospital stay (P>0.05). 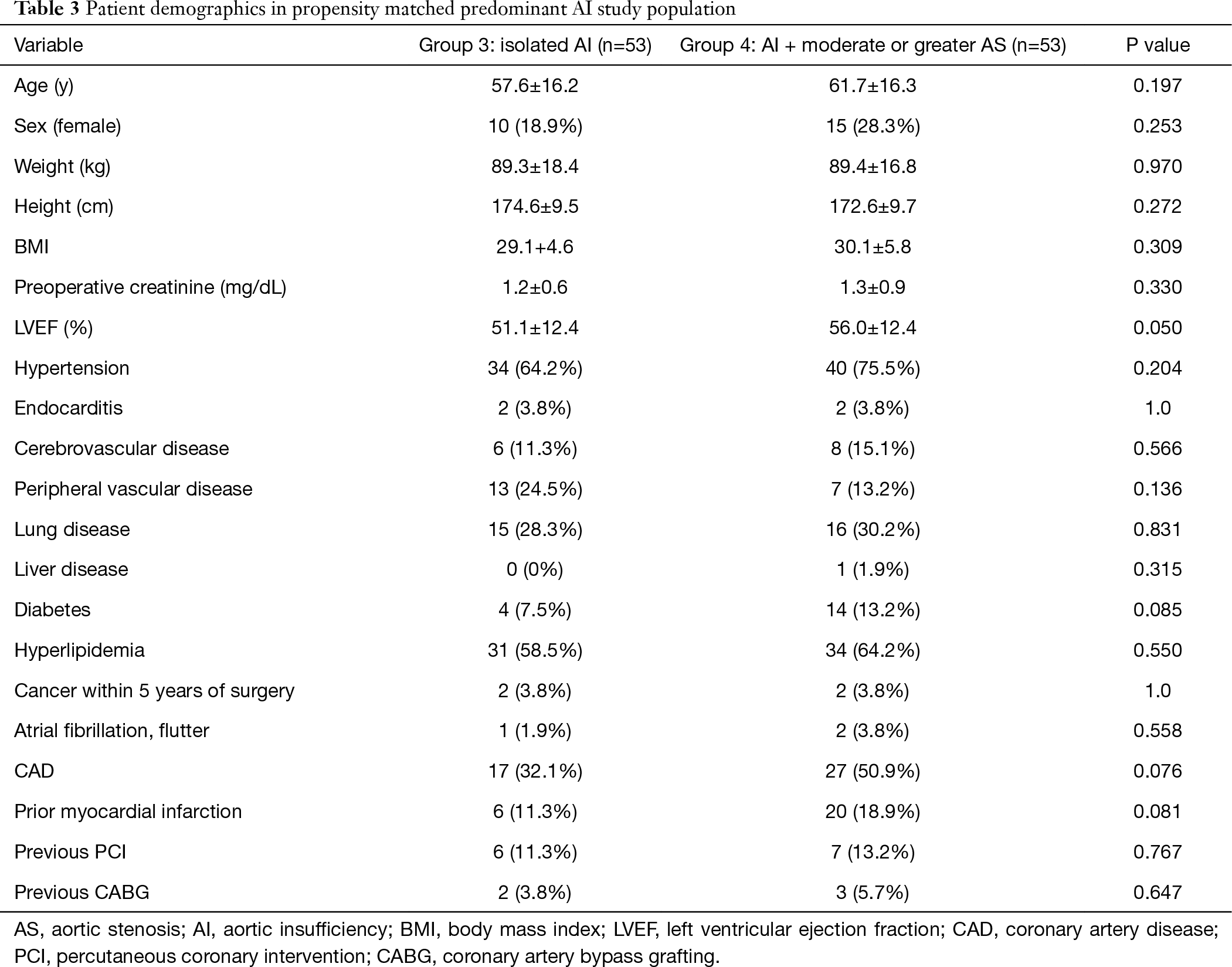 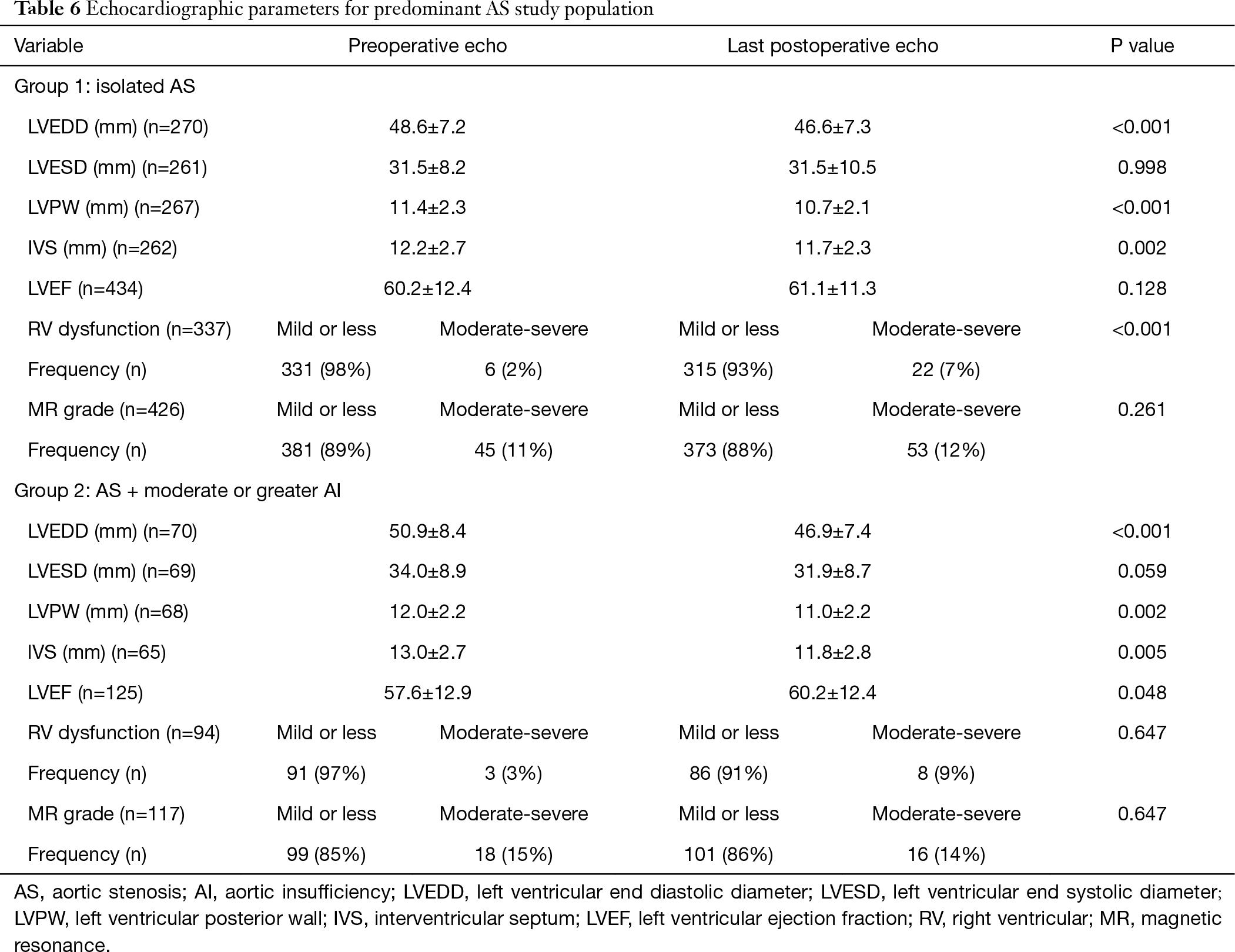 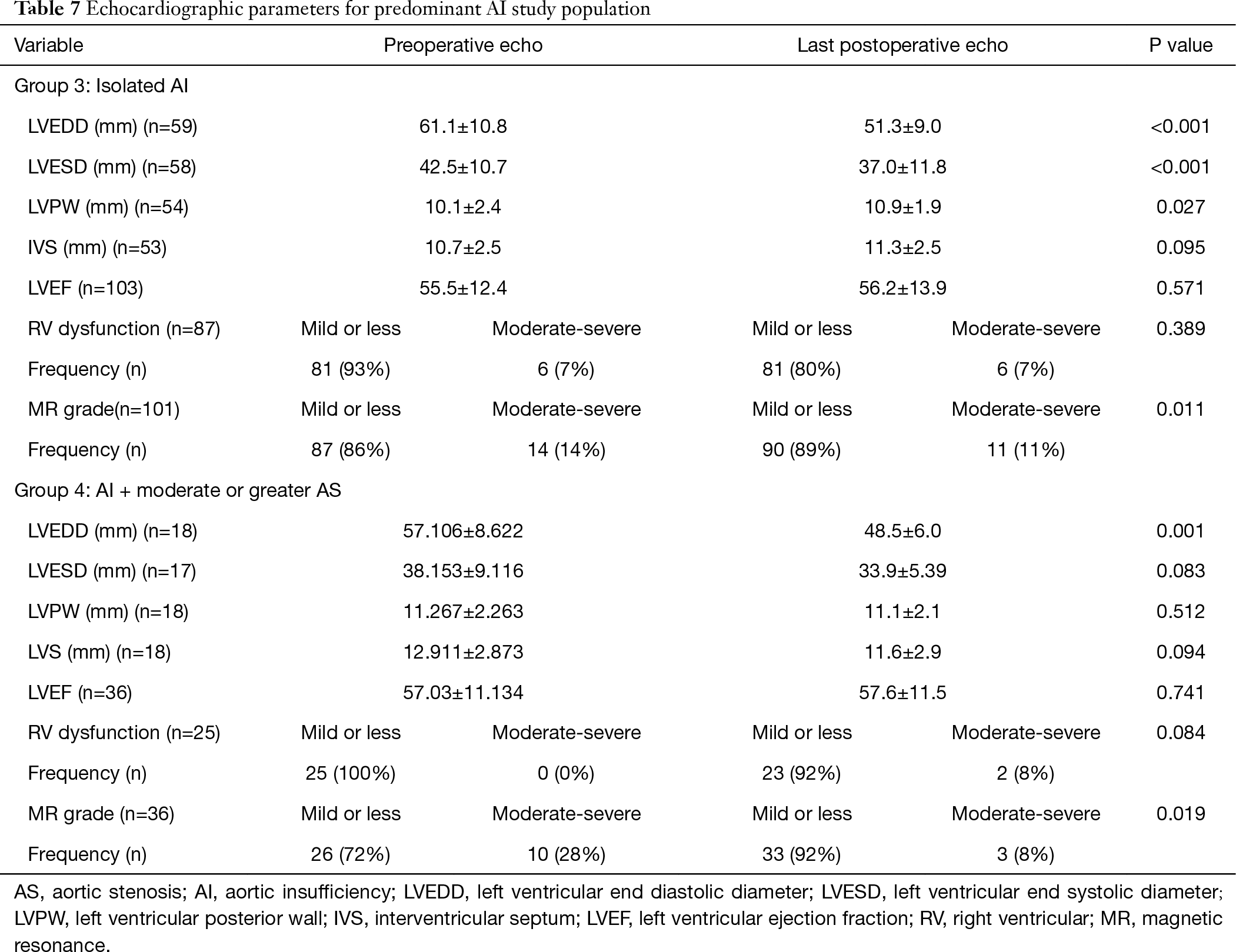 There is a paucity of published data on the relative outcomes of surgical AVR in predominant AS and AI lesions versus those with concomitant moderate or greater corresponding stenotic or regurgitant AV pathology. This study revealed that associated AI in the predominant AS population was less detrimental to long term survival than concomitant AS in the predominant AI population. Patients undergoing AVR for predominant AI with associated moderate or severe AS should be closely monitored for symptom progression, decline in LVEF, and increase in LV dimensions. A low threshold for surgical intervention may be reasonable for this population of patients.

Patients with AV stenosis and/or aortic regurgitation are subjected to increased pressure and/or volume overload of the left ventricle, leading to concentric or eccentric LVH (10,11). In the AS group, group 1 had a smaller LVEDD than group 2 with more severe associated AI. This is consistent with the eccentric hypertrophy expected in group 2 as opposed to concentric hypertrophy in group 1. However, reverse remodeling with decreased IVS and PW thickness after AVR resulted in no difference in LV dimensions on follow up echo. These findings are consistent with prior studies examining AS with concomitant AI where appropriate preoperative LV adaptation that preserves systolic function was associated with preserved postoperative LV function after surgical AVR regardless of the coexisting degree of preoperative AI (12). It is important to point out that this is distinct from acute regurgitant volume from a paravalvular leak following transcatheter AVR which predicts a worse outcome in early and intermediate follow-up (13).

Indeed, LVEF improved in those with worse AI (group 2) to match those with less AI (group 1) after AVR. Furthermore, MR improved to comparable levels in both group 1 and 2 despite group 2 having worse MR initially. Similar to Catovic et al. and others, we did not find a difference in survival following AVR between isolated AS and AS associated with significant AI (12,14). Previous authors have demonstrated that AVR for isolated AS or MAVD had 5 and 10 years’ postoperative survivals of 85% and 68% respectively (12). This is comparable to our 5 and 10 years’ survival in a similar population of 77% and 52.2% respectively. As expected, associated AI was not predictive of survival in our Cox multivariable analysis.

Gilbert et al. reported that predominant AI with associated AS in MAVD has different effects on the LV where patients are more likely to have LVH, diastolic dysfunction, and less LV dilatation compared with isolated AI (15). When compared with group 3 on preop echo, we found that group 4 had greater LVH but there was no difference in the degree of LV dilatation. In our study, while the LV dimensions did decrease after AVR, there was no change in pre vs. postop PW and IVS. thickness in group 4. Ali et al. demonstrated that incomplete regression of LVH after AVR is associated with decreased survival (16), and LVH is a risk factor for cardiac morbidity and mortality (17). However, we recognize that in most patients with AI, LVEDD and volumes became near normal within 2 weeks after AVR, where as a significant regression of LVH took at least 6 months (18). Our follow-up period of 1.2 years in this group should have been sufficient to detect decreases in wall thickness.

Accordingly, the AI group with more severe AS has a lower 10 years’ survival of 59.7% compared with group 3 at 85.7% with less severe AS. This is consistent with findings by Rashedi et al. who found that in the natural history of MAVD, the severity of AS had the strongest correlation with progression to death, symptoms, and AVR (6). We demonstrate that this trend was also applicable for survival post-AVR in MAVD for predominant AI lesions. Rashedi et al. also found that MAVD was a more aggressive disease process with more rapid progression to LV systolic dysfunction at 4.3%/yr (6) in contrast to the 1.2%/yr in predominant AI patients (19). Similar to pre-surgical natural history findings by Egbe et al. (4), we also found that LV dimension was not a predictor of survival in MAVD after AVR. Une et al., also reported that despite improvements in LVEF the clinical effects of LVEF recovery was poorer in patients with AI compared with AS (20). Our finding that RV function tend to decline following AVR in patients with worse AS in the predominant AI group may also explain a lower survival in group 4 compared to group 3.

This study has limitations due to its retrospective nature in a single institution with inherent limitations and biases. While propensity matching adjusted for certain differences in patient demographics, and comorbidities, it is possible that other unidentified characteristics had influenced our results. Since our survival data was obtained from hospital records, we may not have captured all mortality events. A decrease in study population following propensity matching may also limit our ability to detect smaller differences in clinical outcomes.

In conclusion, our study confirms that in the predominant AS population, similar perioperative and survival outcomes can be expected after AVR between patients with isolated AS, and AS associated with significant AI. However, in the predominant AI population, survival outcomes after AVR were poorer in AI associated with significant AS than in isolated AI. These data may influence the recommendation on echocardiographic surveillance frequency and indications for surgery in this MAVD population.

We acknowledge the administrative support of Entela Bua Lushaj in the conduct of this study.

Ethical Statement: This study was approved by the University of Wisconsin-Madison Institutional Review Board (No. 2015-1050). A waiver of the need to obtain consent from patients was approved.