Up to now, surgical resection is still the major and most effective treatment for early stage NSCLC. Anatomic lobectomy combined with systematic mediastinal lymph node dissection (SMLND) has been considered to be the standard surgical treatment (3). However, the optimal lymph node resection mode for early stage NSCLC remains controversial for many years around the world. Some randomized controlled trials showed that the patients with selective lymph node dissection (SLND) based on the lobe specific lymphatic pathway presented lower perioperative morbidities and similar survival when compared with the patients who underwent SMLND, and SLND has been used as an alternative lymph node dissection procedure in patients with early stage NSCLC (<2 cm) in order to reduce perioperative complications, especially for elderly patients or the patients with impaired pulmonary functions (4-7). Therefore, the factors predicting lymph node metastasis would be valuable for making a suitable decision on lymph node resection mode for clinical stage IA NSCLC. This study aimed to investigate the predictive factors of lymph node metastasis in clinical stage IA lung cancers.

Patients who were diagnosed as clinical stage IA NSCLCs and underwent standardized lobectomy or bilobectomy with systematic lymph node dissection at National Cancer Center/Cancer Hospital, Chinese Academy of Medical Sciences and Peking Union Medical College from July 2014 to June 2017 were retrospectively collected from a prospectively established NSCLC database. Preoperative evaluations included: physical examination, contrast-enhanced CT of the chest and abdomen, magnetic resonance imaging (MRI) of the brain, whole-body bone scintigraphy, electrocardiogram, pulmonary function examination and blood biochemical examinations for liver and kidney as well as coagulation function. Positron-emission tomography (PET) scan was not routinely performed in early-stage lung cancer due to low cost-efficiency. When the shortest axis of the mediastinum lymph node was longer than 1 cm on CT scan, it was considered to be positive lymph node metastasis preoperatively.

The inclusion criteria of this study were: age ≤75 years; no history of malignant tumors; no preoperative treatment such as chemotherapy or radiotherapy as well as immunotherapy; no history of severe cardiovascular or pulmonary diseases. The TNM stage of the tumors was determined according to the 8th American Joint Committee on Cancer (AJCC) Edition (2015) of the TNM Classification for Lung Cancer.

This study was approved by the Ethics Committee of Cancer hospital, Chinese Academy of Medical Sciences (No. NCC2014ST-07). All informed patients’ consents were signed and collected preoperatively.

The Student’s t-test and χ2 test were used to test differences in clinicopathologic characteristics between two groups for statistical significance, and Fisher’s exact test was used to compare the frequencies of non-specific lymph node metastasis between positive and negative lobe specific lymph node groups. The binary logistic regression was performed to identify factors predicting lymph node metastasis in clinical stage IA NSCLC. Tumor size as a predictive factor was analyzed by the receiver operating characteristic (ROC) curve to determine the cutoff value. All statistical analysis was performed using IBM SPSS 22.0 software. A P<0.05 was considered to be statistically significant. 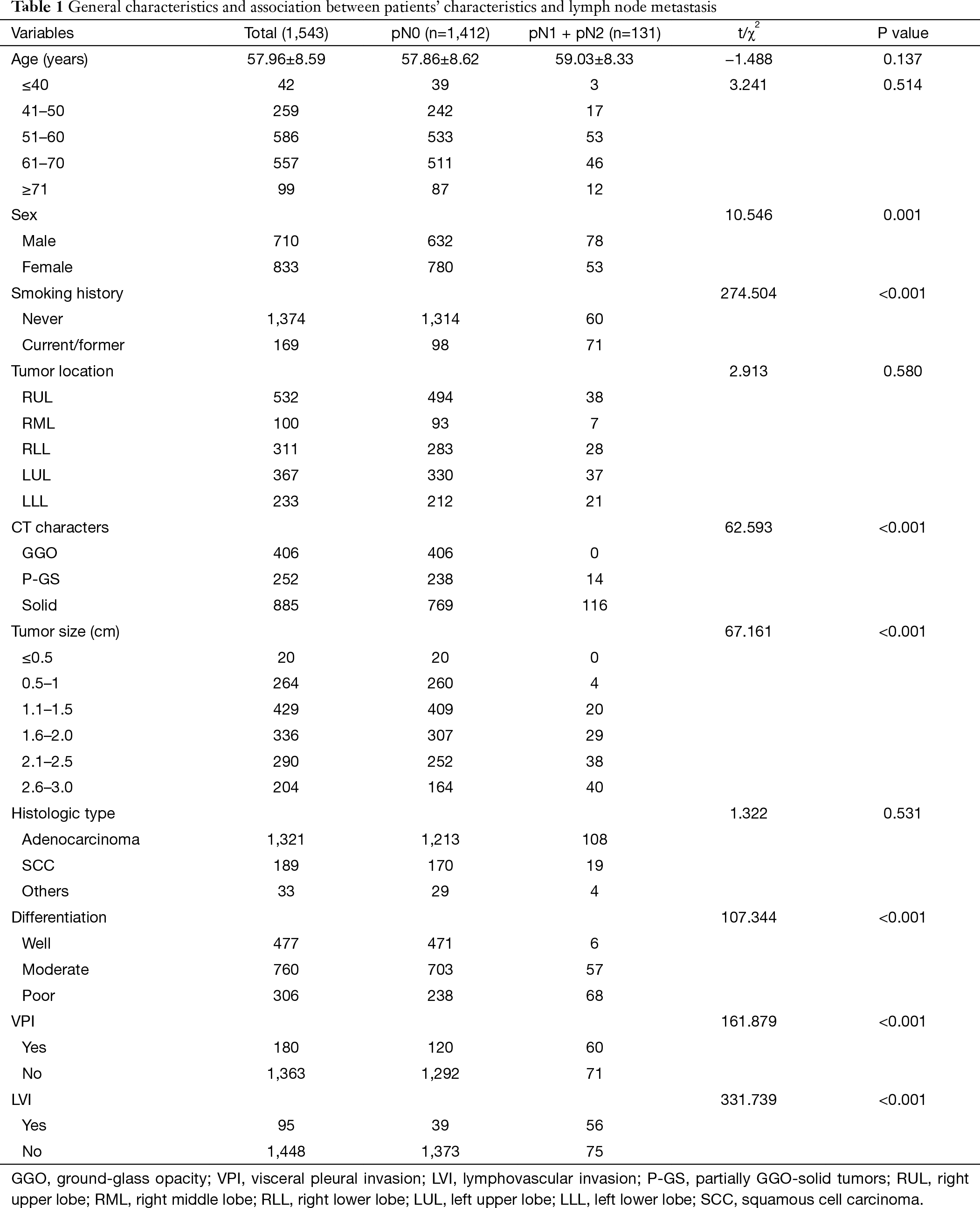 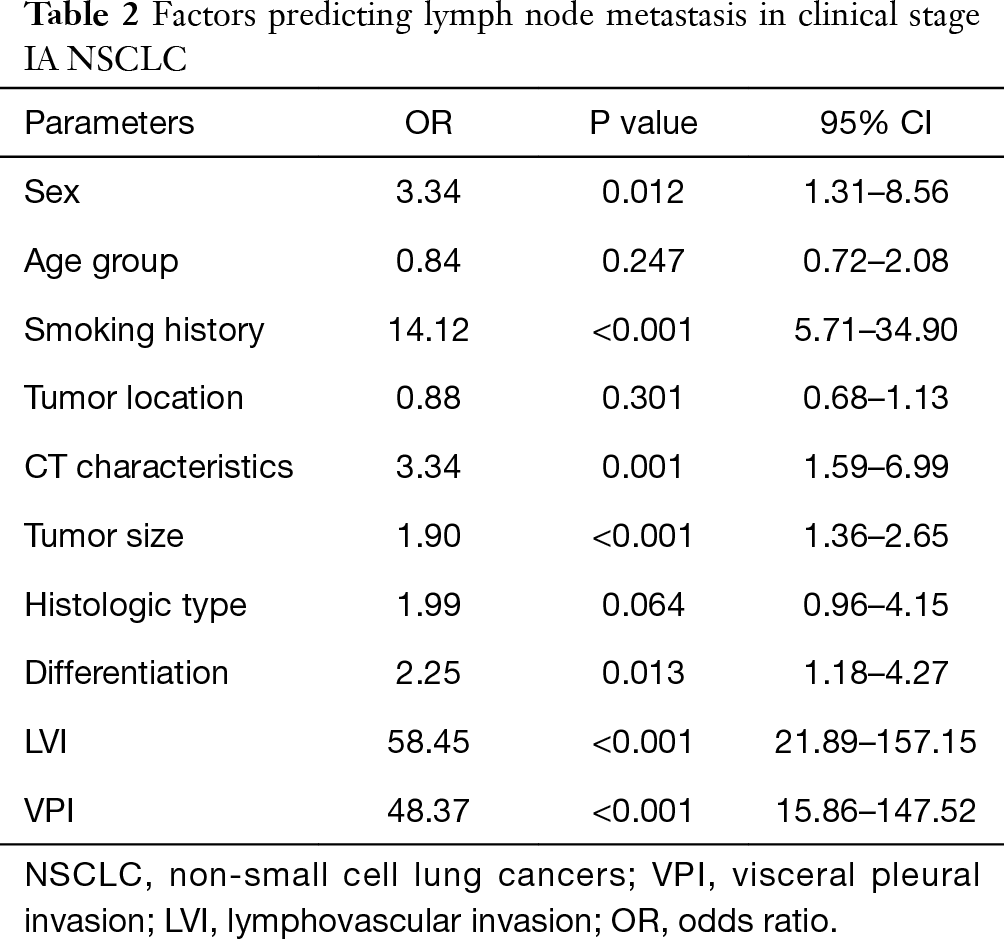 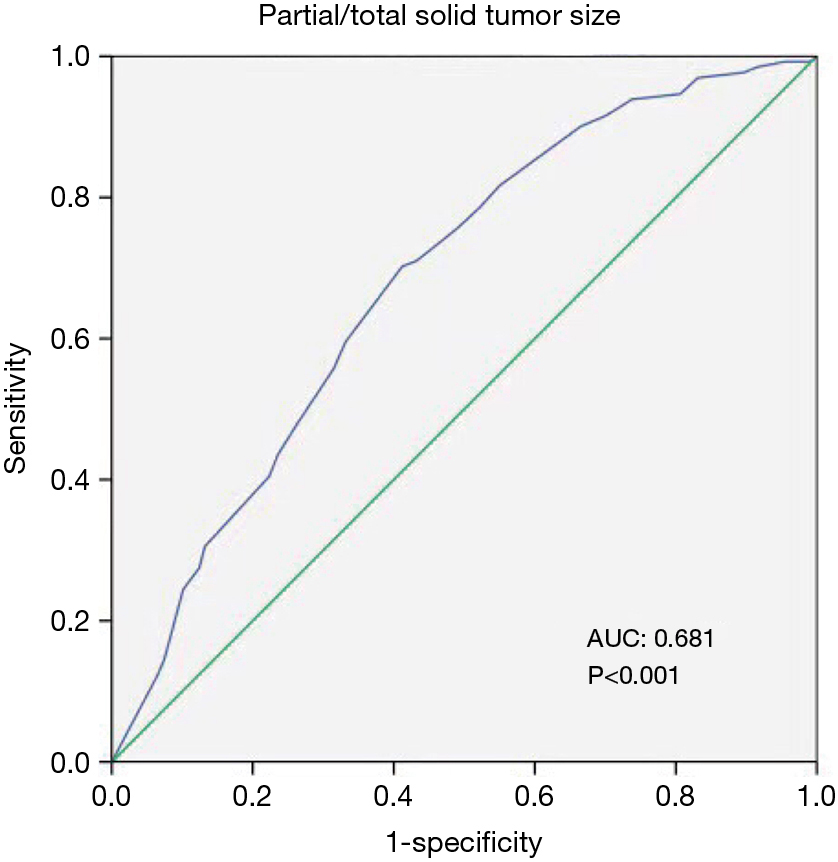 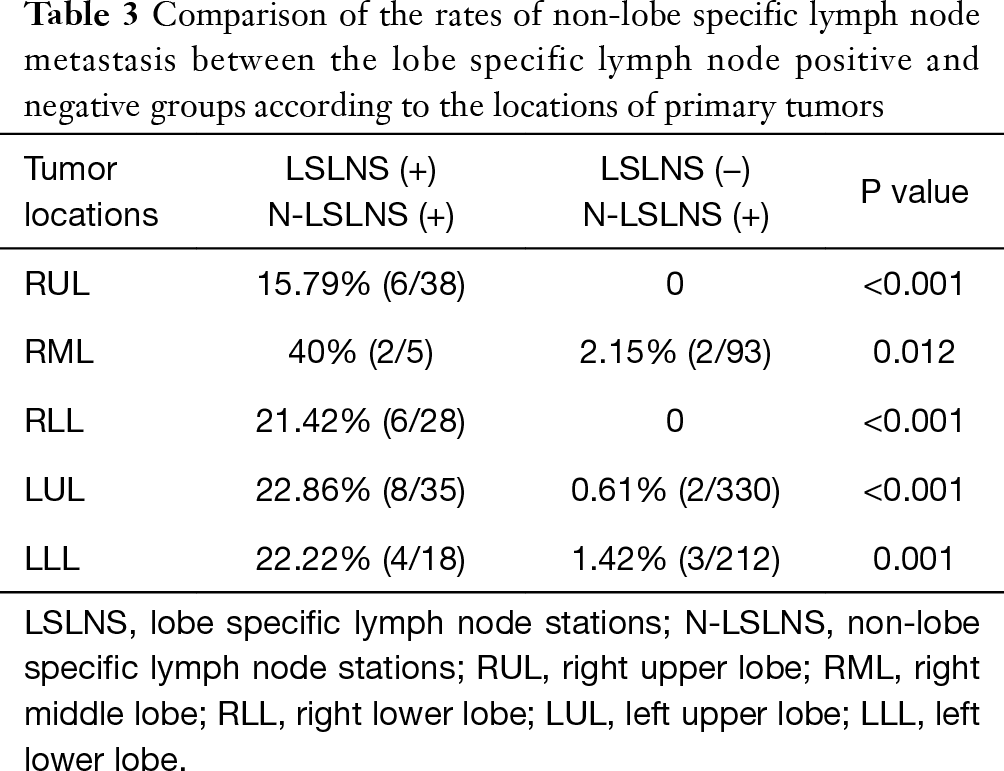 More and more early stage lung cancers without any symptoms have been discovered and diagnosed in recent years due to cancer screening programs for high risk people and annual health check-up using high-resolution CT in China (8). Surgical treatment is still the most effective way to cure the diseases. Up to now, the anatomical lobectomy with systematic lymph nodes dissection either by VATS or thoracotomy is still the most frequently used procedures for early stage lung cancer. Therefore, accurate preoperative assessment of lymph node status is important in order to design the most appropriate treatment regimen for the early lung cancer patients. Unfortunately, it is really difficult to predict the precise lymph node status preoperatively and the postoperative pathologic status of lymph nodes may be different from preoperative prediction (9). For the advanced stage NSCLCs, lobectomy with systematic mediastinal lymph node dissection has been considered to be the standard treatment, however, for the early stage NSCLCs, the optimal lymph node dissection mode has remained to be controversial in clinical practice for many years.

However, there were some limitations in this study. Firstly, this was a single-center, retrospective study. Secondly, only patients with age of ≤75 years were enrolled into this study. Therefore, patient-selection bias may be existed. Prospective multi-institutional studies may be required to validate the risk factors of lymph node metastasis and the practical usage of lobe specific lymph node dissection in clinical stage IA NSCLC in the future.

Funding: This work was supported by Beijing Municipal Science & Technology Commission (Research on the application of clinical characteristics in the capital, grant number: Z141107002514047).

Ethical Statement: This study was approved by the Ethics Committee of Cancer hospital, Chinese Academy of Medical Sciences (No. NCC2014ST-07). All informed patients’ consents were signed and collected preoperatively.