Pectus excavatum (PE) is the most common congenital chest wall deformity, and is characterized by depression of the anterior chest wall and sternum. It can cause patient concerns for cosmetic reasons and can also produce cardiopulmonary symptoms including exercise intolerance, fatigue, dyspnea, and chest pain (1,2). Since its use was first reported in 1998, the Nuss procedure has been used worldwide as a minimally invasive repair for PE. However, despite several studies investigating the effect of the Nuss procedure (2-5), no intuitive method has been described for determining postoperative changes in the thoracic dimensions. The Haller index, which is the ratio of the widest transverse (T) diameter of the chest to the shortest distance between the anterior spine and posterior sternum, has been used to quantify the severity of PE (6,7). However, the Haller index is of limited value because it does not accurately reflect three-dimensional morphological changes in the thoracic cavity before and after the Nuss procedure. We measured the dimensions of the thoracic cavity before and after the Nuss procedure using a simple and intuitive method. We compared changes in these dimensions among patients of different ages, and with different types of PE and different numbers of inserted bars.

We retrospectively evaluated the medical records and computed tomography (CT) scan results of 141 patients who had undergone the Nuss procedure to treat PE at Incheon St. Mary’s Hospital, Korea between July 2011 and February 2016. The inclusion criteria for this study were: patients who underwent the Nuss procedure and who had low-dose chest CT scans covering all areas from the jugular notch to the xiphisternal joint both before and after the Nuss procedure was performed. Low-dose chest CTs were checked to determine postoperative complications such as pneumothorax, hemothorax, pneumonia, lung entrapment between the pectus bar and chest wall, and postoperative morphological changes of the chest wall.

The exclusion criteria were: patients with a cardiorespiratory defect that was not associated with PE and patients who had already undergone a procedure affecting the rib cage. The study was approved by Institutional Review Board (approval number: OC16RISI0042) of College of Medicine, The Catholic University of Korea. Informed consent was waived because the study was retrospective.

Patients under general anesthetic were placed in the supine position with both arms abducted. The crane technique and wire stitches were used to elevate depressions of the sternum (8). Subcutaneous tunneling was performed through stab incisions in the skin on either side of the chest, and hinge points were created. After dissecting the retrosternal space using a needlescope (2-mm mini-fiber telescope; Richard Wolf, Ltd., Knittlingen, Germany) and endoscissors (Richard Wolf, Ltd.), a 20-Fr chest tube was inserted into one incision, and passed across the midline and out through the other incision using a pectus clamp (9). The pectus bar was inserted using the chest tube as a guide and subsequently rotated. The bar was fixed to the ribs on both sides with fixators, and to the anterior chest wall with No. 5 Ethibond sutures (Ethibond Excel; Ethicon, Inc., Somerville, NJ, USA) using the needlescope-assisted 3-point fixation method (10).

The Haller index was defined as the ratio of the anteroposterior (AP) distance between the anterior thoracic wall and the spine to the widest T diameter of the chest (11). The anthropometric dimensions measured were the AP and widest T diameter at three anatomical landmarks (the jugular notch, and manubriosternal and xiphisternal joints; Figure 1).

Statistical analysis was performed using SAS for Windows software (ver. 9.2; SAS Institute, Cary, NC, USA). All data are expressed as medians with ranges. The Wilcoxon signed-rank test was used to compare differences between preoperative and postoperative values. Variables were subjected to Kruskal-Wallis tests to compare differences among groups in patient age, type of PE, and number of inserted bars. Correlations between Haller indices and each anthropometric dimension were calculated using Spearman’s rank-order correlation method. Statistical significance was defined as P<0.05.

The baseline characteristics and demographic data of patients who underwent the Nuss procedure are summarized in Table 1. Of the 141 patients, 87 had symmetric and 54 had asymmetric PE. As shown in Figure 2, the AP diameter at the manubriosternal and xiphisternal joints increased significantly following the Nuss procedure (P<0.0001). Postoperatively, the Haller indices and T diameters decreased significantly at all three anatomical landmarks (P<0.0001, P=0.0084, P<0.0001, and P<0.0001; Table 2, Figure 2). 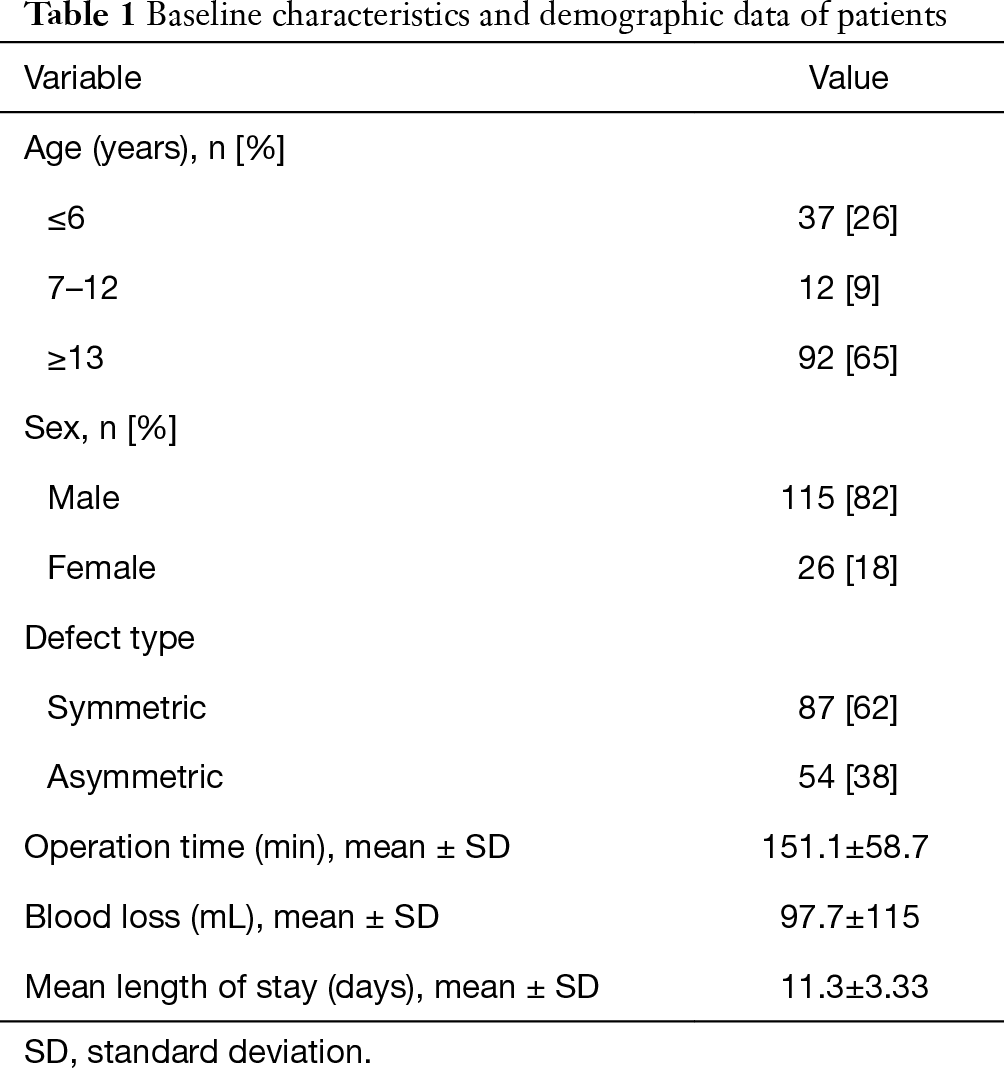 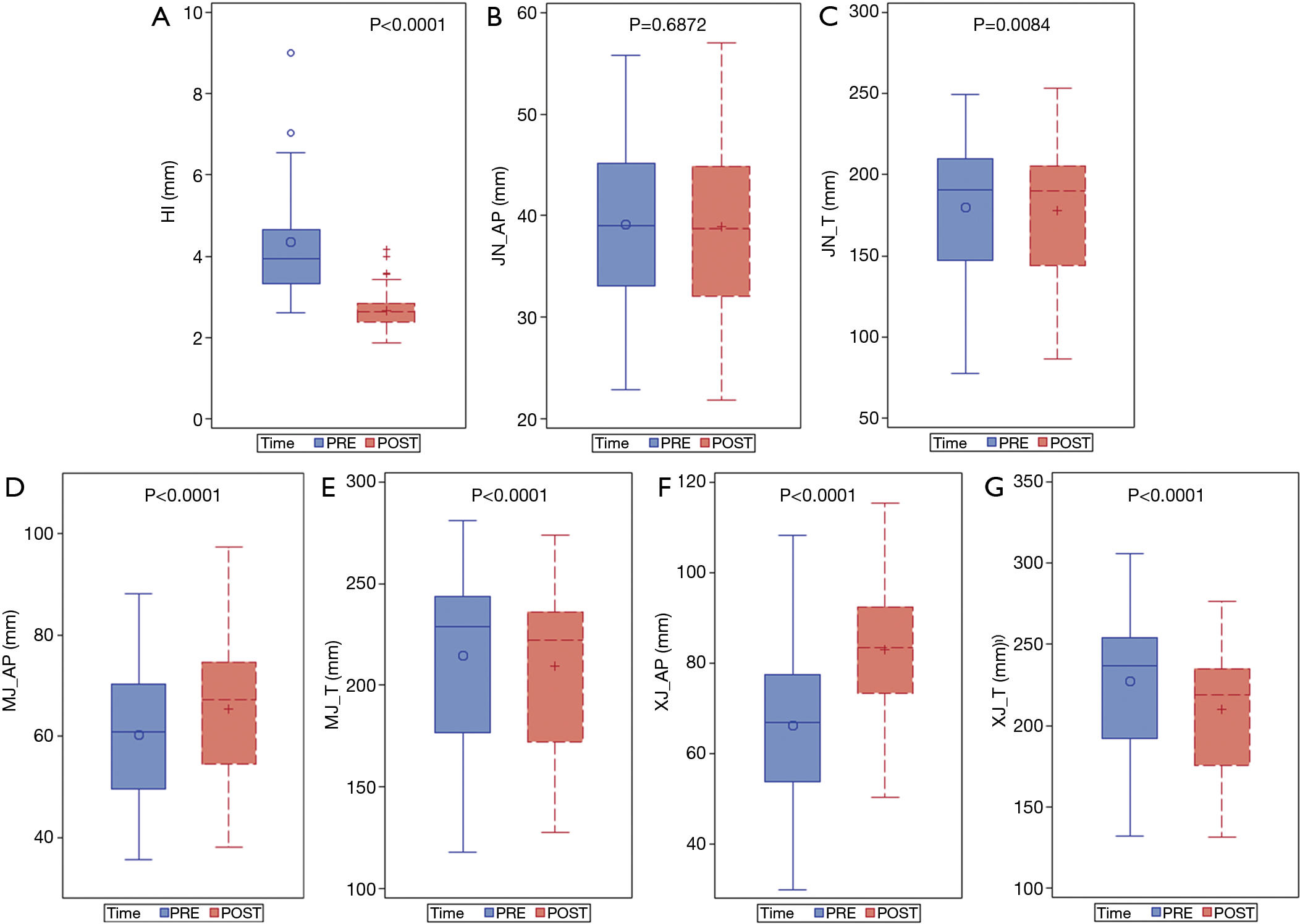 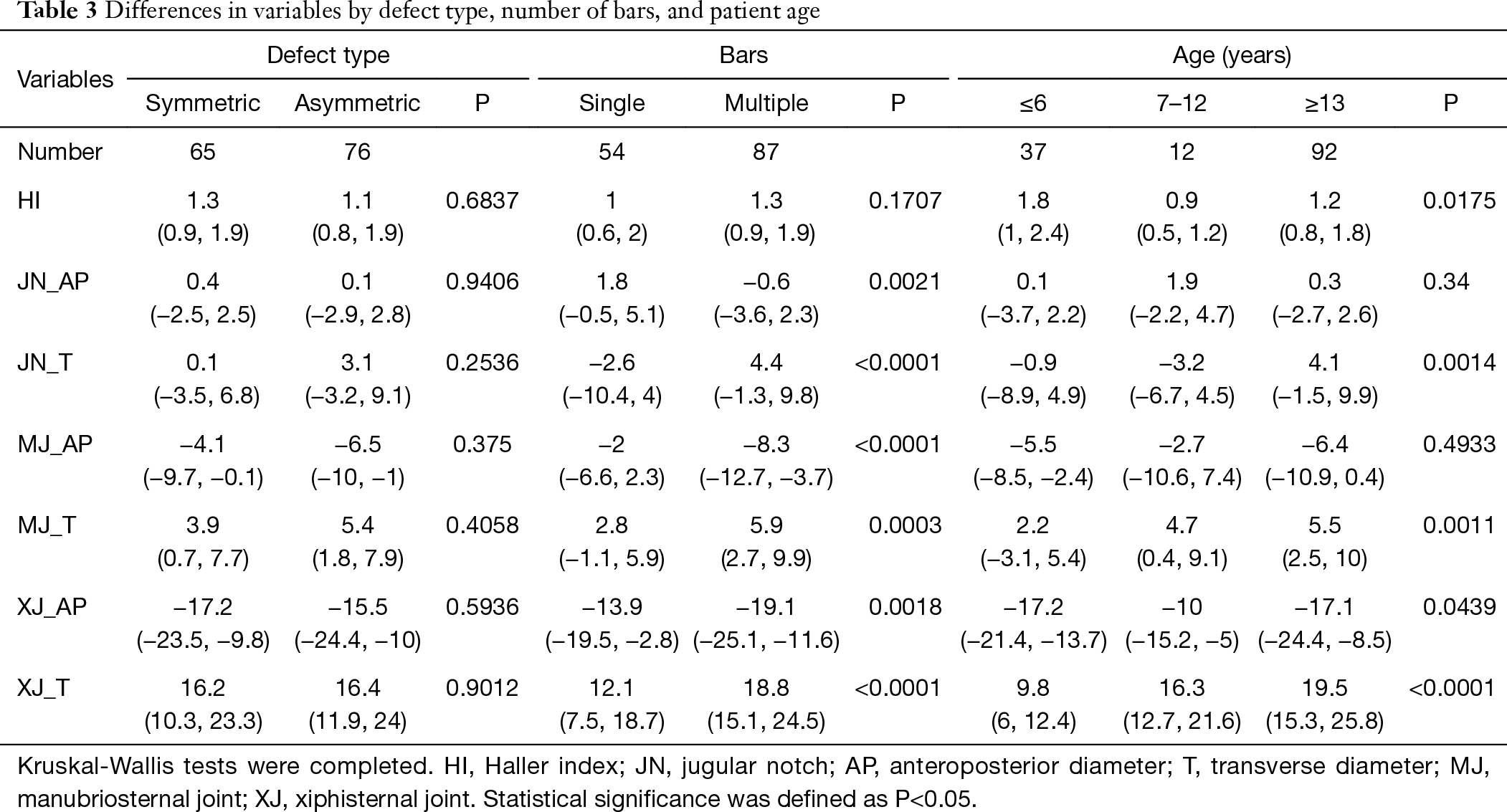 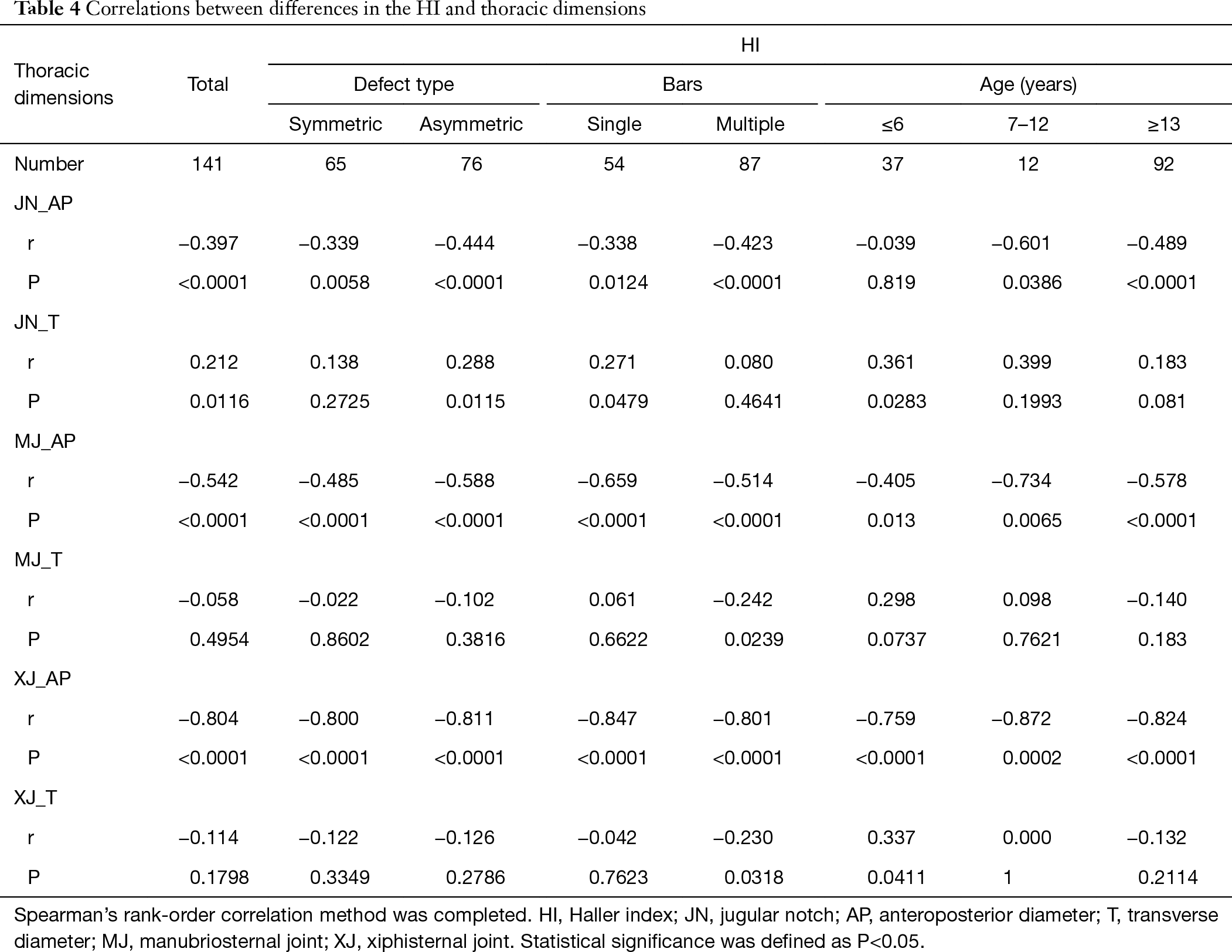 Several indices for quantifying anterior chest wall deformities have been described and these are calculated based on conventional X-rays and CT scans. The Haller index is the most commonly used method for assessing the severity of PE and a value of 3.25 or greater is an indication for surgical correction (6,12,13). The correction index is the difference between two distances: the minimum distance between the posterior sternum and the anterior spine and the maximum distance between the anterior spine and the inner margin of the most anterior portion of the chest. The correction index quantifies the depth of the defect (7). The symmetry of the thoracic cavity is determined by the asymmetric index and the sternal rotation angle, which correlate well with each other (14-16). However, these indices do not reflect the three-dimensional structure of the thoracic cavity, as they are measured at only one cross-section. Three-dimensional images are very useful and can accurately determine the cephalocaudal extent of the depression and morphological changes following an operation (17). However, they require specific devices and analytical software.

Here we describe changes in thoracic dimensions following the Nuss procedure, quantified at three anatomical landmarks using a simple and easily accessible method based on CT axial images. Our results show that the Nuss operation corrected the AP depression at the xiphisternal joint more effectively than at the manubriosternal joint, a result that is consistent with previous studies. Cartoski et al. (14) described the dysmorphology of PE in terms of the asymmetry/symmetry of the depression, localized/diffuse morphology, sternal torsion, the causes of asymmetry, and the length of the depression. Chest wall depressions in PE patients frequently involve the lower part of the sternum (18). The AP depression, measured using three anatomical landmarks, was also corrected more effectively in the multiple bars group compared with the single bar group in this study. This is because long PE depressions require more than two bars to correct (14). The difference between preoperative and postoperative AP diameters in the multiple bars group also increased gradually toward the lower part of the sternum. Elevation of the lower sternum was a major factor in the correction of PE in the multiple bars group if the depression was long, according to the measurements made at the three anatomical landmarks. The lateral dimensions at these three anatomical landmarks also narrowed following the Nuss procedure. This “compensatory narrowing” of the T diameter was particularly significant in the multiple-bars group, and in patients aged above 13 years; in these patients, the T diameter narrowed gradually between the upper and lower sternum.

Sigalet et al. (5) measured reduced dynamic pulmonary function, forced vital capacity (FVC), forced expiratory volume in 1 second (FEV1), and vital capacity (VC) following Nuss repairs of PE. Jeong et al. (19) also reported significantly decreased FVC, FEV1, and VC values after the Nuss procedure in adolescents with PE. These authors thought that this reduced pulmonary function was due to short period for steel strut reshaping of the chest wall (5,20). Compensatory narrowing of the chest width after a depressed sternum has been elevated could be one reason for reduced postoperative pulmonary function, but might also serve to maintain equilibrium in the chest volume after the Nuss procedure.

This study had several limitations. First, it was retrospective in design. Second, we measured changes in thoracic dimensions using AP and T diameters, which may not correlate directly with the volume of the rib cage. Additional studies that examine the relationship between our parameters and chest volume will be needed to validate the results.

In conclusion, we demonstrated changes in thoracic dimensions following the Nuss procedure using a simple and intuitive method. Anterior depression, which is characteristic of PE, was corrected, accompanied by simultaneous compensatory narrowing of the chest after the procedure.

Narrowing of the chest was particularly evident near the lower sternum in the multiple-bars group, and in patients aged above 13 years. Additional studies will be required to determine the effects of changes in thoracic dimensions on pulmonary function and chest volume.

Ethical Statement: The study was approved by Institutional Review Board (approval number: OC16RISI0042) of College of Medicine, The Catholic University of Korea. Informed consent was waived because the study was retrospective.