After obtaining Institutional Review Board approval, we performed a single-institution retrospective review of 173 consecutive patients with ES-SCLC treated between 2010 through 2015. Initial staging assessment was based on MRI, computed tomography (CT), or positron emission tomography (PET)/CT within 3 months of diagnosis. A total of 117 patients were initially diagnosed without brain metastases and received systemic chemotherapy. After excluding patients who received PCI and less than 2 cycles of platinum doublet therapy, 93 patients remained for analysis. Patient records were reviewed for clinical and radiographic features previously identified as relevant baseline risk factors, including age at diagnosis, number and location of metastatic sites defined as sites beyond the primary tumor and regional lymph nodes, T stage, N stage, primary tumor size, performance status, number of systemic therapy cycles, weight loss during chemotherapy, and response to chemotherapy. Response to systemic therapy was assessed by radiographic imaging. Following treatment, a diagnosis of brain metastases was made by either MRI or contrast-enhanced CT.

Statistical analysis was performed using SPSS® version 24.0 (IBM, Chicago, IL, USA). The primary outcome was brain metastasis-free survival (BMFS), defined as freedom from brain metastasis or death from time of diagnosis. Actuarial rates of BMFS were estimated using Kaplan-Meier methods, and log-rank tests were employed to assess differences in rates based on individual variables. Pathologic, clinical, and treatment risk factors found to be predictive on univariable analysis (UVA) were included in the Cox multivariable (MVA) regression model. A two-sided model was used for all tests, with an α (type I) error of <0.05 considered to be statistically significant.

Baseline clinicopathologic characteristics of the cohort (n=93) are shown in Table 1. The median age was 63 years old (range, 39–87 years). There were 39 males (41.9%) and 54 females (58.1%). For the 86 patients in which nodal stage was available, the majority had either N2 or N3 disease (57.0% and 22.6%, respectively). Twenty (21.5%) patients had 3 or more extracranial sites involved with metastatic disease, with the majority of patients having bone (57.0%) and liver metastases (59.1%). All patients received at least 2 cycles of platinum doublet therapy, with the precise number of cycles available for 97% of patients; 67 patients (72.0%) had at least 5 cycles of chemotherapy (Table 2). Response to systemic therapy was available for all but 1 patient; the majority (61.3%) of patients was determined to have a partial response to treatment by radiographic evaluation, while 22.6% showed progression of disease through treatment. 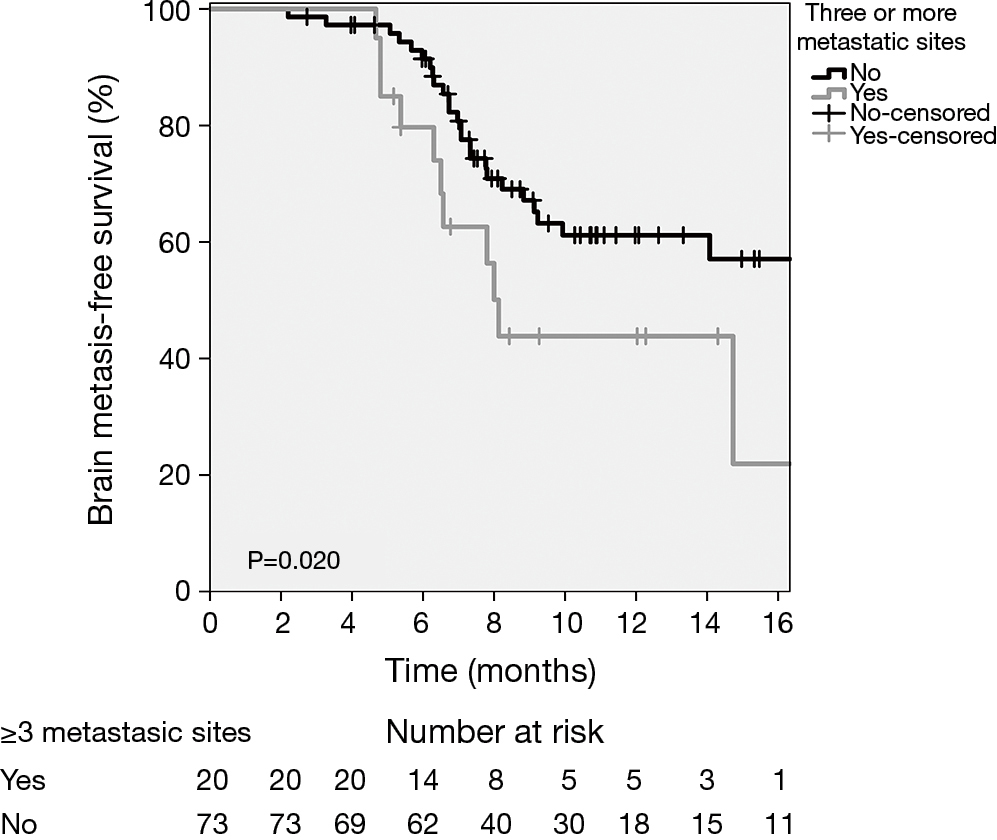 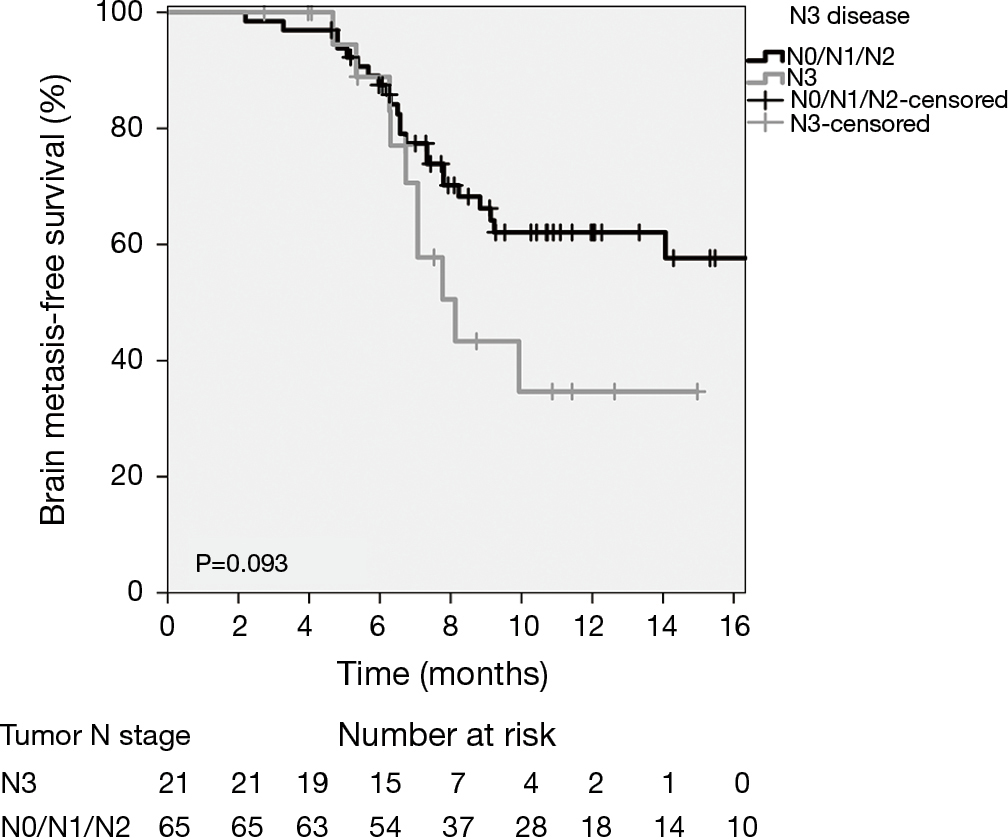 By the time of last follow-up, 80 patients (86.0%) died. There was no significant difference in overall survival between those who developed brain metastases and those who remained free of brain metastases (1-year estimate 47.7% vs. 39.3%; P=0.91).

Forty-four (47.3%) patients underwent brain MRI within 60 days of completion of systemic therapy. Twenty-nine (65.9%) were found to have no evidence of brain metastases. Of these patients, 12 (41.4%) went on to develop brain metastases.

The 2007 EORTC trial showed that PCI for patients with ES-SCLC decreased the incidence of symptomatic brain metastases and improved disease-free and overall survival (5). The criticism of this study is that patients did not receive routine brain imaging prior to the treatment, and therefore a subgroup of patients may have received treatment for subclinical brain metastases, as opposed to undergoing PCI in the absence of radiographic evidence of brain metastases. In contrast, brain MRI was required after initial platinum doublet therapy in the recent trial published by Takahashi et al. (6). In this trial, only those patients without brain metastases on post-chemotherapy MRI were eligible for randomization; patients were randomized to PCI vs. close surveillance MRI every 3 months. Patients randomized to surveillance imaging without PCI subsequently found to have brain metastases were then treated with salvage whole brain radiotherapy (WBRT). The number of patients developing brain metastases who subsequently received salvage WBRT in surveillance arm of the Japanese trial was higher than the observation arm of the EORTC trial (83% vs. 59%, respectively). Utilization of a post-chemotherapy MRI to exclude patients with radiographic evidence of brain metastases prior to enrollment, in addition to early detection of subclinical brain metastases with close MRI surveillance among patients who enrolled but did not receive PCI, may explain the discordant results between these two randomized studies. The conflicting results from these trials have led to a current controversy as to whether PCI should be offered as standard care for ES-SCLC patients who have responded to initial systemic therapy, or whether they should rather be followed with surveillance imaging and salvage WBRT.

In light of these discrepant phase III trial results and in an effort to assess the role of post-chemotherapy MRI among our patient cohort, we evaluated a relevant subset of patients who underwent brain MRI within 60 days after treatment. Approximately 35% of these patients were found to have evidence of new brain metastases at the time of this scan and most patients found to have brain metastases at this time received subsequent WBRT. Based on this finding in our study and in conjunction with the results from the recently published study from Takahashi et al., we believe that future trials evaluating PCI should include restaging MRI following initial systemic therapy prior to PCI randomization. The proportion of patients with negative brain restaging on post chemotherapy MRI who went on to develop brain metastases (41.4%) was consistent with the overall rate in our study (40.9%). Within our patient cohort, negative post-chemotherapy MRI does not appear to reduce the risk of subsequent brain metastases. Very few patients underwent close MRI surveillance imaging after completion of platinum-based chemotherapy, so it is not possible to know if such a strategy might have improved outcomes for patients compared to a strategy that does not utilize routine MRI surveillance imaging.

In our study, extent of disease as determined by the number of involved metastatic sites and less significantly, N3 stage, was independently predictive of a diagnosis of brain metastases. While there was a trend towards developing brain metastases in patients with N3 disease, the relatively few number of events and the absence of nodal status in 7 patients in our study may have contributed to the inability to detect a significant difference in this group. Although individual disease sites were not predictive of brain metastases, the cumulative burden and perhaps lymphovascular spread may be associated with seeding of the CNS. A recent retrospective study from Bang et al. showed the presence of extrathoracic metastases to be an independent predictor (HR 2.59) of shorter time to brain metastasis, though the number of metastatic sites was not quantified (10). The theory that extent of disease in patients with SCLC is predictive of brain metastasis is further supported by two recent studies evaluating this relationship in patients with LS-SCLC. A retrospective study by Farooqi et al. identified primary tumors ≥5 cm to be the only independent risk factor (HR 1.66) for development of brain metastases (7). Wu et al. defined LS-SCLC as T3N3M0 disease or lower and found that stage III disease was predictive of brain metastases when compared with stage I/II disease (HR 2.09) (8). These two studies indicate that in LS-SCLC, where PCI is currently standard of care, individualized discussion of whether to deliver PCI for stage I and II patients should be considered.

This study is limited by its retrospective, non-randomized design, timeframe over which it took place and the absence of restaging and surveillance brain imaging in a significant portion of patients. Despite these limitations, it appears that there is increasing evidence that the extent of disease, defined in our study as ≥3 extracranial distant metastatic sites may serve as a surrogate marker predicting for brain metastases and therefore could be used to personalize decision-making for PCI among patients with ES-SCLC. While surveillance imaging with brain MRI might be most appropriate for patients at low risk for developing brain metastases, those patients at highest risk for developing brain metastases may be best served by a strategy utilizing PCI.

Our results suggest that patients with ES-SCLC and three or more extracranial distant metastases demonstrate an increased risk for brain metastases. In the controversial landscape regarding benefit of PCI for this patient population, utilizing this clinical biomarker may assist PCI decision-making on an individual basis. Further validation of this biomarker is necessary to demonstrate its utility and additional approaches aiming to measure disease extent such as quantification of extracranial tumor volume based on CT or PET datasets may offer more robust tools to improve brain metastasis risk estimates.

Ethical Statement: This study has been approved by an institutional review board (approval # Pro00028085); as patient data was de-identified, the study was exempt from requiring written informed consent.