A GGO lesion at S9+10 of left lower lobe in a 66-year-old male patient was identified 12 months ago. The lesion was found increased by a follow-up CT scan. A three-dimensional (3D) reconstruction of lung by the chest CT scan was performed to identify the location of the lesion and the possible variations of the pulmonary vessels and bronchi. We made a surgical plan of a VATS Left S9+10 segmentectomy on this patient (Figure 1). 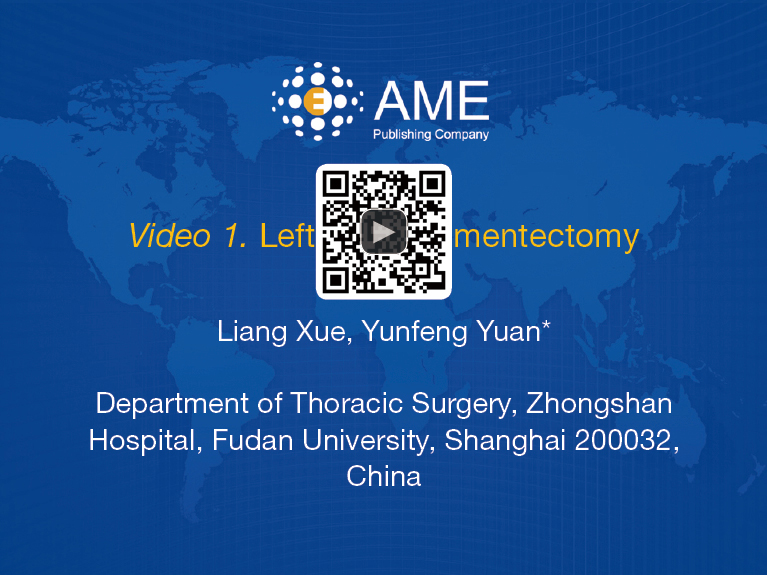 The whole left lung was inflated with pure oxygen and then deflated for 15 minutes. The inflation-deflation line was clear between S8 and S9+10. The intersegmental plane of S9+10 and S8 was divided along the V8b and also along the inflation-deflation border line firstly using electrocautery and then an endostapler. Intraoperative frozen sections revealed a pathological diagnosis of invasive adenocarcinoma with no segmental lymph nodes involvement. A systematic lymph node dissection was then performed.

After S9+10 resection, S8 and S6 were separated. V6 and V8 were identified and preserved on the intersegmental plane of S6 and S8 separately (Figure 2).

Several literatures have showed that segmentectomy can achieve equivalent therapeutic effect to lobectomy for stage IA lung cancer (2-4). But the major defects, such as the wrong division of segmental vessels or insufficient resection margin distance, can cause unnecessary harm to the patients and even endanger the treatment value of the procedure for the lung neoplasm. These defects should be avoided as far as possible. The S9+10 segmentectomy of the lower lobe is a complicated type of segmentectomy which includes division of two intersegmental planes (5). The variations of the pulmonary vessels in the lower lobe are very common. The identification of the target segment with enough resection margin distance and the complete understanding of the variation pattern before surgery are recommended for a smooth and accurate S9+10 segmentectomy. We referred to the preoperative 3D reconstruction of the lung by CT scan (6) to achieve these targets. In this case, we found segmentectomy of the S9+10 to be the proper surgery for its satisfaction of complete removal of the lesion with enough resection margin distance. We also detected the proper branching pattern of the vessels and bronchi preoperatively with this tool. We use a sculpting manner (7) to perform the biopsy of the whole lower lobe. Every important structure was compared with the 3D reconstruction image and identified before being divided. This manner helps to preclude any major default in dividing the target segmental vessels or bronchi.

Dr. Yunfeng Yuan was granted the Award of Excellence in the 2017 VATS Lobectomy & Segmentectomy Video Contest.