Endobronchial tuberculosis (EBTB) is defined as tuberculous infection of the tracheobronchial tree (1). It is always a sequela of pulmonary tuberculosis (TB) (2) and is difficult to diagnose because of the lack of evident imaging findings and thus delaying treatment. During its courses, significant bronchus stenosis may develop (2-4). Endoscopy is by far the best modality to diagnose EBTB (5,6). Fibrostenotic EBTB is one subtype of EBTB (4), for which interventional therapy is the first choice. When bronchial lumen fibrosis exists alone without mucosa edema or hyperemia, inactive fibrostenotic EBTB is usually considered that needs no anti-tuberculosis (anti-TB) treatment.

A 26-year-old man presented with several months of cough and predominantly dyspnea, without fever, night sweats or hemoptysis. He had a history of pulmonary TB which was “cured” by anti-TB drugs 10 years ago without coniosis or smoking history.

In order to identify the cause, chest radiographs and chest computed tomography (CT) scans were completed immediately. Atelectasis in the left lung and severe stenosis of the left main bronchus were discovered (Figure 1). Therefore, bronchoscopy was performed to investigate possible cause of left main bronchial stenosis. It revealed serious fibrous stenosis of the left main bronchus with black mucosal hyperpigmentation but without hyperemia, edema or necrosis of mucosa (Figure 2). Mucosal biopsy obtained from the narrowed left bronchus near hyperpigmentation was negative for Mycobacterium TB. Meanwhile, sputum examination for acid fast bacilli (AFB) was also negative and erythrocyte sedimentation rate (ESR) was normal. Based on these clinical data, there is no definitive evidence for active TB, therefore, patient was diagnosed with fibrostenotic EBTB at first. Interventional therapy was the first choice for enlarging the lumen of bronchi in fibrostenotic EBTB patient with bronchial stenosis. We used electrocautery for the first time to expand narrowed bronchial lumen. Then the patient underwent repeated cryotherapy every 3–7 days for the next 3 months.

Figure 1 Imaging findings before treatment. (A) Chest radiograph: left shift of trachea, the presence of complete collapse of left lung with a bronchial cut-off sign; (B) CT scan: slight collapse of the left side of the chest, atelectasis in the total left lung, serious stenosis of the left main bronchus (red arrow). 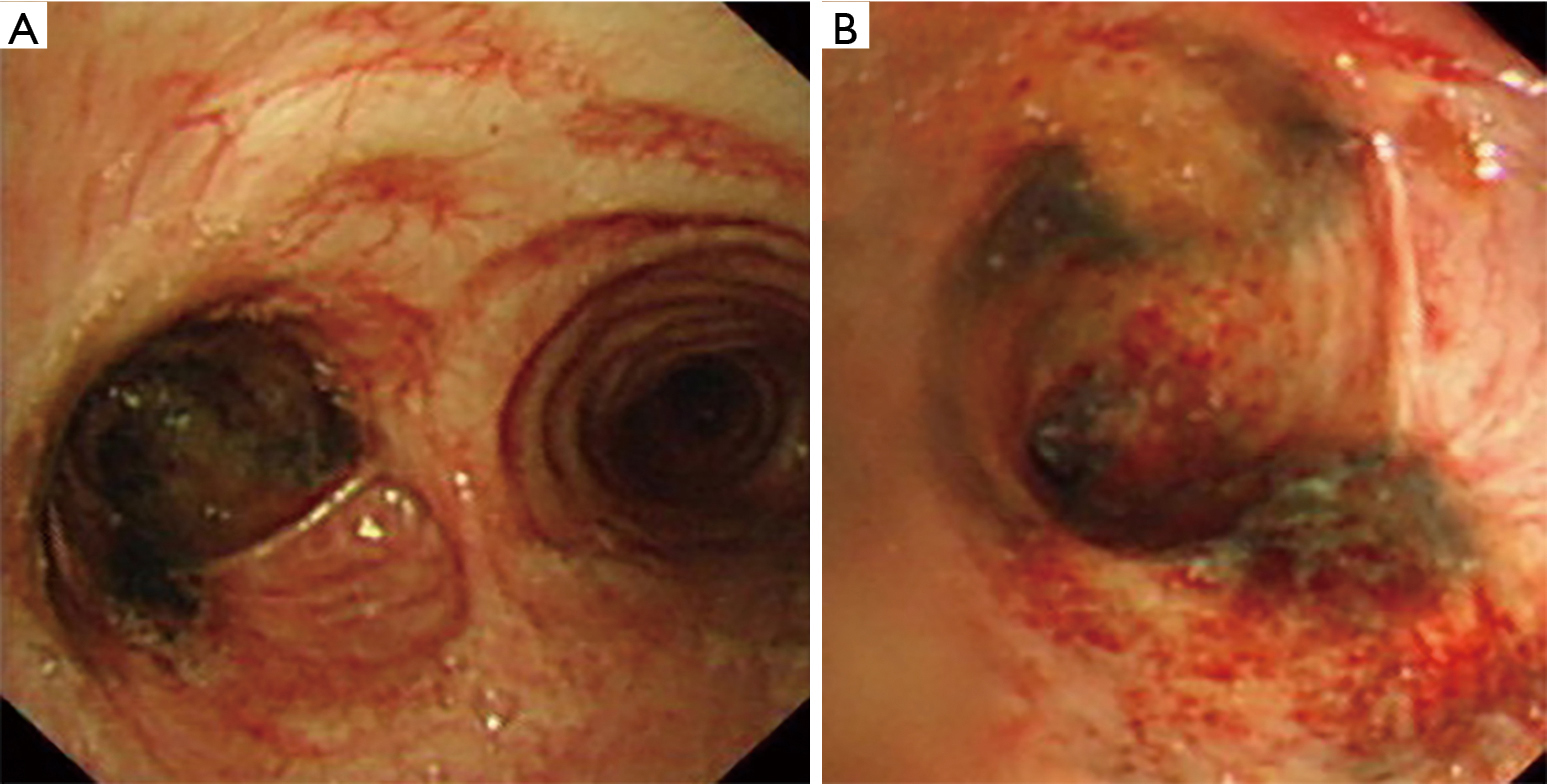 However, the left main bronchial stenosis continued to progress. Active EBTB was considered even lacking of etiological evidence in this situation. Hence, diagnostic anti-TB treatment combined with intermittent cryotherapy was performed regularly. The anti-TB treatment included isoniazid (H) 0.3 g qd, rifampicin (R) 0.6 g qd, pyrazinamide (Z) 0.45 g tid, ethambutol (E) 0.75 g qd for the first 2 months. After 1 month of anti-TB treatment, chest X-ray and CT scan showed that the left lung collapse was no longer present (Figure 3), and bronchoscopy revealed that the stenosis of the left main bronchus improved slightly and that hyperpigmentation of associated mucosa slightly decreased (Figure 4). With this favorable result, HR (H 0.3 g qd, R 0.6 g qd) was prescribed for the next 10 months, the total course of anti-TB treatment was 12 months. The intermittent cryotherapy was performed every 3–7 days in the beginning, and the treatment interval was gradually extended to every month. Until the condition was stable, cryotherapy was stopped completely.

Figure 3 Imaging findings after one-year treatment of anti-tuberculosis and cryosurgery. (A) Chest radiograph: the left lung collapse was no longer present; (B) CT scan showed that the left main bronchus was enlarged significantly (red arrow) and the left lung re-expanded completely. 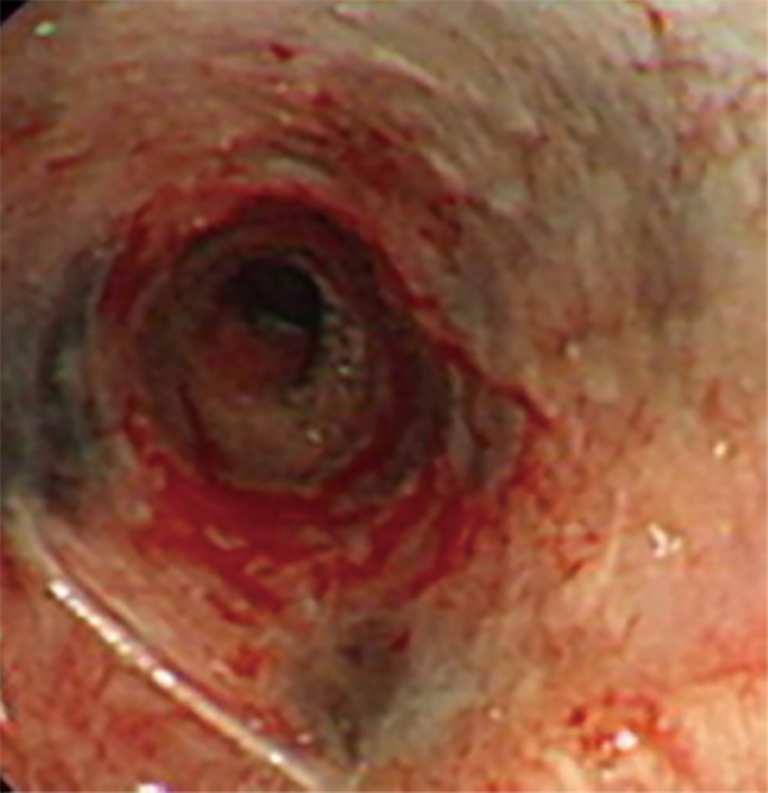 One year after anti-TB treatment combined with intermittent cryotherapy, hyperpigmentation of the left main bronchus improved significantly and stenosis of the left main bronchus enlarged remarkably (Figure 5). The patient led a normal life lives without cough and dyspnea and the stenosis at 2 years follow up. And black mucosal hyperpigmentation was reported no aggravation.

Eradication of tubercle bacilli and prevention of bronchial stenosis are two important goals of treatment in EBTB. In this case, this patient had left main bronchial cicatricial stenosis and associated atelectasis of left lung in bronchoscopy. He had a history of TB, but no history of smoking or coniosis, so EBTB should be considered. However, this patient had no significant symptoms of active TB, such as fever, night sweats or hemoptysis. ESR was normal. Sputum examination for AFB and histopathological examination of mucosal biopsy for TB were also negative. Besides fibrotic lumen, there was no obvious hyperemia, edema or necrosis of the narrowed bronchus, which did not support a diagnosis of active EBTB. So it was easy to be misdiagnosed as inactive EBTB in this type of patients (12).

However, there is a potential connection between endobronchial anthracofibrosis and TB that is gradually being discovered. Previous case report concluded that in patients with no history of occupational exposure, airway hyperpigmentation, associated with enlarged adjacent lymphadenopathy, should raise the suspicion for active Mycobacterium tuberculosis (MTB) (13). And also, in prior studies, 20% to 60% of patients with anthracofibrosis were found to have MTB (10). And It is now documented that anthracofibrosis is associated with TB in approximately one third of active EBTB patients (11). Paulin et al. also suggested in the correct clinical setting, flat, friable, darkly pigmented submucosal lesions seen during bronchoscopy should alert the physician to the possibility of an active MTB infection (14).

In this case, although AFB was negative, it might be due to low positive rates of sputum in EBTB (15). Despite there was no lymph node enlargement in this patient, black mucosal hyperpigmentation was observed seriously. Besides, even repeated cryotherapy was performed, the stenosis of left main bronchus was still progressing. Because of these reasons, active EBTB could not be completely excluded.

This adverse situation led us to reflect that whether there were other factors accounted for this poor prognosis. Since there have been potential relations among EBTB, endobronchial anthracofibrosis and tracheobronchial stenosis we just mentioned above, active EBTB should be considered even lacking of etiological evidence in this situation. So, a diagnostic anti-TB treatment was started promptly.

We just chose electrocautery for the first time to expand narrowed bronchial lumen for its risks and shortcomings, such as bleeding, airway fire and so on (16). But we used cryosurgery for long term treatment in this case because cryosurgery only causes necrosis of the local mucosa. It is safe and can be repeated both for benign and malignant tracheobronchial stenosis. In combination with diagnostic anti-TB treatment and cryotherapy, the left main bronchus stenosis of the patient increasingly expanded and the interval between cryotherapy was prolonged gradually.

One year after treatments with anti-TB and cryosurgery, black hyperpigmentation in affected airway disappeared, and the stenotic left main bronchus enlarged significantly. Yet bronchial lumen dysmorphia was left. This suggested that the treatment was effective in this patient.

This case report pointed out the potential relation between active EBTB and endobronchial anthracofibrosis. Even without etiological evidence, active EBTB should be taken into consideration if it presented with stenotic bronchus and endobronchial anthracofibrosis. Given our favorable outcome, there might be an indication of therapeutic trial of anti-TB medication in case of repeated bronchial stenosis due to anthracofibrosis in patients with past history of TB and other causes are excluded. Yet, the recommendation of aggressive treatment should reply on the effect of diagnostic treatment and further research.