The management of T1 esophageal carcinoma remains controversial (1-3). Esophagectomy with radical lymphadenectomy have been considered the treatment paradigm for such patients. To achieve a less invasive and better quality of life, endoscopic therapies for T1 esophageal carcinoma have been increasingly used (4,5). And the advanced therapeutic endoscopic techniques can, resection of superficial lesions and ablation of residual mucosa, preserving esophagus without radical resection that performed with lower mortality and morbidity (6,7).

However, the application of these procedures has been limited by without lymph nodes removed, possibility of region lymph node metastasis (LNM) in T1 esophageal carcinoma (8). Due to the abundant lymph-capillary plexus in the lamina propria mucosa and submucosal layer of esophageal, the frequency of LNM is up to 54% in patients with tumors involving submucosal layer (9). Radical lymphadenectomy to harvest all potentially involved nodes is greatly important for curative treatment (10,11). Therefore, it is essential to construct effective model for predicting the risk of LNM before making therapeutic procedures.

The nomogram is reliable as a statistical predictive model which created a simple intuitive graph that accurately clarity the risk of a clinical event (12,13). In present study, we aimed to identify the independent factors that predicted LNM in patients with T1 esophageal squamous cell carcinoma (ESCC). A nomogram model for predicting the potential risk of LNM was then useful to support clinicians in individually therapeutic recommendations.

The linearity assumption in continuous variables was examined with restricted cubic splines. The associations of the risk of LNM in patients with T1 ESCC with clinical characteristics were evaluated using univariate logistic regression analysis. The significant variables with P values less than 0.05 were entered into the multivariate logistic analysis to identify the independent risk factors for LNM. On the basis of results from the multivariable analysis, a nomogram for LNM probability was constructed using a backward step-down process with Akaike information criterion (AIC).

The statistical analyses were performed using the SAS 9.4 (SAS Institute Inc., Cary, NC, USA). The standard Chi-square test or Fisher’s exact test was used for comparative analysis. Univariate and multivariate logistical regression analyses were performed to predict the risk factors of LNMs. A nomogram, ROC and calibration curves were done with R 3.4.1 (The R Foundation for Statistical Computing, Vienna, Austria). For all the analyses, the results of P<0.05 was considered to be statistically significant. 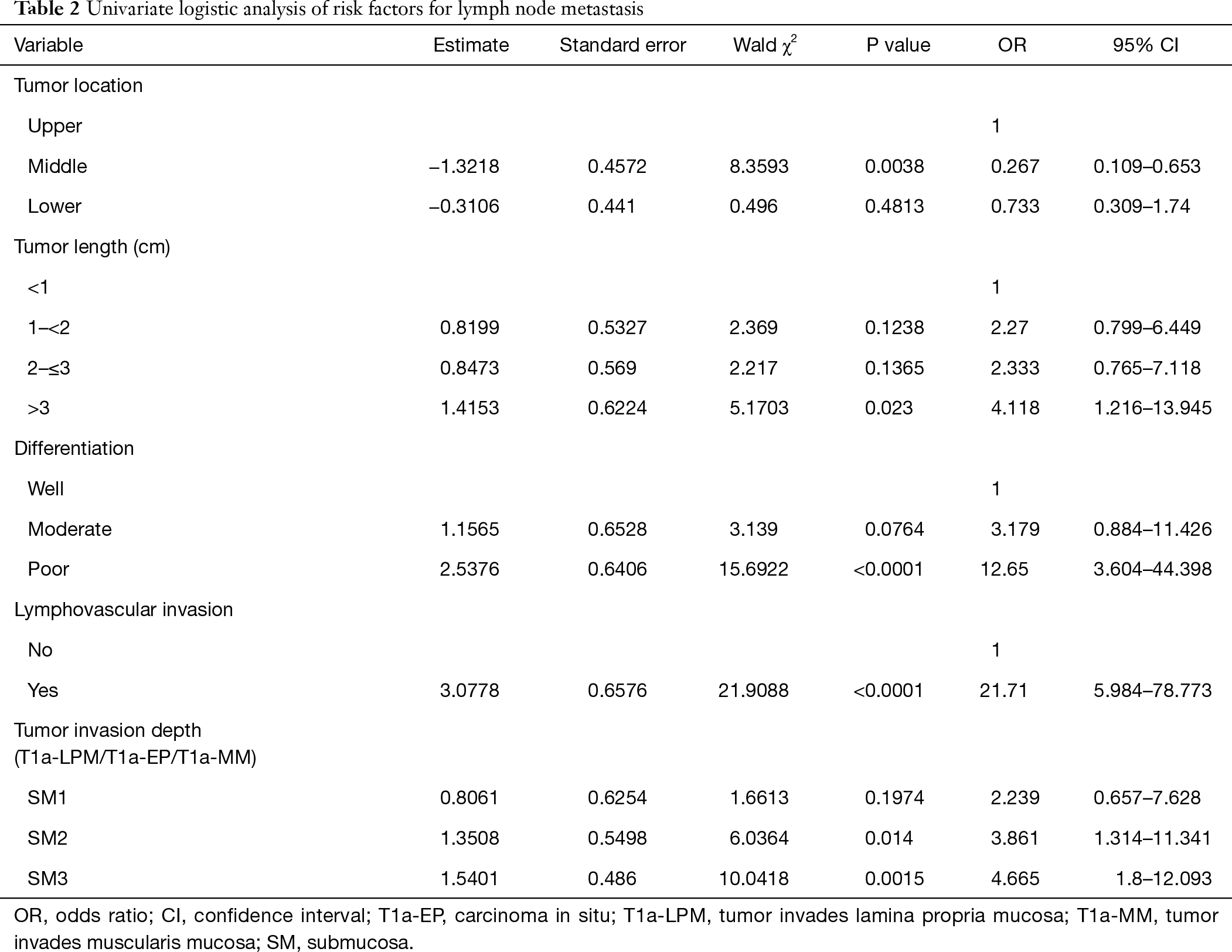 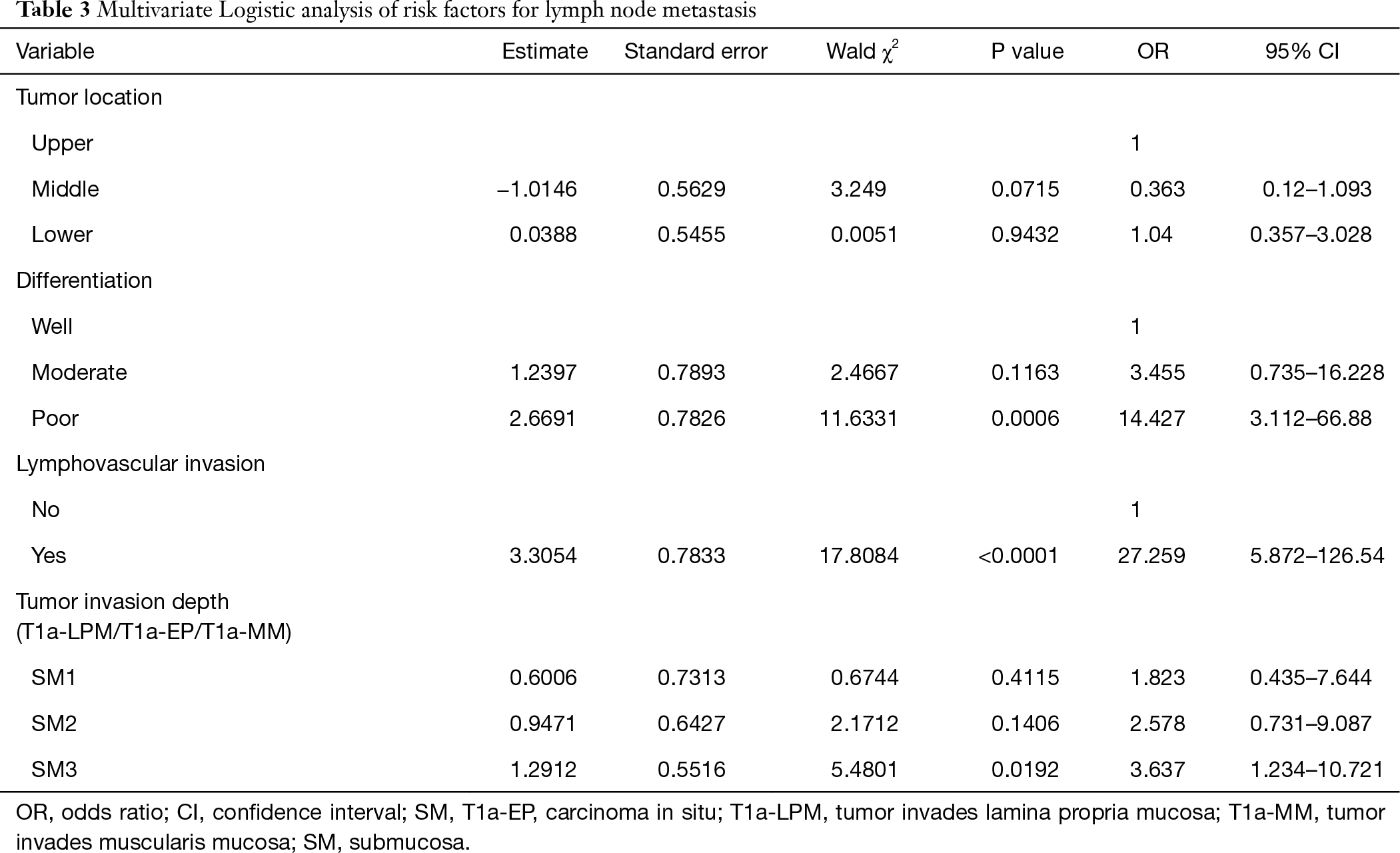 Predictive nomogram model for the probability of LNM

For predicting the risk of LNM, the four significantly independent risk factors were incorporated by constructed a nomogram (Figure 1). A total score was calculated by tumor location, differentiation, lymphovascular invasion and tumor invasion depth. A score was respectively given on the point scale axis. A total score could be easily calculated by adding each single score and, by projecting the total score to the lower total point scale, we were able to predict the probability of LNM. 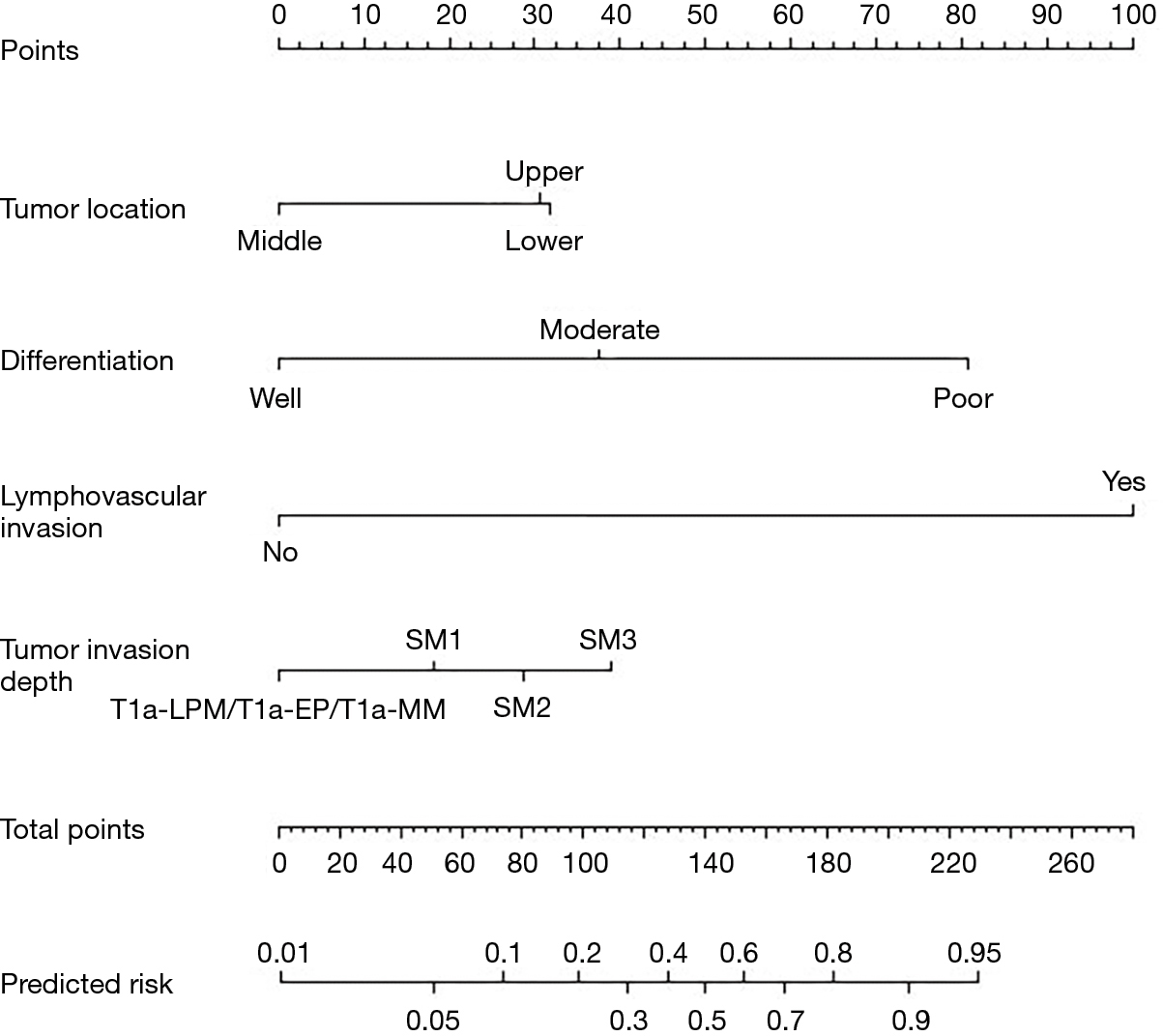 Performance of the nomogram

The ROC analysis is showed in Figure 2, which demonstrates nomogram has a robust discrimination, with an area under the receiver operating characteristic curve (AUC) of 0.8667 (Figure 2). According to the calibration curve, the LNM probabilities predicted by the nomogram consisted with the actual probabilities (Figure 3). 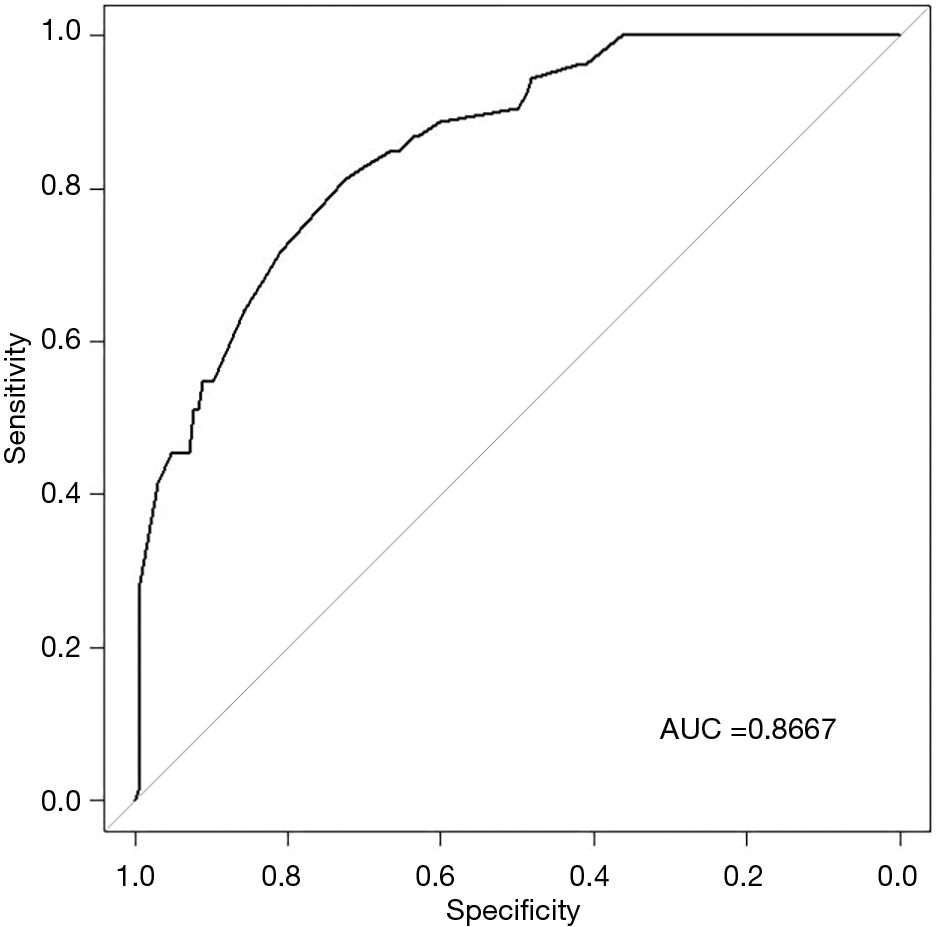 Figure 2 The receiver operating characteristic (ROC) curve for the nomogram. The area under the ROC curve (AUC) =0.8667. 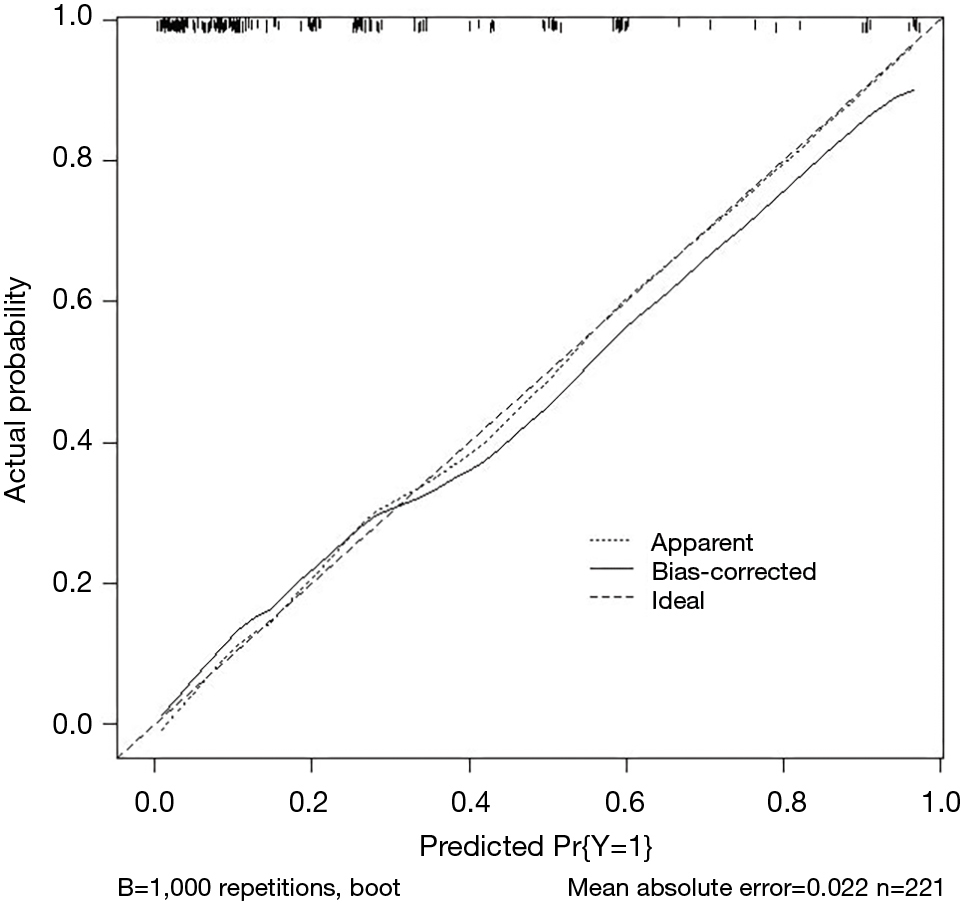 The management of patients with T1 esophageal carcinoma is controversial (1-3). In present study, we use a simple and intuitive graph of a statistical predictive model which predicting the possibility of LNM and thereby may support theoretical and evidential recommendations to clinicians when making appropriate treatment. We demonstrate that the poor differentiation (P=0.0006), lymphovascular invasion (P<0.0001) and SM3 (P=0.0192) were significantly independent risk factors for LNM.

Compared to esophagectomy, endoscopic therapies have the advantages of a less invasive, lower postoperative complications and better quality of life (4,5,7). Ell and colleagues reported that endoscopic therapies in superficial esophageal carcinoma had the results of practically zero mortality and very lower morbidity (7). However, an indiscriminate use of endoscopic therapy may decrease the survival of such patients, because of no lymph nodes removed and possibility of nodal metastasis (18,19). And adjuvant therapies should be offered for a survival benefit in patients with LNM after surgical pathologic examination (20). Therefore, it is necessary to understand the prevalence and risk of LNM in patients with T1 esophageal carcinoma (21,22).

Our analysis of population-based date shows that the prevalence of LNM is relatively high: about 24% of all patients with surgically resected T1 ESCC suffered LNM. We have found the frequency of LNM was 8.1% in patients with intramucosal cancer (no LNM in T1a-LPM/T1a-EP), and 30.3% in patients with submucosal cancer. Results of prevalence of LNM were generally consistent with previous studies (12,23,24). Some studies demonstrated there was no risk of LNM in intramucosal cancer (25,26). Nowadays, the diagnostic procedures and immunohistochemical predictors are unreliable for predicting nodal metastasis (27-29). In our nomogram, the lymphovascular invasion is the greatest contributor to the risk of LNM, followed by differentiation and tumor invasion depth. Tumor location was the smallest effect on the risk of LNM.

Several limitations in our study should be addressed. First of all, we analyzed data only from the patients who underwent surgically resected T ESCC, patients who not undergo a resection were excluded, result in selective bias. In addition, considering the differences in epidemiology and clinical behavior that exist between ethnic groups, the generalizability of this nomogram still requires external validation using additional databases (30). Finally, our predictive model is constructed by retrospective data and the results should been validated in another population.

In conclusion, our results show the middle tumor location, poor differentiation, lymphovascular invasion and SM3 were significantly independent risk factors for LNM. The nomogram model is greatly convenient, highly accurate, excellently calibrated. This nomogram might usefully help clinicians to make individualized predictions of each patient’s probability of LNM and to improve treatment recommendations for patients with a T1 esophageal carcinoma.

Funding: Supported by the National Natural Science Foundation of China (Grant No. 81400681) and the Ningbo Medical Center Lihuili Eastern Hospital (Grant No. 2017DYKY05).

Ethical Statement: This study was approved by the Ethics Committee of The Zhongshan Hospital and Ningbo Medical Center Lihuili Eastern Hospital (No. 2017236).