Whole lung computed tomography (CT) is included in the routine workup in the preoperative assessment of patients undergoing surgery for lung cancer. The main aim of whole lung scanning may be to identify intrapulmonary small metastasis and regional lymph node swelling (1). The secondary aim may be to make a structural assessment of the lung to identify the presence or absence of underlying lung diseases, such as pulmonary emphysema, fibrosis, or interstitial lung disease, as well as to investigate the anatomical variation of the pulmonary bronchovasculature (2). Unfortunately, whole lung CT is not used to quantify the global lung function. Due to technological improvement in computer software programs, the volume of the diseased lung and normal lung can be obtained separately by defining the threshold CT attenuation values in the normal lung and the diseased lung. The aim of the present study was to clarify the role of CT in the functional assessment of patients undergoing lung cancer surgery.

We retrospectively reviewed our prospectively-collected institutional database of 290 patients who underwent major lung resection for primary lung cancer between January 2006 and December 2012. This study was approved by our institutional review board (H22482). We obtained the following patient data: age, gender, height, smoking habit, Eastern Cooperative Oncology Group-performance status (ECOG-PS) (3), Fletcher-Hugh-Jones classification of dyspnea (F-H-J classification), spirometric variables, and quantitative CT-derived parameters, as described below. The data from the 290 patients were used to clarify the relationship between CT-derived parameters and other conventional parameters, as well as to develop a regression equation for forced vital capacity (FVC) and forced expiratory volume in 1 second (FEV1) using CT-derived parameters and other demographic variables (development cohort). Table 1 shows the characteristics of the patients in the development cohort (n=290). We subsequently reviewed an additional 100 patients who underwent lobectomy for primary lung cancer in a referral hospital during December 2013 and December 2014. These data were used to confirm the validity of the regression equation that was generated based on the development cohort (validation cohort). Table 1 shows the characteristics of the patients in the validation cohort (n=100). Postoperative complications, especially postoperative cardiopulmonary complications, were defined as complications of Clavien-Dindo Grade ≥2 (4,5). Postoperative cardiopulmonary complications were considered to be complications that arose during hospitalization or within 30 days after an operation. Cardiopulmonary complications included pulmonary complications, such as pneumonia, empyema, acute respiratory distress syndrome (ARDS), atelectasis, acute exacerbations of interstitial pneumonia, prolonged mechanical ventilation. In contrast, cardiovascular complications included arrhythmias (atrial fibrillation, paroxysmal supraventricular tachycardia, ventricular tachycardia), myocardial infarction, angina pectoris, congestive heart failure, and thromboembolic events. Operative mortality was defined as any death that occurred within 30 days after surgery. The smoking data included the pack-years (PY) smoked (the average number of packages of cigarettes smoked per day multiplied by the number of years that the individual smoked).

Operability was determined based on the existing guidelines for pulmonary resection (6). The operation was basically performed via three or four ports (1–3 cm), without rib spreading. During lobectomy, we used an endoscopic stapler (Ethicon, Cincinnati, OH, USA, or Covidien, Minneapolis, MN, USA) to divide the fused fissures and to excise the pulmonary artery, vein, or bronchus. All patients received epidural analgesia or an intercostal nerve block for pain control.

The preoperative spirometric variables were obtained within 1 month before surgery and included FVC and FEV1. The % predicted FVC (%FVC) and % predicted FEV1 (%FEV1) are expressed as the percentage of the predicted value for age, gender and height. The % predicted postoperative FEV1 (ppo%FEV1) was derived using the anatomic method in which the preoperative %FEV1 is multiplied by the fraction of the functional lung sub-segments that were expected to remain after lobectomy or segmentectomy. The ppo%FEV1 values were calculated using the following equation: ppo%FEV1= measured %FEV1×(42—number of segments resected)/42. The number of segments that were expected to be resected was set at 6 for right upper lobectomy, 4 for middle lobectomy, 12 for right lower lobectomy, 10 for left upper lobectomy, and 10 for left lower lobectomy.

Helical CT scans were performed using a 64-detector CT scanner (Somatom Definition or Sensation 64; Siemens, Erlangen, Germany). With the patient in the supine position, we obtained 1-mm high-resolution CT images of the entire lungs during a deep inspiratory breath hold. We used a 512×512 matrix, 2-mm collimation, and a scan time of 1.0 s, at 120–130 kVp and 220–230 mA.

Image interpretation and the data analysis

Three-dimensional (3D) volume rendering lung images were created using a commercially available imaging software program (AZE, Virtual Place Raijin, Tokyo, Japan). Threshold limits of −600 to −1,024 Hounsfield unit (HU) were applied to segment both whole lungs and to exclude the soft tissues surrounding the lungs and the large vessels, atelectasis, fibrosis and tumors within the lung. The volume of a whole lung that is segmented by certain threshold limits can be readily obtained with an imaging software program. We referred to the volume of the whole lung (−600 to −1,024 HU) as the total lung volume (TLV). The whole lung was divided into two areas: the low-attenuation area (<−910 HU), representing the emphysematous lung area, and the remaining areas (−600 to −910 HU), which represented the normal lung fields (7). The emphysematous lung volume (ELV) was defined as the sum of the emphysematous area of the whole lung.

The results from the development cohort 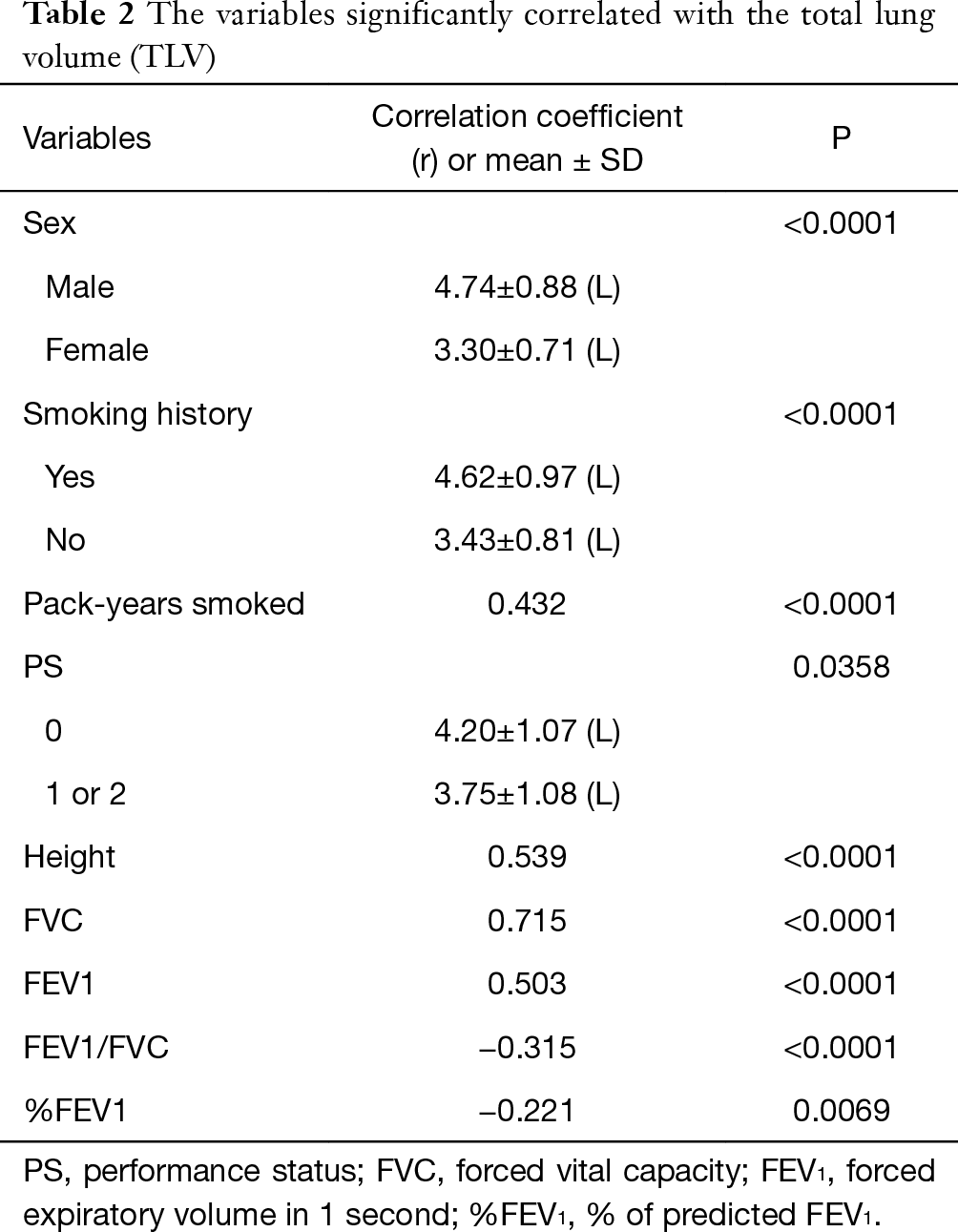 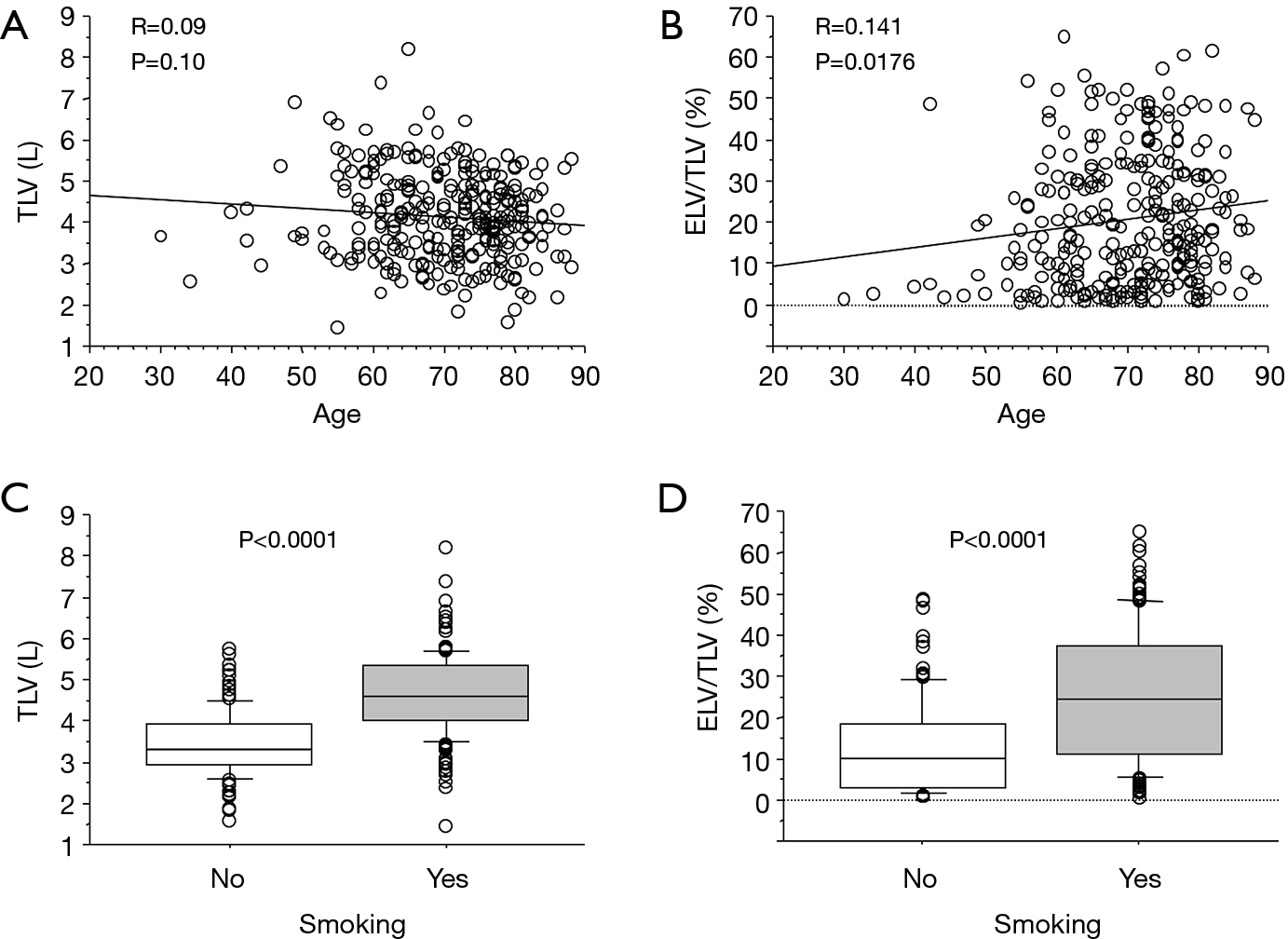 Figure 1 The impact of age and smoking on the computed tomography-derived parameters [total lung volume (TLV) and emphysematous lung volume to total lung volume (ELV/TLV)]. ELV/TLV was correlated with age but TLV was not (A,B). On the other hand, both the TLV and ELV/TLV values in smokers were higher than those in non-smokers (C,D). 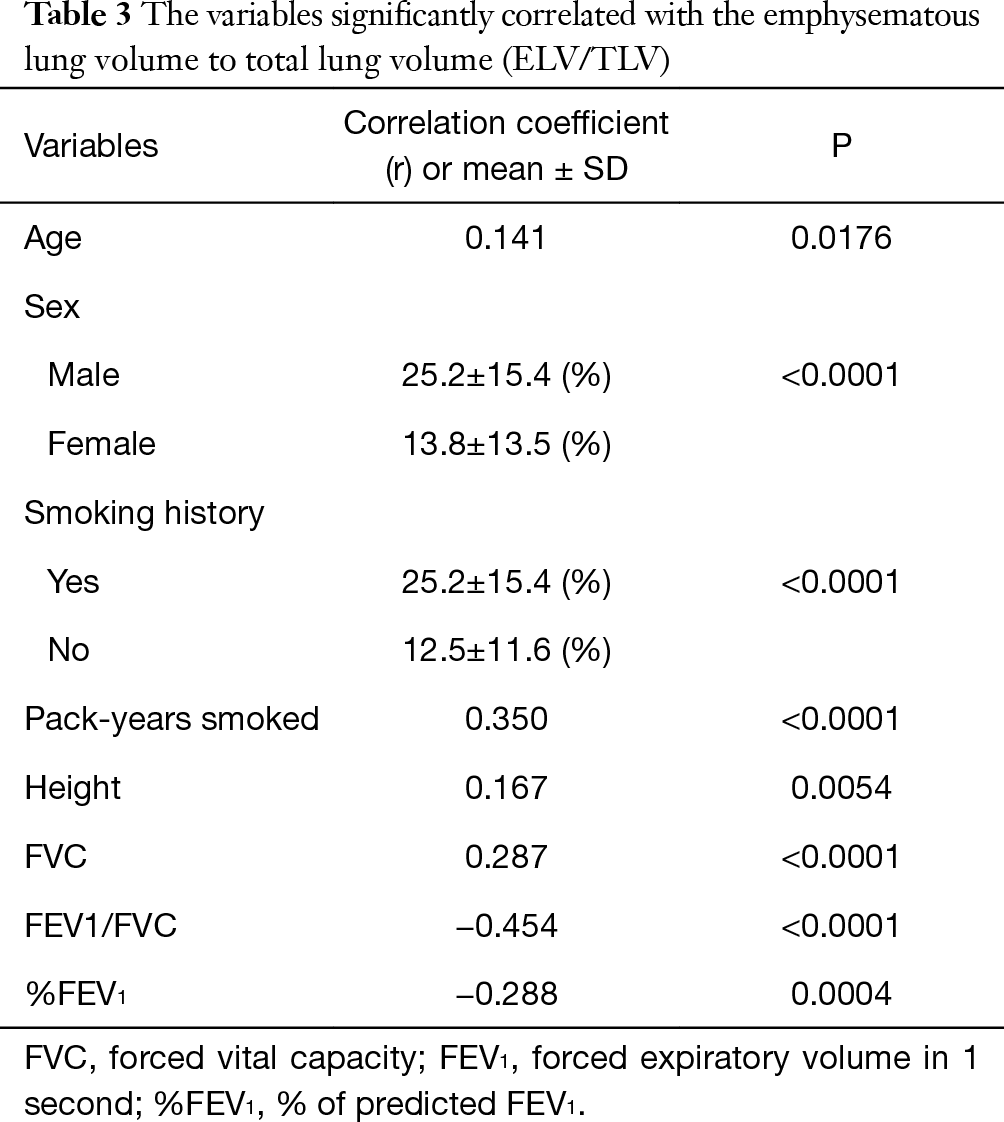 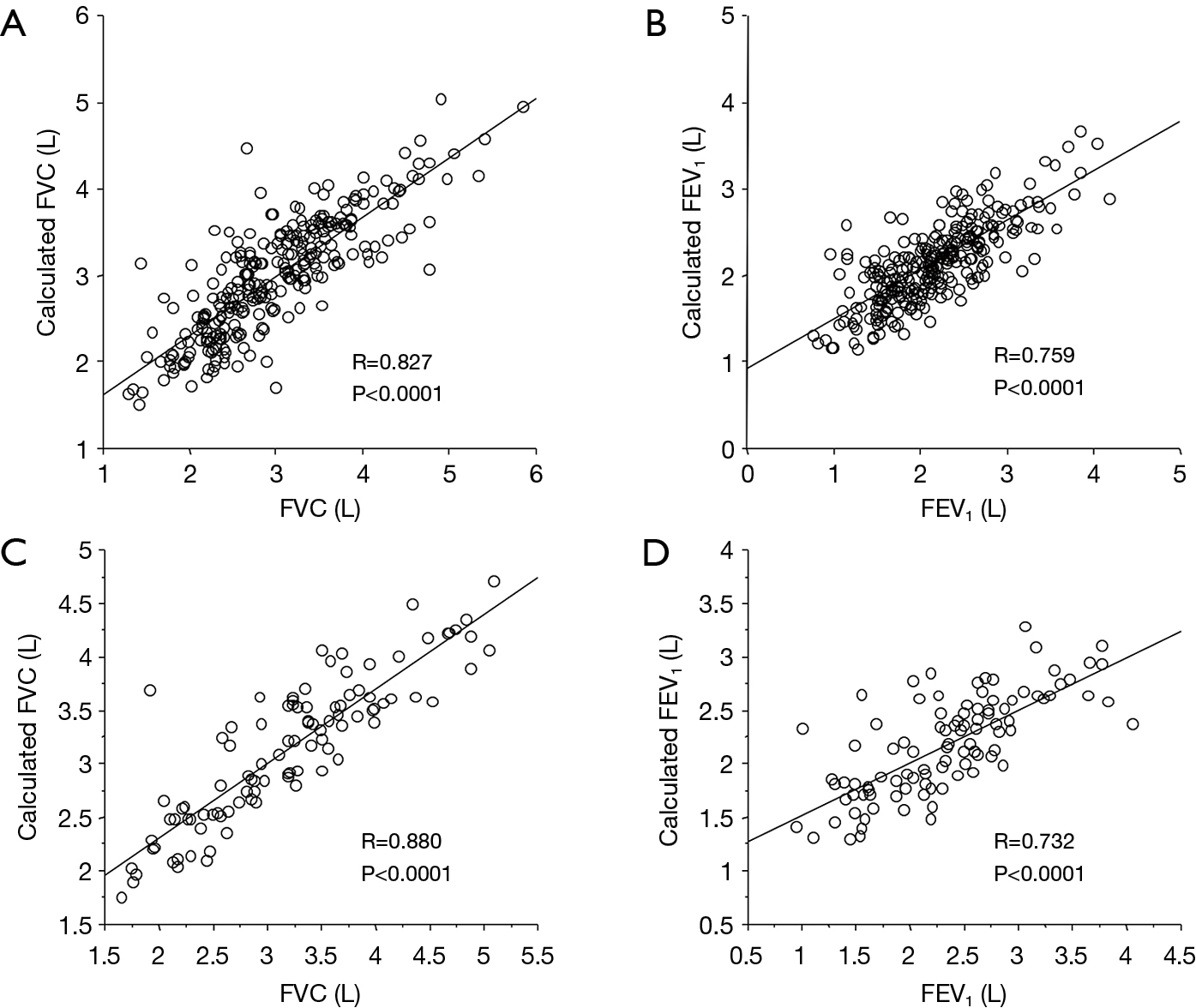 The results from the validation cohort 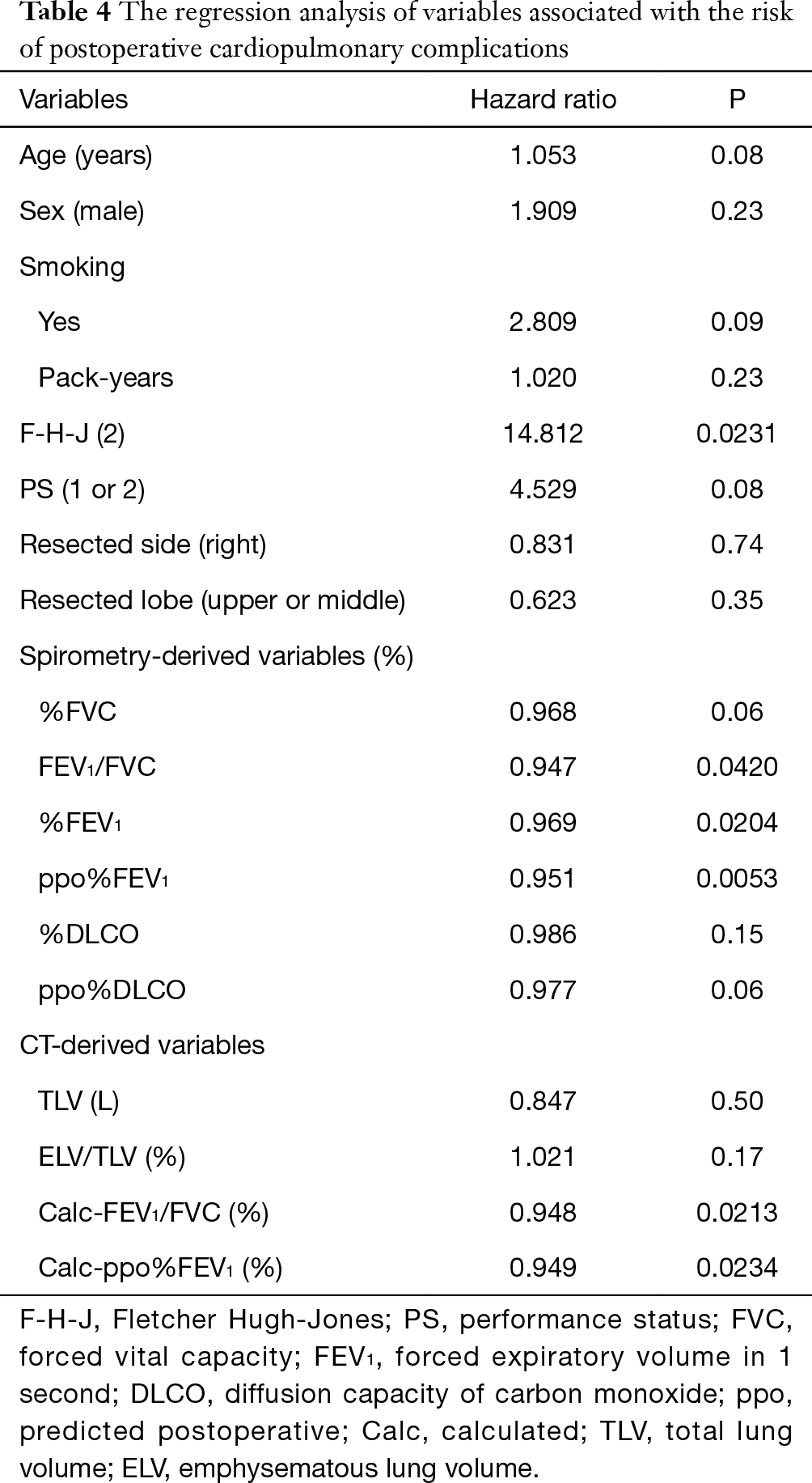 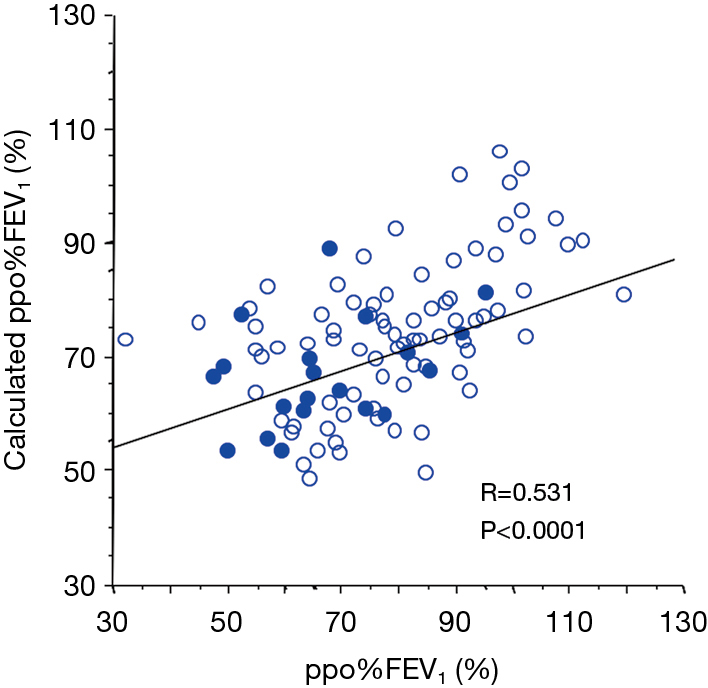 Because whole lung CT is performed in the routine workup before lung cancer surgery, it may be beneficial if the whole lung CT findings could contribute to the assessment of the preoperative pulmonary function. Quantitative CT enables us to assess the volume and density of the any specific part of the body. Thus, the volumes of the diseased lung and normal lung can be measured separately. However, CT is not used in the preoperative functional assessment of patients undergoing lung cancer surgery. In the current study, we developed regression equations in the development cohort to estimate FVC and FEV1 using parameters obtained by quantitative CT as well as the patient’s demographic variables. These regression equations were also useful in the validation cohort. In addition, ppo%FEV1 and FEV1/FVC, which were calculated based on the regression equation-derived FVC and FEV1, were significant predictors of postoperative cardiopulmonary complications. Our regression equation is especially useful for cases in which spirometry cannot be applied, such as cases involving patients with tracheostomy or patients who cannot follow instructions.

When we focused on TLV, TLV was found to be positively correlated with both FVC and FEV1, whereas TLV was negatively correlated with FEV1/FVC. This contradiction may occur due to the diversity of TLV: large lung (high TLV) can occur as the result of either hypertrophy of the functioning lung tissue or hyperinflation due to emphysema. According to a regression analysis of the patients in the development cohort, TLV was also positively correlated with ELV/TLV (R=0.355, P<0.0001), which represents the extent of emphysema. Thus, a comprehensive assessment using both TLV and ELV is indispensable in the estimation of the pulmonary function. Likewise, we believe that composite parameters, such as the calculated FEV1/FVC value or the calculated ppo%FEV1 value, should be used for preoperative risk assessment because TLV, ELV, and ELV/TLV were not predictive of postoperative cardiopulmonary complications.

TLV can be a surrogate measurement of TLC, which is determined by spirometry. According to the regression analysis in the validation cohort, TLV was significantly correlated with TLC (R=0.867, P<0.0001). Thus, the measurement of TLV on quantitative CT may be beneficial because the residual volume (TLC-VC) and residual volume index [(TLC-VC)/TLC] can be estimated without the measurement of TLC. We previously reported that the estimated residual volume, obtained using TLV and FVC, was predictive of the volume reduction effect after lobectomy for lung cancer: in other words, the residual pulmonary function increased after lobectomy for cancer, predominantly in patients with higher residual volume (TLV-FVC) (8). In addition, we reported that the estimated residual volume index was useful as a predictive marker of the response of patients with lung cancer and airflow obstruction to bronchodilators (9). Thus, we emphasize that the combined assessment of quantitative CT and spirometry may contribute to planning the therapeutic strategy and counseling patients with ontologically resectable lung cancer before surgery.

ELV/TLV is a parameter that is known to reflect the extent of pulmonary emphysema (10). According to our previous study, a higher ELV/TLV value was associated with the prolongation of the duration of chest tube drainage (11). Interestingly, according to our previous report, lung cancer recurrence was predominantly found in patients with higher ELV/TLV values, regardless of whether the resection of stage I disease was complete (12,13). The microenvironment of tumors arising in pulmonary emphysema could contribute to promoting tumor invasion and metastasis (14). We therefore recommend the routine measurement of ELV and TLV in patients undergoing major lung resection for cancer.

The quantitative CT-based estimation of the pulmonary function has an advantage in that it does not require intensive cooperation from the patient. Likewise, the forced oscillation technique can provide unique and clinically relevant information on the lung function, with little cooperation from the patient (15). A comprehensive assessment with these modalities can improve the accuracy of functional assessments, particularly in patients who cannot undergo spirometry.

In the present study, we estimated the predicted postoperative pulmonary function based on the number of segments to be resected and those to be remained, but not based on the pulmonary perfusion scan. Although the simple segment counting method certainly contribute to accurate prediction of the remaining lung function in the majority of patients undergoing lung cancer surgery, it can over- or underestimate the remaining pulmonary function in some patients with heterogeneous anatomical lung diseases, such as upper lobe predominant pulmonary emphysema. Therefore, we recommend the use of perfusion scan to estimate functional contribution of the lung to be resected in such patients with limited functional reserve.

The present study is associated with several limitations. Firstly, our patients had a relatively favorable pulmonary function. Thus, it remains unclear whether the regression equation for FVC and FEV1 can be applied in cases involving a marginal pulmonary function. Secondly, only a small number of postoperative cardiopulmonary complications occurred—in particular pneumonia and atelectasis. Thus, a larger scale study should be performed to clarify the usefulness of the regression equation in predicting postoperative cardiopulmonary complications.

In conclusion, whole-lung computed tomography can be used for the preoperative functional assessment in patients undergoing lobectomy for cancer. This method may be helpful in preoperative risk assessment, particularly in patients whose pulmonary function test results are invalid.

Ethical Statement: This study was approved by our institutional review board (H22482).