Impact of previous head and neck cancer on postoperative complications after surgical resection for lung cancer: a case-control study

Non-small cell lung cancer (NSCLC) is the leading cause of cancer-related death in Western countries. Lung resection (LR) is the main treatment for early NSCLC. Postoperative mortality after LR has decreased over the past decade due to improvements in surgical and anesthesia techniques (1,2), as well as better postoperative management (3-5). Known risk factors for postoperative complications after LR include anesthesia duration, preoperative lung function, older age, cardiovascular comorbidity, smoking status, preoperative chemotherapy, intraoperative bleeding, and type of surgery (6-13).

Head and neck cancer (HNC) is the most frequent primitive cancer associated with lung cancer (14,15). It may be synchronous or metachronous. The most frequent second malignant tumor among patients previously treated for HNC is lung cancer (14). Swallowing disorders are common after HNC treatment and are reported in up to 88% of patients depending on the tumor location, tumor size, and treatment (16,17). These problems mainly appear after radiation or partial laryngeal resection. Swallowing disorders may favor aspiration pneumonia (18,19). Few studies have evaluated the risk of postoperative complications after LR among patients who have previously been treated for HNC.

The objective of this retrospective, case-control study was to investigate the risk factors for postoperative complications in patients with previous HNC undergoing LR for lung cancer.

This retrospective, case-control study was carried out between January 2006 and May 2012 in a single academic thoracic surgery center at the Hôpital Européen Georges Pompidou, Paris, France.

Patients were selected from the hospital clinical database using three search criteria: (I) primary malignant lung tumor [ICD10 code (C34)]; (II) one of the following surgical procedures (pulmonary lobectomy, or pulmonary bilobectomy, or pneumonectomy, or wedge resection); and (III) HNC (ICD10 codes C00–C14, C31, C32). A specialist of HNC cancer (OL) checked that HNC had been diagnosed and treated before LR and reviewed each patient’s file. The head and neck surgeon clinically assessed swallowing function blinded for postoperative complications. Cases of synchronous cancer and HNC diagnosed after lung cancer surgery were excluded. A control group was selected of patients who fulfilled criteria 1 and 2 above, but did not have previous HNC.

The study population was divided into two groups. Group 1 (Gp1) consisted of control patients undergoing LR without previous HNC, and Group 2 (Gp2) consisted of patients undergoing LR after previous HNC. In Gp1, two patients were randomly selected for every patient in Gp2. Patients were matched 2/1 for the following variables: age at the time of thoracic surgery, gender, preoperative FEV1, smoking status, and year of surgery.

Antibiotic prophylaxis was administered based on national guidelines. Pain was managed with systemic opioids released by a patient-controlled administration system. Epidural analgesia or intercostal blocks were used at the discretion of the anesthesiology team. Physiotherapy was started at least twice-daily commencing the day after surgery. All patients were maintained in a semi-recumbent position and were confined to a chair on the first day after surgery. Postoperative pain levels were recorded using a visual analogue scale. The chest tube was removed if there was no bubbling and fluid loss was <150 mL/day. A chest X-ray was performed and examined daily.

The following data on the previous HNC were collected from the patients’ medical records: date of diagnosis, histology, TNM stage, localization, surgical procedure, associated treatments (radiotherapy or chemotherapy), and presence of tracheostomy. For the lung cancer the following data were recorded: histology, TNM stage, preoperative treatments, type of LR (pneumonectomy, lobectomy or wedge resection), duration of surgery, resection side, transfusion, Mallampati score. The maximum pain level during the first 24 h post-surgery was recorded.

The primary endpoint was the occurrence of one of the following events during the first 30 days post LR: death, shock (use of a vasopressor agent), need for mechanical ventilation (invasive or non-invasive), or postoperative pneumonia (POP).

POP was diagnosed using the following criteria: (I) fever >38 °C, or hypothermia <36 °C; (II) new or change in pulmonary infiltrate on chest X-ray; and (III) one of the following additional criteria: purulent sputum or leukocytosis >109/L or <2.5×109/L. Two investigators (BP and GM) blinded to the presence or absence of previous HNC assessed all diagnoses of POP to avoid any potential bias.

Variables yielding P values <0.1 in univariate analysis were included in a forward multivariate logistic regression analysis taking collinearity into account, to identify the factors that were predictive for postoperative outcome/event. Likelihood ratio statistics were used as a criterion for selection in a backward stepwise procedure. All tests were two-tailed and P<0.05 was considered statistically significant.

From January 2006 to May 2012, 1,151 patients underwent LR for lung cancer. Among these patients, 75 were identified as having previous HNC. Sixteen patients were excluded after a review of their files because two patients had lung cancer prior to HNC, two had synchronous HNC and lung cancer, and 12 had no HNC. The remaining 59 patients defined the exposed group and were included in Gp2 (Figure 1). 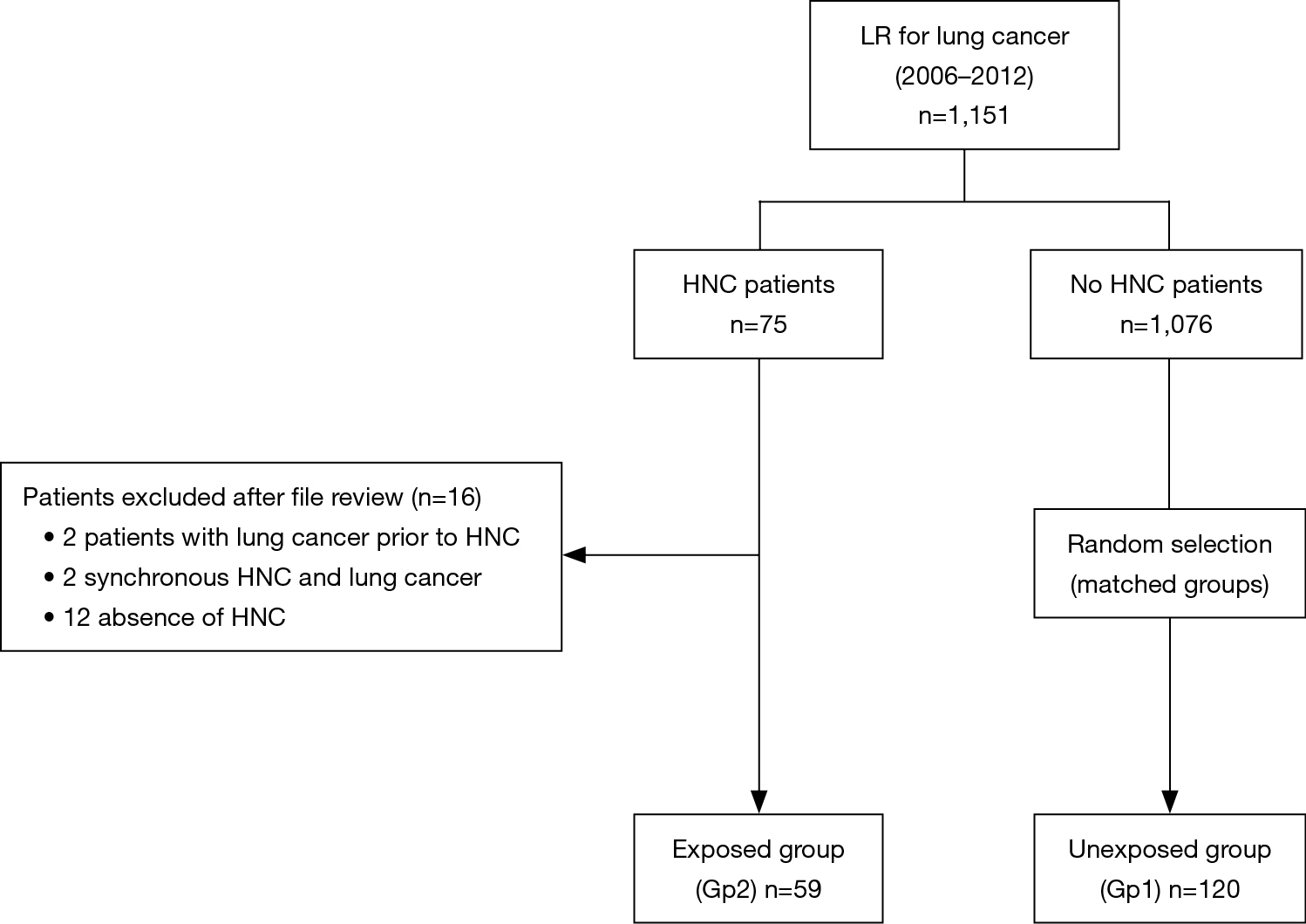 A total of 1,076 patients without previous HNC underwent LR for lung cancer and 120 of these were matched and comprised the unexposed group (Gp1) (Figure 1).

This study was conducted in accordance with the amended Declaration of Helsinki. Local institutional review board (N°3001 on the 10th May, 2011) and Commission Nationale Informatique et Liberté (CNIL) (N°1922081; 02/02/2016) approved the protocol. 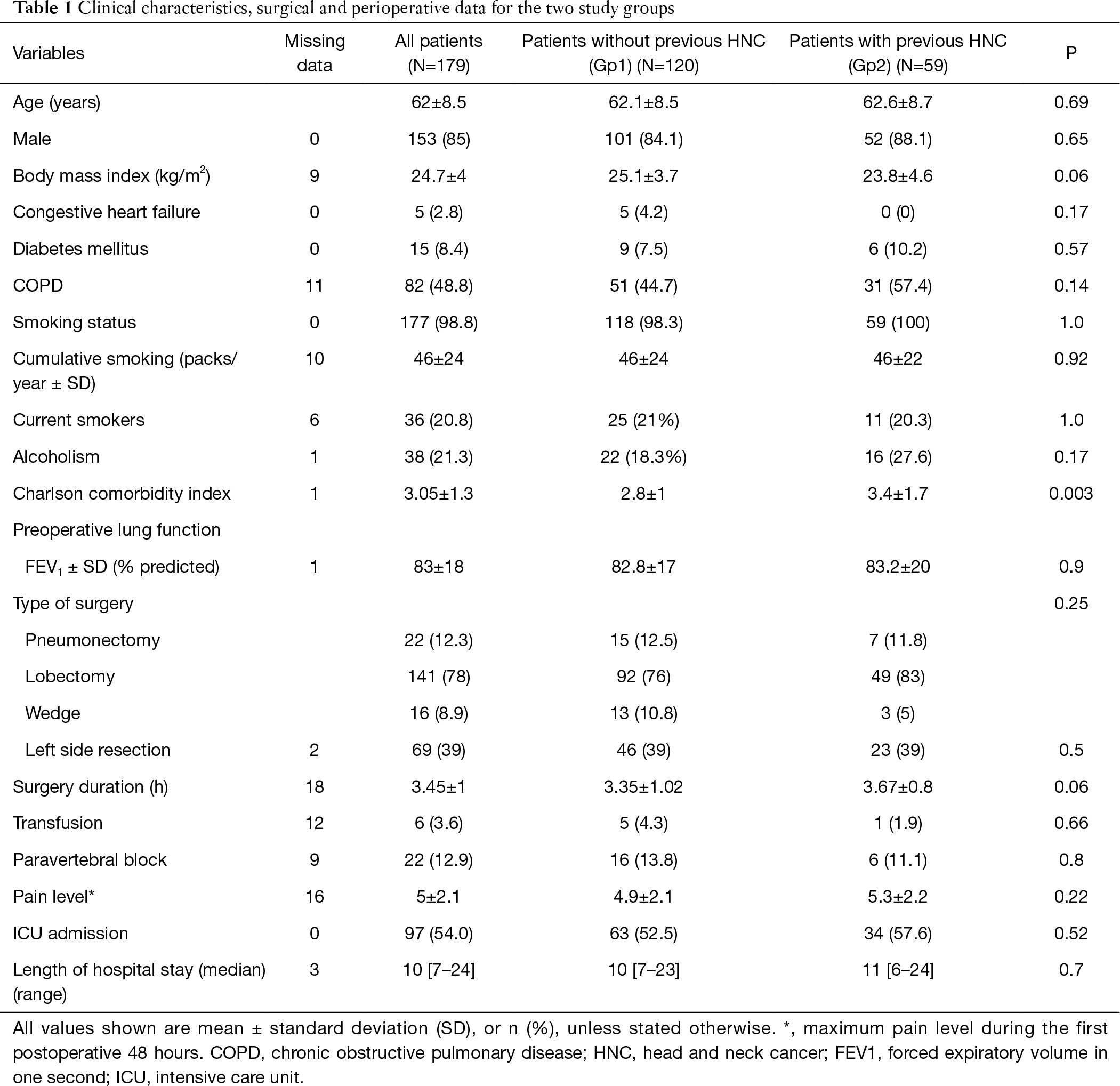 In Gp2, the median time between HNC treatment and lung cancer surgery was 80 months. Laryngeal cancer was the most frequent localization of HNC (n=24, 40.6%). Most patients underwent surgical treatment (n=31, 62%) and 27 (50.0%) received chemotherapy and/or radiotherapy. Among these 59 patients, 41 were evaluated for swallowing disorders before LR and 6 (14%) had a major swallowing disorder (Table S1).

In the group of patients with HNC, 7 were treated by total laryngectomy, 1 of whom experienced a postoperative complication. Eleven patients were treated by supraglottic partial laryngectomy. Among them, a postoperative complication occurred in 7 patients; a tracheostomy was performed during thoracic surgery (i.e., “prophylactic”) in only one patient (Table 4). Six patients were classified as high risk for swallowing disorders: four of these experienced a serious postoperative event (Table S1). 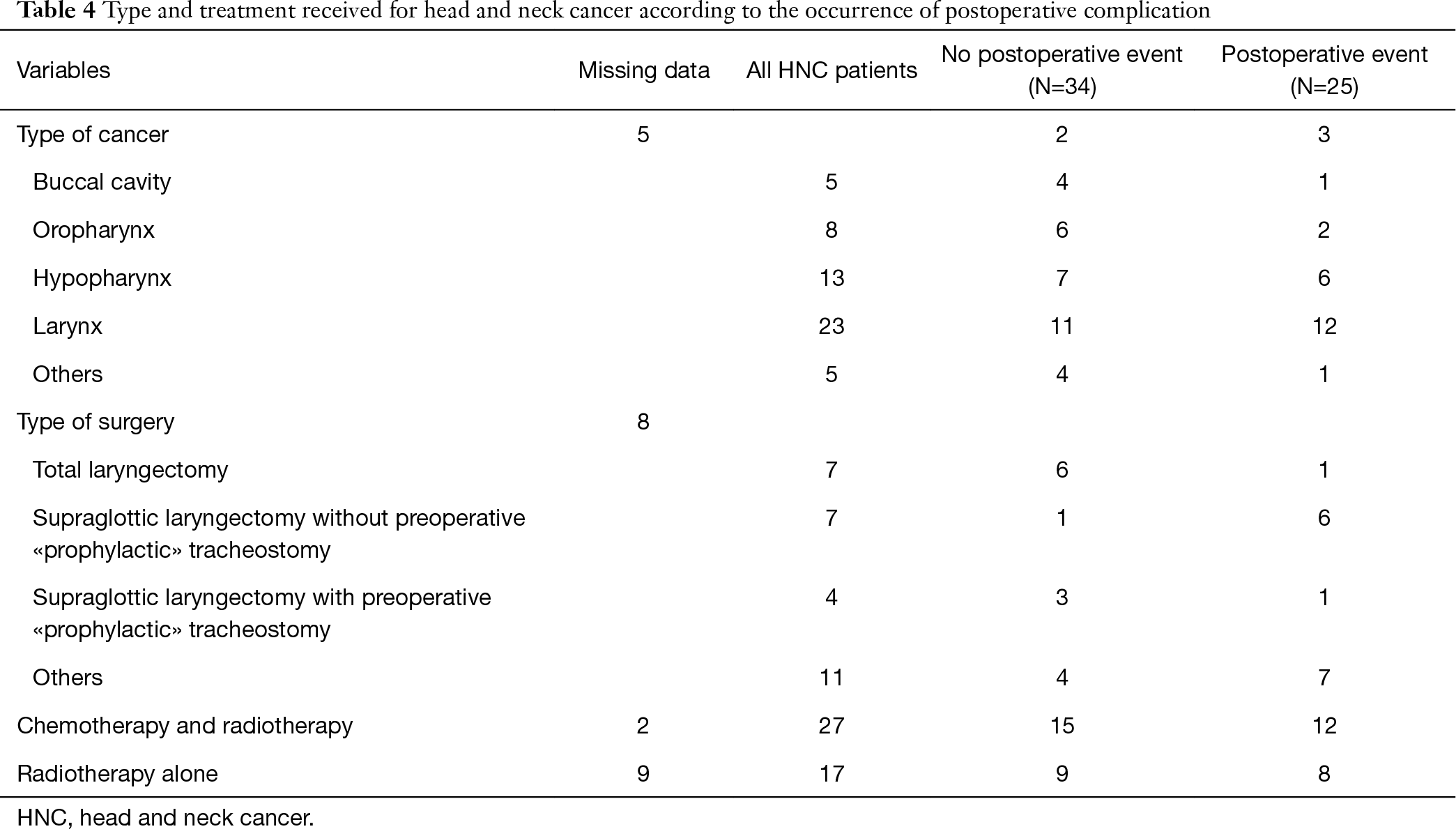 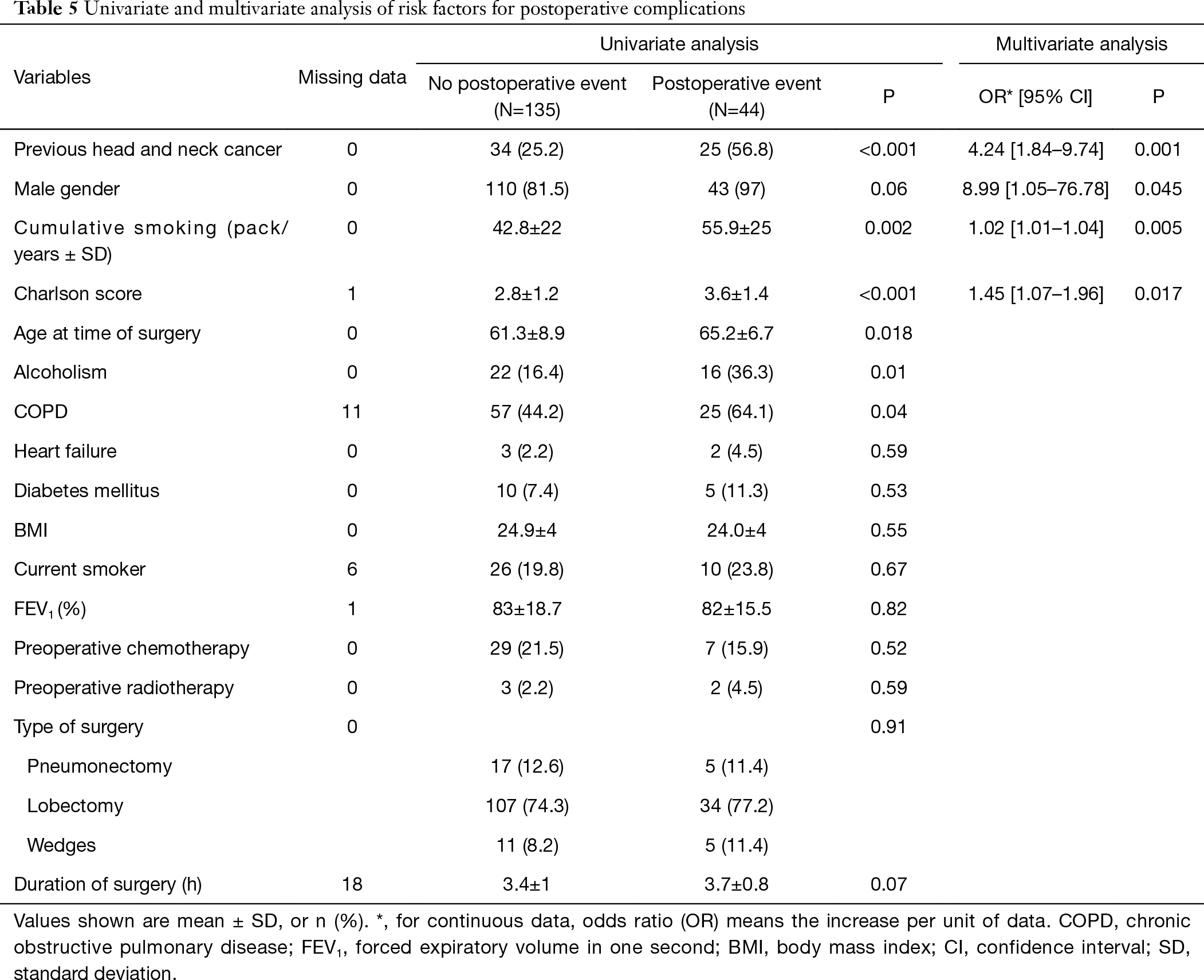 The characteristics of our study population are consistent with previous LR cohorts (5). Patients with a high Charlson comorbidity index and cumulative smoking of over 40 packs/year usually present with cardiovascular comorbidities (5). The type of surgery was also similar to that reported in the literature although the incidence of pneumonectomy was higher than reported (20). The incidence of serious postoperative events was higher than that reported elsewhere. Nevertheless, postoperative mortality in our study remained within the usual range, from 1.3–5.2% (5,20). The higher complication rate including higher POP (21) could be explained by the selection of high-risk patients, mostly HNC patients, and the large proportion of patients undergoing pneumonectomy. The postoperative events in the HNC group were similar in type to those in Gp1.

Only a few studies have reported the outcome of patients with previous HNC who undergo LR. Massard et al. carried out an observational study of 114 patients with previous HNC undergoing LR (26). They reported a mortality rate of 3.5% and a POP rate of 17.6%. More recently, Herrera et al. reported a larger exposed/unexposed study and found an increase in POP, mainly after partial laryngeal surgery (27).

Swallowing disorders seem to be the main problem in HNC patients. Four out of six of our patients who were evaluated as high-risk for swallowing before LR developed POP (Table S1). All had previously been treated by partial laryngeal resection. Furthermore, although POP was not documented systematically by microbiological sampling, the documented bacteria in HNC patients with POP were all enterobacteria species, supporting the hypothesis that an aspiration mechanism is involved. It has recently been suggested that up to 25% of patients will develop aspiration pneumonia within 5 years after receiving chemo-radiotherapy for HNC (28). These data suggest that a systematic evaluation of preoperative swallowing disorders could help in identifying high-risk patients for postoperative complications in whom preventive strategies could be proposed.

Even if our results and those of Herrera et al. (27) support the hypothesis that swallowing disorders may increase the risk of POP in the early postoperative phase, the benefit of preventive tracheostomy in HNC patients has not been validated. However, temporary “prophylactic” tracheostomy during LR surgery could facilitate the clearance and aspiration of bronchial secretions and help to introduce respiratory assistance if necessary. Although many centers have adopted this strategy for some patients, there is no consensus regarding the treatment of these high-risk patients. As we noted, among the 11 HNC patients treated by supraglottic partial laryngectomy, seven experienced at least one serious postoperative complication. However, a prophylactic tracheostomy was performed during LR in four of these patients and only one had a serious postoperative complication. Moreover, patients treated by total laryngectomy cannot have swallowing disorders. Only 1 out of 7 patients treated by total laryngectomy had a postoperative complication. After exclusion of these 7 patients, the results of the multivariate analysis remained unchanged.

The main strength of our work is its exposed/non-exposed study design with groups matched for most of the usual risk factors for postoperative complications. However, our study has several limitations. It was a monocenter analysis with only a small number of patients with previous HNC. Because of its retrospective design, some data were also missing, especially data regarding the preoperative swallowing evaluation. Finally, not all POPs were documented by a positive bacterial culture from a respiratory sample. However, we used a well-accepted definition of nosocomial pneumonia and all events were independently assessed by two investigators blinded to the presence or absence of previous HNC.

The present study confirms that previous HNC is a major risk factor for serious postoperative complications in patients undergoing LR for lung cancer. Male gender, high Charlson comorbidity index, and smoking status were independently associated with the occurrence of postoperative complications. This increased risk of complications may be related to swallowing disorders, a frequent complication after HNC surgery. Our data support the systematic preoperative clinical assessment of swallowing disorders to identify patients at risk. The risk:benefit ratio of a temporary “prophylactic” tracheostomy should be evaluated.

Ethical Statement: This study was conducted in accordance with the amended Declaration of Helsinki. Local institutional review board (N°3001 on the 10th May, 2011) and Commission Nationale Informatique et Liberté (CNIL) (N°1922081; 02/02/2016) approved the protocol.