Mediastinal lymph node dissection (MLND) through video-assisted thoracoscopic surgery (VATS) has been an aporia. It was one of the prime reasons that the effectiveness of VATS lung cancer surgery was queried, and no standardized procedure had been established. Several techniques of VATS MLND have been described concerning application of different instruments [cautery hook (CH), harmonic scalpel, Ultracision] (1-3). Cutting or crushing the target mediastinal lymph nodes (LNs) following the traditional grasping strategies was hard to be avoided. We developed a novel approach of non-grasping en bloc MLND (4), and this video depicted the right side VATS non-grasping en bloc MLND in detail.

General anesthesia is administered through double-lumen endotracheal intubation, and patients are placed in the appropriate lateral decubitus position. A three incisions approach was used. Observation incision is made in the 7th intercostal space (ICS) at the midaxillary line while a 3 cm main utility incision is made at the anterior axillary line in the 3rd ICS for the upper and middle lobe and in the 4th ICS for the lower lobe, and a 2 cm assistant utility incision is made in the 9th ICS posterior to the posterior axillary line. The surgeon and camera man stand in ventral side of the patient. Anatomical lobectomy is performed following the “single-direction” strategy as in our previous description (5). Lymphadenectomy is performed after lobectomy. Dissection of station 10, 11, and 12 is performed along with the lobectomy. The intralobar LNs (stations 13 and 14) were removed along with the resected lobe and dissected later by the surgeon himself. As recommended, we routinely dissect stations 2, 4, 7, 8, and 9 for right-side lobectomy. We use three main instruments to complete the MLND—endoscopic suction (ES), CH or ultrasonic scalpel (US). ES can be used as grasper and clean the surgical site. CH plays roles as dissector and sketches the “en bloc” boundary. US performs reliable and durable ligation of small lymphatic or blood vessels. During a right-side procedure the ES is inserted through the assistant utility incision while the CH or US was inserted through the main utility incision. Besides dissecting the target LNs, we dissect the total fat pad located among the anatomic landmarks of each station as a whole. In this video we focus on describing the right side MLND dealing with stations 2, 4 and 7 (Figure 1). 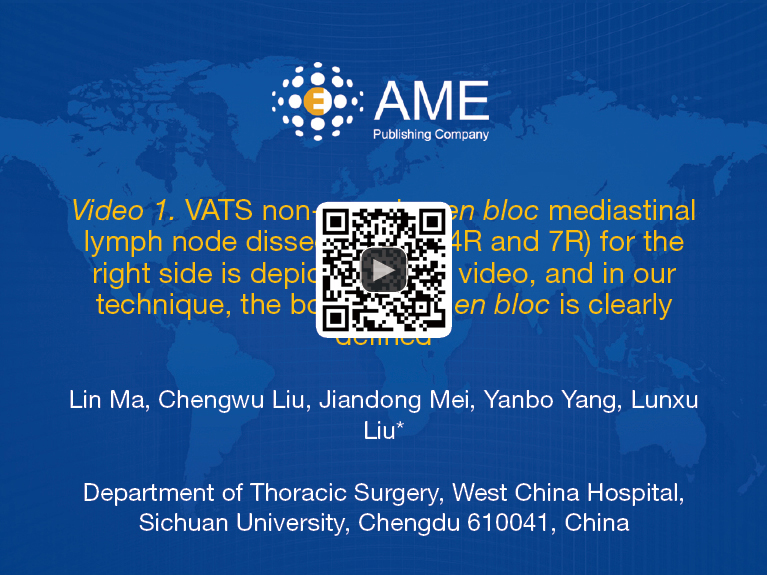 Figure 1 VATS non-grasping en bloc mediastinal lymph node dissection (2R, 4R and 7R) for the right side is depicted in this video, and in our technique, the boundary of en bloc is clearly defined (6). VATS, video-assisted thoracoscopic surgery. Available online: http://www.asvide.com/article/view/26158

The remnant lung is retracted toward the right posterior costophrenic corner using the thoracoscopic ring clamp from the assistant port to expose the anterosuperior mediastinum. First, we open the mediastinal pleura under the arch of azygos vein (AAV) by CH, and expose the regional landmarks: the AAV, superior vena cava (SVC), lower trachea, and proximal part of pulmonary artery (PA). With the help of ES, lower portion of the block right beneath AAV is hollowed out with US. Then, the mediastinal pleura above AAV is opened by CH along the shape of left-right flipped “L”. After that, the lower end of the block beneath the AAV will be flipped over the AAV and lifted by the ES. Next, the block is slightly pushed aside or lifted by the ES and dissected off the posterior border of the SVC, the lateral border of the ascending aorta (AA), and the anterior border of the trachea sequentially from the cephalic border of the azygos vein to the caudal border of the innominate artery. Finally, the block will be dissected longitudinally and anterior to the vagus nerve en bloc.

The remnant lung was retracted toward the cardiophrenic angle using the thoracoscopic ring clamp from the assistant port to expose subcarinal zone which can extend the width between the right and left main bronchus (LMB). The mediastinal pleura is opened by CH posterior to the right main bronchus (RMB) and anterior to the esophagus, from the inferior pulmonary vein up to the AAV. The subcarinal block is first dissected off the esophagus until the carina and the LMB are identified. During this process, the esophagus is pushed aside with the ES, and the block is separated from the esophagus mainly by CH. Small bronchial arteries originating from the aorta and entering into the block can be ligated with hemoclips. Lifted by the ES with certain tension, the block is dissected off the pericardium. Then along the posterointernal border of the RMB, the block is separated to the level of carina by the US, and subcarinal bronchial arteries are ligated by the US carefully. At last the block can be dissected off the carina and retrieved en bloc from the LMB.

Following the standardized steps and skeletonizing the surrounding landmarks are the key point to complete en bloc MLND safely. During the station 2+4 block dissection, we hollow out the LNs block in the zone under the AAV first, then flip over it and separate the LNs and fat tissue from the SVC and AA. Following these steps, 2+4 block embedded in the important structures become a form of ingot which is facilitated to dissect. “Hollow out” and “flip over” the block are the important maneuver of en bloc dissection. Separating the structures anterior and posterior to the block of station 7 makes the block shallower and two-side freed under the carina, which make it easier to be shoveled off from RMB, LMB. In our experience, diversified use of the ES saves trouble of alternating instruments and provides more convenience for the surgeon. Using this so called “multifunctional retractor”—ES, you will get an adequate regional exposure and clean surgical field without bleeding under thoracoscopy. The non-grasping strategy avoids smashing LNs which may cause dissemination of tumor cells to the pleural or mediastinal space if the node is involved. En bloc dissection of the bounded fat block makes sure that there is no LN missed. Reichert et al. reported a nodal stage in 5.2% of cN0 patients migrated to postoperative pN2 (8). While in our data, the incidence of upstaging from cN0 to pN2 was 12.2%. We believe that our persistence in en bloc dissection might have contributed to find more unexpected N2 disease (4). Finally, thermal injury is the potential risk to using energy device in en bloc dissection, but appropriate method of application will have the largest decline in injury.