Lung transplantation is the ultimate effective treatment for benign end-stage lung disease. Dr. Hardy performed the first lung transplant in a human in 1963 (1), and the patient survived 18 days after operation. Approximately 40 lung transplants were performed during the following two decades, but the postoperative survival rate was extremely low. Most patients died of immune rejection, infection, or anastomotic complications. With the clinical application of immunosuppressants such as cyclosporine, the Toronto Lung Transplant Group first successfully performed single-lung transplantation in 1983 (2) and double-lung transplantation in 1986 (3). Since then, lung transplantation has been rapidly progressing. According to the International Society for Heart and Lung Transplantation (ISHLT) registry, 3,893 lung transplants were performed and registered worldwide in 2013, indicating considerable progress in lung transplantation. Currently, donor shortage remains a major limitation of lung transplantation. The utilization rate of donor lungs is significantly lower than that of other solid organs. Studies (4) have shown that only 15–20% of donor lungs are effectively utilized, while the rate is 30% for donor hearts. The main reasons for this low rate are related to complications such as pulmonary contusion, aspiration, mechanical ventilation pressure injury, ventilator-associated pneumonia, and neurogenic pulmonary edema. However, according to the reports, approximately 40% of discarded donor lungs are still usable (5,6). In recent years, the number of patients waiting for a lung transplant has been increasing annually, while the death rate among those on the waiting list has also increased because of the donor shortage. Several measures that expand the availability of donor lungs have been used in clinical practice, such as the use of marginal donors, donors of cardiac death, lobar donors for recipients with a small thoracic cavity, and extracorporeal membrane oxygenation (ECMO) support for donor lungs with compromised quality. Ex vivo lung perfusion (EVLP) is a technique used to evaluate and screen compromised donor lungs with potential for recovery. This technique has been already used in lung transplantation centers in North America and Europe.

Brief history of the development of EVLP

Carrel and Lindbergh first proposed the idea of ex vivo organ perfusion in 1935 (7). They removed the thyroids of cats and rabbits for ex vivo perfusion for approximately one week. EVLP was initially proposed by Hardesty (8), but the idea was abandoned because of unsatisfactory results. In the 1990s, Steen et al. (9,10) evaluated lung functions with EVLP and then later reported the preliminary results of a series of pivotal cases of EVLP; in 2000, EVLP was used to evaluate a lung from a non-heart-beating donor before lung transplantation; in 2005, the team performed EVLP to re-evaluate a lung considered ineligible during initial evaluation, and the lung was finally transplanted successfully. These results provided initial experiences for subsequent clinical application of EVLP. In 2006, Wierup et al. (11) built upon Steen’s experience and conducted a clinical study. The results showed that in six cases, donor lungs were considered ineligible during initial evaluation, re-evaluated and deemed eligible with EVLP, and successfully transplanted. In 2009, the Toronto Lung Transplant Group (12) proposed the Toronto EVLP protocol; in 2011 (13), they published an article in the New England Journal of Medicine reporting that in 20 cases, “ineligible” donor lungs were re-evaluated with EVLP and then successfully transplanted. This study showed that using EVLP is feasible in clinical practice.

Mechanism of action and indications for EVLP

EVLP can restore the circulation and ventilation of the ex vivo lung. At an ambient temperature of 37 ℃, a membrane oxygenator is used to simulate oxygen consumption in the body via deoxygenation and maintain the physiological state of lungs with specific perfusate and ventilation. The Steen solution is currently the only Food and Drug Administration (FDA)-approved EVLP perfusate for clinical use. The ventilation gas in the lung membrane consists of N2 (86%), CO2 (8%), and O2 (6%). The hypoxic gas mixture removes the oxygen in the circuit to simulate oxygen consumption in the body. The EVLP system includes a ventilator, an endotracheal tube, perfusate and a fluid circuit, a reservoir, an oxygenator, a pump, and a thermostat.

EVLP is currently used mainly to evaluate certain high-risk donor lungs. It is mainly indicated for (13,14): (I) an oxygenation index <300 mmHg; (II) pulmonary edema as indicated by the last chest X-ray; (III) collapse or poor expansion of a donor lung during harvest; (IV) blood transfusion >10 U; and (V) lungs from donors with cardiac death. EVLP is not suitable in cases of apparent pneumonia, severe mechanical lung injury (including multiple lobar injury), or significant aspiration of gastric contents.

After EVLP, a donor lung is considered eligible for transplant if (13,14) the oxygenation index reaches 400 mmHg after 4–6 hours of EVLP; chest X-ray findings are stable or improved; and pulmonary artery pressure, airway pressure, and lung compliance are stable or improved. A reconditioned donor lung is considered ineligible for transplant if the oxygenation index is <400 mmHg; pulmonary arterial pressure, airway pressure, or lung compliance worsens by ≥15% from baseline; and chest X-ray shows worsening signs.

The primary types of EVLP

Currently, three EVLP systems (Table 1) are commercially available for clinical use: the Toronto system, the Lund system, and the Organ Care System (OCS). The Toronto system is the most widely used system. The Lund system is an extension of the original EVLP protocol. The OCS is currently the only portable EVLP system. For both the Toronto and Lund systems, the donor lung is cryopreserved after harvest and during transportation and is connected to the EVLP device for perfusion at ambient temperature after it is delivered to the recipient’s hospital. The transportation time is counted towards the cold ischemia time. On the other hand, the OCS allows the donor lung to be immediately connected to the EVLP system for perfusion at ambient temperature after cold perfusion and harvest, thereby reducing the cold ischemia time. 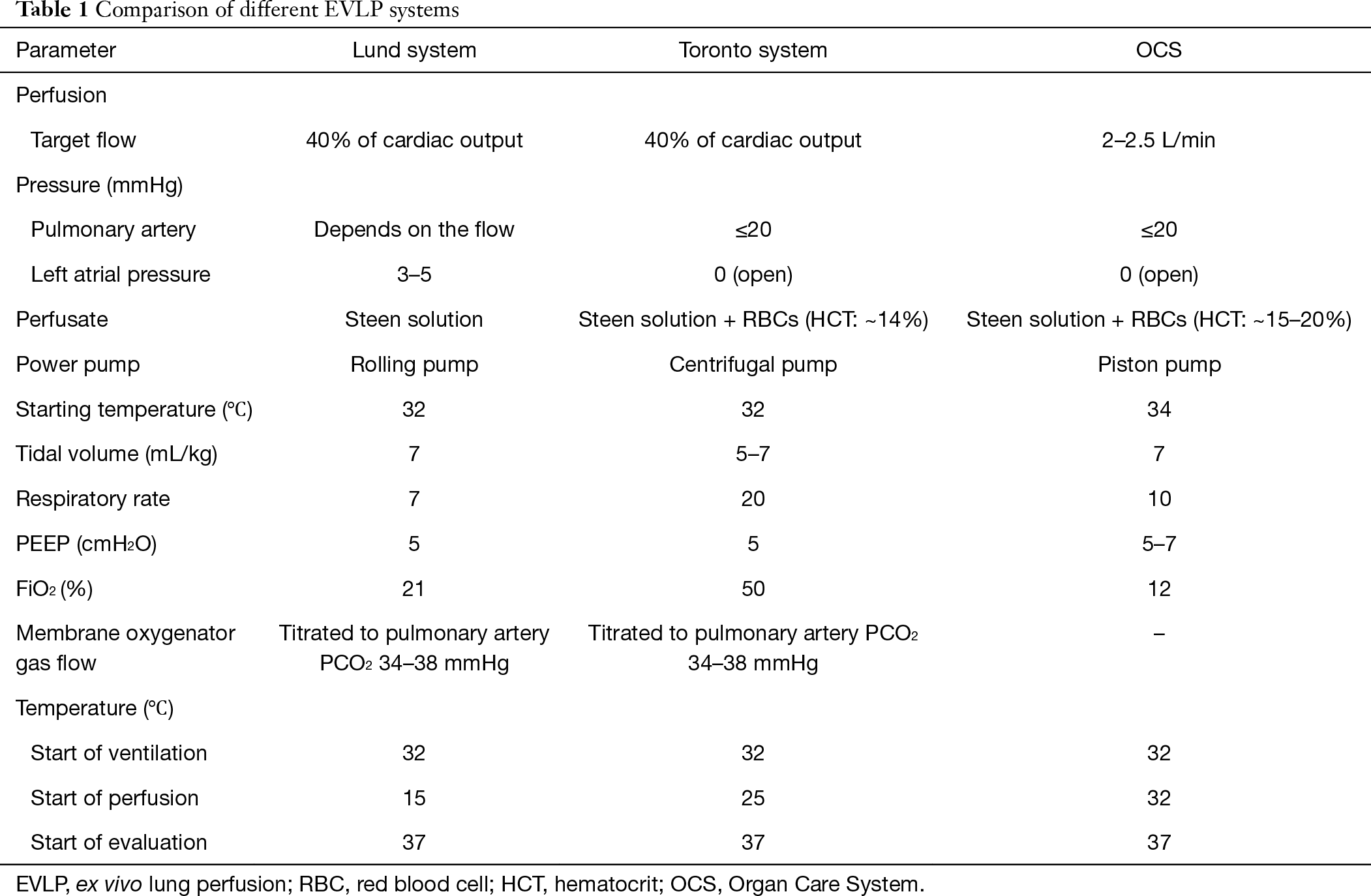 During EVLP and evaluation, the graft can be examined in detail by direct touch, bronchoscopy, and imaging studies to rule out tumors, pulmonary contusion, pulmonary edema, infection, embolism, and interstitial lung disease. Pulmonary function evaluation includes blood gas analysis, hemodynamics, and mechanical ventilation parameters over several hours. During this time, lung tissue specimens and bronchoalveolar lavage fluid can be tested for microbial, molecular, and histomorphological markers, which help determine the quality of a donor lung.

Advantages: (I) larger size and weight. Large animals such as pigs are advantageous for EVLP studies as experimental parameters, after modification, can be directly applied to human subjects. The size and weight of pigs are similar to those of humans; therefore, the pig is an effective animal model for human conditions. For example, proper tidal volume, positive end-expiratory pressure (PEEP), and perfusion time settings can be used as a basis for clinical trials. In addition, device design and perfusate volume in porcine studies can be used directly in clinical trials, which is not feasible with small animals; (II) similar immune system and physiological environment. The genetic sequence and physiological environment of pigs are closer to those of humans and can better simulate human conditions compared to rats and mice; therefore, the porcine model is an ideal animal model for pre-clinical studies.

Disadvantages: large animals have certain disadvantages, such as being expensive, time-consuming, and labor-intensive, especially with regard to experimental equipment, the perfusate volume required, and labor costs associated with surgical procedures, anesthesia, and experimental management, thus complicating repeat experiments with large animals for validation.

Advantages: EVLP studies have been conducted in small animals such as rats, mice, guinea pigs, and rabbits. The experiments are less expensive than those with large animals, which is the greatest advantage of using small animals. In addition, the experiment can be performed by one person, saving time and labor and facilitating repeat experiments as needed for validation. Of the four animals mentioned above, mice are the smallest and most difficult to operate on, while the other three small animals can be operated on without a microscope. Currently, the success rate of lung transplantation in rats is approximately 95%. Fewer studies have been conducted in rabbits and guinea pigs, and most studies involve the ischemia-reperfusion model. Mice are the most difficult to operate on, with a high incidence of accidental injury, but they are a more valuable research tool than rats because of the availability of a large number of protein antibodies and gene probes.

Disadvantages: small animals have certain disadvantages. Rats and mice have a shorter perfusion time. Studies have shown that the perfusion time is 15 minutes to several hours in rats depending on many factors. Studies of lung injury models show that the degree of lung injury after ventilation/perfusion for 15 minutes in rats is similar to that after 4–24 hours in pigs/humans. Moreover, rodent studies have shown a high incidence of pulmonary atelectasis, which, along with airway fluid after lung recruitment, can damage the alveolar epithelium (18,19). In studies with large animals, the cause of atelectasis can be identified, and airway fluid can be removed via bronchoscopy.

EVLP is an emerging, revolutionary technology that plays a very important role in donor lung recovery and evaluation. It also helps expand the availability of donor lungs and alleviates the shortage of lung transplant donors.