A solitary fibrous tumor of the pleura for which the tumor doubling time could be calculated by computed tomography: a case report

The patient was a 67-year-old asymptomatic woman in whom a thoracic tumor had been pointed out in a medical examination 3 years previously. CT performed at that time revealed a mass in the right hemi-thorax measuring 39.0×20.6×32.0 mm at that point; the tumor was thought to have arisen from the parietal pleura (Figure 1A). The doctor in charge at that time recommended further examination and medical treatment; however, the patient was not treated. Three years later, an abnormal chest shadow was again pointed out in an examination, and CT imaging revealed that the tumor had increased to 110.0×85.0×60.0 mm in size (Figure 1B). The interval between the two examinations was 1,130 days. The tumor doubling time of 241 days was relatively slow. The tumor doubling time was calculated based on CT measurements using the Schwarz method (Table 1) (2). Based on the imaging findings, a solitary fibrous tumor was suspected and surgery was performed with the aim of diagnosing and treating the tumor. The operative findings revealed that the tumor had arisen from the parietal pleura and adhered to the right upper lung lobe. We performed resection of the second and third ribs, excision of the thoracic wall, partial resection of the right upper lobe and chest wall reconstruction. The tumor stem and the tumor were reliably excised and the margin was secured. A histopathological examination revealed that, macroscopically, the tumor was solid, with a flat surface and lobular findings (Figure 2A). Microscopy revealed that the tumor was composed of spindle cells proliferating in a patternless arrangement with a collagenous background (Figure 2B). Immunohistochemistry demonstrated that the tumor cells were positive for CD34 (Figure 2C), bcl-2 (Figure 2D), which confirmed the diagnosis of SFTP. Three mitotic cells were observed per 10 high-power fields (HPFs). 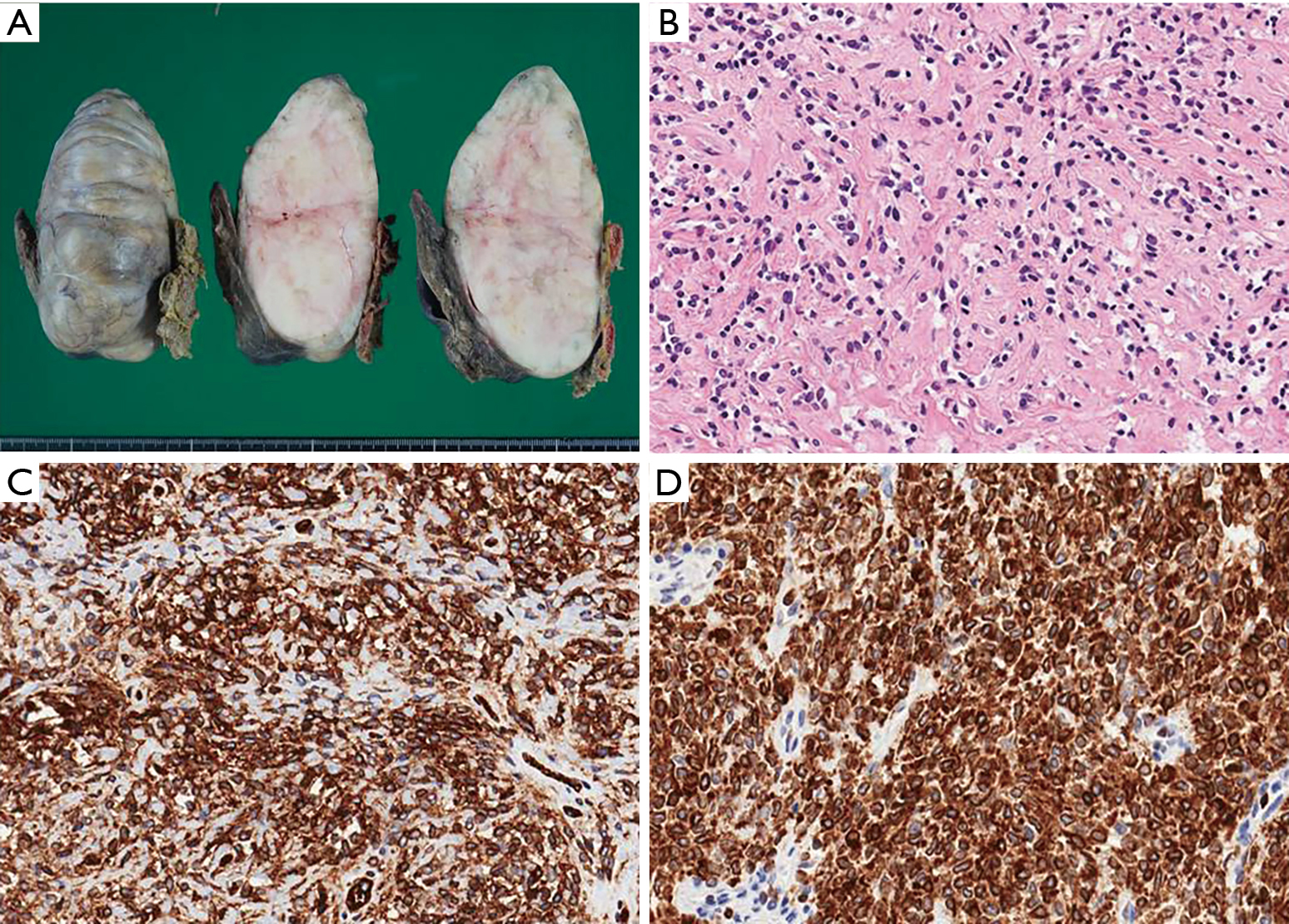 SFTP was first reported as a pleural lesion by Klemperer et al. (3). SFTP is a rare and often benign localized fibrous tumor that accounts for <5% of all primary pleural neoplasms (4). The incidence of this disease is reported to be 2.8 per 100,000 (5). According to large retrospective studies, the mean age at the diagnosis of SFTP is 58–66 years (6). Patients are often asymptomatic, and tumors are often pointed out based on abnormal shadows on chest X-rays taken for medical examinations or for examinations for other diseases (7). Patients with large tumors may exhibit symptoms such as cough, chest pain, and dyspnea (due to organ pressure). SFTP was initially termed localized mesothelioma, since the tumor was believed to originate from mesothelial cells. However, immunohistochemical evidence has emerged, indicating that these fibromas are derived from the mesenchyme, rather than the mesothelium (8). Staining for CD34, which was initially characterized as a hematopoietic progenitor cell antigen, is helpful for identifying SFTP and distinguishing SFTP from mesothelioma; staining for bcl-2 is useful for making the diagnosis (9). At present, there is no unified opinion regarding the grading of SFTP; however, (I) the histologic presence of >4 mitotic cell per 10 high power fields, (II) overlapping nuclei showing hyper-cellularity (III) nuclear atypia, (IV) bleeding and necrotic foci are regarded as indicators of malignancy (10). SFTP is generally a slow-growing neoplasm with a favorable prognosi; however, some cases have a malignant outcome.

SFTP with local or distant recurrence is often larger than >10 cm on presentation (11). It has been reported that histological malignancy alone is not a prognostic factor and that a non-pedunculated tumor is often malignant than a pedunculated tumor (12). Two-thirds of SFTPs arise from the visceral pleura, and one-third arise from the parietal pleura. There is no difference in the rates of left and right thorax occurrence. With regard to the morphologic features, two-thirds of SFTP are pedunculated, and one-third are broad-based (13). It is relatively difficult to diagnose SFTP preoperatively. With regard to diagnostic imaging, the differential diagnoses include lung cancer, thymoma, neurogenic tumor, esophageal tumor, and chronic empyema. The examination of resected specimens is considered to be desirable as few cases are diagnosed from needle biopsy specimens, and because the possibility of dissemination by needle biopsy cannot be denied (14). Surgical resection is first choice for treatment of SFT, with complete resection of the tumor being associated with a good prognosis. The rate of recurrence after the surgical resection is 7–24% (14–58% for malignant tumors, 2–4% for benign tumors) with the time to recurrence ranging from 6 months to 30 years (15). From the viewpoint of postoperative survival, benign or malignant SFTP without invasion may be considered to have a good prognosis; however, malignancy with invasion is associated with a poor prognosis (15,16). Ensuring the surgical margin is considered to be vital and it is important for patients to be followed up carefully after surgery. In the present case, the tumor went untreated for 3 years based on the will of the patient which allowed the tumor doubling time to be measured. In this case, the tumor doubling time was determined to be 241 days. This was relatively slow in comparison to the reported tumor doubling time of lung cancer, (30 days for small cell lung cancer, 100 days for squamous cell lung cancer and large cell lung cancer, and 180 days for adenocarcinoma of the lung) (14).

Consent Informed: There is no written consent, however, we got verbal consent from the patient.