A 55-year-old man suffering from chest trauma with multiple rib fractures was admitted to the intensive care unit. After admission, the patient became agitated due to pain and hypoxia. As his pulse oxygen saturation was less than 85%, endotracheal intubation was immediately performed and mechanical ventilation was initiated in pressure support ventilation using an AVEA ventilator (CareFusion Co., San Diego, CA, USA). The patient exhibited signs of paradoxical respiration and tachypnea. Midazolam and sufentanil were continuously infused to titrate the sedation depth on the Richmond Agitation Sedation Scale to −4 to −5, that is, no response to voice but any movement to physical stimulation (9). Due to the chest trauma with multiple rib fractures and sign of paradoxical respiration of the patients, the ventilator mode was switched to pressure assist-control ventilation set at an inspiratory pressure of 15 cmH2O, a respiratory rate of 20 breaths/min, an inspiratory time of 1 s, a positive end-expiratory pressure of 8 cmH2O, and a fraction of inspired oxygen of 0.4. A more sensitive flow trigger (sensitivity of 1 L/min with base flow of 2 L/min) was set to avoid deeper inspiration efforts. The ventilator monitor showed a respiratory rate of 20 breaths/min and an expiratory tidal volume of 430 to 460 mL. Hemodynamic monitoring showed a heart rate of 87 beats/min and a noninvasive blood pressure of 132/77 mmHg without vasoactive drugs. The pulse oxygen saturation was 97%. An arterial blood gas analysis was performed and the results were pH of 7.39, a partial oxygen pressure of 95 mmHg, a partial carbon dioxide pressure of 33 mmHg, and a base excess of −4.4 mmol/L.

Patient-ventilator asynchrony was suspected based on a mismatch between the flow and the airway pressure waveforms on the ventilator screen. Esophageal pressure monitoring was performed using a SmartCath-G catheter (LOT 7003300, CareFusion Co., San Diego, CA, USA) that can also be used for enteral feeding. Mechanical ventilation and esophageal pressure data were bedside displayed and collected by a dedicated acquisition system (VOXP Research Data Collector 3.2, Applied Biosignals GmbH, Weener, Germany) at 100 Hz. Figure 1 shows the flow, airway pressure, and esophageal pressure tracings at a ventilator machine rate of 20 breaths/min. Red dash lines indicated the onset of the patient’s inspiratory efforts. Reverse triggering with a stable 1:1 patient-ventilator entrainment pattern was diagnosed, indicating that one neural respiratory cycle was associated with one machine cycle (1). 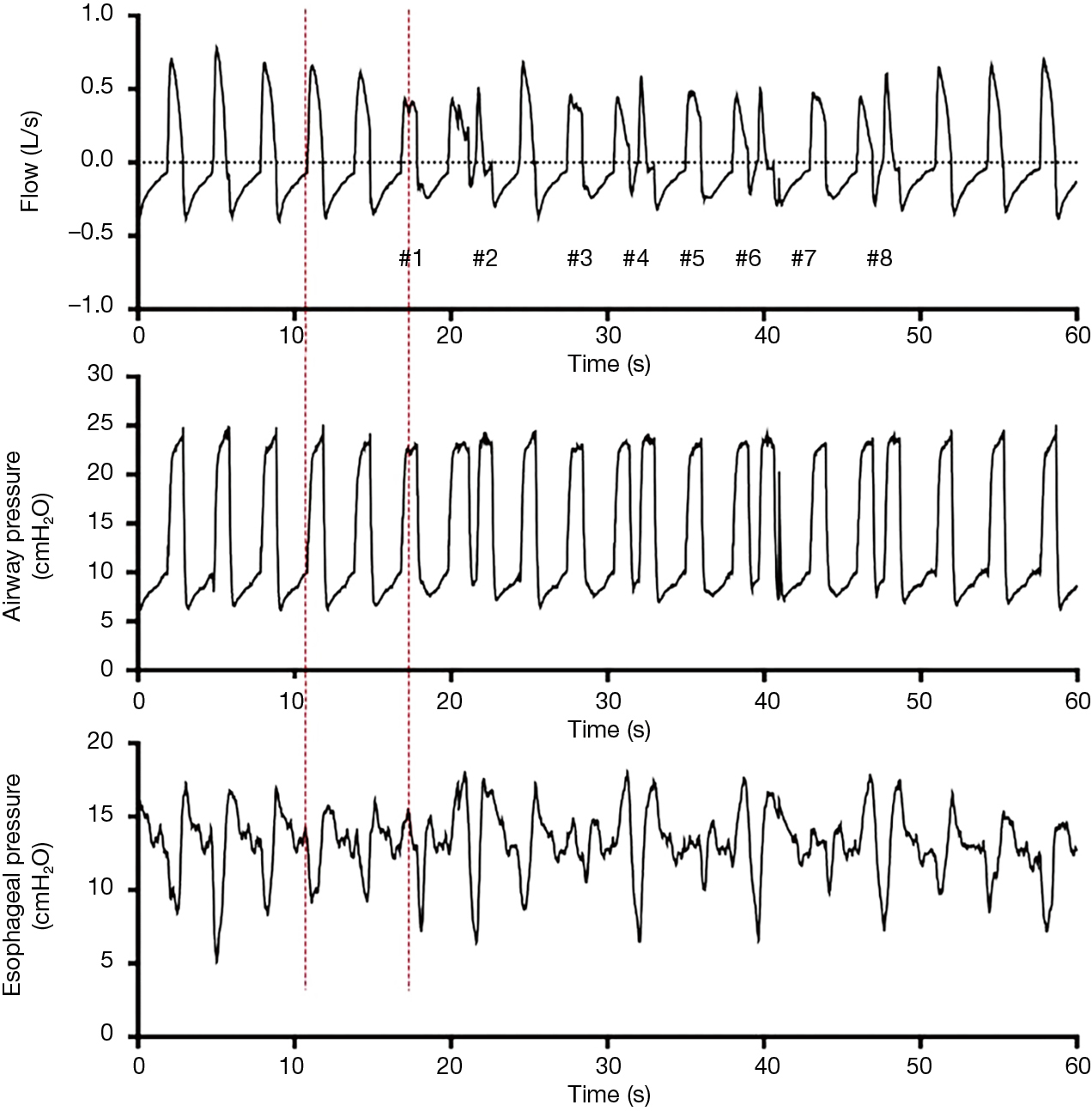 We decreased the machine’s respiratory rate to 18 breaths/min with no changes in the other ventilator settings. The patient-ventilator asynchrony pattern remained, but the percentage of reverse-triggered breaths fell to 30% (2). We further decreased the machine rate to 16 breaths/min, and entrainments were markedly reduced (Figure 2). During a 3-min observation period, 14% (7/50) of breaths were machine cycled, among which only two reverse-triggered breaths (4%) were found. Under this condition, the negative deflection in the esophageal pressure during the patient’s triggered breaths decreased from approximately 12 cmH2O at rate of 20 to 8 cmH2O at rate of 16. After the machine rate was set at 14 breaths/min, no reverse-triggered breath was identified during a 30-min period (3). The monitored respiratory rate stabilized at 14–16 breaths/min with the majority of breaths triggered by the patient. Without other changes in the ventilator settings, gradually decreasing the machine’s rate reduced reverse triggering, which was eventually eliminated until the machine’s rate was set below the patient’s spontaneous rate. 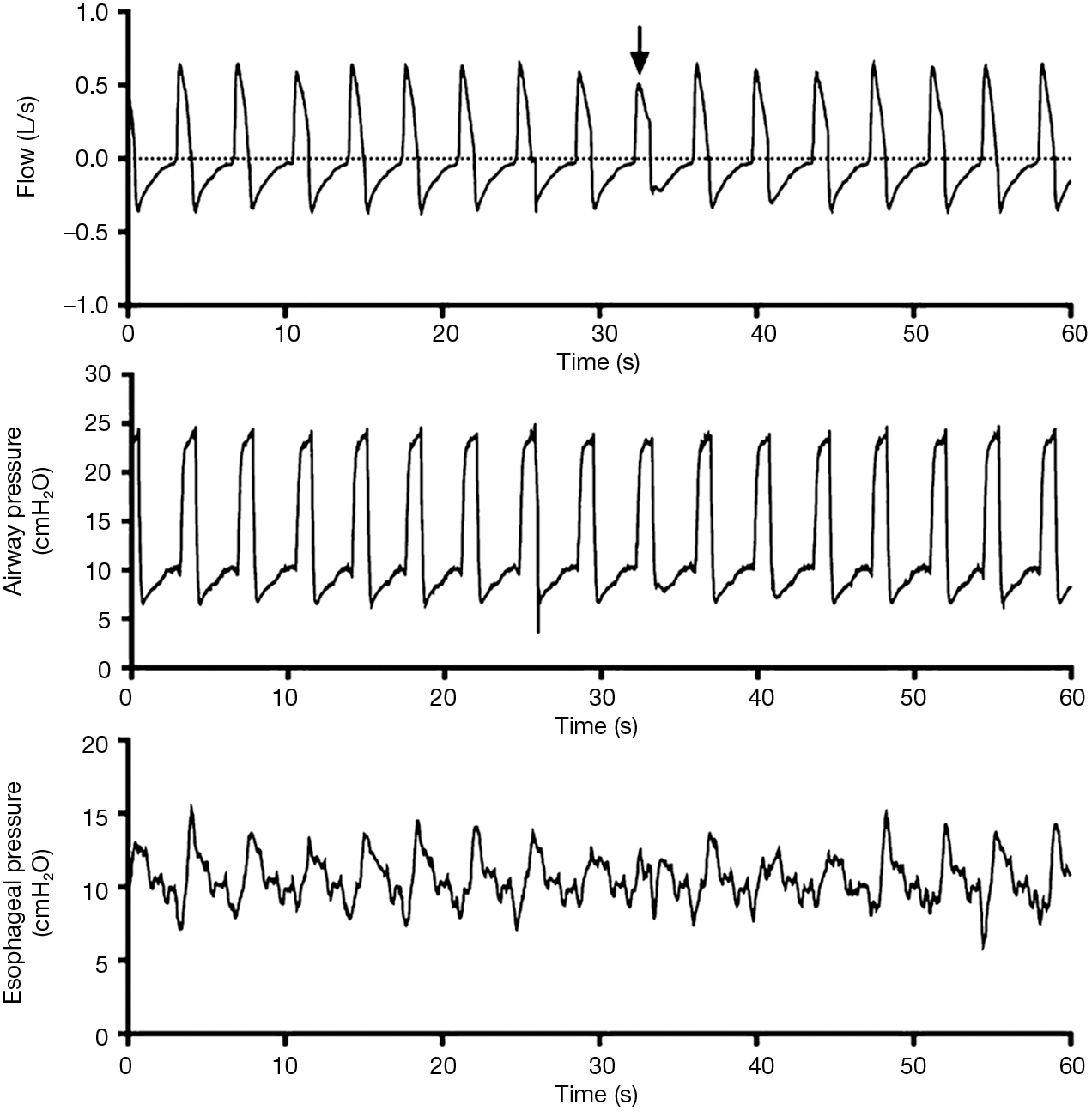 The pressure-controlled ventilation was maintained for 7 days at a respiratory rate of 10–14 breaths/min, and no obvious reverse triggering was found. The patient was then switched to pressure support ventilation and was weaned on the ninth day.

Patient-ventilator asynchrony is prevalent during mechanical ventilation and is associated with adverse outcomes, including prolonged duration of ventilation and length of stay in the intensive care unit as well as increased mortality (2-4). In 2013, Akoumianaki et al. (1) first reported reverse triggering as a new type of patient-ventilator asynchrony in eight patients with acute respiratory distress syndrome under deep sedation and assist-control ventilation. Asynchrony due to reverse triggering was reported in two brain-dead patients (5). To date, this type of asynchrony has been seldom reported and may frequently be unrecognized in mechanically ventilated patients.

It has been reported that neural efforts could be entrained by the ventilator in different entrainment ratios, namely the patient’s effort induced by one (1:1), two (1:2), or three (1:3) time-initiated inspirations (1,5). In the present case, reverse triggering occurred periodically at a fixed 1:1 ratio during entrainment periods (Figure 1). After each 8–10 patient-triggered cycle, 8–10 entrained breaths emerged during time-initiated cycles. Thus, reverse-triggered breaths accounted for approximately 50% of total breaths. Some entrained neural efforts triggered the ventilator, demonstrating a kind of breath stacking (8,10) (#2, #4, #6, and #8 breaths in Figure 1), whereas other efforts did not trigger the ventilator (#1, #3, #5, and #7 breaths in Figure 1). It was difficult to recognize the asynchrony by observing the ventilator screen waveforms.

The pathophysiological mechanisms of reverse triggering remain unclear. The Hering-Breuer reflexes, vagal nervous fibers, and cortical and subcortical influences seem to be responsible for neural inspiratory efforts entrained by the ventilator (5). In our patient, all reverse-triggered breaths were induced by the time-initiated cycles, while no entrainment occurred during the patient-triggered cycles. In other words, we did not find double triggering during the entire observation period (4). Although he was under deep sedation, our patient preserved spontaneous breathing. In patient-triggered cycles, the patient’s inspiratory effort was well matched by mechanical inspiration. But in time-initiated cycles, the ventilator delivered insufflation-induced inspiratory muscle contractility. The pattern of our reported reverse triggering raises questions for the investigation into the underlying mechanisms.

In conclusion, patient-ventilator asynchrony can occur under deep sedation. During assist-control ventilation, reverse triggering should be suspected. Monitoring of the esophageal pressure or the electrical activity of the diaphragm can confirm the diagnosis of reverse triggering. Reverse triggering may be eliminated by adjusting the machine rate or tidal volume, but these treatment strategies need to be further investigated.

Funding: This work is supported by the Beijing Municipal Science and Technology Commission (No. Z161100000116081).