Pulmonary torsion occurs when the entire lung or individual lobes rotate around the bronchovascular pedicle. This event is most commonly reported following chest trauma or thoracic surgery with an incidence rate of less than 0.2% of all patients undergoing thoracic surgery (1,2). Few cases of spontaneous whole-lung torsion have been reported in the literature. It may occur secondary to lobar collapse, pneumothorax, or pleural effusion (1) and is often associated with a congenitally absent inferior pulmonary ligament. Early detection and treatment is critical as this condition is potentially fatal secondary to hemorrhagic infarction and respiratory failure (3).

A 79-year-old woman presented with a 2-week history of progressive dyspnea, fatigue, and weakness. Her past medical history included treatment with pomalidomide for intraocular diffuse large B-cell non-Hodgkin’s lymphoma progressing to the cerebellum. She had no cough, hemoptysis, sputum production, or chest pain prior to this presentation. She was found to have a right pleural effusion on chest computed tomography (CT). The patient underwent a thoracentesis with removal of 600 mL of serous fluid that was exudative by LDH criteria, but negative for malignancy or infection. A repeat CT of the chest 5 days later showed recurrence of the right pleural effusion in addition to right upper lobe collapsed due to right lung torsion (Figure 1). The right upper lobe was rotated inferomedially with signs of abscess formation. Both right middle and upper lobes were rotated superiorly with the right lower lobe occupying much of the superior aspect of her chest. This constellation of findings is indicative of a clockwise rotation of the lung around the right hilum. Subsequent V/Q scan demonstrated decrease in right lung perfusion and ventilation when compared to the left, indicative of vascular and ventilation compromise. 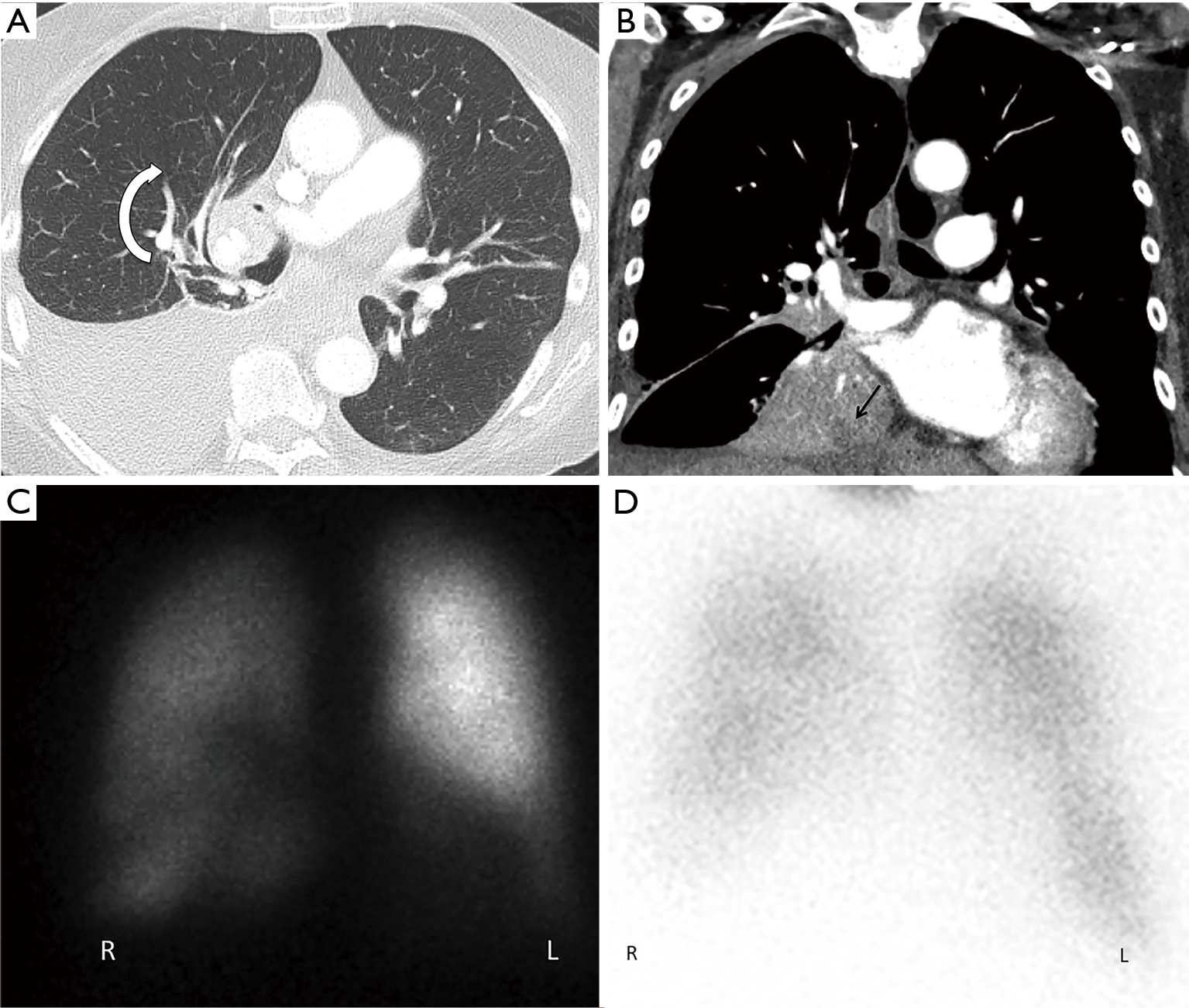 Bronchoscopy revealed purulent material in an externally compressed right upper lobe bronchus as well as torsion of the bronchus intermedius, middle lobe and lower lobe bronchi (Figure 2). Labs were notable for mildly elevated alkaline phosphatase of 167 and AST at 51. 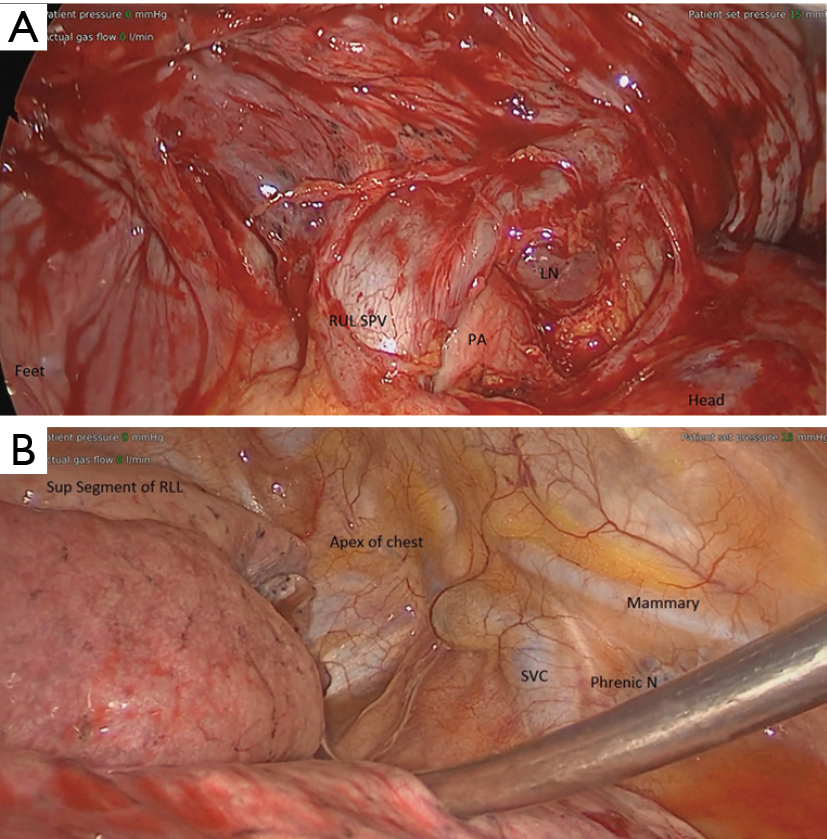 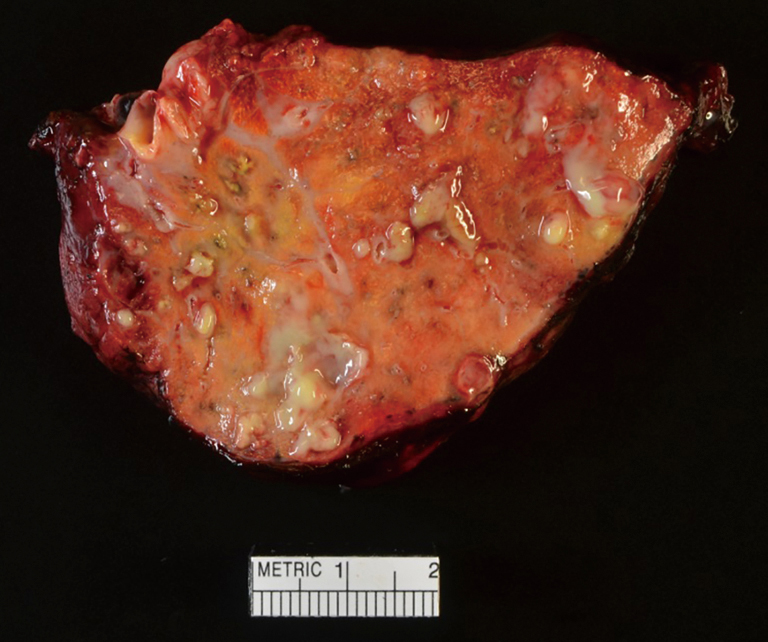 The patient returned one month later for a routine visit. She did not require any pain medications at the time of discharge and encountered no post-operative complications. A chest X-ray taken 5 weeks postoperatively showed well-expanded remaining lungs.

Pulmonary torsion is a rare but potentially fatal event requiring prompt diagnosis. There have been 4 cases of spontaneous whole-lung torsion reported in the literature since 1988 (4-7). The presumed related etiology of each of these cases involved pneumonia or lung adenocarcinoma (Table 1). The presenting symptom was dyspnea in three of the reported cases, however, Irie et al. [2014] reported a patient presenting with leg edema and pain. Spontaneous whole-lung torsion has occurred in both males and females between the ages of 51 and 82 (4-7) (Table 1).

This condition is best diagnosed with CT of the chest (2,8). Radiographic indications of lung torsion include hilar displacement, a collapsed or consolidated lobe in an abnormal position, change in the location of pulmonary vasculature, bronchial cutoff or distortion, and lobar air trapping (1). In our case, bronchoscopy was also used as a diagnostic tool. Early detection of a torsed lung is important to prevent hemorrhagic infarction, gangrene, or death with a mortality rate of 22% (2,3).

Emergency lobectomy of the compromised lobe is required to prevent further complication. In our case, the right upper lobe had developed abscesses, which made the removal of this lobe essential. In cases where the torsed lobe has not developed an abscess, salvage by detorsion of the lobe carries the risk of ischemia-reperfusion injury and thus lobectomy is recommended in all cases of lobar torsion (2). Our technique of using a minimally invasive VATS lobectomy proved successful in managing this case of spontaneous pulmonary torsion.