Hemorrhage of a pancreatic metastasis from lung adenocarcinoma after osimertinib therapy

Osimertinib is an epidermal growth factor receptor tyrosine kinase inhibitor (EGFR-TKI). It is used as anti-cancer therapy in patients with EGFR-TKI sensitizing mutations and EGFR T790M mutations and is recommended for treatment of patients with EGFR T790M-positive advanced non-small cell lung cancer (NSCLC) after progression on first-line EGFR-TKIs or frontline treatment in EGFR mutation-positive (exon 19 deletion or L858R) advanced NSCLC (1,2). Common adverse effects of osimertinib are similar to other EGFR-TKIs and are generally mild in severity and reversible (1). Previous reports have suggested an association between gefitinib or erlotinib treatment and organ bleeding or tumor hemorrhage (3-8). But to date there have been no reports of a similar association between osimertinib and tumor hemorrhage. Herein, we report an unusual case of hemorrhage of a pancreatic metastasis from lung adenocarcinoma after osimertinib therapy.

A 73-year-old female non-smoker was referred to our hospital due to growing lung tumors despite gefitinib treatment. Seven years before admission, she received gefitinib treatment for lung adenocarcinoma in the right upper lobe with multiple lung metastases harboring EGFR mutations including exon 19 deletion and exon 21 L858R (clinical stage IV, TMN classification seventh edition) (9). Following gefitinib treatment, she had achieved a partial response for 6 years. However, at the time she was referred to our institution, chest computed tomography (CT) showed the regrowth of a solitary 2.2 cm lung nodule and non-growing pure ground glass nodules in the right upper lobe (Figure 1). Whole body CT and positron emission tomography/CT did not show lymph node involvement or distant metastases. 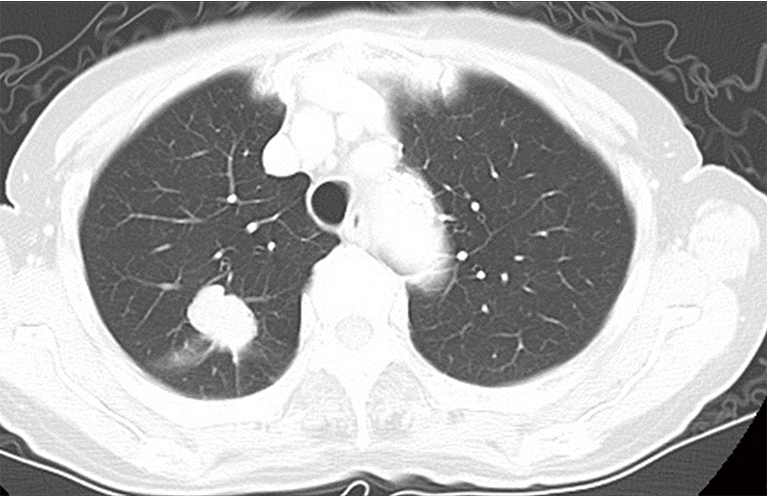 Figure 1 Chest computed tomography (CT) at the time when the patient was referred to our hospital. CT showed a solitary 2.2 cm lung nodule in the right upper lobe.

She was diagnosed with lung cancer, ycT1bN0M0, stage IA, and underwent right upper lobectomy and systematic lymph node dissection. The pathological diagnosis was papillary adenocarcinoma, with elements of adenocarcinoma in situ and minimally invasive adenocarcinoma in the same lobe [pathological stage: ypT1b(m)N0M0, stage IA]. Notably, the EGFR T790M mutation was identified in the surgical specimen. After surgery, the patient was doing well and did not receive any adjuvant treatment because there were no evaluable diseases and osimertinib was not available at the time. Ten months after surgery, a brain metastasis developed and stereotactic radiation therapy was performed. Twenty-two months after surgery, contrast enhanced abdominal CT revealed a pancreatic tumor (Figure 2A) and endoscopic ultrasound-guided fine needle biopsy identified the tumor as a pancreatic metastasis from lung adenocarcinoma containing the EGFR T790M mutation. She was treated with osimertinib at a daily dose of 80 mg, resulting in marked metastatic tumor regression.

Six months after administration of osimertinib, she complained of upper abdominal pain and tarry stool. This patient did not have any comorbidities or receive any medication that may increase the risk of bleeding. Blood chemistry showed anemia without coagulopathy and the platelet count was in the normal range. Contrast enhanced abdominal CT revealed metastatic tumor regression and hemorrhage in the accessory pancreatic duct (Figure 2B). Upper endoscopy showed active bleeding from the papilla of Vater (Figure 2C). We suspected hemorrhage from the pancreatic metastasis and stopped osimertinib. Bleeding control by endoscope or angiographic embolization was difficult and the patient was therefore treated conservatively with multiple blood transfusions. Fortunately, the bleeding spontaneously stopped. The patient is still alive and has had no recurrent bleeding at 3 years after surgery but has had progression of the brain metastasis.

The T790M mutation is one of the EGFR mutations that causes EGFR-TKI resistance. Based on the results of phase III clinical trials, osimertinib has been recommended for treatment of NSCLC patients with the T790M mutation whose disease has progressed on other EGFR-TKIs or frontline treatment in EGFR mutation-positive (exon 19 deletion or L858R) advanced NSCLC (1,2). The common adverse effects of osimertinib are similar to other EGFR-TKIs, and involve the skin (e.g., rash, dry skin, paronychia, and pruritus), gastrointestinal tract (e.g., diarrhea, nausea, and decreased appetite) and liver. Among the patients receiving osimertinib treatment, these events occur less often and milder in severity than those receiving other EGFR-TKIs (1,10).

EGFR-TKIs, including osimertinib, have only rarely been considered to increase the risk of organ bleeding. Some recent reports have described organ bleeding, such as diffuse alveolar hemorrhage, subdural hemorrhage, and gastrointestinal bleeding, and have suggested an association with gefitinib or erlotinib treatment (3-7). Yan et al. reported two cases of hemorrhage from brain metastases after gefitinib treatment for NSCLC; one case occurred 1 month after gefitinib combined with whole brain radiation therapy and the other case slowly developed hemorrhage within brain metastases after 8 months of gefitinib monotherapy (8). Although it is unclear if these reported hemorrhages were specifically due to EGFR-TKIs therapy, it is possible that EGFR-TKIs increase the risk of bleeding. In an in vitro study, Guillamo et al. reported that gefitinib had an antiangiogenic effect on tumor cells with the EGFR mutation (11). Avascular necrosis or post-ischemic hemorrhage due to EGFR-TKIs therapy could explain the hemorrhage from metastatic tumors.

This case is uncommon in the point of the indolent EGFR mutant disease with a long disease progression free period. We chose surgery for the regrowth of the pulmonary nodule without EGFR-TKI treatment after biopsy for the following reasons: First, osimertinib treatment was not available when the regrowth of the pulmonary nodule was observed; Second, the regrowth of the lung nodule was limited at the right upper lobe and therefore we considered it as oligo-recurrence. The local treatment may be associated with better survival for oligo-recurrence patients (13). In the present case, we thought that the surgery was an acceptable therapeutic option. Furthermore, harboring the compound mutation of exon 19 deletion and exon 21 L858R is also uncommon. It was reported that the incidence of this compound mutation is 0.5% to 1.6% among EGFR mutation-positive lung adenocarcinoma (14,15) and the efficacy of EGFR-TKI may differ from single mutation (14-16).